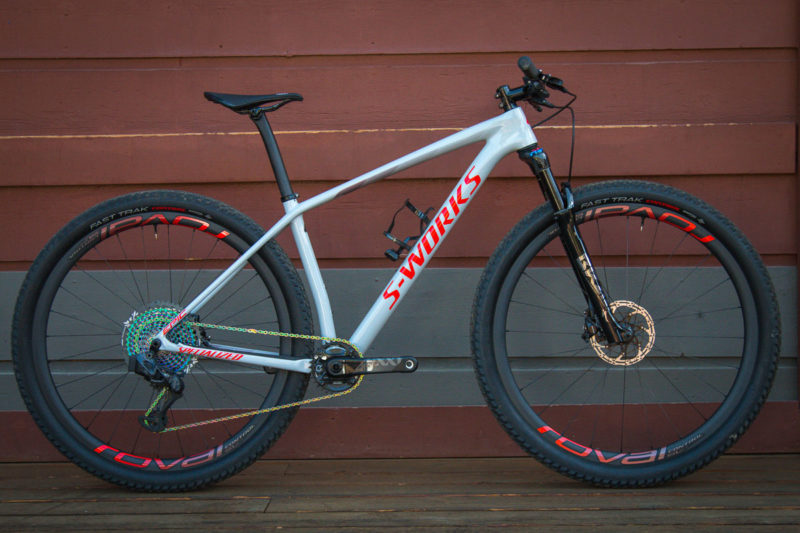 What makes the ultimate XC hardtail? For years it seemed to be the combination of super light weight and razor sharp handling. But now that XC courses and mountain biking overall have evolved, those older hardtails are starting to feel a bit dated. Specialized knew the new Epic HT had to be light, but more importantly it had to be capable. 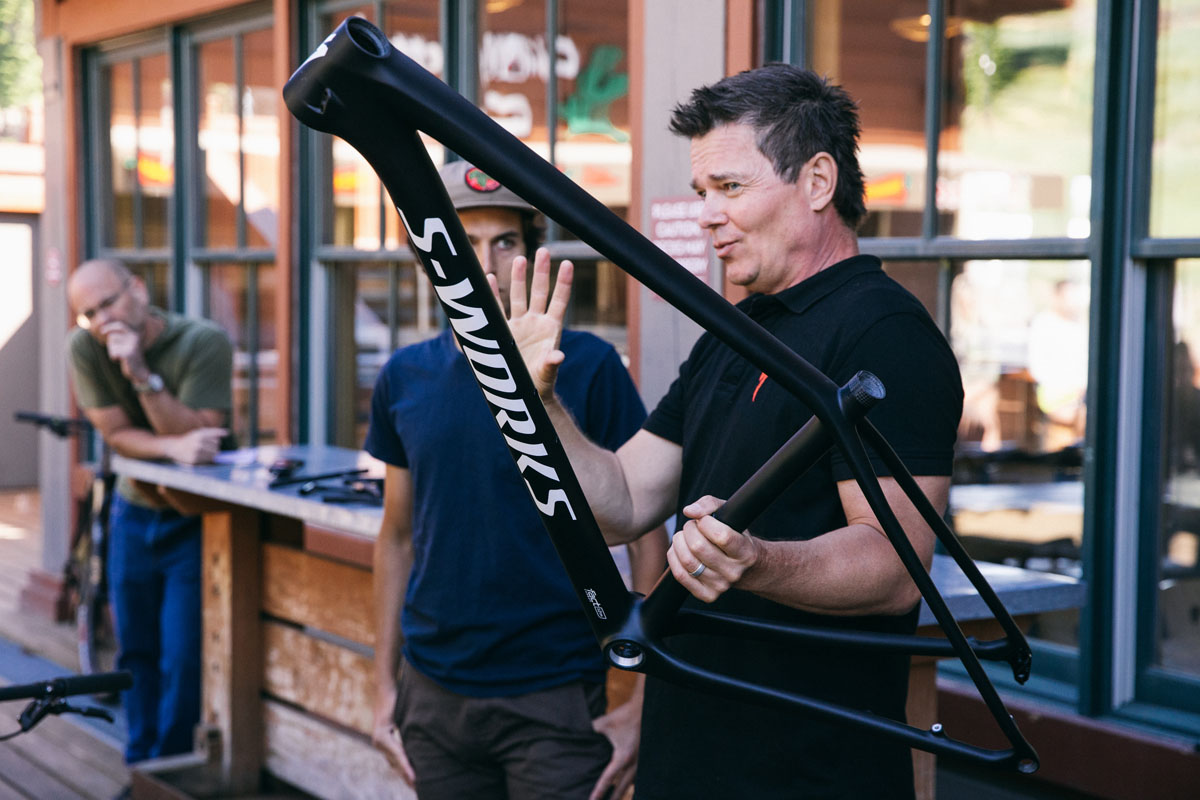 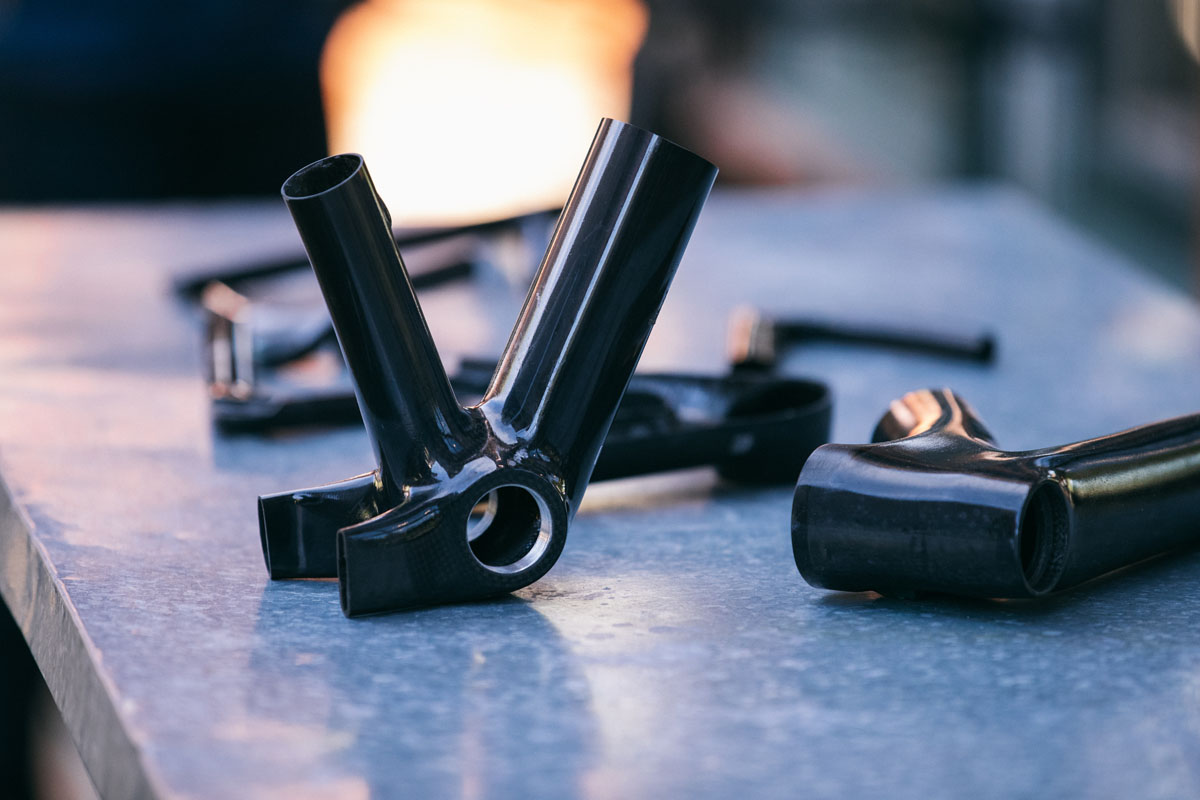 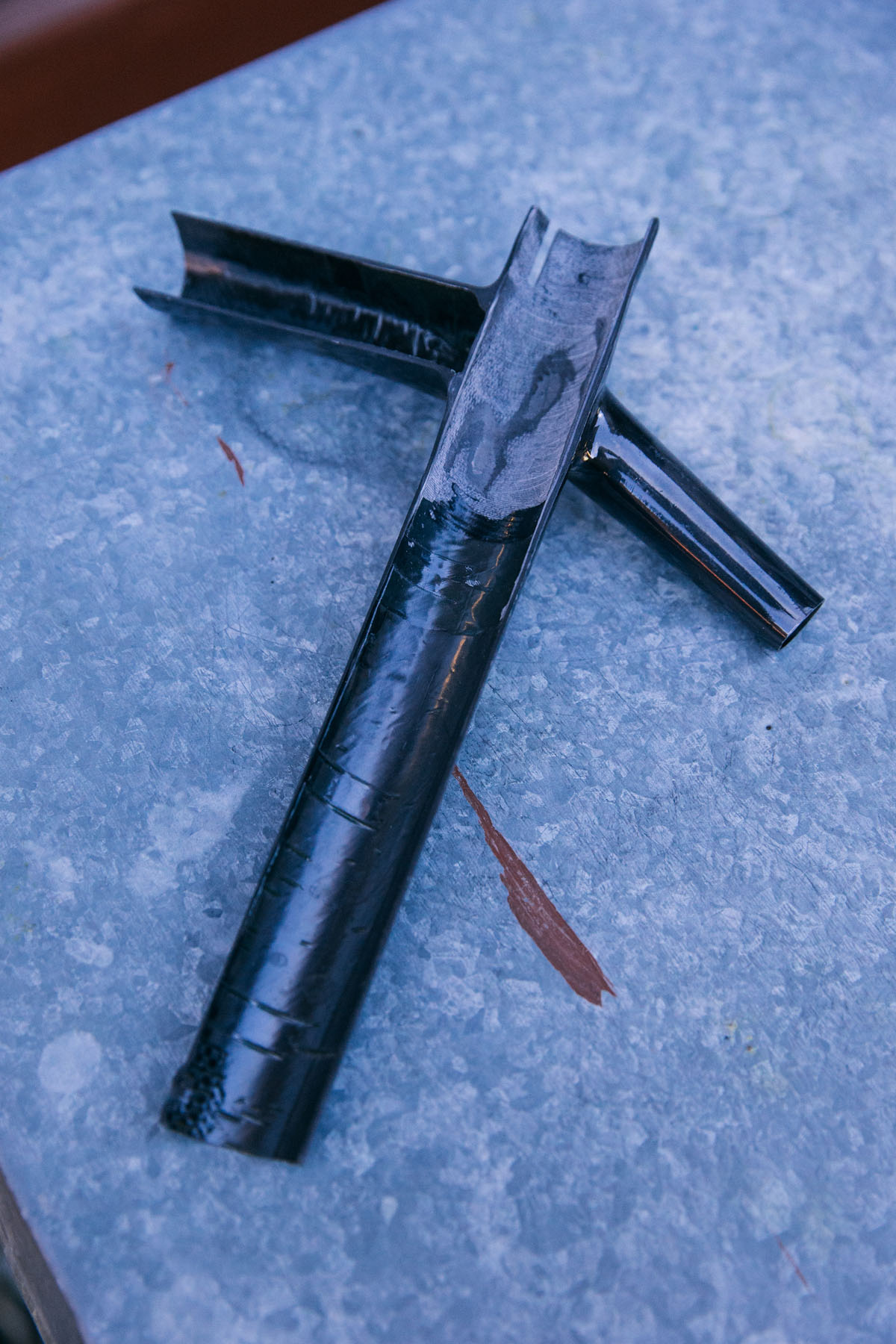 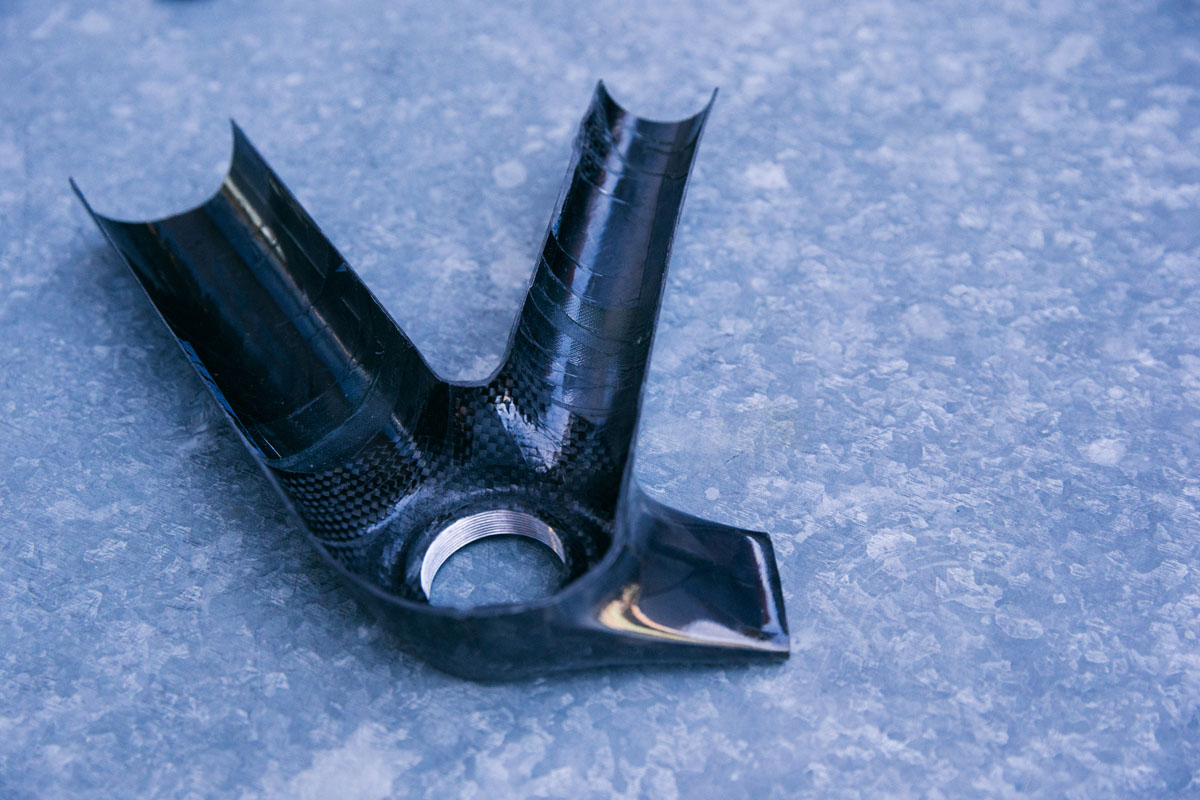 As the Lead Carbon Engineer for the project, Peter Denk stated that the weight of the frame was just a coincidence. Initially, all of their efforts were focused on the ride quality. The frame ended up benefiting from a massive carbon fiber research project that was started by Specialized for another bike. But that research illustrated that they could make do with fewer overlaps of the carbon plies in order to reduce weight without sacrificing strength. 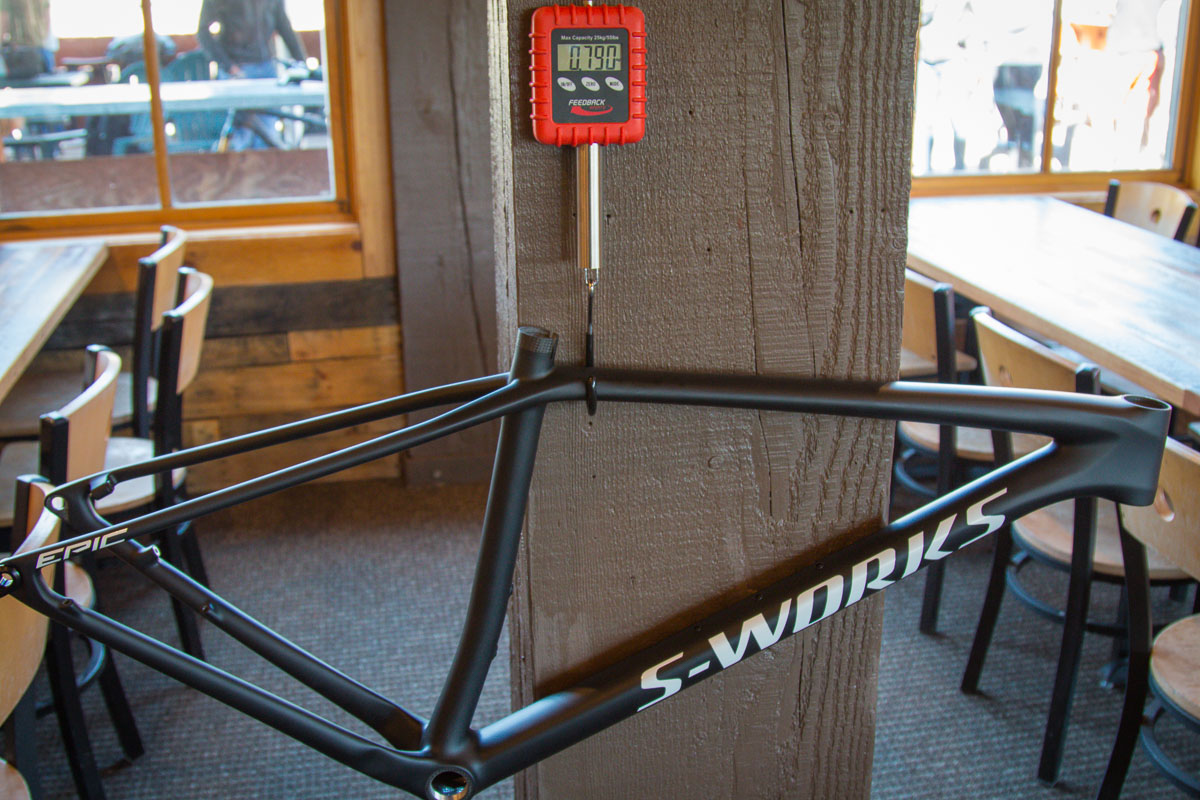 Thanks to advanced software that helped them to figure out the carbon layups and resin placement, Specialized ended up with a more comfortable frame. One that weighs just 790g (medium without thru axle). 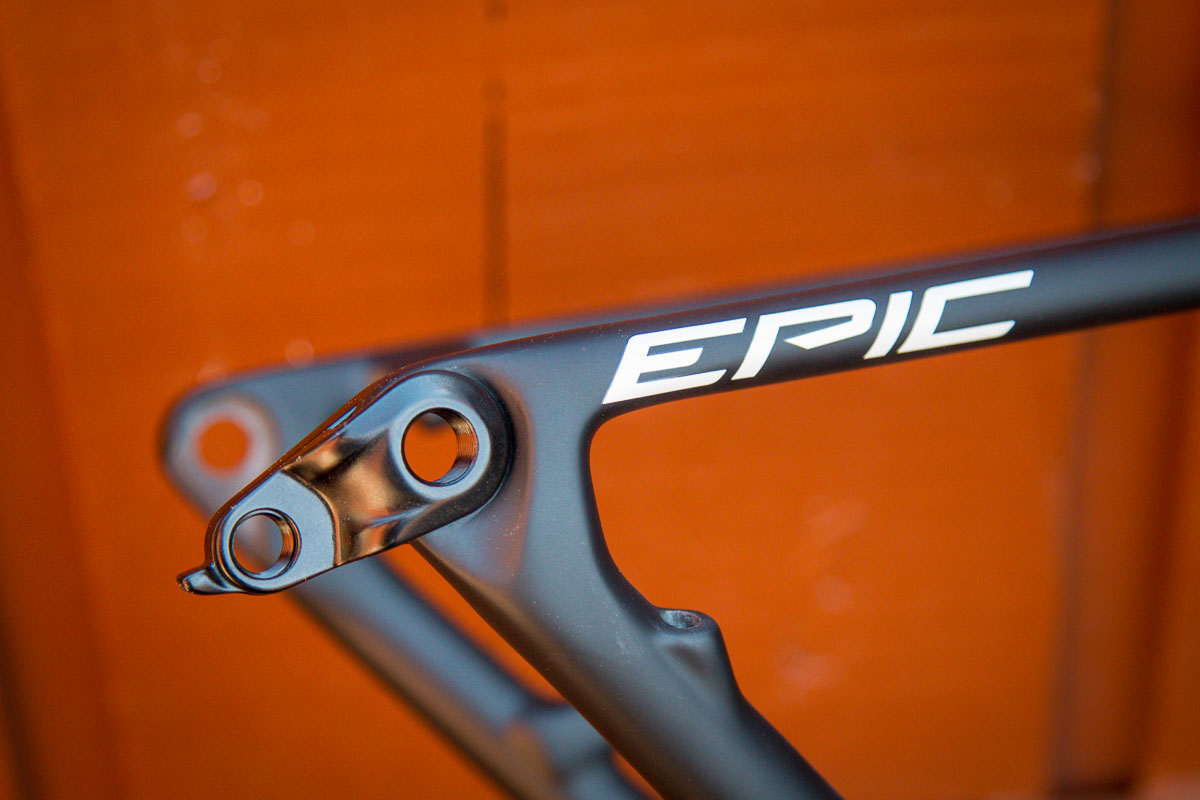 In addition to the changes in the carbon fiber layup itself, the frame also has a few changes to the design which shed a few grams. The dropouts have gotten smaller and Specialized removed the aluminum inserts. 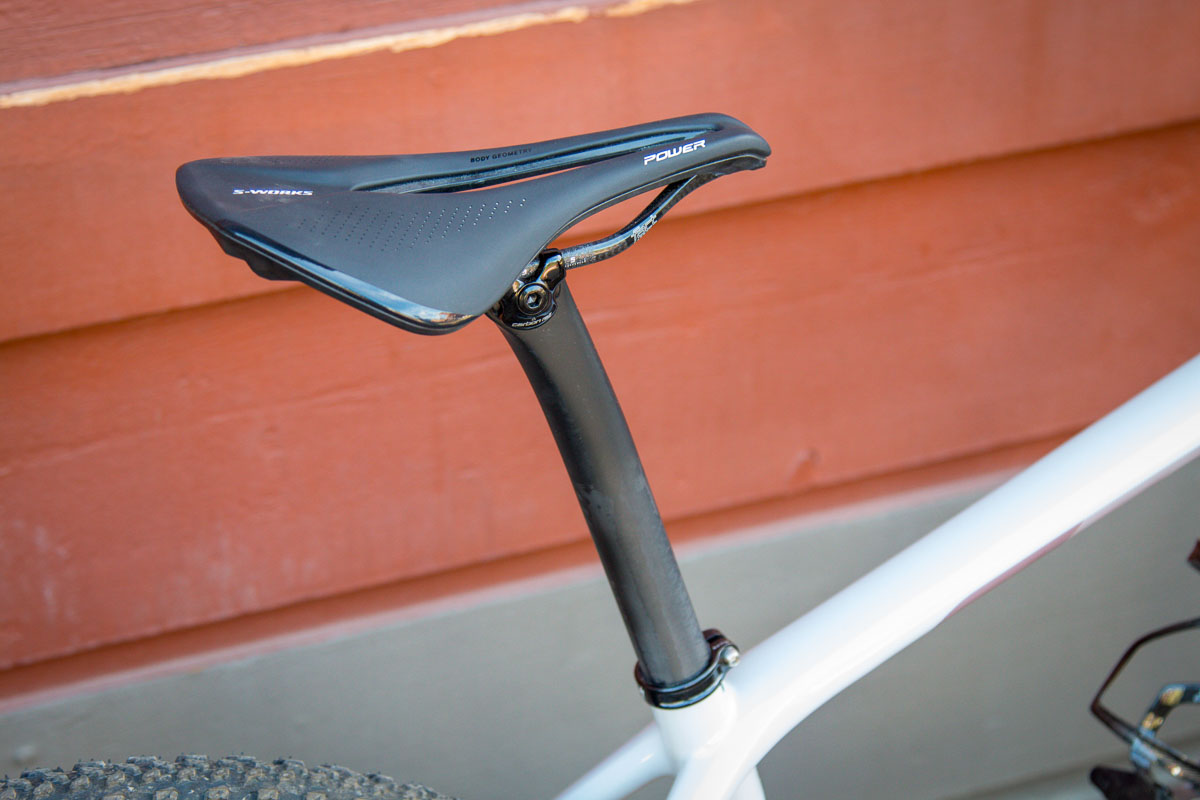 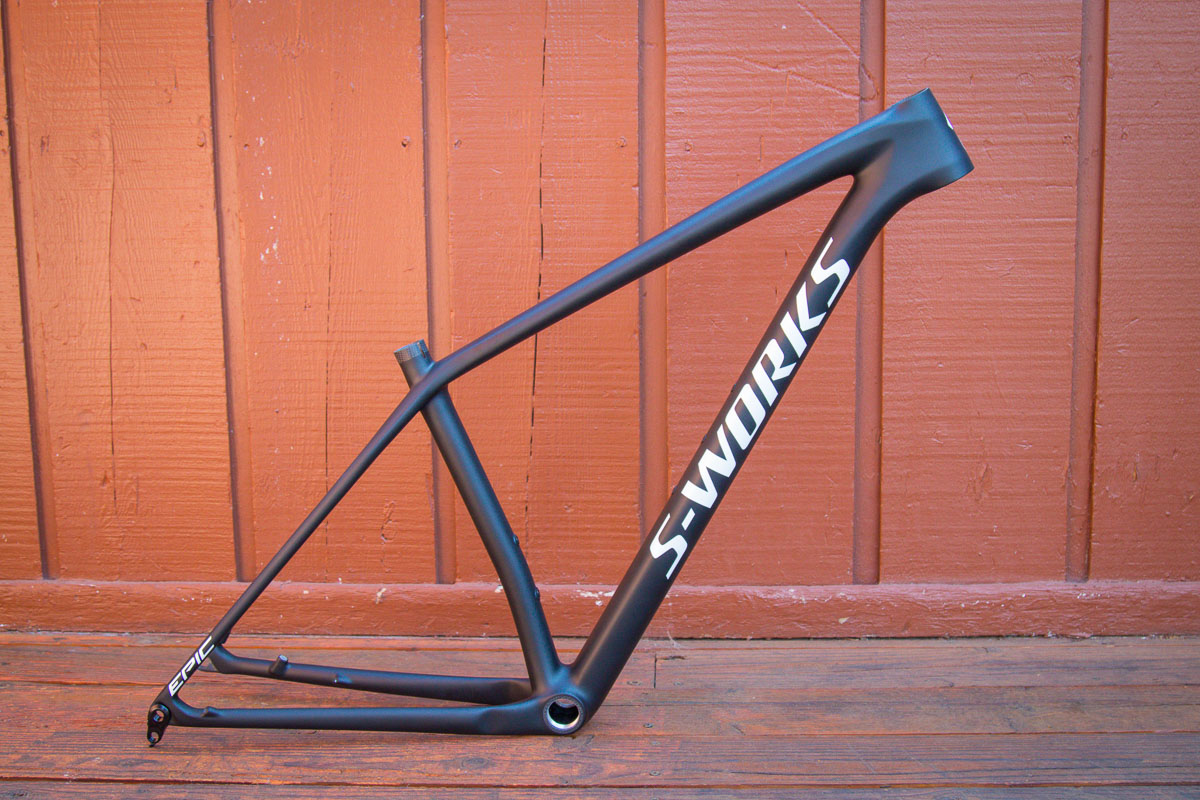 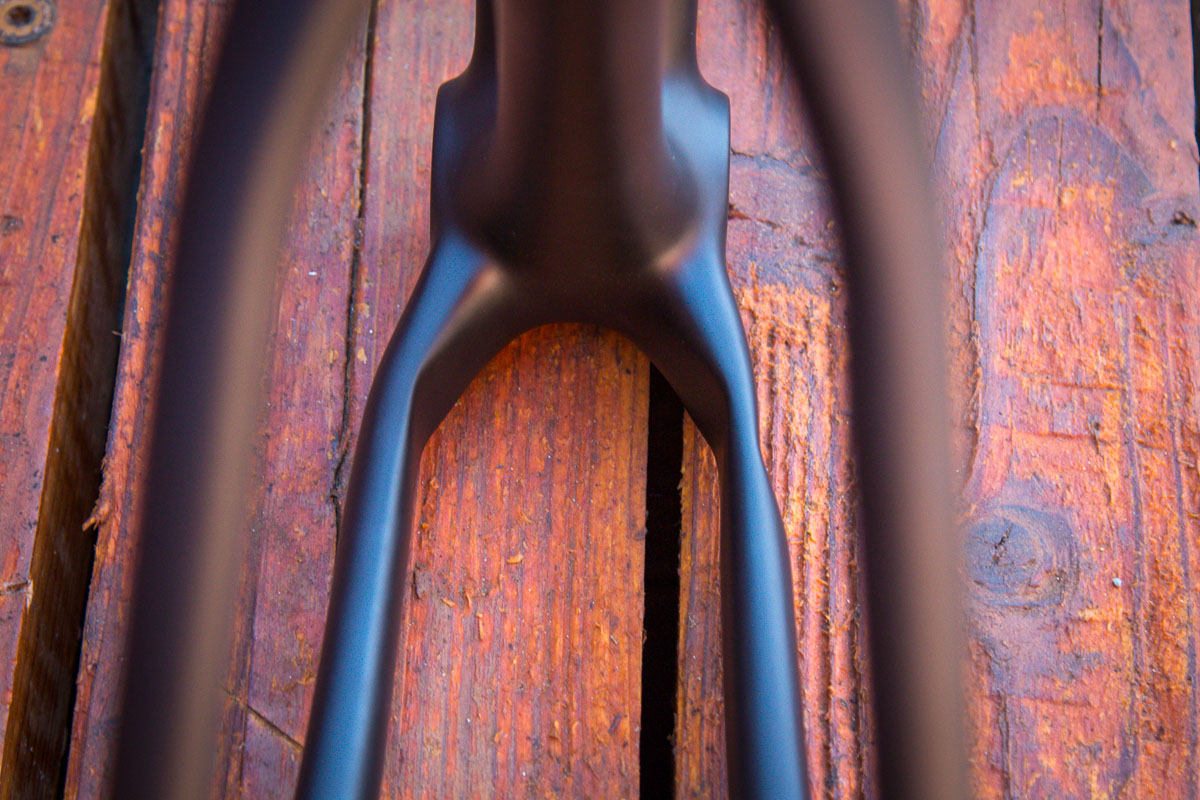 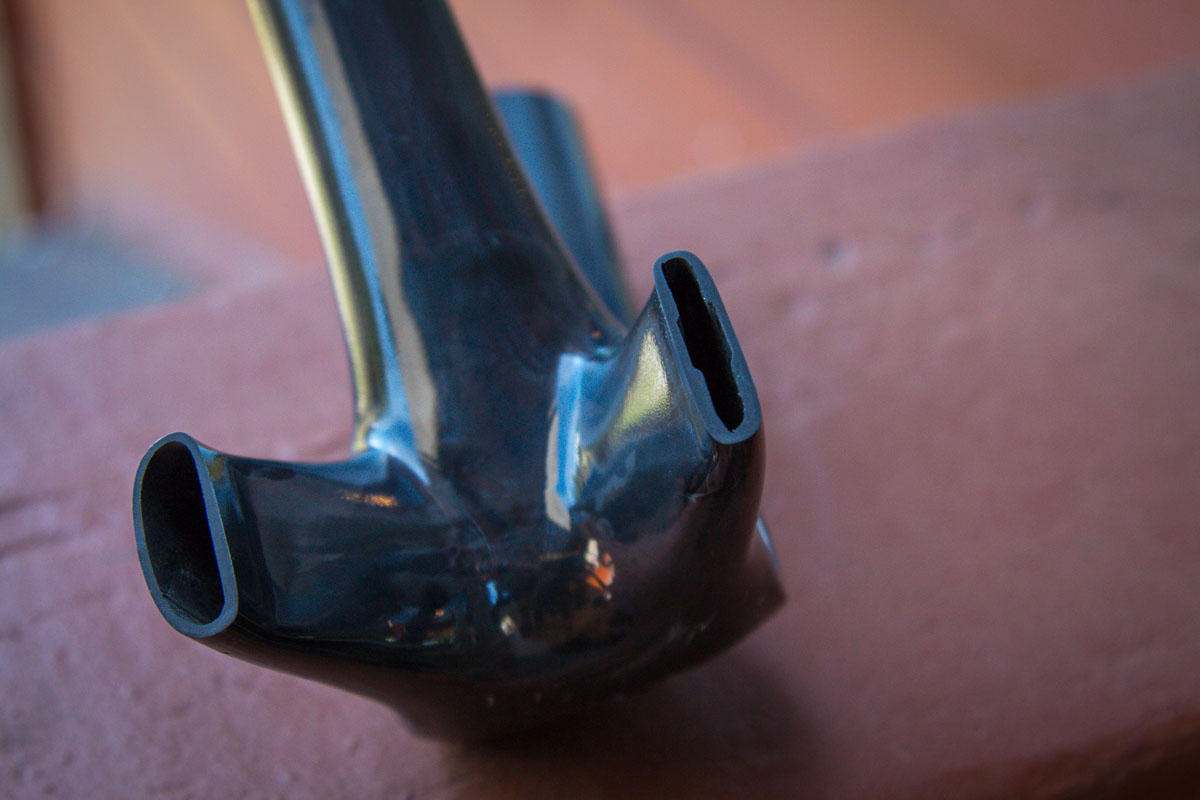 The driveside chainstay had to be made super narrow to clear the drivetrain and the tire, so Specialized molded in a center opening for the derailleur cable.

A new curved seat tube does a few things. One, it helps to make up for compliance lost by moving to a 30.9 seat post. The 30.9 will allow more dropper posts to be used (and their 30.9 dropper is actually 30g lighter than 27.2), but it’s also less comfortable than a 27.2 post. Specialized says that the new seat tube design makes up for this difference thanks to a reduction of the size of the junction between the BB and the seat post and changing some of the carbon angles from 45 to 70°. It also hugs the rear tire which makes room for more tire clearance – in this case 29 x 2.3 or 2.4″ depending on the tire and wheel combination. 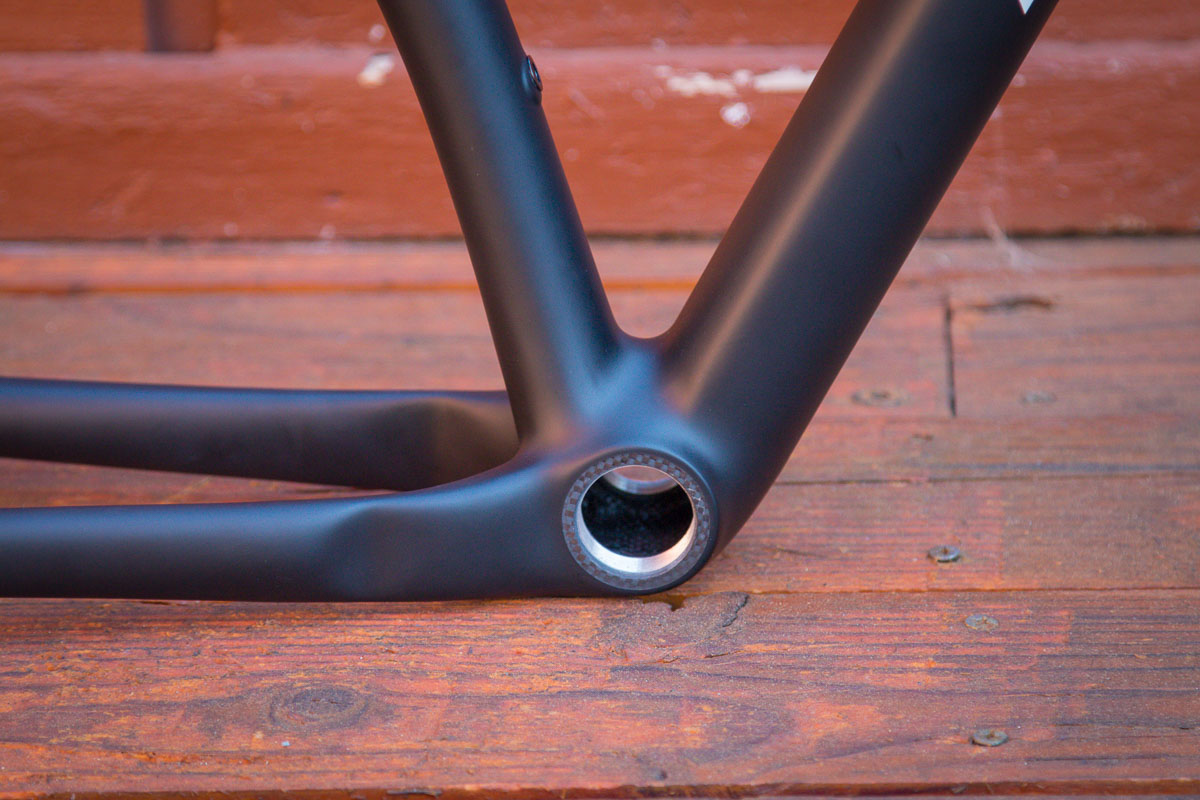 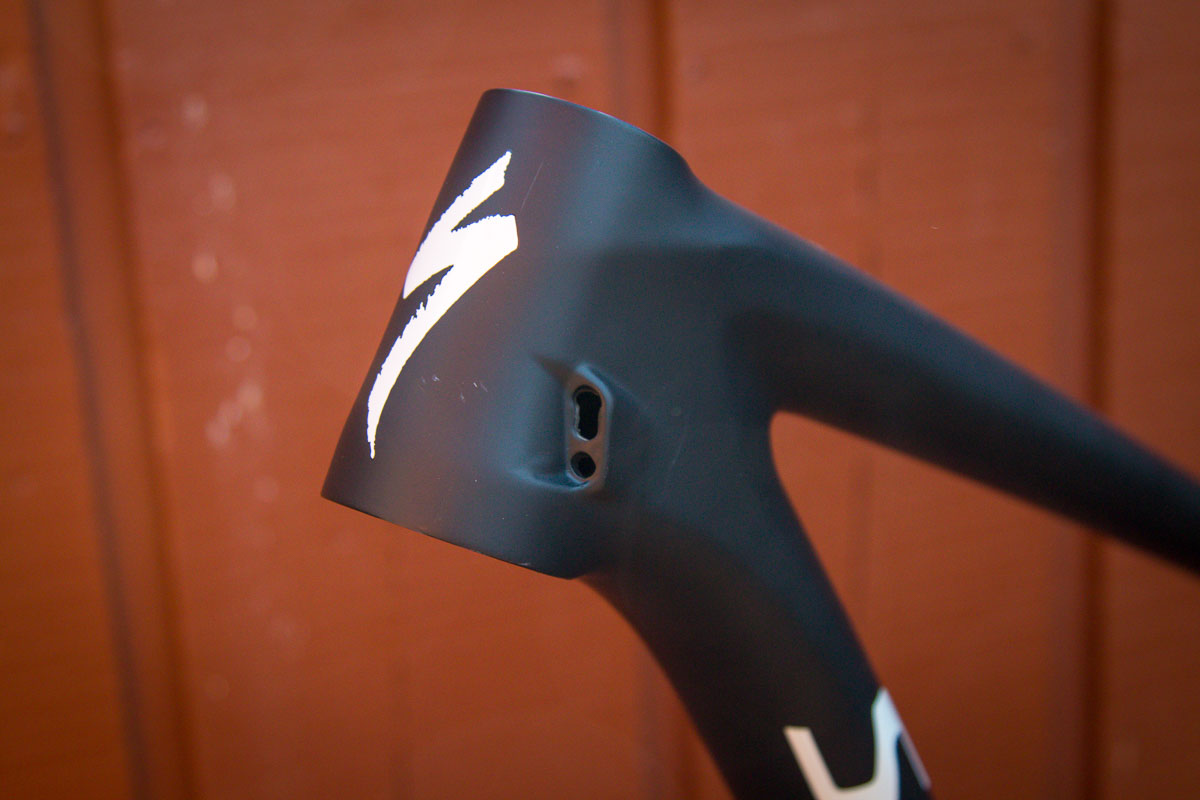 The frame is now 1x only now, and runs a threaded bottom bracket. Denk pointed out that using a PF bottom bracket would have made the frame another 30g lighter, but they wanted to keep it threaded for user serviceability. Cable routing is internal without guided tunnels but also without any extra small parts. Instead, the cables are wrapped in foam tubes with housing run back to front and a plastic sleeve over the BB. 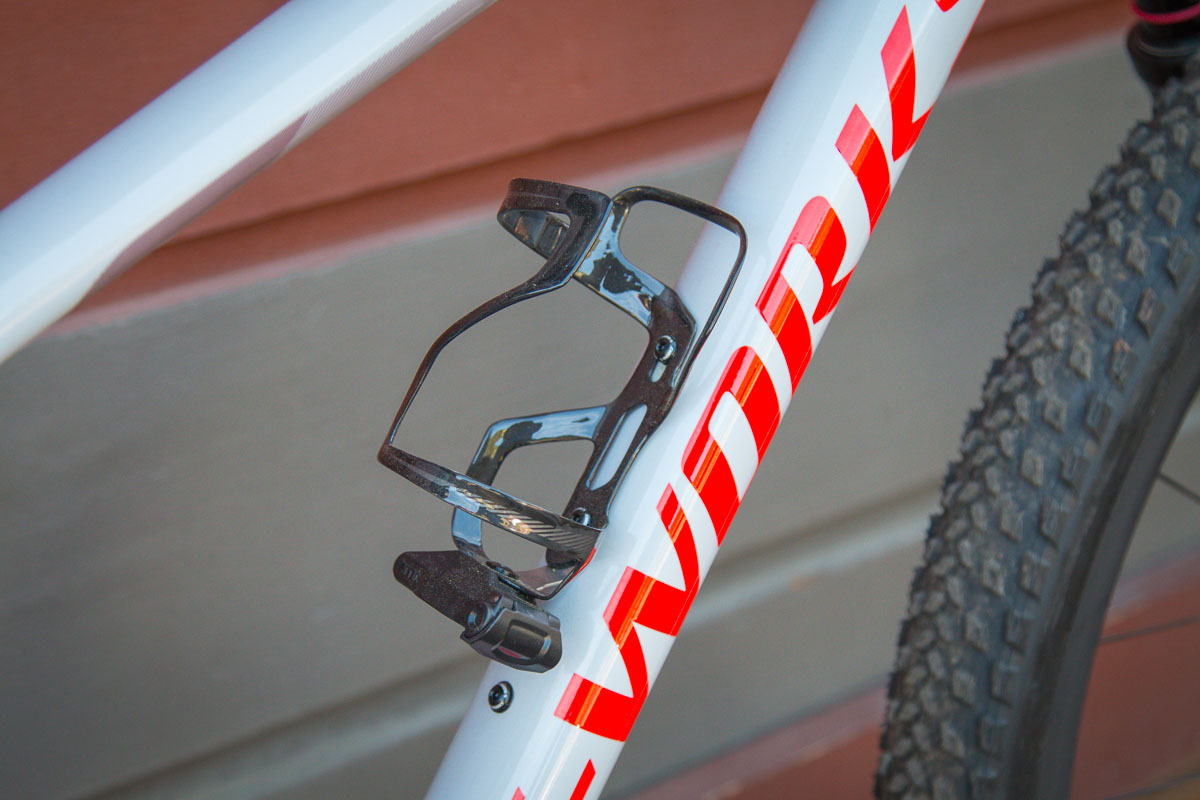 Frames include two bottle cage mounts inside the front triangle with a three pack mount on the down tube. 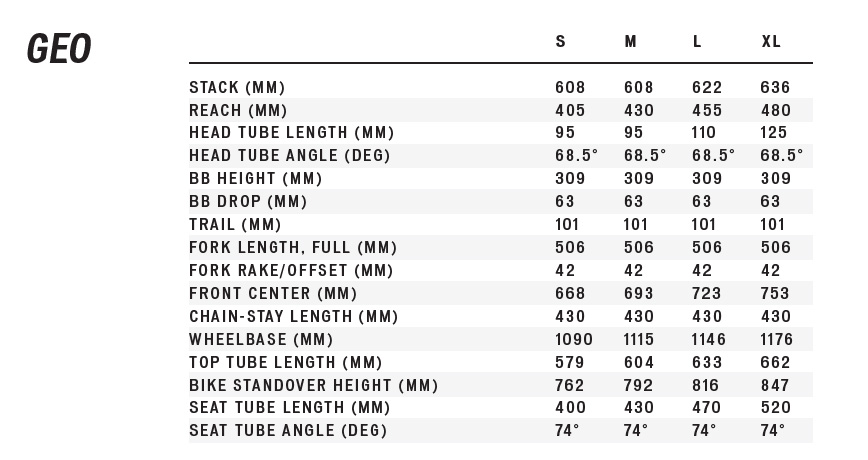 Along with the changes in frame design there is also a big change in geometry. The new Epic features a longer reach with staggered reach increases across the size run (the bigger the frame, the more the reach has increased). The front center has grown along with the reach increases, but the Epic now runs a 42mm offset fork with a 68.5° head tube angle to keep the handling crisp. 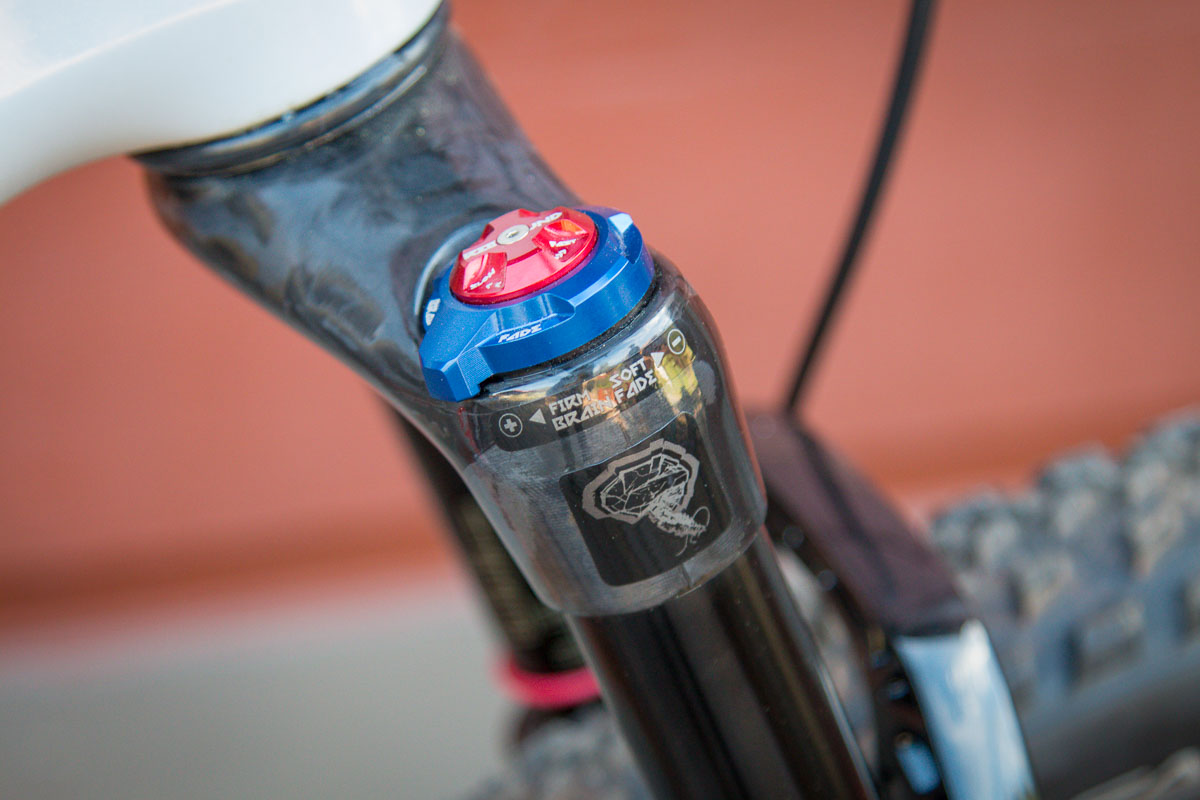 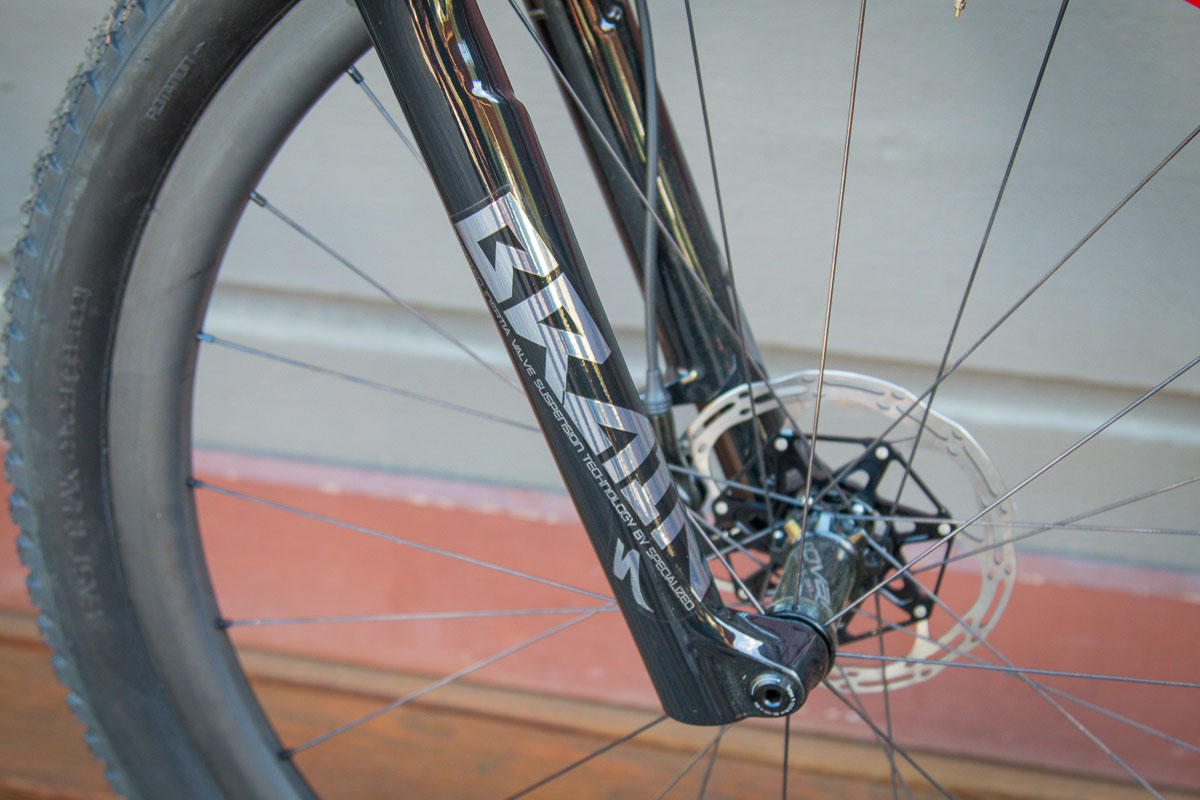 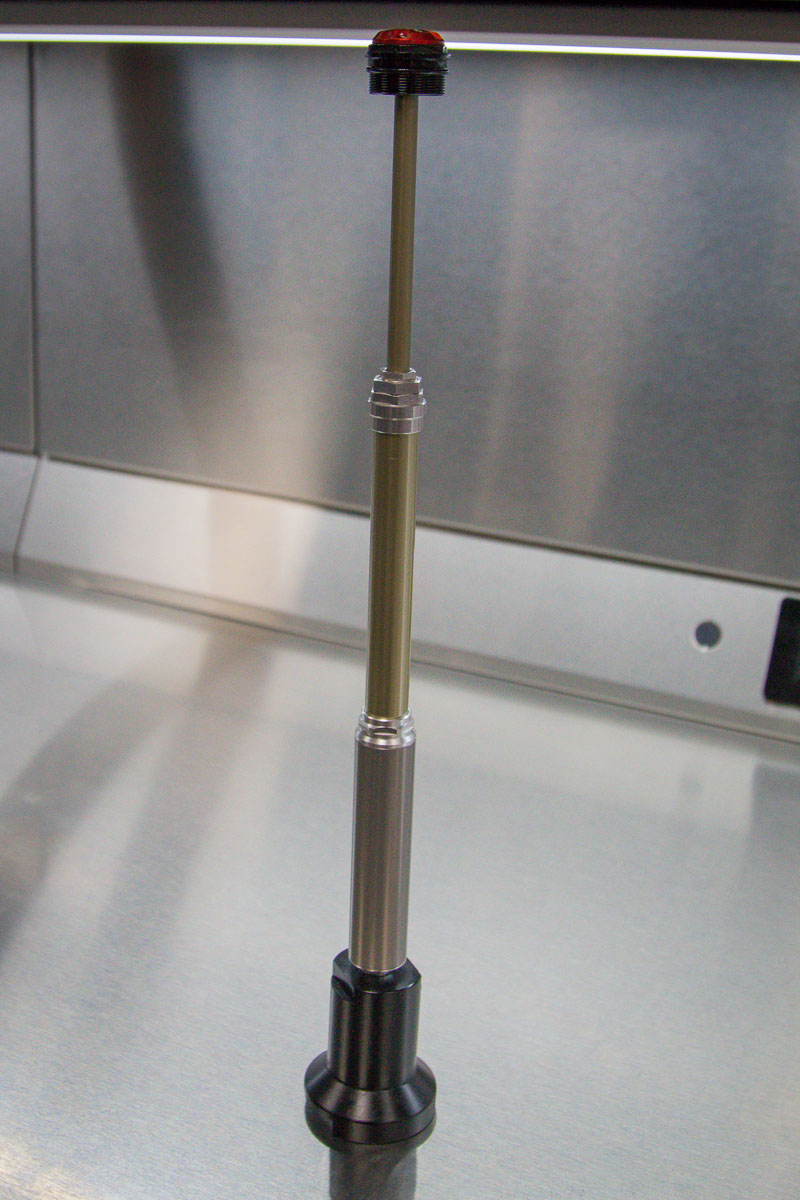 If I only had a (new) Brain

The fork is also noteworthy as it features a new position sensitive Brain valve. The sealed damping cartridge uses a brass mass that sits on top of the cartridge which allows the first 20-25mm of travel to float freely before hitting the platform damping. This allows the fork to absorb small bumps while still remaining efficient. It’s also engineered so that when you’re sprinting, your weight is over the front of the bike which compresses the fork and pushes against the platform to eliminate bob when out of the saddle. 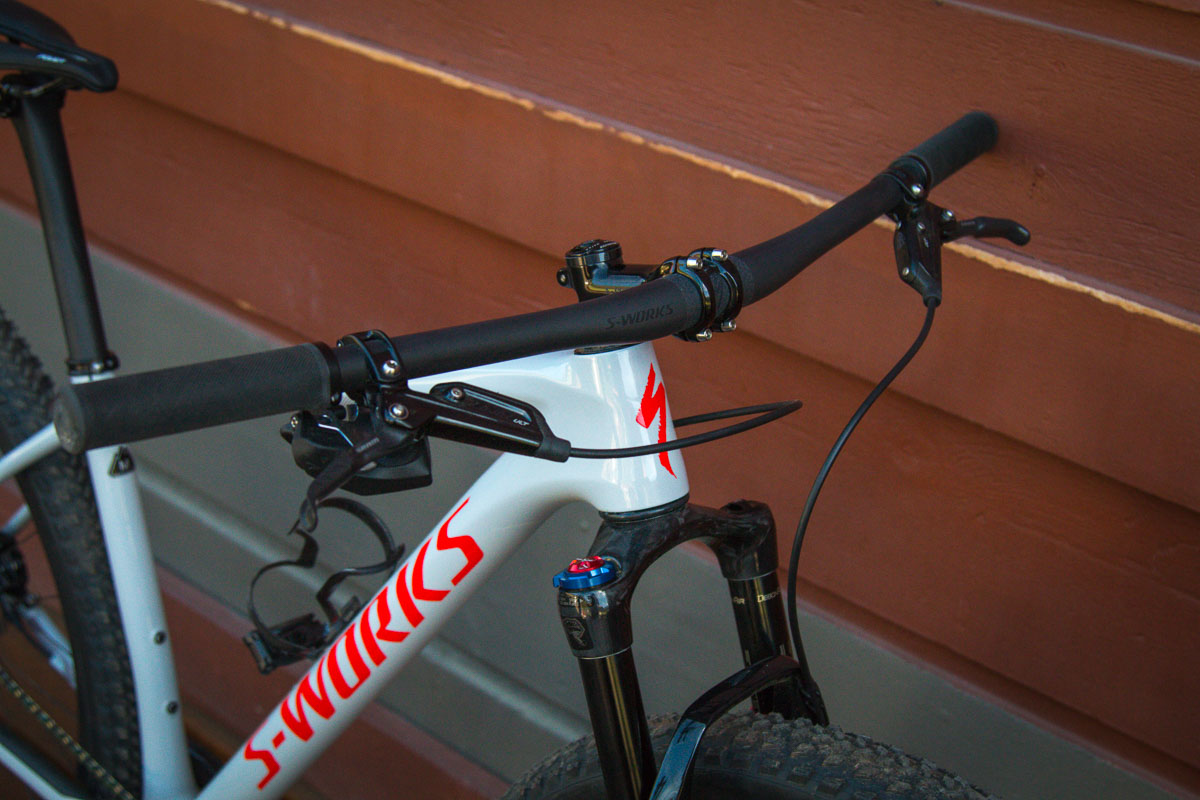 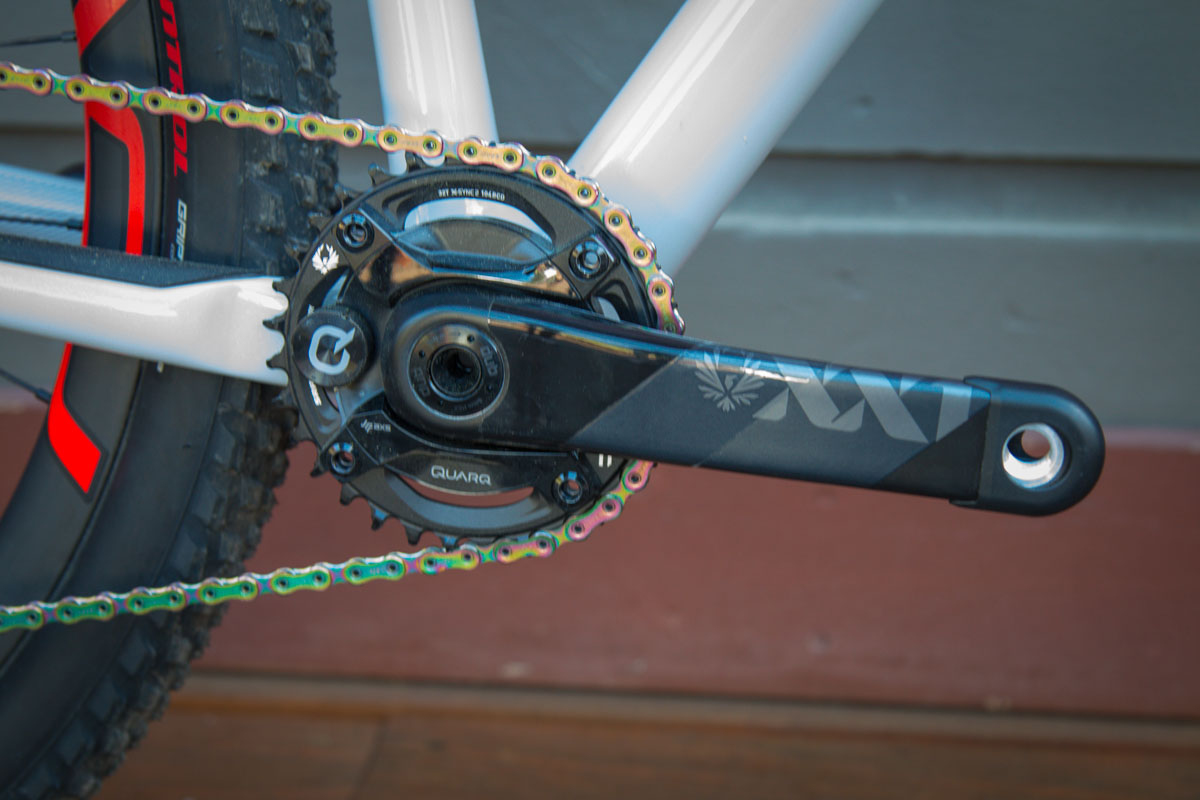 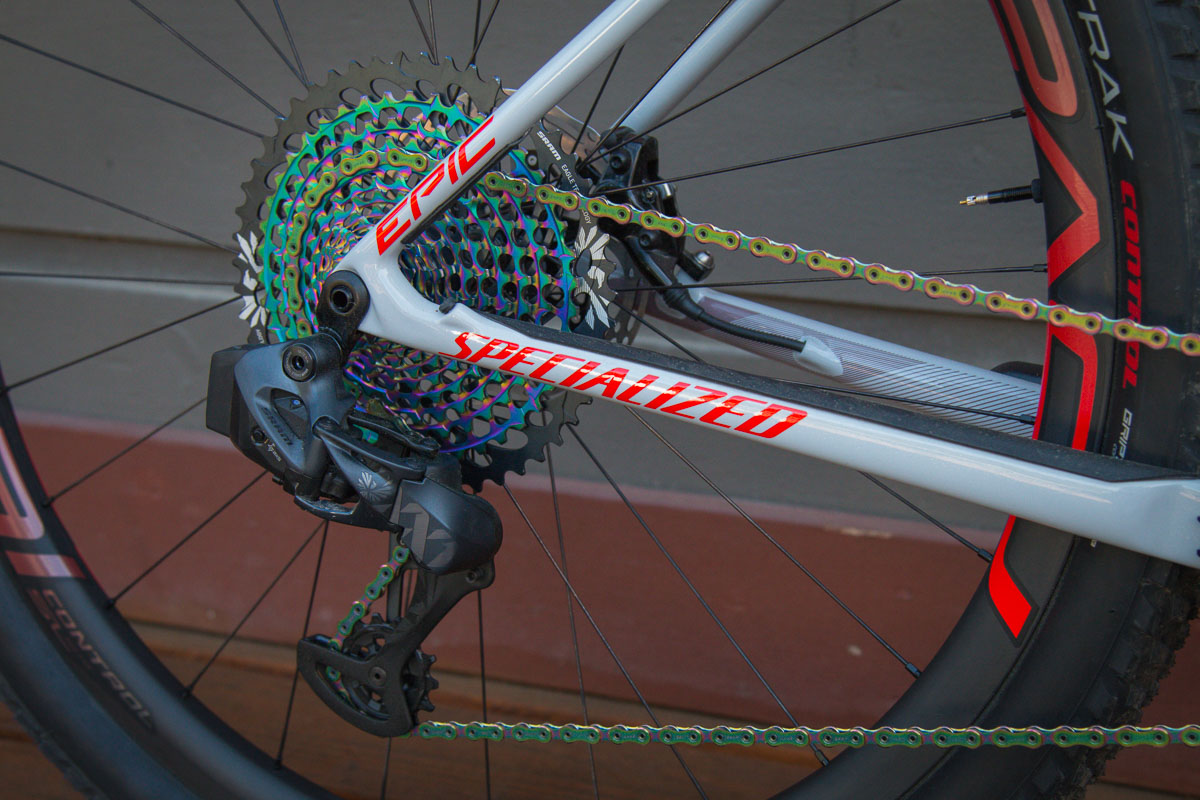 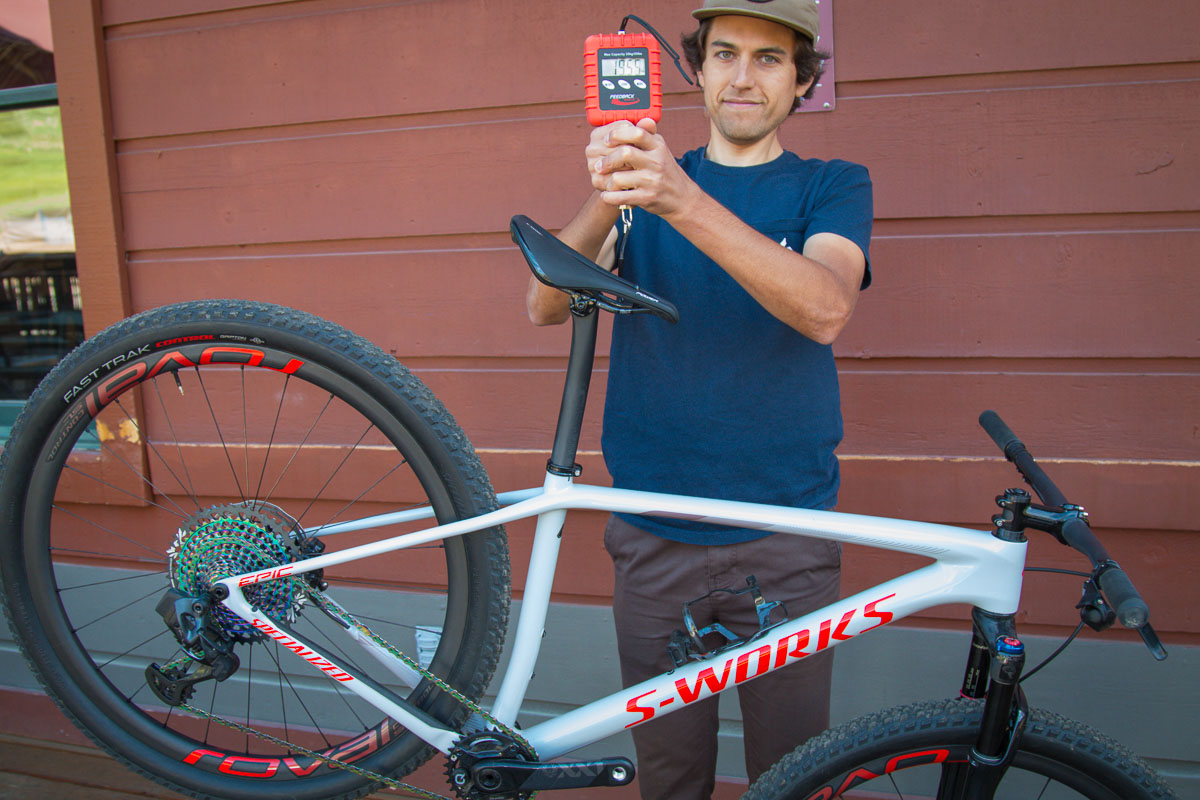 Many of the bikes will include new Fast Trak 2.3″ tires with new CONTROL casings. Specialized claims this will reduce pinch flats by 20% with minimal effect on the rolling resistance. The 29 x 2.3″ tire has a claimed weight of 675g. 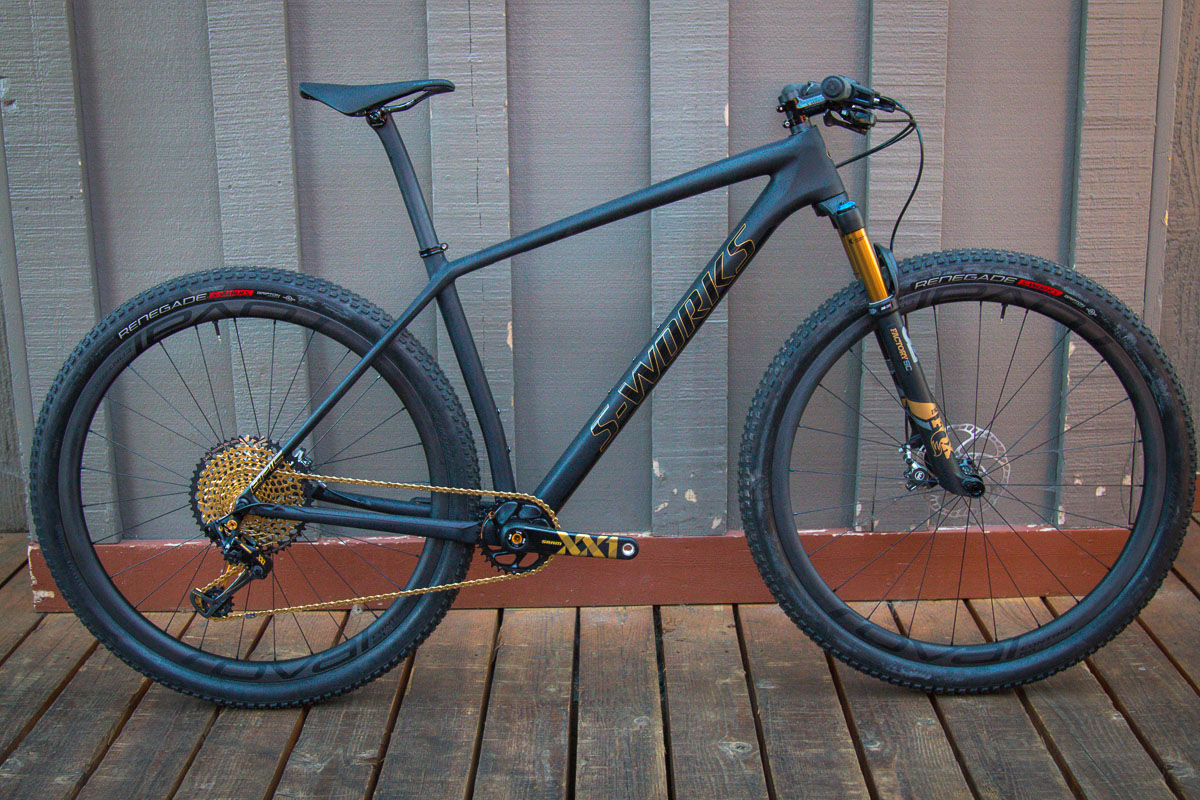 There will be seven different complete Epic HT models which will have one of two different frames. The top end S-Works model will feature the FACT 12M carbon frame, while the Pro, Expert, Comp, and Carbon 29 will use the FACT 11M frame which is 140g heavier. Pricing starts at $2,110 for the Carbon 29 and tops out at $9,510 for the S-Works SRAM version. An S-Works frame only kit will sell for $2,500. 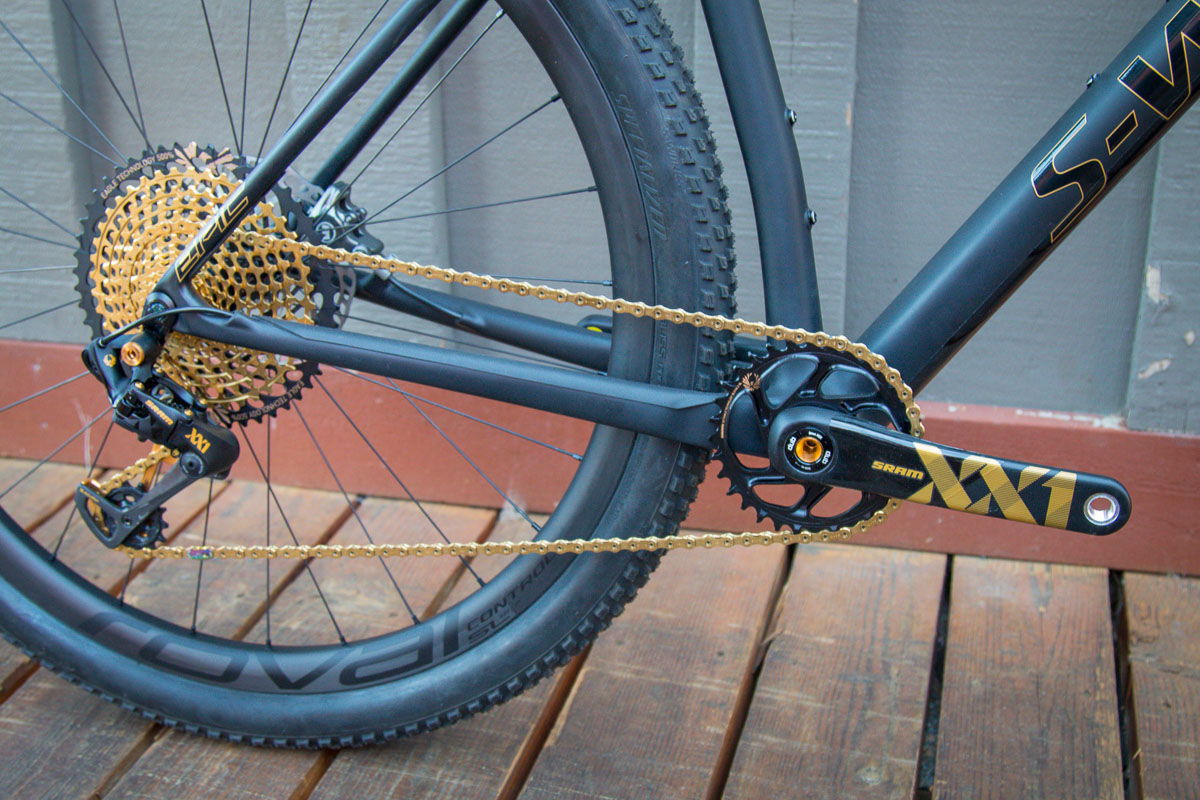 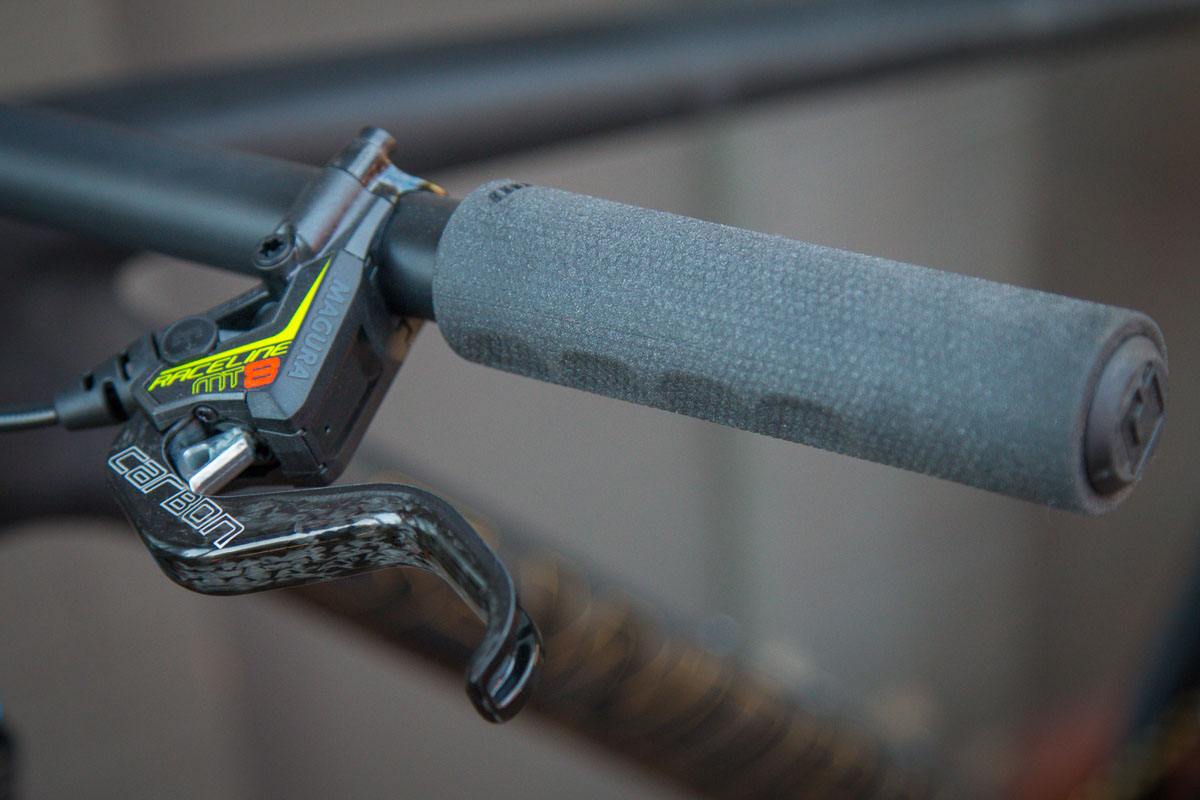 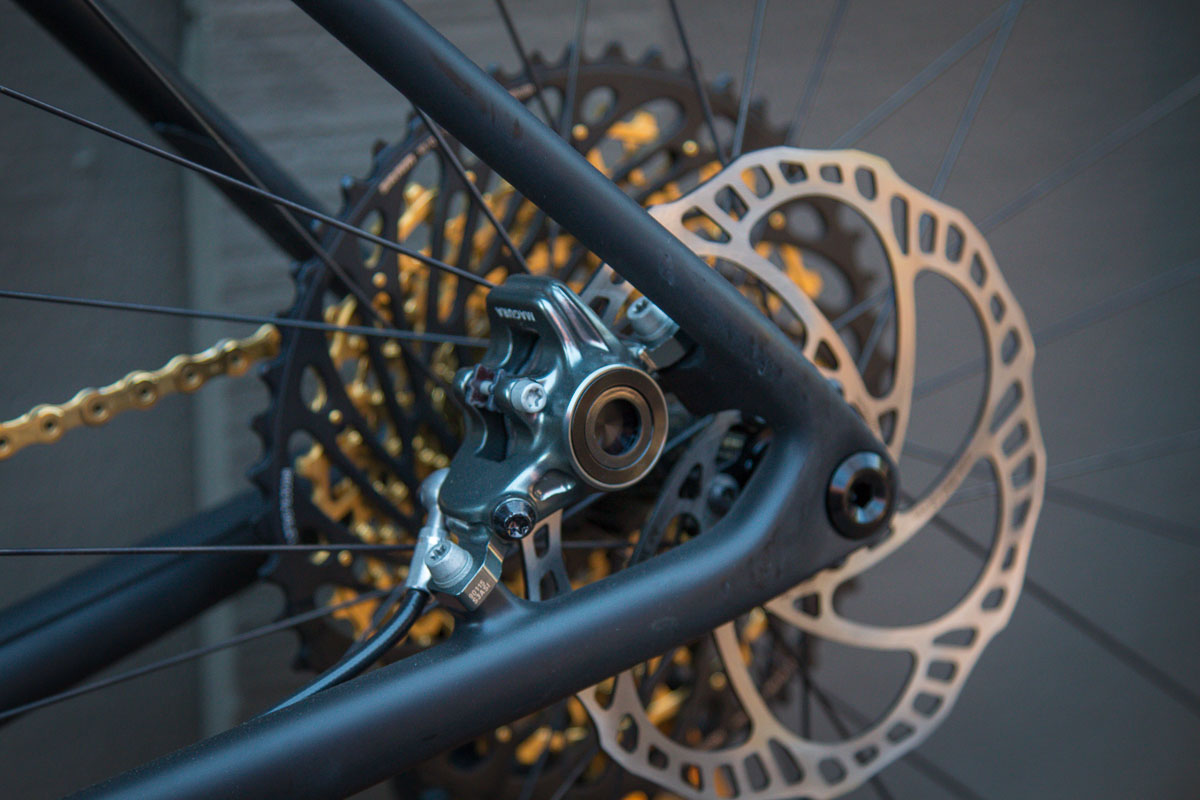 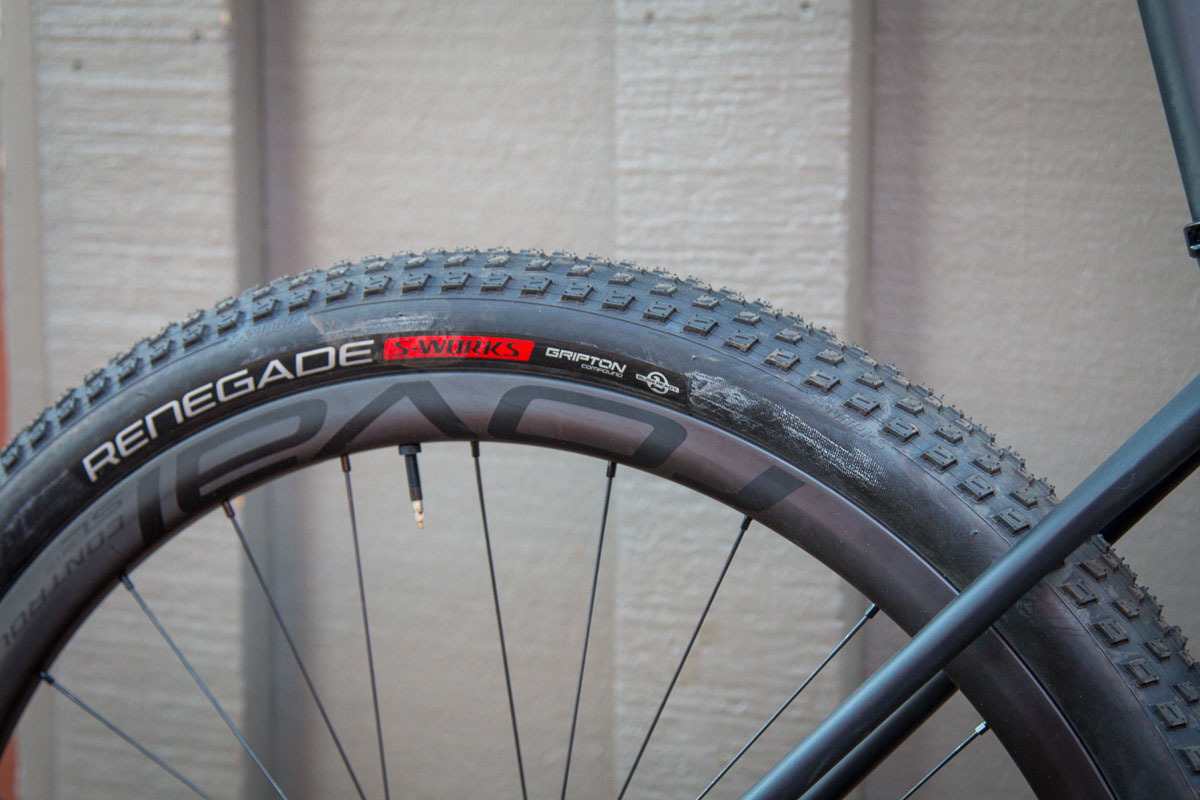 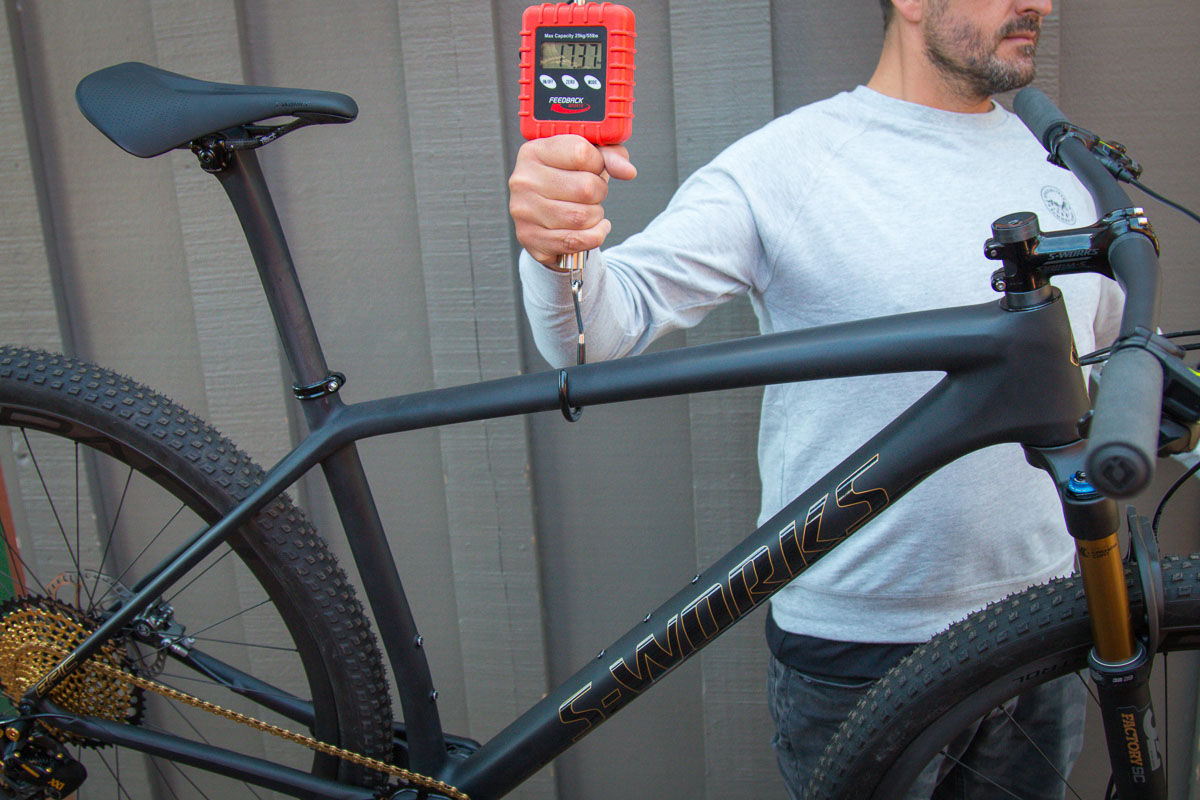 The black and gold version above is the Ultralight Edition which is an $9,020 experiment in using standard parts to get the weight down to just 17.37lbs.

Kudos to Spec for the threaded BB!!!

Do I see a threaded bottom bracket?

Mmmm, looks very tasty. Cue all the Spec haters with a laundry list of criticism. Though I wonder about the price of the S-works frames – $2K? A bit lower than I expected.

This peter denk was at scott, then cannondale. long ago…

Anyways, so much cargon engeniering, to then still use full cable housing to the rear der, and the cables jumping inside with a cheap foam tube. Do like gary klein in 1995 already, make it internal only for the cable, using support for cable housing stops on the entrance and exits of the frame. Or make it cable+liner inside, not full housing. And a link kind of housing would be a nice upgrade too, now that we are at it. Sram should use link cable housing, get it from jagwire. Easy.

There is no perfect solution. So many bikes have cable stops and no housing internally, and it comes with it’s own problems. Link cable housing is a fiddly, noisy PITA. Full housing might weigh a touch more, drag a teeny bit and possibly make some noise (although not really if thoughtfully installed), but it is so much easier to replace and work on in the field that it is still a great choice.

There actually is a perfect solution which is lighter, better performing and super easy to work on – traditional external runs. Internal cabling is a terrible idea for every reason except aesthetics.

Another upvote for full-length external housing. Snug it down with zip-ties and there will be no rubbing.

link housing is uncompressible, extremely lightweight, cost is pretty much zero as you just gotta replace the liner. no need to cut ever, just extend with more links or remove links. I use them for 7 years now in all my bikes. Never ever need to buy cable housing, ever. They do not rattle, you can lube them on the outside with wet lube every 5 years, if you want. Takes one minute.

Again, internal routing well done, well thought, works better. That is why a gary klein bike costs nowadays 3500€. No bike from the nineties costs that now. Why? cause they were thought of. A klein headset or bb is still running on original bearings 30 years after. These internal cable housing from specialized, santa cruz, yeti, they are all a joke, because these frames are actually extremely cheap. anything that really costs work to do, the chinese will not do it, they do not have the expertise, and much much less specialized, who doesnt fabricate a bike since 1998, it’s all made by merida taiwanese people. I bought a santa hardtail carbon recently, 2000€ frame, it’s a joke. Very cool color, very nice stickers, very nice geo. Now, the carbon quality, it’s the exact same as any decent 400€ aliexpress frame, they both come from the same factory.

Pretty cool and the frame price is low, but it def ain’t the lightest frame or bike 😉

Whats the full fork travel, and more details on the differences between models please.
This checks lots of boxes for me.

100mm fork travel. As for the models, the S-works models use the 790g 12M carbon frame, and everything else uses the 915g 11M carbon frame. Other than that, the differences are just in the components and the full line up can be seen here.

the swork ht frame is cheaper than lower quality carbon fs frames from competitors with less r&d and testing costs. so there’s that lol

Hey Specialized, I like your bikes and own a couple S works, but geez, stop squeezing us. For that kind of money, include a doper post at the very least and please, finally lose the brain. Now that Fox Live is out, you need to call an internal meeting and discuss keeping the ill functioning, delayed response, clunking brain or switch to outsourcing the well vetted Fox Live that actually works the way you always envisioned it. View the brain as a sunk cost and move on. It will happen, it is just how many years will you delude yourself and hamper your ROI to stay emotionally attached to an inferior technology. Please contact me for my address to send my consulting check and you are welcome.

Amen!! A friend of mine had a 1999 RS SID, yes those crappy ones. It lasted him almost 10 years, cause the guy rides very very light stuff, gravel pretty much. He got a fox float 32, a way more reliable fork than the old sid, with brain. Fork broken 2 times in 2 years, had to replace bushings avery season….

Is model by photo is Large ? Or médium

Fantastic looking bike. Pretty nice geometry too. Wonder if they will ever incorporate the swat box into the down tube like some of their other models.

This new e-bike is so light. Where did they hide the battery and motor? Also I didn’t see the specs on how many watts it adds. Any info?

Wouldn’t a longer trail (a result of the shorter fork offset and smaller head tube angle) make handling a bit more sluggish. Maybe I have it wrong, but my understanding is that the shorter the trail the more snappy the handling (or a bit too squirmy if you go too low) and that a longer trail improves stability, but becomes harder to steer.

Where is the black and gold ultra-light version sold? Is there anywhere you can pick up last year’s models which might be a bit cheaper than the newest crop, but still amazing bikes and likely better than a lot of the new models from other manufacturers?

Any way to win a bike?
I really need one