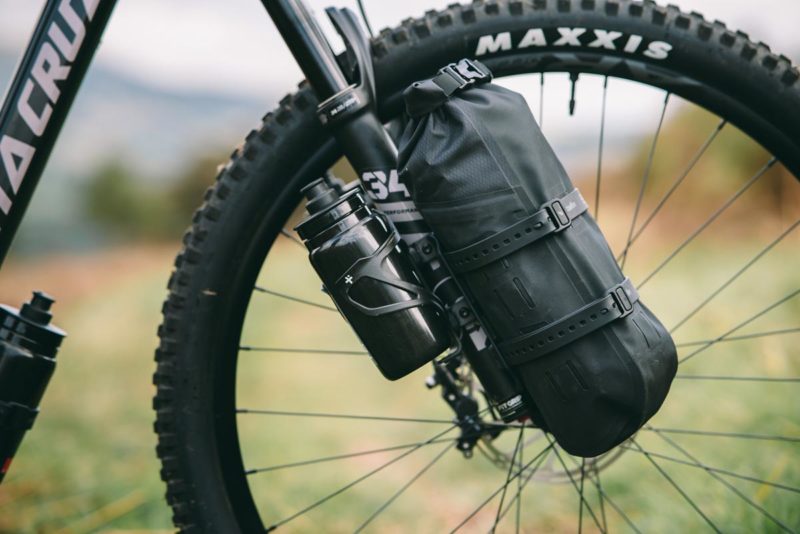 Tailfin likes to say that ‘the best bike for bikepacking is the one your already own.’ That’s been one of the driving forces in developing their Aeropack and universal rack system—even if your bike doesn’t have any braze-ons, there’s a good chance Tailfin has an option that will fit. But when it comes to the front end of the bike, suspension forks complicate things a bit. That’s where the new Tailfin SFM (Suspension Fork Mount) comes into play.

In terms of the concept of using an adapter to mount things to the fork, Tailfin isn’t claiming to have invented anything new here. Rather, in typical Tailfin fashion, they figured out a way to do things more elegantly, and apparently with demonstrably better results. Rather than using velcro straps, plastic mounts, or even straight-up steel hose clamps like you can find at the local home center, the new Tailfin SFM is a beautifully-designed clamp system with versions in both stainless steel or unidirectional carbon fiber. 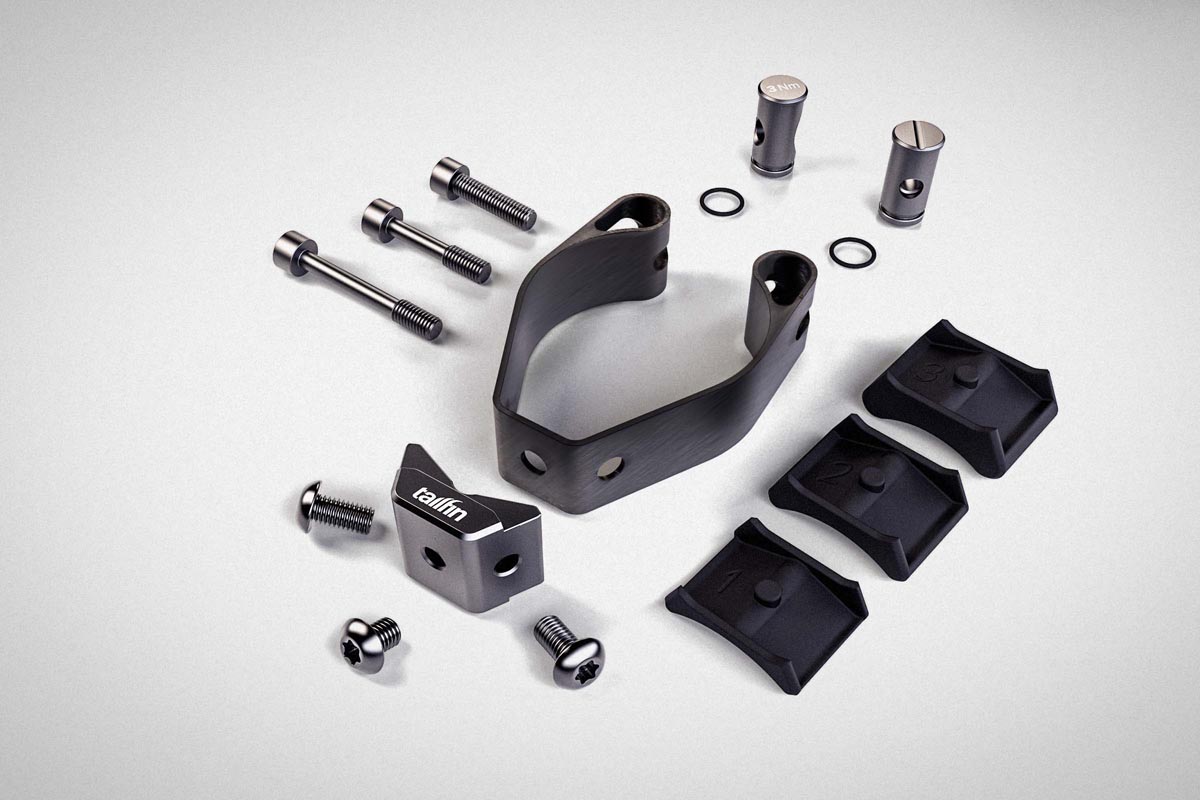 Importantly, Tailfin wanted to create a near-universal clamp design that allowed for up to two cages mounted per fork leg—without slipping. That’s more tricky when you consider that you want to do it in a way that won’t damage the legs of pricey suspension forks or require so much compression that it affects the fork’s performance. The design also needed to be low profile, light weight, and compatible with any brand of cargo or bottle cage. 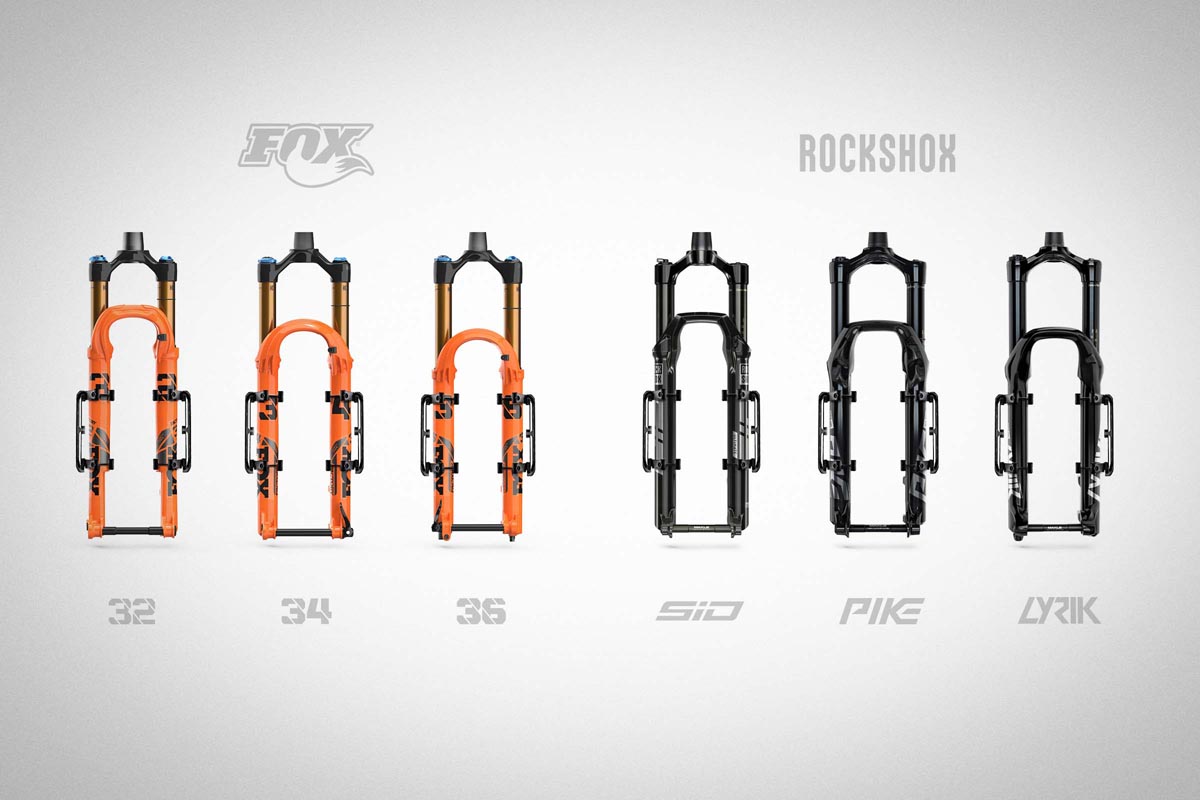 The result is a multi-part clamp system with one outer ‘band’ and three different bolts and spacer combinations. According to Tailfin, that makes the SFM compatible with 99% of all suspension forks that might be used for bikepacking with a 38-45mm lower leg diameter, which translates to 30-36mm stanchions. As shown above, that means the Fox 32, 34, and 36, and the RockShox SID through Lyrik. 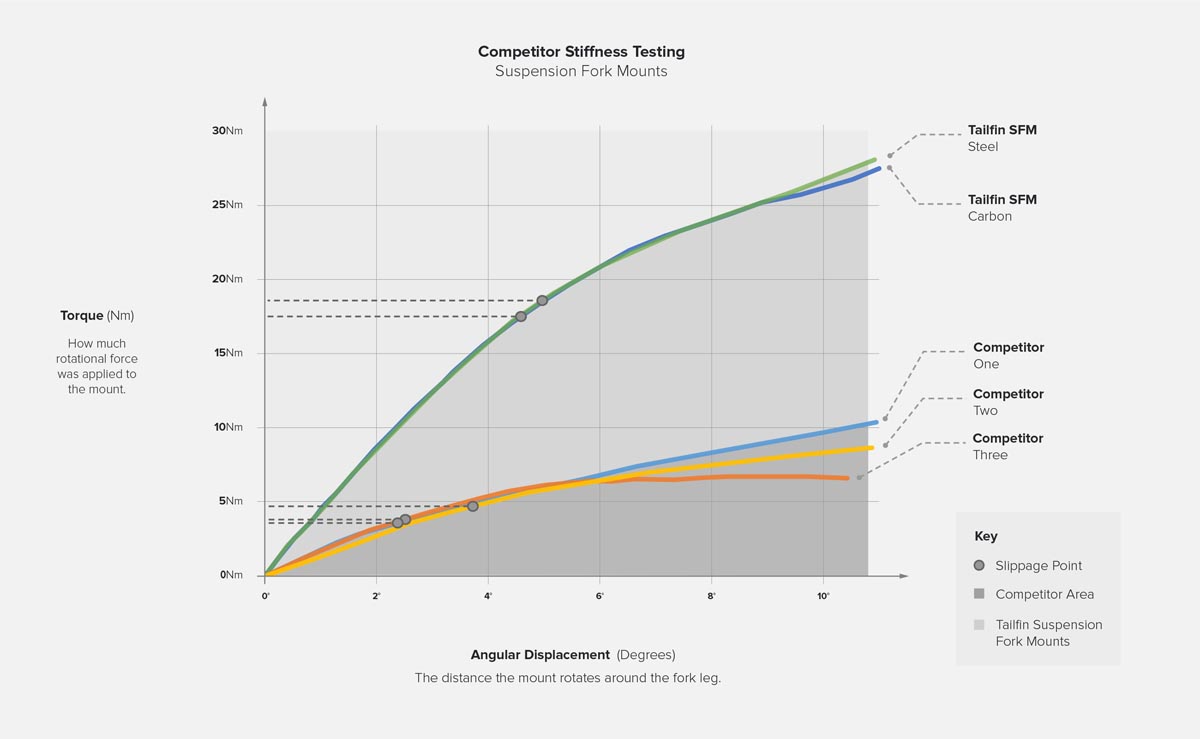 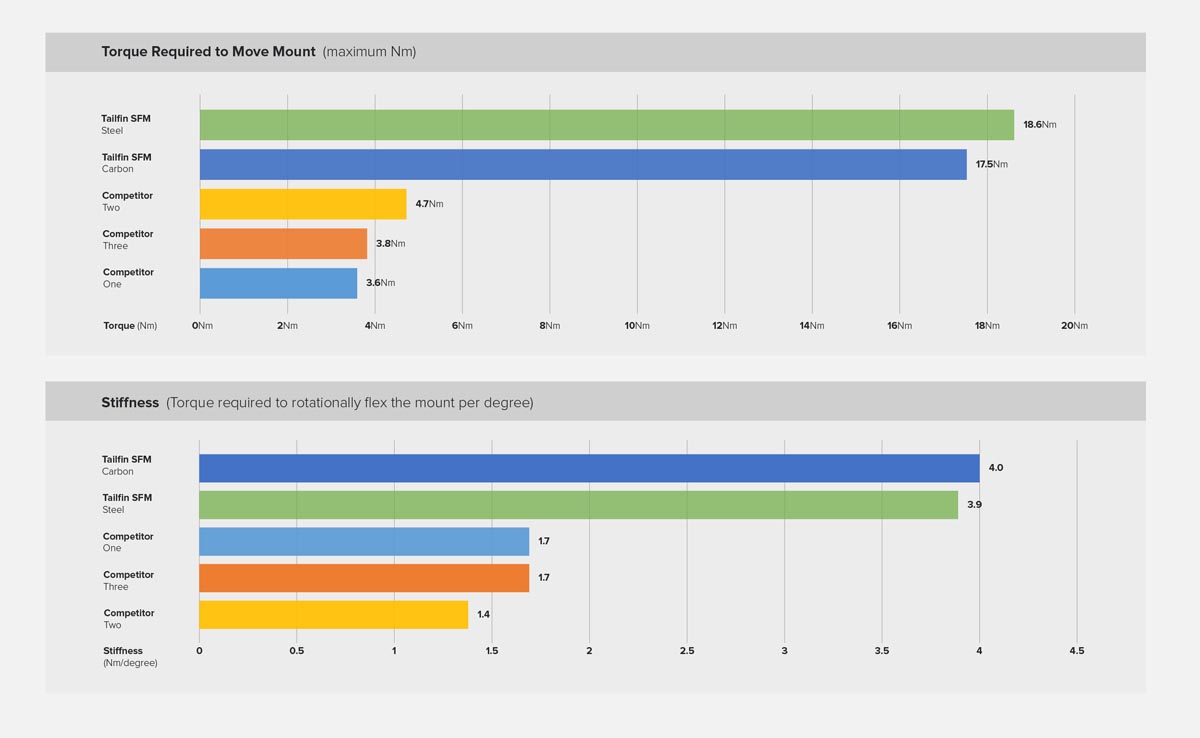 To prove that the SFM is both less prone to slippage and stiffer than the competition, Tailfin devised their own test rig which includes a vertical shaft that the mounts were installed on. The shaft was then subjected to a twisting torque around the axis of the shaft, and the displacement of each product during the test was measured. Tailfin didn’t want to ruffle any feathers by naming the competition, but they did say that Competitor #1 was a Stainless Steel band, hose clamp mount, #2 was a plastic worm and wheel mount, and #3 was a Plastic and Velcro mount. From those descriptions, you could probably guess the products.

Obviously, this is using Tailfin’s own testing protocol, not an impartial third party, but their testing yielded impressive results. Both the carbon and the stainless steel SFM took more than twice the amount of force to slip as the nearest competitor, and the mounts were more than twice as stiff.

Why does that matter? The slippage thing is obvious—you don’t want your cargo to slip on your fork and potentially get stuck in the spokes, causing a crash. But the stiffness helps in terms of handling. Any flex in the system will contribute to the feeling of ‘sway’ as the cargo moves around, which is made worse by having the weight up front, impacting the handling. 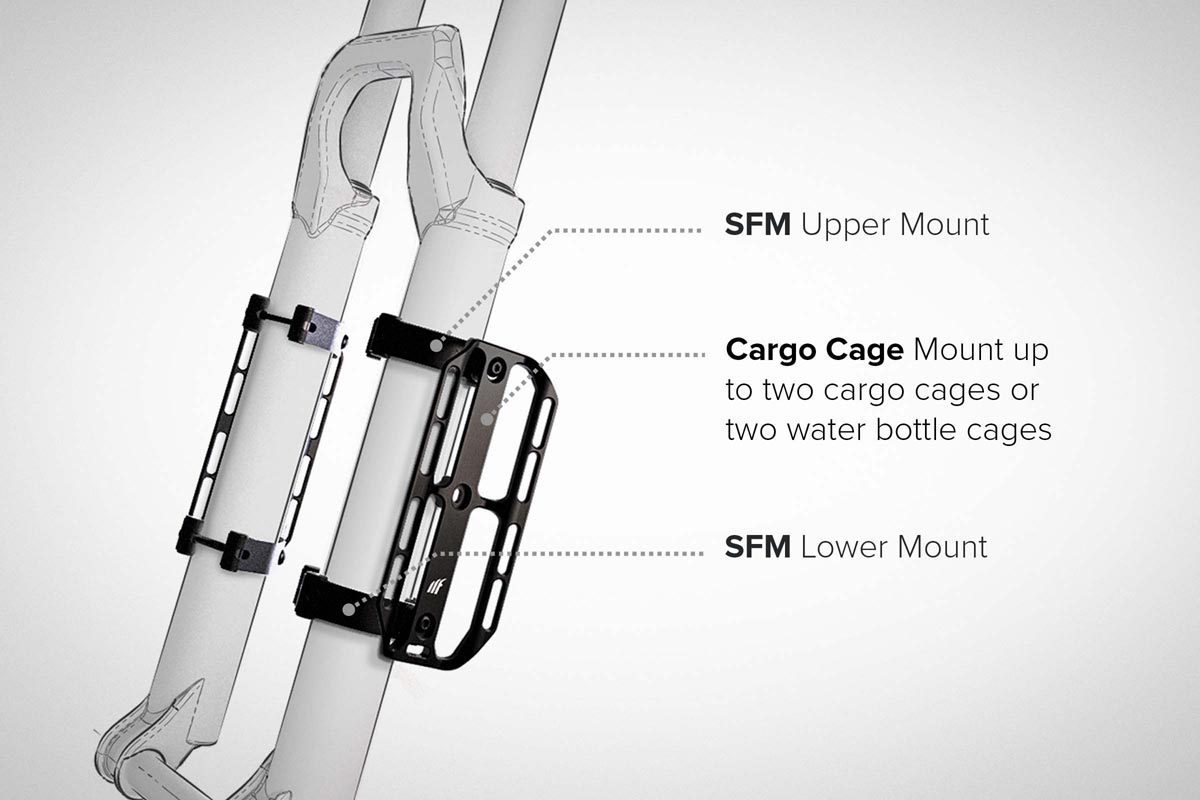 To make installation as easy as possible, Tailfin includes a measuring device that is color-coded to help select the proper bolt and rubber spacer. From there, you just install the clamps loosely on the fork, add the cargo or bottle cages you plan to use, and then tighten down to the recommended torque of 3Nm.

How much can I carry? 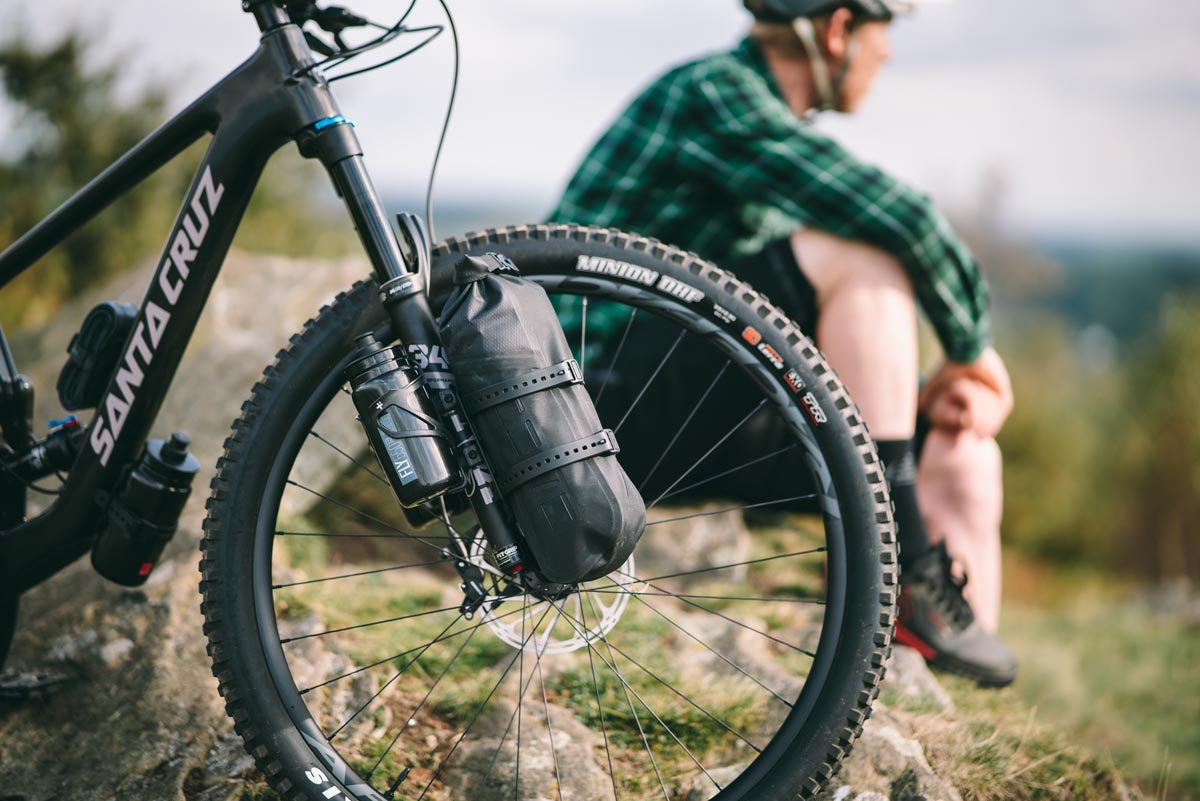 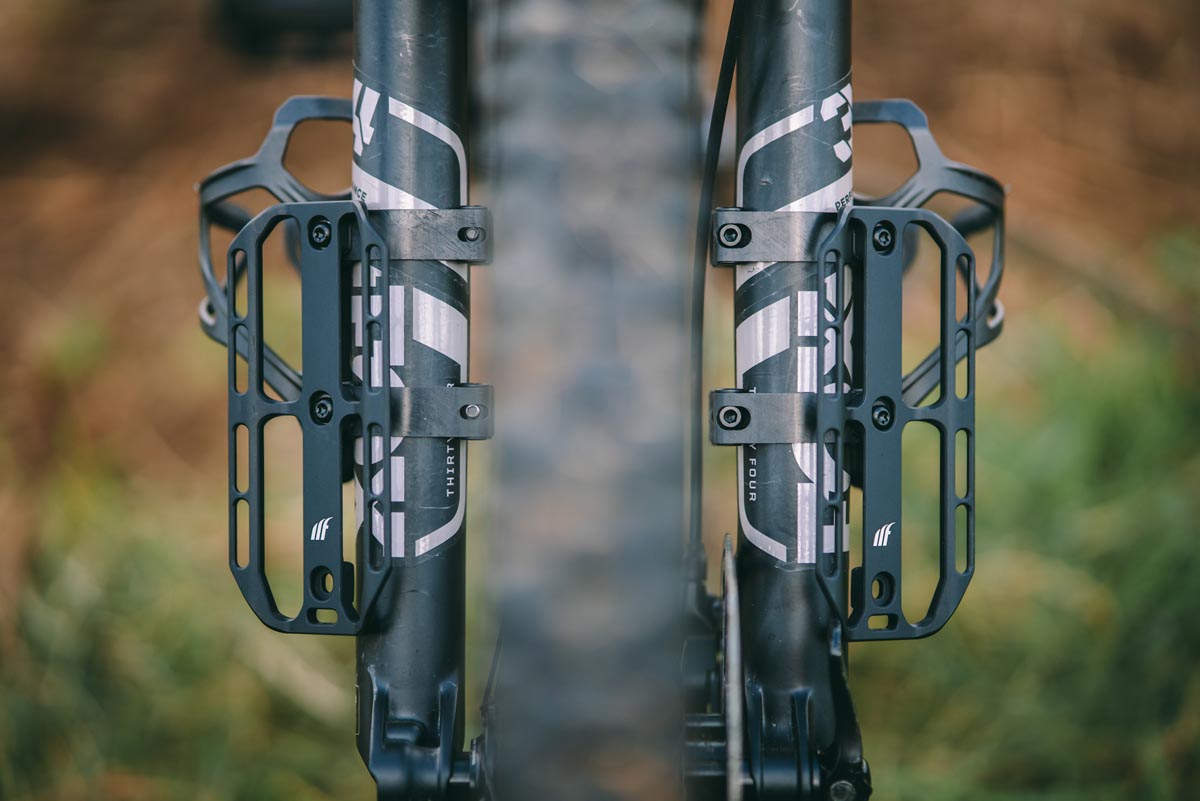 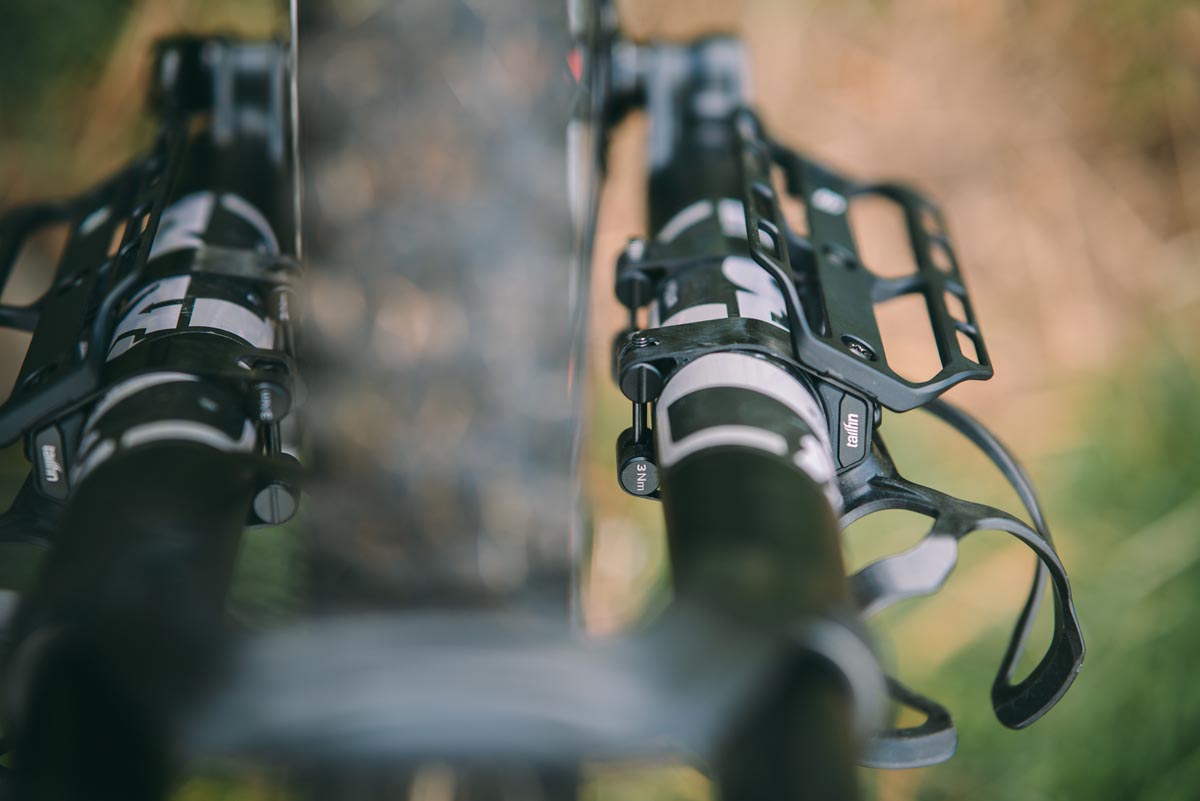 When properly installed, Tailfin specifies a weight limit of 3kg for singletrack use or 5k for gravel. That applies to both single or double cage configurations. Based on what you’re carrying and how you’d like it to ride, there are three different mount positions for single cages, and one for the dual cage configuration. When used in the front/rear configuration, the SFM looks like the mounting points are very low profile—which is great news for avoiding obstacles on the trail with gear jutting out from each fork leg. 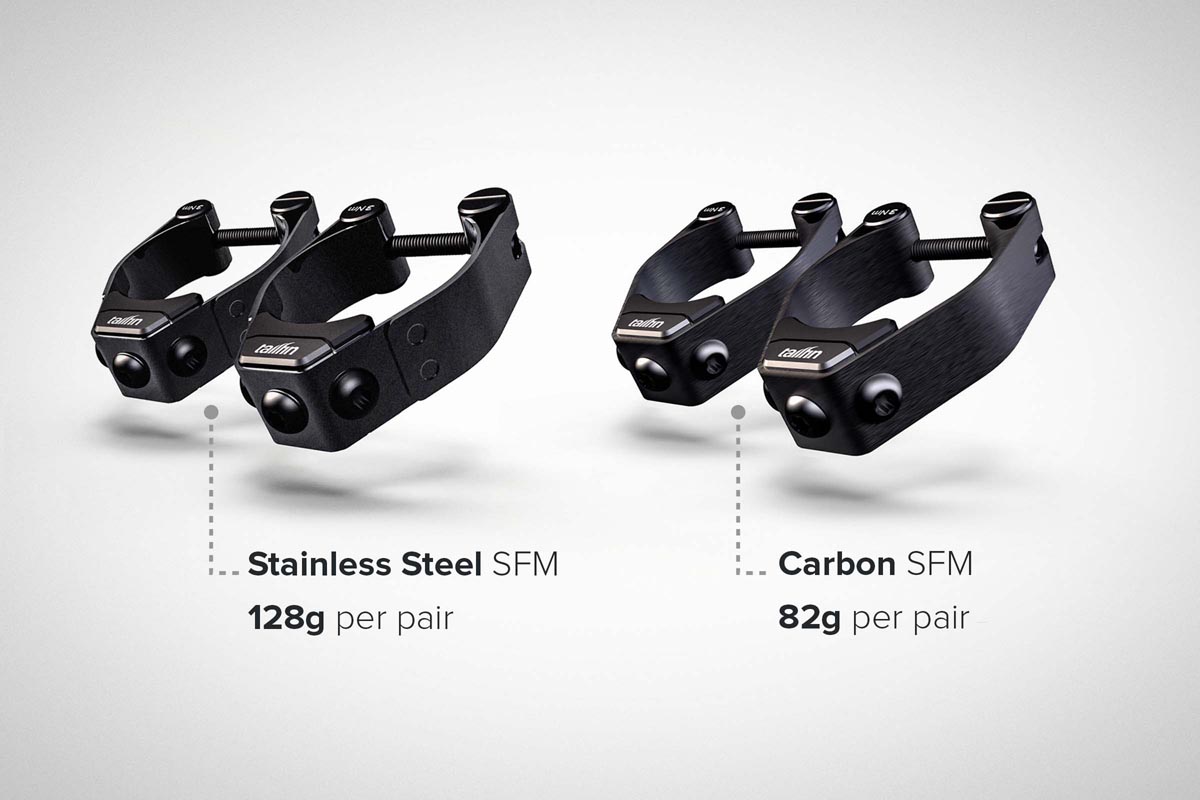 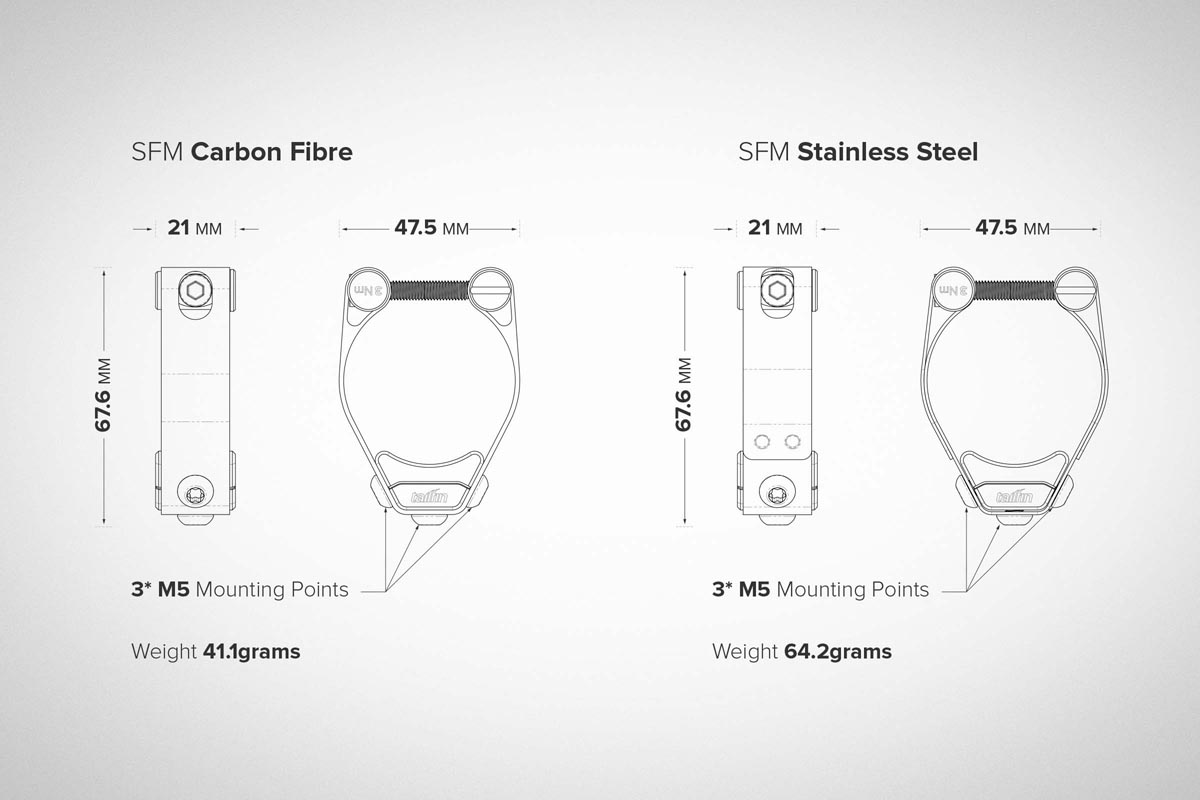 While the performance is nearly the same, the biggest difference between carbon and stainless steel SFMs is the weight. The carbon model checks in at 82g per set (with hardware) and the stainless is 128g per set with hardware. For two sets (one for each fork leg), that’s just under 100g of weight savings. You’ll have to decide if that’s worth the extra $30 per set, but for the gram counters, it’s the clear choice.

The modular system is designed so that you can replace any part and it includes the impressive Tailfin product support. That includes a 5 year, no-questions-asked warranty, a crash replacement warranty, and Tailfin will ship replacement parts anywhere in the world—important if you’re on a bikepacking adventure in Nepal, and a mechanical leaves you stranded. 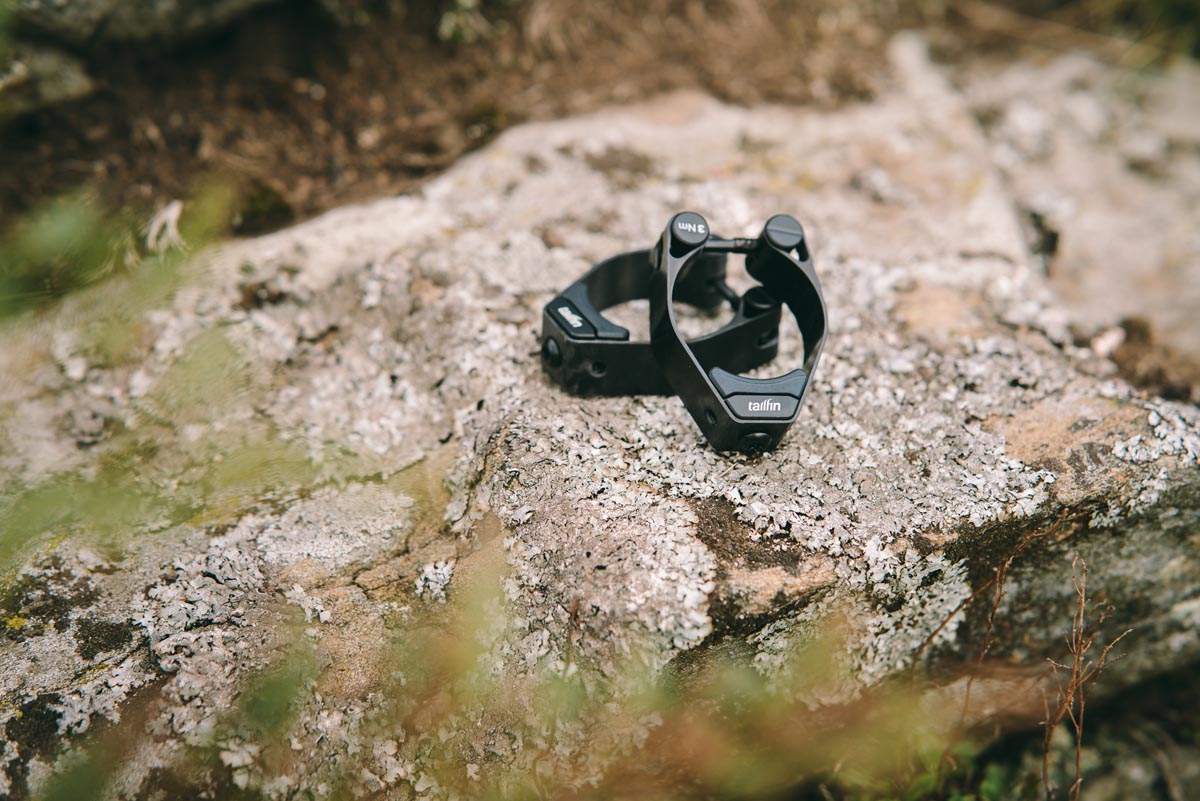 Priced at $70 for the carbon SFM (set of two clamps, for one fork leg), or $40 for the Stainless Steel SFM set, carbon models will be available starting on November 2nd, while stainless steel will be shipping in December. When ordering, you can also add Tailfin’s excellent Cargo Cages which are worth a look.

I’d be very interested to hear how these compare to King Cage’s USBs. What are “Competors” 1,2,3 anyhow? Honestly, they’d have a stronger case if they named who they were comparing themselves to.

Based on their descriptions, it seems like they’re comparing it to the King Cage Universal Support Bolt (#1), Topeak Versa Mount (#2), and likely a TwoFish Quick Cage adapter or similar (#3).