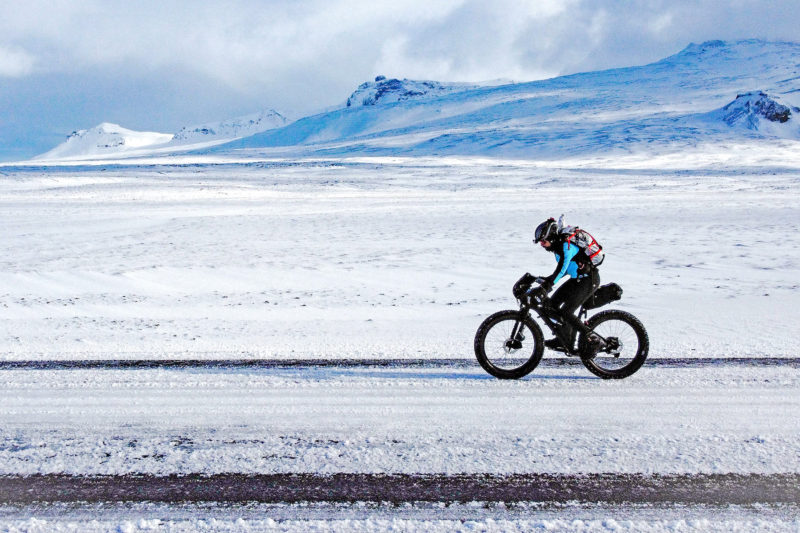 We most often think of Wilier for lightweight carbon road & mountain race bikes, but ultra-cyclist and environmental activist Omar di Felice is set to pedal the longest-ever bicycle crossing of Antarctica on a prototype Wilier fat bike. In the teasers of the down to -50°C, 1600km long, 10,800m of elevation expedition effort across the South Pole, Omar di Felice is seen on an unlabeled carbon fat bike, but his more recent preparatory training rides across Iceland this summer have been on an alloy prototype, custom made for him by Wilier Triestina…

It’s been a lifelong dream for Omar di Felice to pedal across Antarctica, and now after years of progressively more extreme winter riding adventures, Antarctica Unlimited is coming soon. 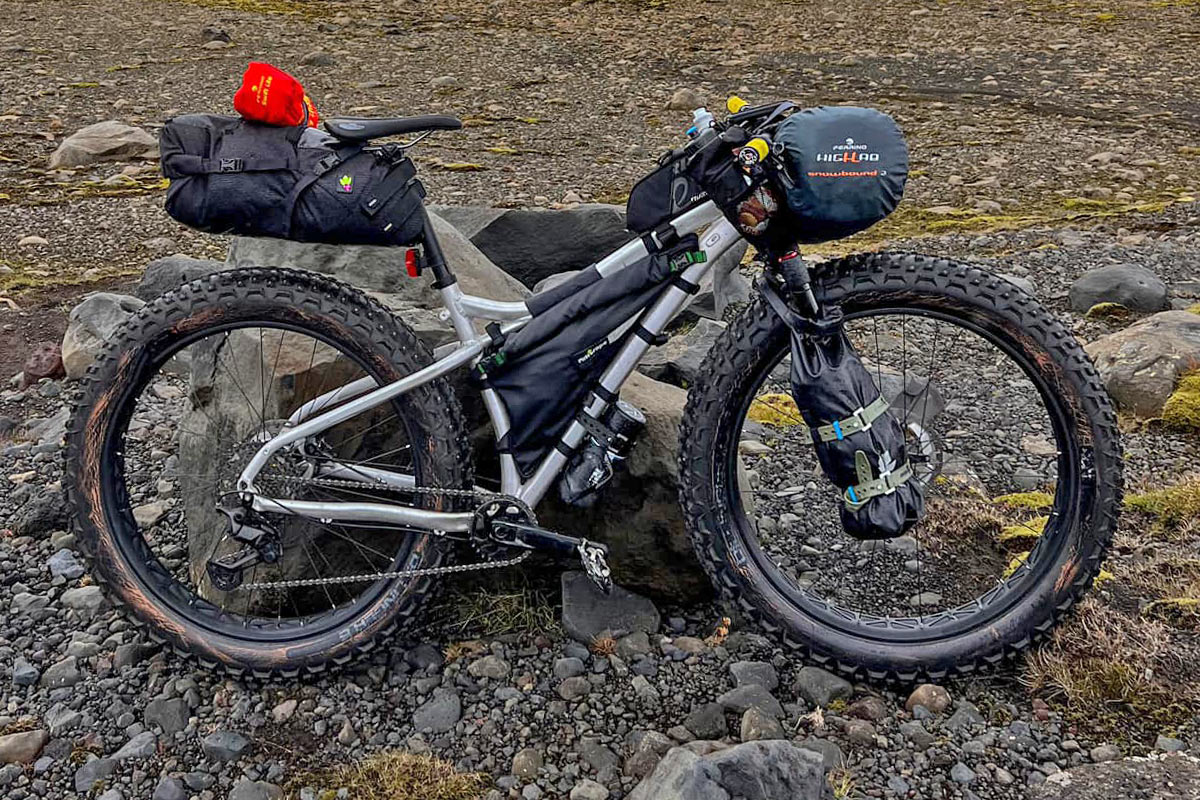 The bike that Wilier has developed for Omar di Felice to ride 1600km across Antarctica is a raw welded alloy frame. He had previously ridden what appears to have been a blacked-out Canyon Dude. But this new aluminum prototype looks to retain the 27.5″ wheels, while stepping up with wider tire clearance for the extra flotation needed to cross unpredictable Antarctic snow and ice. 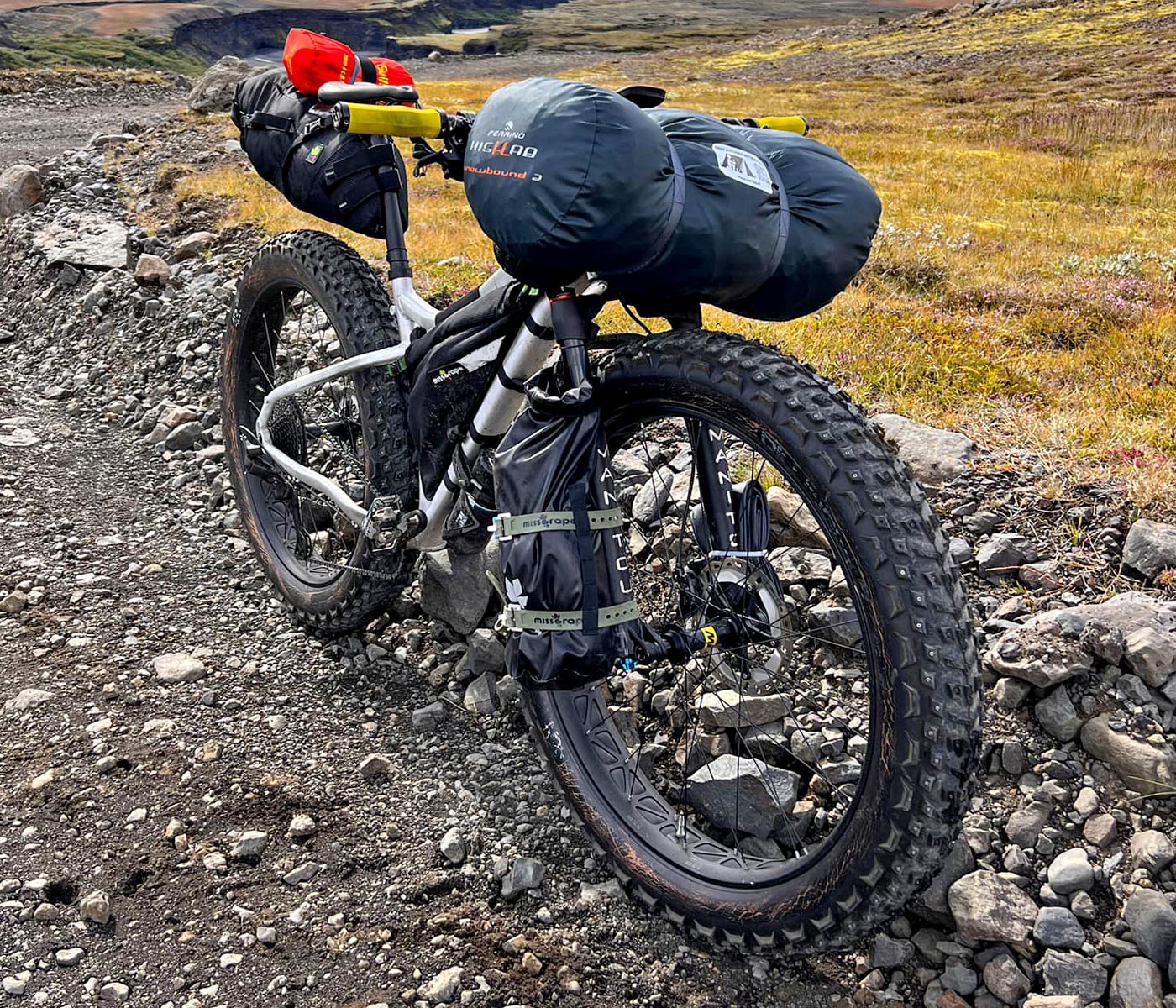 Omar has been training for the upcoming expedition exclusively on fat bikes equipped with Manitou’s Mastodon Pro suspension fork. Although it’s unclear if he will stick with it for the Antarctica trip or opt for a lighter, simpler rigid fork?

As for rolling stock, even fully blacked out to hide the tans sidewalls of the non-sponsor tires, Omar’s bike as he rode it across Iceland earlier this summer was fitted with 27.5 x 4.5″ 45NRTH Dillinger 5 studded tires, with 252 concave carbide tipped studs for grip in icy conditions. 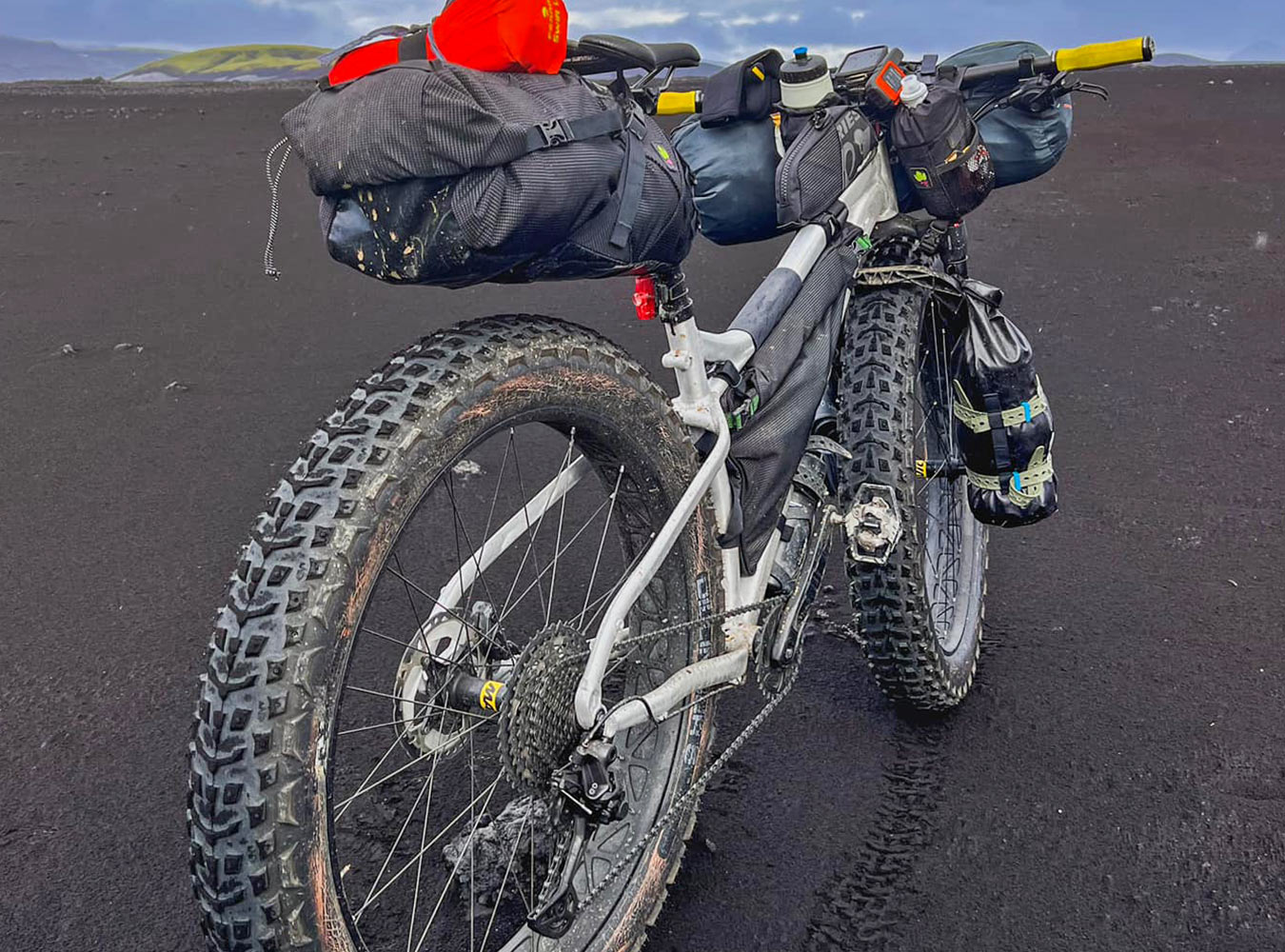 His hubs get labeled as Mavic who are his correct wheel sponsor, but we don’t really think that Mavic is working on a prototype fat bike wheelset, here.

Instead, the shape of the rim cutouts (especially around the valve) suggests these are a set of the latest 27.5″ edition of the 76mm internal DT Swiss BR 2250 wheels that were introduced as Canyon-only when their Dude carbon fat bike switched to the larger diameter wheels two winters ago. 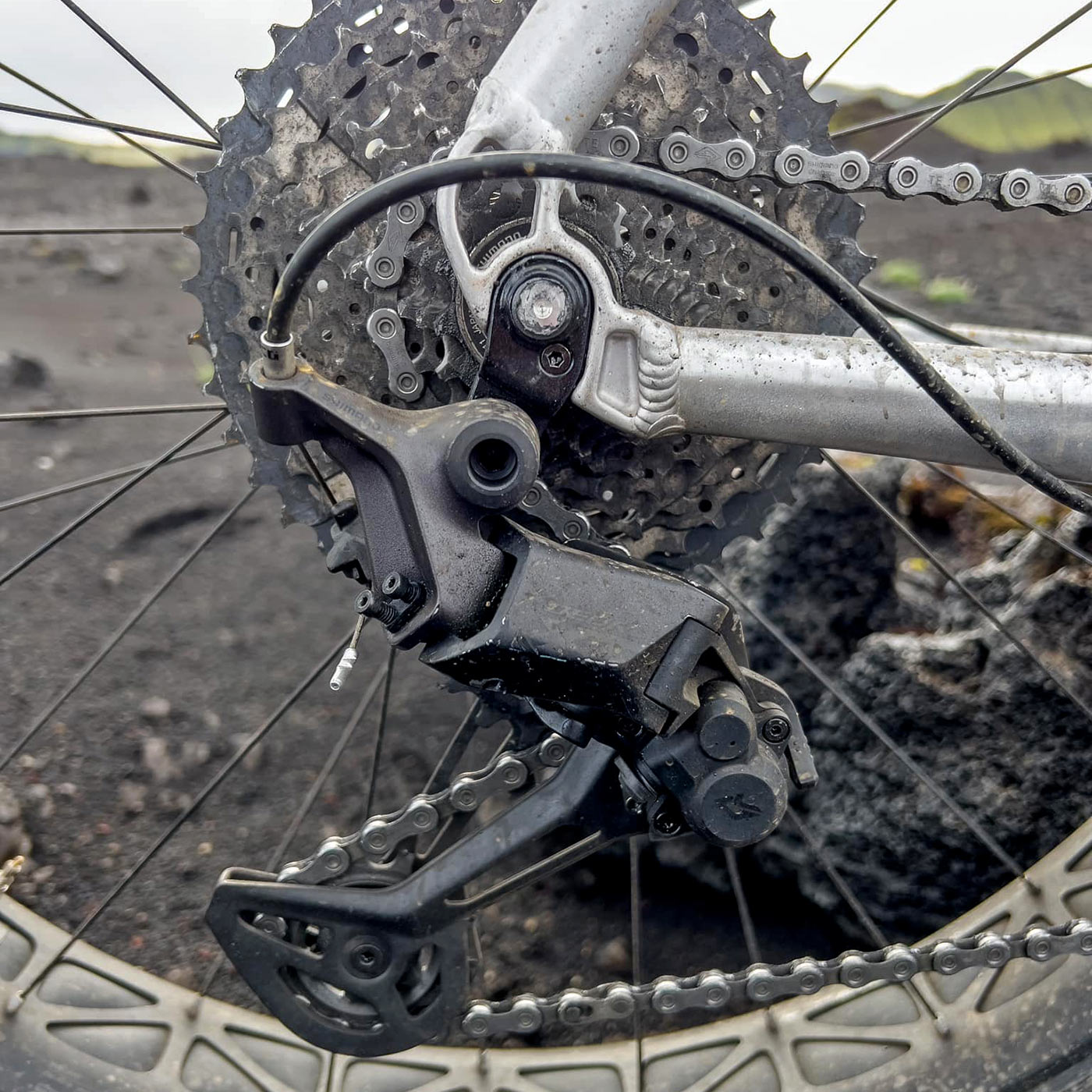 Omar’s alloy prototype frame has wide-set seat & chainstays that get really thin at the tire sidewalls to make room for big tires, while likely keeping overall bottom bracket & crank Q-factor relatively narrow. Presumably, to make up for thin tube sections, the frame features a number of reinforcements, braces, and gussets – including at the seat cluster, seatstay bridge & BB. 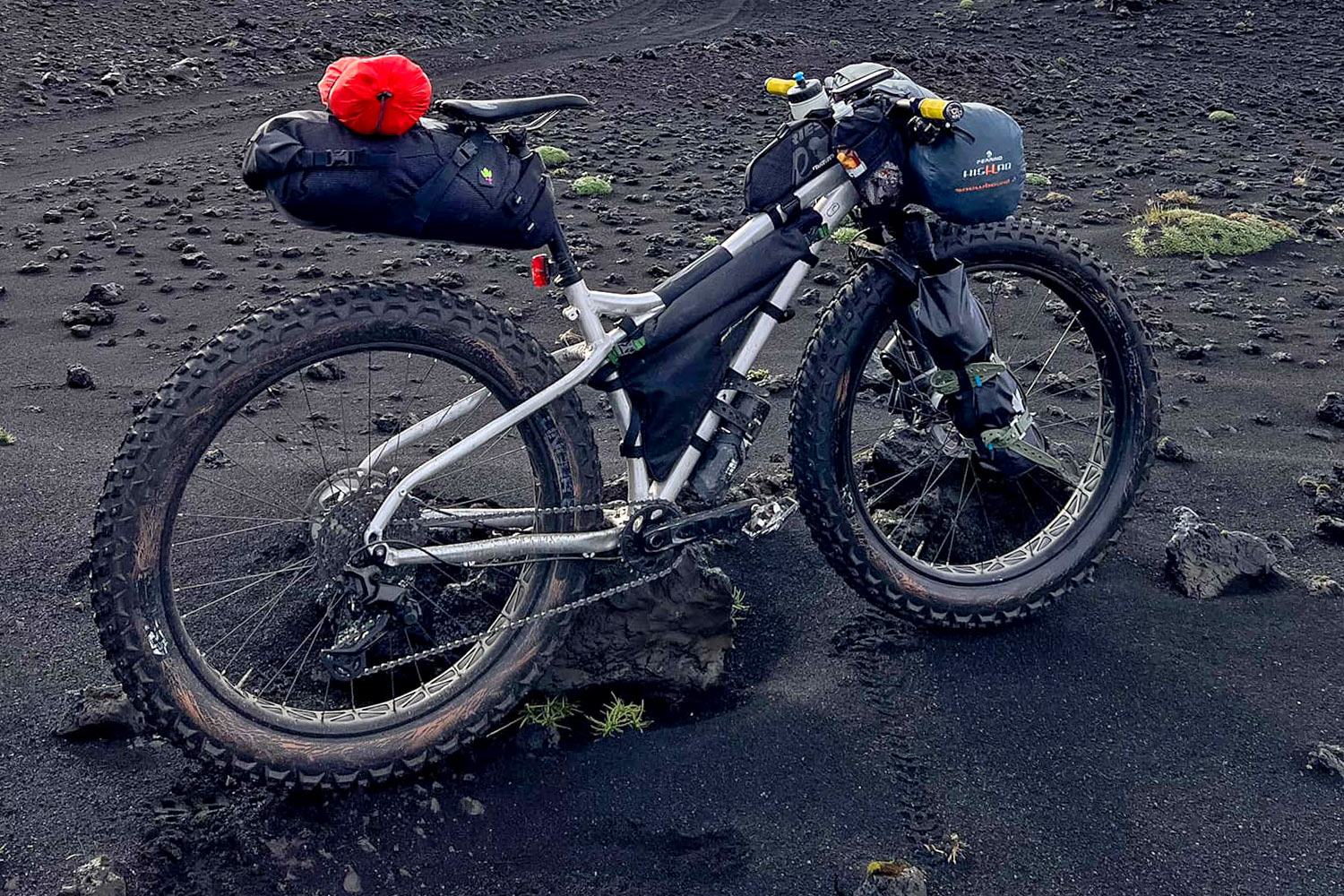 The prototype fat bike frame routes cables externally along the seatstays, but then they likely appear to shift internally into the downtube, exiting on the left side just behind the tapered headtube.

The bike also features a robust-looking stud to attach a rear rack and a set of cage mounts under the downtube for a tool bottle. Omar can usually be seen riding with a mix of a custom frame bag, stock saddle bag, and Wilier-branded strap-on toptube bag, all made in Italy by Miss Grape. 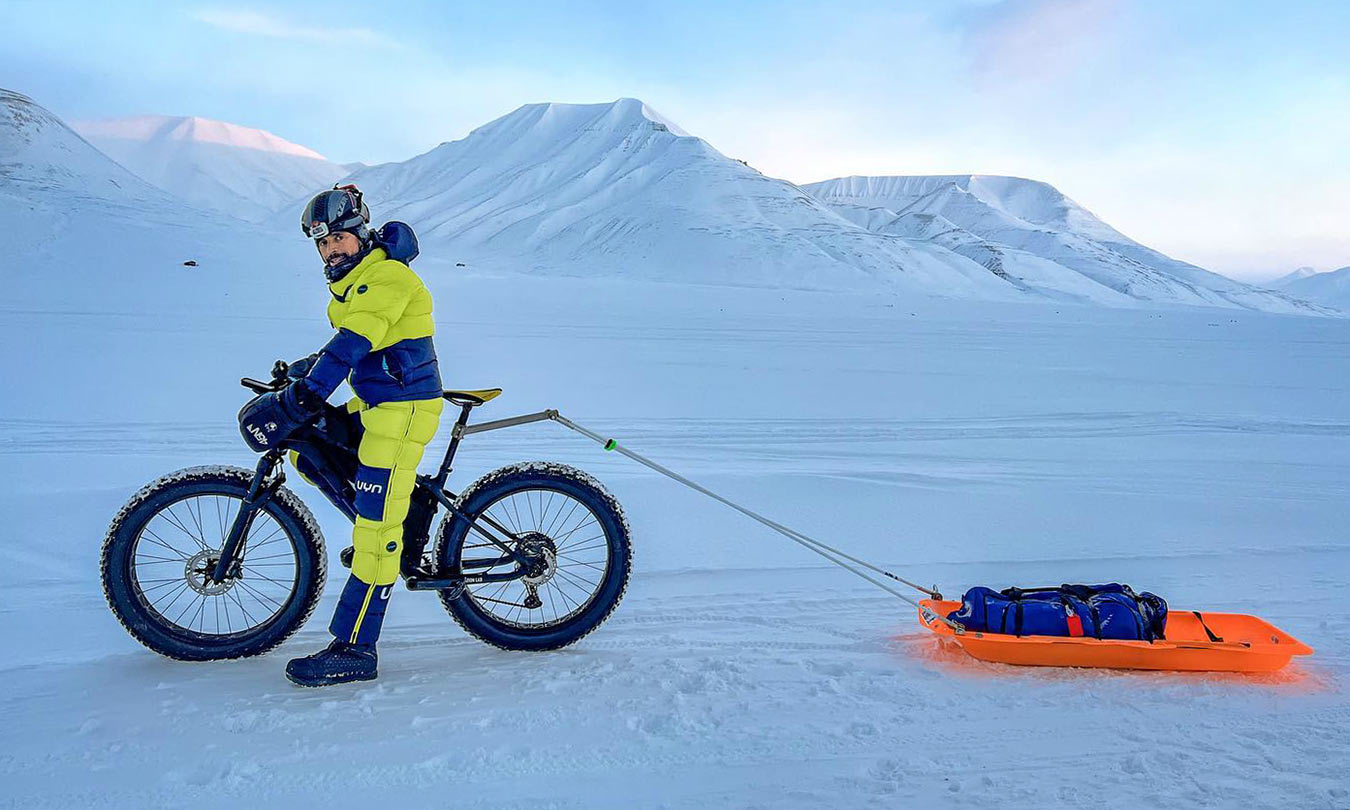 One piece of fat bike true expedition gear that has remained constant no matter which frame Di Felice is pedaling across the snow is the Ski Pulk Paris gear sled. The lightweight US-made sleds get the weight off the bike itself for better handling. And when you are setting off on a two-month, self-supported ride across the South Pole, there’s going to need to be a lot of extra food, warm clothing, and emergency gear to go along for the ride.

The standard Ski Pulk attaches a hitch to the seatpost, but it might be possible to attach more securely to a rear rack setup as well. 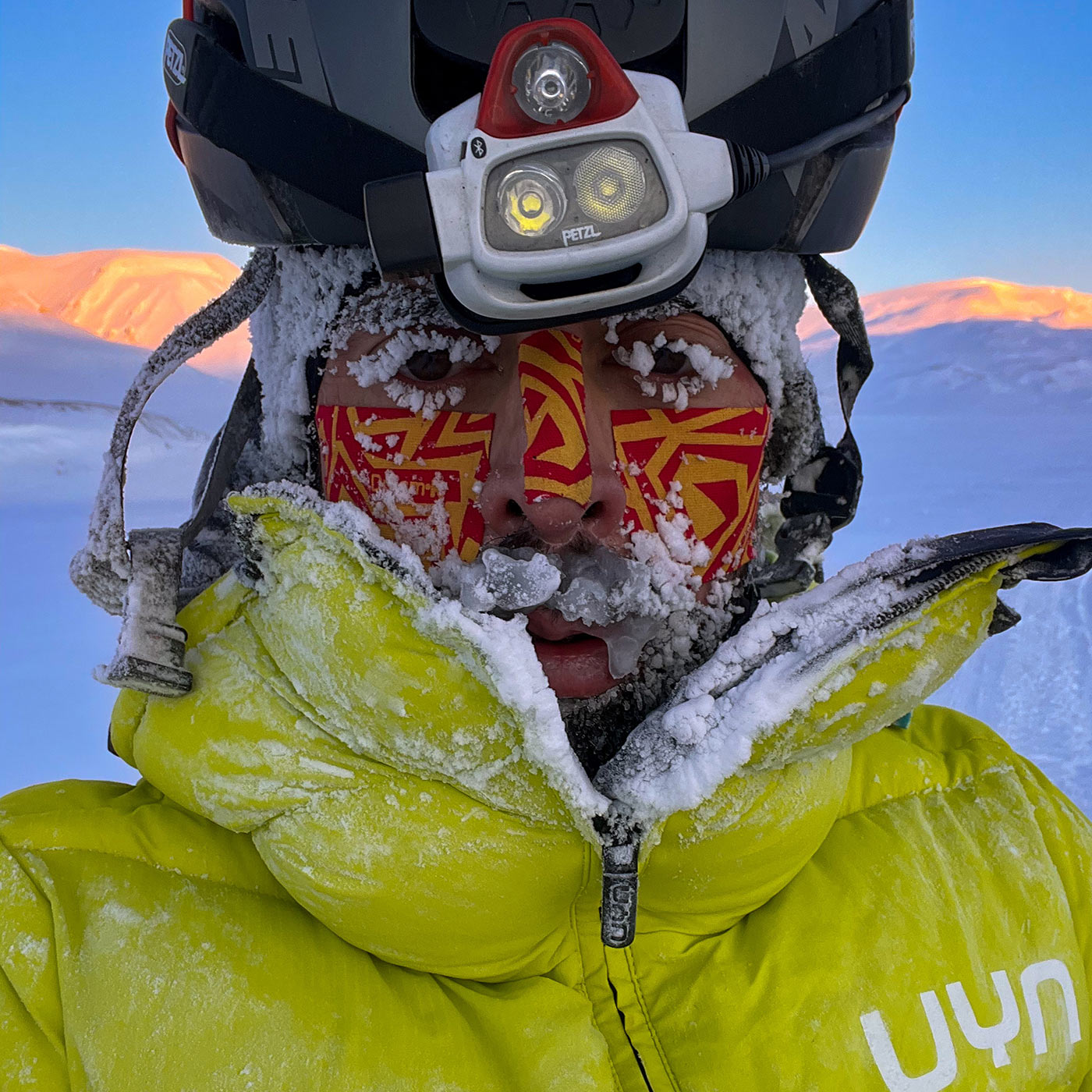 Beyond the bike, there will need to be a lot of warm clothes. Italian sports clothing outfitter UYN developed a special high-altitude, low-temperature fat bike expedition suit for Omar, based on their mountaineering suits, but tailored for pedaling. Then, throw on a warm beanie, a couple of layers of Buffs, and an aero Lazer helmet because #aeroiseverything…

But also because the adjustable ventilation of the Bullet 2.0 helmet helps regulate temperature over varied terrain. Fat biking is hard work, and sweating when it is -40°C won’t end well. 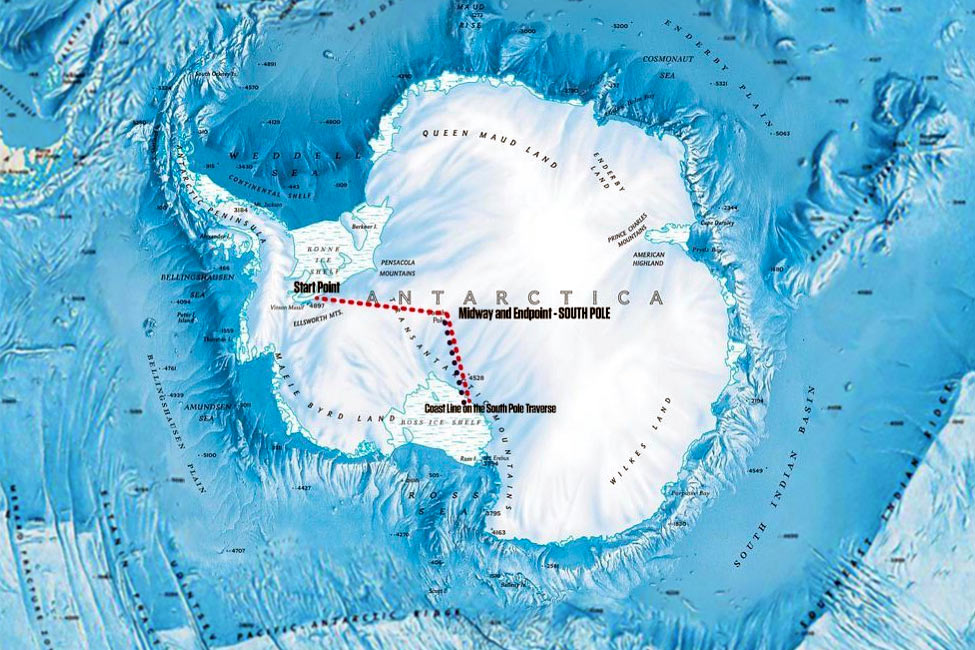 “Antarctica Unlimited is part of the “Bike to 1.5°C” initiative, through which Omar seeks to raise awareness of the serious climate crisis, this time round in Antarctica. The region is known to be a real-time map of climate change and, sadly, where the effects of global warming are most visible. In fact, it is an area where scientists from all over the world are studying climate change. We need to look no further than the ESA (the European Space Agency) currently working in Antarctica with a radar to monitor glaciers and analyse the trend in global temperatures.“ 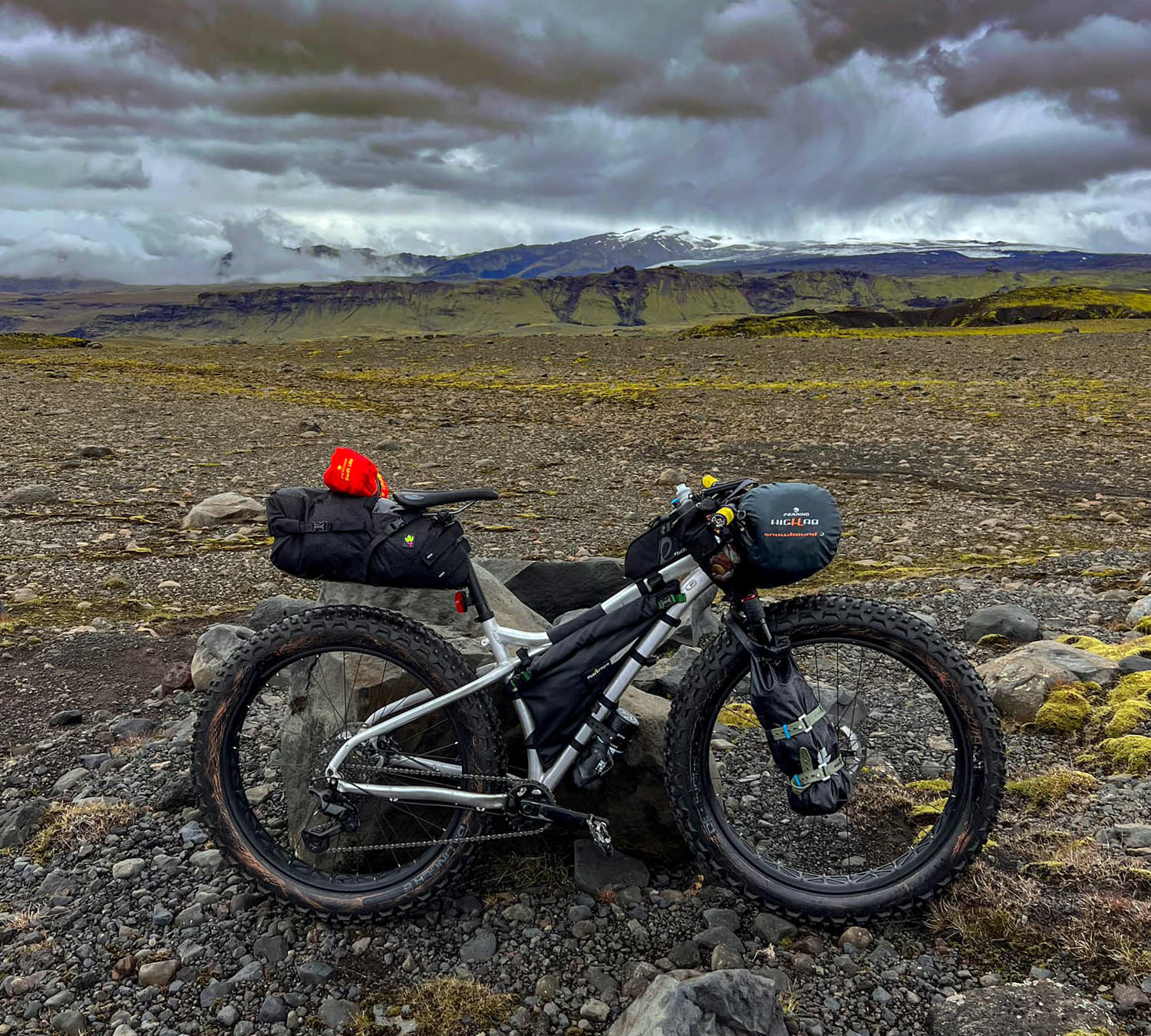 Di Felice’s Antarctica Unlimited challenge continues the Italian cyclist’s effort to boost awareness of the impacts of Climate Change and especially how the world’s glaciers are melting at an increasing rate. 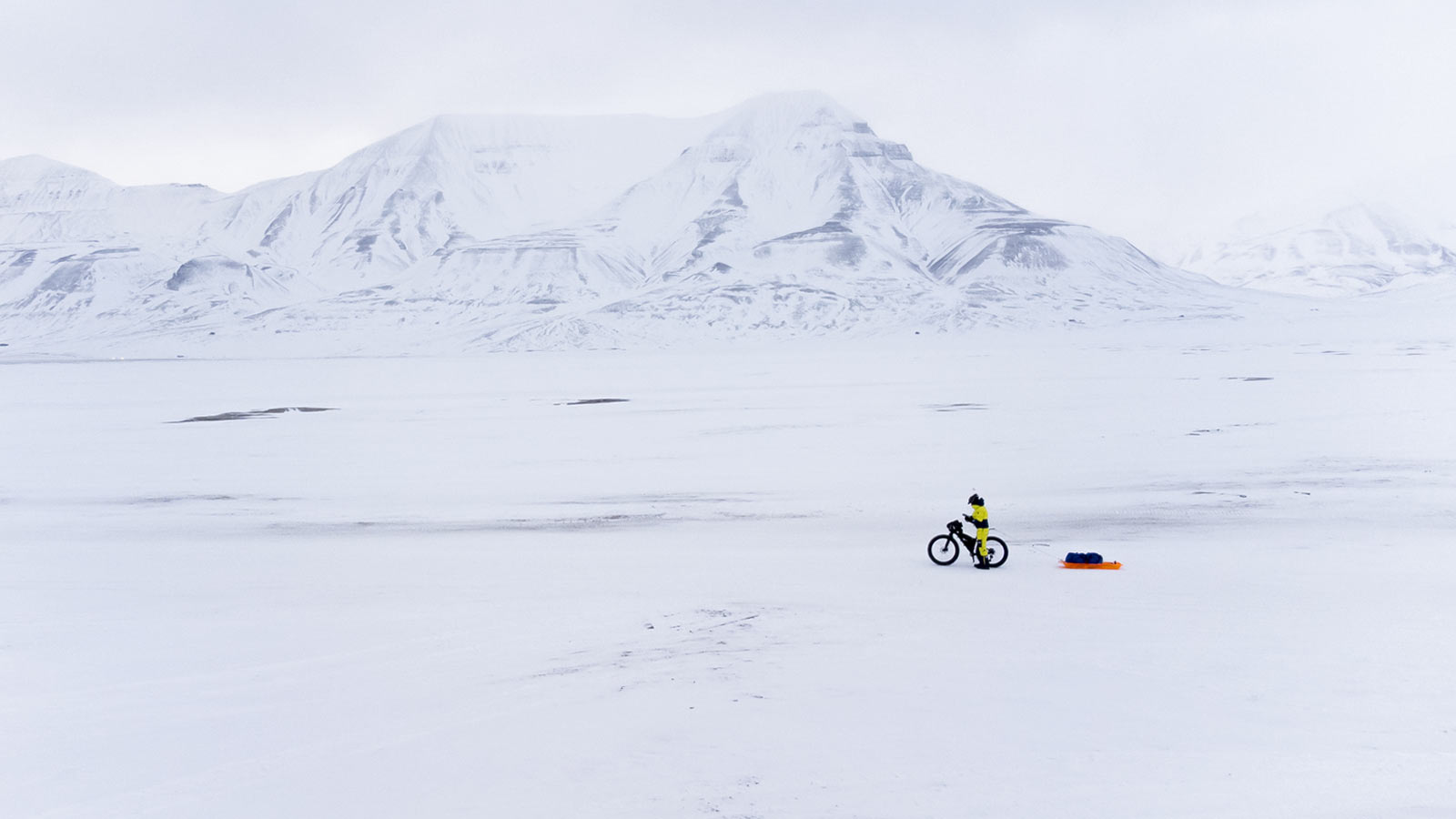 “It is the longest traverse by bicycle across Antarctica, in which Di Felice will cross the South Pole from coast to coast: a solo expedition covering 1,600 km and 10,800 m D+ in temperatures as low as –50°C.

In the coming weeks, full details will be released on the cycling expedition’s schedule, which will undoubtedly constitute the trickiest and most fascinating phase of the project, and which is closely linked to the permits needed to cross Antarctica.“

Unbelievable! This man is amazing