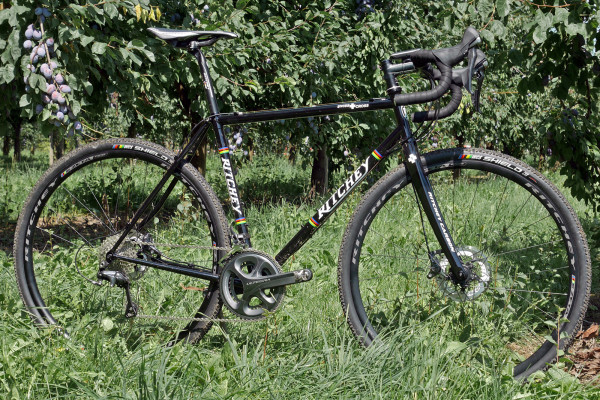 At the end of last winter we had planned to get out for a few weeks to test the newest steel cyclocross bike from Ritchey, the Swiss Cross Disc. Two of our European testers spend a lot of time on fairly comparable steel disc brake cross bikes – both built by small frame builders, one fillet brazed from Ritchey Logic tubing and the other brazed/lugged from Columbus tubing – so we wanted to compare the ride of a production bike from similar tubing. In the end that slightly longer test didn’t happen, so we were happy to get another chance at the end of this summer, even if it was only for one ride. Join us after the break to see what we thought of the bike, as well as our impressions of the new Ritchey tires and bar… 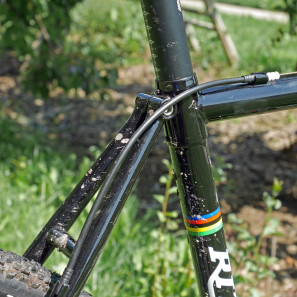 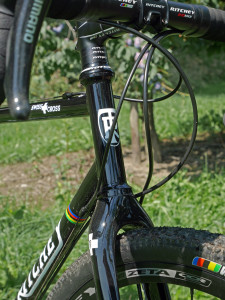 The Swiss Cross Disc, like its glossy red canti brother, is built to be a high quality steel cross racer at a more attainable price. That being said the $1300 frameset (including frame, fork, and a drop-in bearing headset) still demands a premium over many mass-produced steel bikes. The bike is traditional in someways, like its small diameter tubing look and a combination of welded and lugged construction, but with its Ritchey racing pedigree it adds a bit of modern tech, not least of which include the forged and machined headtube with an integrated headset, the full carbon fork, and disc brakes.

Unfortunately the test bike we were to be loaned back last winter, belonging to the son of a local Ritchey distributor, got crashed pretty hard about a week before we were supposed to pick it up, so was out of commission for the time we planned to ride it. It being steel, the bike ended up getting repaired and is reportedly back being ridden again, but our window had passed, so we didn’t get around to riding it then. So when I got a chance to take one out again, I jumped on it. 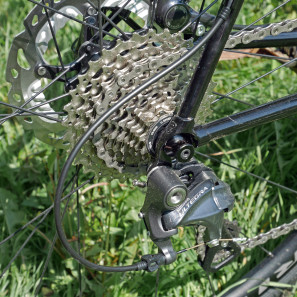 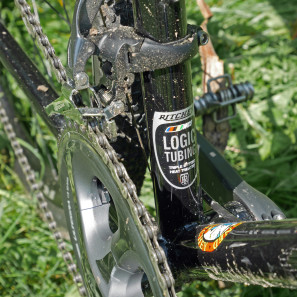 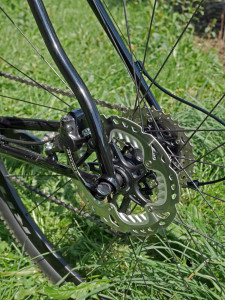 The Swiss Cross Disc gets a sloping toptube for what Ritchey calls modern cyclocross geometry. What that means is a 72° headtube/73.5° seattube, with a typical 383mm reach and generally upright 579mm stack for this middle-of-the-road size. It also gets 63mm of BB drop (and a standard 68mm threaded BB), which leans towards the high side for a bit more clearance for mixed trail riding. All of that added up to geometry a bit more upright and slightly more relaxed than most, more race-oriented cyclocross bikes that we test. We were fine with that as the brief test was going to be more trail riding and dirt road exploring, and less of an hour at max heart rate.

That’s mostly where our impression lie with the bike. The Swiss Cross Disc is certainly a capable bike for trail riding and fast gravel road exploring. Its smaller diameter tubes lean towards one of the more flexible and forgiving cross bikes we ridden in recent memory. While a couple hours spent off-road on most modern cross bikes leaves us feeling it a bit in the lower back, this one had no such effect. With thin stays and a quick release rear wheel, short out of the saddle efforts resulted in a little bit of rotor drag in the rear. That’s something we see in almost all steel bikes, and while it can be annoying or at least disconcerting, it never has seemed to be a real performance detriment.

Although it did show that forgiving nature that most steel bikes aim towards, the bike never felt slow. Even after having recently come off of a top notch carbon race bike, the Ritchey still felt decently quick to get up to speed, and never felt sluggish to start. Where it does feel a bit slower is where you are already at speed and try to sprint. It felt like when it was already moving along at a decent clip, it just didn’t want to go much faster very quickly. 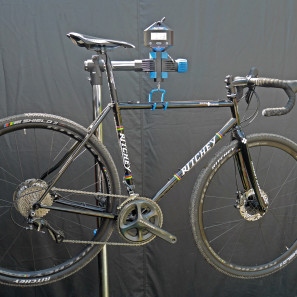 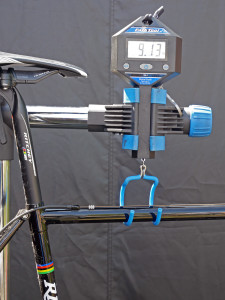 The Swiss Cross  Disc frame is built with Ritchey’s own heat-treated, triple-butted Ritchey Logic II CroMoly steel tubeset and a mix of TIG-welded and lugged construction. The headtube is a Ritchey proprietary tube with machined integrated headset cups for a light and strong solution that uses a straight 1.125″ steerer with the look of a classic thin headtube. The fork is the WCS Carbon Disc Cross that we recently reviewed and ride on both our steel disc-brake test bikes now, with a special gloss black finish to match the frame. The fork is compatible with 140 or 160mm rotors, but the frame is 160mm only, so most builds will use the larger rotor.

The bike we tested was a 55cm, which isn’t listed on Ritchey’s site as an available size, but does make it into their geometry table. It is also available in five other sizes, down to a 49 and up to a 59. The complete bike that we test rode weighed in on our scale at 9.13kg (20.1lbs) without pedals, with a 2x Ultegra mechanical/hydro build. That’s a little more than a half kilo (or a pound) heavier than our steel SRAM 2x setup with the same wheels, fork, and similar spec’ed cockpit (although just under a kilo heavier than some carbon bikes we’ve tested recently). The difference in weight is a bit in the drivetrain and the rest in the tire+tube combo vs. our tubeless setup, and we suspect that this difference resulted in a lot of the slower feel that we noticed. 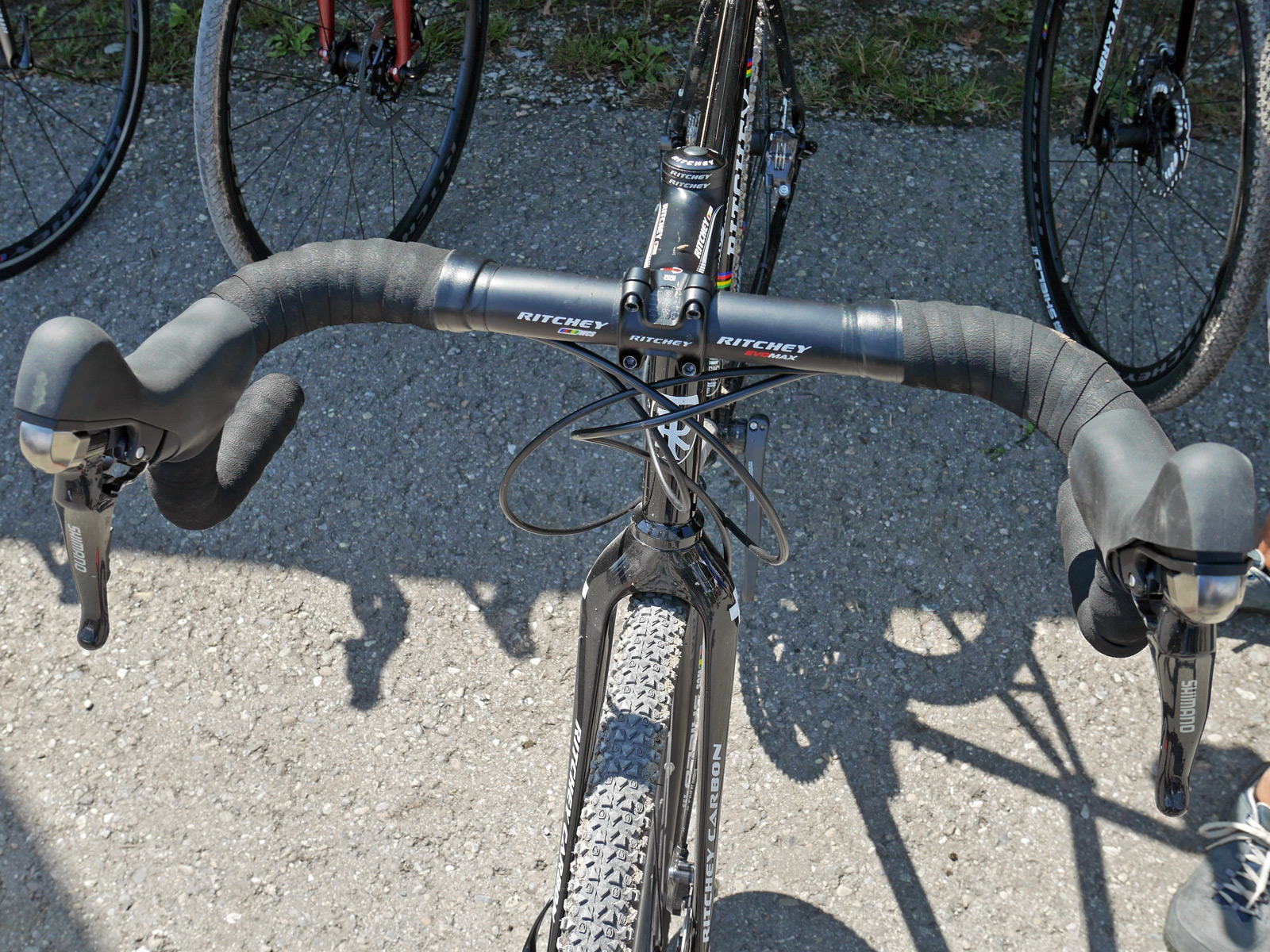 Ritchey had set this bike up with their new 12° flared EvoMax aluminum handlebar and Shield WCS tubeless-ready tire that we previewed at Eurobike. The bar seemed very comfortable in our short time on the bike. We didn’t do a lot of longer technical descending, so I didn’t spend too much time in the drops where the flare makes the most difference. But I did ride a bit in the drops (partially due to the higher frame stack than what we are used to), partly because the extra room around the wrists just made this a more comfortable and more relaxed  position that a straight drop bar. For cross and trail riding we’ve come to appreciate these subtly flared bars (also like the 3T Ergoterra) for the fact that they make it a little easier to hold on when the going gets rough, without resorting to a wider bar that compromises the aero position in the drops.

As for the new Shield WCS tire and its squarish tread profile, I didn’t get the best impression from the limited time on the bike, without much chance to really dial in the tire pressure. While the new WCS level tire was introduced as being tubeless-ready, the bike I rode was setup with tubes. That means that the already wide 35mm tire, with its already reinforced tubeless casing, then got a butyl tube inside, and a bit too high tire pressure looking back on it. All of those elements added together to make for a sluggish feeling tire that even made the wheels feel slow. And we know that not to be the case. We’ve been riding the same WCS Zeta Disc wheels set up tubeless with some light 33mm Hutchinson tires over the last month at low pressures (~25-28psi), and the ride has been fast and light. We suspect that the wider Shield tires will come into their own when set up tubeless and at those low pressures, we just haven’t had a chance to see for ourselves yet.

this is a sweet bicycle. Ritchey has been really doing cool shXt in his older years

“That being said the $1300 frameset (including frame, fork, and a drop-in bearing headset) still demands a premium over many mass-produced steel bikes. ”

Sorry but comparing this to a Surly, Soma or most other production steel frames is just plain dumb.

A more legitimate concern – which the article completely misses – is the very limited clearance at the fork crown. Curious to see how this bike fares in a truly muddy race.

Why is it dumb to compare one Taiwanese frame to another? What makes Ritchey tubing any different from Charge or Soma if they’re all made by Tange?

Nice bike! Thomas Frischknecht used to compete in the European Cyclocross seasons for over a decade! Still light being Steel.

Chris L: the fork crown clearance is fairly generous when using tubulars, btw., comparable to e.g., Enve forks. it’s the combination of clincher wheel and a tall tire in the abovementioned setup which makes it a potential issue.

Really? 25-28psi on tubeless and no problems with burping? I’ve only been able to go down to ~35psi on Stan’s rims/Vittoria tnt cx tires. Anything less will burp in a corner.

@Jayson, I’ve run as low as 22 PSI on the Stan’s 350/Vittoria XG TNT combo with no burping, but i’m pretty light. I suspect overall bike/rider weight has a lot to do with it.

I purchased the Swiss Cross Disc earlier this year and it has been great. Set it up with SRAM CX1 groupset and had mine down to 8.7kg with pedals and bottle cages. Ride it on road with 28c tyres and 42t front chainring, swap to 35 – 40c tyres and 38t front chainring and it is good to go gravel riding. Very comfortable over any distance and terrain. Really enjoying it.

Hey Mark – can I get more details on your build? About to build one up with CX1. What wheels and finish kit did you use?

@jayson Yes, that low pressure has been stable so far without burping at all. The fit between the Hutchinson Toro tires and the Zeta wheels was the easiest, smoothest tubeless install I’ve ever had. Literally just popped the tires on by hand and they sealed with a standard floor pump. Didn’t even need to remove the valve core to get a seal. I wish all tubeless setups were so easy. At that pressure, we’ve had a lot of rim strikes, but no burps yet, although they haven’t seen much cross off-camber yet.

LOL! Get with the times Tom. It’s 1985 and steel is real. Oh wait a minute. Marty McFly just arrived. It’s actually 2015 and he says his titanium DeLorean is the business.

Steel is heavy. Like as in dense. And BTW, this bike needs thru axles too.