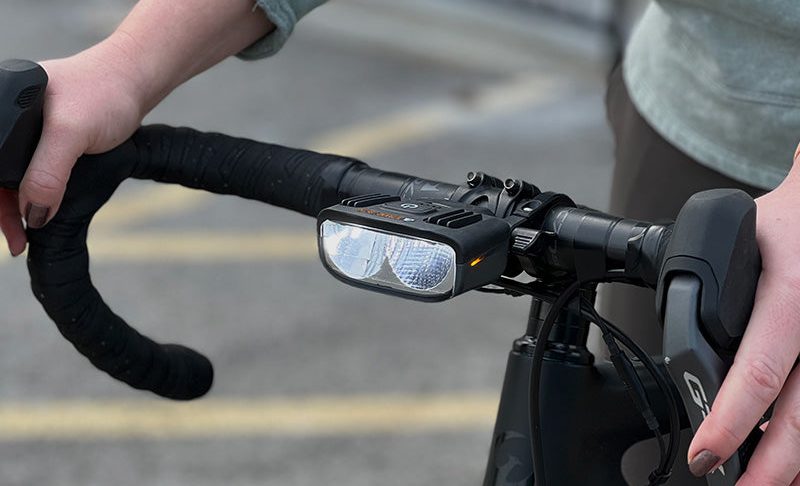 Outbound Lighting built a team of engineers with a wealth of automotive experience, so it’s no surprise they would use that know-how to craft a bike light that draws upon technology usually found in cars. 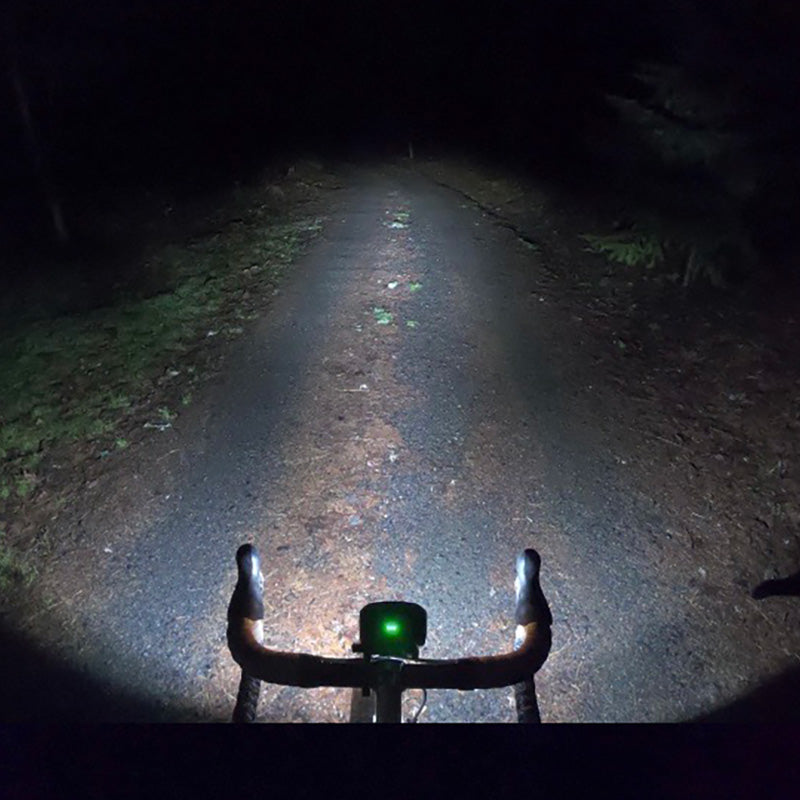 Outbound’s latest handlebar-mounted light, the Detour, does precisely that. It is specifically designed for cyclists riding on roads, whether commuting or putting in significant road miles, or exploring gravel.

It lights up the path using Cree XD16 LEDs and Samsung 21700 cells packed into a thermal-conductive polymer that makes it light and bright. Outbound says the Detour can run for about three hours. 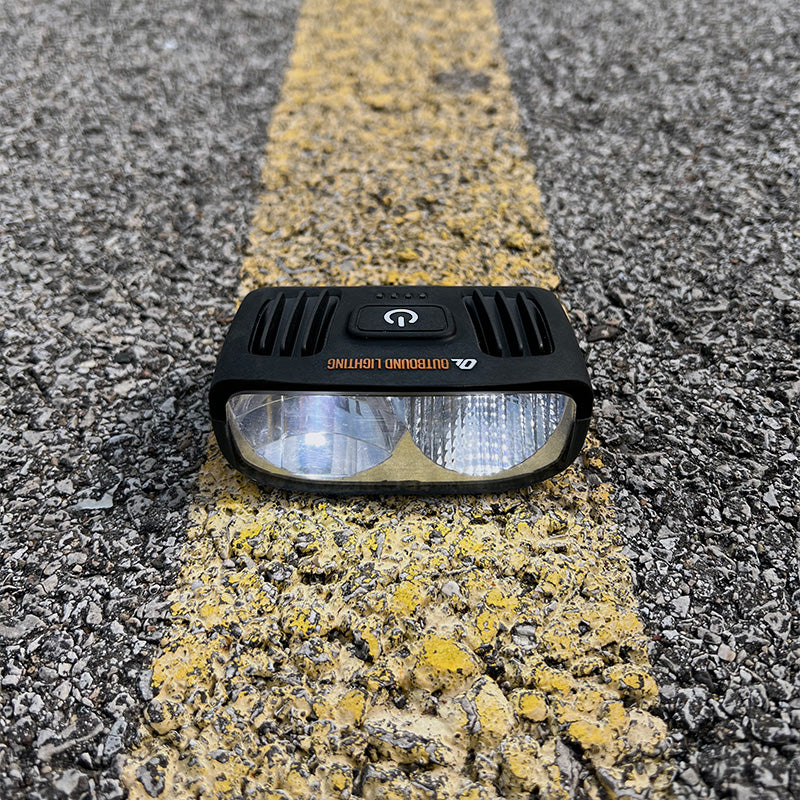 The critical tech feature in the light is its horizontal cutoff beam that keeps the light down on the road ahead, rather than allowing light to hit runners, cyclists, or drivers coming from the other direction.

Outbound says that feature, similar to the tech used in cars, directs the light exactly where it needs to be and saves energy by cutting down on the excess light riders don’t need. While its horizontal cutoff blocks the light front drifting too far skyward, it has a broad field that illuminates the entire width of the road. 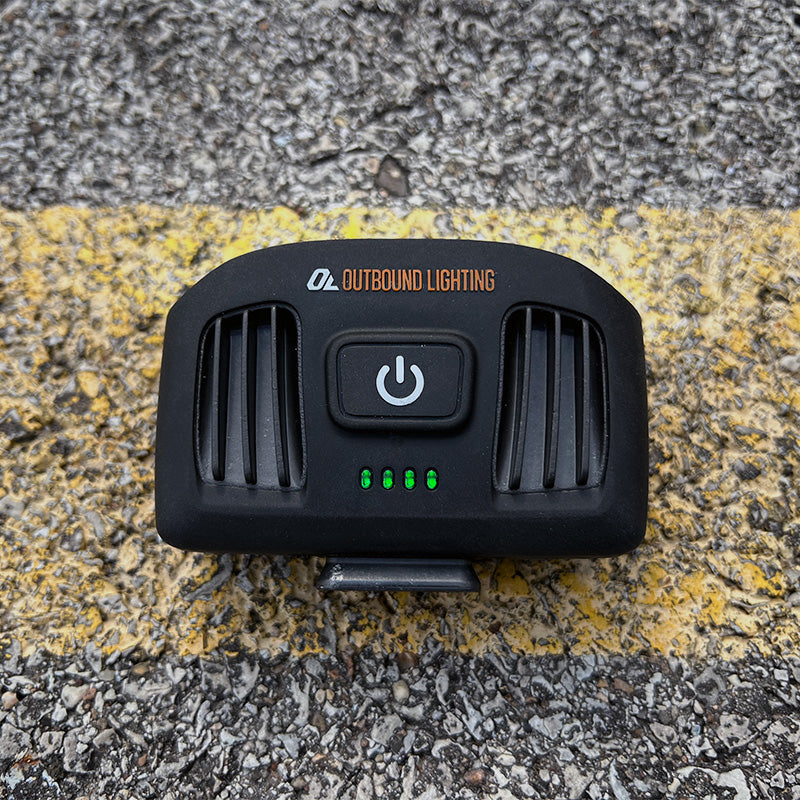 Outbound Lighting’s new Detour bike light has a single, soft-button interface that is easy to use while wearing gloves.

The Detour mounts to 35 to 31.8 mm handlebars via a bolt-on clamp and reinforced nylon mount equipped with a quick-release tool that makes mounting and removing the light simple. It also is available with an action camera-style mount that fits under a GPS.

The Detour is simple to use with a single, soft-button interface, even while wearing heavy winter gloves. It has four green indicator lights showing battery level and mode, including daytime strobe, nighttime pulse, and constant output.

Outbound Lighting’s new Detour bike light is available for an MSRP of $179.

Outbound Lighting gave riders a glimpse of the Detour at the Sea Otter Classic earlier in April, but it hasn’t quite hit the shelves yet. The light goes for an MSRP of $179 and will likely be available starting May.

Find out more at the Outbound Lighting site.

I’ve heard lots of praise for Outbound’s lights from the MTB community, so I’m very curious about this from-the-ground-up road bike offering.

I’m a little concerned about the mounting, though. A lot of road cyclists have a computer on an out-front mount on their bikes; won’t that interfere with this light? Curious to see if there are alternate mounting options before resorting to a stem mount for the computer.

Yes, there are options for mounting. They offer a GoPro style mount, that will allow you to mount it under many computer mounts. Also, the handlebar mount pictured is the same one as their newest MTB light, which will allow you rotate the mount downward, and still aim it correctly, so it sits under your computer mount. That’s how I’m currently running my Trail Evo light from them. I’ve owned all their lights so far, and they’re the best I’ve used.

I’d love to see these guys (or anyone else that wants to offer with a proper beam spread for a road light) come out with a version intended to be mounted inverted on a GoPro style mount under a computer.

There will be an adapter for this, no worries. 🙂

Outbound will have a simple adapter for exactly that when Detour launches, so you’re in luck!

“It also is available with an action camera-style mount that fits under a GPS.” Isn’t this what you’re asking for?

best light i’ve EVER owned! …and you can’t beat the price either! with the supplied mount, I have no problem mounting it below my forward mounted Wahoo computer and adjusting to the proper position. I also love the easy on/off quick release.

I thought it wasn’t available yet.

Have you tried the Garmin head light? I use it for night gravel and road.

I have the Enfitnix Navi800, which can be inverted tool-free for this sort of application. I mount it inverted in a GoPro mount under the computer on my roadie and right side up above the bar on my commuter, with the cutoff on top either way.

Plenty of light and battery life, switchable batteries if you need more and superb light distribution.

I’ve had a couple of Busch & Muller dynamo lights, also very good beam. This is even better!

It also is available with an action camera-style mount that fits under a GPS.

It can work. I use a KOM Cycling mount with an Outbound Trail Evo. Been doing that for over a year now. You have to adjust the clamp arm down and then rotate the faceplate to get the level you want, then make sure you have enough clearance to be able to push the power button. It is a tight fit but it’s functional.

I would love a list of lights with cutoffs that are meant to be inverted. I have a Fenix BC30 on my commuter bike mounted inverted, I removed the lens, did a bit of sanding, then flipped it over so the cutoffs work correctly. Did it years ago and still going strong.

Thanks! This is exactly my setup.

I did see the responses about the GoPro adapter mount, and that’ll work great on mine. I availed of KOM Cycling’s underslung GoPro adapter for their computer mounts, and I currently have an inverted Cat Eye Volt 800 snapped onto it via another adapter piece.

I also saw Gravel Cyclist’s YouTube video from Sea Otter 2022 where he paid Outbound Lighting’s booth a visit – and that showed the Detour light clicked into the GoPro adapter mount.

Folks like us are gonna have options, at the very least. Which is good!

I thought the same thing, I have my light under the computer now.

Useless on 90% of road bikes because that’s where everyone’s computer is at.

Read the article and comments above, there’s an adapter for under-GPS mounting, problem solved. That and the stock bar mount has enough adjustability to clear many outfront mounts tucking the light underneath. Whatever the setup, there is a solution.

B&M dyno lights have had a horizontal cutoff for years now. Glad to see other manufacturers following suit.

Yep, nothing ground breaking here in terms of actually having a cutoff beam pattern, STVZO specifically calls for it. The main difference is the literal obsession we have over perfecting the beam pattern so that it is extremely smooth, well balanced, and a good blend of outright power and battery usage. Combine that with a solid mounting solution, pass through usb-c charging, simple interface, and long run times, those are the features that we really focus on to create a great light. 🙂

PDW has one for several years: The PDW Pathfinder.

It is a no go for me for the simple reason the two projector housings are different for some reason. I don’t consider myself that ocd, but that would drive me crazy. Also it appears their helmet mounted light would work with the GoPro style mount that came with the computer mount that my bike was spec’ed with, is less money, and also is symmetrical, and nearly the same lumen count. The cutoff thing doesn’t really entice me either. I try to ride at night on roads where cars aren’t around anyway.

Hands-down the best lights out there

Is there/will there be a Dynamo version? USB light seem to go dark when most needed…

This beam cutoff design is not new for cycling, Schmidt (sp) has been doing this for years in order to be rated legal in many coubtries.