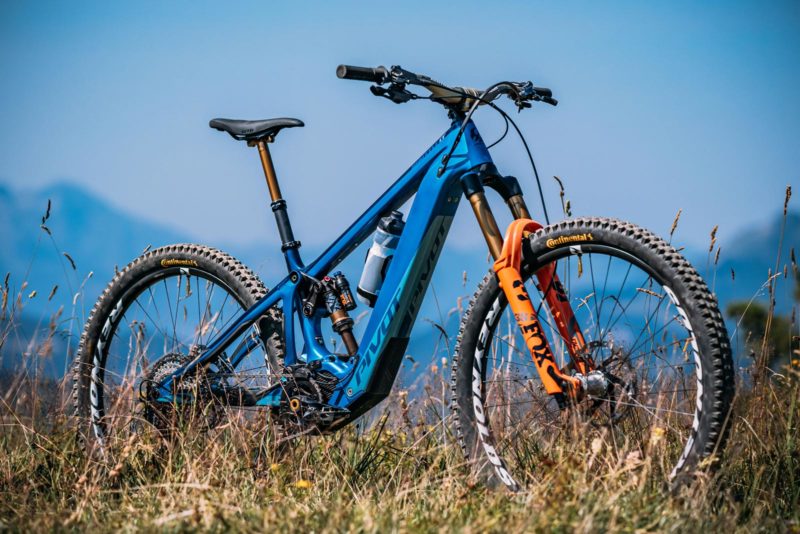 Pivot recently announced the Shuttle SL, their Fazua Ride 60-equipped super lightweight eMTB aimed at those who subscribe to the idea that less is more. While the lighter, less powerful eBikes appeal to riders looking for a ride experience more closely matched to that delivered by a regular mountain bike, others want more. A lot more. Handy then, that the Pivot Shuttle LT delivers just that. 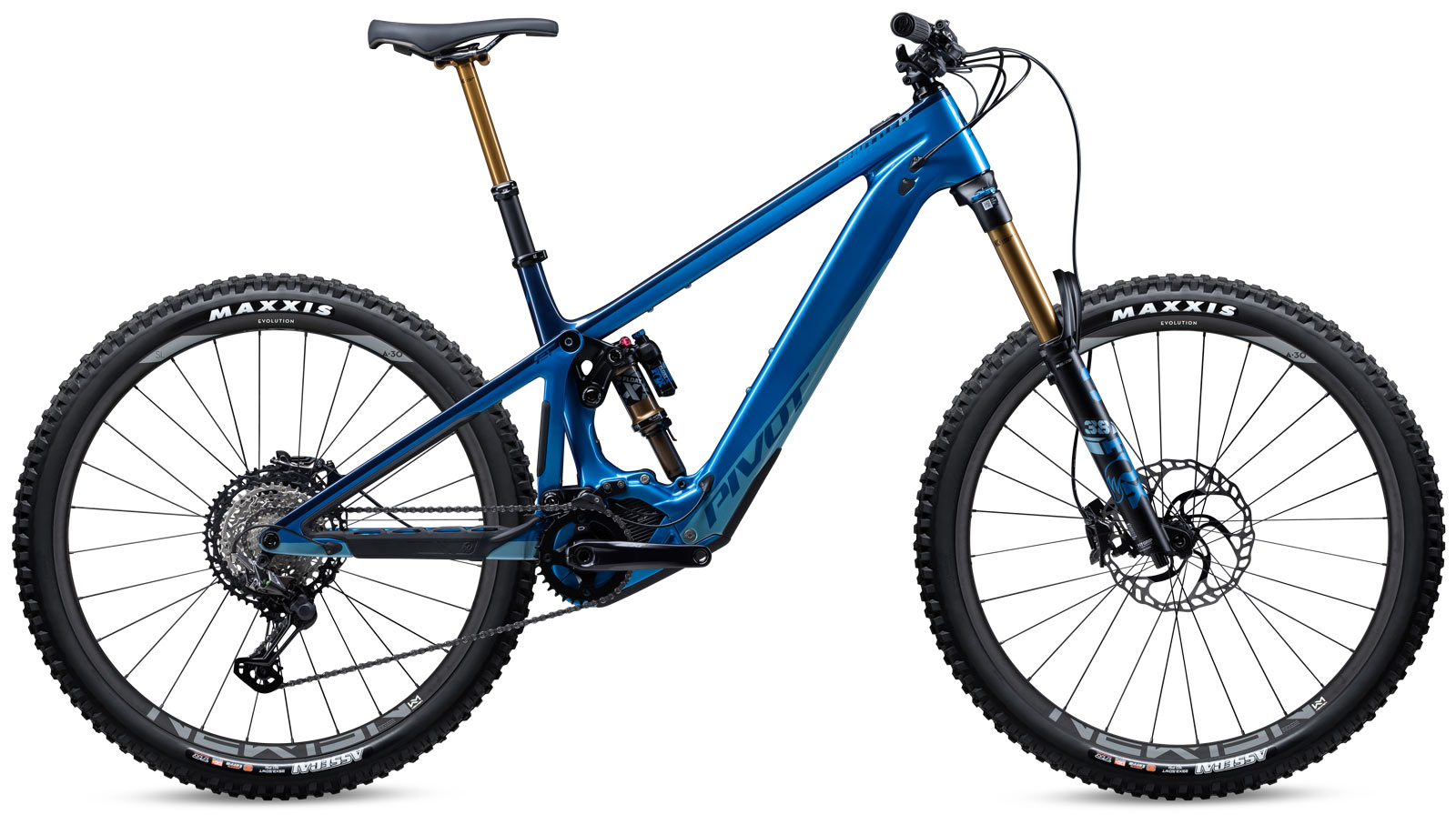 More of what exactly? Well, everything. More travel, more battery capacity, more range, but also more attention to detail, apparently. The Shuttle LT completes the Pivot eBike trilogy with a 160mm travel enduro-inspired option slotting in alongside the 140mm travel all-mountain oriented Pivot Shuttle, which remains in the lineup. Taking cues from Pivot’s EWS enduro race bike, the Firebird, the Shuttle LT is a complete 29er, pairing a 160mm travel dw-link suspension platform with a 170mm fork with an eBike-specific tune. 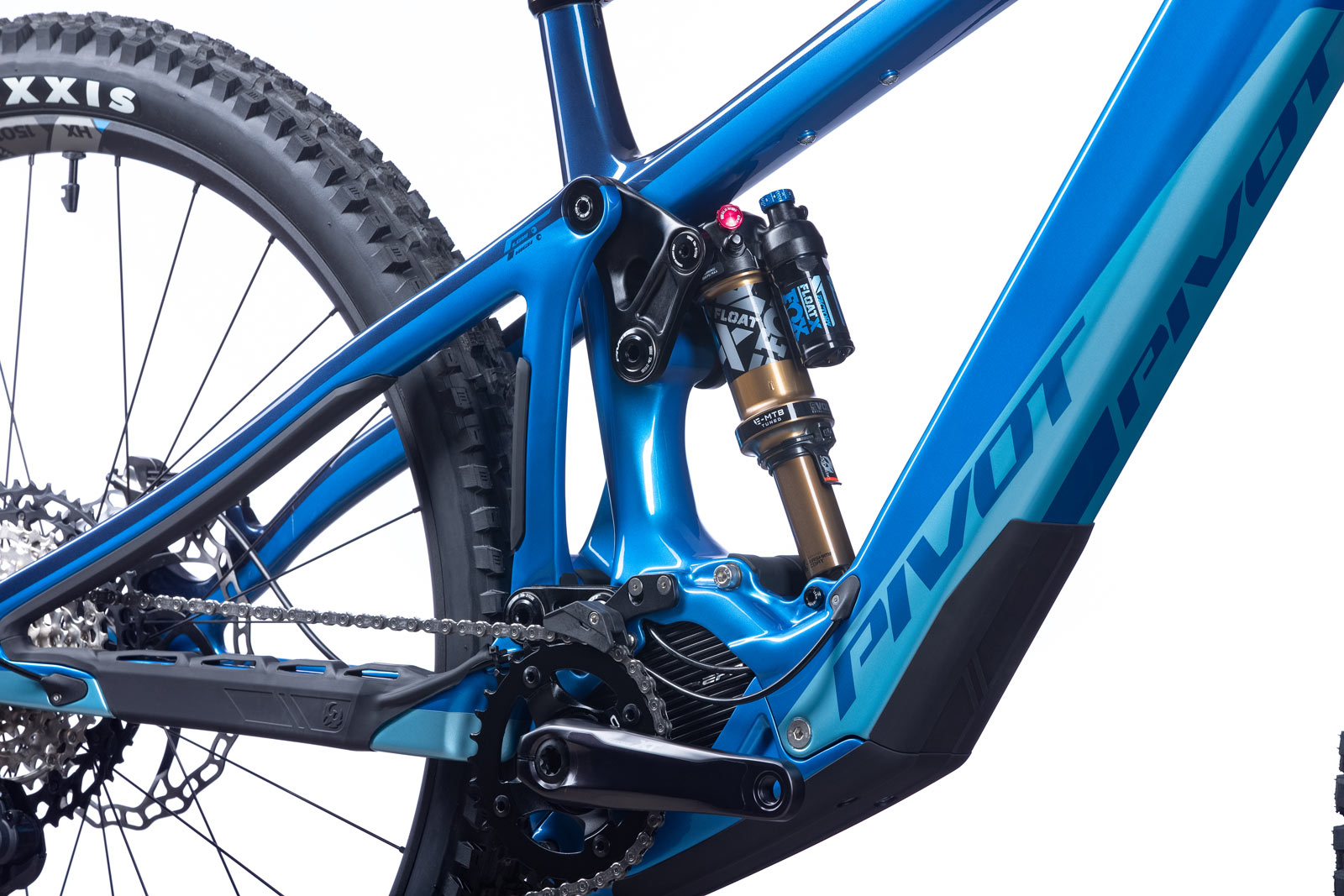 Pivot are sticking with the Shimano EP8 drive unit for the Shuttle LT, pairing it with an even bigger battery this time. Inside the downtube sits a 756Wh battery, with 30Wh more capacity over the Shuttle’s battery. The motor provides a maximum torque of 85Nm and a maximum power output of 500 Watts, with a continuous power rating of 250 Watts.

“You’ll instantly recognize the balanced and planted feel you expect from a Pivot, yet without giving up the ‘pop’ we’ve bred into all our EWS-inspired bikes. We really pulled out all the stops with the Shuttle LT. This bike has the heart for enduro racing and is still the bike you’ll want to ride every” – Chris Cocalis, co-founder of Pivot Cycles. 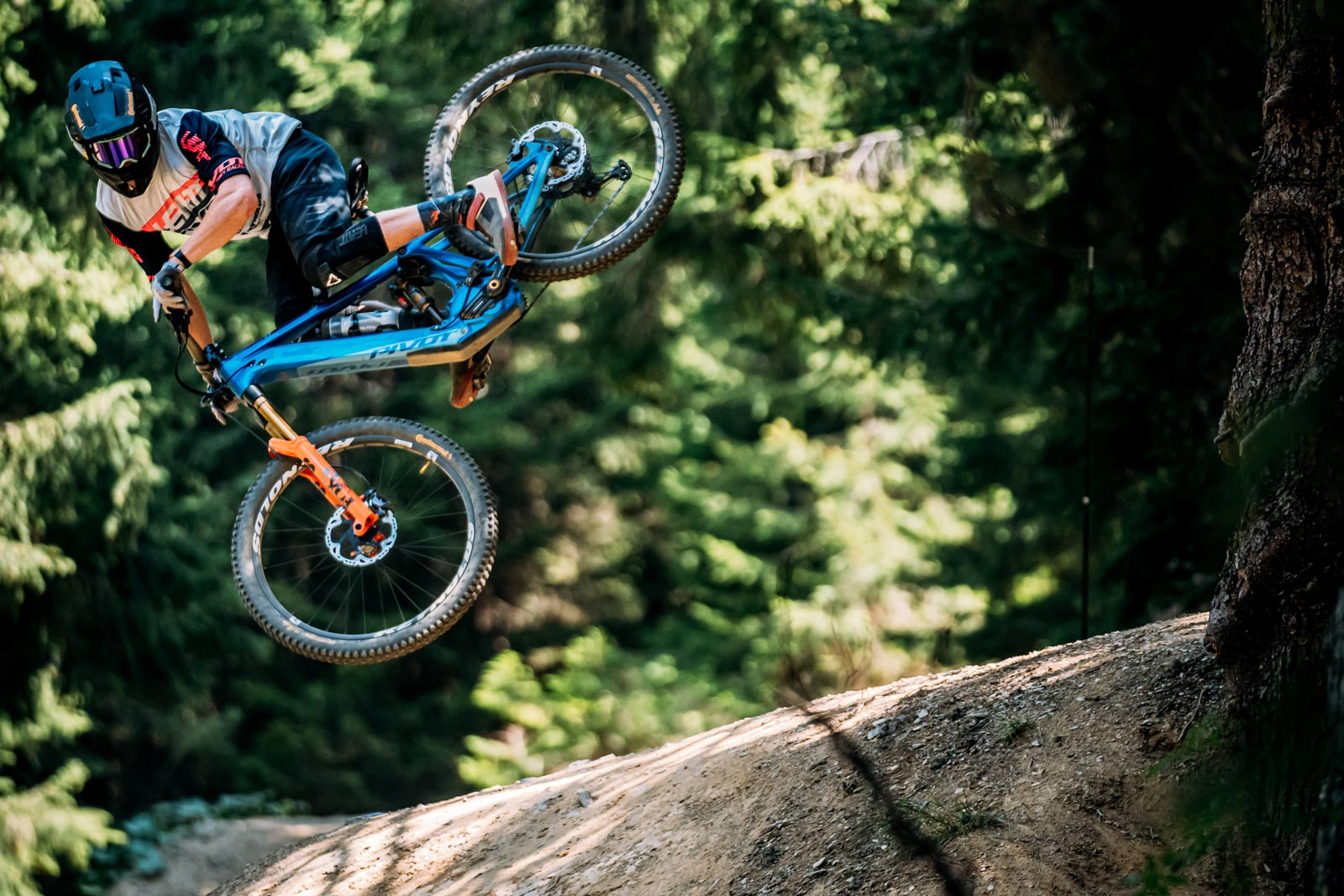 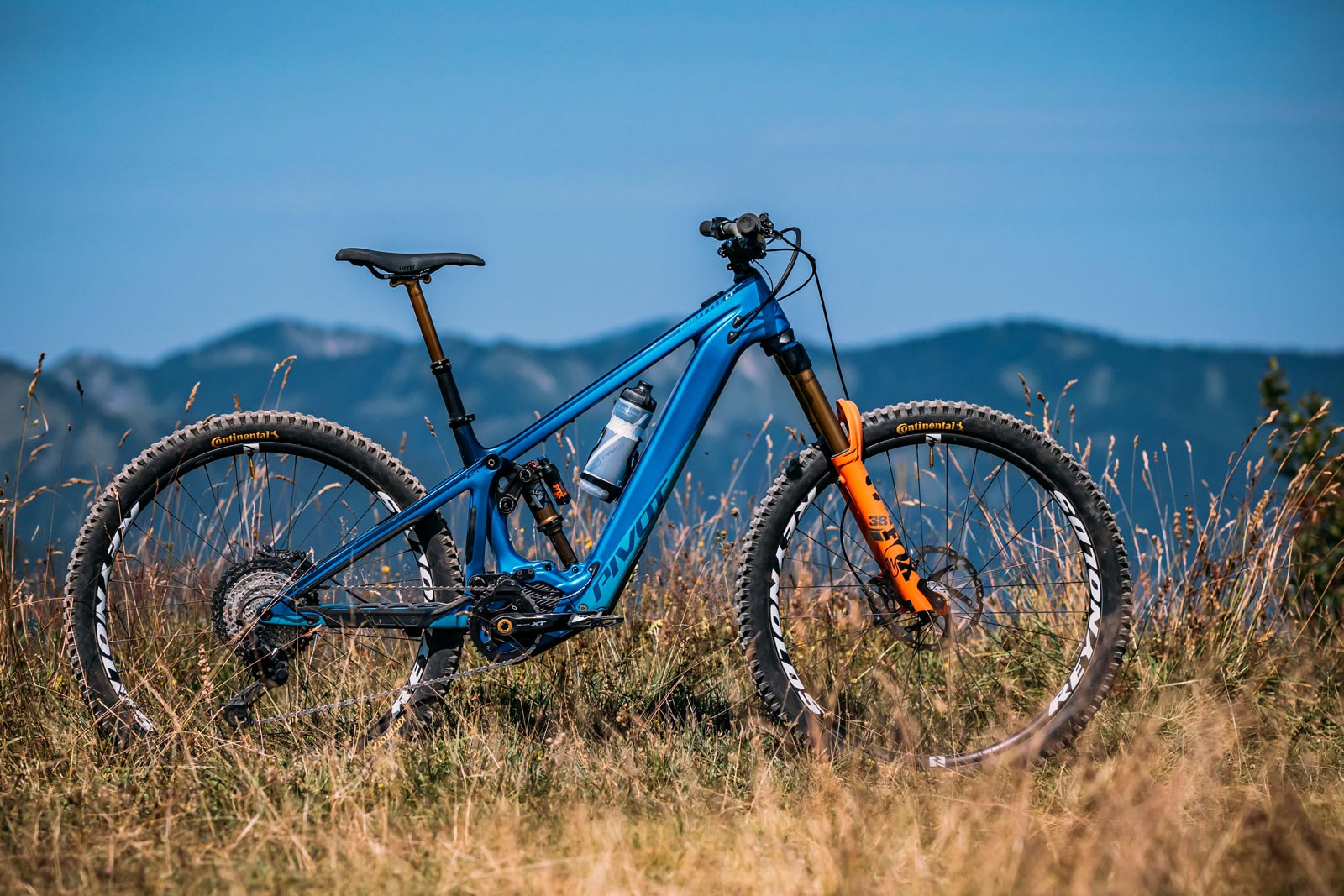 Aesthetically, the Pivot Shuttle LT is distinct from its shorter-travel all-mountain sibling thanks to the vertical shock placement within the front triangle. This layout is more similar to that seen on their EWS-inspired enduro bike, the Firebird. Despite the differences, this is simply another iteration of the dw-link suspension platform that Pivot has used for over a decade. The are two co-rotating links between the swingarm and front triangle, the upper one of which drives the rear shock. 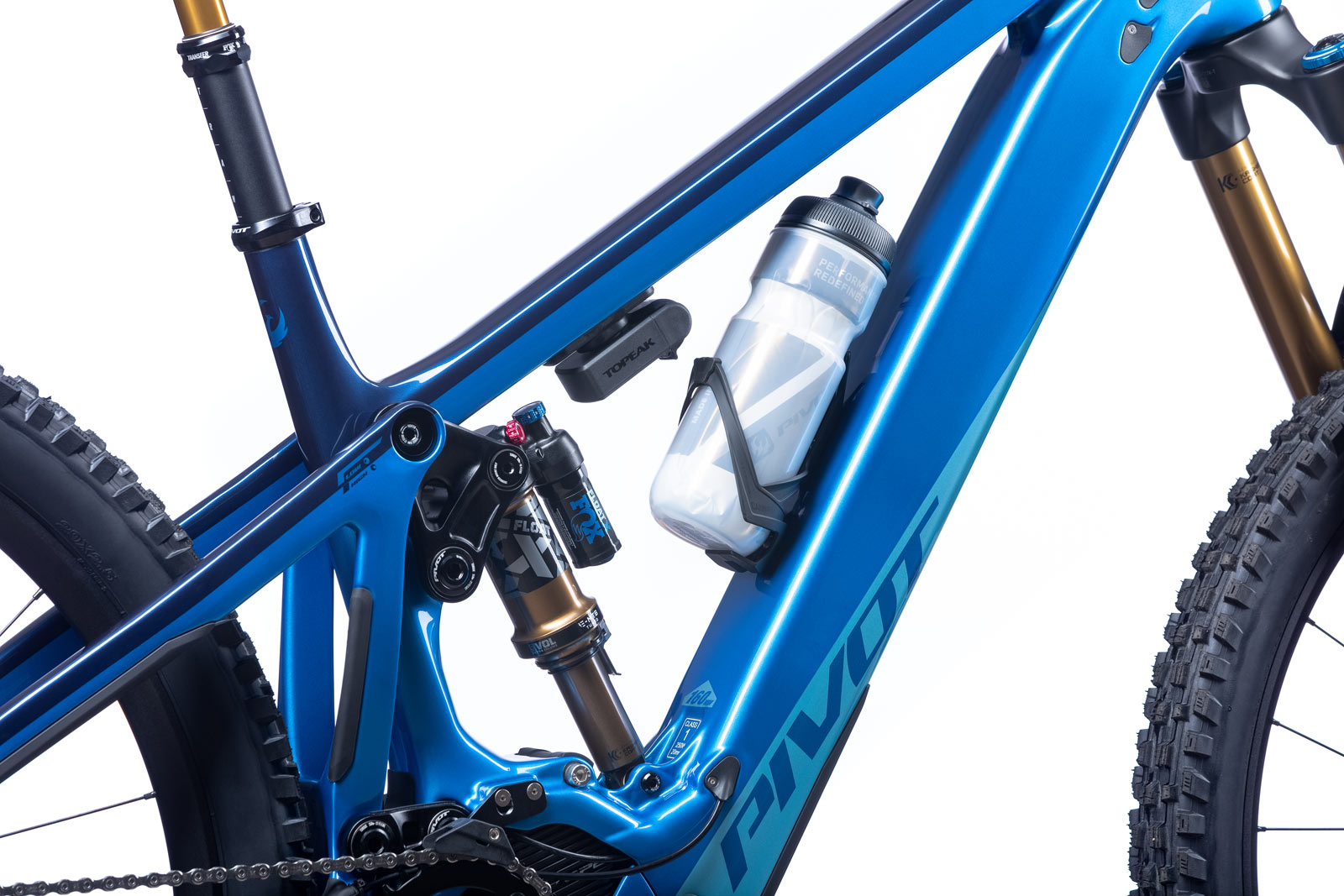 The Pivot Shuttle LT has clearance for a water bottle inside the front triangle, and the Phoenix Dock Ninja Tool from Topeak

Pivot tells us that the vertical shock placement does have its advantages over the horizontal layout seen on the Shuttle. First off, it makes for a lighter weight design as it requires less carbon material, it results in more space for a water bottle inside the front triangle, it offers more scope for increased shock rate progression, and it allows Pivot better control over the bike’s standover height.

Both the Ride and Team models of the Pivot Shuttle LT both come with 205mm x 65mm air shocks, with a Trunnion style upper mount. The rising rate leverage curve is, however, said to work well with a coil shock, too, such as the Fox DHX2. 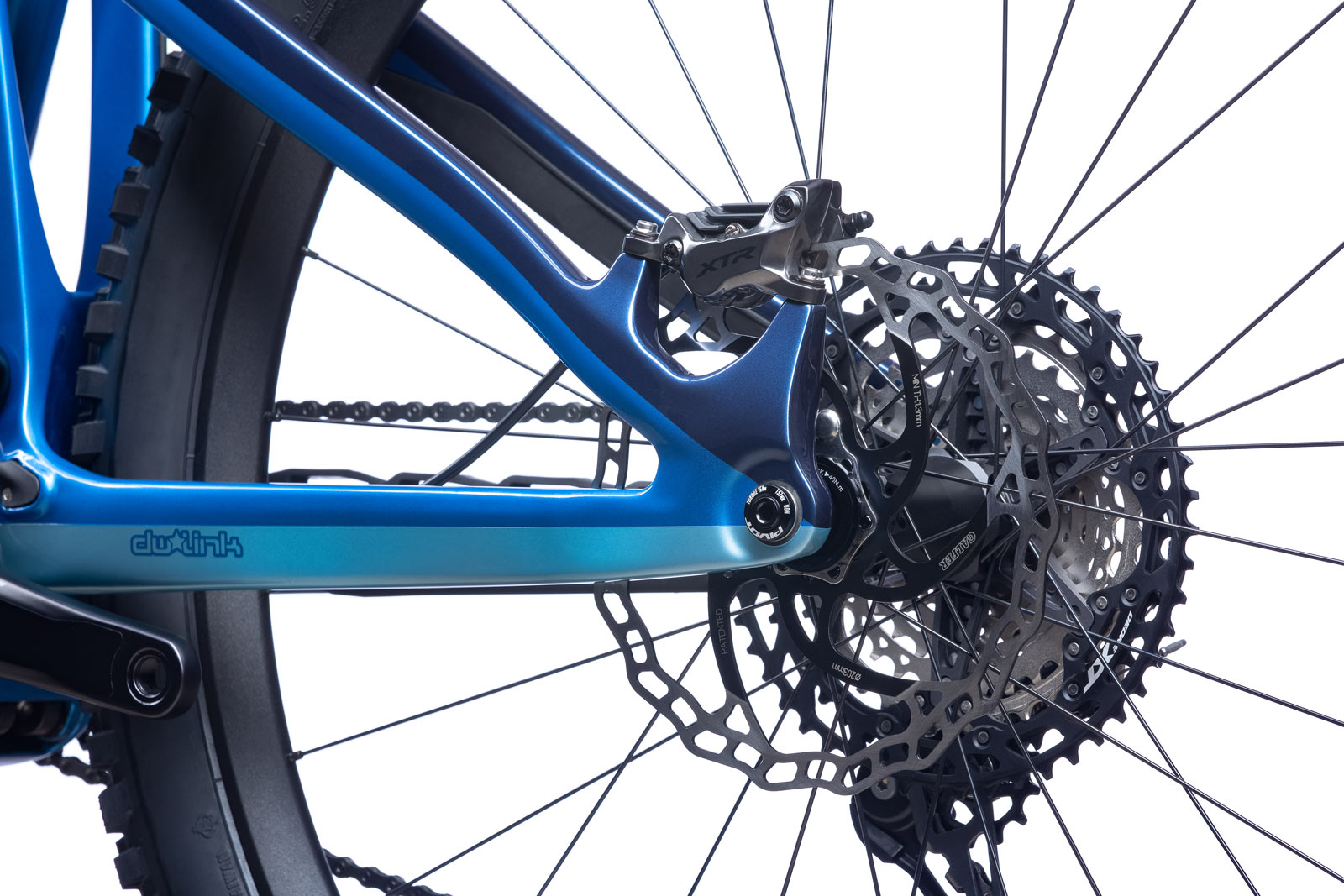 Like the 140mm travel Shuttle, the Shuttle LT has Super Boost Plus 157mm rear-end spacing for the increased rear wheel stiffness that comes with the wider spacing of the hub flanges. The rear brake works with a 203mm rotor only. The caliper is directly mounted to the swingarm; there is insufficient clearance for a larger rotor. 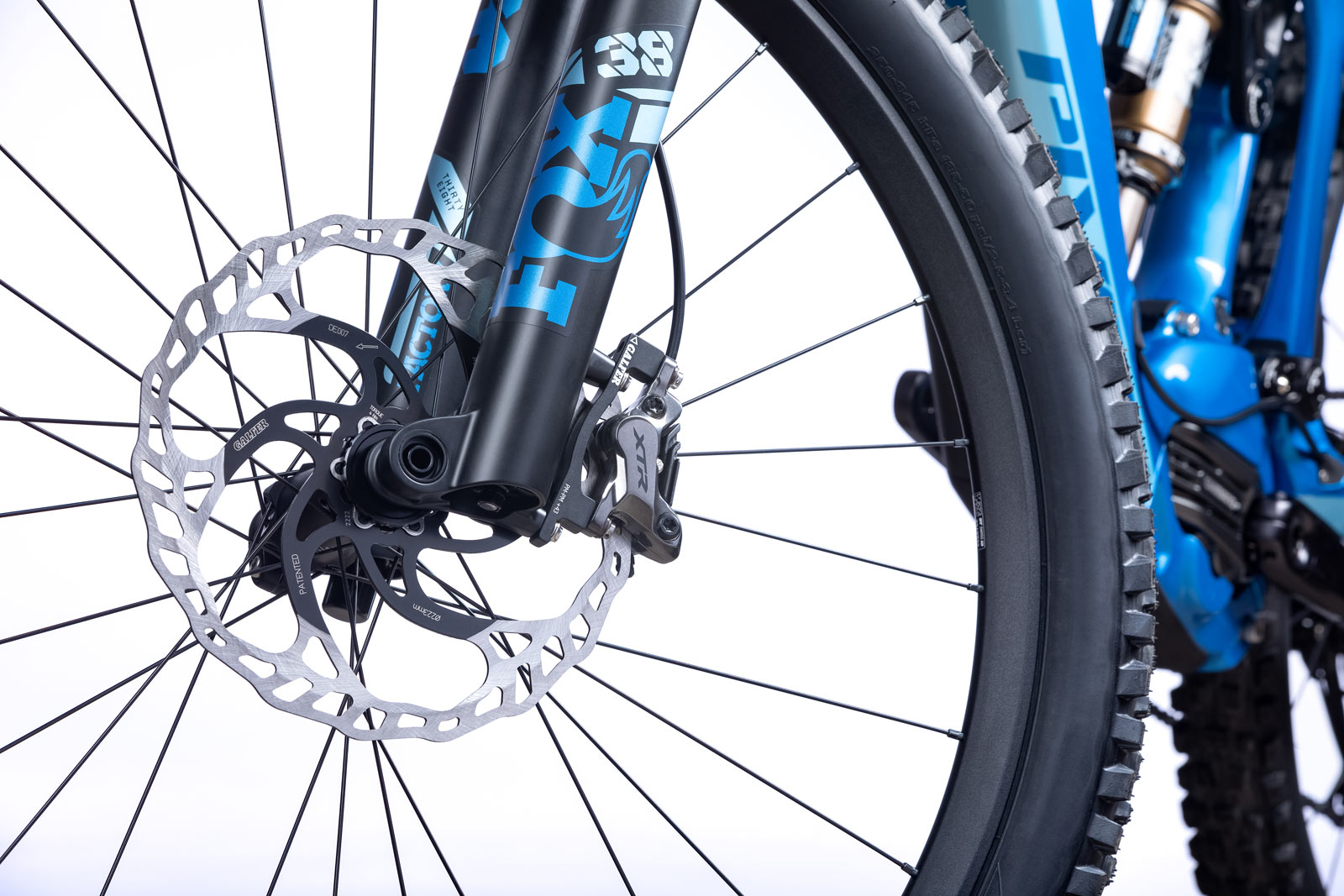 On the fork, a Galfer post mount adapter positions the caliper for a 223mm Galfer rotor to provide more powerful, consistent braking up front 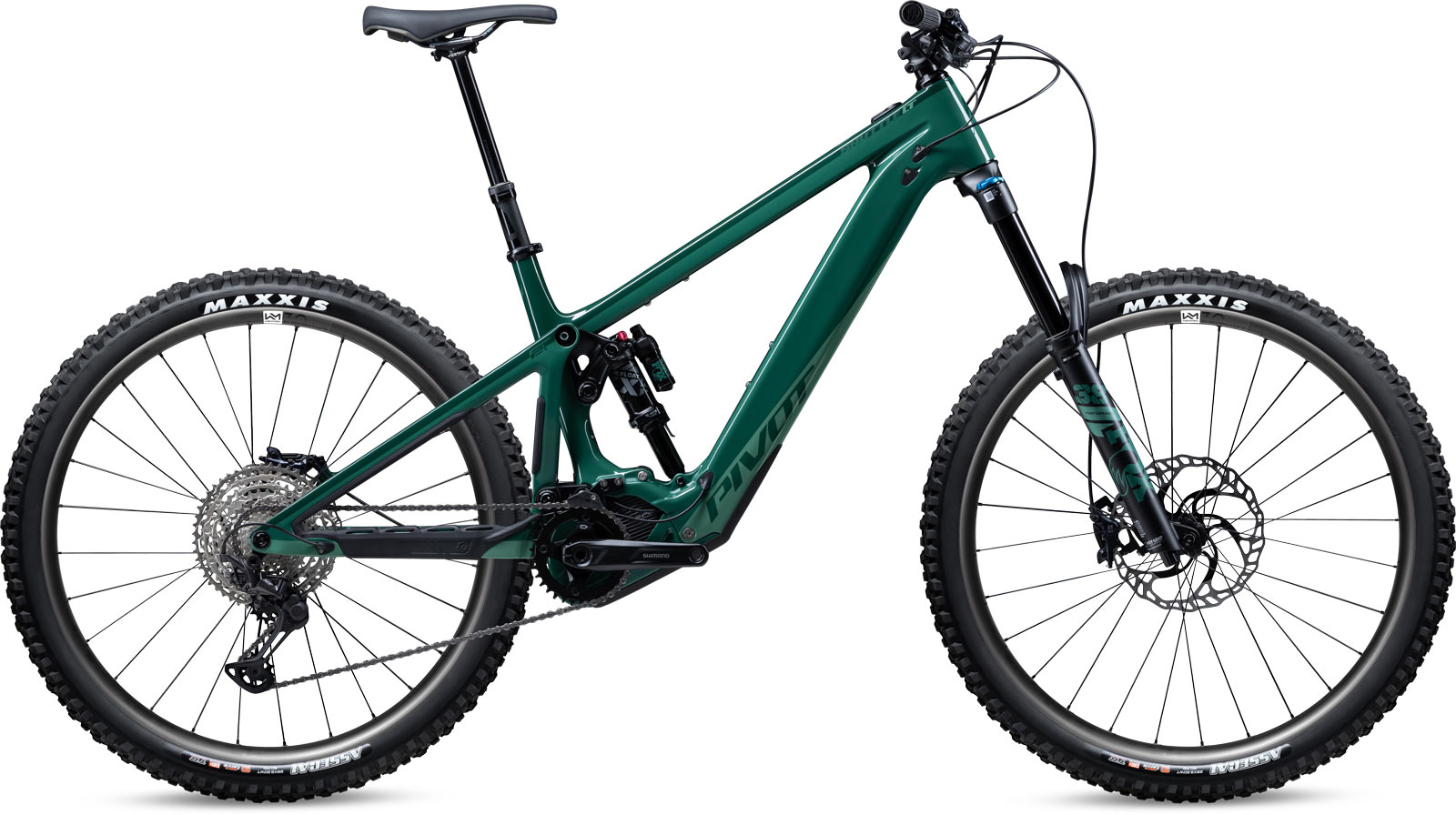 The Shuttle LT is offered in sizes S-XL with rear-center lengths consistent throughout. The range should accommodate riders from 5′-3″ to 6′-1″ and beyond. Seat tube lengths are impressively short, though, and should allow riders to base their purchasing decision on Reach without too much concern for standover clearance.

There are two possible geometry settings thanks to the inclusion of a flip-chip at the swingarm-rocker interface. The bike is shipped in the low position, wherein the head angle is 64°, the rear-center length is 441mm, the seat tube angle is 76.5-77.5°, and the bottom bracket drop is 22mm. This mode is recommended for riding fast, technical and steep terrain. 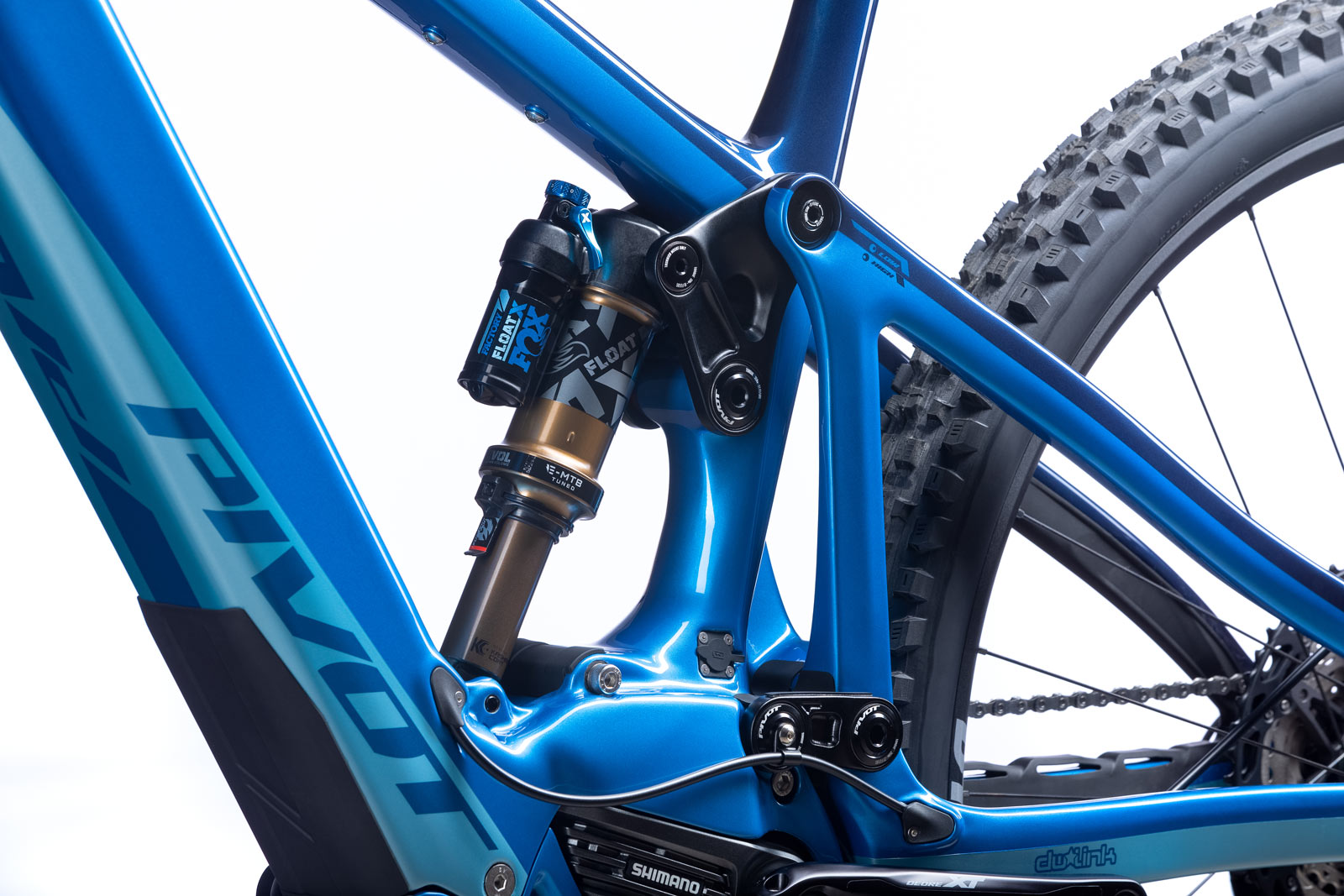 Switching the flip-chip to the high position raises the BB by around 5mm, making for improved pedal-ground clearance. This is recommended for riding through choppy, undulating terrain where you’re more likely to get tripped up by an ill-timed pedal stroke. Concomitantly, the high position results in a steeper head tube angle of 64.5°, and a steeper seat tube angle of 77-78°. I quote a range for the seat tube angles here as Pivot adjust this for size, largely to ensure that taller riders don’t end up with a massive rear wheel bias when in the seated pedaling position.

The Shuttle LT is designed for 29″ wheels, primarily. They do, however, approve the eBike for use with a 27.5″ rear wheel if you really want to run a mullet setup. For that to work, you’re going to need to put the flip-chip into the high setting to account for the lower bottom bracket height and slacker angles that will arise from the lower rear axle height. This would be an aftermarket upgrade, requiring a Super Boost 157mm rear wheel, and they also recommend a 2.6″ wide tire.

The bike lacks ISCG tabs, but does come with Pivot’s own upper chain guide. The maximum chainring size is 38t, but the suspension is designed to perform best with the chainline produced by a 34t chainring, thus this is how is the bike comes stock. 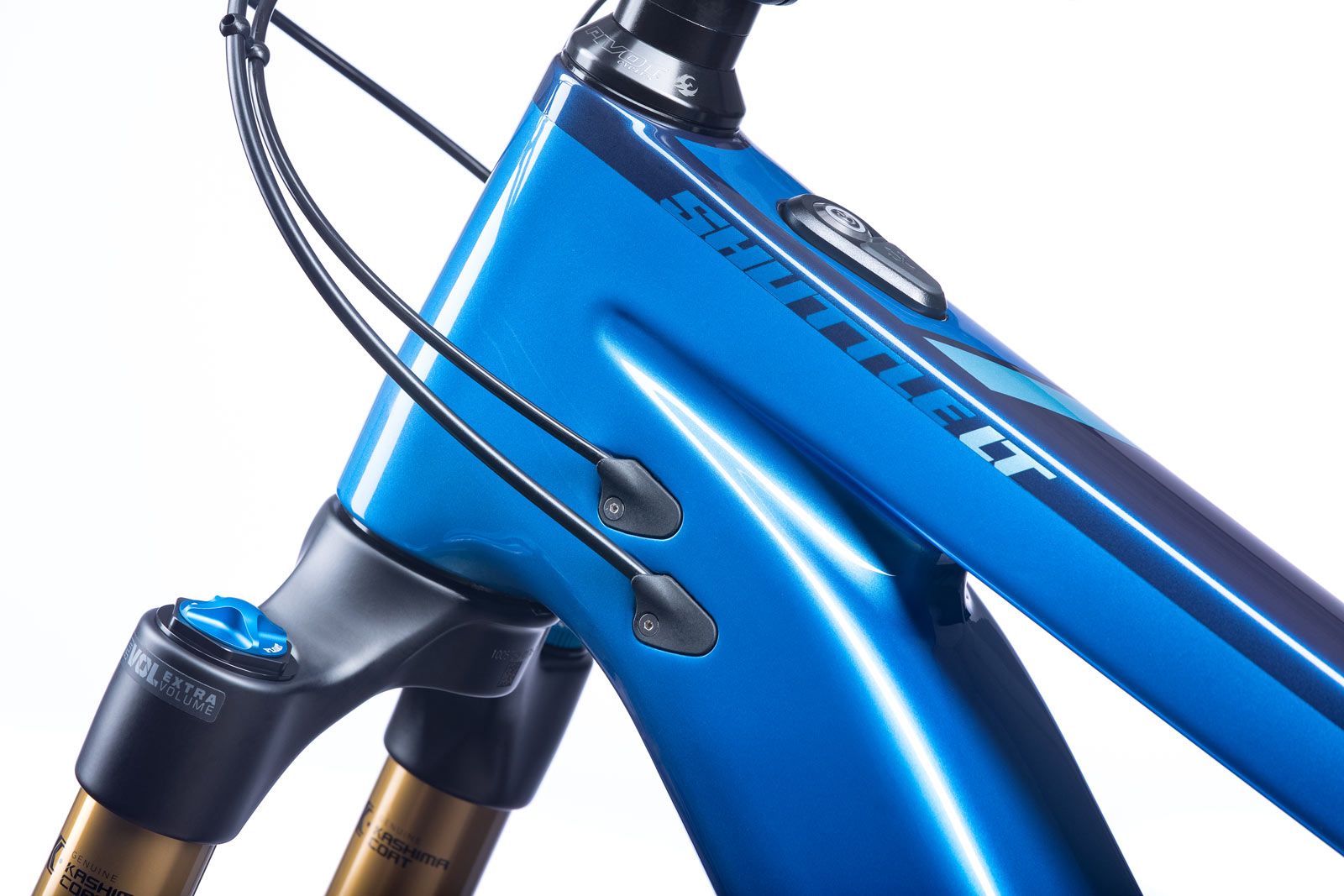 The Shuttle LT has internal cable routing but, thankfully, it is not internal to the headset

There isn’t really an entry-level option when it comes to the Pivot Shuttle LT; both the Ride and Team models are fairly high-end. The more affordable of the two is the Shuttle LT Ride. It boasts a Fox Performance 38 fork and Float X shock, a Shimano XT/SLX 12 speed drivetrain, Shimano SLX 4-piston brakes, e*13 Vario dropper seat post, DT Swiss Hybrid H1900 wheelset and Maxxis Assegai tires with the EXO+ casing. That one will leave you $9,899 / 9,999€ out of pocket.

Both the Ride and Team models are available in Northern Lights Green and Bass Boat Tri Tone (blue) colors.