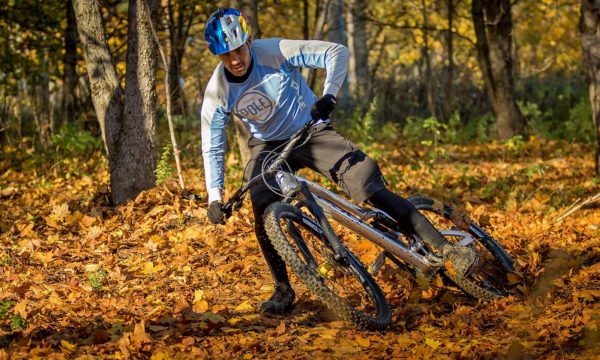 Only last fall Pole shared how they ditched far away made carbon for local Finnish CNC machined aluminum for their enduro Machine. The switch for Pole was much more sustainable, both economically & environmentally. But it also meant that development and production times could be cut dramatically. After the Machine, this new Stamina is the first bike for Pole to really highlight the improved efficiency. Developed and prototyped in a fraction of the time it previously took to craft a new bike, the Stamina is longer, faster, and heading to enduro races and you very soon… 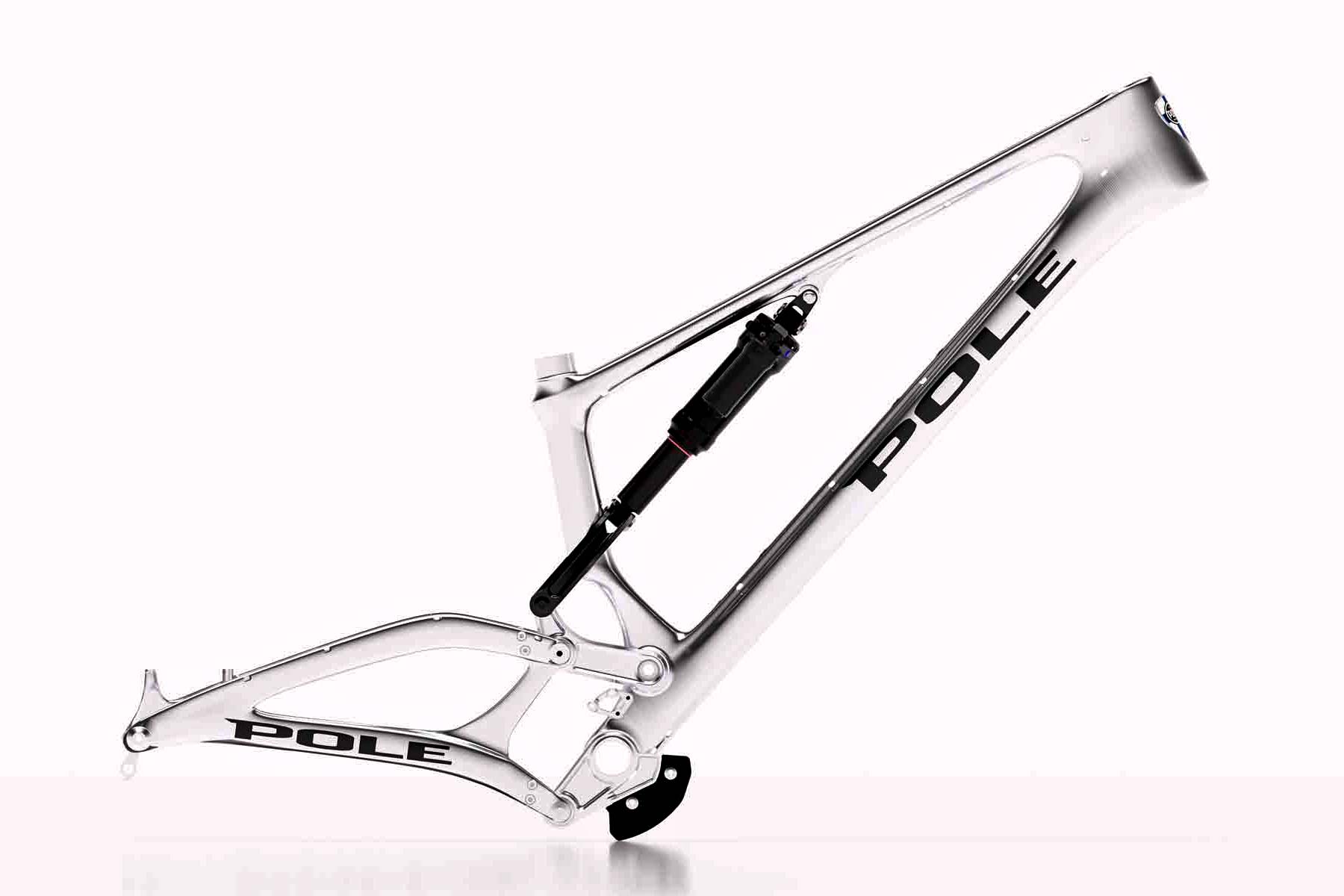 Only last month Pole already updated their original 160/180mm Machine, revising its machining to improve stiffness and update the bike’s overall aesthetics. No need for a model year update, keeping everything close at hand Pole can innovate and iterate on the go.

Now after looking to their upcoming pro EWS team sponsorship, Pole had an idea to develop the Machine further as a more gravity-fueled enduro race bike. Starting just in mid September, the new Stamina was designed in under one month. Then it went off to CNC tooling design and production in Finland, and will be tested by Pole’s EWS team by the end of this month.

The new Stamina carries over as a 29er now with a long 180mm of rear wheel travel to match to a 180mm fork. This is still an enduro bike, but now a gravity-inspired version that is pretty much a race-only ride. 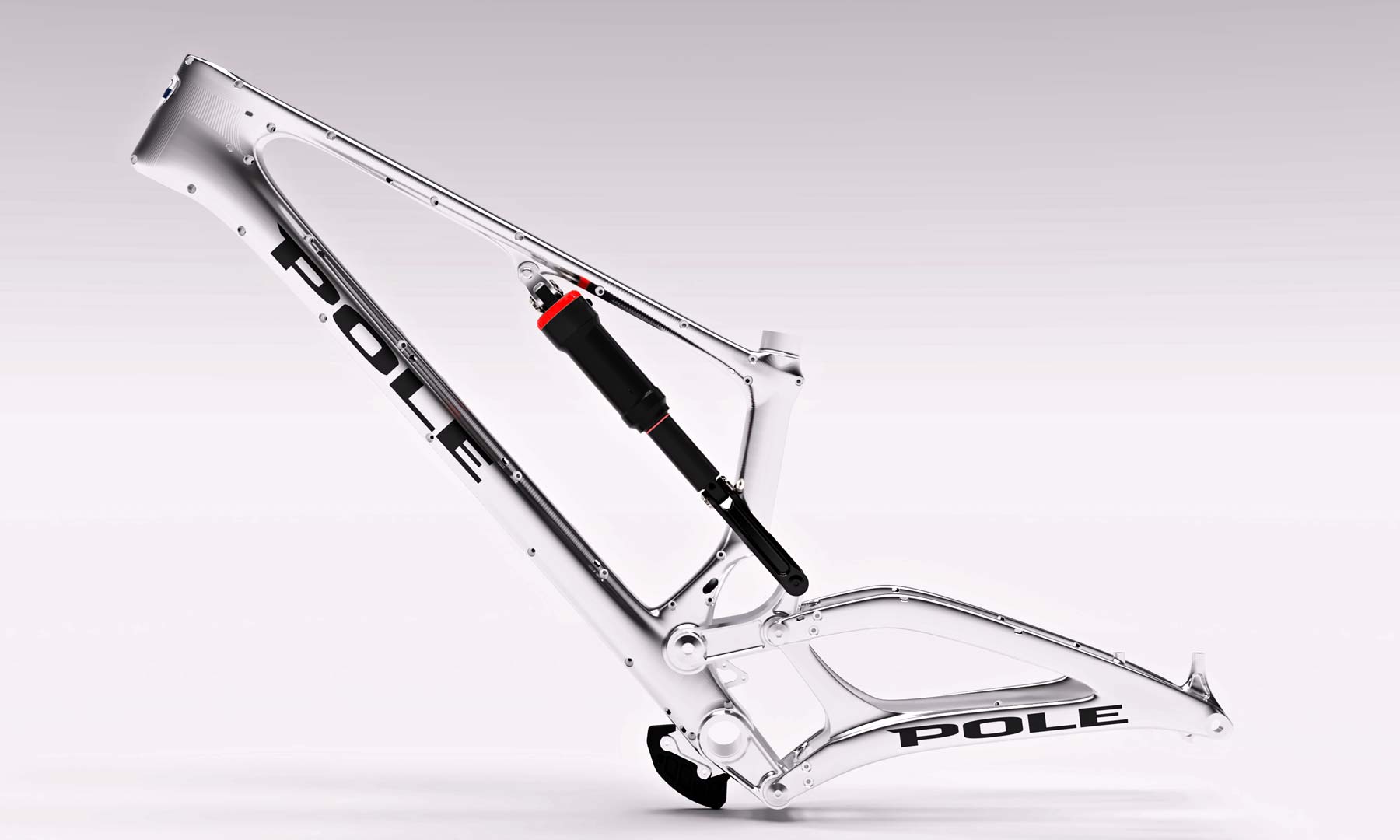 The new Stamina looks a lot like the existing Machine, but gets an all-new rear triangle, new front triangle & new links. Right now the new bike is still a prototype, with a couple of iterations to be tested by the team. But the speed of in-house and local development, prototyping & testing means you will actually be able to buy the new bike in early 2019. Pole says they can create the new bike from idea to consumer availability in about four months. It won’t stop there; apparently a shorter travel trail bike with the same playful concept is in the works as well, plus their long awaited DH race bike.

The short link suspension design is mostly the same as the Machine, but with a more symmetric arrangement, with more protected bearing placement and shock tucked away from mud behind the seattube. Now it also gets a massive 34.9mm seatpost to compensate for the shorter seattube. The new Stamina also switched to an integrated headset, machined into the heat-treated alloy sandwich frame construction. The new bike also folds more easily than the Machine around the BB-centric lower link, with updated cable routing & management.

Geometry is mostly the same as the Machine for now based on Pole’s Evolink 158. But it is still being refined in this prototype. Sizing also may get updates, with the idea of offering more in-between sizes to offer better fits.

While the Machine is meant to be an all-around trail-rideable enduro bike, the new Stamina is a gravity racing sled, taking that same progressive rear suspension design to the next, faster level. It is meant to be a longer long travel bike that pedals well, and is a blast to throw downhill whether on the trail or in a bike park.

I love Pole, they are a gloriously loopy company and somehow they make an all CNC bike workable. Nice to see long travel 29ers appearing en-masse as well (Radon just released one at the more affordable end of the market).

I would love to see the facts that back up how much more environmentally friendly aluminum is. I would be surprised if it is.

Claims that the aluminum is more eco friendly than carbon should be backed up with facts. And by facts, I mean math.

Aluminum is recyclable. And I’m under the impression that carbon fiber is not.

I believe per ton of material, CF production results in about 2x as much carbon emissions compared to Al. I don’t know how that translates to a bike as there are differing waste amounts. CF is hard to recycle into a comparable product, whereas Al is easily recycled. Recycling has its own carbon footprint, but for Aluminum its a significantly smaller footprint (less than 10% compared to virgin Al production…so about 20x less that CF).

Steel is has the lowest carbon footprint amongst virgin materials. Steel is real???

Does that carbon emission number start with getting the “materials” out of the ground? Or does it start with them being produced from raw materials. That difference in time can change the numbers considerably. People tend to cherry pick numbers for the desired result when it comes to things like this. The only factual way of comparing the two is to go from “getting it out of the ground” to recycled.

Up til now, local production (short lead times and best possible quality management) has only been possible with alu. Alu also leds itself to an almost automated production process, in contrast to carbon which is mainly laid up and processed by hand. Some brands are experimenting with new ways of small scale local carbon production, so I think we’ll see small scale alu brands move to carbon as this tech becomes more main stream. However, I love what Pole is doing with alu, so no need to change!

I think the billet aluminum approach is pretty cool. I’m a small scale manufacturer in another field and I do almost everything out of billet. And a billet bike sounds super cool. I would like to know what the exact weight penalty is vs carbon though. Mostly out of curiosity. If they have a well sorted FEA program they can probably knock a ton of weight out of the aluminum frame. It could be “paper this” in spots.