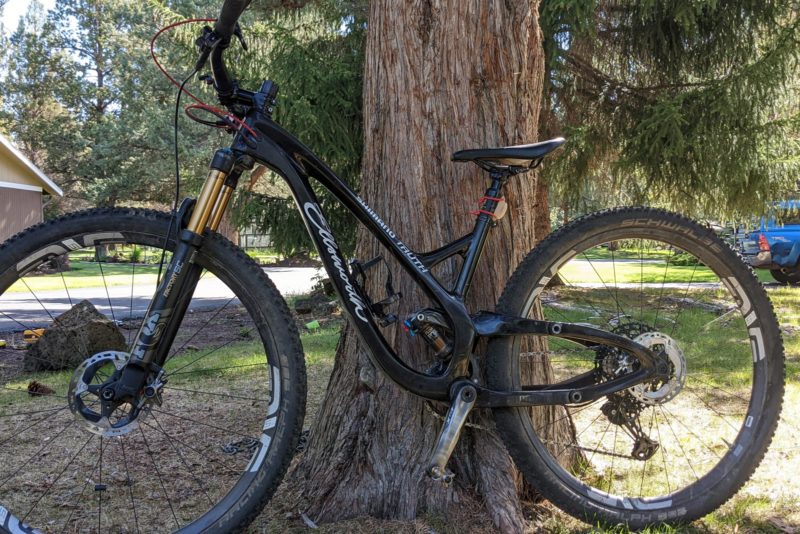 Fresh off the back of her Solo Win at the WEMBO 24 Hr MTB World Championships in Finale Ligure, Italy, we caught up with Chelsey Magness to check out the bike that took her to the top step, and to learn how she managed herself and her equipment throughout. Over a 24 hour period, Chelsey rode 24 laps of an 11.7 km course with 370m of elevation gain; that totals 281 km and 8880 meters of climbing overall. Yes, that’s just over one Everest.

Here, we take a closer look at the 2022 Ellsworth Truth XC Bike she completed that monster effort on, a bike that Chelsey describes as a bit of a “unicorn” at the moment, as it is the only one in the world that is being ridden right now. 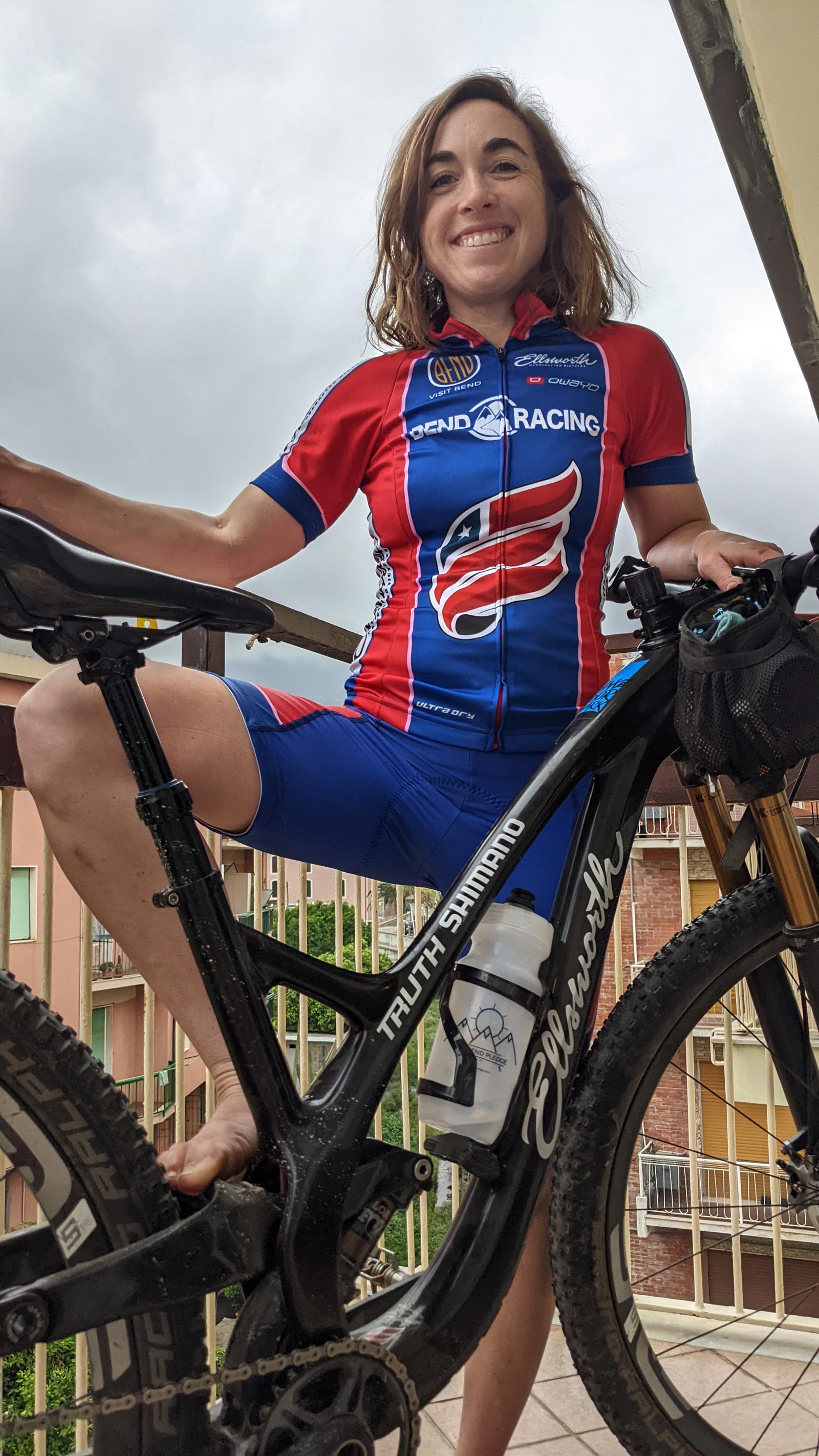 The 2022 Ellsworth Truth is a 120mm travel full suspension carbon XC bike rolling on a 29″ wheelset. It is not yet available to the public, but we are told it will be before 2022 is out. Complete bikes will be available with 100mm travel front and rear, or with 120mm travel front and rear; Chelsey opted to run the longer travel configuration with a Fox Factory 34 Step Cast fork for the extra forgiveness it would provide when she eventually got tired. 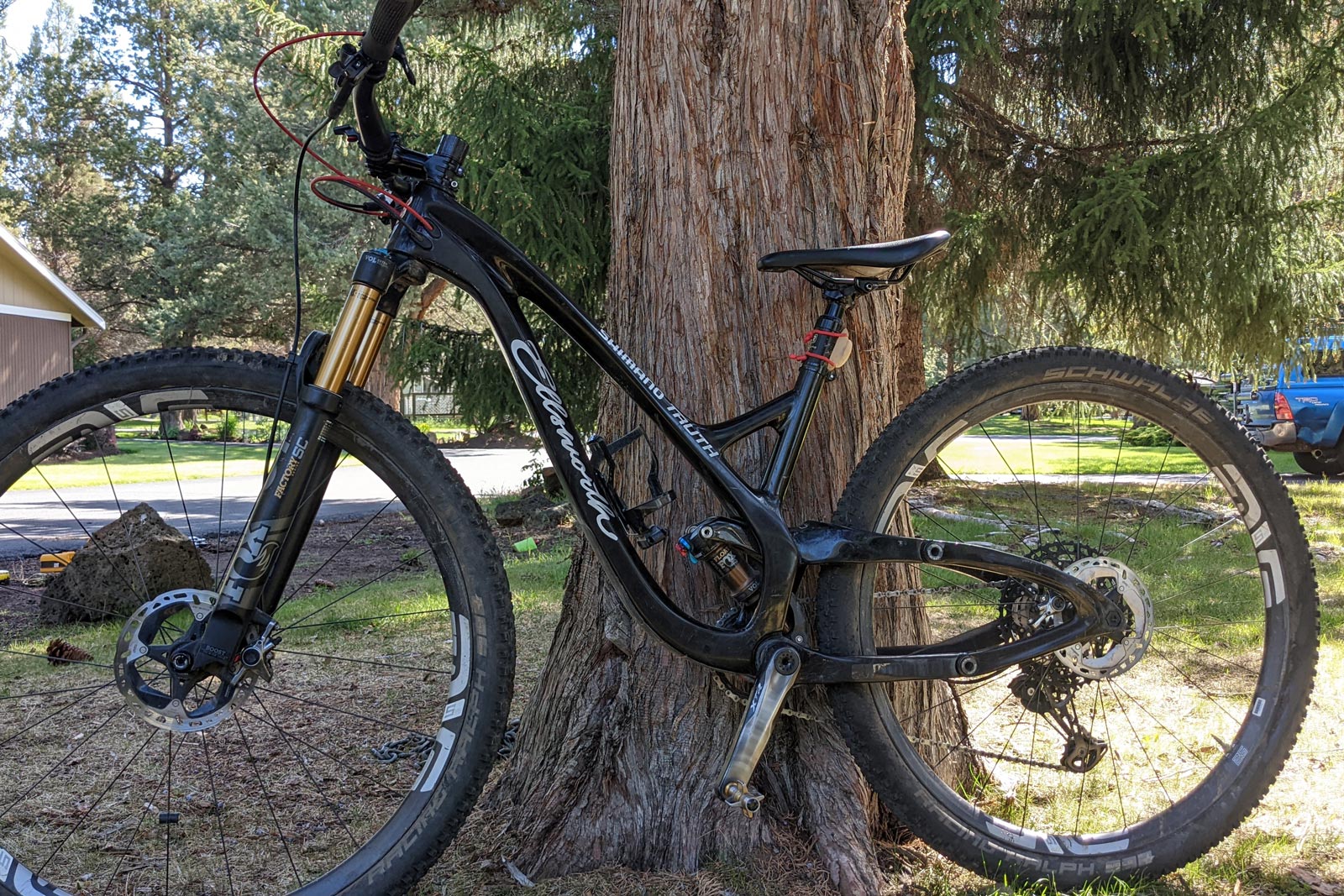 A non-drive side view of the Ellsworth Truth gives a better view of its patented Fully Active Energy Efficient Suspension platform designed by Tony Ellsworth; a more in-depth look at the bike, its geometry and suspension platform will follow in a separate article.

Designer Tony Ellsworth tells us this particular linkage results in no pedal power loss through squat or anti-squat forces, which is why Chelsey is able to maintain such a high speed over that 24 hour period. He goes on to say that the suspension design “gives her traction and control with less effort, and the efficiency puts her meters ahead with the same energy output as compared to a less efficient design”.

Chelsey backs that up, stating it is the best bike she has ever climbed and descended on. A raving review, but no amount of words are more convincing than the fact that, at 12 hours into the race, Chelsey began to pull away from the rest of field, putting an average 8 minute per lap lead on competitor, Gaia Ravaioli. 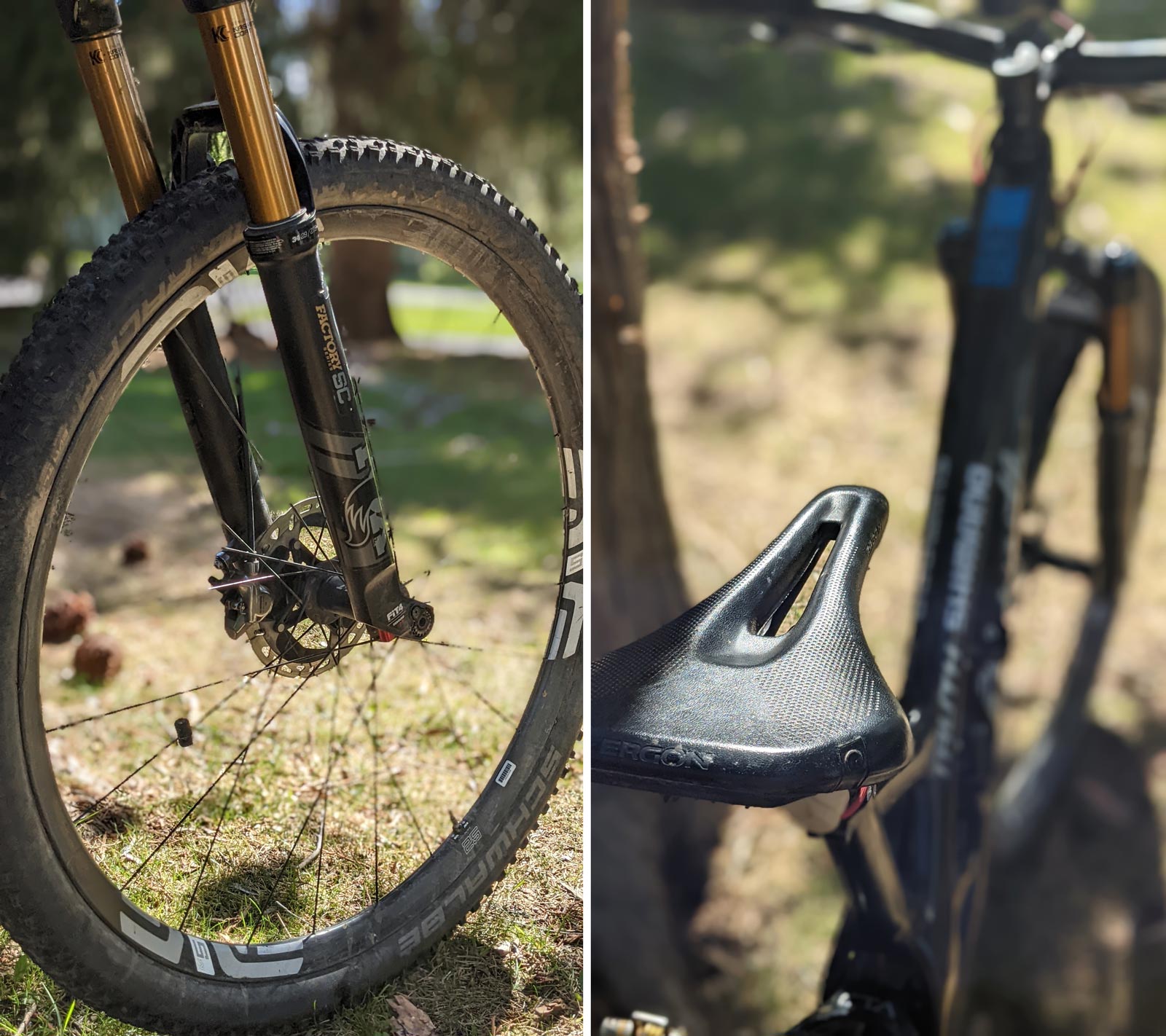 Paired with that full carbon Ellsworth Truth frame are 29″ Enve M6 carbon wheels with an Industry Nine hubset. The 30mm internal width rims are home to Schwalbe Racing Ralph Snakeskin tires, set up tubeless at 20 PSI, with no use of tire inserts. The main considerations here were weight, rolling resistance, multi-condition grip and marathon puncture resistance. Orange Seal was the sealant of choice. 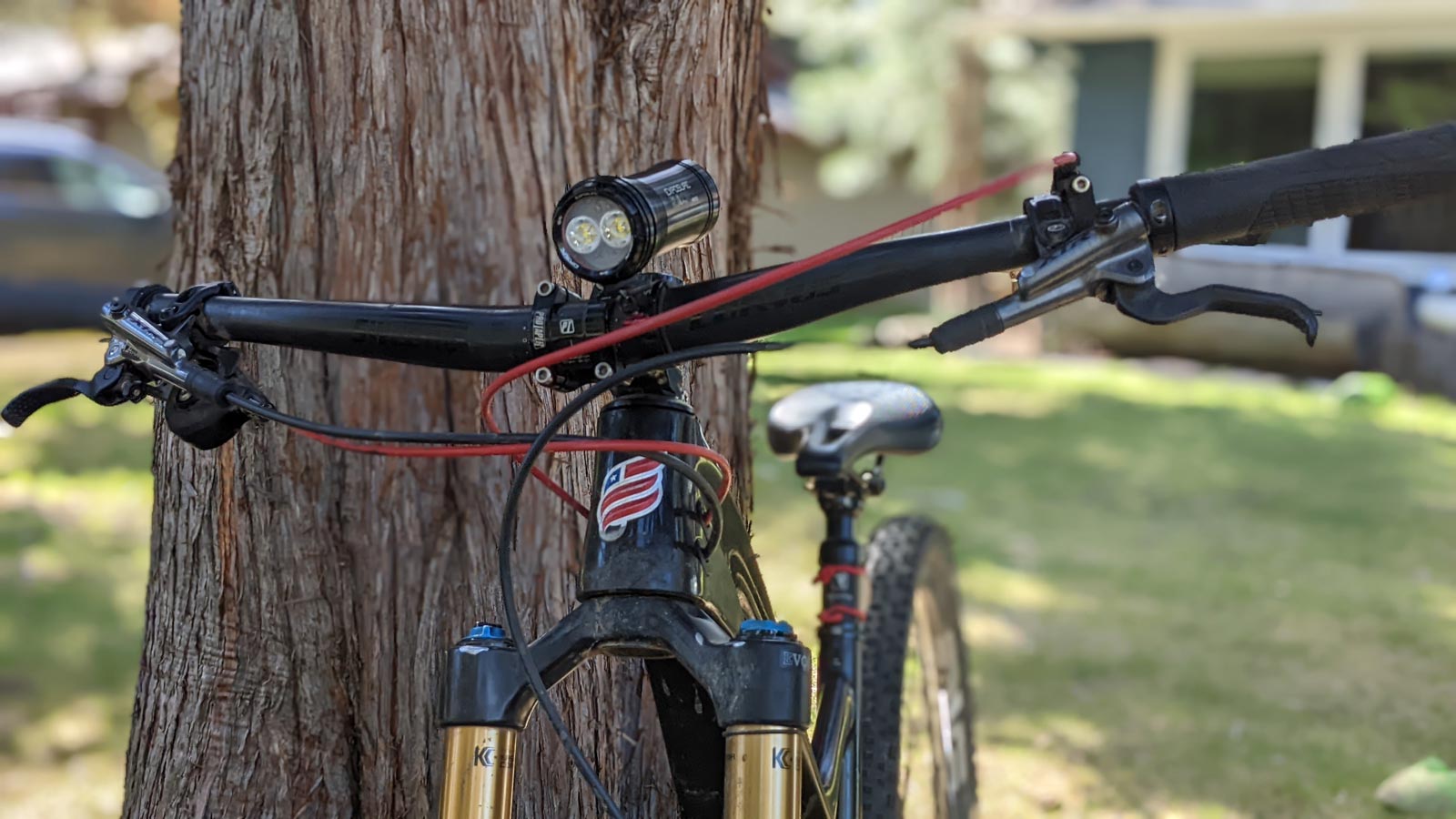 For riding through the night, Chelsey chose to rely on an Exposure Toro MK15 Handlebar-mounted light and an Exposure Joystick helmet-mounted light. Both lasted for the full 10 hours she needed them on one complete charge. 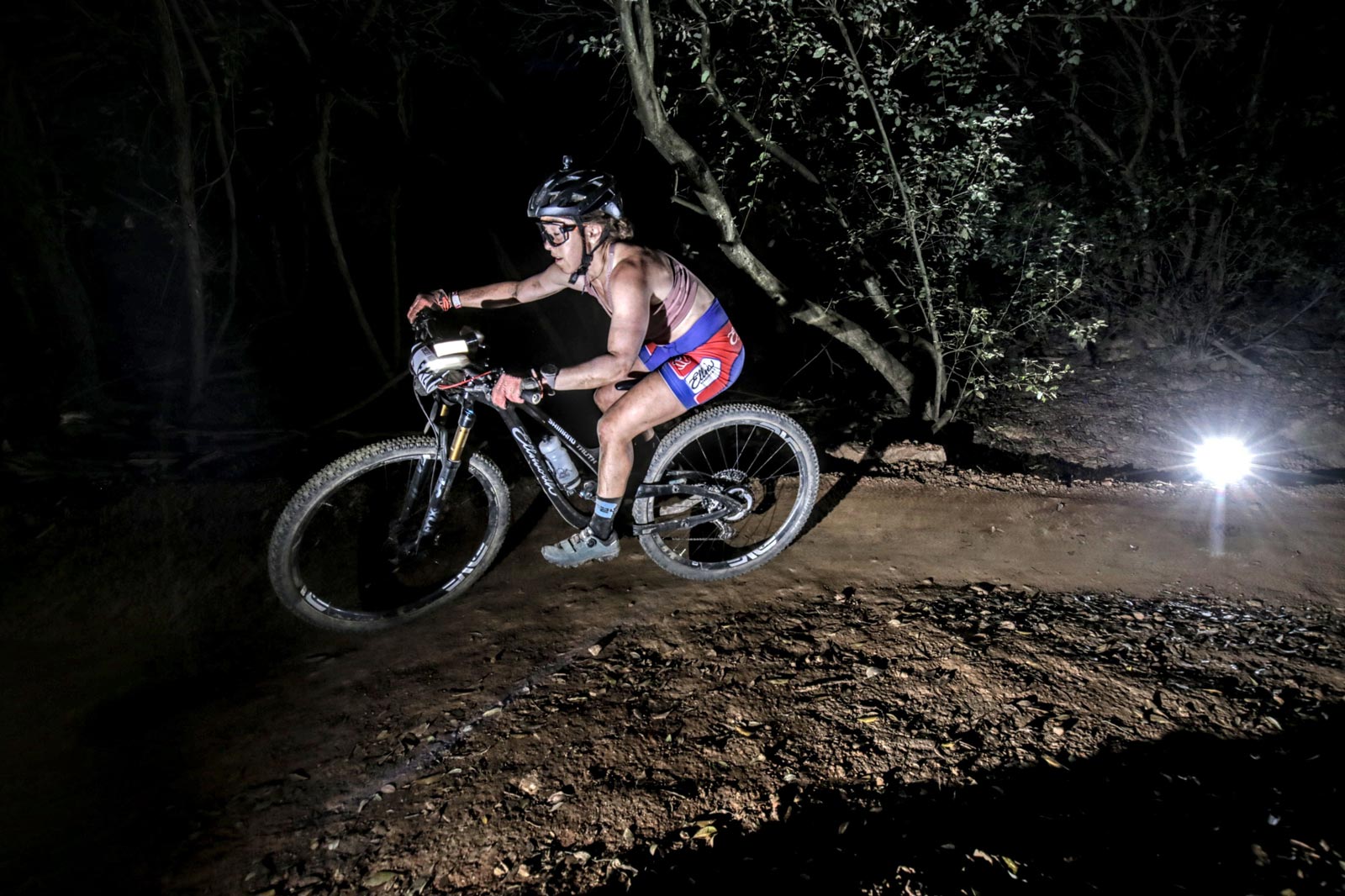 Chelsey wore Smith Bobcat Sunglasses for the whole race, and only changed the lens when the sun went down

In the cockpit, Chelsey runs a Corvus Sweet 16 carbon handlebar cut to 720mm, clamped by a 60mm reach stem. The bar has a 16° backsweep which Chelsey says helps the shoulders, elbows and wrists stay at a sustainable angle for long rides. Shimano XTR 2-Piston brakes take care of speed management, with a 160mm center-lock rotor on the front and rear. Ergon GP2 grips finish off the cockpit.

Chelsey’s Gear, Fuel and Hydration for her 24 HR Solo Effort 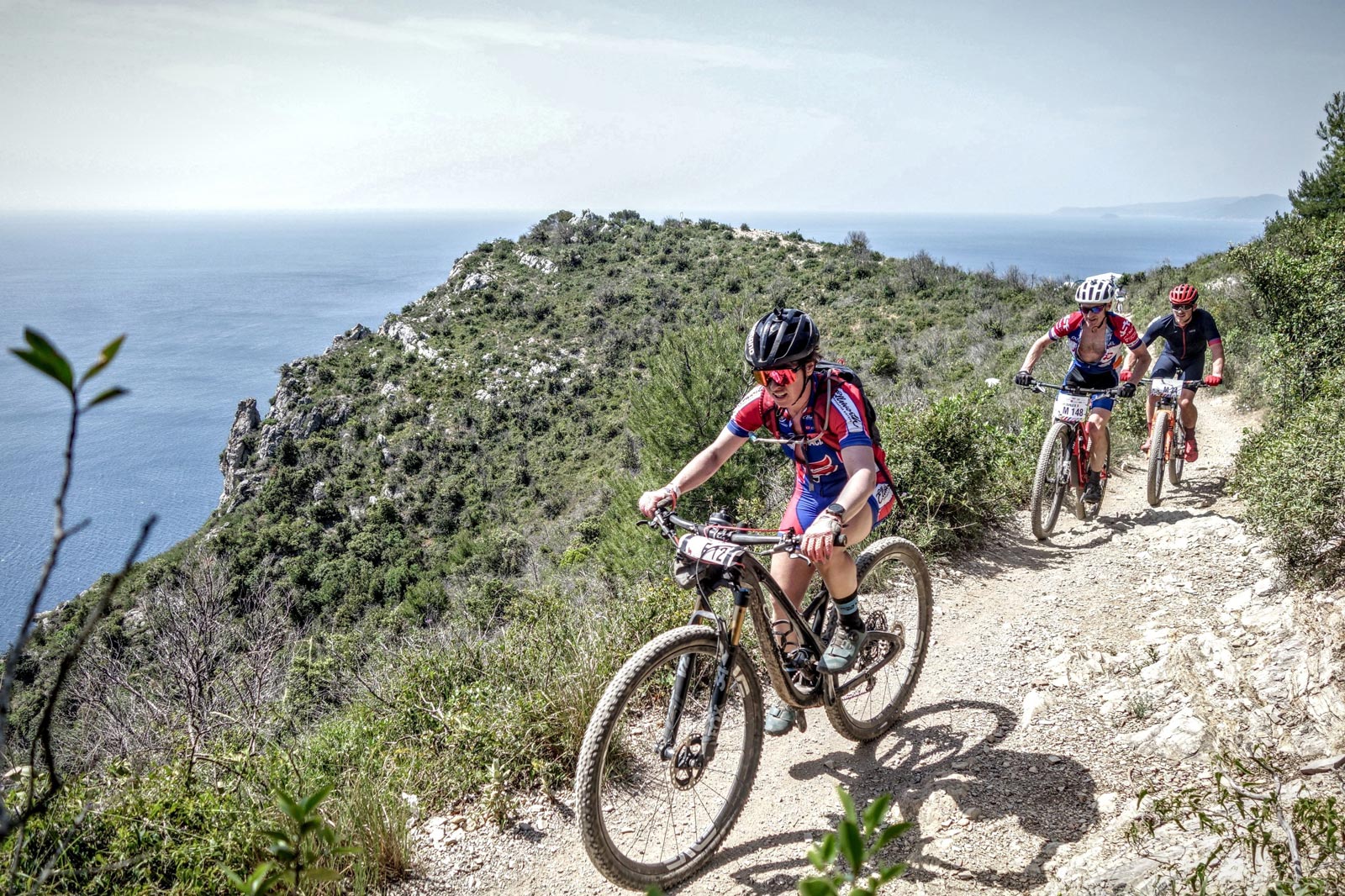 Chelsey chose the Pearl Izumi X Alp Summit Shoes for the WEMBO event in case she needed to hike-a-bike through any sections. She says that, while they aren’t the lightest option out there, they are extremely comfortable and have great grip.

“For the lemans start, which was 500 meters, it was like running in my running shoes” – Chelsey Magness.

She paired the Pearl Izumi shoes with Crank Brothers 11 clipless pedals with the classic Eggbeater mechanism that offers four-sided entry.

Over any 24 hour period of riding, managing your hydration levels are of utmost importance, particularly when the mercury is hitting 100° F (~28°C) as it did in Finale Ligure that day (60% humidity, too). During the day time, Chelsey carried a 2 Liter insulated HydraPak, filled to just 1 liter. Partner Jason was filling it with ice cold water, and it remained cold over two whole laps! A frame mounted bottle was used during the night. Over the whole race, Chelsey consumed a total of 17 liters of fluid. 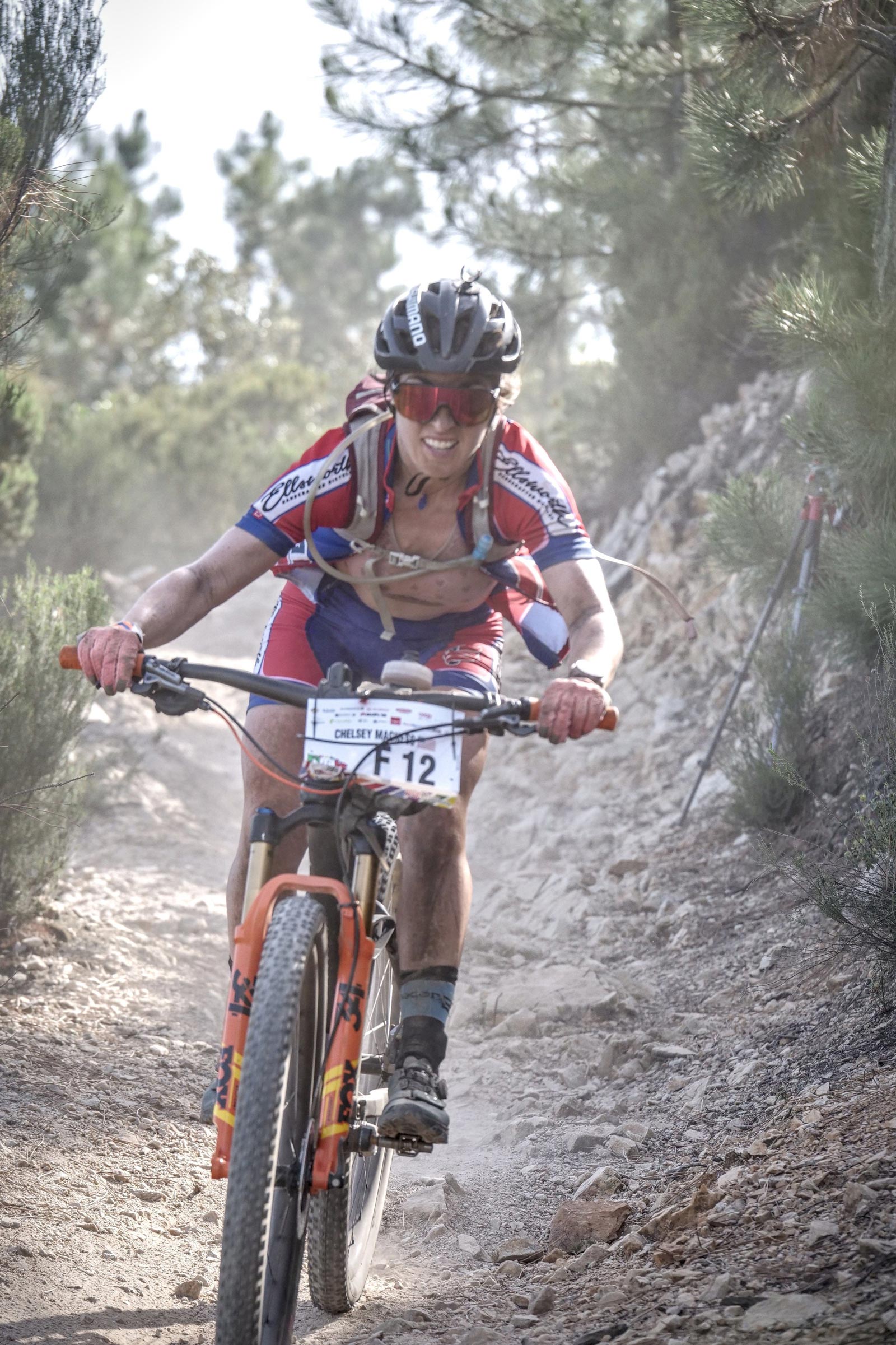 Chelsey rode 23 of her 24 laps aboard the new Ellsworth Truth, but a mechanical issue forced her to ride the Ellsworth Epiphany – it took just one lap to fix a sticky gear cable on the Truth.

It wasn’t just plain water that Chelsey was drinking. She says she took 75% of her calories from Four Hour Fuel (5 bags worth), a blend of BCAAs (branched chain amino acids), protein, sugar, mild organic flavoring and salt. Up to 800 calories worth can be dissolved in one bottle. We should mention here that Chelsey is a part owner of Four Hour Fuel, a company founded by her husband, Jason.

For the rest of her calories, Chelsey relied on no fewer than 12 gels from sponsors, Spring Energy. These are made out of whole foods; Cranberrys, Apples, Basmati Rice, Coconut Oil, can all be found on the ingredients list. Chelsey says they go down great, feel good on the tongue (no tongue sores!) and are easy on the stomach. She also put away 3 micro pancake wrapped bananas, 5 bites of pasta, 2 bites of fresh Focacia bread, 10 gummy bears, 2 sips of coke, 1 cup of Lairds Superfood instafuel, and a caffeine gum. 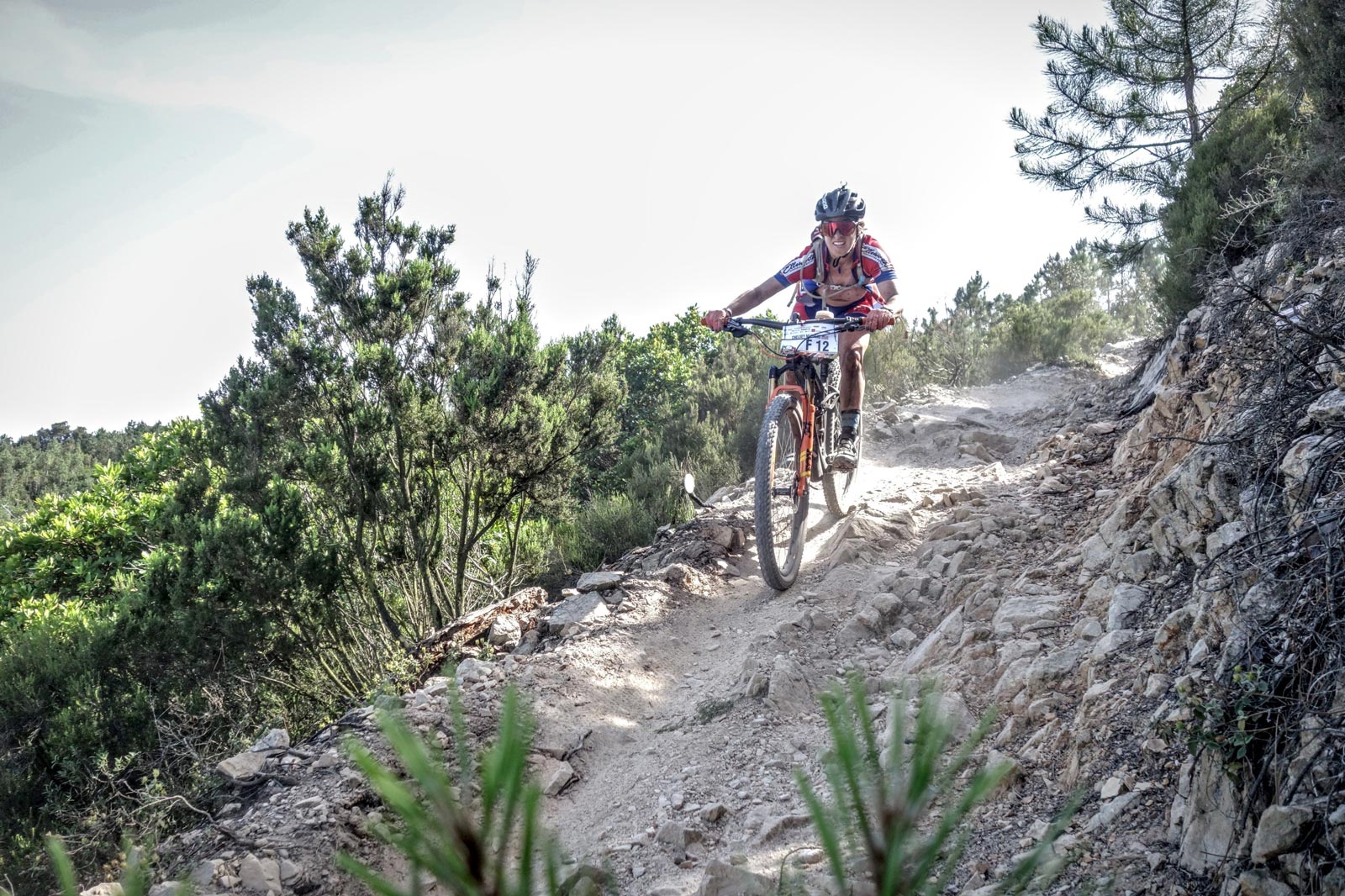 Chelsey carried Dynaplugs and one CO2 cartridge in her feed bag, and used the specialized ZEE Cage II to store a water bottle.

She carried those gels inside a Feed Bag from Rogue Panda, a product that the brand has now discontinued. A similar product can be found in Revelate Designs’ Mountain Feedbag.

Chelsey took great care to manage herself well over the 24 HR solo effort. She tells us she applied fresh chamois cream from Joshua Tree every 3-4 laps, Mission Farms CBD Cream on my neck and lower back every 4th lap, and also regularly applied Sunscreen from Joshua tree. 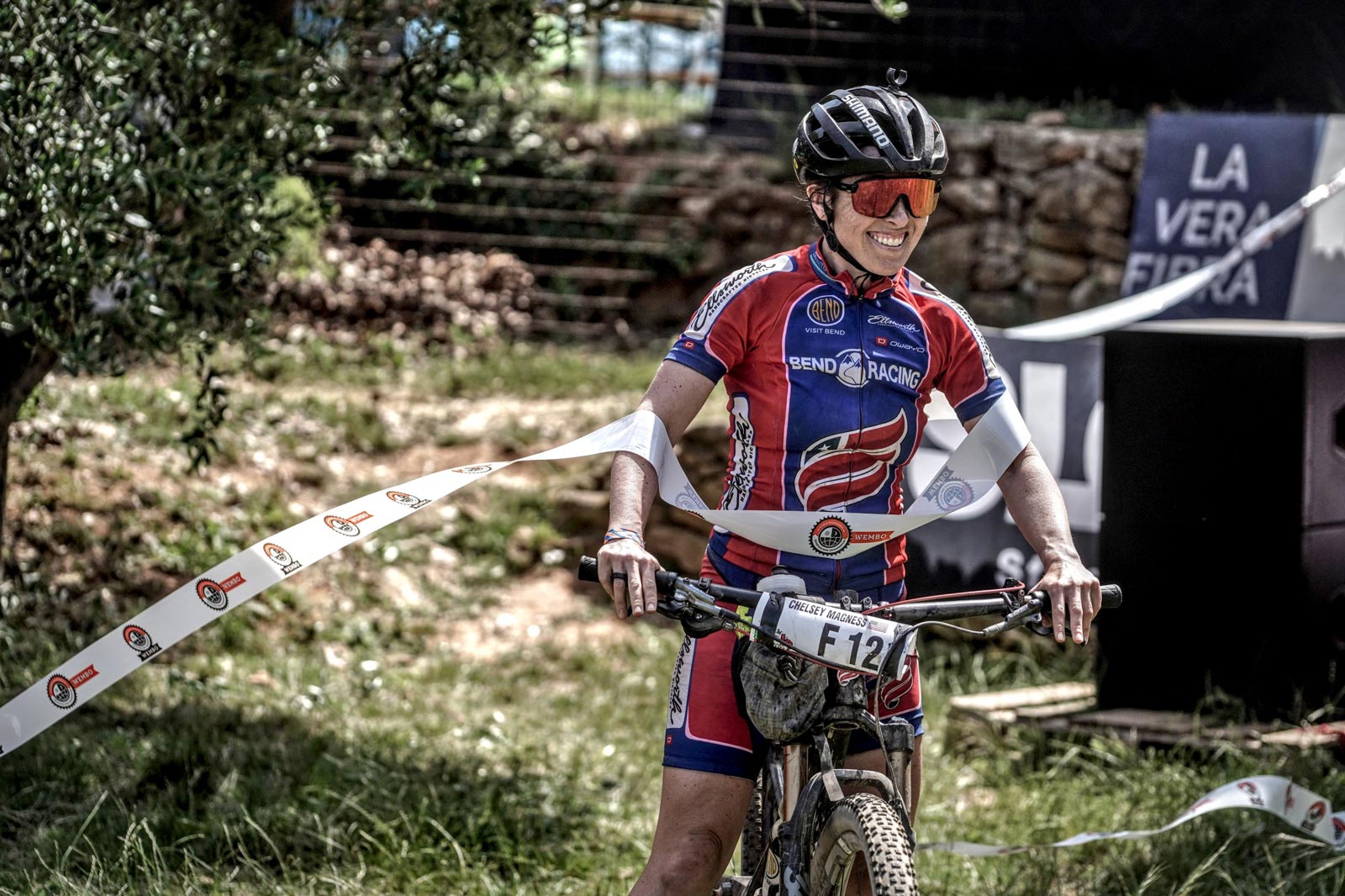 Chesley tells us she is looking forward to testing herself once more at the 2023 WEMBO 24 Hr MTB World Championships in Armidale, NSW, Australia.

“Huge thanks Russ Baker (WEMBO World 24H MTB Championship) for the invitation and encouragement to come, to 24 hours of Finale Ligure for an amazing, exciting and welcoming race, to Jason Magness for the 24 hour support, to Will Loevner’s family for helping Jason out when he needed extra hands and to Francesco and Valeria for taking such amazing care of our boys! I am excited to test myself again in Australia next year” – Chelsey Magness.

While I’m not always a fan of the bike geometry, the pedaling performance of the Ellsworth is always near the very top of the bunch. Brilliant article Jess!

How do you know?

Had the original Ellsworth Epiphany and it is hands down the best pedalling full suss bike have ever ridden. A pleasure to climb on at all times, most all-round exquisitely fine handling bike I’ve owned too. Would have another Ellsworth, no question.

So your comment motivated me to look up the anti-squat and leverage curves of a bunch of Ellsworth bikes. Holy hell! They’re designed to sacrifice pedalling efficiency in favour of suspension responsiveness, but anti-squat that goes negative halfway through the suspension travel…

Outside!
Reply to  Mallory

I still have an original Epiphany and ride it occasionally. It still rides pretty good, but my Ibis Ripmo V2 peddles better.

Those peeps are crazy lol! 24 hours racing, geepers..
Cool looking bike. I know Ellsworth gets a lot of grief frankly l don’t know why. From what l hear their bikes preform amazingly. I remember that their alloy frames had really cool artsy, wavey anodizing. Im sure this bike will be a rocket!