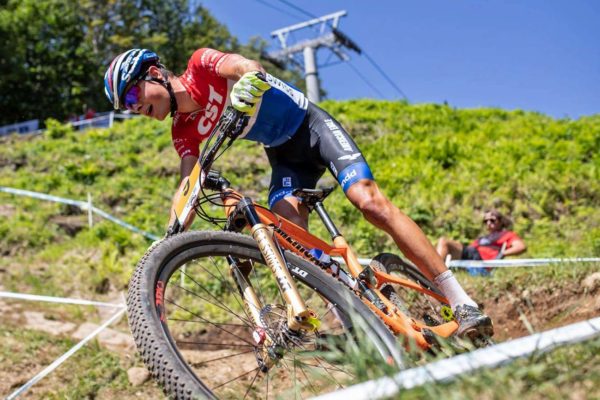 The fact that Dutch bike maker American Eagle are working on a carbon full-suspension XC mountain bike to outfit their pro race team is no surprise. When they debuted the brand with the Atlanta hardtail, there was already talk of a full-suspension bike. But now it seems that new XC racer is just around the corner… 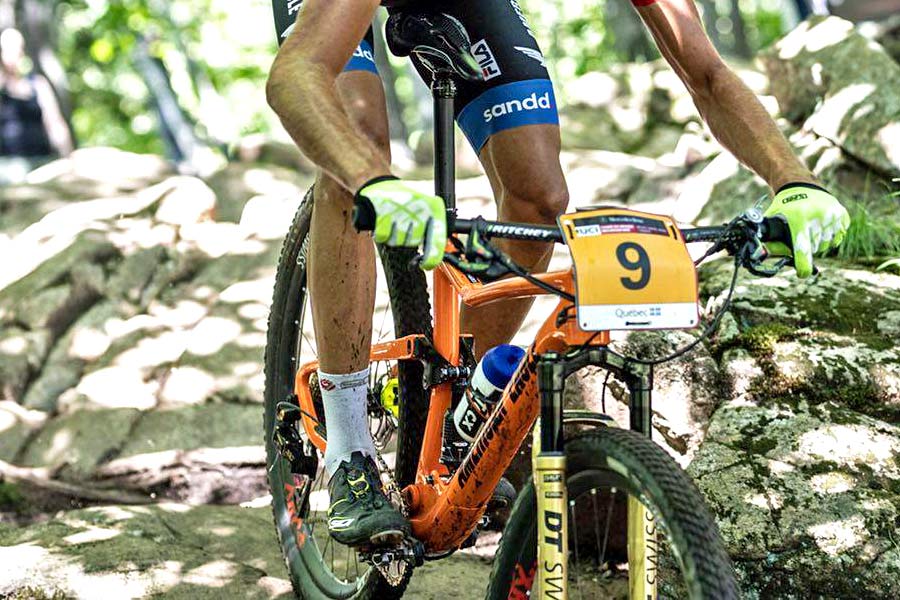 While the Brentjens MTB Racing Team were still competing on their Atlanta carbon hardtails when we caught up with them in the middle of last season, by the time the last World Cups & World Championships rolled around several riders could be spotted on the new bikes. Originally rumored to make it to market in late 2018, the bikes were clearly ready for the team in that timeframe, just not for the rest of us. 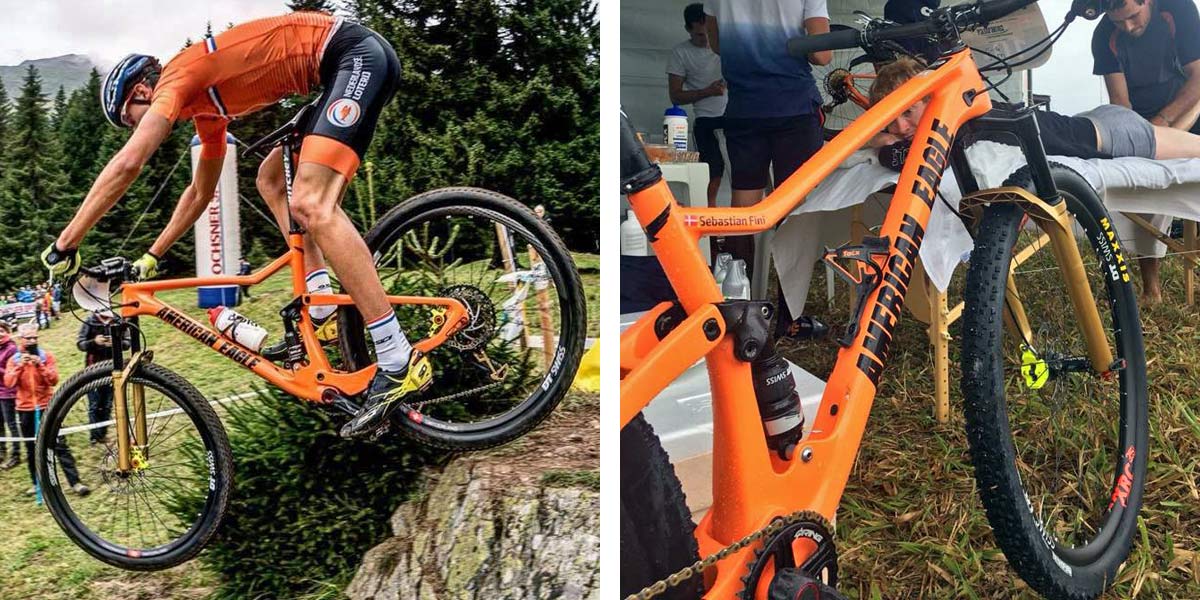 American Eagle isn’t exactly hiding the new bike. They are all painted in bright team orange, and you can find photos of it on just about every social media page of their riders – even on the Brentjens Team pages. Details of course remain thin since the bike hasn’t been officially released, but we can garner a lot of details from looking at the race-ready pre-production bikes…

Many might notice a strikingly similar profile to the Scott Spark (especially since that bike also has a similar orange team edition paint job.) The as yet unnamed American Eagle bike does share a similar single pivot suspension design, relying on frame flex in the carbon seatstays, and a short linkage driven inverted shock.

These prototypes do depart with a few key differences… 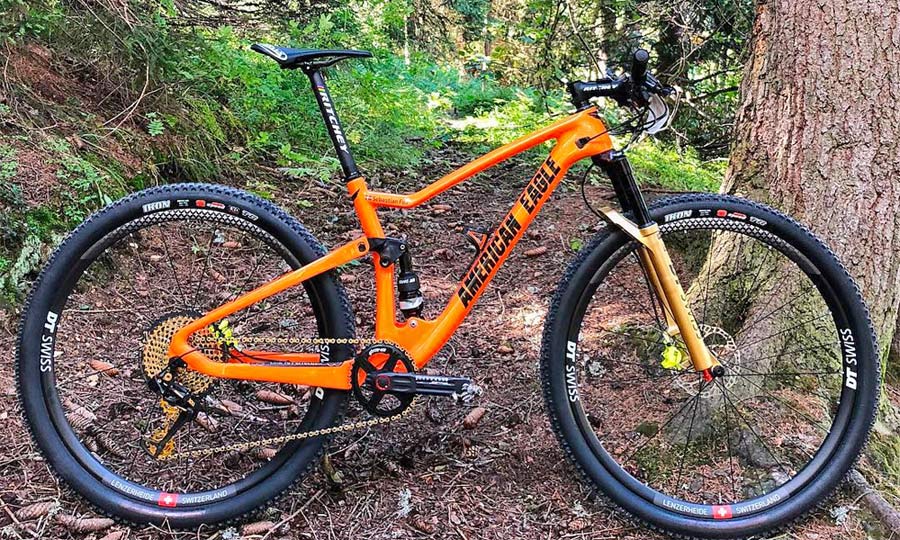 The American Eagle features a loop back rear end, and seatstays that grow boxy & deeper as the appraoch the rocker link. The rear rocker pivot on the stays is also eccentric, possibly offering the ability to modify geometry/suspension curves with a flip chip.

The American Eagle frames do include internal routing for their 1x drivetrain, rear brake, a hidden remote lockout for the rear shock, a dropper seatpost in some builds, and what appears to still be a cable exit port for a Sideswing front derailleur. The bikes all get DT RWS thru-axles to go with DT Swiss suspension, and use a post mount rear brake inside the rear triangle.

No concrete date has been set for the new bike reveal (we expect it very soon, now that the team websites are down for an overhaul.) But American Eagle has said that they are now targeting March 2019 availability for the new bike.

This frame appears to be another product of the Chinese open mold or “generic” factories. There are several manufacturers who are selling a frame that is practically identical to this, including HongFu and ProMance. There are strong similarities to World Cup XC racer Gerhard Kerschbaumer’s “Torpado” if you look closely.
The cable routing from the head tube appears to be slightly different from what consumers can buy directly from the factories, but the suspension rocker link is the same.

From what I’ve gathered, companies will buy rights to an open mold frame, but make small cosmetic adjustments in order to call it their own. My guess is that Bretjens’s team needed a frame that could manage the rougher World Cup courses. I’d hate to ride Nove Mesto or Mont Sainte-Anne on a 71-degree HTA hardtail.

The basic layout is the same as a Hong Fu, but that’s it. Angular vs round tubes, dropout position, among other things. It’s not like they can just move bits inside the mold. It takes a completely different mold. When it comes to short travel XC, there’s only so many ways you can lay things out efficiently. Of course there’s going to be convergence of design.

No, if you look clearly, the one in your link is a “Trial” frame as opposed to a “Trail” frame.

Looks tooo similar to the Spark to be coincidence. I guess the Spark is also Open mould. The last one was

you guys are dumb with the scott “open mold” and here look at this Chinese frame so they obviously just ordered it from a catalog. spend five minutes looking and your obviously wrong because they are obviously not the same. Scott makes all kinds of things proprietary that most people wish they didn’t; so you think they would let the “whole frame” be open mold…? stupid. And then there are only so many ways to make a bike frame so there are obviously going to be similar looking bikes out there. hence, “it’s looks like a session”, comments for the last 10 years. (and lets be fair, the session “visually” copies any number of faux bar/walking beam/link designs that predated it)

This is an exact copy of the Chinese frame TRIFOX, the question is who copied from whom?