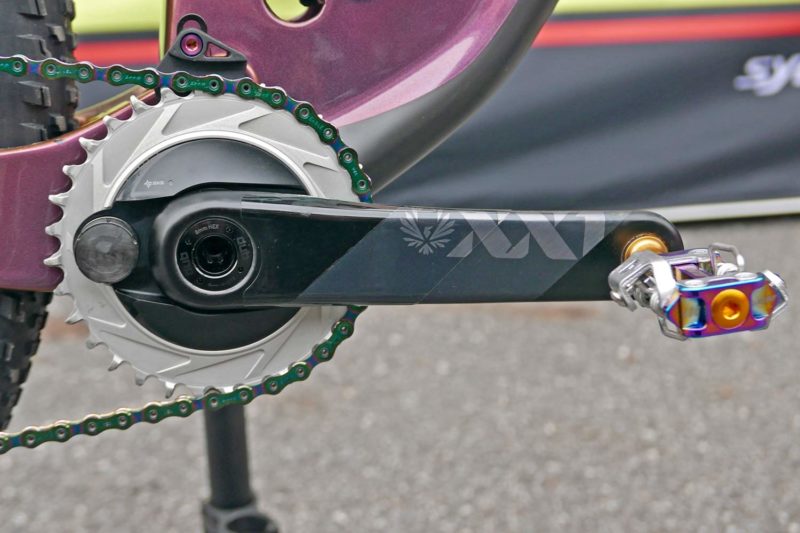 SRAM’s Blackbox XX1 AXS prototype integrated one-piece power meter chainring has been floating around on the race circuit for almost a year, so far. Although we’d only spotted it on the Scott bikes of Kate & Nino at the start of 2020, by the middle of the year Ghost was racing it on their prototype Lector FS, as were a few other champions. And now it’s started popping up on Specialized’s training camp bikes too… 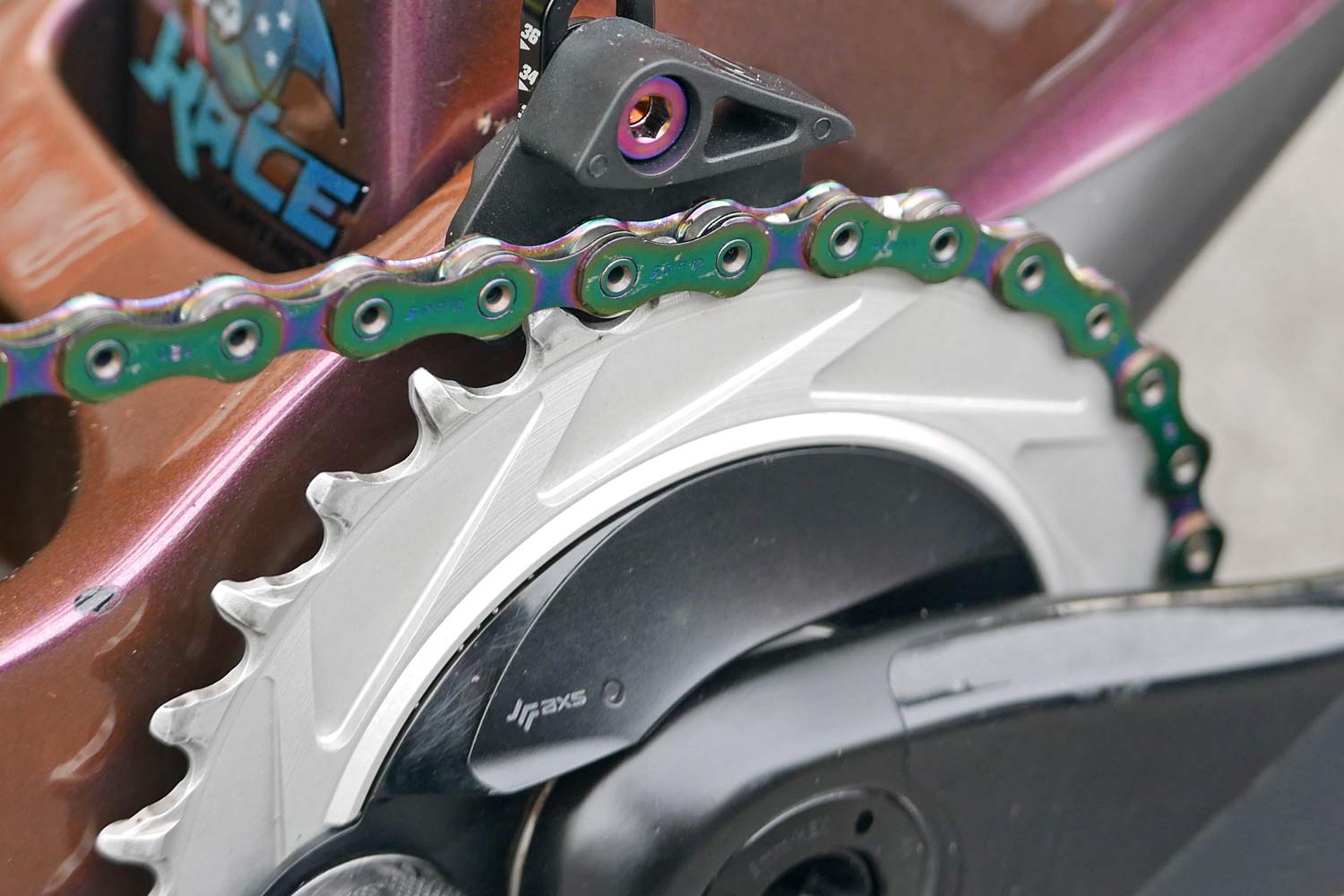 What we know of the new direct mount SRAM XX1 AXS power meter is that just like the Red AXS power meters debuted almost two years ago, these integrate the power meter electronics directly into the chaining. A lighter, stiffer, and easier to upgrade system… it also means that if you want to change gearing you will need to buy another power meter. And when you wear the teeth off your chainring, you are going to need to buy a new power meter.

Luckily, at least on that last front, SRAM has said that Red version chainrings last up to 50% longer than their previous generation. SRAM said previously that the silver look (at least of the teeth) is designed to keep the rings looking new longer vs. wearing off black anodizing. And when they do eventually wear out, the original owner can trade the worn ring in to be recycled & replaced with a 50% off discount buying a new replacement chainring power meter.

The integrated power rings – or what SRAM calls a SRAM AXS Power Meter Kit – currently sell for $820 / 800€ for either the 2x or 1x Red AXS configurations. So it’s a safe bet that’s what a SRAM XX1 AXS Power Meter kit will cost as well.

The rings use SRAM’s standard DM 8-bolt direct mount interface, and tuck all of the familiar  +/- 1.5% accuracy Quarq power meter sensors & tech inside the virtual spider. They communicate with Bluetooth LE & ANT+, syncing up with all other AXS tech, and are powered by a 200hr replaceable CR2032 battery behind that round Blackbox cover. 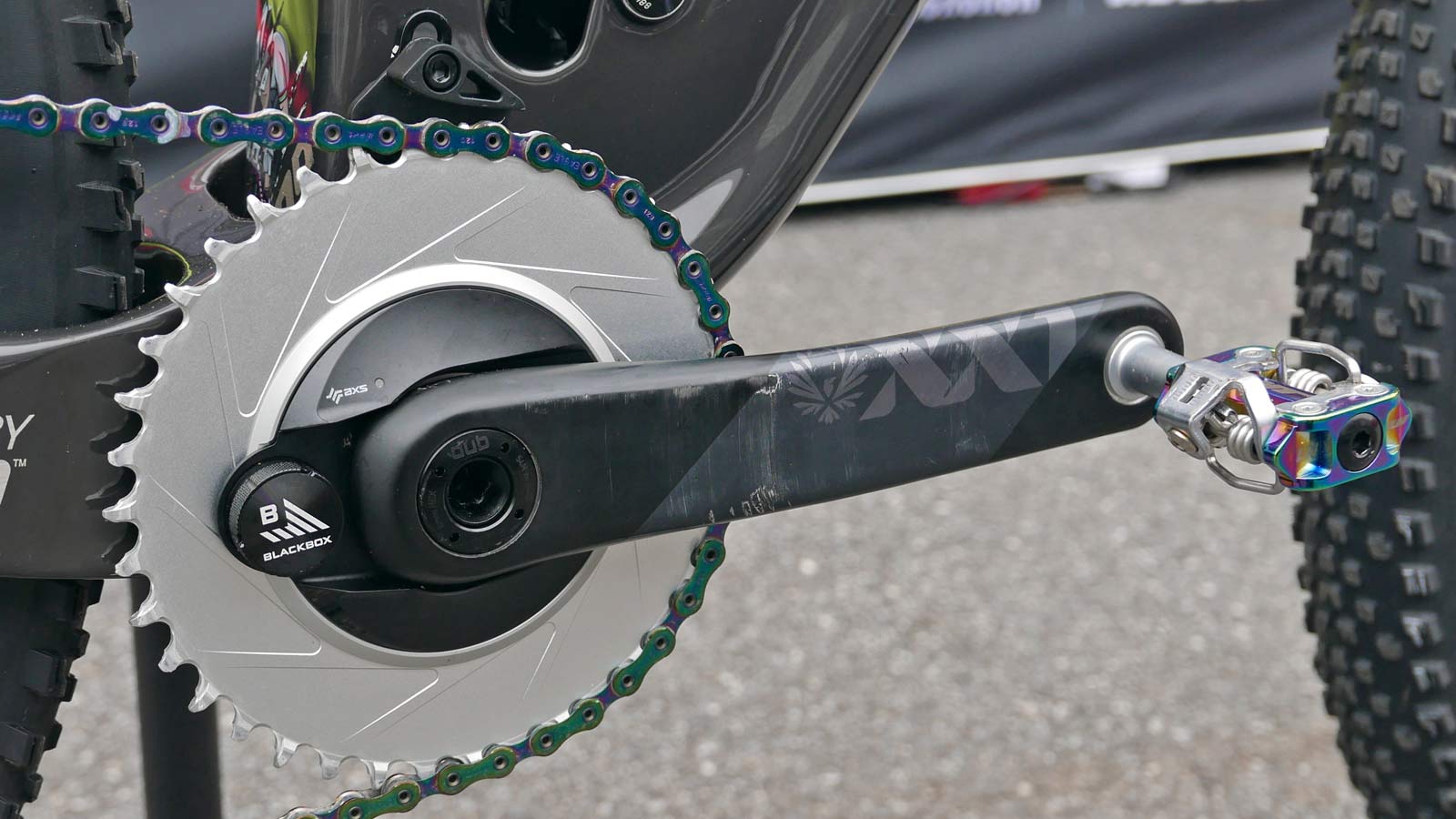 So far, we spotted most of the two-tooth increment range from Courtney’s 32T at the small end up to Schurter’s 38T at the top, with them only attached to current spec XX1 Eagle carbon crank arms. It’s possible that SRAM could offer them one step smaller or bigger, but as an XC race-focused component it’s not likely to go much beyond that for the time being.

No longer limited to one or two rider, let’s have a look at who’s been racing & training with the Blackbox prototype SRAM XX1 AXS power meter: 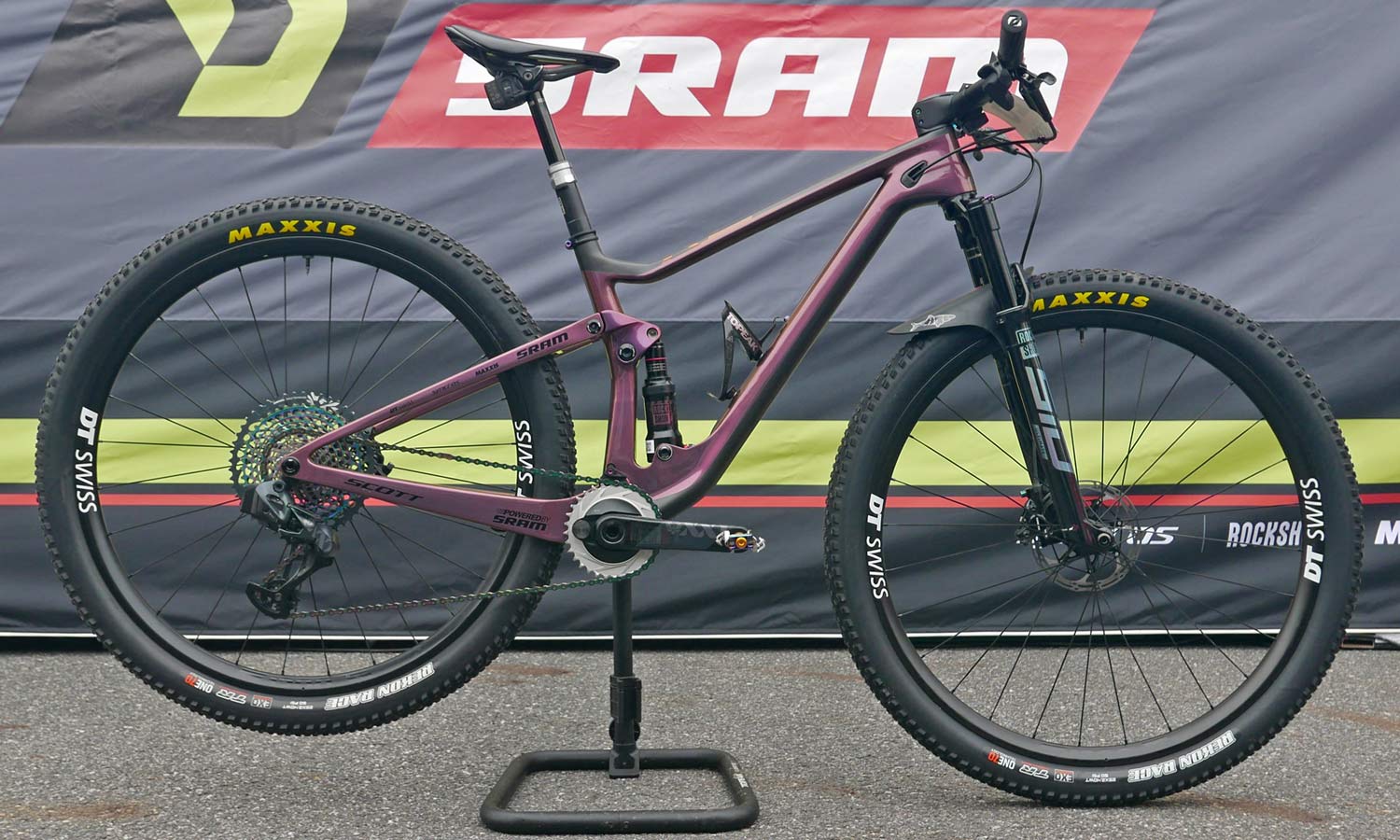 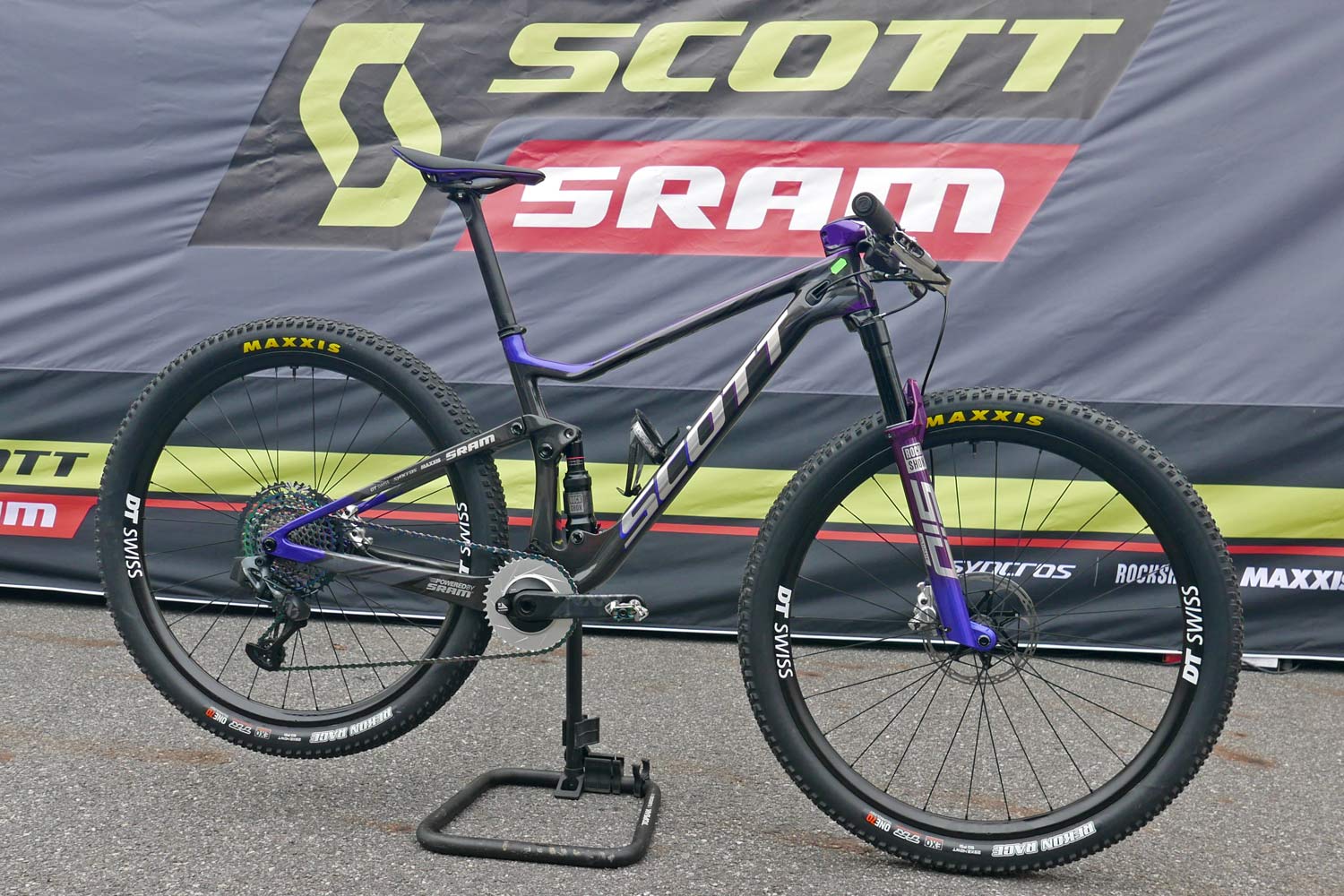 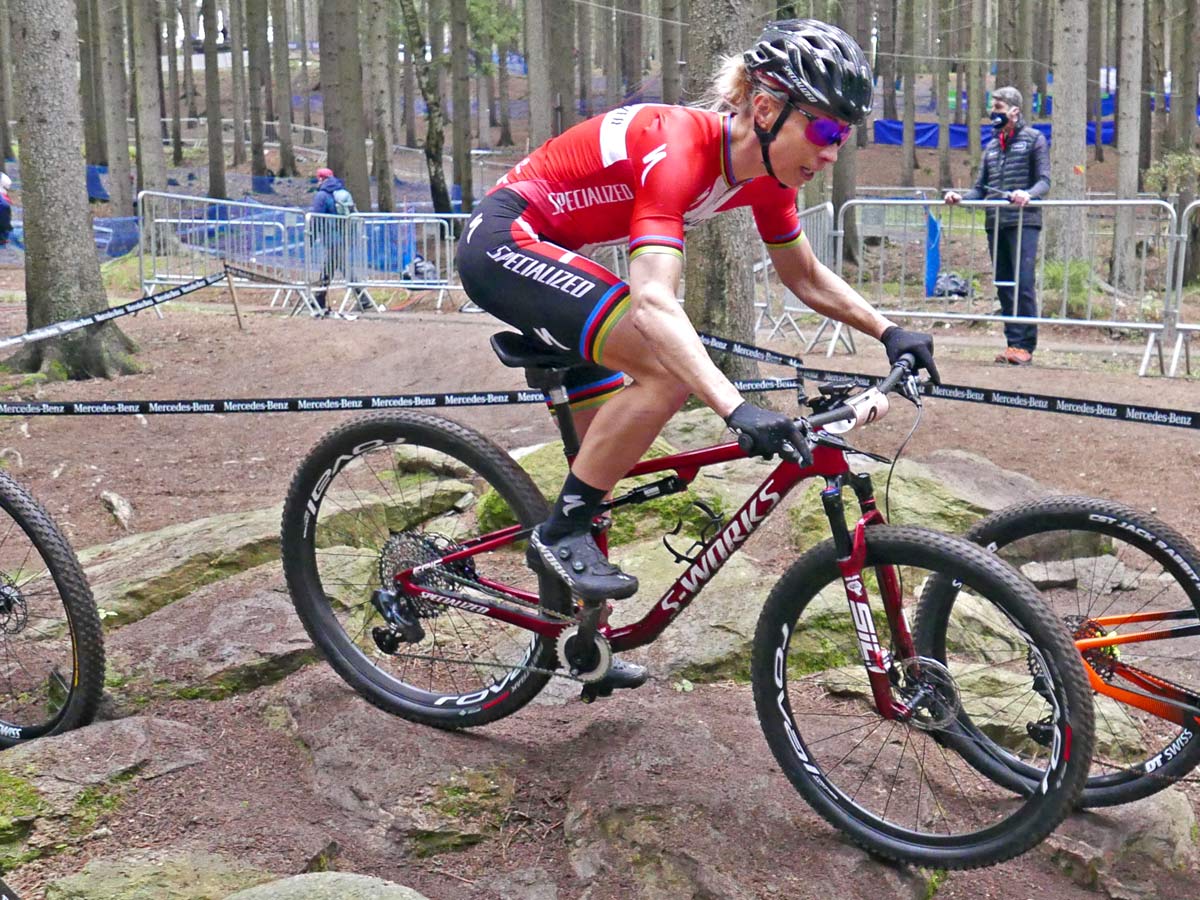 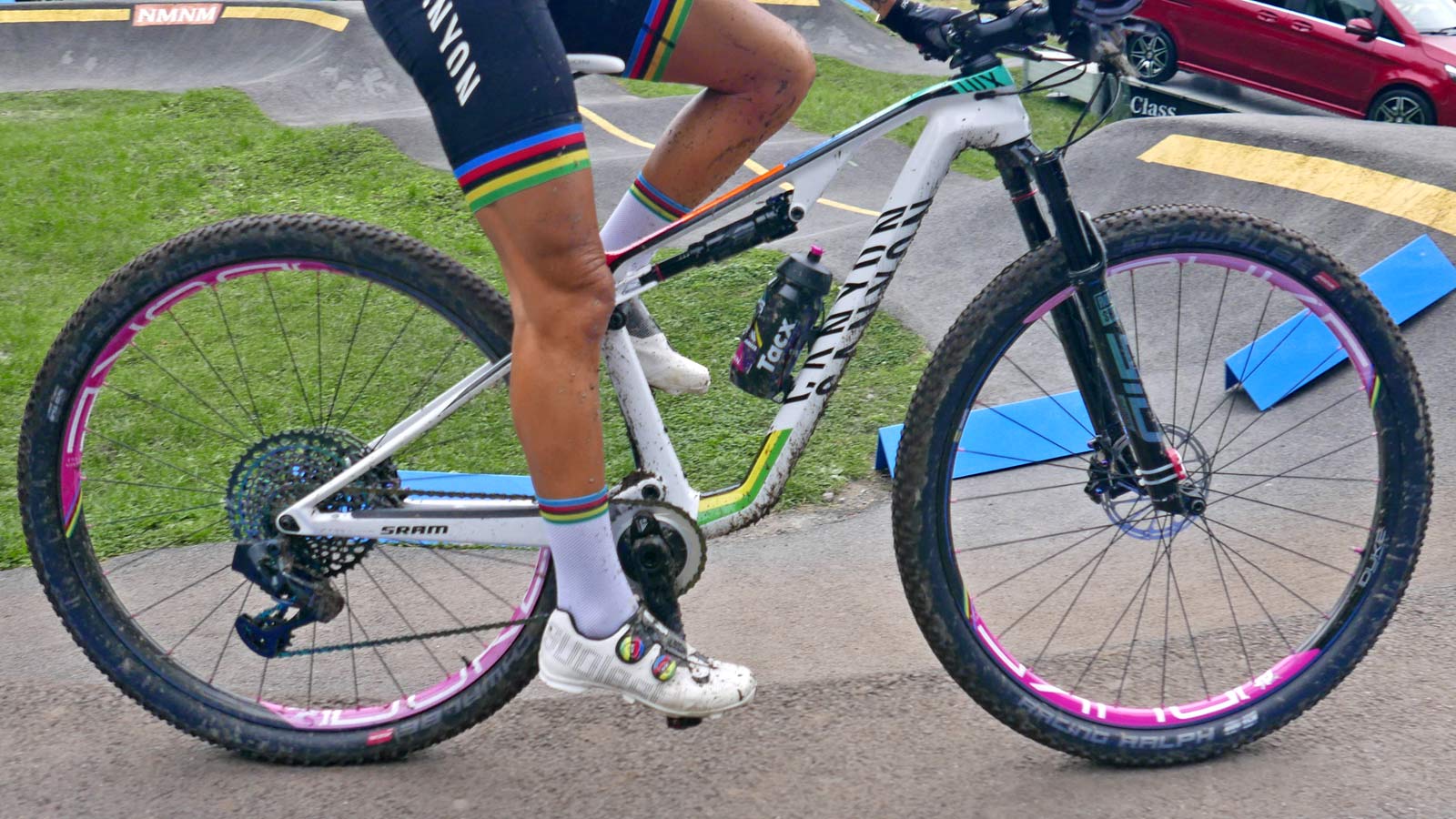 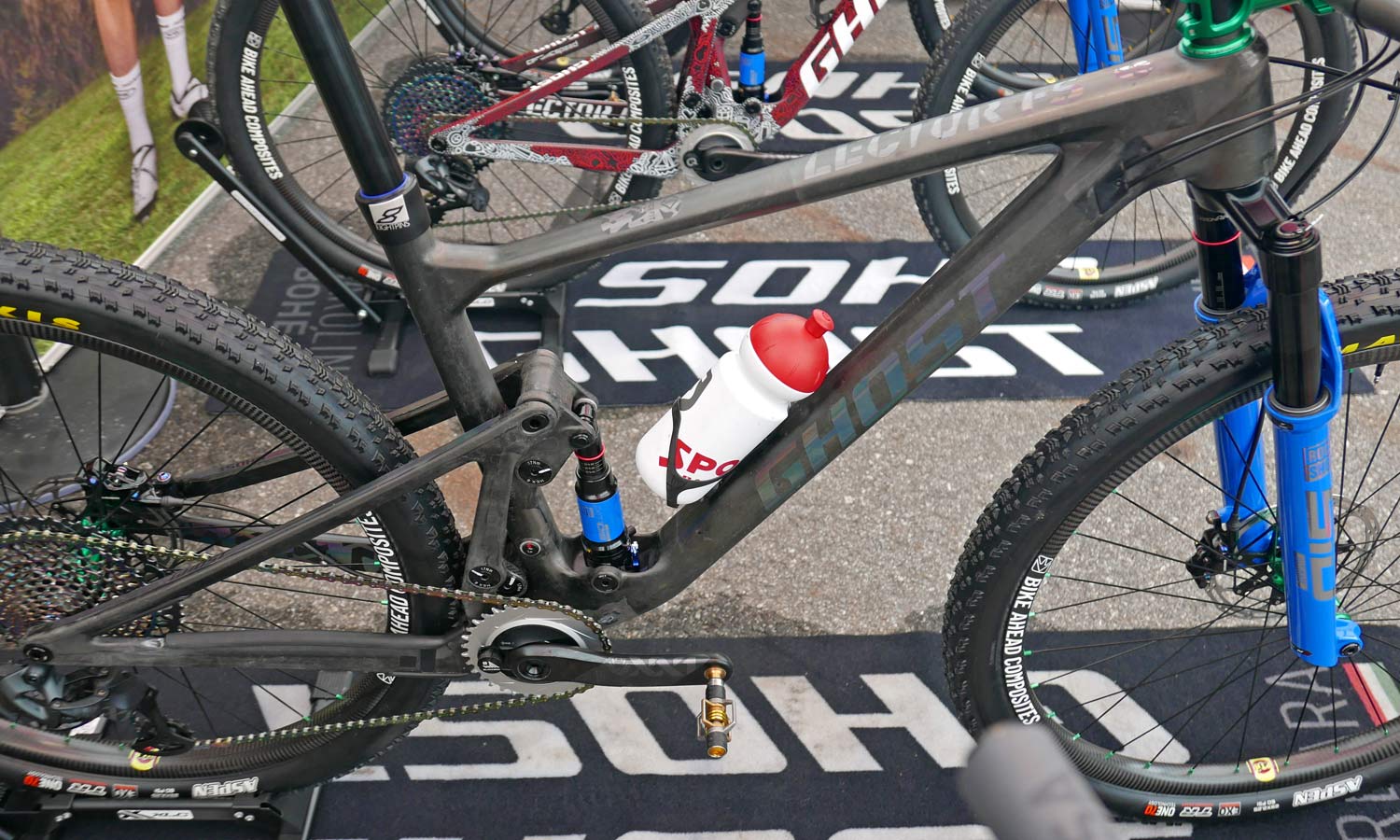 Barbara Benko’s stealthy raw unpainted prototype Ghost Lector FS. As well, as all of their teammates including former U23 World & European Champ Sina Frei who now has moved over to the Specialized Factory Racing Team of… 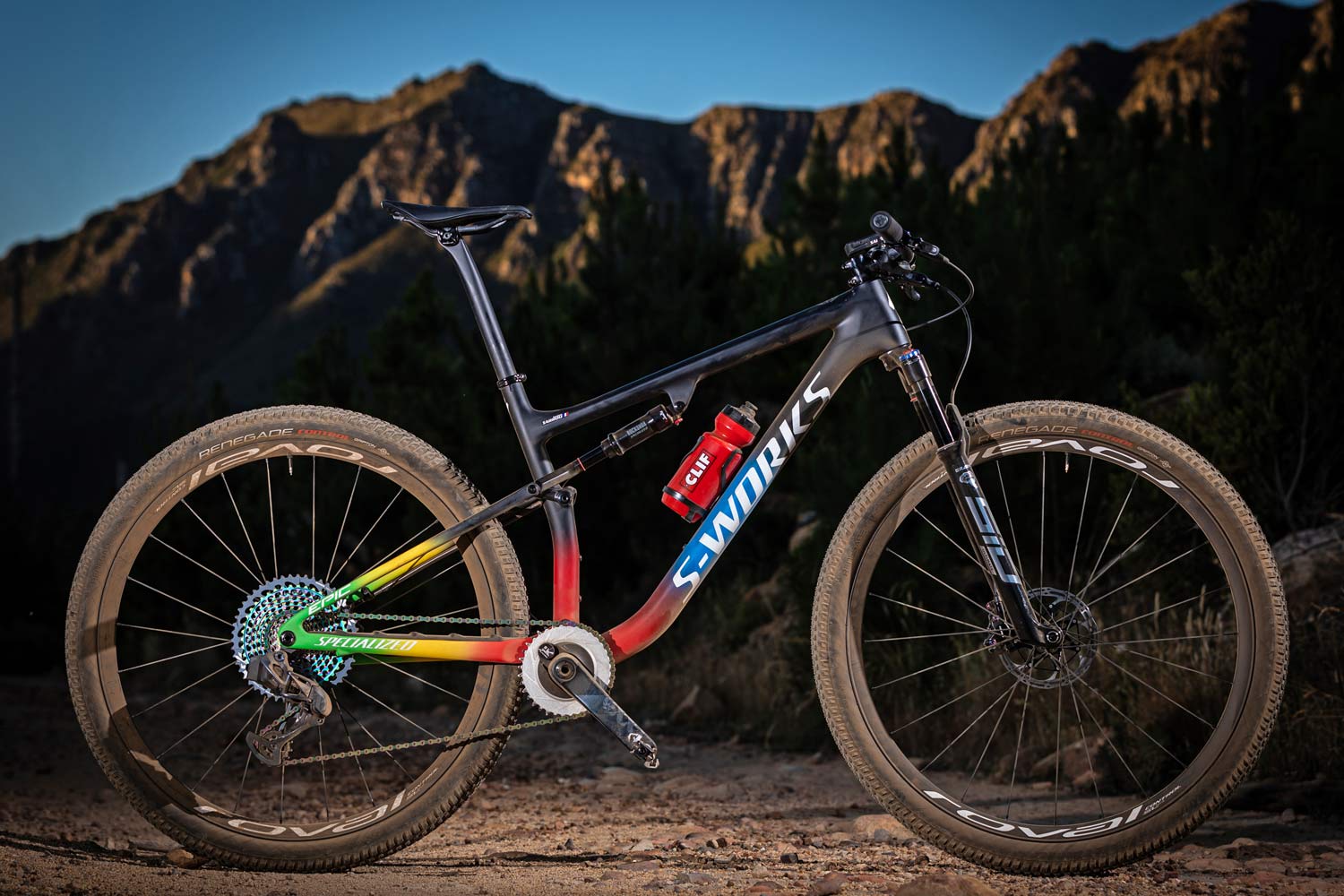 What do all those pro bikes tell us? 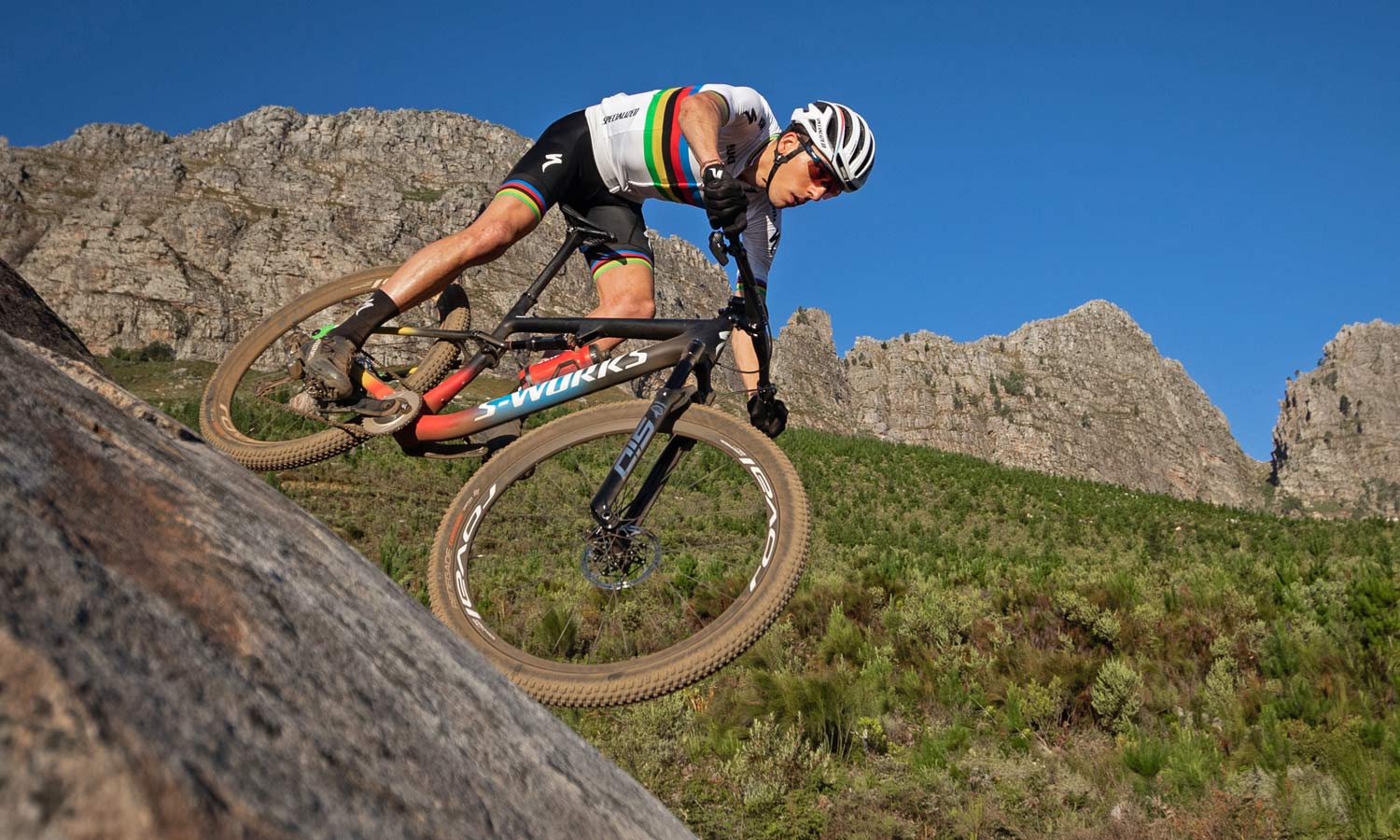 Up until now it seemed like even the pros had mostly reserved the integrated power meter rings for race bike only use, the newly crowned World Champ Jordan Sarrou seems to be having fun at the team’s Stellenbosch training camp.

Could this mean that SRAM now has a bigger supply of the new SRAM XX1 AXS integrated power meter chainring, and it set to official release it? SRAM haven’t provided an official release date, but as 2021 becomes an Olympic year again (probably?) we’d expect to see them become official if all these current & former champions expect to race with this power meter in Tokyo this summer.

Who is the women world champion?

I sure hope that other companies do not follow suit. Although I still think its a dumb idea in general, at least in road, you don’t have to deal with the conditions of MTB. In MTB, you have to think about bashing the ring on logs/rocks, and extremely muddy conditions that can quickly kill a ring. Even at half off, that could make for a really expensive ride. In addition, changing front ring tooth count is a bit more critical in MTB. While in colorado, a 30 or a 32T is about all you really need, but in the relatively flat Michigan, you’ll spend way too much time in your smallest rear cog. If your doing riding in multiple destinations, a non replaceable ring doesn’t make sense.

I hope Sram will get lot of s#1t for disposable power meters, no matter the cost. It is just fundamentally wrong!

$820 for a Disposable chainring/power meter? No thanks!

Your caption on Pauline Ferrand-Prévot is so wrong it’s not even funny. She is the CURRENT world Champion.

Yikes @onrhodes, you are right… going back and forth on how to label all of PF-P’s so many championship titles, I messed up what I’d written. Thanks for catching my error, so I could fix it!

Weird they didn’t just mount the rings like they did with the C1 power meter? That C1 was super unreliable, I went through 7 of them before I took the last warranty one that was sent and sold it off on fleabay.

I have a C1 and it’s been the most reliable of any PM I’ve owned. Not one single problem. Very impressed with it. Consistently reads a couple of percent higher than my powertap hub and trainer – which is to be expected.

Why why why would they do this? You are not gaining accuracy, battery life, and really anything else for that matter. Gaining stiffness? Hogwash.. The current power meters for mtb cranks is just fine and you can change the chain rings. Going to colorado for breck epic, throw the 32 on, going to AR for fun or nationals then throw the 34 on, going to flat FL then throw a 36 on… Can’t do any of that with this.

More important is that all of us know how fast Narrow/Wide chainrings wear out fast no matter what company makes them. It’s just the nature of them and the wide tooth always goes first. Those of us that ride a lot of XC have to change their narrow wide probably close to every year. Imagine having this thing, and after 1yr the narrow wide is worn and you need to replace.. Even my dentist friends with their S works would pass on this.. This is meant for the elite of elite, not end consumers.

P.S. the silver is ugly as @#$ Like all those bikes when you see that silver it clashes with the looks.

I love Quarq power meters, but this is a terrible idea.

Agreed with all the above: this is a terrible idea.

I will stick with my SRAM cranks and power2max NGeco power meter. It’s cheaper, accurate and I can fit whatever chain ring size I want when I want without having to mortgage the house or sell organs

To echo the point again: this is wasteful, offers no functionality that spider based systems don’t offer, and is really an anti-repair product. The Race Face powermeter fits just as many bikes, has multiple spider options, and allows use of chainrings smaller than 30t. Heck, I’d pick Stages before this thing. Who wants to give up easy gearing swaps?

I think you could make a argument for stiffness and accuracy. But really, those increases would be small and benefit few pros!

I go through at least two narrow wide chainrings a year and I don’t put that many miles down. My current xx1 PM is fine with no major issues.

What are the pedals in the first title photo?

@Dat, Kate was racing the Oil Slick edition of the HT M1-T, the T for her titanium axles.