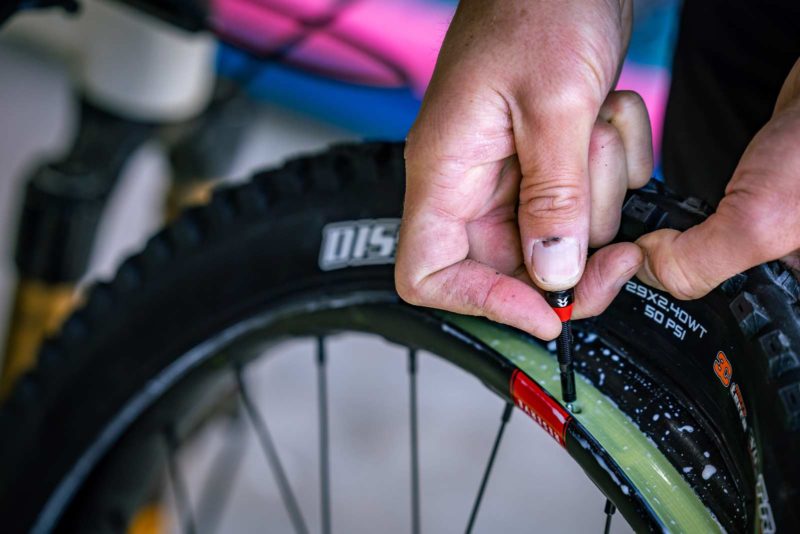 Reserve Wheels has released a new tubeless valve system that permits a higher air flow than the ubiquitously used Presta Valve. On the outside, the Reserve Fillmore doesn’t look too dissimilar to the Presta Valve that has seen over a century of use. Internally, it couldn’t be more different. It lacks a removable core, increasing the internal volume of the valve stem. Reserve say this makes seating a tubeless tire a lot easier due to the increased rate at which air can flow through the valve into the tire. But, that’s not all; the clever design means it’s almost impossible for the Fillmore valve to become blocked with tire sealant. Reserve say once you try one of these, you’ll never go back to Presta.

The common Presta Tubeless Valve is almost guaranteed to get clogged up with sealant over time, especially if your choice of tire sealant is any good. That’s because a lot of tire sealants these days are designed to seal holes that greatly exceed the width of the Presta Valve passage; Orange Seal claims ~6mm while Joe’s No Flats Podium Sealant claims up to 10mm. 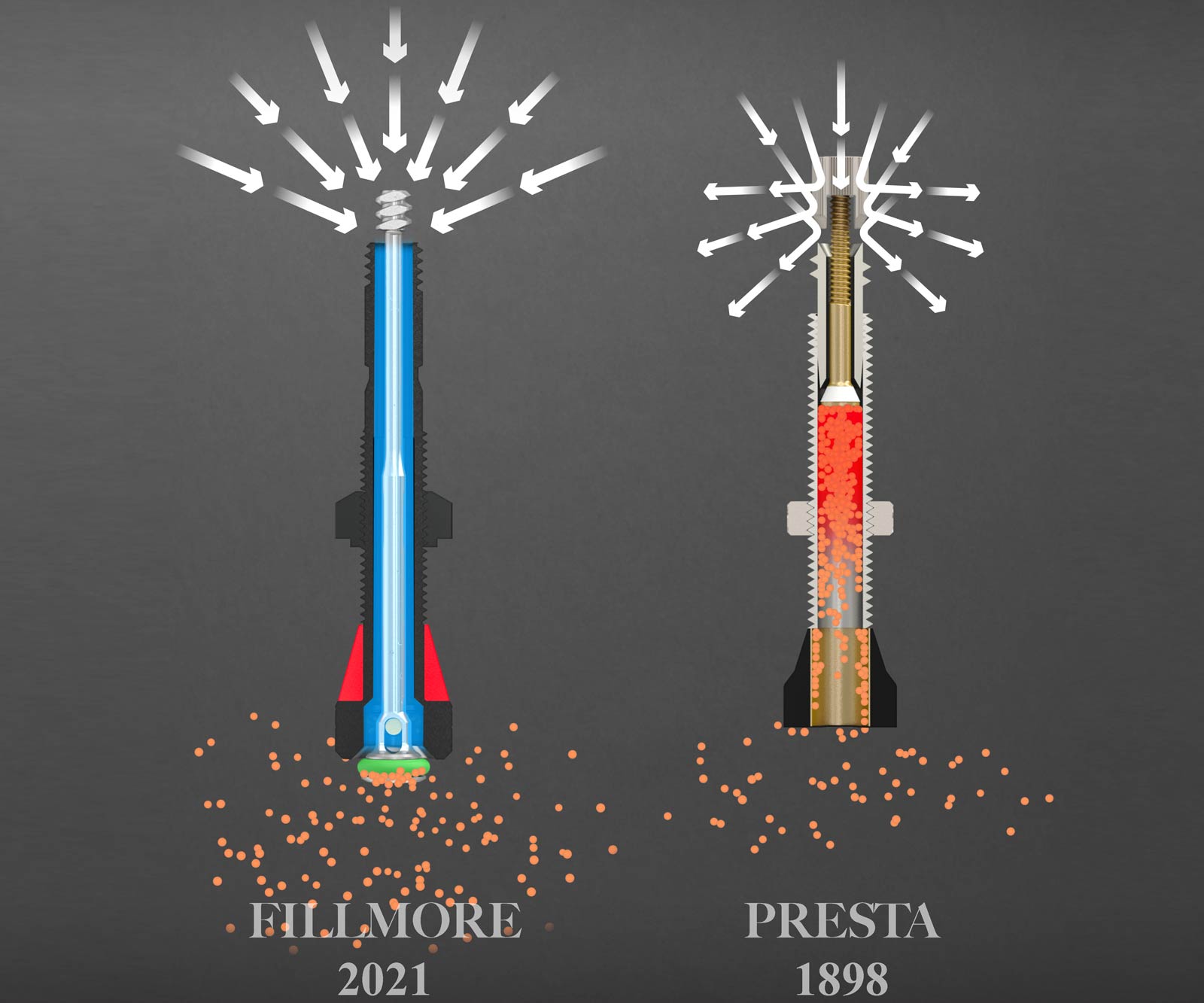 The lack of a removable valve core means the inside of the stem has a much greater volume. But, it’s not the increased space that prevents clogging. That’s by virtue of the unique “pop it” design of the Reserve Fillmore Tubeless Valve, meaning it is actually sealed by a large O-Ring from the bottom. This is not the case for the standard Presta Valve, which is sealed via a much smaller O-Ring at the base of the valve core. On the Fillmore Valve, the airflow hole is much larger and thus better protected from sealant. 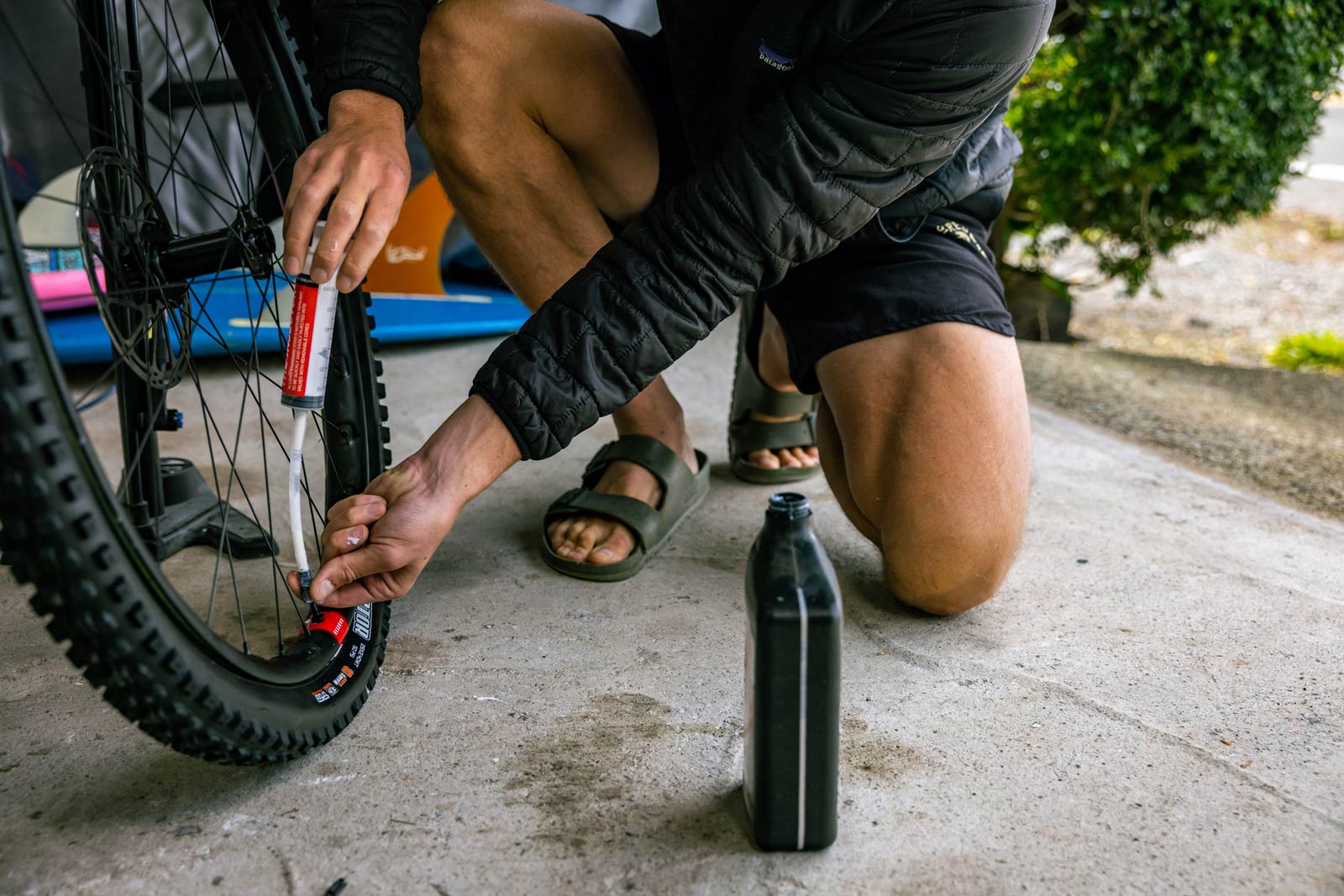 The only opportunity for the Fillmore valve to clog with sealant is if you go for the direct injection method, rather than filling the tire with sealant before popping the second bead onto the rim. With a regular Presta Valve, there’s an extra step which involves the removal of the valve core.

In the tech video, Garren from Reserve Wheels says regular Presta Valves “don’t let enough air in to seat a tire”. Well, that’s not strictly true. I’ve been able to seat many 27.5″ tires onto 30mm rims using the Presta Valve with the core still in pace. That said, it does become more bothersome the higher the tire volume gets, especially on 29″ wheels. I have often removed the valve core to increase the air flow rate, and even resorted to the use of an AirShot Tubeless Tire Inflator for really stubborn tubeless setups. 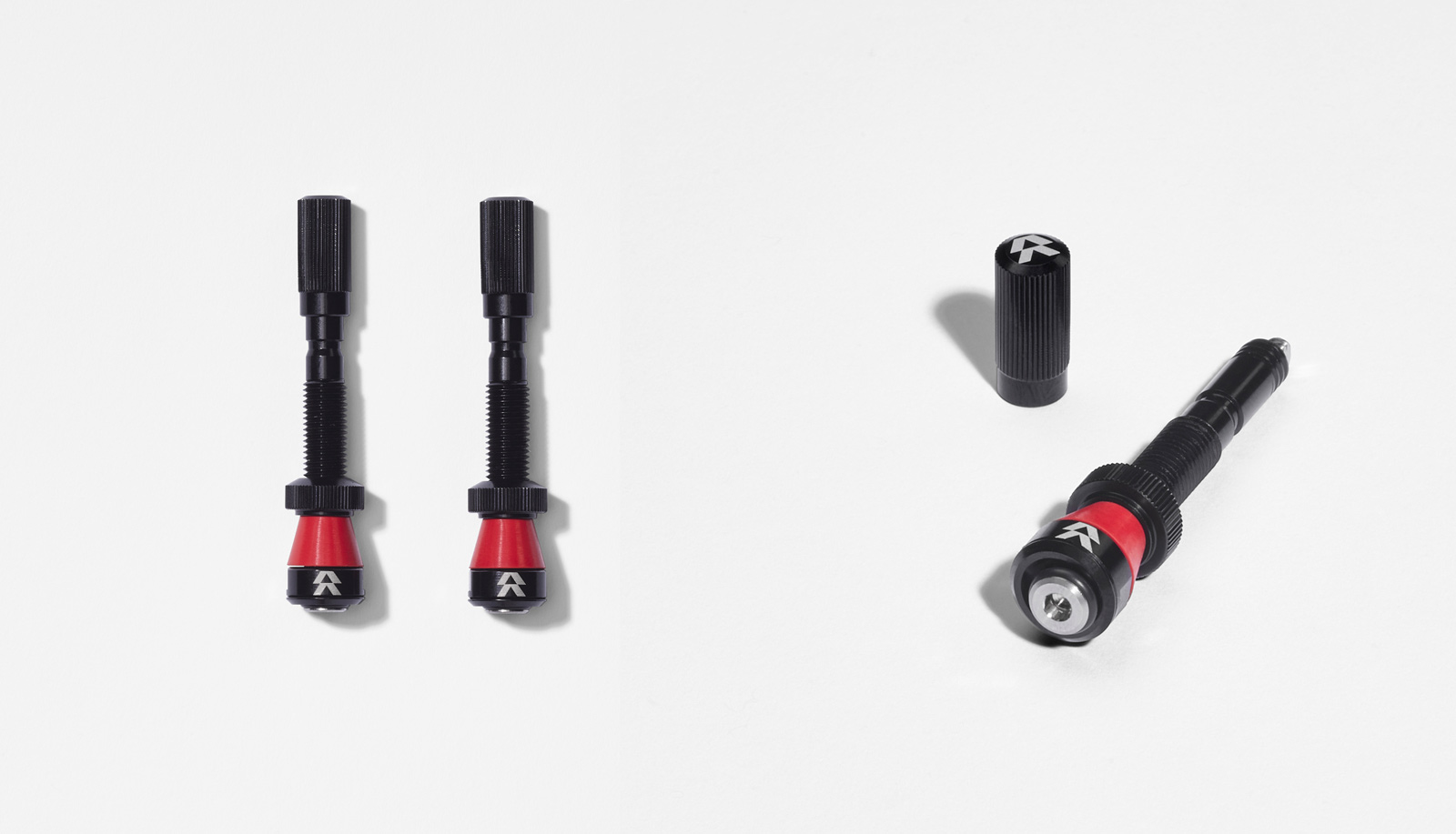 Either way, Reserve claim the Fillmore valve makes life much easier, regardless of the setup. And, it makes complete sense. The higher the rate of airflow, the easier it is to seat the bead onto the rim. A Reserve Fillmore Valve delivers 3X the rate of airflow of a Presta Valve. 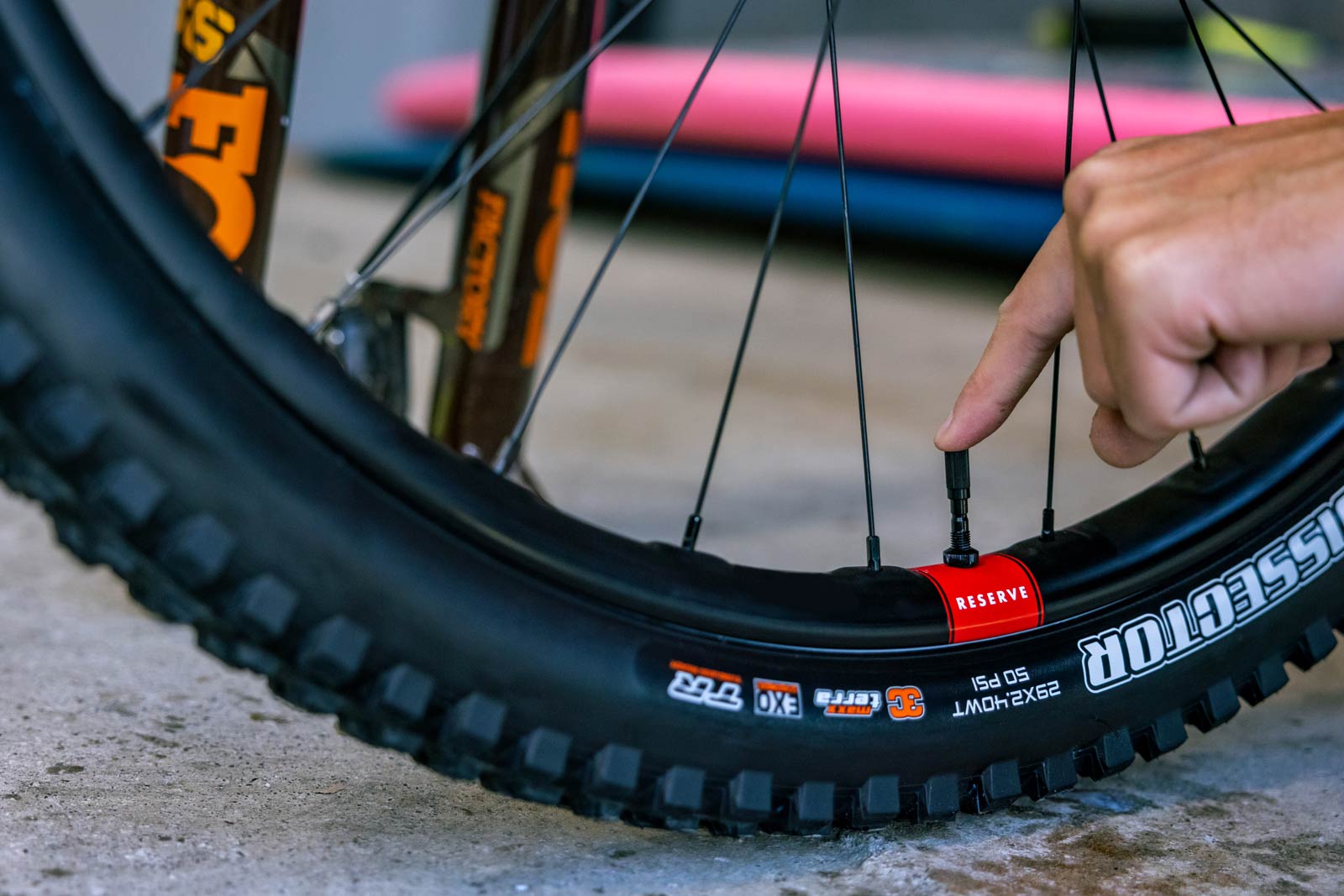 Another nice feature of the Reserve Fillmore is the micro-adjust. As you loosen the valve cap, the mechanism allows the internal piece of the valve to rise with it; from there you can depress the valve cap to let out tiny amounts of air to soften your tire before dropping into a wet technical trail that demands as much grip as possible.

Reserve say the Fillmore Valve is compatible with all Presta head pumps, so it should also work with digital pressure gauges like the Topeak SmartGuage D2.

The Reserve Fillmore valve is designed for mountain, gravel, and cyclocross rims between 18mm and 28mm deep. Due the lack of a removable valve core, Fillmore is incompatible with SRAM’s TireWiz – their onboard digital tire pressure gauge.

The Reserve Fillmore Tubeless Valves retail at $49.99 USD for a pair and are available now from dealers worldwide. 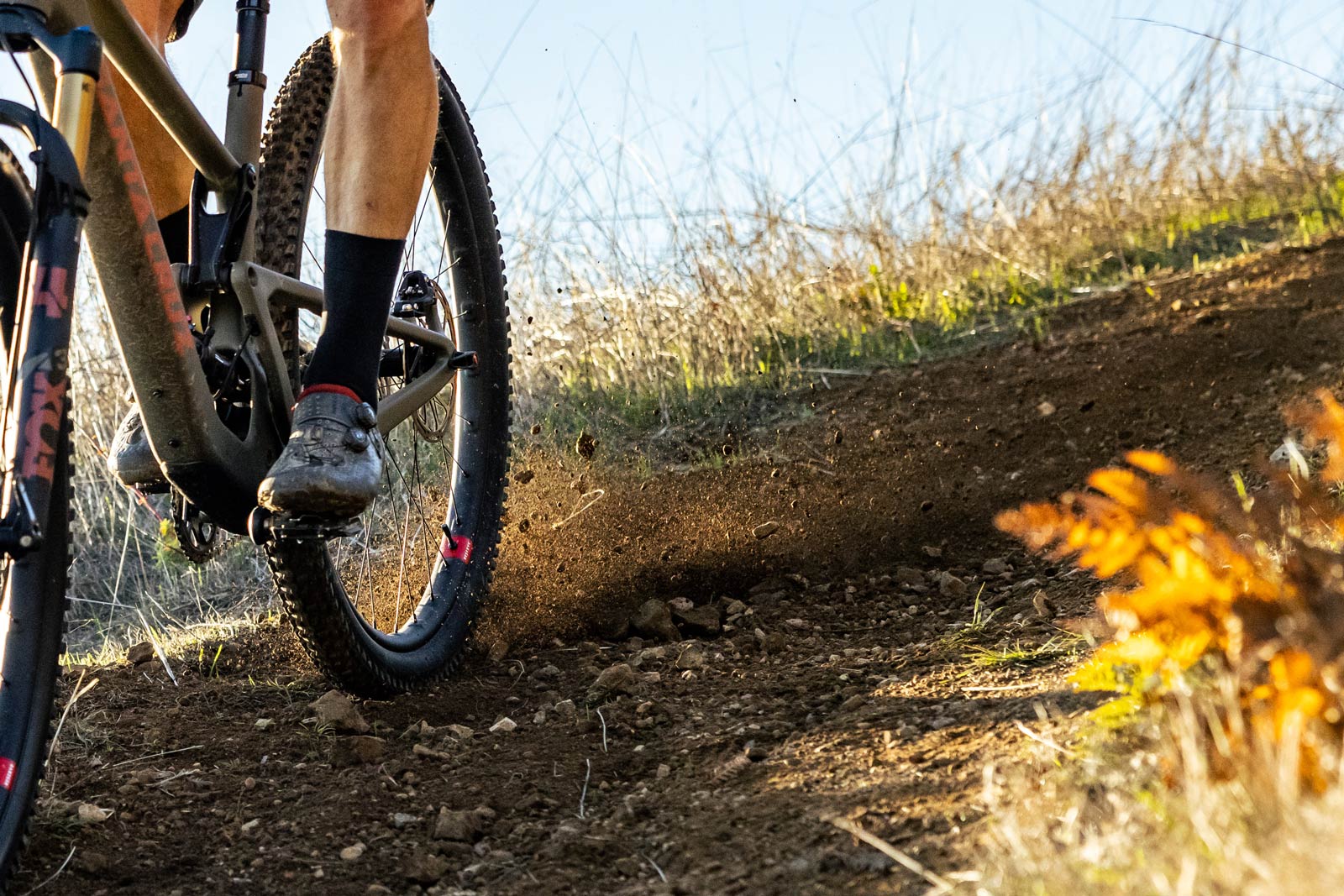 Can you run this on Cushcore? I know the CC valves have holes horizontally to allow air flow vs vertically which is obstructed by the insert. Awesome product!

Looks great – I just wish they made a version for deeper wheels as all of my rims are 30-35mm tall!

I was stoked until, the $50 price tag made me throw up in my mouth a little

Sure, $50 a pair is a high price to pay initially but then I think about how many valves I throw away because they get gummed up with sealant or the tip gets bent or broken. Not enough to fully “justify” the $50 but with all of the rest of the benefits, I’ll buy these. Fer sher.

I’ll stick with current presta valves with removable core. The removable part being key (and the significantly lower price). I can still remove the core to clean accumulated gunk off the seal or to inject sealant. If the core is to gunked up it can be replaced. If the stem gets gunked up, remove the core and ream the stem. If some sealant coagulates in this new Reserve valve stem how does one clean it out? Can the cross pin be pushed out? I guess i don’t find sealant maintenance the hassle that the Reserve valve is supposed to address.

And another product, that solves a non-existing problem… for a high price of course.

“The common Presta Tubeless Valve is almost guaranteed to get clogged up with sealant over time” – I have my old Stans valves (7yo and going) and never had any problems with them being clogged. Same with WTB, Conti and Peaty’s valves…

Eric Bennett – I assume not. CushCore would likely push up against the base of the valve preventing air flow. You’d want to use an insert that doesn’t sit so low on the rim, or one with holes in it like RockStop.

Update! Reserve say… “Fillmore works, but the poppet pushes against the CushCore and other tire inserts when you release pressure, so it takes additional force on the cap to let the air out of the tires”. I would imagine getting air in and sealant in through the valve would be a lot more problematic than letting air out.

And for people complaining about the price, a set of Stan’s valves already costs $30-35, I think that $15-20 is a fair price to pay for an innovative product that seems to have had some actual thought put into it to eliminate a common problem with existing tubeless valves.

Seraph – I think You got scammed on Stan’s valves. For less than 20€ You can buy a set with 2 60ml bottles of sealant.

“(…)some actual thought put into it to eliminate a common problem with existing tubeless valves” – The problem exists for a tiniest fraction of tubeless setup users (some of them because of negligence). Also, these Reserve valves have lots of limitations cause of the construction – forget about high profile rims, tyre inserts, serviceability etc…

@Seraph that’s baloney, even with pandemic pricing Stans are $15 bucks a set. (normally they were about 10 bucks) There is just no way these valves are $35 dollars better. Gunky valves are due to poor installation or lack of maintenance. Period.

Like my grandpa always said…..”when you do something you do it right or you don’t do it at all” This new Fillmore valve is the right design and Presta is the wrong design for tubeless PERIOD! If you don’t have issues with Presta you either don’t run tubeless, you don’t ride, or you don’t air up your own tires….

W@RNING, these do not work with most MTB rims. They are too short for anything taller than 28mm! E.g my Roval terras, Roval ControlSLs, are incompatible. Check before buying.