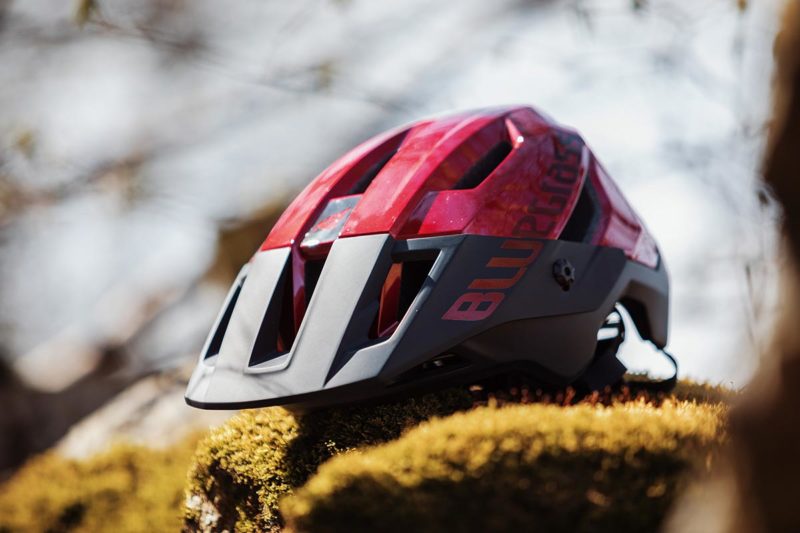 Bluegrass recently added a high-end open face mountain bike helmet to their selection of head protection traditionally dominated by those of the full face kind. The Bluegrass Rogue Core MIPS gets an aesthetic that is likely to split opinion, though we fall on the favorable side of the fence in that regard. Never mind what it looks like… what’s the fit like, and are its premium features worth the $180? 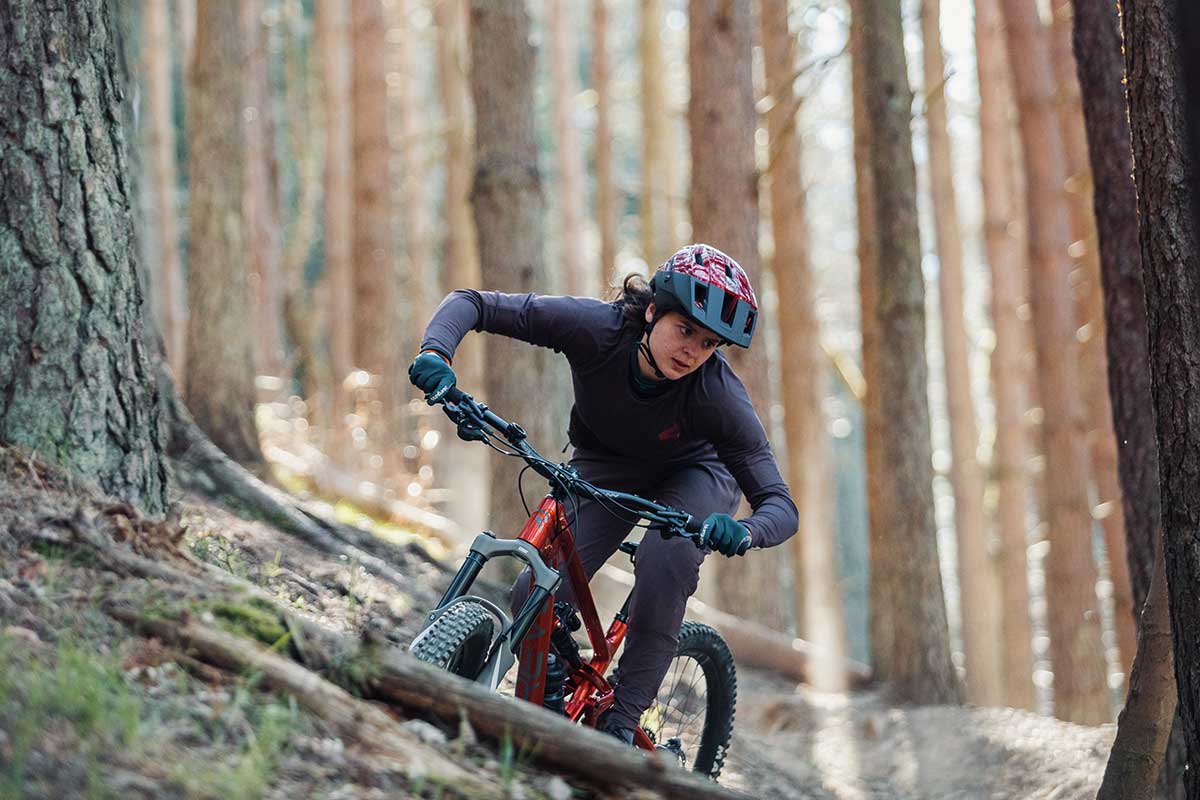 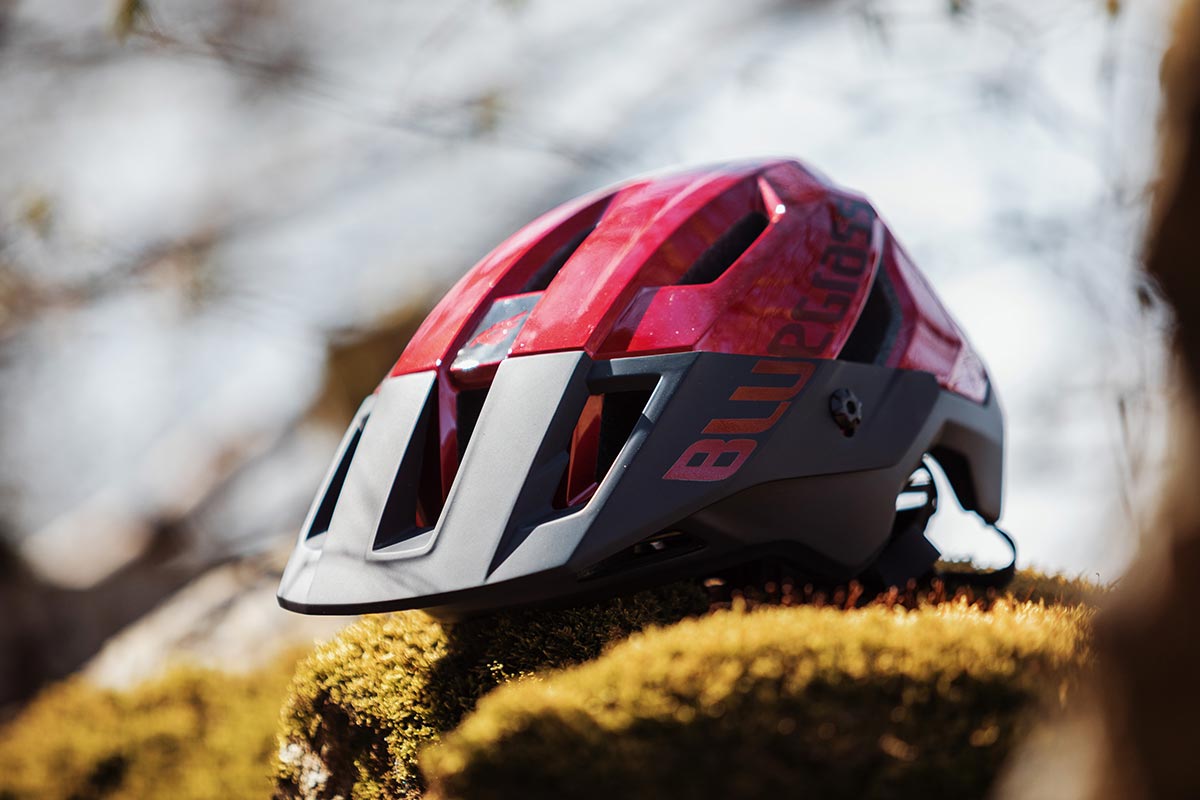 The Bluegrass Rogue Core MIPS is a lightweight trail helmet; the Small we tested weighed in at 355g.

The Bluegrass Rogue Core MIPS open face helmet has a rather unique aesthetic, with nineteen vents, six of which are elongated down the front, doubled up on the long peak in addition to the main body. In its downward position, the peak completes the shape of the front of the helmet with clean lines that flow downwards, lining up the decals on the left. 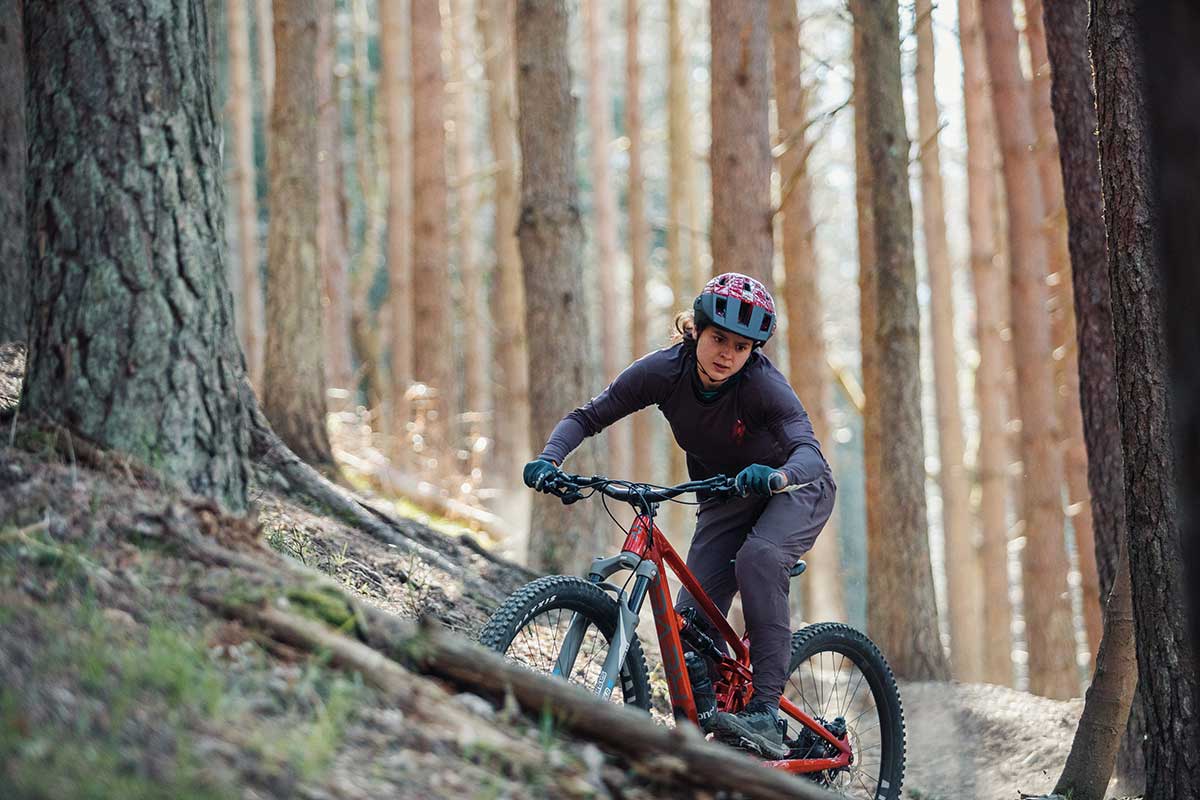 On the trail, the peak does a great job of keeping the sun off your face. However, on the very steepest of descents, the peak can, on occasion, obscure the view of the trail ahead. That’s when it’s in the lowest position; the peak can be raised higher to get around this issue but it doesn’t click or lock into position. That said, there is sufficient friction in the hinge to prevent it slipping down while riding. 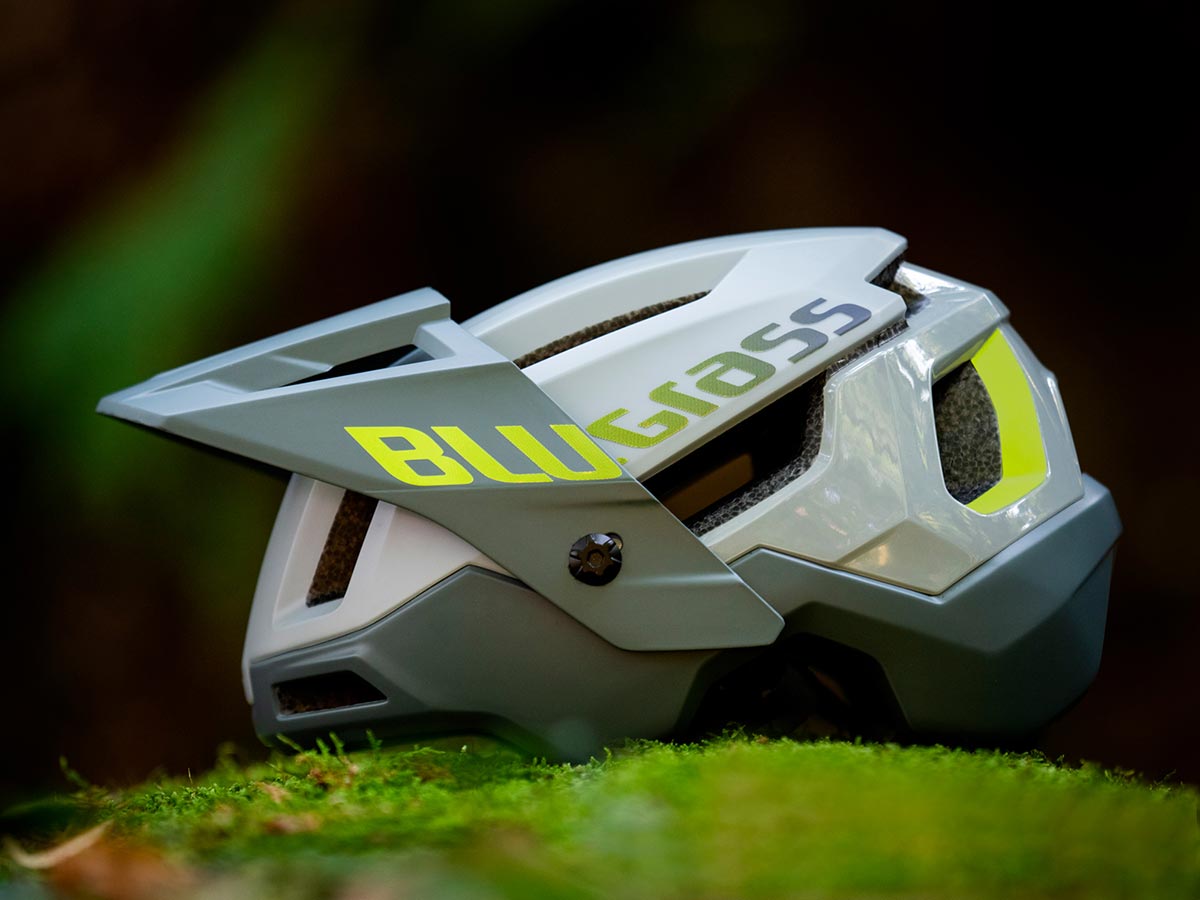 Bluegrass claim the Rogue Core can stow sunglasses through the vents at the front but, so far, we’ve been unable to securely stow our any of sunglasses anywhere on the helmet

When pushed right up as far as it goes, there is enough room underneath the peak for a set of Smith Squad goggles to stow comfortably and securely.

I’ve a fairly small face. Some helmets I’ve tested recently extend too far down the forehead to be usable with my choice of goggle. What will often happen is the goggle can’t sit high enough on my face, so it ends up pushing down on my nose, closing my nostrils. This isn’t an issue with the Bluegrass Rogue Core MIPS helmet as the forehead coverage isn’t quite as comprehensive as it is on other lids; the Troy Lee A3, for example. 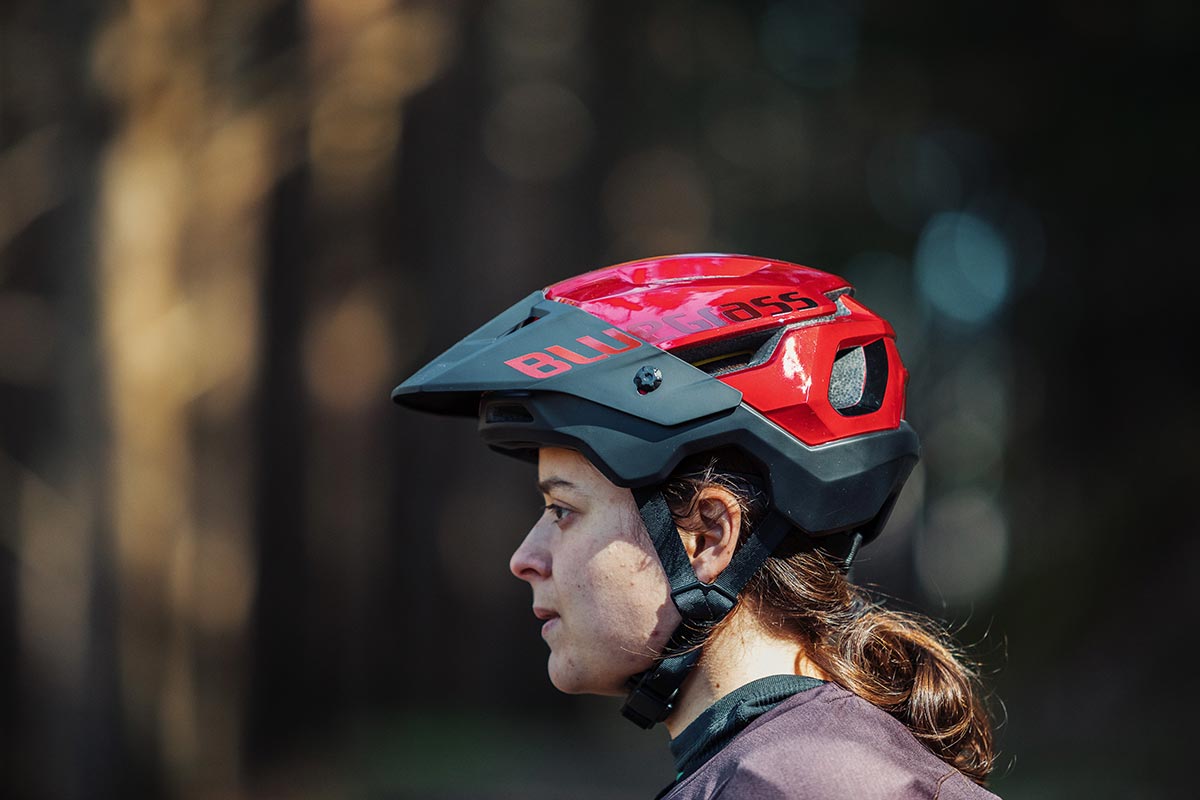 I wouldn’t say the coverage is insufficient, though. It feels, and looks, comparable to other similarly priced high-end helmets such as the Fox Speedframe Pro. 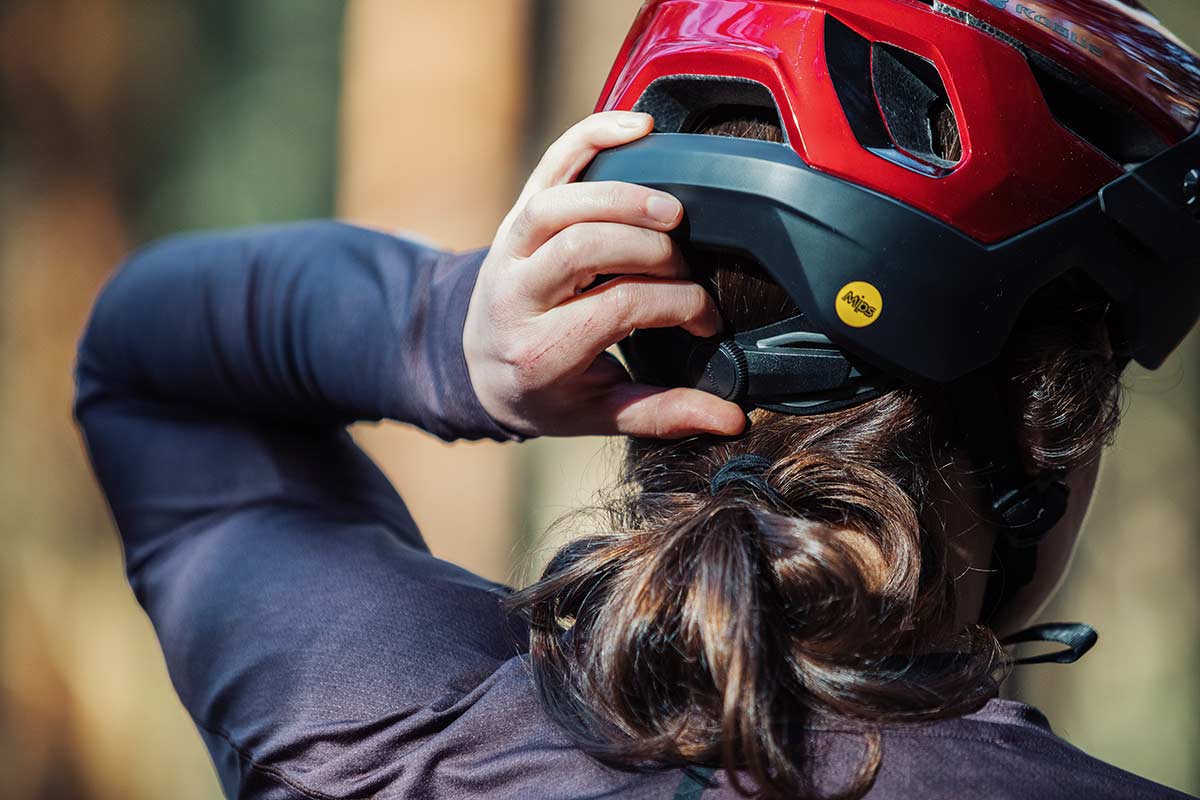 The Rogue Core features an adjustable retention system. The dial at the rear cinches the 360° head belt evenly around the head. On the head-facing side of the retention system are two rubber sleeves that help distribute pressure over a wider area, improving comfort at the rear of the head.

The retention system can be moved up or down by ~1cm either way, so each rider can find their perfect fit. I chose to run it in the middle position, as it cups the back of my head (or occipital bone) nicely at this height. The comfort liner does a decent job. 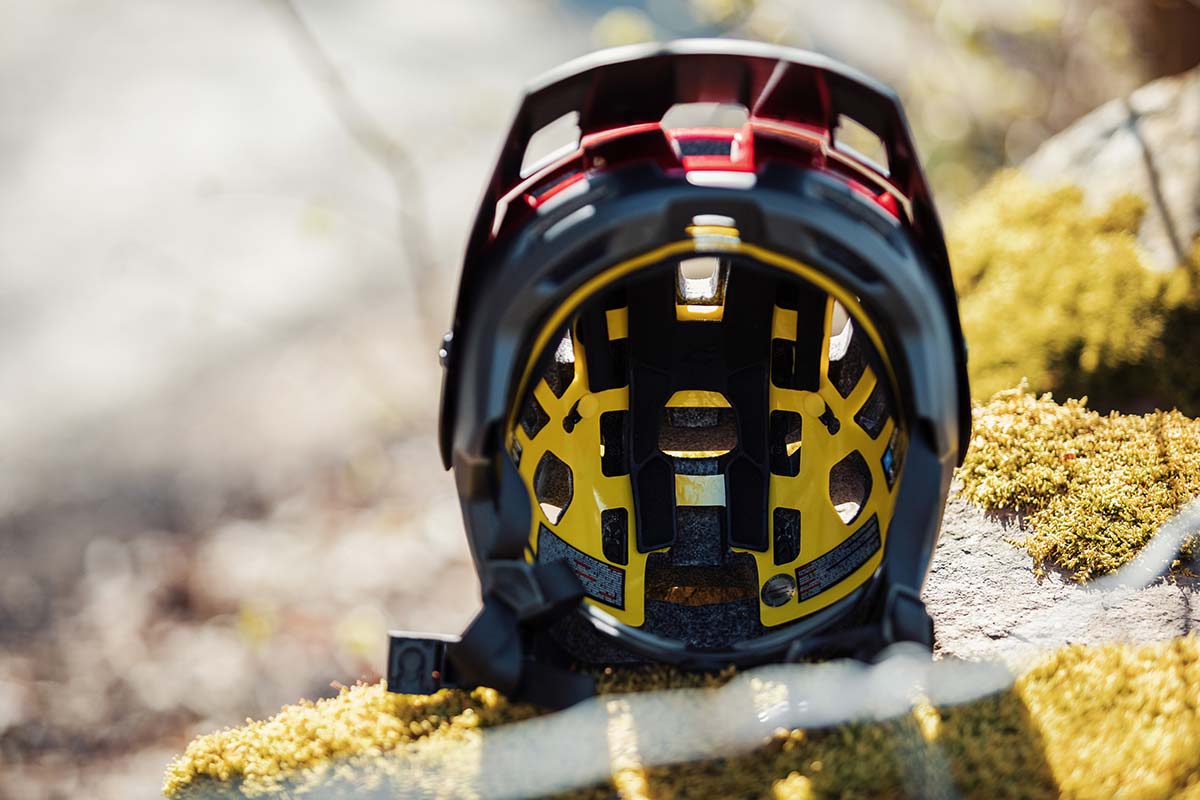 The Bluegrass Rogue Core MIPS helmet runs the latest MIPS-C2 rotational impact protection system, a must-have feature on modern day mountain bike helmets. When you cinch the helmet down onto your head tightly, you can move the main body of the helmet independently to the retention belt. That’s the MIPS liner doing its job; moving 10-15mm in all directions, ready to absorb rotational impact energy when you go OTB. 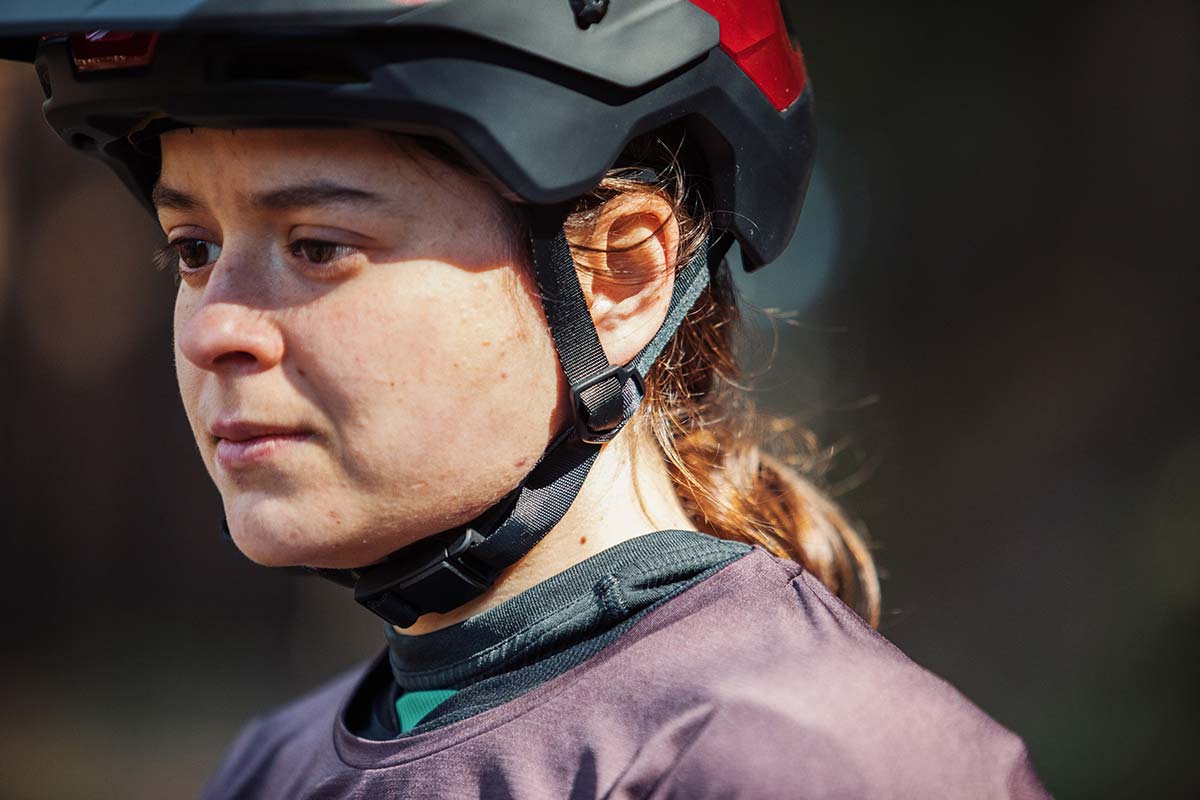 The chin strap of the Rogue Core MIPS features a magnetic FIDLOCK buckle fastener. There’s also an adjustable cam divider that allows you to alter the length of the straps that extend down from in front and behind your ears. This is critical for a good, safe fit. 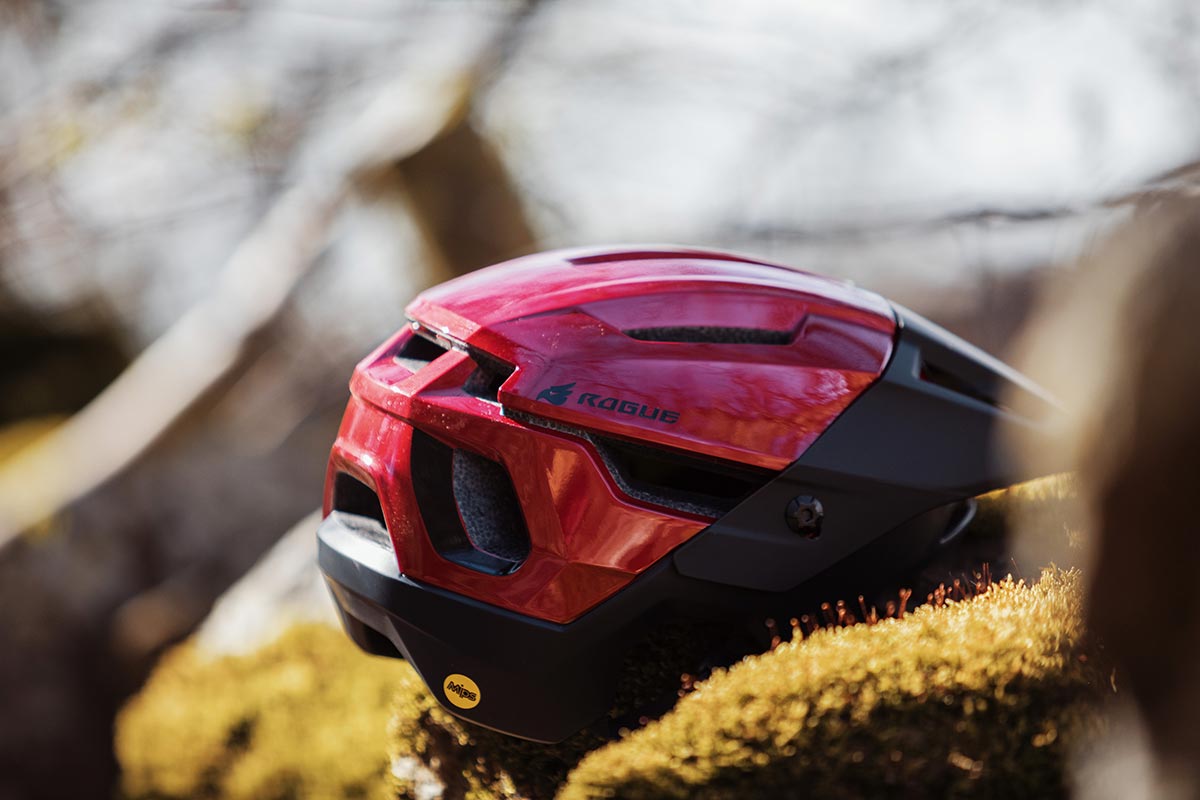 The Bluegrass Rogue Core MIPS MTB helmet is priced at 150€ | £130 | US$180 | CAD$250 | AUS$250. Bluegrass do offer a non-MIPS version. It also loses the premium feature FIDLOCK buckle, and it doesn’t come with a soft storage bag but it is more wallet friendly.

Curious as to why one would pick this helmet from a brand I’ve never heard of over any of the other gazillions of helmets that offer the same technology at a similar price?

Bluegrass is MET.
What brands have you heard of? Giro? The worst fitting helmets ever?

It’s not no-name.. Bluegrass is an offshoot brand of more aggressive helmets by MET.

I wear this helmet too. It was the only one in the shop that fitted perfectly and replaces my older Giro.