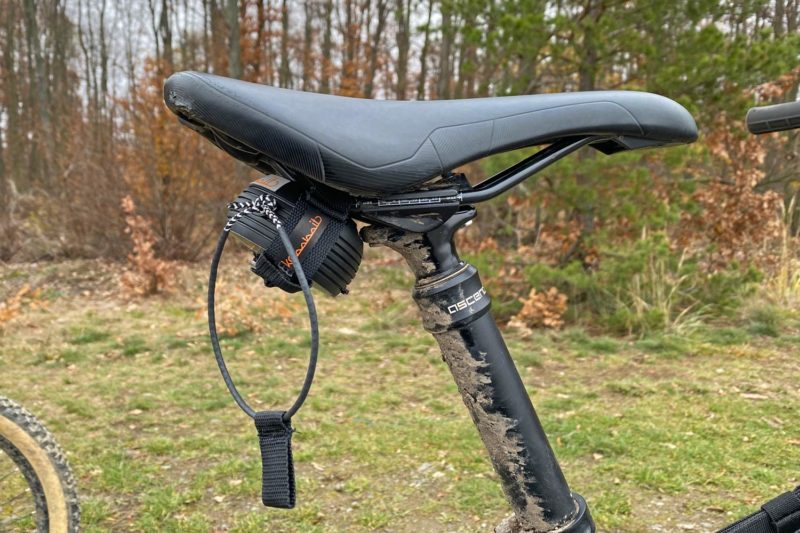 This new lightweight Kommit tow rope system hopes to make it easier to extend your riding adventures – whether with kids or any other riding partner that needs a boost up the hills. While there have been other tow rope setups over the years, this one is smaller & more versatile than those I’ve seen or had a chance to play with. Quick & easy to swap from bike to bike, I’ve already towed both my kids with it this past week… even tricked the older kid into towing her little brother (and me on the flats).

I can totally see how it could become an everyday carry tool on mixed group trips or multi-day adventures, too… 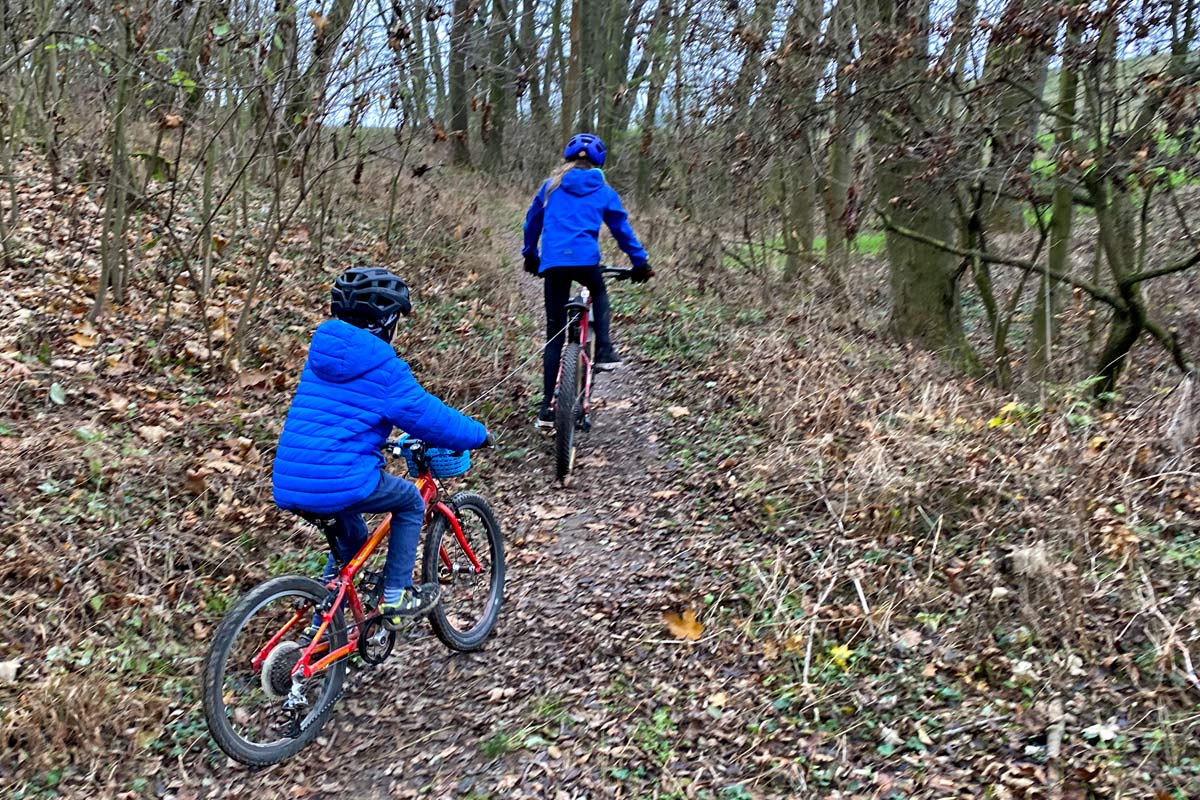 Designed at the foot of the Alps in Bavaria, Kommit takes its name from the German phrase ‘come with me’ – Komm-mit. That hints at it not just being a way to pull your kids up long hills, but also to assist adult riders who run out of juice before the climbing is done – or even pulling someone home with a mechanical that can’t be fixed on the trail…

Yet I expect I will use it most at its core with the kids – leveling the endurance gap between different aged children, or just opening up our riding together to trips farther from home. We can hit a lot more interesting trails if I don’t have to worry if they will be too tired for those climbs that always pop up late in the ride.

The Kommit tow rope also could make a handy tool for helping a fellow rider get home who broke a derailleur, a pedal, or whose electronic groupset ran out of batteries (all things that have happened to others on rides with me in the last year and a half.) That often means either unceremoniously waiting for someone to pick you up, or just suffering while limping home. Sure, each of those problems would have been avoided by preventive maintenance. But we all know that doesn’t always happen…

Throw them a line and perhaps Kommit would have at least made each of those a game of who gets to pull the defective rider the longest? 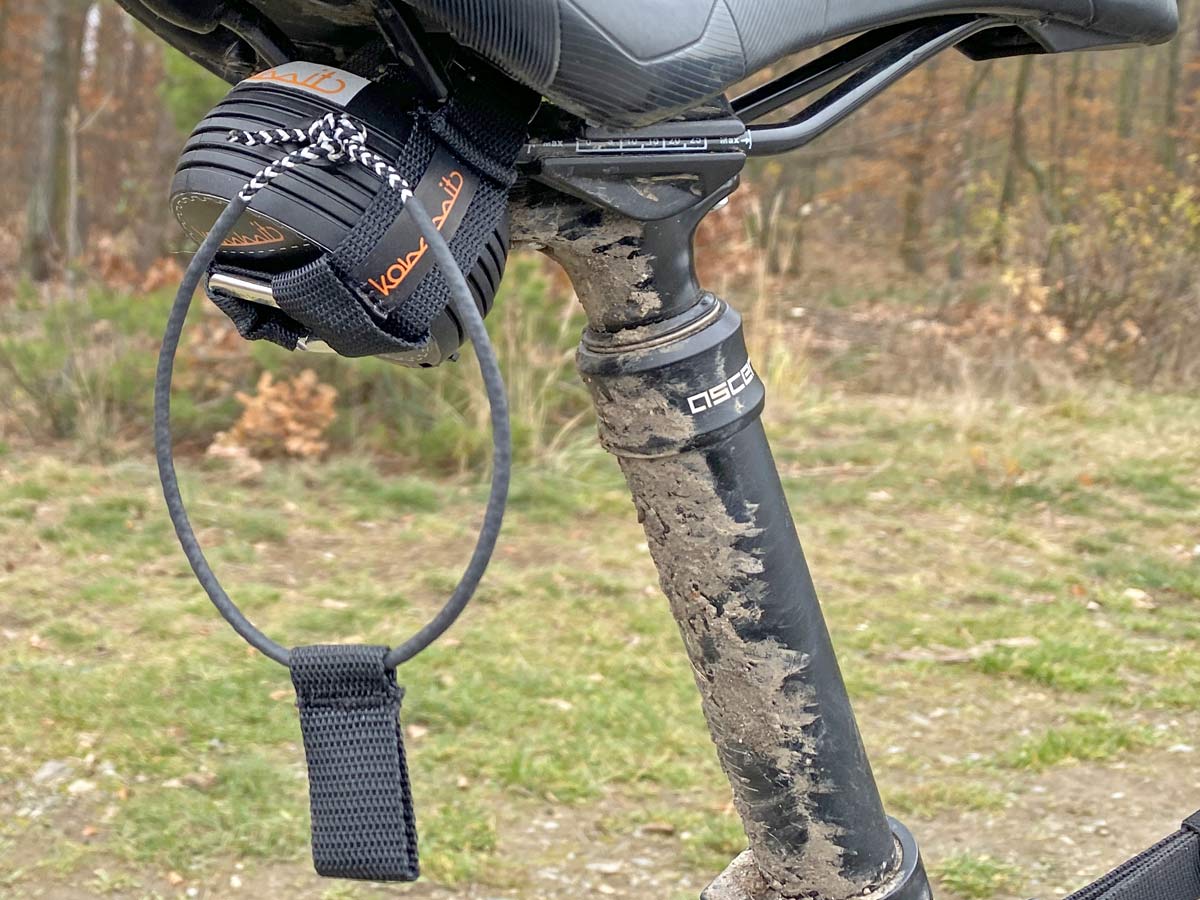 Kommit is essentially just a compact & retractable tow rope, much like a retractable dog leash. With a strong, non-stretch line, a solid return spring, and a simple reinforced loop to hang over the pull-ee’s stem, Kommit straps securely & quickly to the underside of your saddle rails. 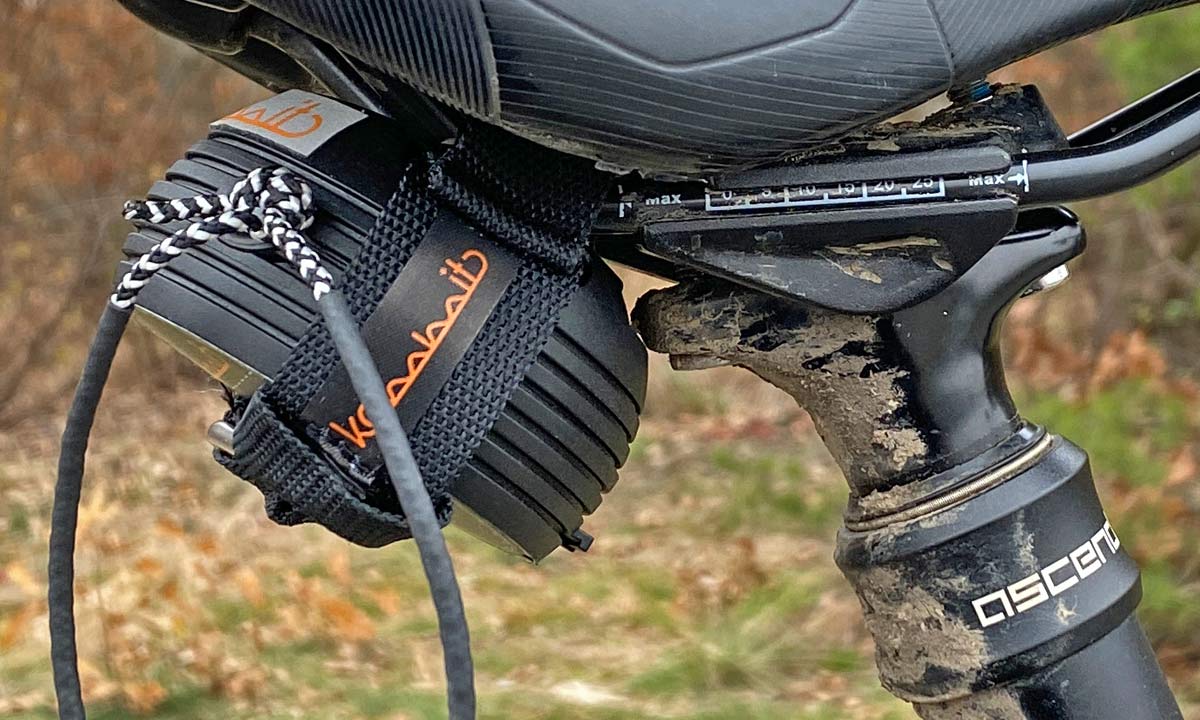 It was developed specifically to work on bikes with dropper posts, attaching quite securely to any conventionally railed saddle (round or oval). It has a little flat divot on top at the front of the puck-shaped housing, which gives clearance for the seatpost’s clamp and gives it a solid mount. 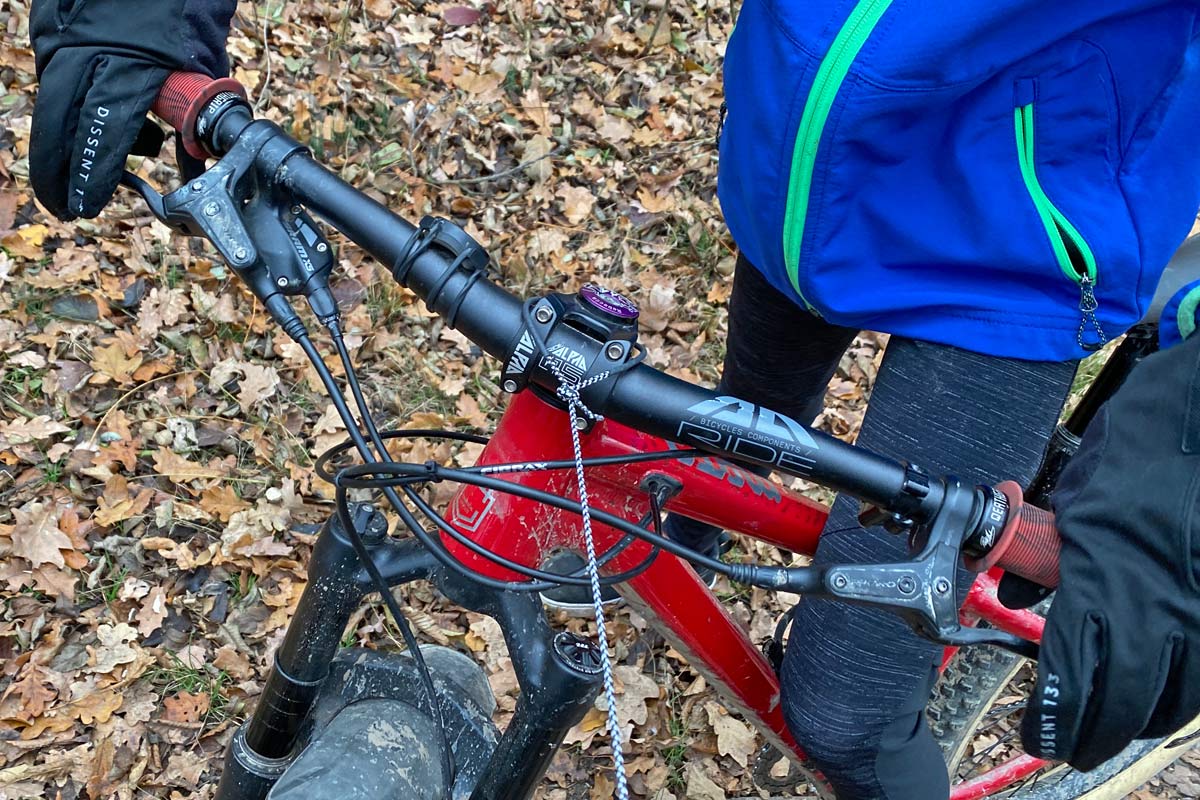 …then loop it over the top of your stem.

The Kommit’s stem loop has a rubberized covering to protect the ~2mm diameter braided black & white synthetic tow rope – an abrasion-resistant fiber adapted from parachuting. The 2m long tow line is rated for pulling 90kg under load. That’s plenty for towing kids, but for adults?

Don’t worry… That’s pulling force, not weight of what’s being pulled. So Kommit’s designers say that adults are good too. And that seems right, as I’ve already made my daughter pull me around! 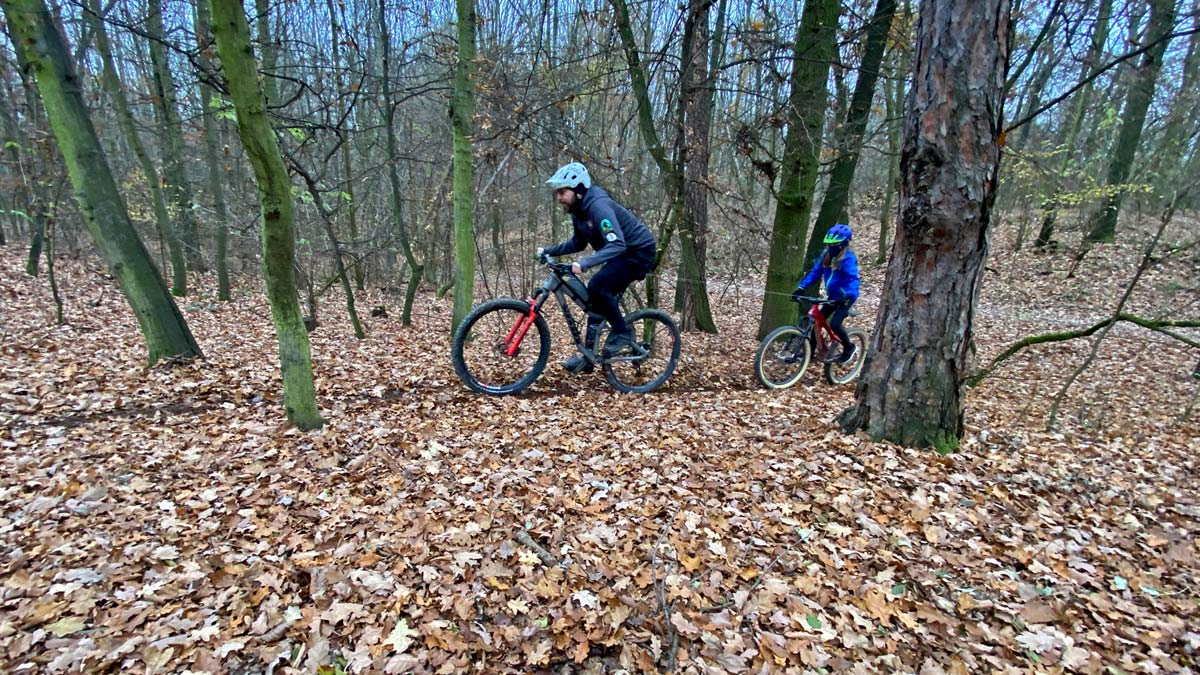 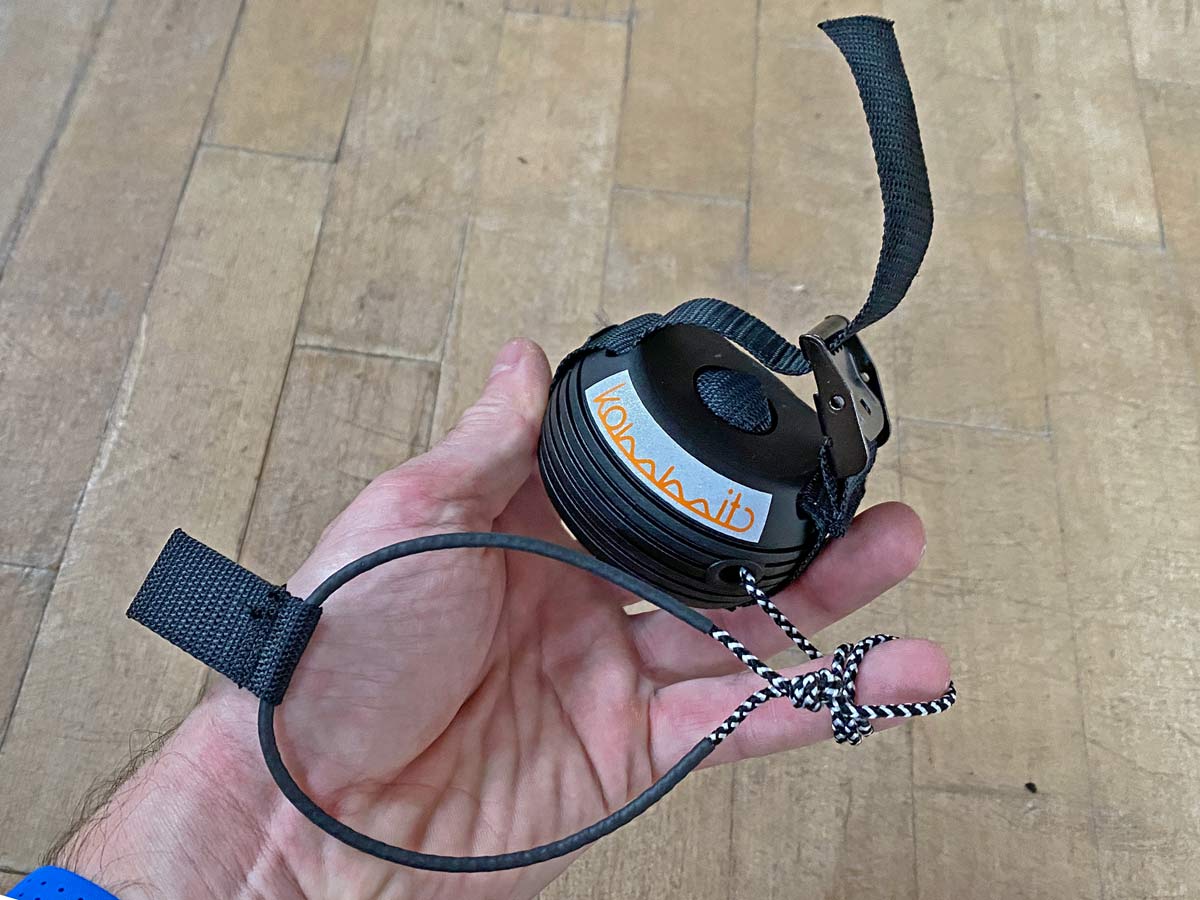 The core idea of Kommit was to keep it small & compact, since its early development almost six years ago. But just as importantly, to make it work universally with all types of bikes. That’s why it is saddle mounted, giving plenty of clearance over any rear wheel, but also making it work with dropper seatposts.

Editor’s Note: That’s not to say that it won’t put some big loads on your seatpost? Your bike is already designed to have your weight smash down onto your post, but I suspect a dropper is likely to wear out more quickly if you regularly pull someone with a Kommit. I’d think it might be worth thinking about a more solid seatpost if you plan to tow often, and banish any thought of superlight posts or probably even light, small diameter 27.2mm droppers for regular use. 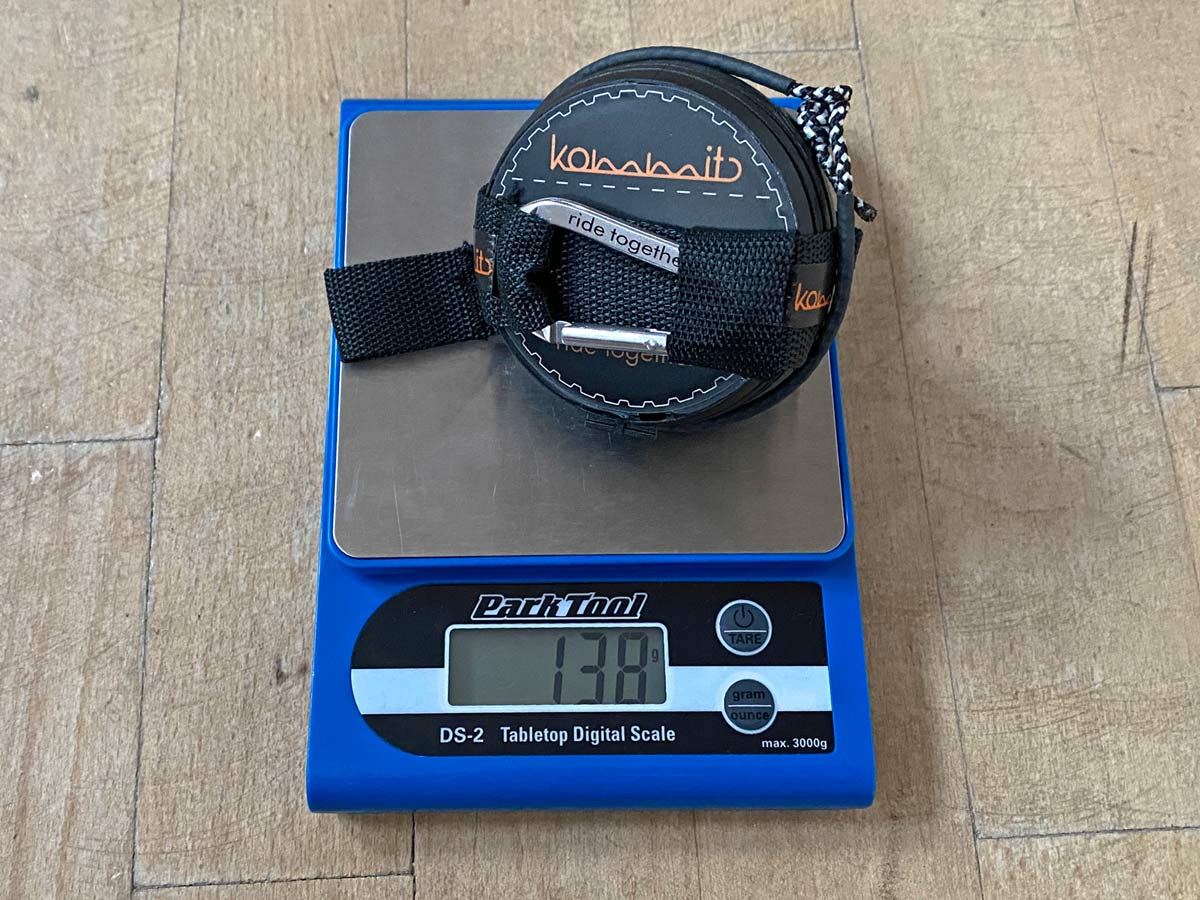 The tow rope device itself is a simple hockey puck sized device (~7cm in diameter x 4cm thick) with attached mounting strap hardware & a mini carabiner to work with tricky stem setups. The whole things weighs just 138g, exactly what Kommit claims. A rear reflective logo decal adds a tiny bit of extra visibility when there isn’t another rider hitching a lift behind you. 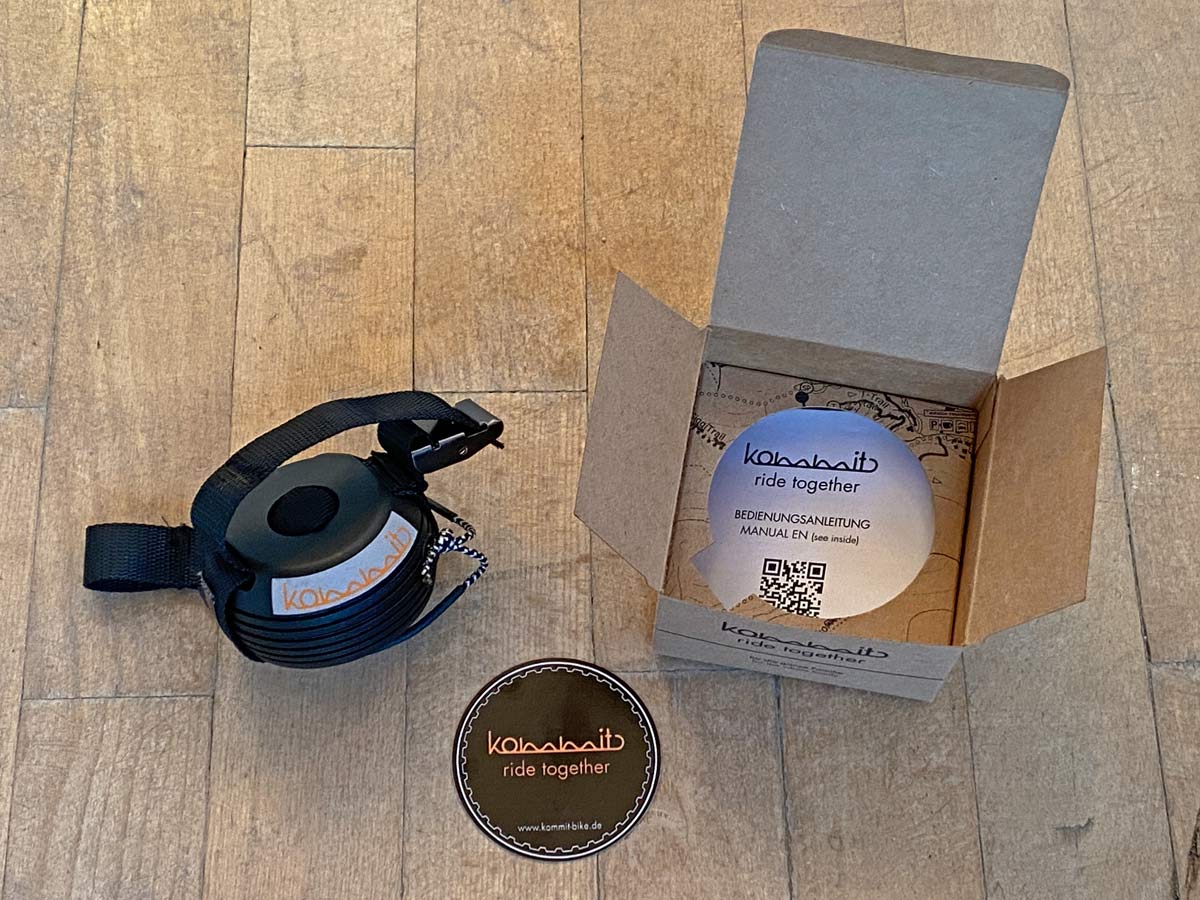 The 50€ Kommit is entirely made in Europe, with the core housing & rope coming to Germany, where RideTime manages final assembly. Right now, the Kommit web page & online shop are only ready in German (so feel free to use Google translate).

But the Ride Time team says they are working hard to get their English-language site up and running. In any case, its simple, no-plastic packaging and How-To instructions are already bilingual. Worldwide shipping is also available, with shipping costs calculated at checkout.

The Kommit attaches to your saddle with a simple woven nylon strap, held securely in place with a strong, all-metal cam buckle. The first attempt requires a bit of twisting to figure the best way to thread the short strap through the saddle rails – through the buckle & back. But once you’ve done so, it literally takes just a few seconds to install on most saddles, and even less time to pull it off.

Pull from the non-driveside to cinch it down tight. Reach in with one finger to depress the cam buckle to remove it.

How-To Towing: easy to use to catch a lift on the climbs

How to use the Kommit is even easier. Ride up next to the tow bike, pull the tab, and hang the loop over your stem bolts. It’s easy enough that my 10-year-old did it while we were pedaling on our first ride. My 6-year-old preferred to hook his bike up while stopped.

The trick is you need a pronounced set of rear bolts or step between stem & steerer to secure it in place. But if you don’t have such a protrusion on the stem to attach to, the tiny carabiner can also secure the loop under your stem.

First Rides – Towing & getting towed with a Kommit 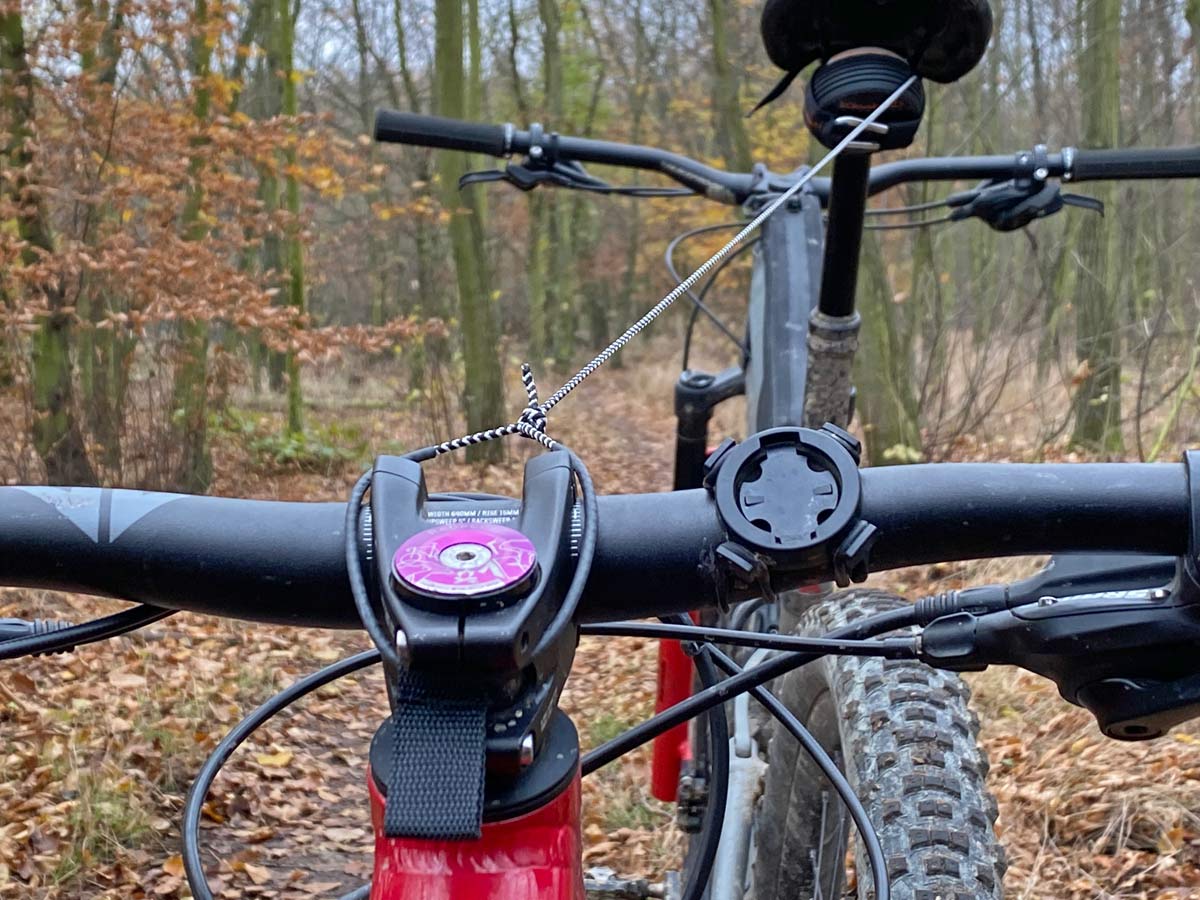 While the 90kg pulling limit doesn’t sound like that much (myself plus anything over a superlight road bike is heavier than that with clothes, gear & full water bottles factored in), in practice the rolling of your wheels will make towing adults fine too. Kommit says it can even be used for towing adults on e-bikes as long as both riders start pedaling together.

We’ve stuck to kids and mountain bikes so far with nothing but smiles.

In practice it has been easy to use, and will help weaker riders even on gradual climbs. We haven’t tried it on any real steep climbing yet, though. The trickiest part is when you start from a standstill and really do need to coordinate both pedaling at once to make it easiest on both. 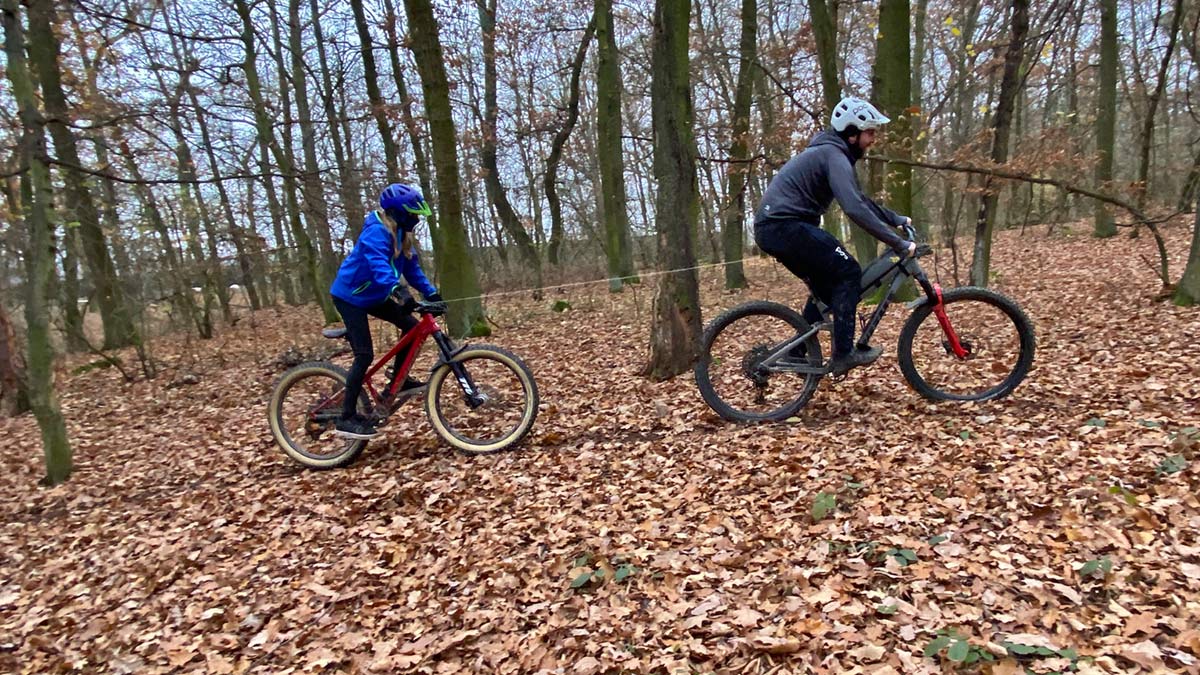 The 2m length leaves just about one meter between the riders’ wheels, which is enough for maneuvering off-road, yet still not a ton of space. It probably feels like a happy medium distance though. When the towed rider releases the tow rope it coils back up quick enough to not get caught in your wheel, but a longer line could be an issue. Once the rider in the back starts to get closer, it’s time to release the tab and ride on their own anyway.

I think this will get the kids and I through the winter hunting new trails to ride, then pop it into the bikepacking bags to see who I can trick into pulling me along on the first big adventure rides next spring!

Fail 1- pulling on the saddle of a dropper post (loading the post, and the rails, in a direction they are absolutely not designed to withstand)
Fail 2- non dynamic tow rope

Isn’t the tow whee also fixed on the dropper post? So in your words ” Fail 1″ is the same for the tiw whee.

Looks like a commercial from the antique “off road show”.