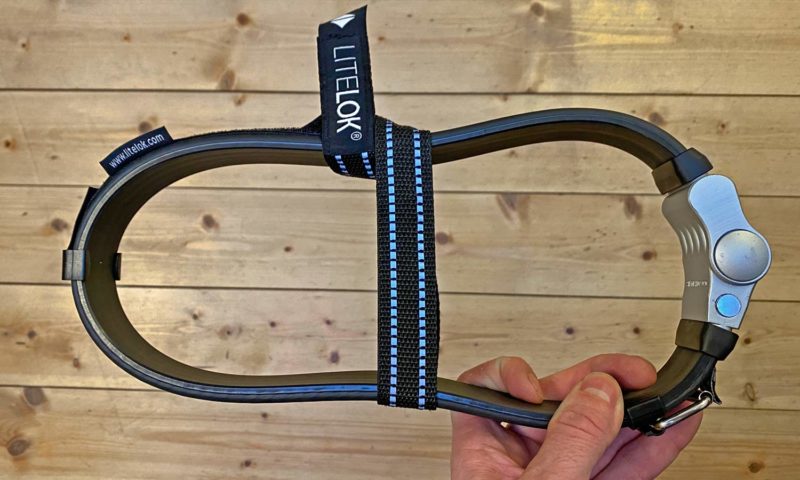 The Litelok Flexi-U flexible U-lock could make you rethink how to lock up a bike around town, pairing a Sold Secure Silver security rating to a much lighter & more adaptable option than any conventional rigid U-lock. The Flexi-U is essentially just a standard Litelok Silver pre-shaped to more closely mimic a U-lock profile. But that’s actually a good thing, giving users more options how to carry it with you, and a shape we are all familiar with. 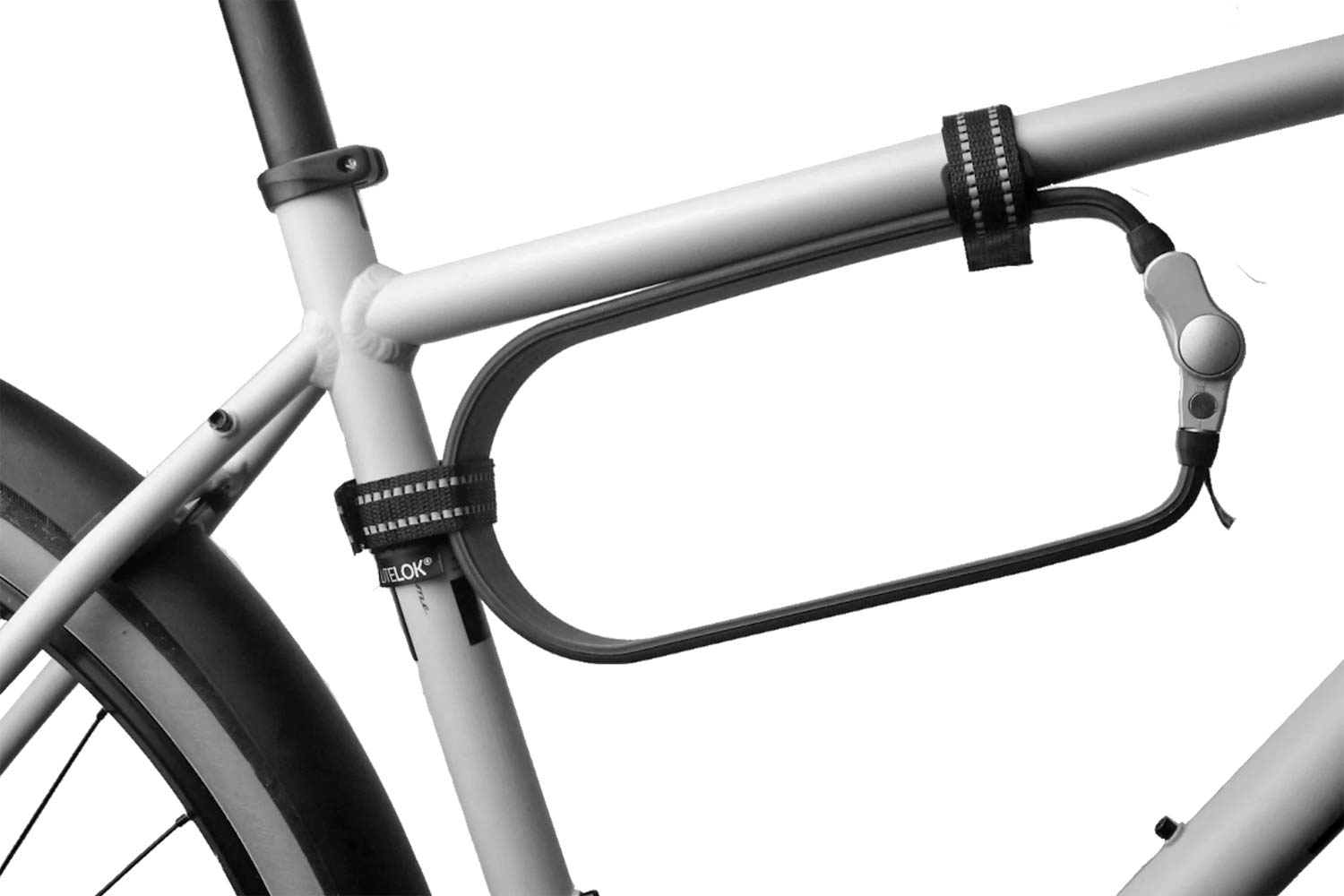 Now the new Litelok Flexi-U isn’t EXACTLY the same lock as at the top of the page. That’s actually my Litelok Silver 70. But they are the same lock. They share the same lightweight, patented Boaflexicore composite loop & hardened steel lock casing. The Boaflexicore loop mixes metal wires inside a polymer sheath, making the Litelok very difficult to cut through with any single tool.

Actually it’s resistant to cuts from bolt cutters, reciprocating saws, & attempts at twisting to defeat it.

UPDATE: Litelok has corrected us that the Flexi-U is NOT angle grinder resistant. “Unfortunately there isn’t a bike lock on the market that can withstand an attack from an angle grinder for a significant amount of time.” They say that’s why they launched supplementary Litelok Theft Protection insurance.

Of course it is not indestructible, but gets a medium security Silver rating (from widely respected UK Sold Secure independent lock test organization), while still readily trouncing similarly-rated U-locks that fail significantly faster in most tests.

These Silver-rated locks aren’t the most secure option Litelok makes, but balance solid security that has worked well for me for running errands in the city. I don’t lock any expensive bike up outside all day (or overnight), so these seem to offer great protection value for their weight & size. 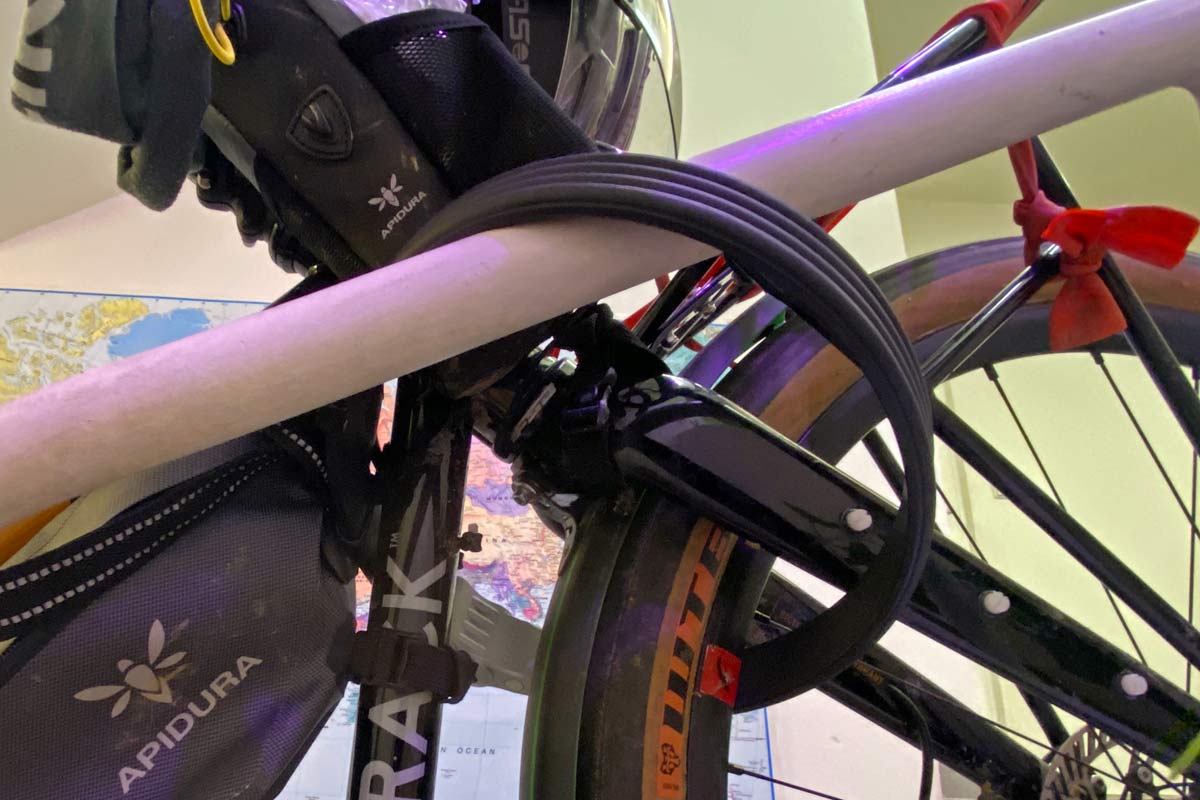 I’ve actually used the Litelok Silver 70 (instead of the new Flexi-U) to secure my own personal & test bikes when running errands since last summer. And it has been both way more useful than a conventional U-lock I had used before, and about half the weight.

The 70cm long inner circumference is a bit more than the roughly 60cm inner circumference of my old 10x24cm U-lock. But it is the flexibility that makes it so much better. While the rigid lock would never work around a 10.5cm diameter post (or tree), the 23cm diameter circular Litelok Silver 70 bends around anything short of 25cm across, while being flexible enough to at least get a loop around one main frame tube on the bike. 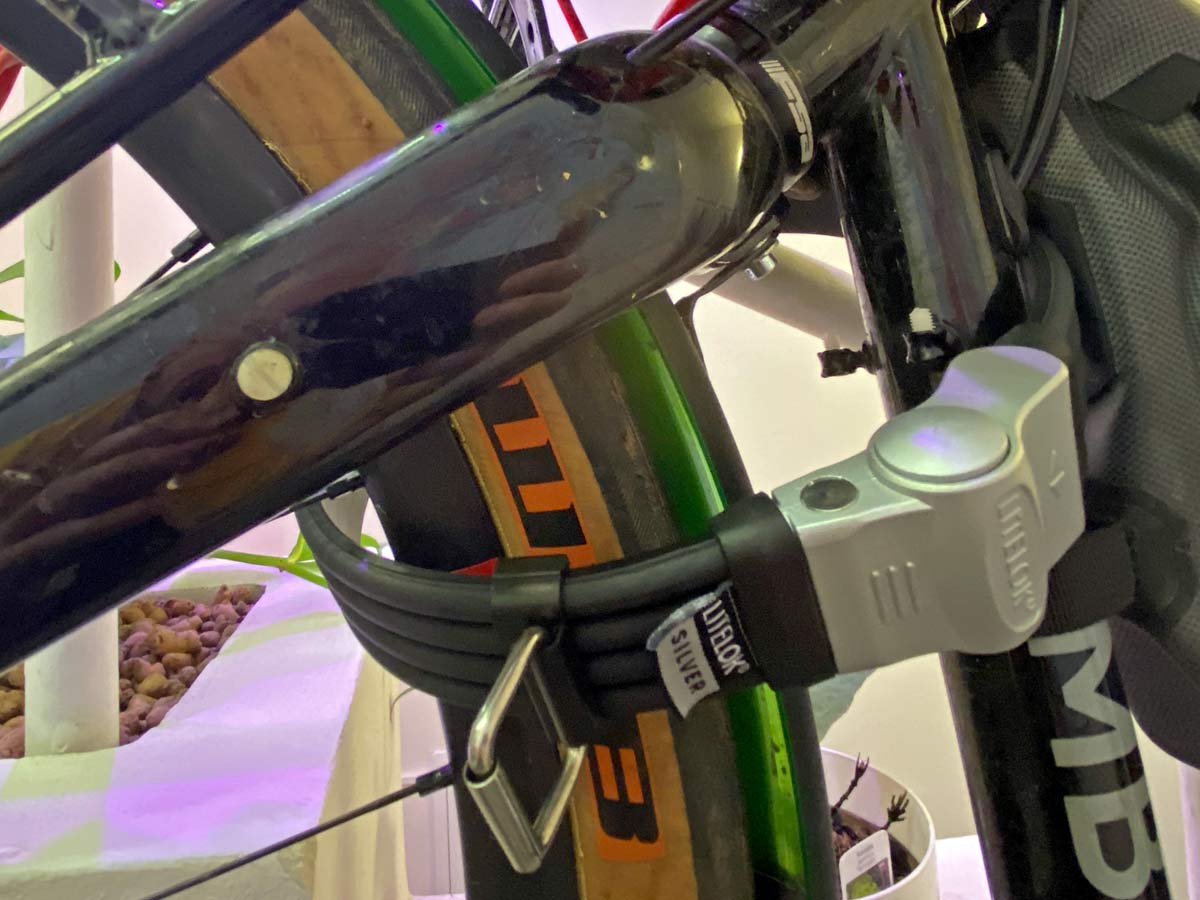 I usually end up locking around a smaller pole or rail anyway. But still, the flex in the loop then makes it easy to lock up a wheel & the front triangle too. The best thing though is the light 780g actual weight, including the waist strap (down from 1500g for that old conventional u-lock, but still 50g more than Litelok claims).

So what bothers me about the Silver 70 is that it is essentially a big round loop? Litelok suggested strapping it flat to the toptube. But that was always a hassle since it wanted to return to its resting loop shape, and of course brushing up against it while pedaling. Strapping the round loop inside a frame doesn’t really fit if you have bottle cages on the bike. It does include a velcro strap to loop it around my waist like a belt. And while that worked and was often my preferred method of transport, I’d probably prefer a heavier-duty & longer Hiplok chain if I was carrying it like that. 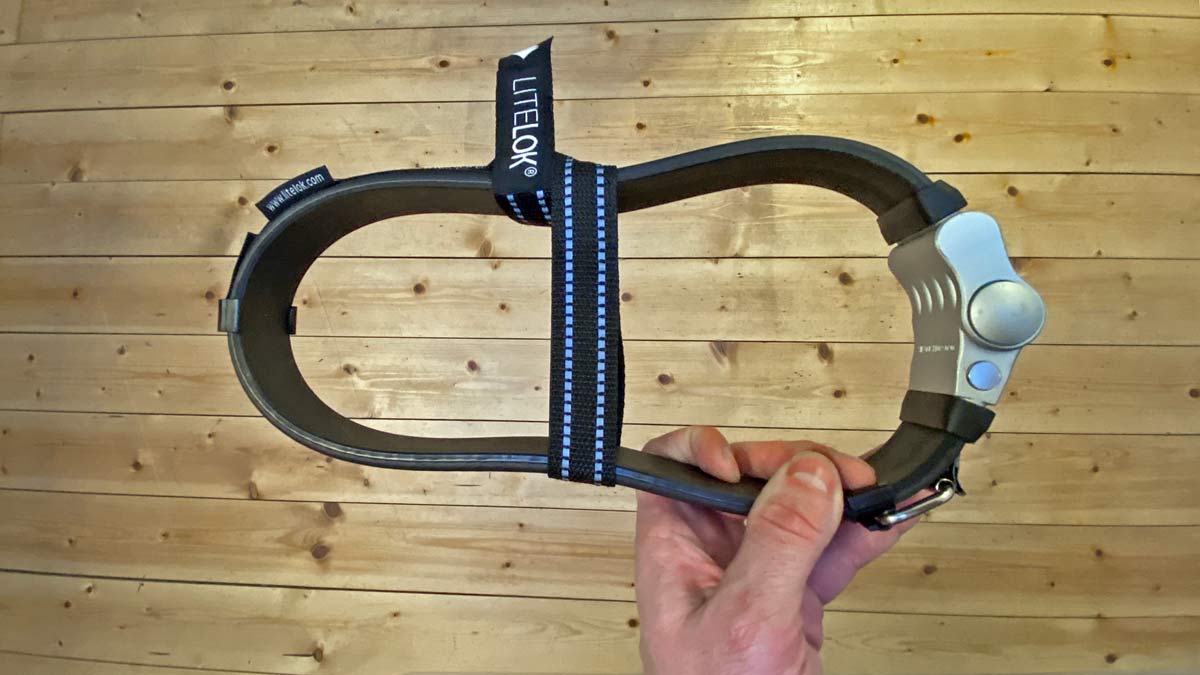 Now that I’ve seen the Litelok Flexi-U, I’ve effectively just converted my Silver with the velcro strap (#whydidntithinkofthat). It will now fit under the toptube on some bikes without interfering with cages, and on my Bombtrack commuter it’ll tuck in the Apidura frame pack (which was oddly much more difficult before this trick).

So which one would I recommend? It really depends on where you plan to stick put it on the bike. If you want to carry it around your waist sometimes, go for the original Silver. If it will always stay strapped to your frame, pick the Flexi-U. 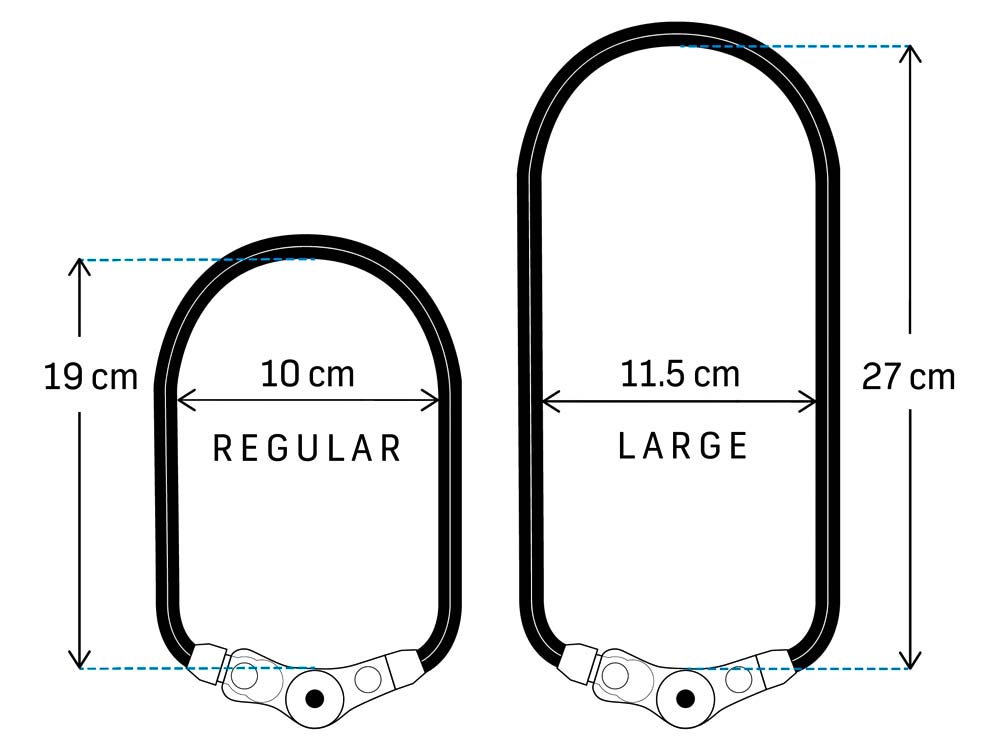 The new pre-shaped Litelok Flexi-U comes in two sizes: Regular at 640g (same size as Litelok Silver 52) or Large at 730g (same as Litelok Silver 70). They are available now for pre-order ahead of deliveries starting on February 10, 2020. That does mean a couple weeks wait, but also that you save an extra £10 if you order now, currently £60 & £70 respectively.

Another lock for the LockPickingLawyer.

Yeah, except for the part where it only takes 16s to cut through one if you use the right cutters. https://www.youtube.com/watch?v=D-On0DGcDlc

The disc detainer lock is relatively difficult to pick, though.

While this lock may be fine for some situations, I wouldn’t say it is near a good U lock in security as lockpickinglawyer cut through it’s big brother, a litelock gold, in 16 seconds.

You can say that but he cuts pretty much every lock, you can see how well a regular silver does in the video Litelok did too?

I saw he picked it, but I don’t really care about pick resistance as I don’t think any criminals actually pick locks. Honestly this is probably a nice cable lock, but it’s still a cable lock

No more effective really than an Ottolock, which is worthless. Less than 16 seconds to cut with the cable cutters most bike thieves now carry in the rucksack; snip, snip and your $5K is speeding down the lane…

Litelock is the best at making up the dumbest testing videos. Wow You can twist it up more than a U Lock. A piece of fishing line would have performed even better.