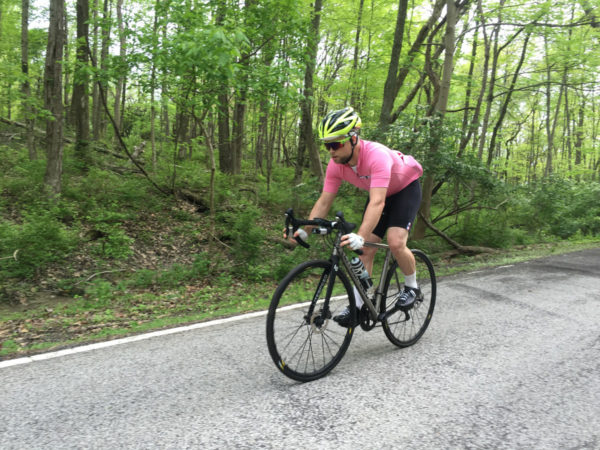 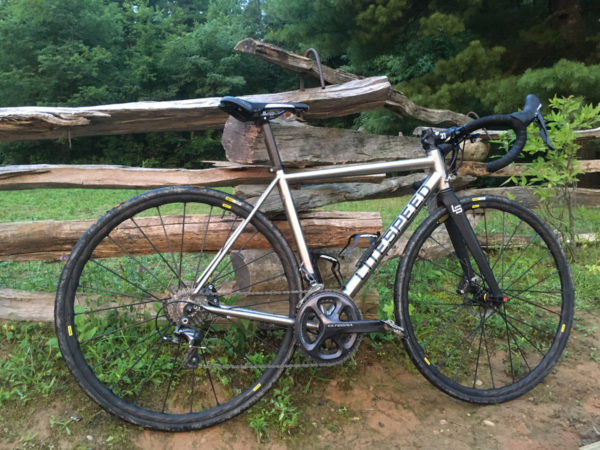 Stay around bicycles long enough, and you’re bound to hear someone gush about the magic of titanium. You know the mantra – lighter than steel, better ride qualities than aluminum, and less prone to rust and corrosion? It seems that there is little doubt that titanium as a material itself is an attractive product from which to build a bike.

When it comes to actually building that bike though, it would appear that all things are not created equal. It’s not the easiest material to work with due to its hardness and need for increased care when welding. Because of that, even the best titanium bike companies are still honing their craft. Whether that’s improving on the welds, trying different finishes, or experimenting with new tubing shapes and wall thicknesses, titanium bikes continue to improve.

Which brings us to one of the most accomplished Ti builders in the game – Litespeed. For more than 30 years now, Litespeed has been improving upon their interpretation of the perfect titanium build. They’ve also been working to improve their process as well, as they settle into their new manufacturing home. It’s still located in Chattanooga, TN, it’s just much bigger with more open space for improved work flow and room for expansion.

I got a chance to check out their new facility when I drove through Chattanooga to drop off the T3 Disc that I had been riding for the past few months. It was a sad moment to hand the bike over knowing that I had ridden my last ride with it, but I was able to get quite a few miles on the T3 before I turned over the keys… 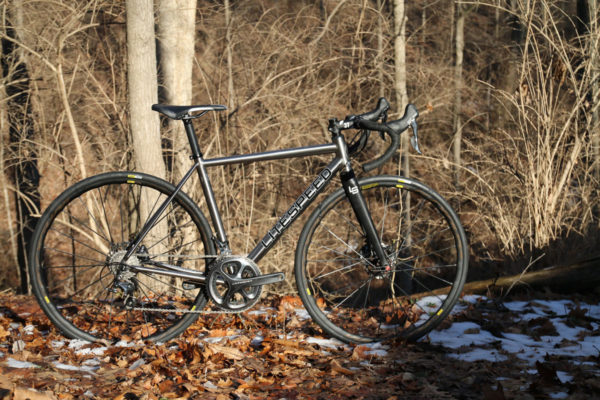 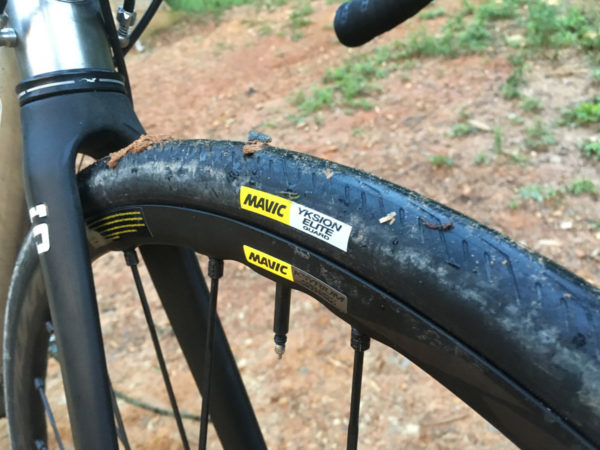 When it comes to categorization, it’s hard to figure out just where to place the T3 Disc. Road bikes continue to evolve with the addition of disc brakes and bigger tire clearances which fits the story line of the T3. While it doesn’t have clearance for huge tires, it will fit bigger rubber. In this case it was fitted with Mavic’s 28mm Yksion Elite Guard tires on their Ksyrium Pro Disc All Road wheels result in a fairly large 28mm tire. 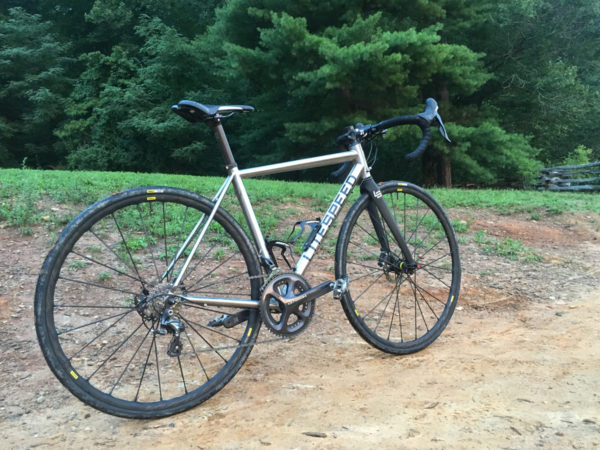 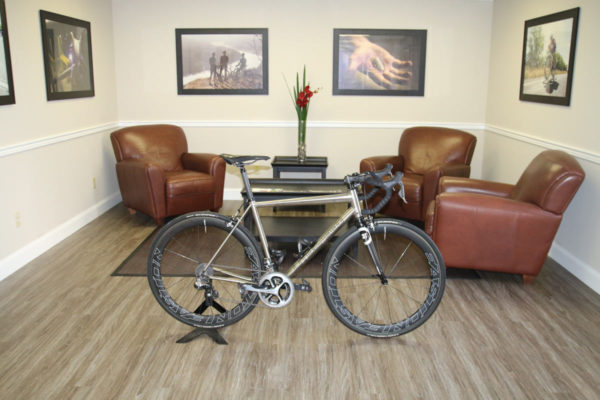 But don’t let the bigger tires and disc brakes fool you. Unlike a lot of disc road bikes we’ve ridden, this is not a “comfort bike” with a tall head tube and slack angles. Instead, the T3 Disc features the same geometry as the T1 SL – Litespeed’s top level Ti race bike. That gives the T3 a decidedly quick demeanor. 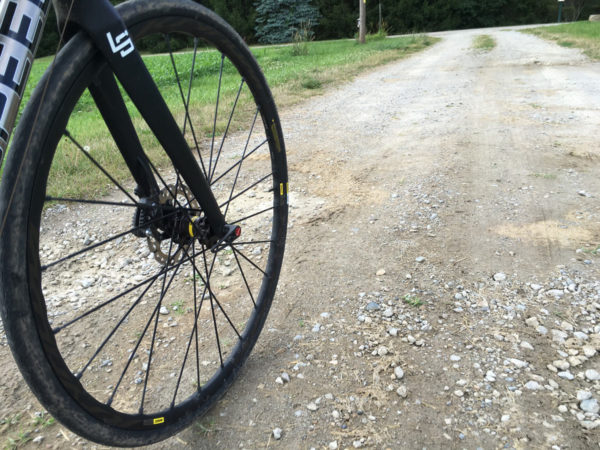 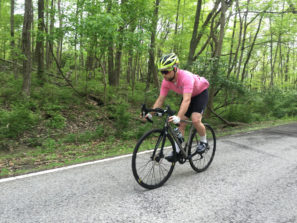 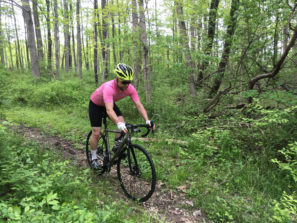 This is where the bike’s split personality comes into play. On one hand, the stout frame, disc brakes, and big tires beg for you to take that dirt or gravel path. Charge those potholes. Just generally ride like you and your tires don’t give AF. But then the geometry has you looking forward to kitting up and tackling your local fast group ride. Sure, it may not be the lightest bike for the climbs, but you’ll make your attack on the descent. On one hand it’s a fast road bike. On the other it’s a quick all road bike. Versatility is a good thing. 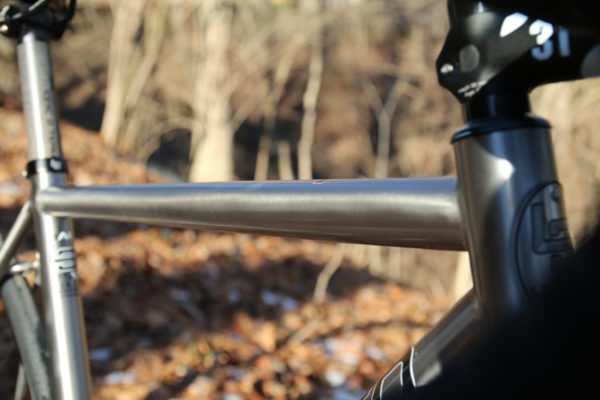 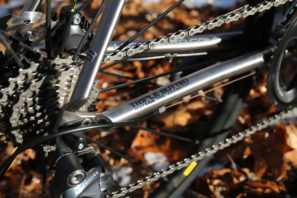 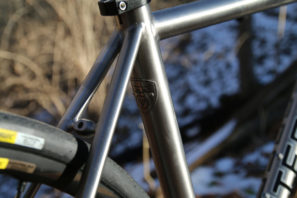 Titanium may have a sweet ride, but don’t think the T3 won’t be stiff or efficient. Thanks to what seems to be mostly the swaging and butting process used by Litespeed, the T3 is surprisingly stiff from the head tube to the bottom bracket. It’s stiff enough that this is the type of bike that really rewards you for riding fast with a lot of power over rough roads. In general it’s usually better to power over the rough stuff, and it’s no different here. The rear end transmits bigger impacts directly through the seat, though this is tempered by surprisingly flexible seat stays which Litespeed claims help soften the ride. When I say surprisingly flexible, I mean physical surprise as Chris from Litespeed pushed down on the stays to show how much they actually flex – quite a bit. The T3 does possess a lot of that magic Ti feel, but with more modern performance mixed in for efficiency’s sake. 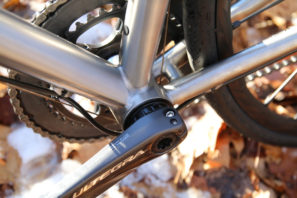 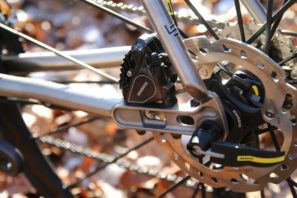 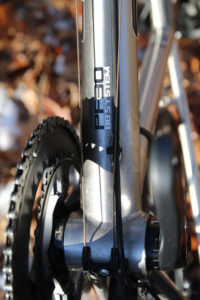 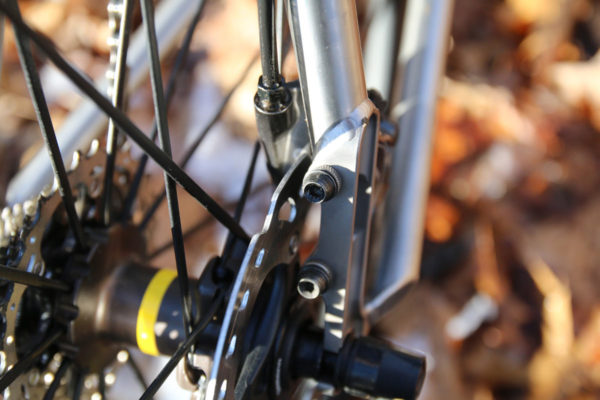 When it comes to the frame itself, Litespeed has taken a modern approach to fitment with a PF30 bottom bracket, a 44mm head tube, Flat Mount disc brakes, and Di2 compatibility. In spite of the fact that this bike had clearly been well ridden before I took possession of it, the bottom bracket was silent throughout the whole testing period which included riding in snow, sleet, mud, and a lot of rain. The one area that did exhibit some noise was the seat tube and seat post. After getting particularly dirty, it seems like grit may have entered into the seat tube causing a creak if you came down on the saddle just right. After pulling the post, cleaning the seat tube, and adding fresh carbon prep, the noise was eliminated. 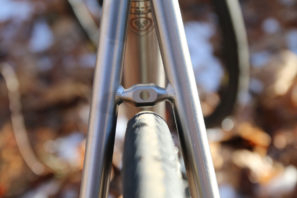 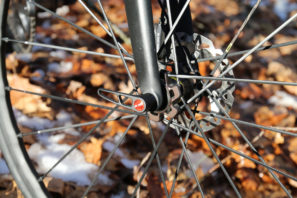 While the fork uses a 12x100mm thru axle, the rear of the bike still uses a 135mm quick release dropout. Neither the fork or the frame feature fender mounts, though both fender and rack mounts can be added to the frame for an additional charge. One interesting feature is the addition of a rear caliper brake mount which can be combined with the included axle spacer kit to make the bike 130mm QR, rim brake compatible. The Mavic 28mm tire and rim combo shown here looks to be the maximum tire size the frame will allow with the limitation at the chain stay. 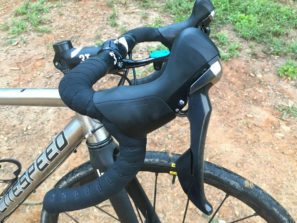 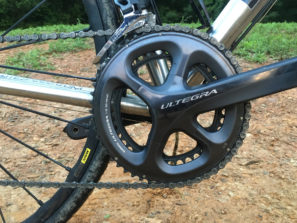 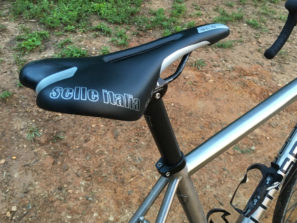 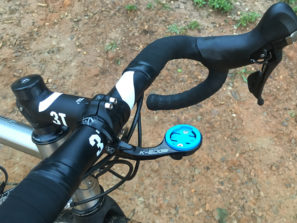 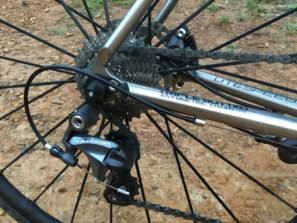 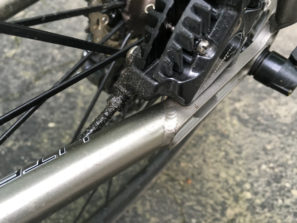 Our test bike was fitted with a Shimano Ultegra mechanical shift/hydraulic brake group which will be sold with the Mavic wheels and tires for $5,750. You can upgrade to a Shimano Ultegra Di2 hydraulic build at $6,250, while the frameset with the Litespeed carbon thru axle fork runs $3,275.

Amongst an otherwise stellar build, the one area that proved to be problematic was the rear Shimano disc brake. After a few months of use, the rear brake showed considerable leakage around the compression fitting at the caliper. Unfortunately, this is not the first time we’ve had problems with rear Shimano hydraulic brakes recently (of different natures) and seems to be made worse if the bike hangs for any period of time. When asked for comment, Shimano said it could be something as simple as a loose compression fitting, missing olive, or cross threaded fitting but it’s something they would consider a one-off issue. If this had happened with a consumer’s brake they would be directed to their local Shimano dealer to help them through the warranty process, and the problematic brake would be sent back to Japan to be examined by Shimano’s engineers.

Otherwise, the performance of the group was excellent and I especially liked the smaller profile of the Shimano hydraulic hoods to those of the competition. The rest of the build was mostly 3T which not only looks great, but was also quite comfortable along with the Selle Italia saddle. 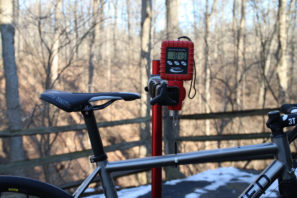 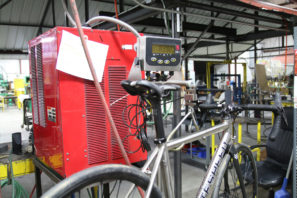 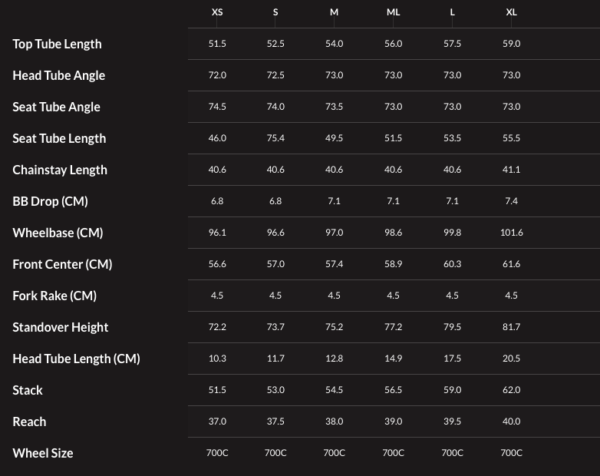 As pictured, the small T3 Disc came in at 18.43 lbs on my scale or 8.39 kg on the likely more accurate scale at Litespeed’s new HQ. Personally, at 5’8″ and with a slightly longer reach measurement, the Small frame was an excellent fit. 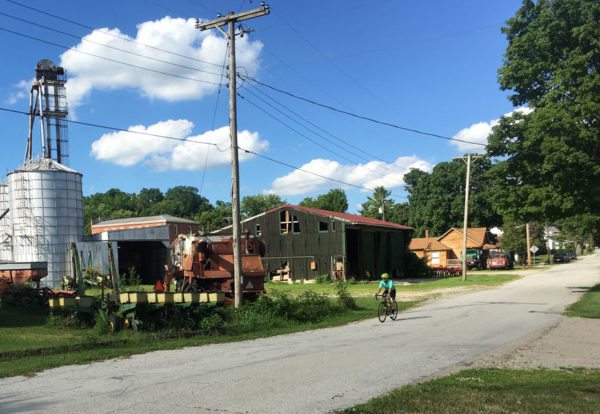 I really wasn’t sure what to expect in this review. I initially jumped on the opportunity simply because Litespeed was offering me a chance to review a road bike with hydraulic disc brakes at a time when I didn’t have full use of my left hand. The easier operation of the hydraulic lever meant that I was able to get back on a road bike much more quickly than my other rim brake equipped builds.

It wasn’t long until the review became about more than just brakes. The T3 Disc is really one of those bikes that grows on you the more you ride it. It’s not the lightest bike out there, but that didn’t seem to affect my desire to grab it when headed out for a ride over the other bikes in the stable.

Overall, the bike seems to offer an exceptional blend of versatility. There are better bikes for just road racing, or just gravel riding, but for a bike that seems comfortable in most situations, there are few that make the transition between genres seem so effortless.

Had a same issue with br-rs785, probably due to bad hose angle. A bit of ptfe tape over hose screw solved it and caliper didn’t leak in two years since then.

I expect that the next iteration of bikesdirect.com titanium bikes will have flat-mount discs and thru-axles… for about 1/3rd of of price of the Litespeed.

Their “new front entry” looks like a Oldsmobile dealer waiting room from the 70’s.

Geometry chart seems off for the Small size. Seat tube length of “75.4” (I’m assuming centimeters) doesn’t fit with the rest of the other sizes.