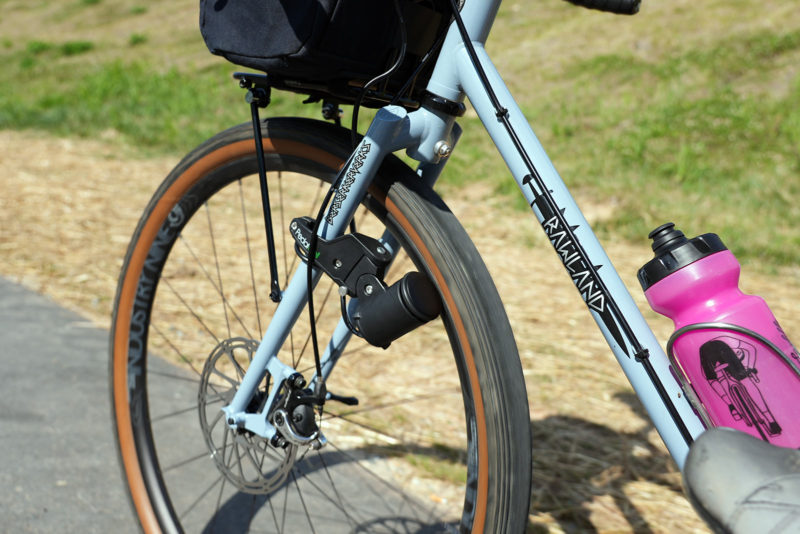 The PedalCell dynamo attaches to your fork and rolls against your rim to create electricity, turning out enough juice to charge your phone and power lights far longer than a typical hub dynamo.

We put it to the test to see how well it could top things off, and rode alongside a friend with a hub dynamo to see how it compared. Overall, it impressed, but there are a few things you should know before adding it to your bike…

Why add the PedalCell dynamo? 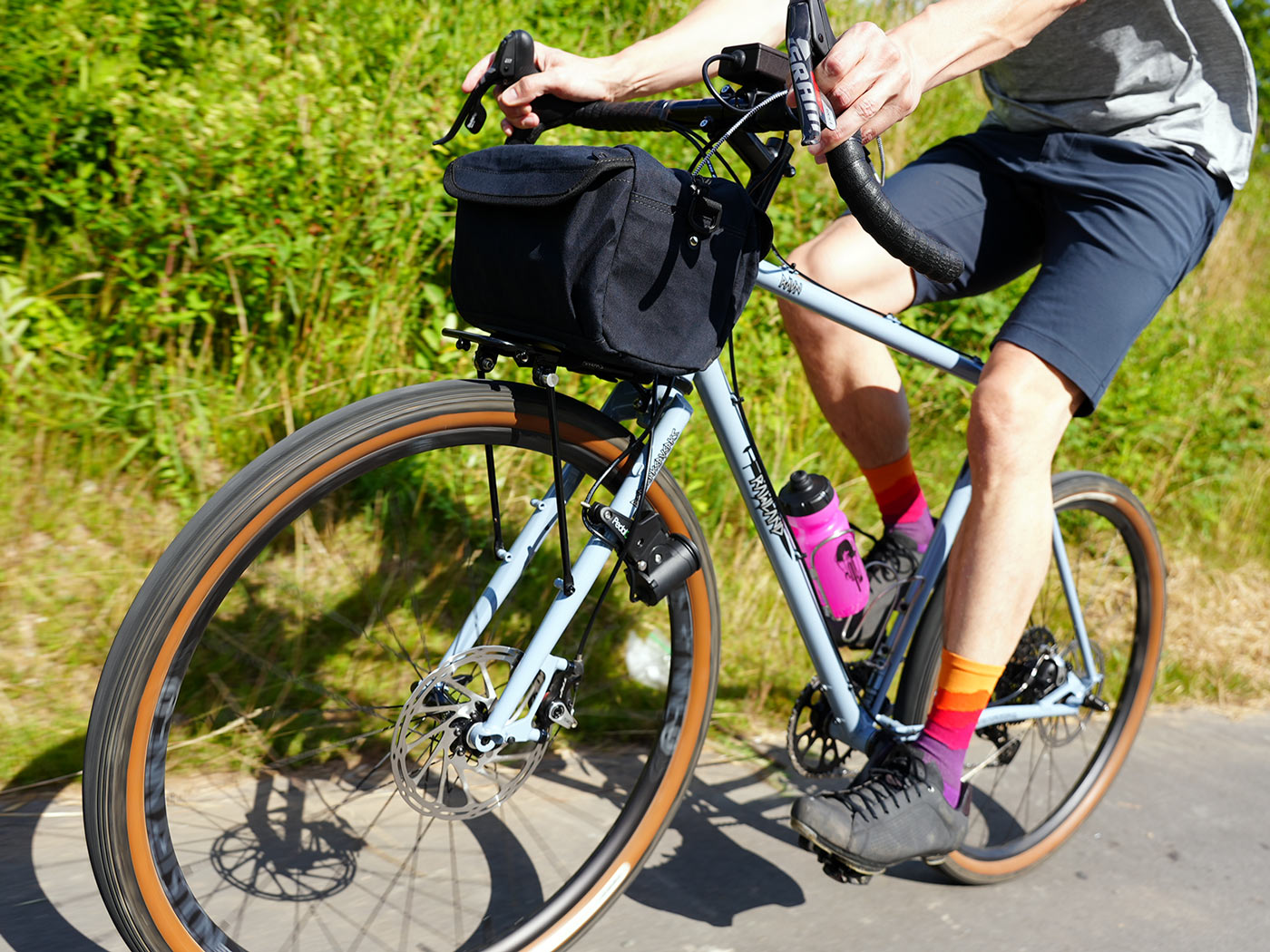 The pandemic, which disrupted the flow of goods (read: bike parts) around the world made me a more minimalist cyclist. Unable to get my hands on wheels, frames, groupsets, etc. for a mountain bike, a touring bike, a gravel bike, or a road bike, I decided to use the one complete bike I owned for a bit of everything.

Now, rides to the brewery, post-work rides, and longer weekend rides have something in common: I will, at some point, require power. Power to recharge my lights affected by the wintery temperatures (or because I’m slow and rode partly through the night). Power to charge my phone and keep Strava running. Power to charge all kinds of batteries. 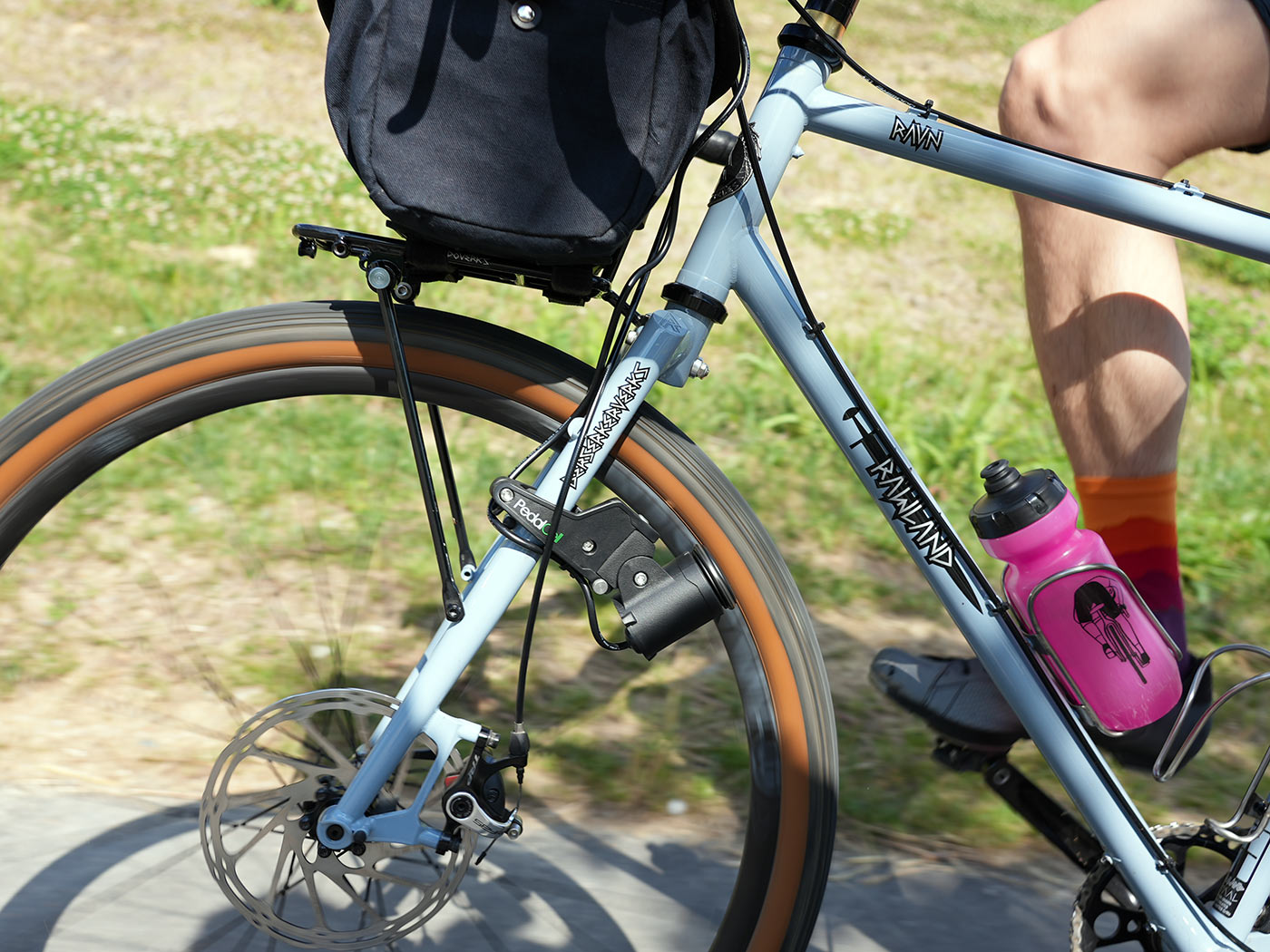 PedalCell is to your old bottle dynamo what SpaceX is to the Wright Brothers – they’re vaguely related, but one will take you much, much farther. 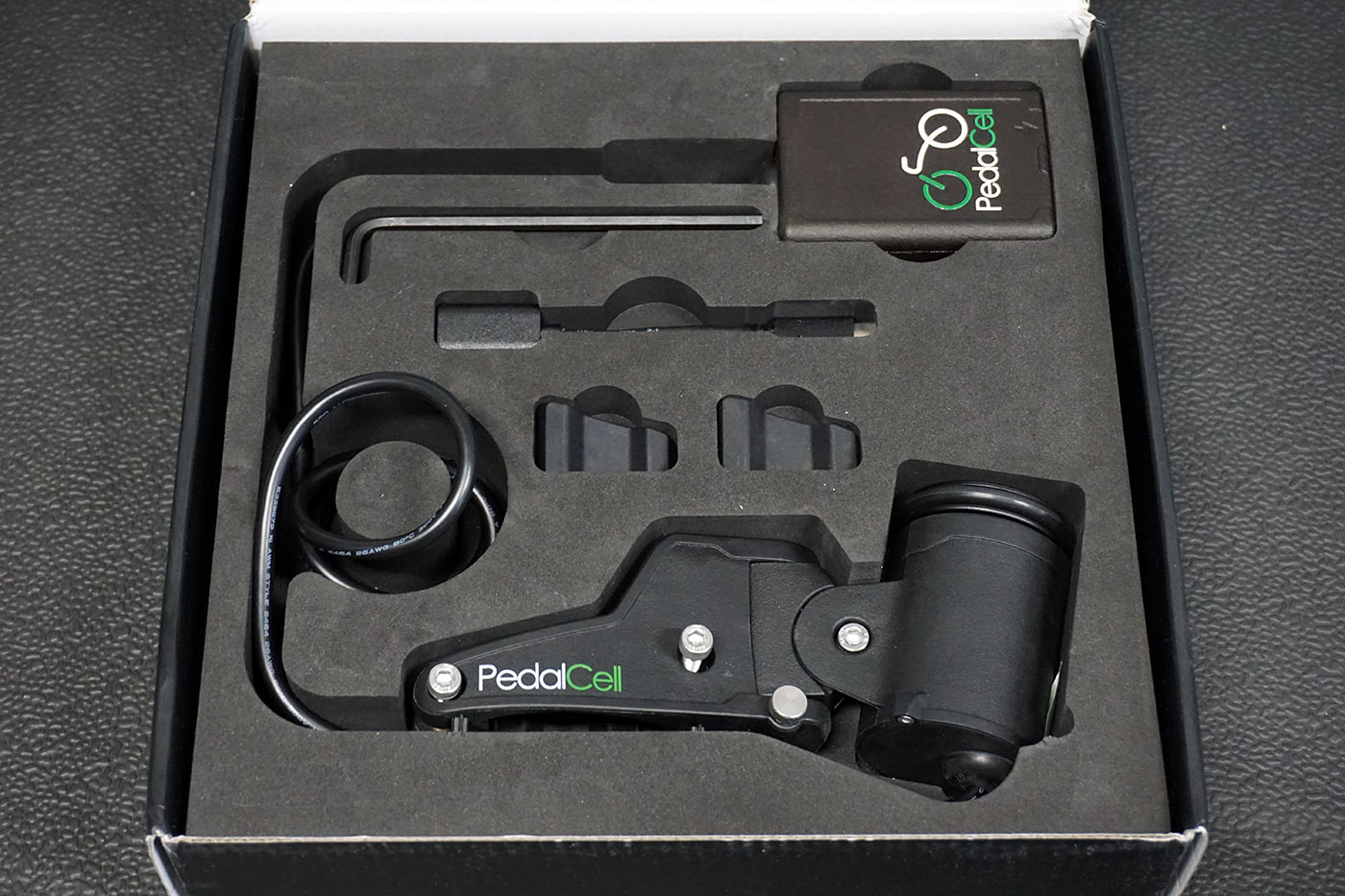 The standard PedalCell kit sells for $299 and includes everything shown and tested here. The ports on the power box are both USB-C, but it includes one USB-C-to-A adapter cable. All mounting hardware and adapters are included to make it fit most bikes right out of the box. 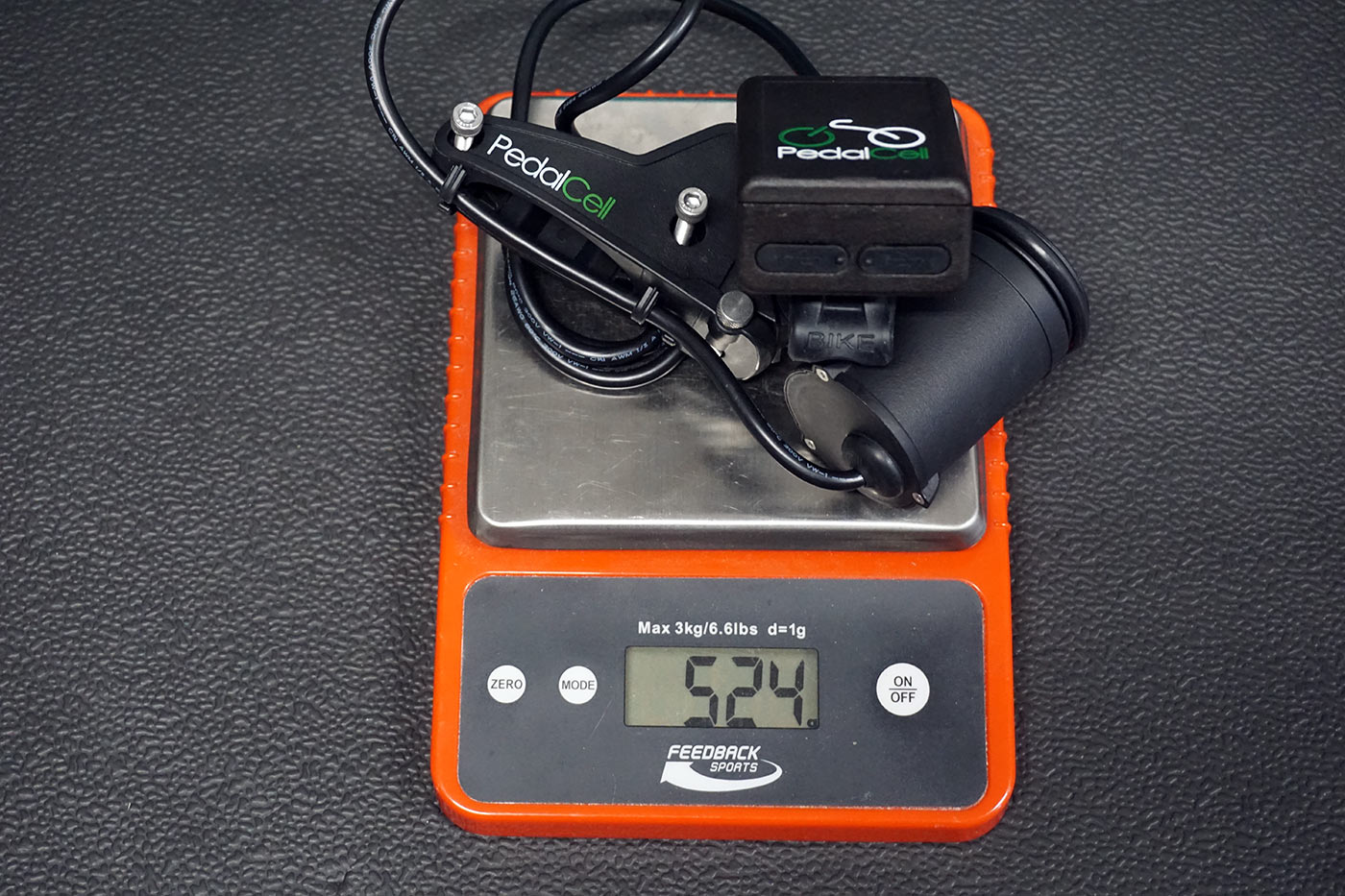 Actual weight for the full kit with everything that would go on the bike is 524g. 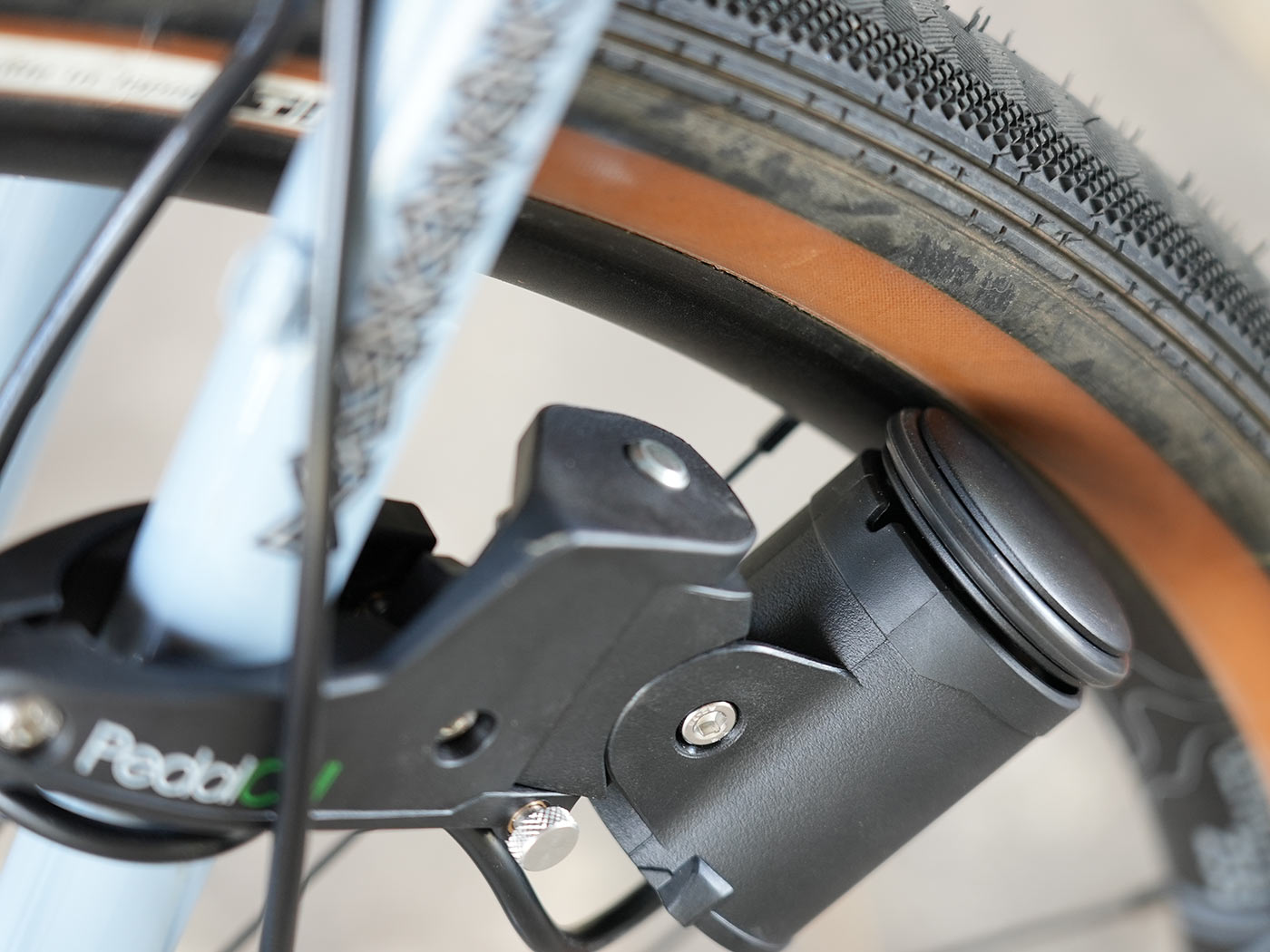 The roller’s camber isn’t adjustable, but it’s large enough to work on rounded rim profiles like these Industry Nine wheels.

The product itself is a refreshingly simple affair: a dynamo which you can clamp on your fork or your chainstay, and a box which I elected to mount on my handlebars (though the cable is long enough to allow more creative setup…or just stuff it into a top tube or handlebar bag to hide it).

Commuters, rejoice! Set-up is easy, intuitive, and took me five minutes the first time around, and maybe 1-2 minutes each time after that. The clamp comes with various size rubber adapters to ensure a perfect fit. Rough asphalt, bumpy gravel, poorly-negotiated jumps… the clamp never came loose. 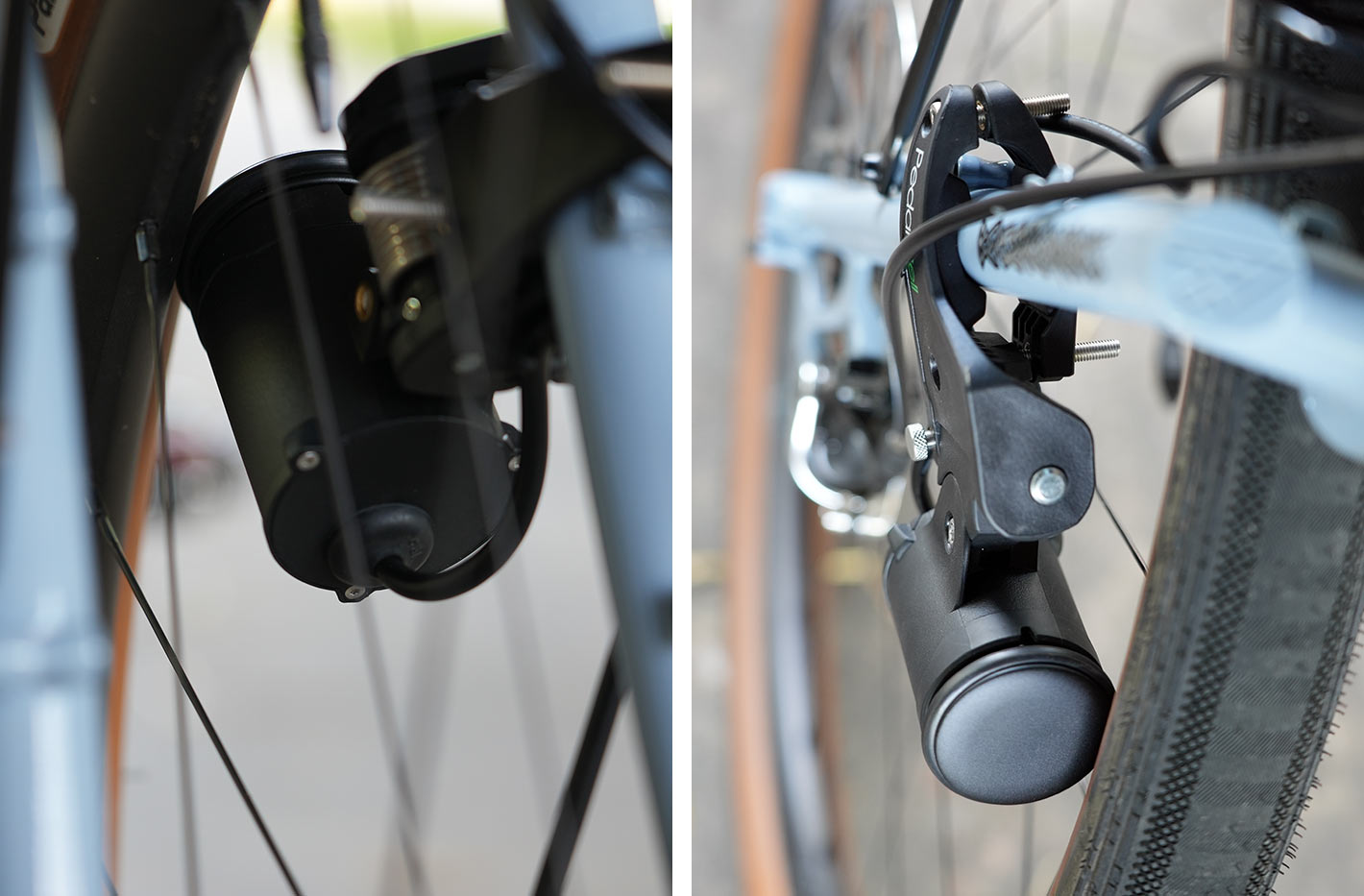 Everything here feels solid, with a reassuring, professional quality to it. Although it’s not advertised as waterproof, the system easily handled rain, mud, sleet, and splashes.

The wheel that drives the generator is surrounded by a rubber O-ring, which needs only a tiny bit of real estate on your rims (4-5 millimeters) and worked well on my very rounded disc-brake rims.

That said, they only recommend it for use on alloy rims, not on carbon rims. But, you can use it on standard suspension forks as long as it will mount on the lowers…not (obviously) on the stanchions. It won’t work on inverted leg forks, either. 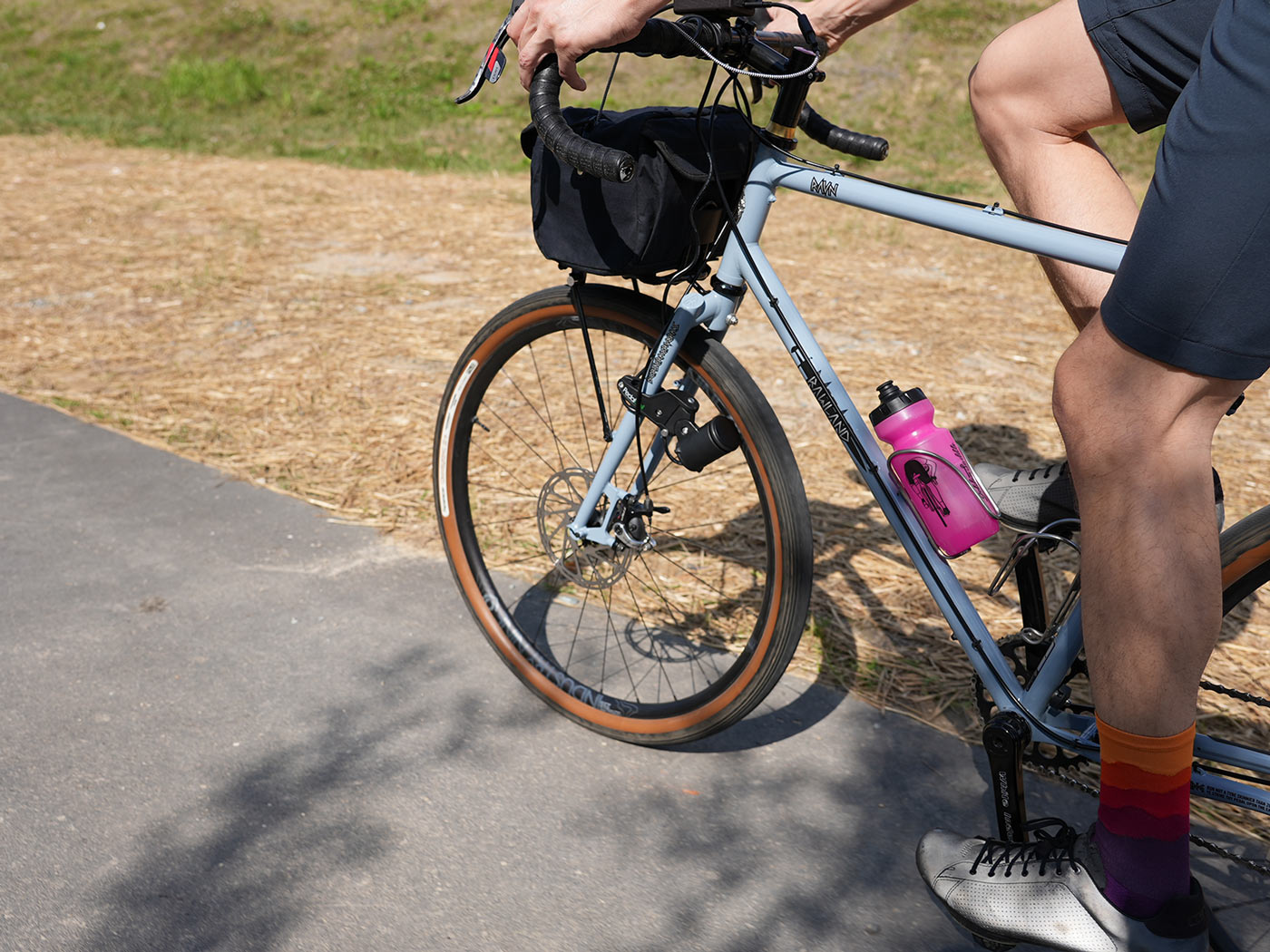 Is it pretty? That will depend on your aesthetic sensibility. Does it work? Absolutely.

The spring keeps the dynamo firmly pressed against the rim, and a slight buzz reminds you it’s on. I did notice a bit of added rolling resistance, but there’s a locking mechanism designed to keep the dynamo off the rim when you don’t need the power. 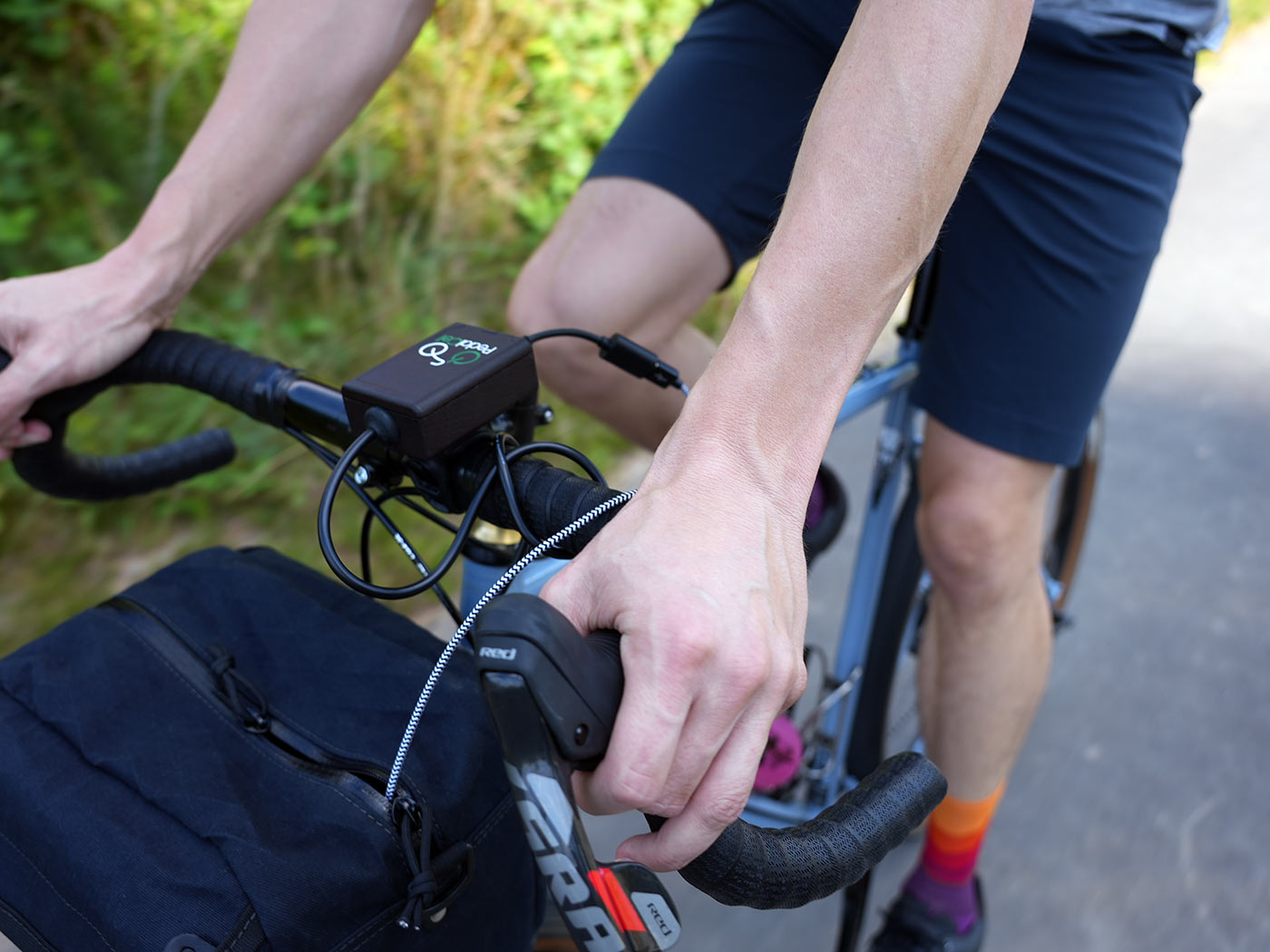 The handlebar-mounted box boasts two USB-C ports (one is a 3W “priority” port, great for your lights, the other is a high-power 12W that requires a few seconds to get going).

I am not an engineer and I am a bad mechanic, so I won’t go into the details of the supercapacitor technology. The PedalCell website can do that for you, but suffice to say any dynamo-powered light will be almost instantly fully bright as soon as you start moving, and retain power for a little while at stop lights. 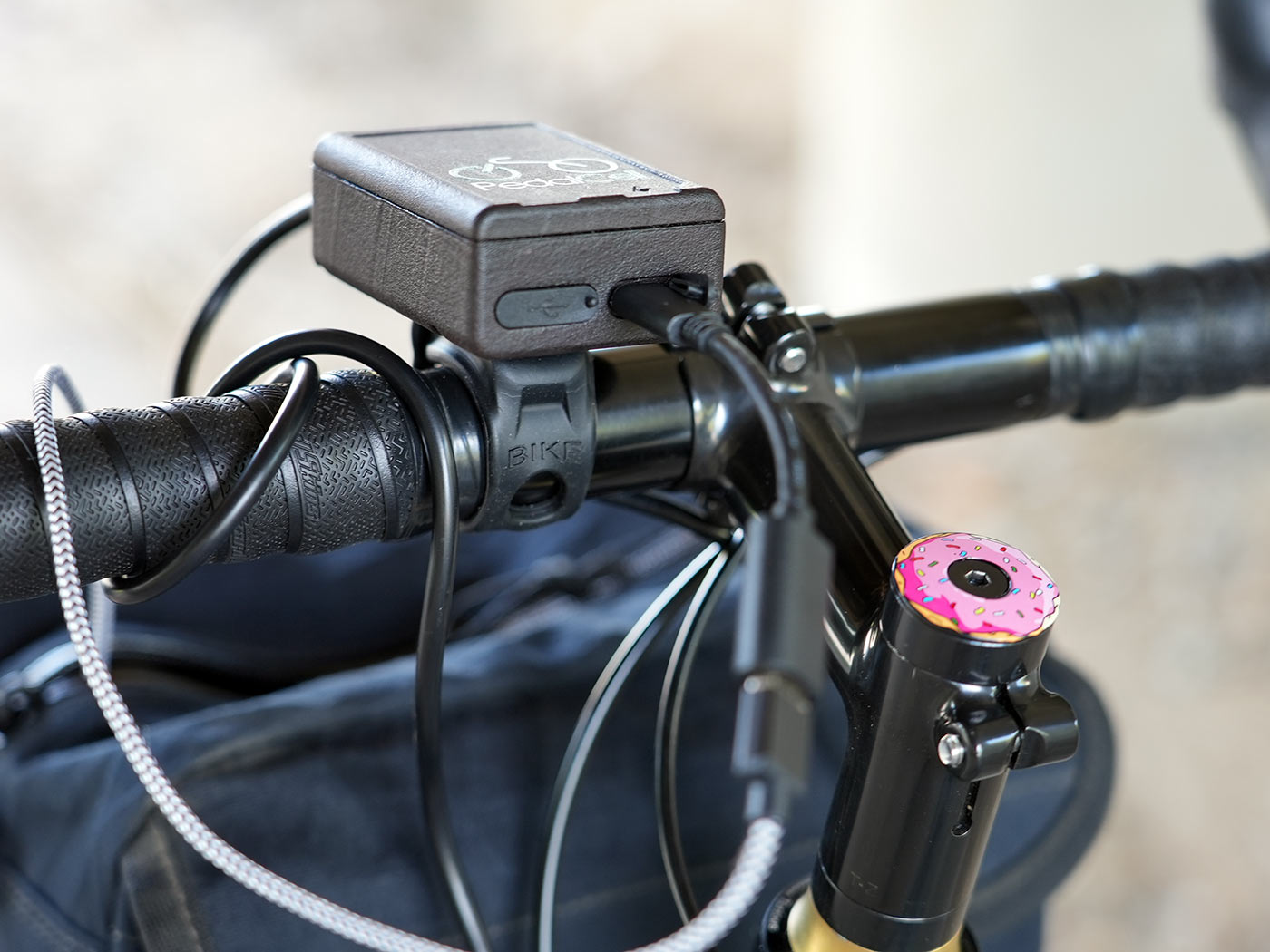 Suffice it to say that the device offers a stable, fast, and very powerful charge, no matter the temperatures, and maybe more importantly, it does so even if you’re not fast… On each outing, my cell phone was running with the screen on and charged noticeably faster than with my riding buddy’s SON [sic] dynamo hub. 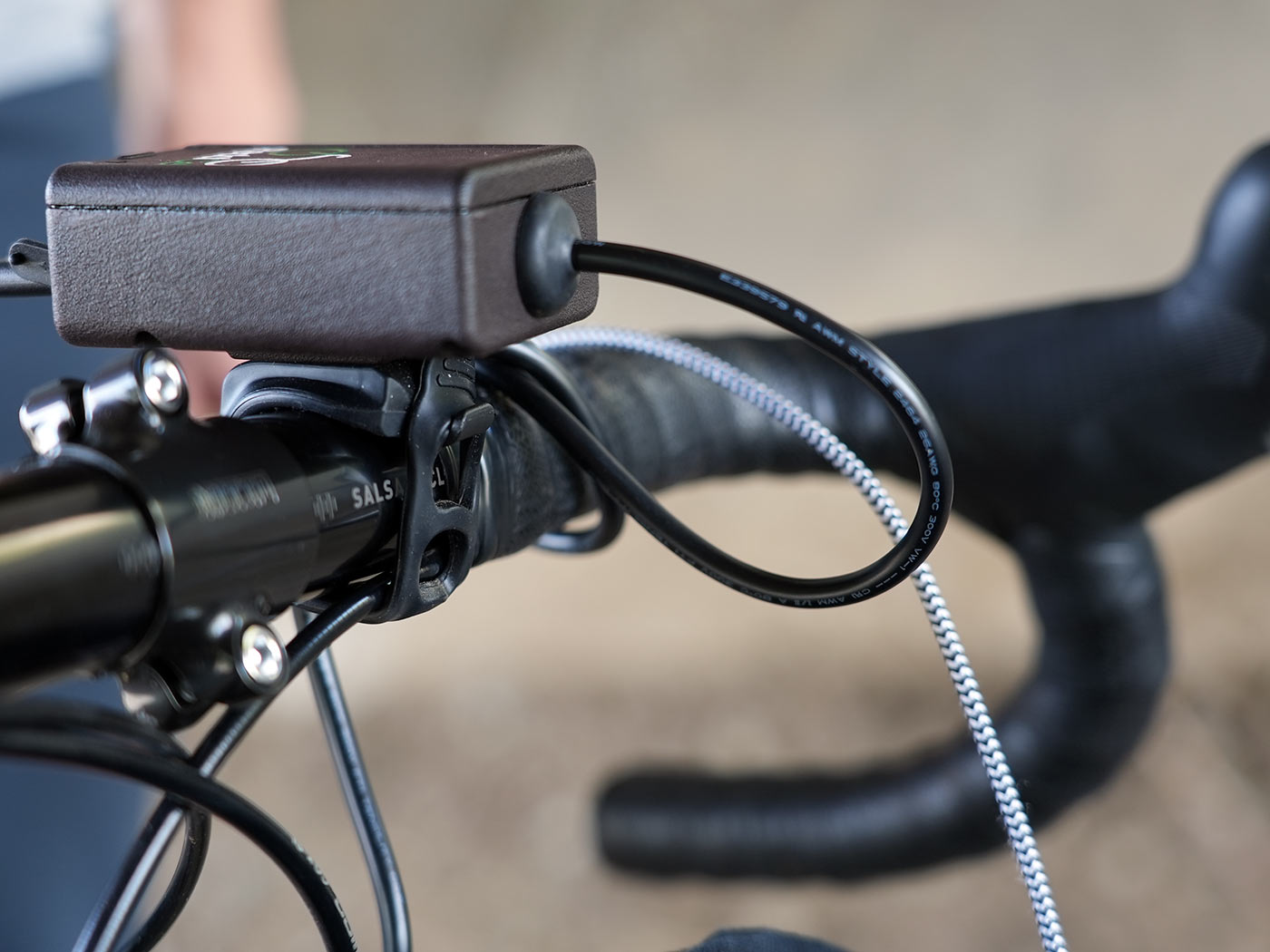 The PedalCell system also beats the portable USB power banks I used to carry (well, I can still carry them, but now they can be recharged while I ride…).

Who is it for? 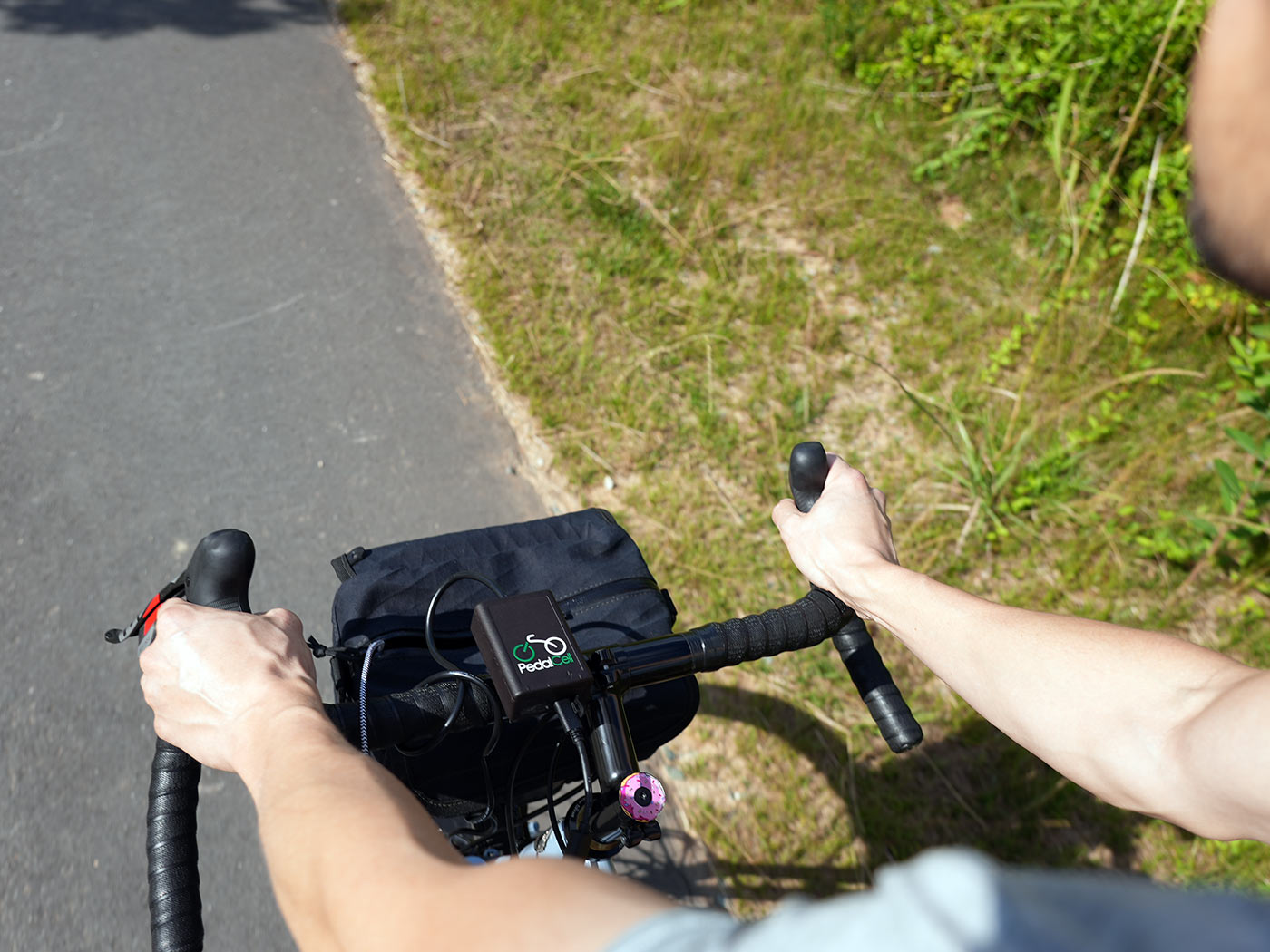 I have lusted after Dynamo hubs for a long time, and yes, they are arguably sleeker. But the price (hub, rim, build) remains prohibitive for me. If you have several bikes with different sized-wheels, you cannot simply swap your dynamo-wheelset from one bike to another. And there’s the weight penalty of pushing that heavier hub even when you don’t need it.

Unless you have internal routing, the cables are exposed, and a dynamo hub’s wires are noticeably less sturdy than the cable used by PedalCell. If you’re in the market for more power for your gadgets, supercapacitor technology is undeniably the clear winner (check out the nifty graphs on their website).

If you’re a go-fast, KOM chaser on a full carbon road bike, then you’re probably not interested in either Dynamo hubs or PedalCell anyway. But if you’re a year-round commuter, a weekend-warrior perpetually let down by USB batteries, or a long-distance bikepacker with lots of power-hungry devices, PedalCell is a versatile, long-lasting and relatively affordable solution worth your consideration.

SON (note spelling) hubs aren’t the only game in town and it’s plenty easy to lace one up for the price of that generator. You won’t change wheel size with it but it’s easy to change bikes and they’re both pretty edge cases. This does have more power to spare, though.

Once you factor in labor and all the other accessories required for a dynamo hub this is still much cheaper price wise. Dynamo specific lights are not exactly common, and the converters to safely charge USB devices aren’t cheap either. This is a complete solution, while the SON hub is just one component. Both solutions have their trade offs but this one beats dynamo hubs when it comes to price alone.

Never had issues coming up short on juice with my Son, but the power output/efficiency of this unit over my hub and other gennie hubs is pretty impressive. 7W @ 15km/h. 20%+ more efficient drag/watt. I just can’t get past the Borg-like aesthetics of the PedalCell. Nonetheless, it sure sounds like a great solution for some.

Everything old is new again.

Just from the perspective of aesthetics it’s…something else. You may want to also look at the considerably more elegant and much cheaper Velogical dynamo (http://www.velogical-engineering.com/). I tested one a few years back, and while its output is actually BELOW that of a dynohub, it’s more than adequate for most purposes, including charging. And it doesn’t look like you’ve strapped a grenade to your fork.

Any downside to running it off the rear wheel?

Runs great on the rear: tinyurl.com/yg84fts8

If PedalCell could get this awesome generator inside a hub… I could get with that.
Got my eyes on you PedalCell.

Matthias
Reply to  K-Pop is dangerous to your health

@K-Pop
Not gonna happen, unfortunately. What enables this high power output in a relatively small package is the transmission ratio between your rim and the small friction wheel. A hub dynamo can only ever turn as fast as your wheel does so it has to use much more complicated multi-pole magnets to even get near the PedalCell’s output. You can add gears to bring that angular velocity up, as tried in some spoke-driven dynamos in the 90s, but both efficiency and durability are just awful. SON & Co. get pretty close to the theoretical maximum given the constraints; PedalCell is just on a different point in the tradeoff between efficiency and reliability.

borndisturbed
Reply to  K-Pop is dangerous to your health

Now that disc breaks are common, it would be super-clean to do this as a disc-brake specifc fit.
Attach a magnet-ring to the disc rotor spider (like an ABS wheelspeed ring), and mount the stator non-contact right next to it, held in place by a bracket that replaces the disc caliper adapter.