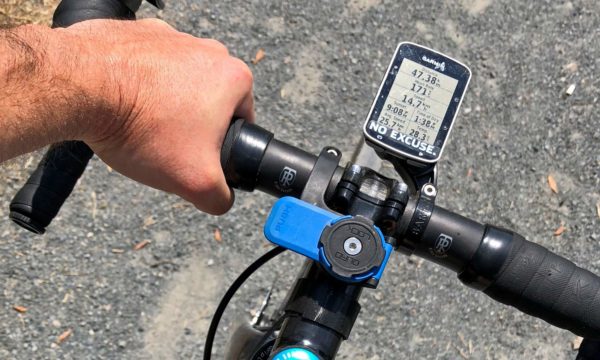 Let me first preface this with the fact that, as much as we are connected to our smartphones every minute of the day, riding without electronics can be a freeing experience. And I wholly recommend that every cyclist should ditch their screens every once in a while to remember why riding bikes is so much fun. But at the same time, I know we live in a world where rides didn’t happen if they aren’t on Strava and Instagramming ride pics can be how we stay in touch with friends near & far. I like to (and often need to) take photos on many of my rides, and the Quad Lock iPhone X case and a couple of styles of mounts are the simplest way for me to keep my camera secure & close at hand. 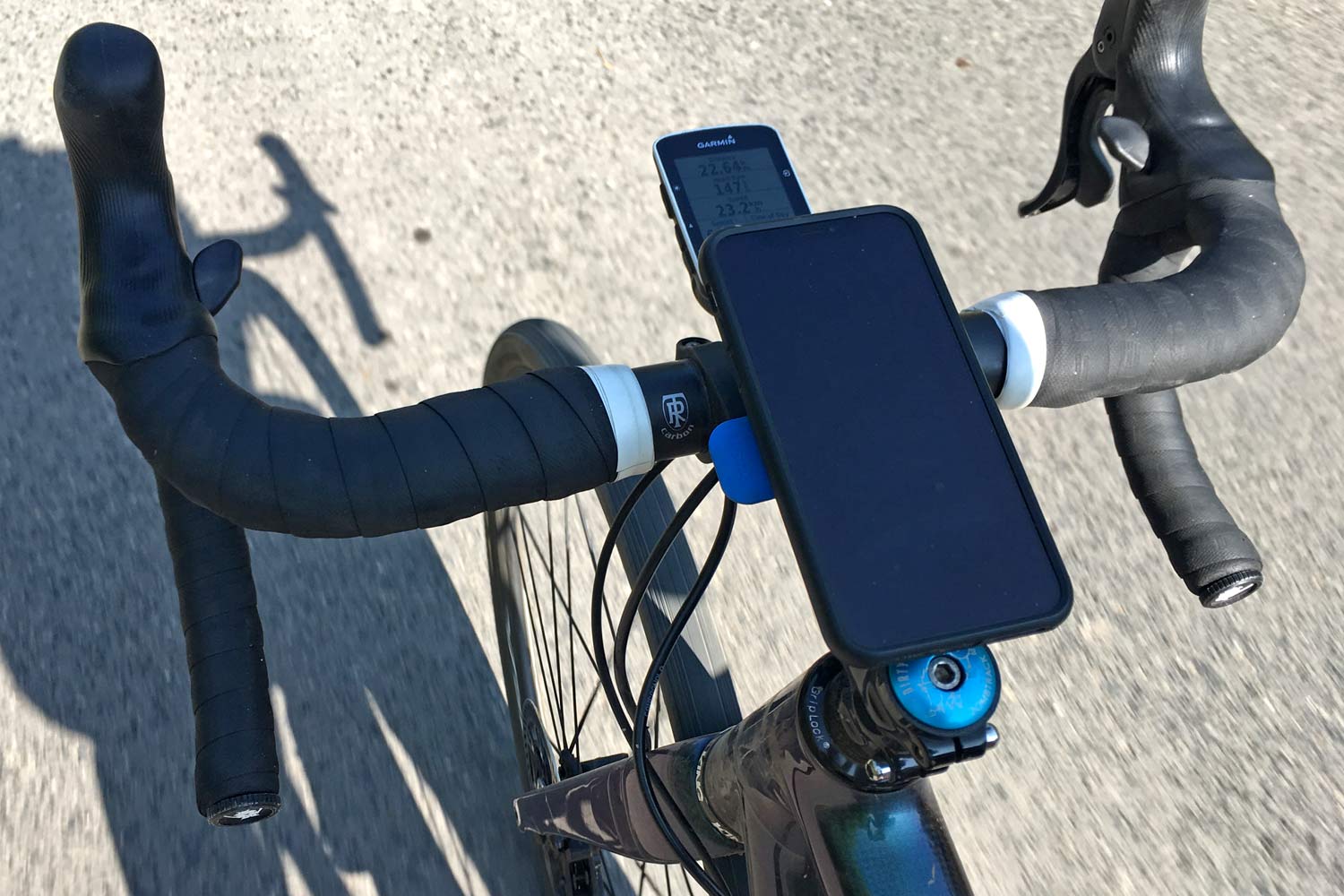 The Quad Lock Bike Kit is a two part bundle that lets you pick a case based on your type of smartphone and then pairs it with a basic handlebar mount, $70 / 70€ for my phone. My case itself for the iPhone X is another two part affair, consisting of a hard plastic TPU fitted phone case with the female Quad Lock interface on the back, but also offers an extra, soft silicone cover that slips over the entire phone+hard case to provide waterproofing over the screen, rear camera & side openings called the Poncho (available for another 25€). The whole setup offers varying levels of coverage based on your need, and promises to attach your phone securely to your handlebar, and protect it both from the elements and from small impacts. 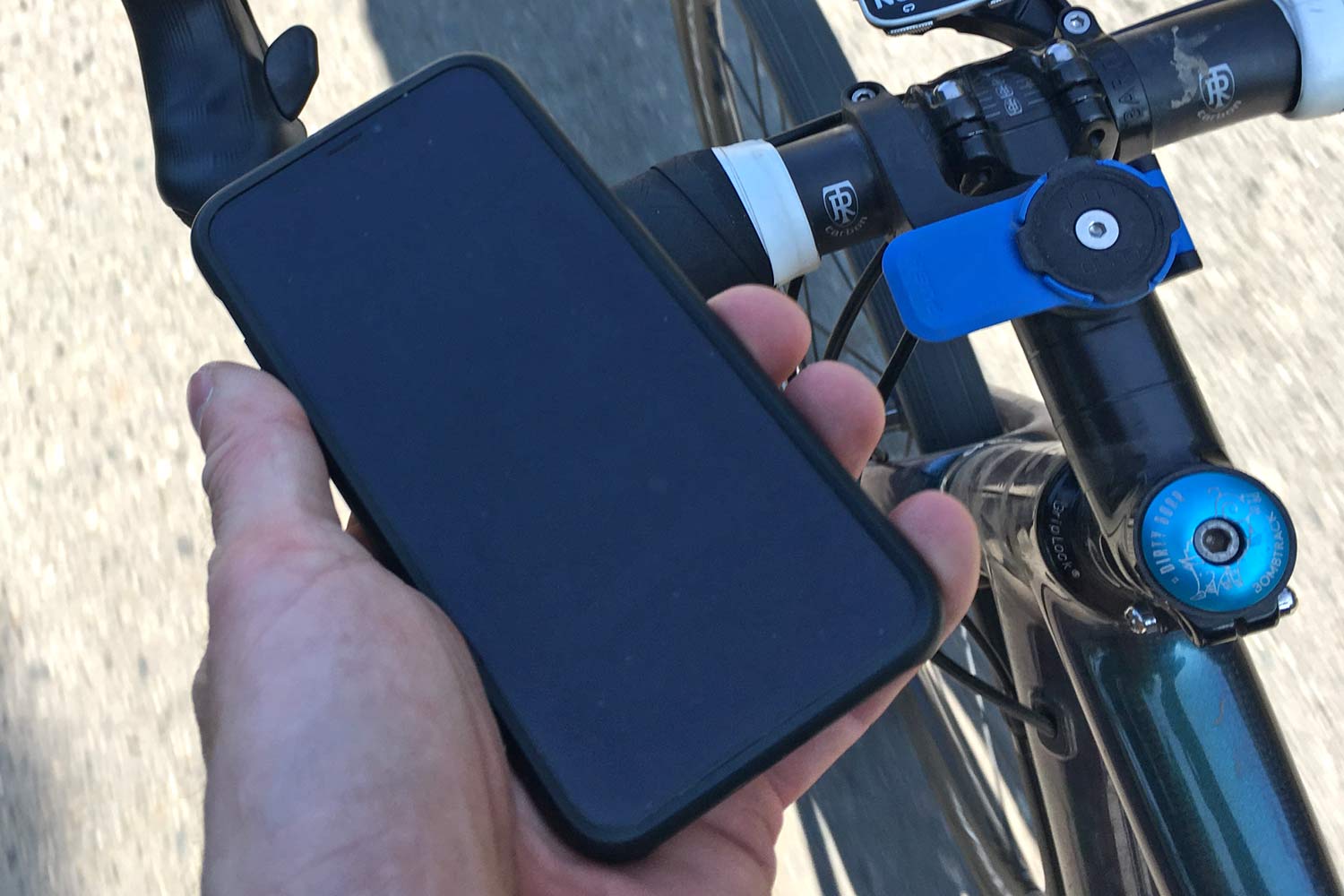 What makes the Quad Lock case work is the snug fit of the case and the mount integrated into its back. That means if you really want to benefit from using the case, you’ll probably want to use it both on and off the bike. 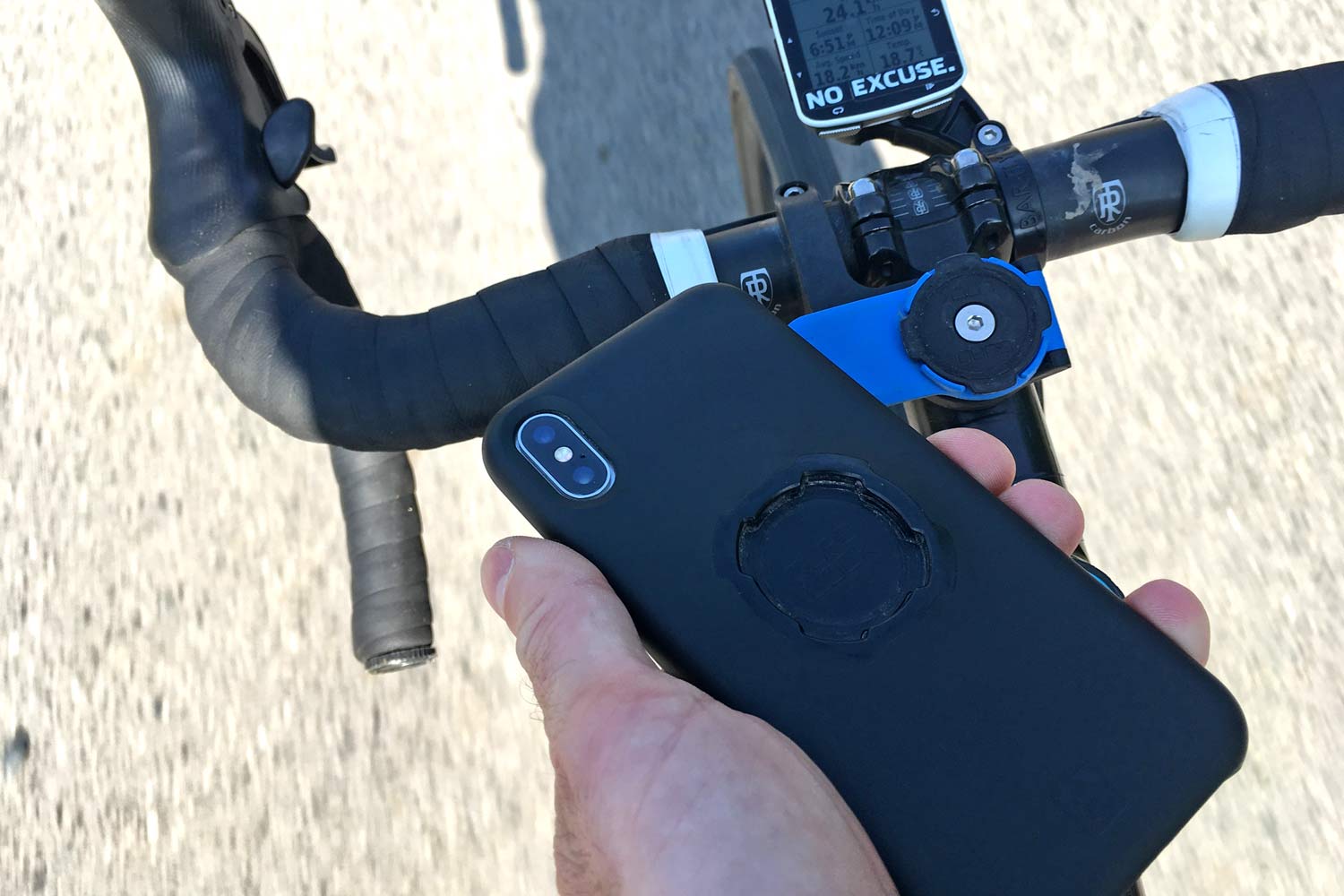 As the owner of an expensive smartphone who spends a good bit of time out of doors, I’ve accepted that my shiny phone will spend most of its life protected by a case. I typically prefer a thin case, like Apple’s own leather case that doesn’t add much bulk while protecting from routine use and the occasional drop. 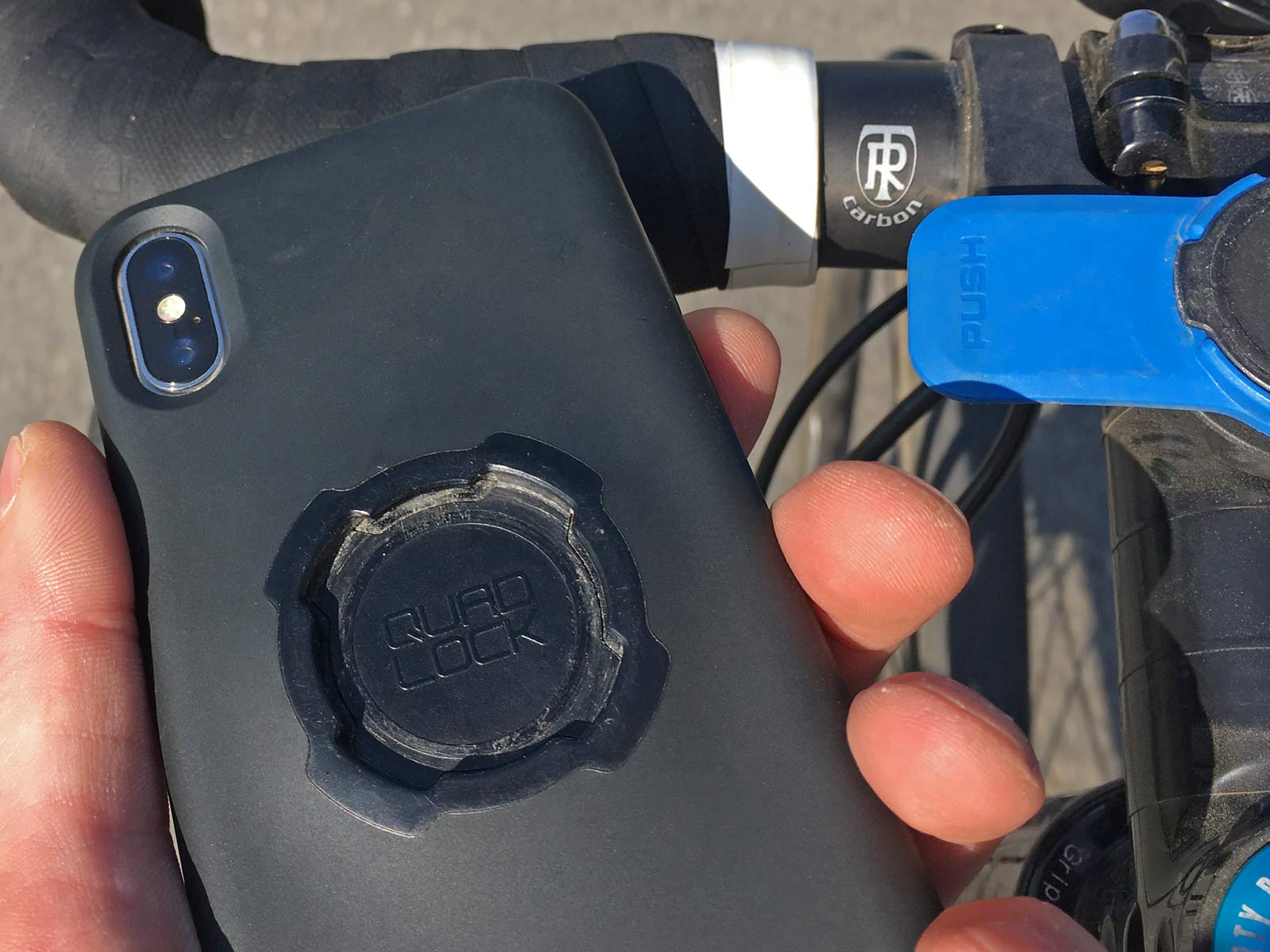 Switching to the Quad Lock case wasn’t a big deal at first as it tapers to feel quite thin at the edges while incorporating the mount in the middle of the back. My biggest problem was that the matte finish of the hard plastic case was much more slippery than a natural leather case (or something thicker with mixed materials). In fact, in the first week or two of using the Quad Lock case, I actually dropper my iPhone several times when it simply slipped from my hand during everyday use. Luckily for me it never really landed on the screen so suffered no damage. Since then I have gotten used to the semi-slick finish, adjusting how tightly I grip my phone, with no accidental drops in many months.

You might ask why I didn’t use it with the full silicone cover? Well, I felt the soft cover would only really be necessary in really lousy weather, and day-to-day it was just too bulky, making it a pain to get my phone in and out of my pocket. Plus, my version of the iPhone is effectively waterproof, and I have ridden with it mounted to the bar in quite heavy rain without issue. 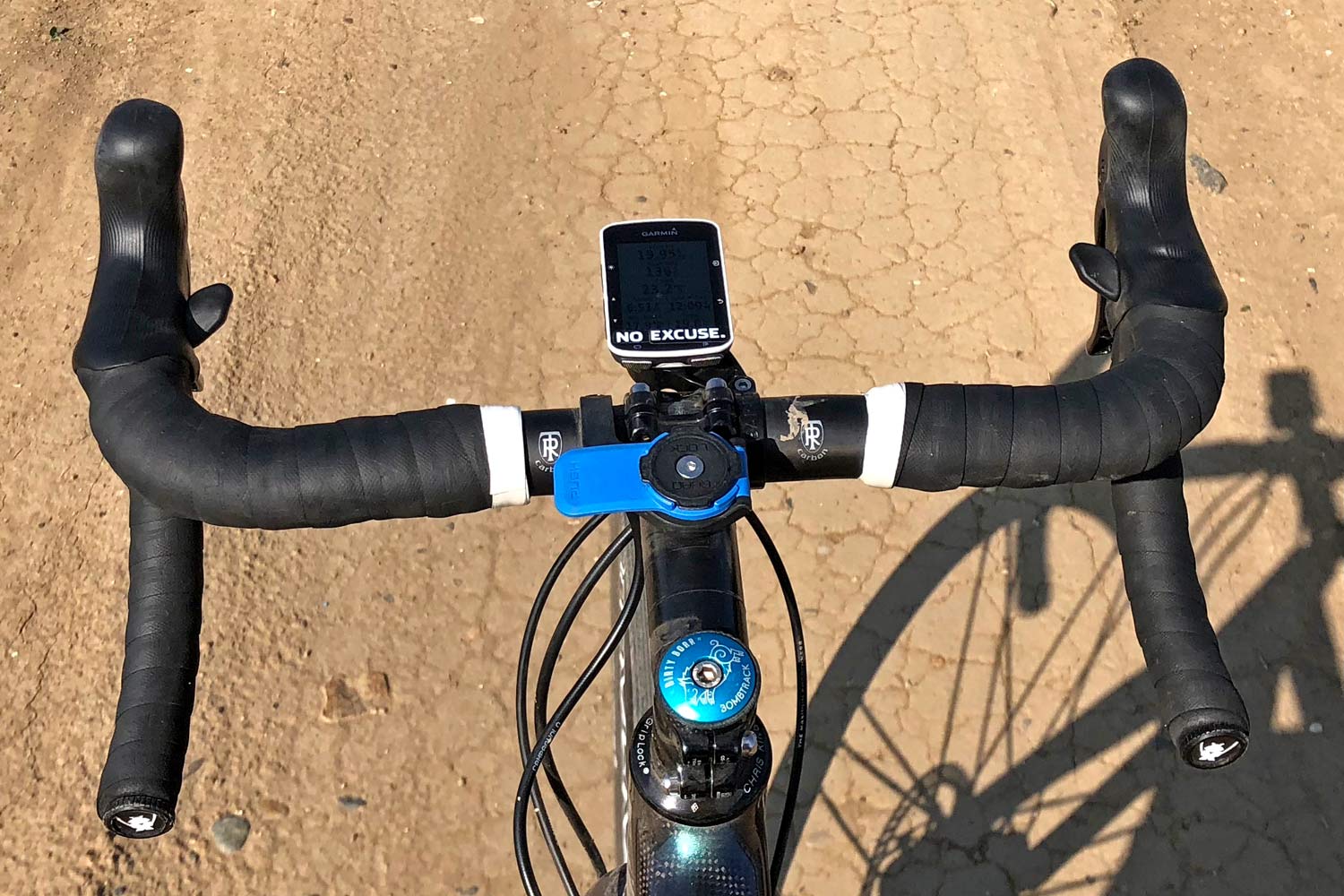 Quad Lock essentially has two styles of handlebar mounts for cyclists (a third alloy Pro option debuted a couple of weeks back) and I have used both. The easiest to use is the 40€ reinforced nylon Out Front Mount with a 31.8mm bar clamp that sits above the bar, and includes a large (signature) blue release lever. 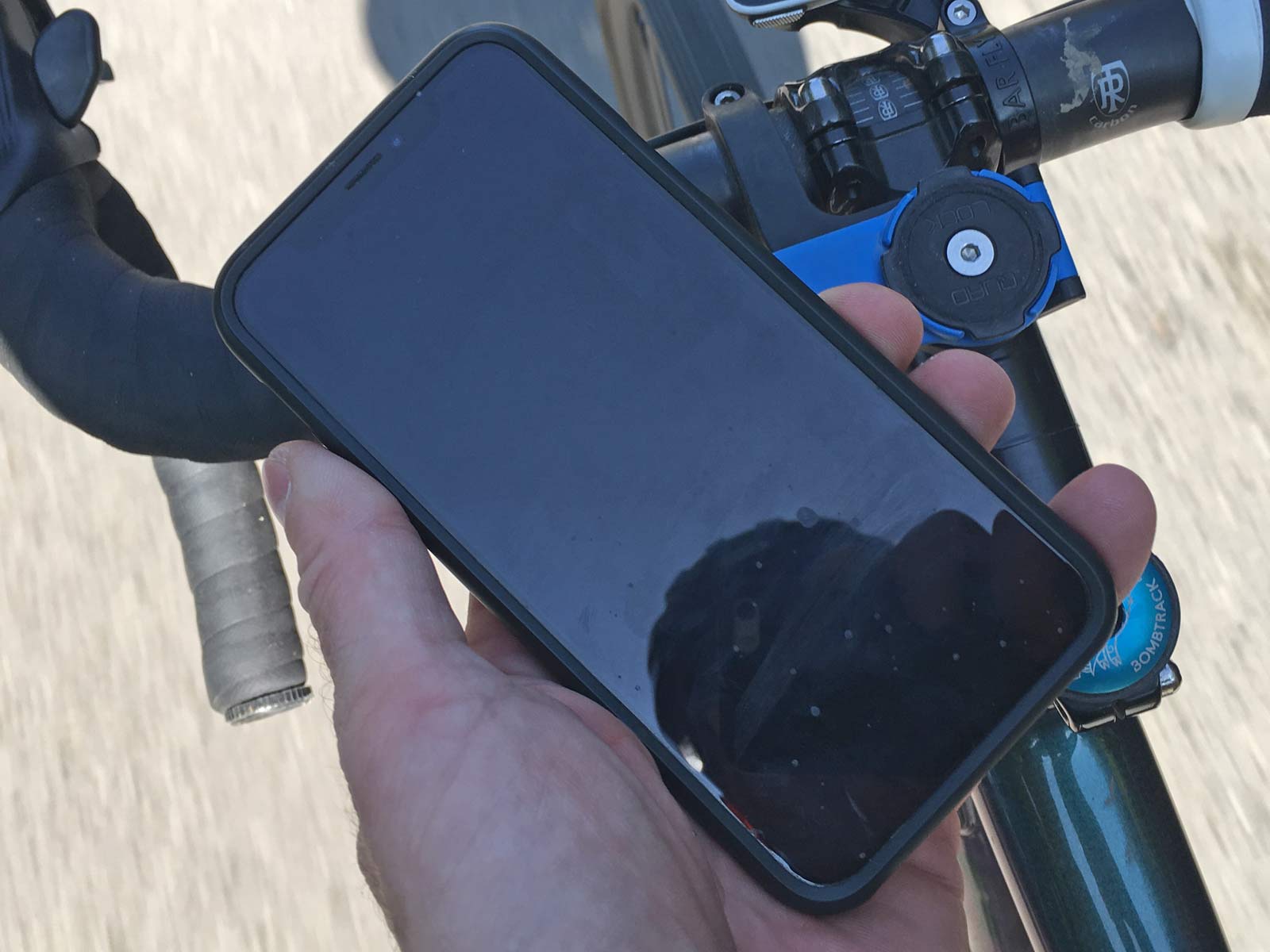 Sitting that high above the bar isn’t the most aero solution, but allows even large smartphones to be used either out in front of the handlebar, or reversed and overtop the stem. I mostly keep the Bike Mount in the reverse position, as I often use the Quad Lock setup together with a traditional GPS computer. That way I use a GPS device for ride tracking, and can switch to the phone for detailed map reading, on-the-fly navigation, or just to take photos. The bar clamp mount is totally stable, and the large blue lever makes it easy to remove the phone one handed. 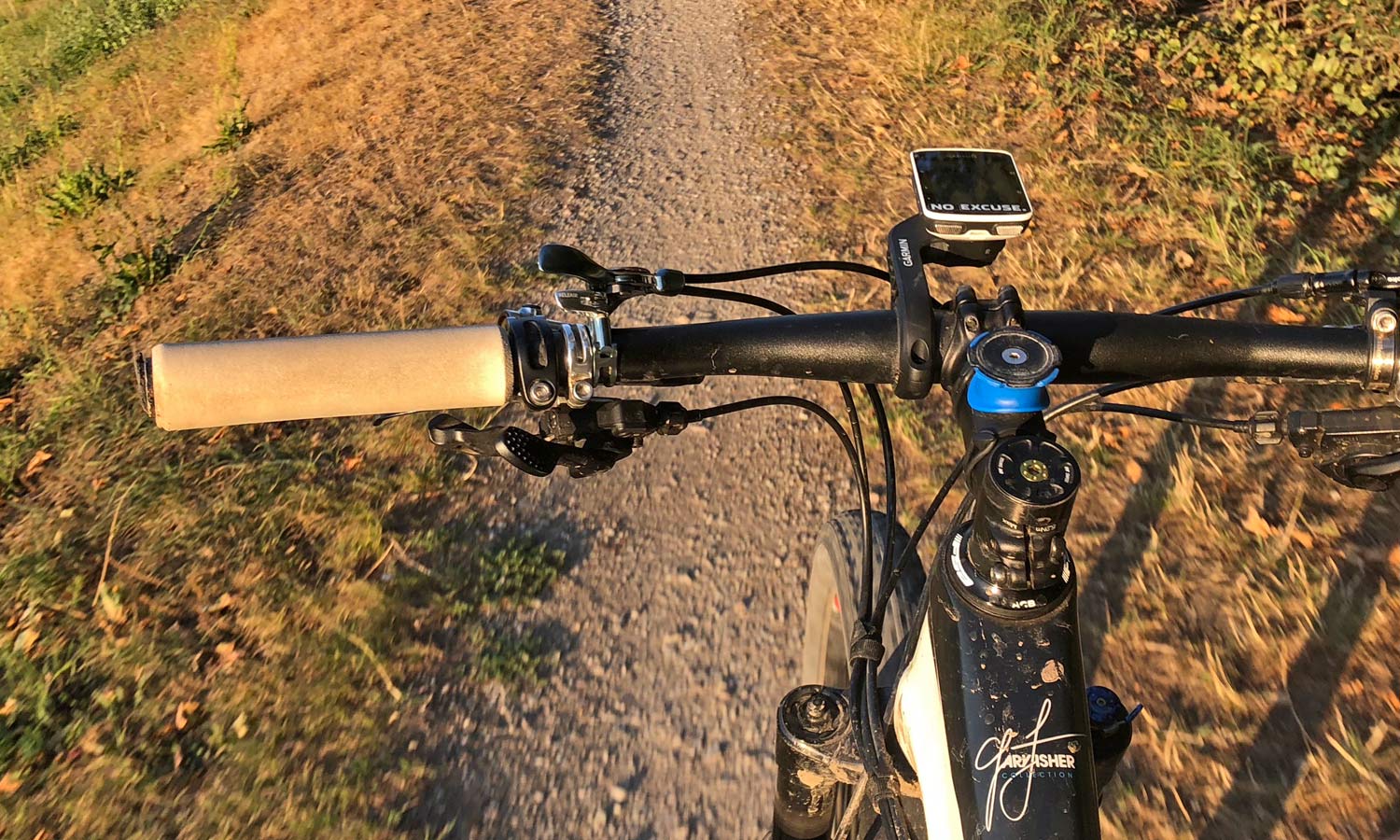 The other style is the basic Handlebar/Stem Mount that attaches to most any round tube (bar or stem) with rubber o-rings. It was included as part of my 70€ iPhone X Bike Kit, but is also available separately for 30€ if you need another. 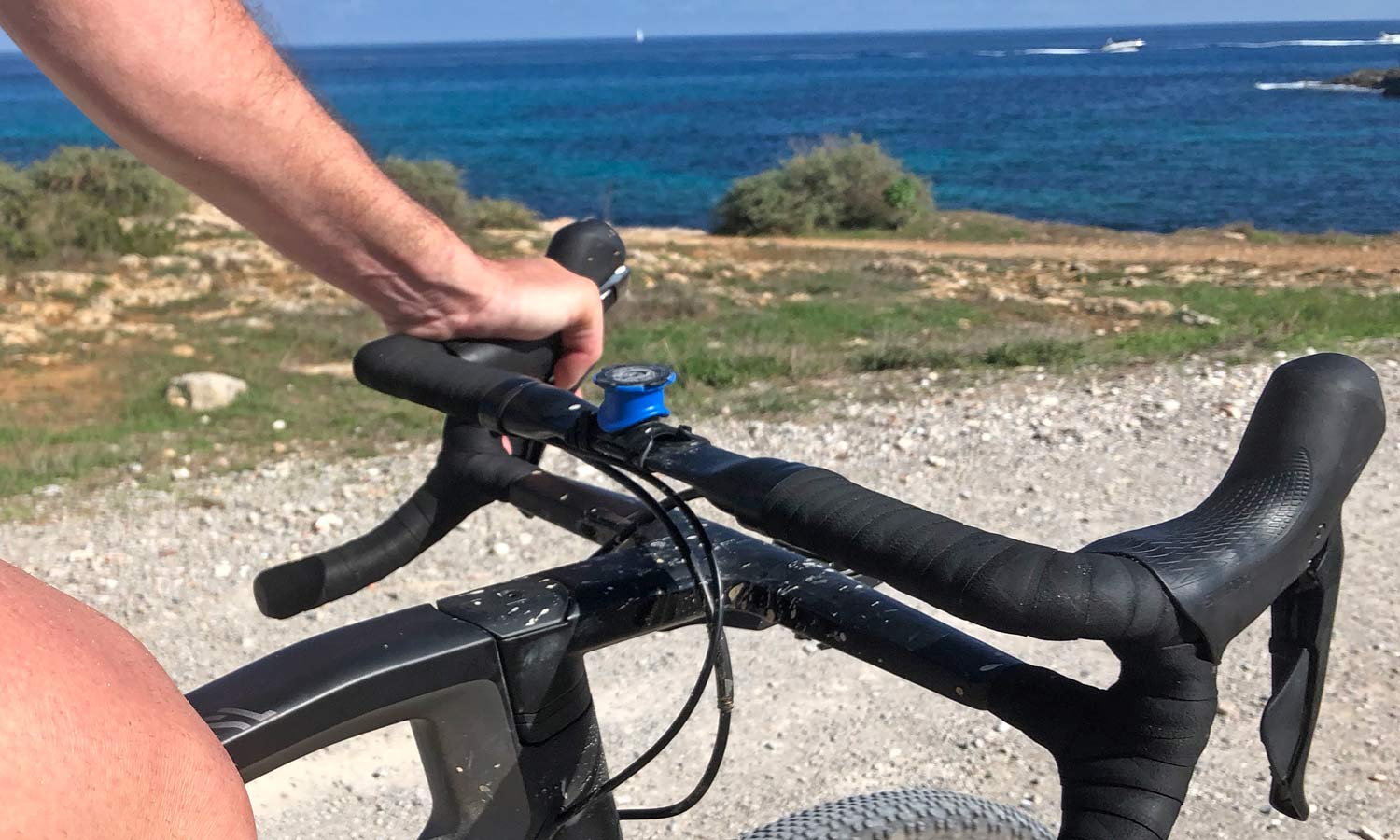 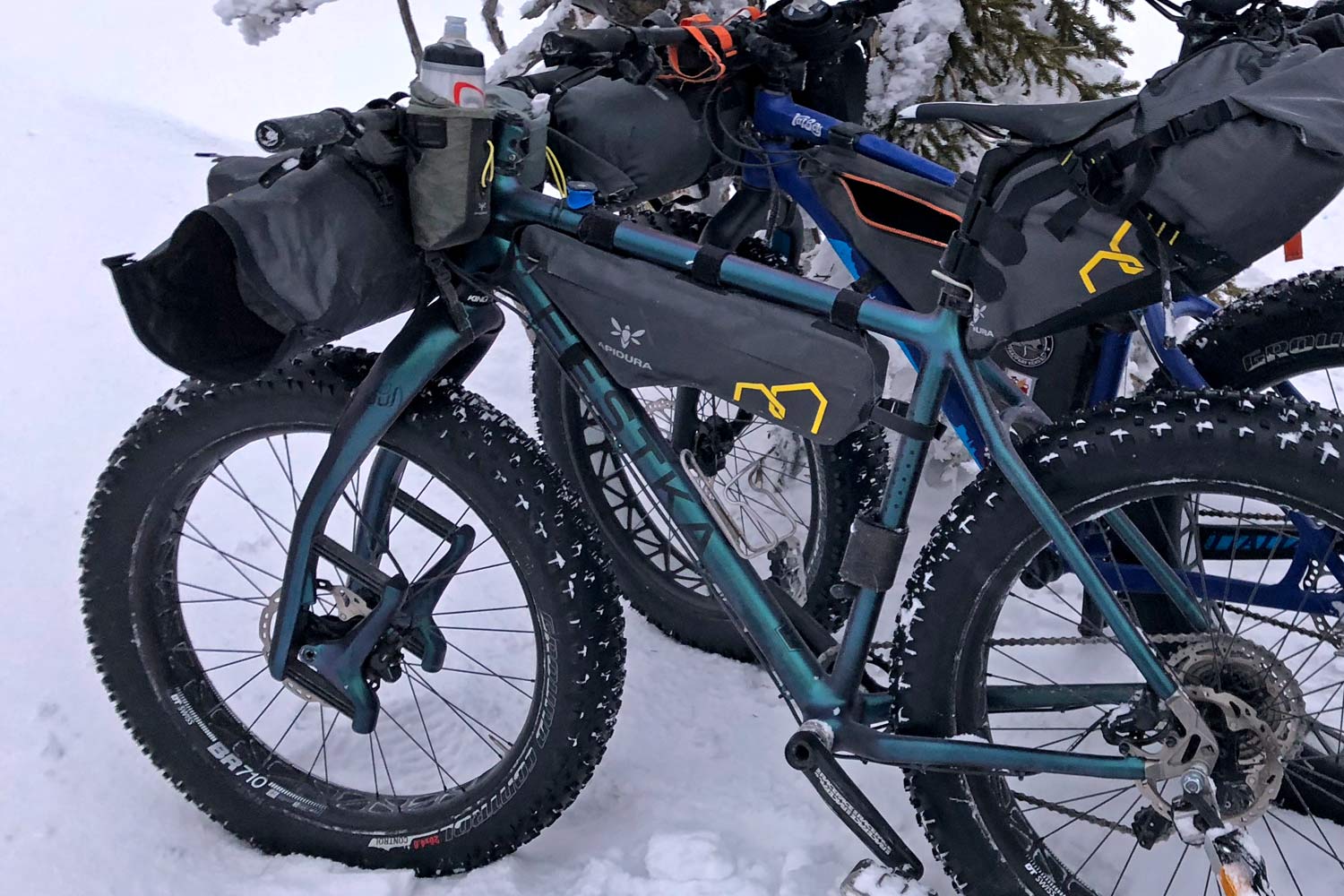 While this is a more versatile setup, it was never quite as secure. It did however work even in a pinch on the Canyon Grail CF double-decker Hover bar, as well as mounted to the toptube of a loaded down fat bike. 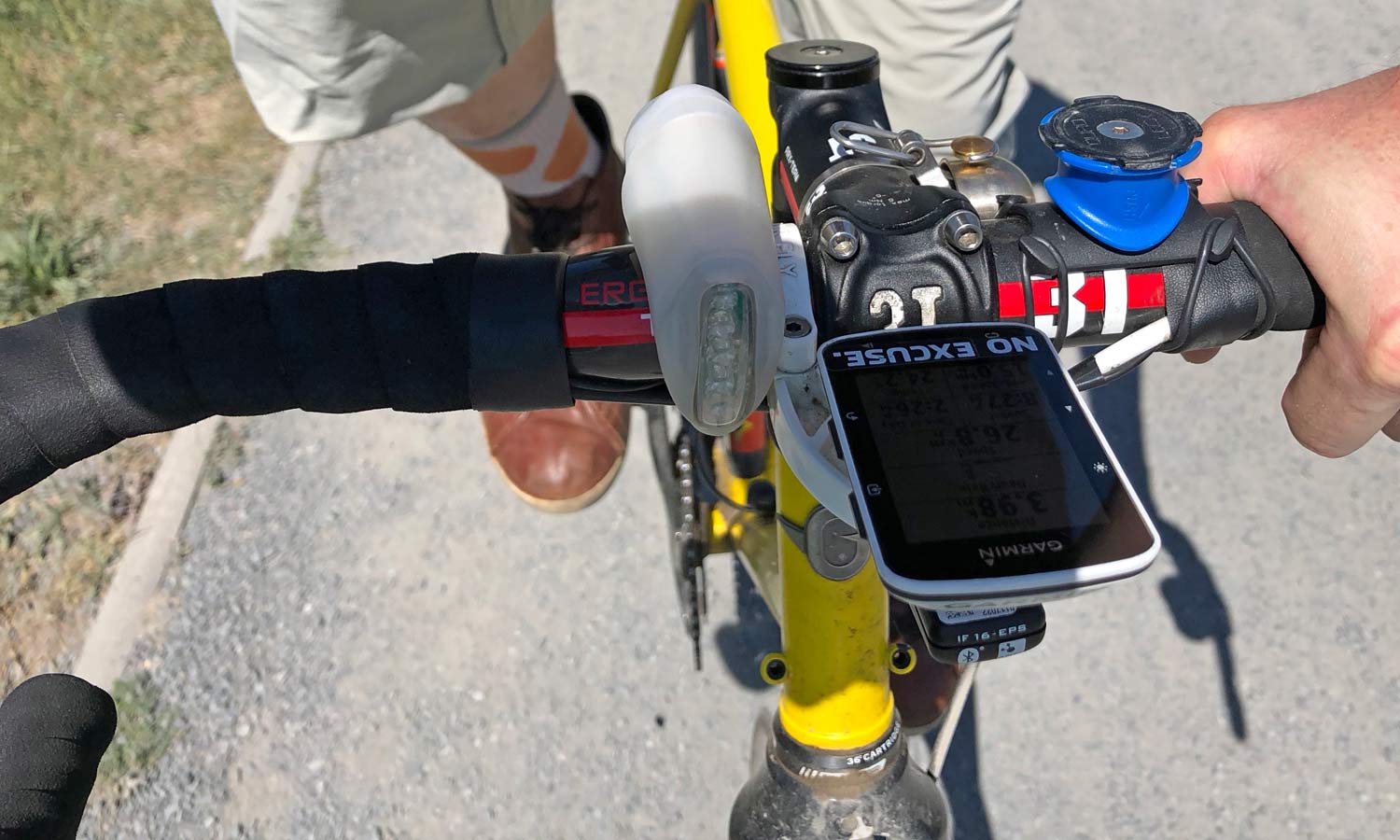 Taking the phone on and off would sometime twist the mount making it harder to reattach the phone one-handed. To operate the basic Bar Mount, you also must
simultaneously slide down the (signature) blue release/retention collar while twisting the phone 45° to release it. Sometime I was able to release it one-handed, but often times I struggled and needed one hand to push down and another to remove the phone. In theory, the Bar Mount could also be attached with plastic zip-ties for a more secure fit. But every time I tried zip-ties, they were too bulky and interfered with the operation of the blue release collar. 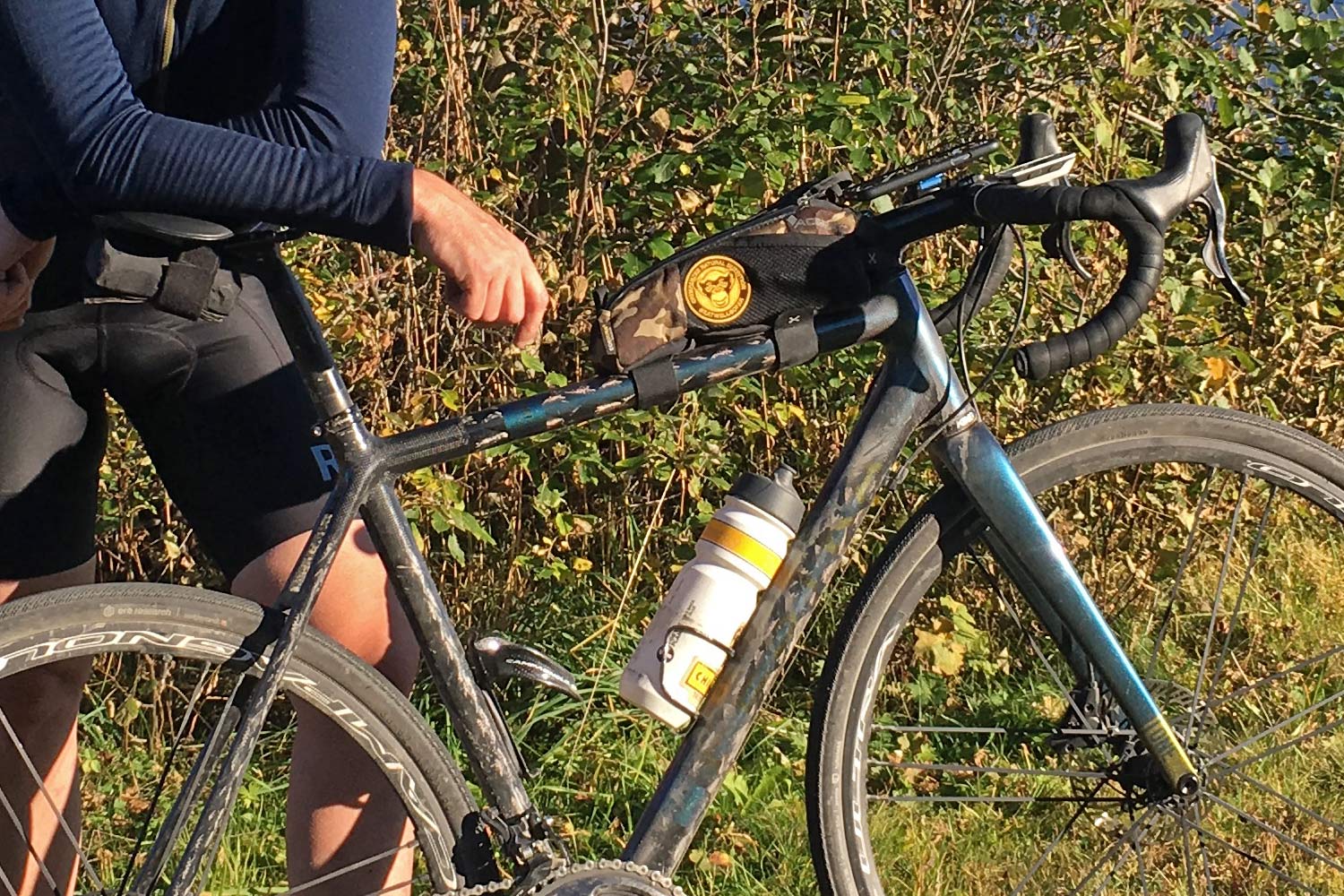 Many people will think it crazy to strap a $1000 telephone to a vulnerable position on top of your handlebar. They aren’t entirely wrong. It is a choice that I made, understanding the potential for failure. What will happen if you crash, they ask? Well, I have actually crashed a few times since I started carrying my phone on the bar. Once I dropped the XC bike in a rough rock garden using the Bar Mount, and I came up battered, bruised, even bleeding a bit. The mount rotated a bit and the phone was securely still attached and unharmed. Another time I remember washing out in a sketchy loose trail descent on a gravel bike with the Bike Mount, where I hopped off the bike to avoid going more seriously over the bars. There with the phone a bit more safely tucked away above the stem, again no problems for the phone. 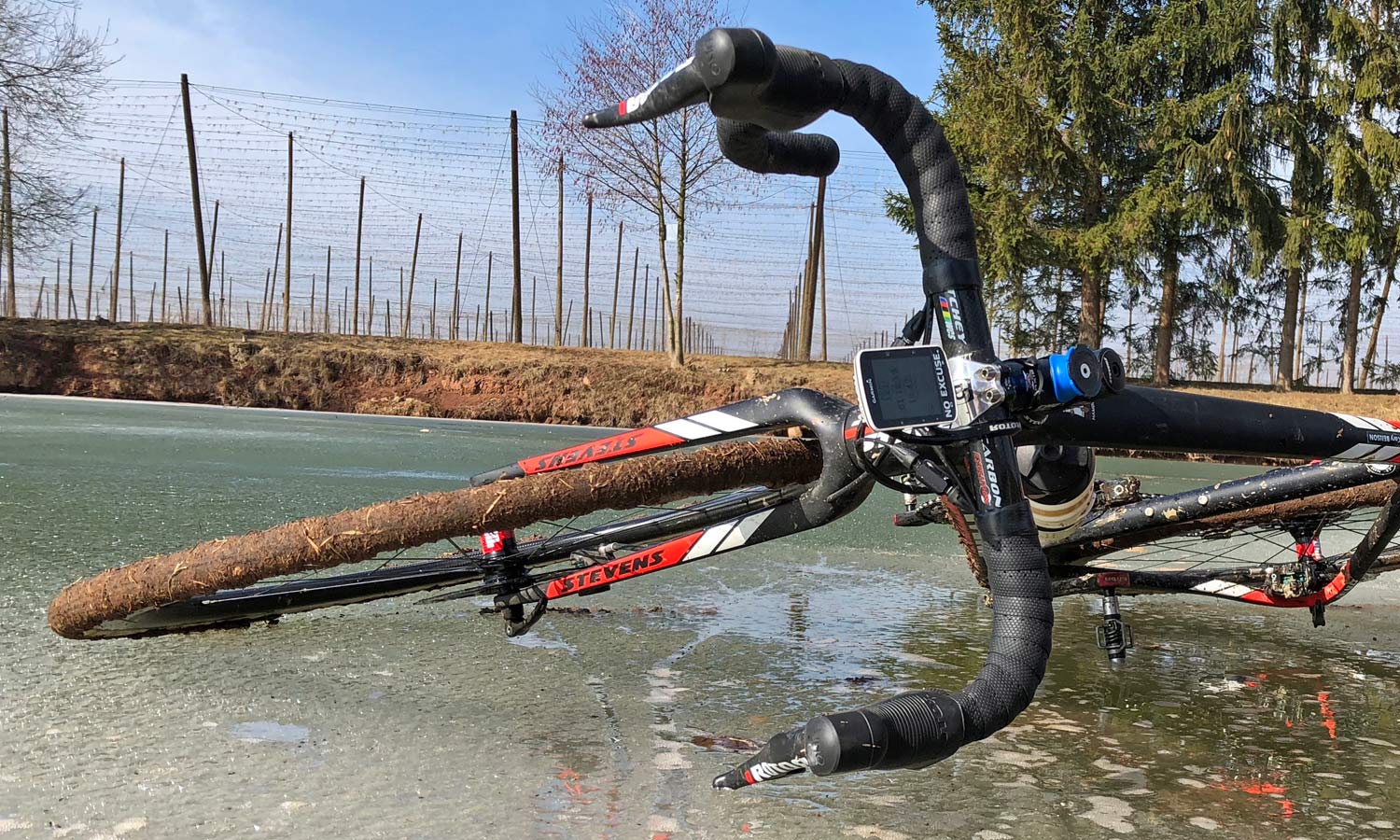 All-in, now that I have spent the better part of a year riding with my iPhone readily accessible from my stem or bar, it feels strange when I hop on a bike and stick my phone in my pocket instead. And thinking of security I feel like it is just as exposed to crash damage in my jersey pocket as on my bar (in fact, a few years back I had a phone fly out of my jersey pocket on an exceptionally bumpy fast downhill.) 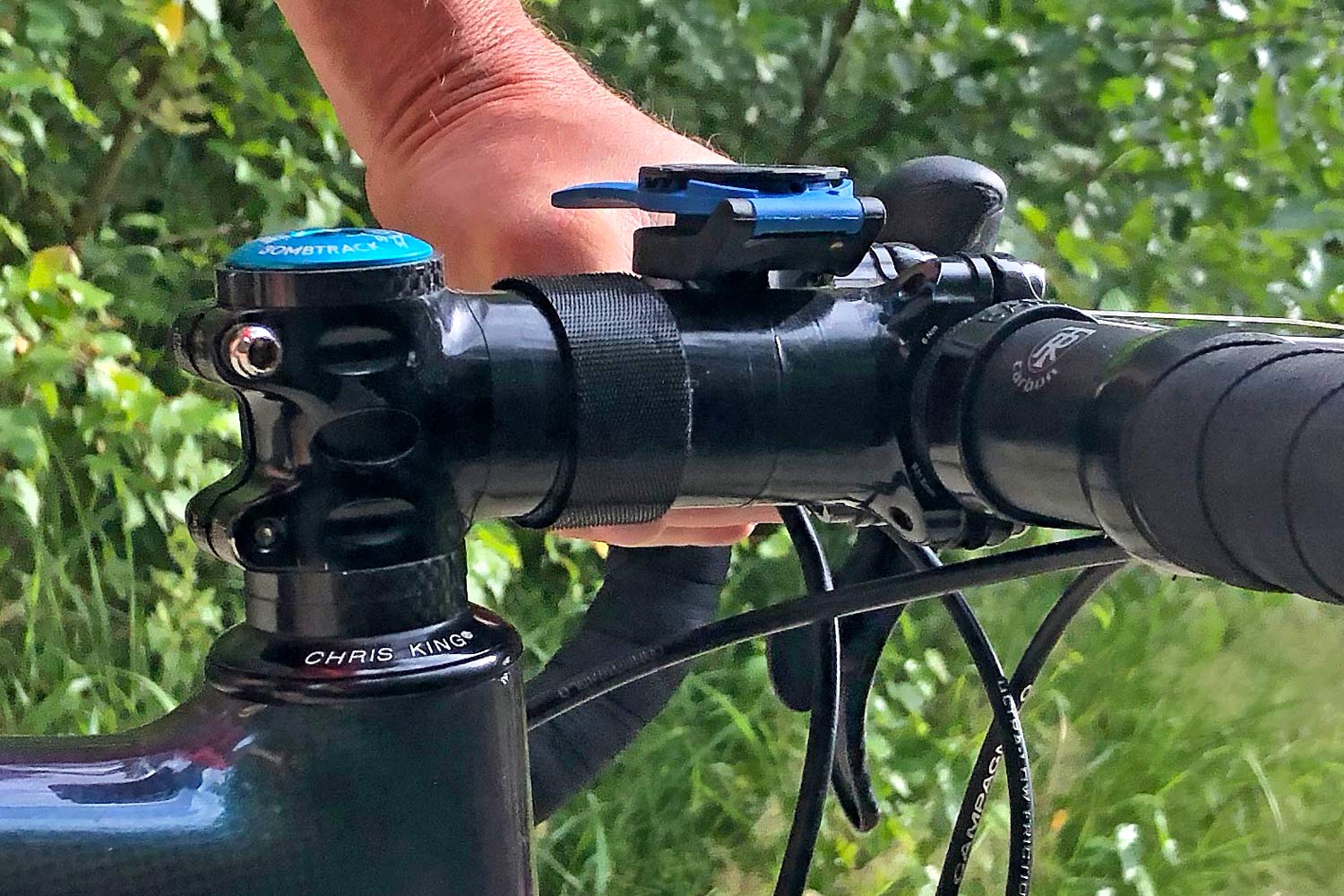 I personally don’t use the phone very often for recording rides, but when I am visiting new cities, nothing beats navigating on a large bright display and with detailed maps like those from Mapy.cz.

At the same time, I’ll occasionally use an app like Komoot during a group ride or event to check my progress over a longer route. Combined with a dedicated GPS device, I feel this lets me get the most out of both the ride tracking/navigating GPS and the better display (but less battery life) of my smartphone. Plus, having a high-quality phone camera always at the ready means my wife always gets nice snaps of our rides together to share with family & friends on Instagram. 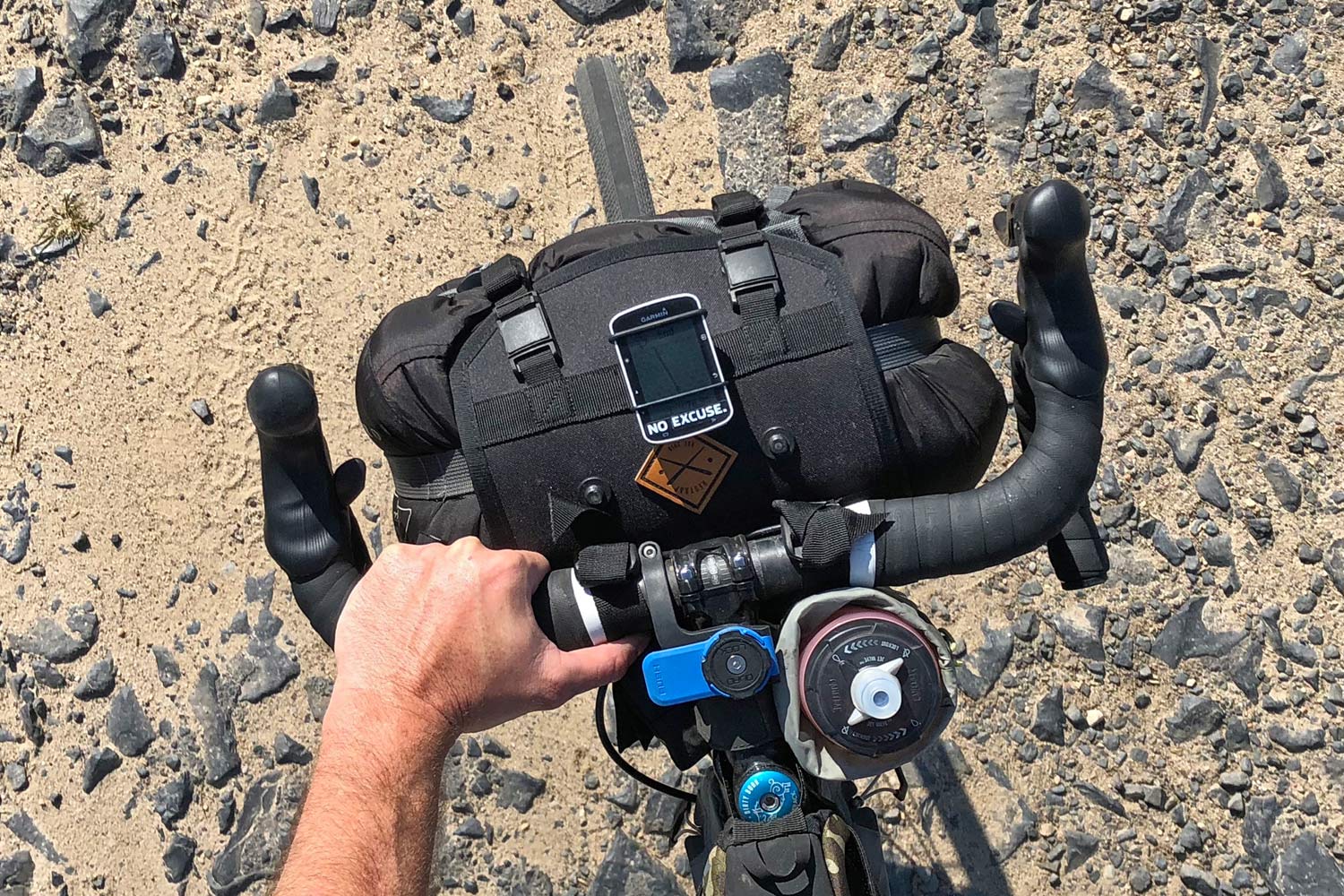 Available direct and on Amazon with free shipping, also check out the Out Front Pro for a longer, lower phone mount.

Have one of these for bikepacking, pricey but excellent bit of kit. Phone stays put no matter how much vibration. Also tried Garmin GPS pile of crap compared to my Samsung smart phone.