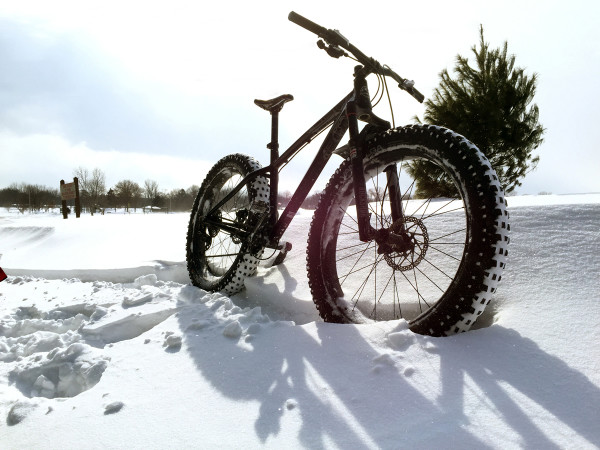 I was excited to hear that Rocky Mountain was giving new life to the Blizzard. It had been a while since the Blizzard held court in the Rocky line up as a much loved steel hard tail, and what better bike to give the name some new life than a fat bike? Yes, the Blizzard is a perfect name for a bike that will spend a lot of its time in the snow, but it belies the true potential of the bike. There are more fat bikes than ever on the market and depending on what you want to get into, there is a bike for you.

But if you’re looking for a fat bike for a little bit of everything, the Blizzard is worth a look… 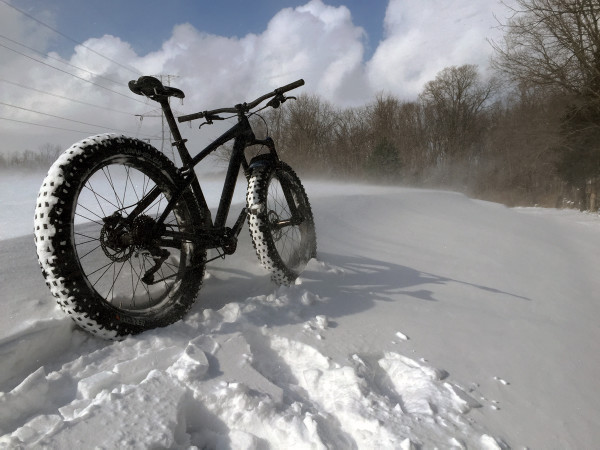 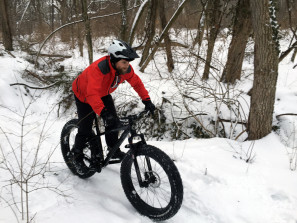 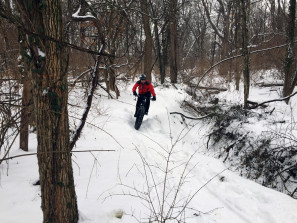 To me, most fat bikes can be lumped into two basic categories – those with expedition geometry and those with more mountain bike geometry. The categories seem be dwindling as they intermingle, but some bikes are still better for tackling something like the Iditabike while others are better for hitting doubles at your local bike park.

At its core, the Blizzard is firmly in the later category which isn’t surprising considering the source. Whether you’re on snow, dirt, sand, or anything in between, the Blizzard has no trouble being thrown around thanks to its short (for 4.7″ tire clearance) 455mm chain stays and 68.5/73.5 HT/ST angles. Combined with the RockShox Bluto set at 100mm of travel and the 1x build kit, the Blizzard rides like a mountain bike with big tires.

If you are looking to get off the trails and out on an adventure, the Blizzard does have an aftermarket frame bag available from Rocky to take advantage of the slick bosses under the top tube. 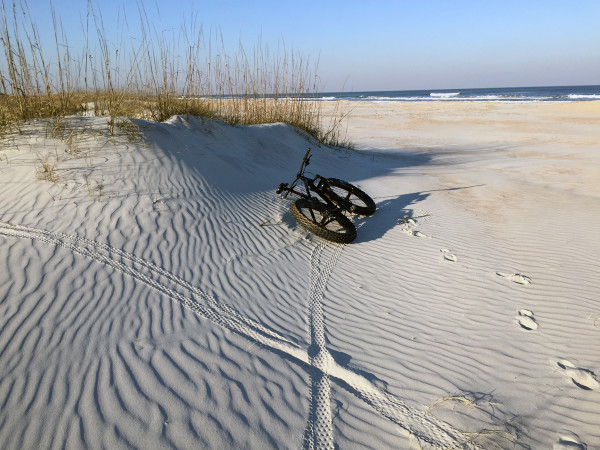 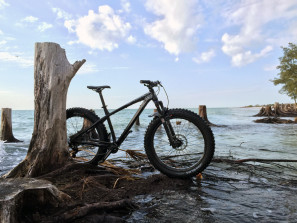 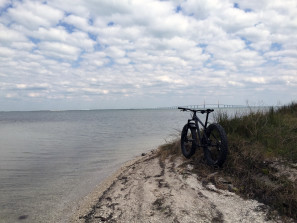 It always seems that when most people think of fat bikes, they think of snow. Lately, I think of the beach. There are few things better than exploring miles of beach by fat bike. Perfect weather, fun and challenging riding depending on the sand and terrain, and the ability to ride to remote locations that most beach goers would deem too far to walk. Thanks largely to the footprint of the 4.7 Vee Tire Co. Bulldozer tires, the Blizzard might as well be named the sand storm as it had no problem navigating any beach it found along the East coast. For part of the adventures I had fitted 4″ 45NRTH Van Helgas which performed surprisingly well in loose sand on the beaches in Florida.

Then there’s the trip to get to the beach which involved driving through Asheville, NC. In spite of only having a fat bike at my disposal, I was not disappointed to rip around the Blue Ridge mountains on the Blizzard.

Basically, whatever the conditions the Blizzard was a fun bike, and could be the one bike for your stable. Or at least the one fat bike. 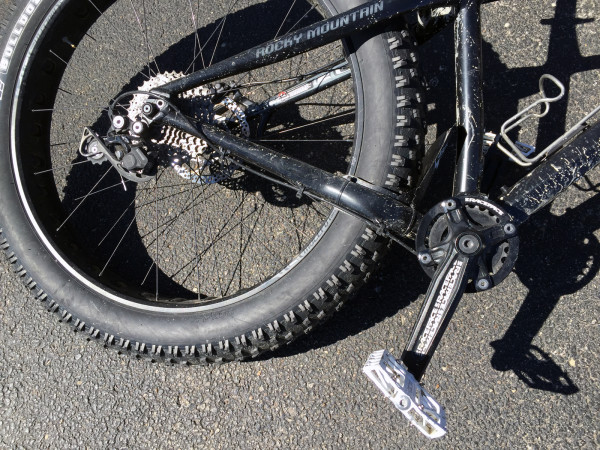 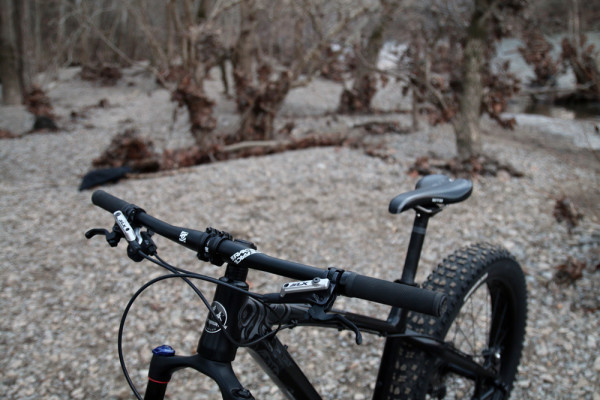 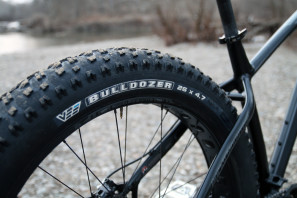 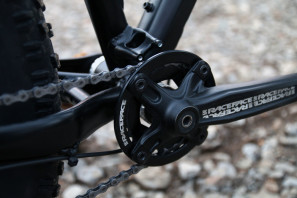 As usual, there were components on the Blizzard that I would (and did) change. The stock Race Face Flat Wide (?) 9º bar was too narrow for my tastes at 710mm. As usual, I’d much prefer a wider bar you can cut down if you prefer. All of my bikes are running at least 720mm bars at this point, so bumping it up to 720-740 would be ideal.

The Vee Bulldozer tires were surprisingly decent, but still offer a lot of room for improvement. The big plus for the Bulldozers is that they are incredibly robust, so if you do a lot of rock crawling or destroy a lot of tires, you might want to keep them fitted. Otherwise they are fairly heavy and contribute a good amount of auto steer to the bike. Fortunately, with clearance for 4.7″ tires, there are a number of options for future upgrades. I will say that the Bulldozers are quite versatile considering how well they roll. Mounted to the excellent Sun Ringle Mulefut 80 rims, you can run ridiculously low pressure without the tire slipping.

The 2016 Blizzard goes to a RaceFace Aeffect Cinch crank with a 28t direct mount ring instead of the bolt on 64BCD ring here. On the upside you’re getting a better crank and ring. Downside, you’re loosing the bash guard which can be nice if you’re wearing loose pants to keep the cuff off the chain. However, if that really bothers you, you can install the RaceFace Direct Mount spider and install a bash guard of your own. Even though the Blizzard uses a standard Shimano 10 speed cassette, the low gearing is adequate thanks to the 24t chainring. However, it does leave you without much of a high end which can be a problem if you’re trying to ride it fast on pavement…

… which is when the only real mechanical came in the form of a broken chain while sprinting through the city trying to keep up with a (very fast) friend on a 29er. This particular Blizzard had been ridden quite a bit before it was sent to us, and considering broken chains happen, I don’t really blame the chain or the bike. 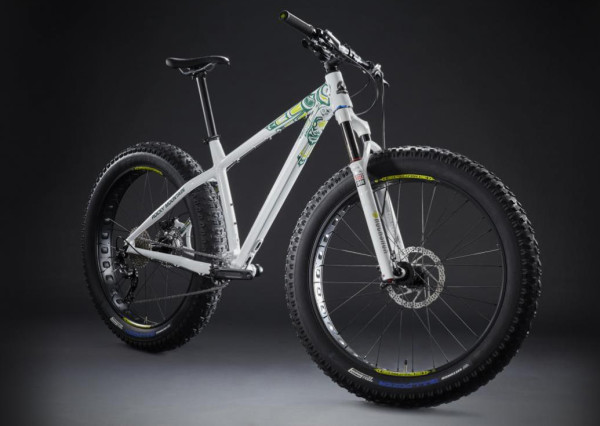 Other than the minor spec change at the crank, the biggest changes for the Blizzard include a shiny new white paint job but more importantly, more rear tire clearance, the elimination of the front derailleur mount, and the fork is now bumped up to 120mm of travel. The aluminum frame still uses a 12x197mm rear thru axle, 100mm threaded BB shell, a Zero Stack tapered head tube, and internal routing including Stealth dropper posts.

For their first fat bike, Rocky Mountain nailed the forecast. With the updates for 2016, and a different handlebar, the Blizzard could be the perfect storm for a versatile, fun, affordable fat bike.

i got ä Rocky Mountain Blizzard 2016 size s. i changes a few things and i love to ride on hills and Ice etc. i love IT, would never Change it.

You are correct Fred … I own a 2016 RM Blizzard -50 and a -30 and both came with the RF cinch 24 tooth chain ring. I changed both the chain rings to 28 tooth RF cinch and both bike have much more top end.

I too purchased the 2016 -30 and the -50 fat bikes last fall. The -30 has been a glorious fat bike, but the -50 has indeed been a nightmare so far. The rear hub on this -50 has failed twice in less than 6 months! The 1st time my dealer repaired the rear hub retainer ring and pawls. Rode for less than 20 kms and this rear hub is completely shot. It’s so noisy the bike can’tr be ridden. Rocky Mountain are supposed to be sending a replacement rear hub to my local RM dealer, but to date nothing has arrived and this brand new fat bike sits while still under full warranty!
Seems I’ll be forced to sue Rocky Mountain for this terrible purchase. So the 2016 RM Blizzard top of line -50 fat bike is the worst bike purchase I’ve ever had.
I’ll never touch another Rocky Mountain product in my life!!

RM sent me a Hope Pro 4 Fatsnow rear hub, but this took almost 6 weeks just to get this replacement hub in hand. This hub has been great so far, but it will rain hellfire before RM gets anymore of my cash based on this nightmare I was forced to endure. RM took too long to address this issue that was a warranty related one that they just dropped the ball on for too long. In the end they had no choice but to replace this hub under warranty or face a suit from me and my legal peeps. Needless to say RM have most definitely ran their course with me and when I needed a top notch enduro bike this last spring I invested in a brand new Specialized Enduro Elite and haven’t looked back since. This new enduro bike has been an excellent choice and a lot of fun to ride, so see ya RM.

Typical of an American to want to “sue” for every perceived injustice they encounter along the road called that’s life. I love my RM Blizzard, most fun bike I’ve evere ridden, no issues whatsoever. Move over Fatboy there is a new Sheriff in town!