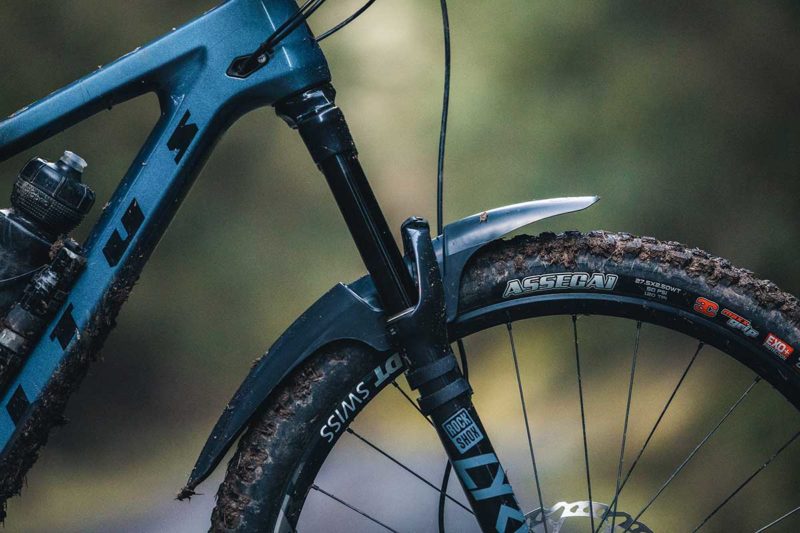 Though drying out nicely now, my local trails of the Tweed Valley in Scotland have recently been in a post snow-melt state. That means chunky, sticky, cake-like mud that glues itself to your frame, weighing you down something awful. A quality, comprehensive-coverage front mud guard is an absolute must around here, so I asked the guys from Mudhugger to send their new Mudhugger EVO up for a spin in the slop. Here’s the report. 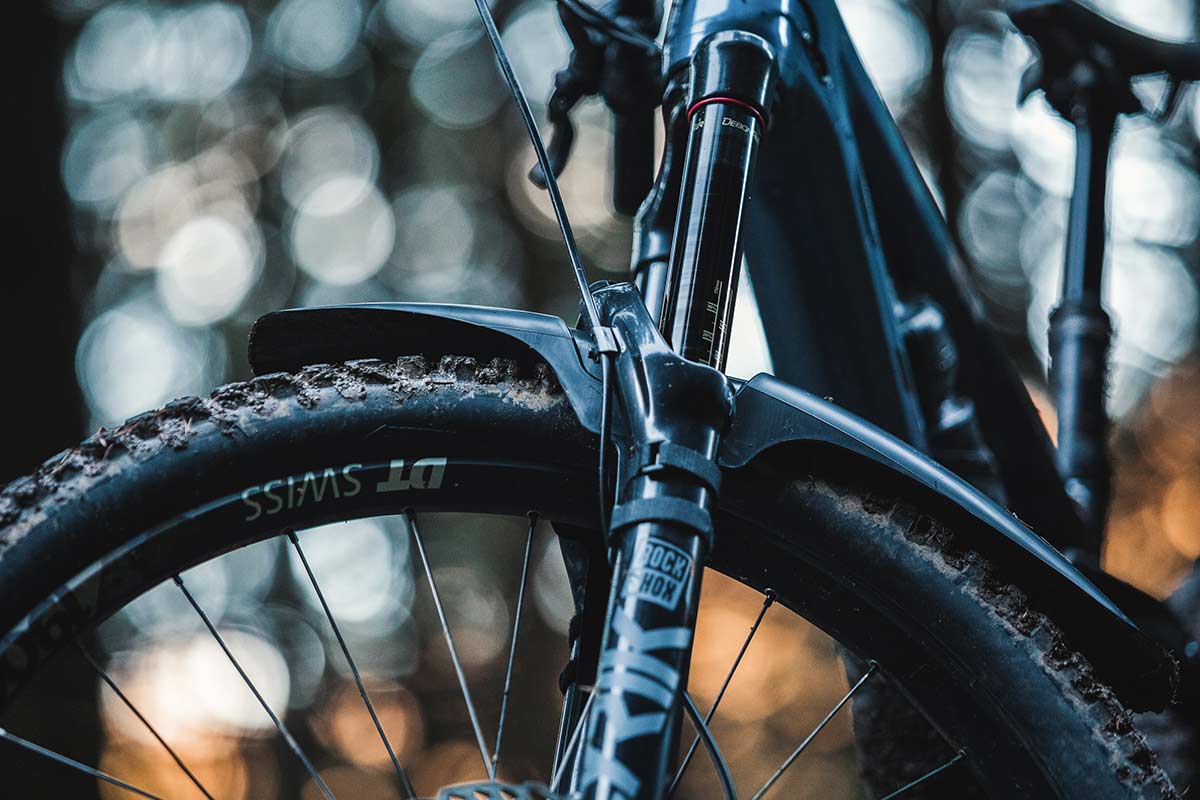 The Mudhugger EVO front fender is available in three versions that differ only by the way in which they are mounted; a bolt-on, velcro strap, or zip tie. Running a RockShox Lyrik fork, we got the velcro strap version in for testing. The bolt-on one would have been our preference, but Lyrik forks do not have the holes for the bolt-mounted version. Mudhugger do make a bolt-on for the ZEB fork, as well as FOX and Ohlins forks. 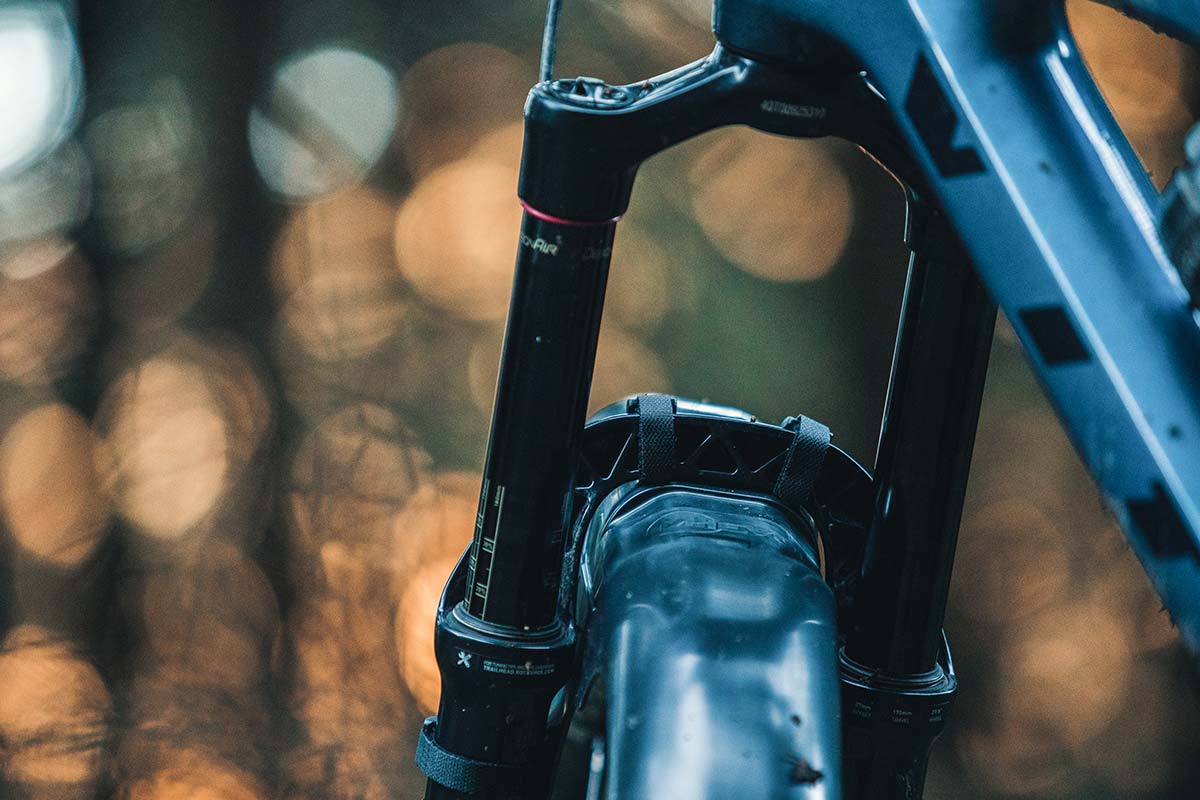 Without the fittings, the Mudhugger EVO weighs a claimed 120g. Not being a weight weenie myself, I couldn’t care less. When it comes to riding in the slop fest of winter, there’s only really one thing I’m concerned about when it comes to my front mud guard… 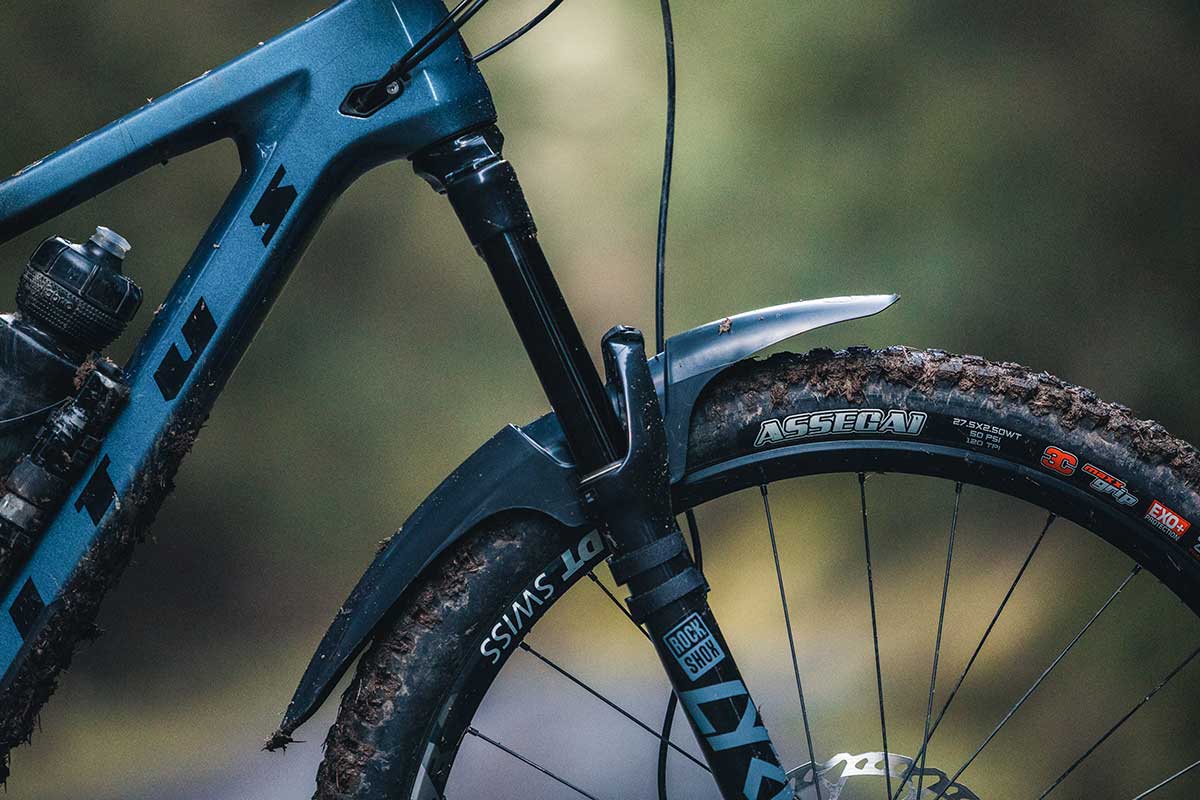 This is where the Mudhugger EVO excels. Available in one size only, the EVO will fit 27.5″ and 29″ wheels comfortably. Though we installed it on the 27.5″ fork of a Vitus Sommet, you can see pretty clearly that the curvature of the guard is a little wider than the curvature of the front wheel. And, there is ample space underneath. Measuring at the front edge of the guard, there is 32mm clearance between the guard and the central tread of the 2.5″ Maxxis Assegai. At each side, the clearance between the tire casing and the guard is 14mm.

The Mudhugger EVO is 515mm long, extending 330mm out the back and 185mm out the front. That compares the the slightly lighter but slightly shorter RRP ProGuard that measures up at 503mm long. Mounted to a Lyrik fork with Boost spacing, the EVO measures ~86mm wide. 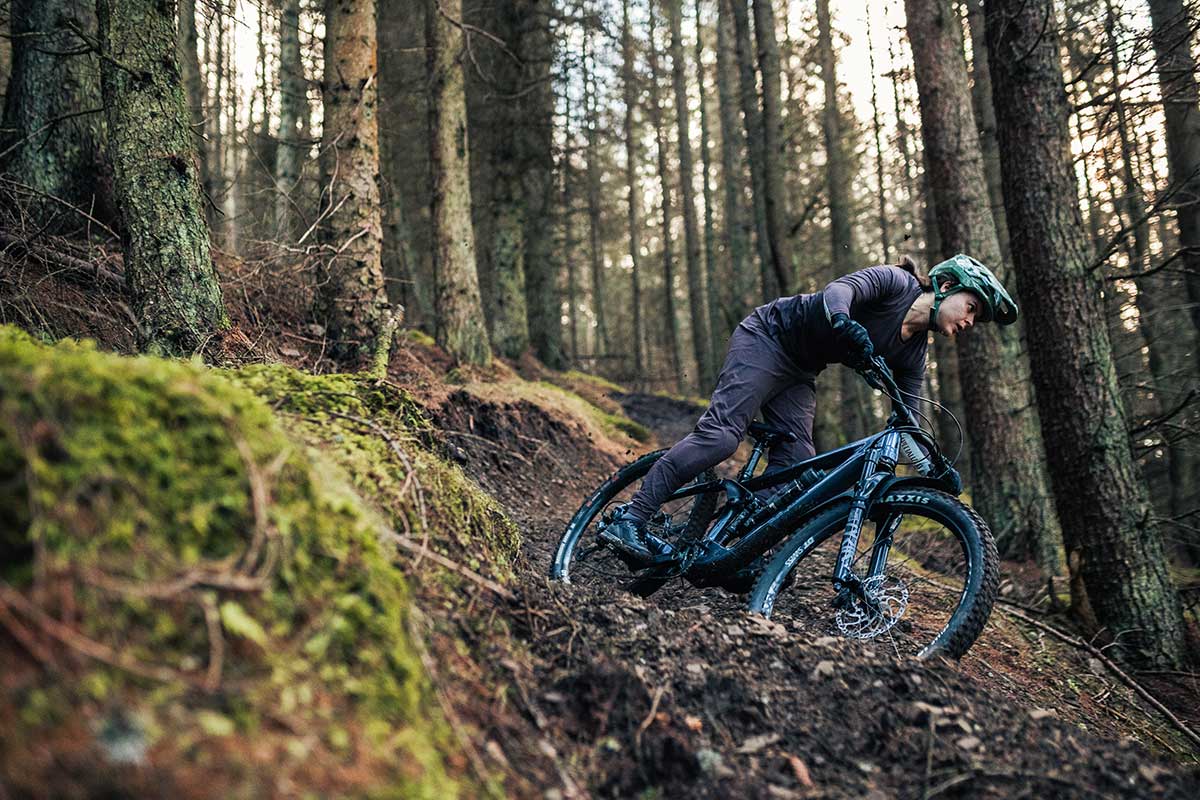 So, does it keep my face clean? Yes, it does this extremely well. I found it so good that in all but the absolute worst filthy conditions of winter, the Mudhugger EVO renders MTB goggles nigh on redundant. OK… not quite, they are still necessary to stop streaming eyes from the cold winter air and to prevent branches from skewering eyeballs, etc. But, I definitely got away without wearing eye protection on a couple of muddy rides, thanks to the massive coverage offered by the EVO. That 330mm of rearward coverage also does a decent job of keeping mud off the top section of the downtube and the underside of the fork crown. This has a couple of advantages; it keeps a lot of water spray away from your headset, helping to prolong bearing lifespan, it makes the post-ride clean up operation just that tiny bit easier, and it also keeps the bike’s weight down as you plough down peanut butter-like trails. 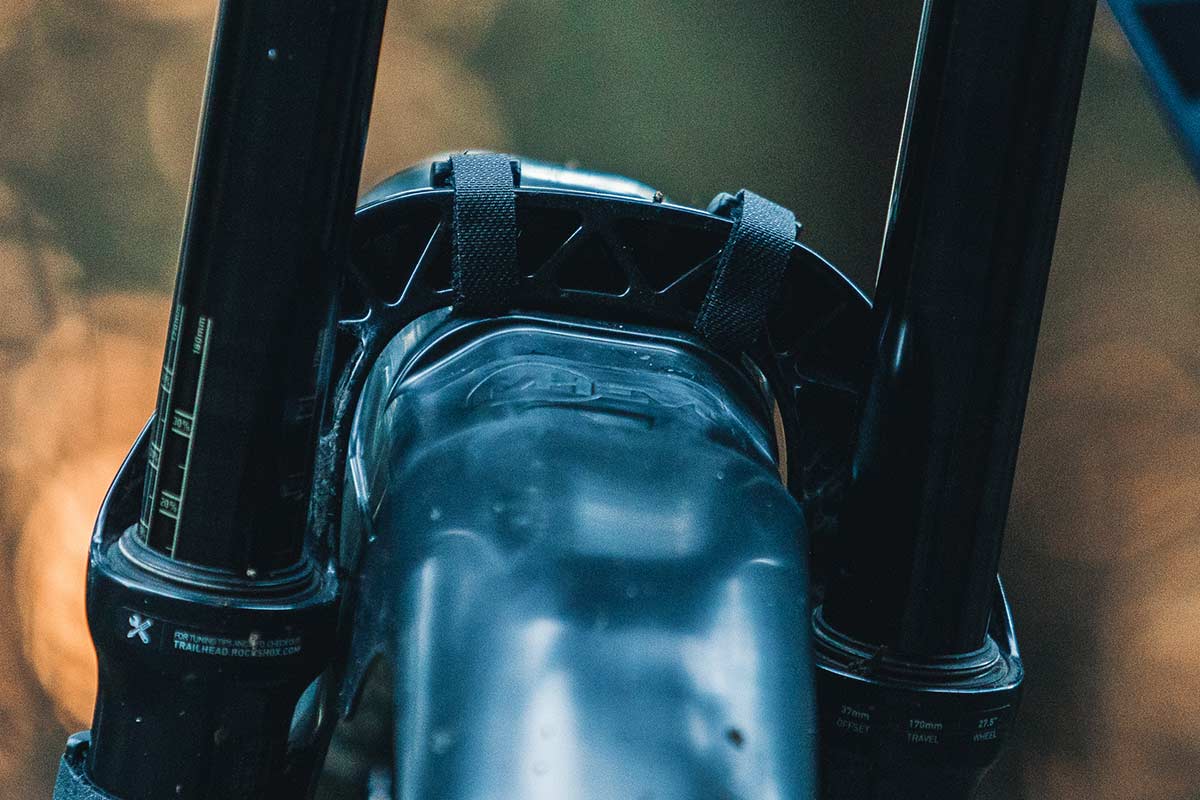 Notice that the portion of the guard that sits directly underneath the fork crown is recessed. This is for good reason. Mudhugger say they have developed the EVO with the new RockShox ZEB, FOX 36 and FOX 38 forks in mind, stating that on full compression of the fork, the crown does not come into contact with the guard.

However, we find that on the 170mm Lyrik 27.5″ fork, the crown contacts the mud guard with around 3mm of travel still left. We actually haven’t noticed any ill effects of this during riding, though. There appears to be sufficient flex in the plastic of the guard that it still permits use of the full travel. 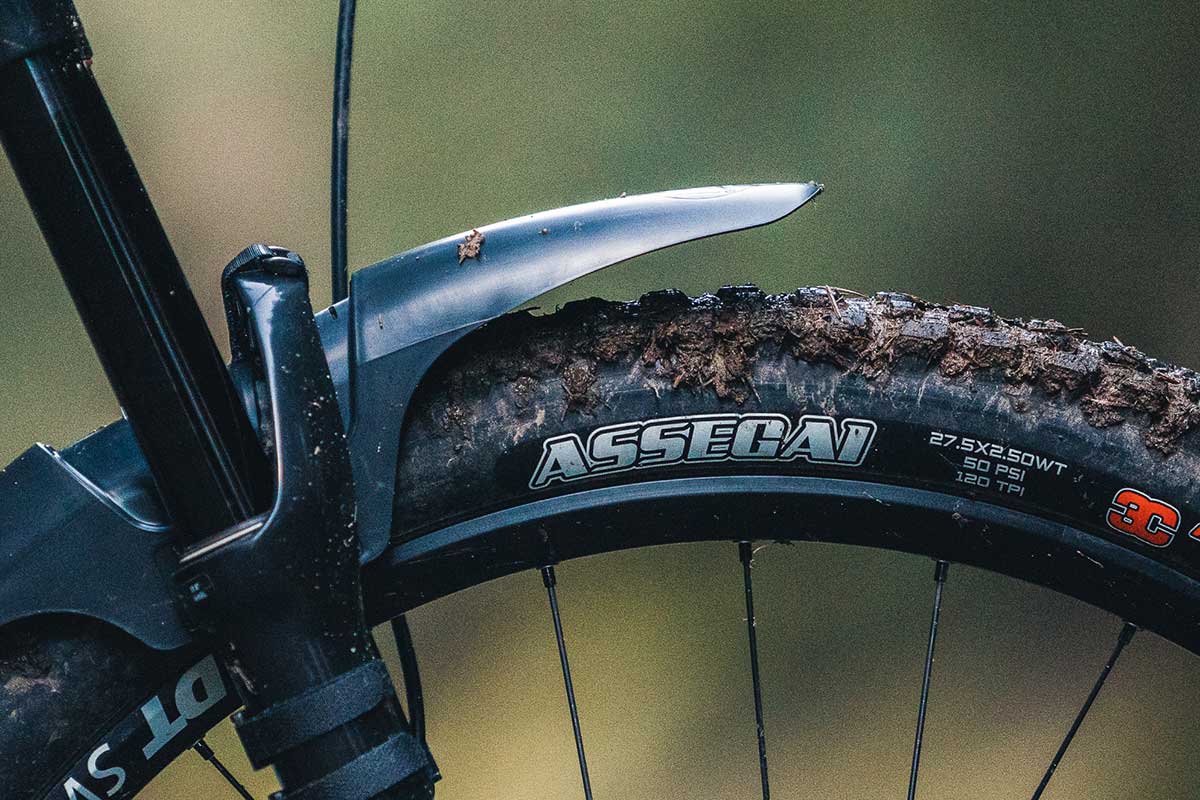 The EVO differs from Mudhugger’s FRX offering in a number of ways; most notably its length, but also in terms of its shape at the front. The FRX is shorter and it has a turned down lip at the front, a feature meant to help clear mud. This lip reduces tire clearance quite substantially; I noticed a number of local riders were cutting the end off to increase tire clearance. The Mudhugger EVO does away with this lip feature, and is instead much longer. No! Six velcro straps hold it firmly in place. Two strap it to the fork arch while there are two strapping it to the fork lowers on either side. Velcro straps are preferable to plastic zip ties as their softer material means they are less likely to result in abrasive marks on the fork.

The guard is flexible enough such that it is very unlikely to snap in a crash, but not so flexible that it would ever flap about in the wind like some cheaper, thinner mud guards do.

While the bolt-on Mudhugger EVO retails at £30, the velcro strap edition tested here is slightly cheaper at £28.50. The zip tie version is cheaper again, at £27.50. For £4.50, you can customize your Mudhugger EVO with decals in one of 9 colorways. All Mudhugger mud guards are sustainably produced, made from 100% recycled PP.