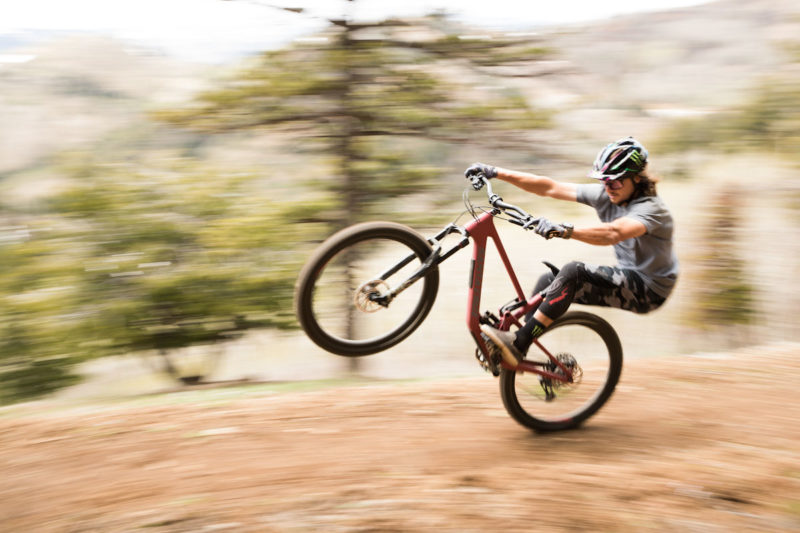 One of the best aspects of a mountain bike is its versatility. While many modern MTBs are optimized for one purpose, bikes like Santa Cruz’s revamped 5010 strike a nice middle-of-the-road balance that makes for tons of fun on all kinds of trails, not to mention dirt jumps, pumptracks, and maybe even skateparks.

With 27.5” wheels, 140/130mm of travel and versatile frame geometry the 5010 serves as Santa Cruz’s playful, poppy all-purpose bike…and the inspiration for their highly creative launch video you’ll find at the end of this post! The 5010 is the most recent model to get the Lower-Link VPP suspension linkage update, but that’s not all: Santa Cruz has decided to introduce size-specific rear ends on the new 5010’s as well. 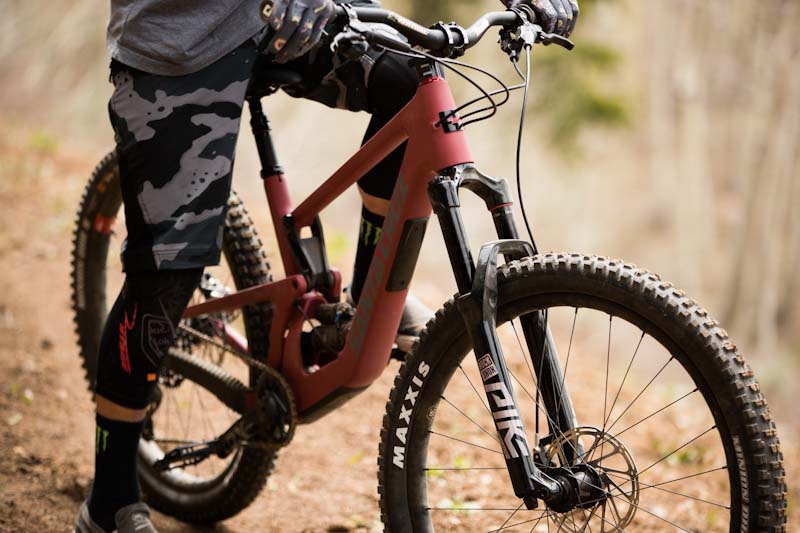 The new 5010 frames will be offered in Santa Cruz’s C and CC carbon only – There is no longer an aluminum frame option. The 5010’s run 140mm forks and offer 130mm of rear travel. If you’ve been following Santa Cruz you’ll know they’ve been updating their MTB’s with the new Lower-Link VPP suspension linkage, and evidently the 5010’s time has come. 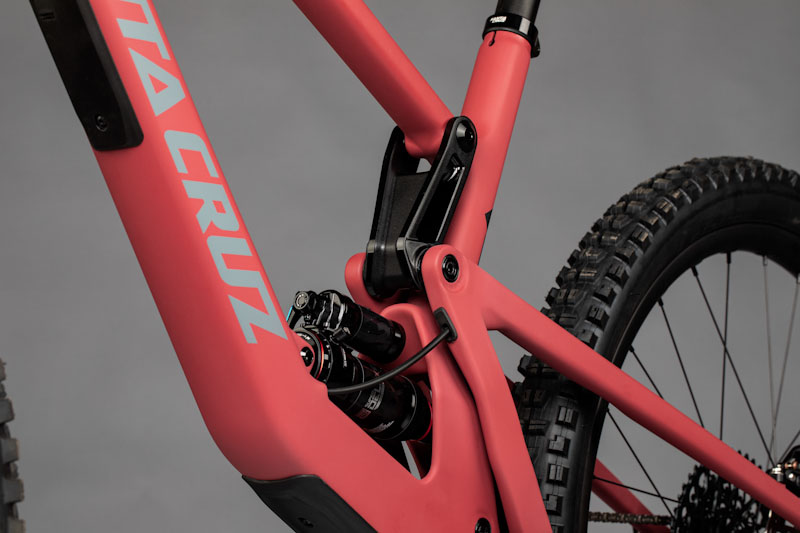 While getting the Lower-Link VPP update, the 5010’s suspension tuning was revised; the bike now offers a straighter, more predictable and progressive feel. The end stroke ramp-up aims to provide a bottomless feeling, so the 5010 should ride like it has more than 130mm of squish. With a straighter leverage curve than the previous VPP design, setting sag is easier to accomplish on the new Lower-Link bikes.

The new linkage was designed to work well with either air or coil shocks, and Santa Cruz says any model or brand of rear shock will fit the frame. For those who might toy with different shocks, the 5010 fits a 210x50mm. 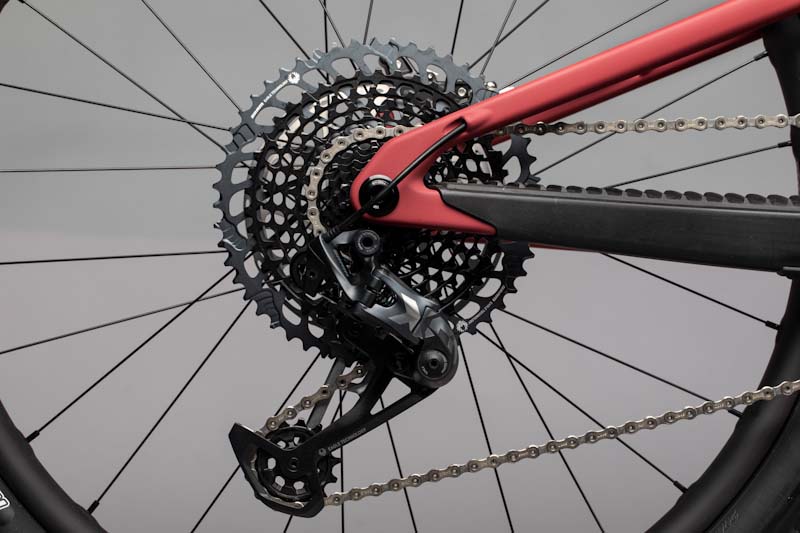 The 5010 rolls on 27.5” wheels, and can fit up to 2.6” widths. The frame uses Boost 148×12 rear spacing, and has a threaded 73mm BB shell with ISCG05 tabs. Santa Cruz also decided to adopt SRAM’s universal derailleur hanger for the new 5010. This hanger is compatible with all drivetrains, and will rotate backwards to reduce damage if you smash your derailleur while riding. 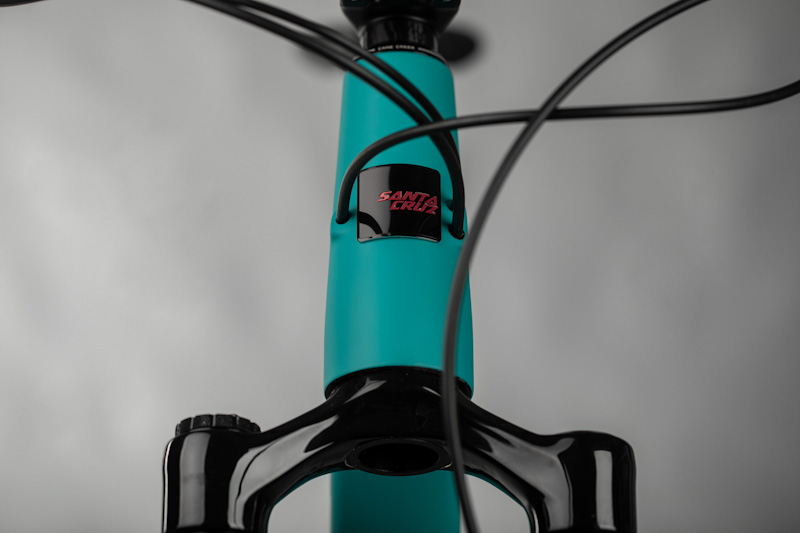 Santa Cruz has possibly the slickest internal routing I’ve seen, with the cables/hoses diving right into small holes near the head tube. Both the brake hose and derailleur cable run internally through the rear triangle as well. 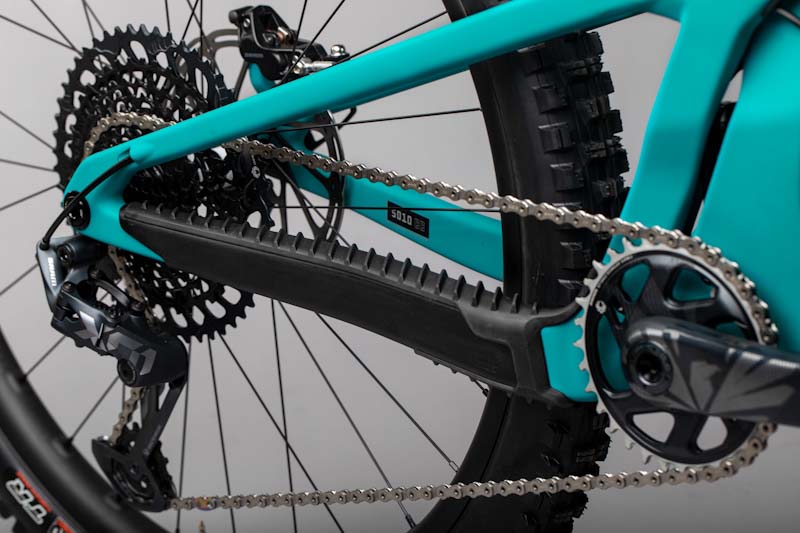 Finishing touches include a shuttle guard on the down tube, a noise-cancelling chainstay guard, and one water bottle mount inside the front triangle.

As for frame geometry, the big news here is the new size-specific rear ends, which (fitting the bike’s playful character) are all very short.  XS and Small frames get 423mm stays, Mediums get 426mm, Larges go to 429mm, and XL’s come in at 432mm. It appears Santa Cruz has accepted the theory that varying the rear end length achieves the best possible rider balance upon the bike. Now the question remains; will they start offering size-specific rear ends on more of their MTBs?

Other priorities for Santa Cruz were a ‘relatively slack’ steering angle, a low BB, and low standover heights to ensure crucial top tube clearance as you play. The 5010’s have steep seat tube angles, ranging from 77.9 degrees to 76.6 degrees depending on the frame size and flip chip setting. The bike has also stretched out up front, with a size Medium now 10mm’s longer in reach than the previous version. 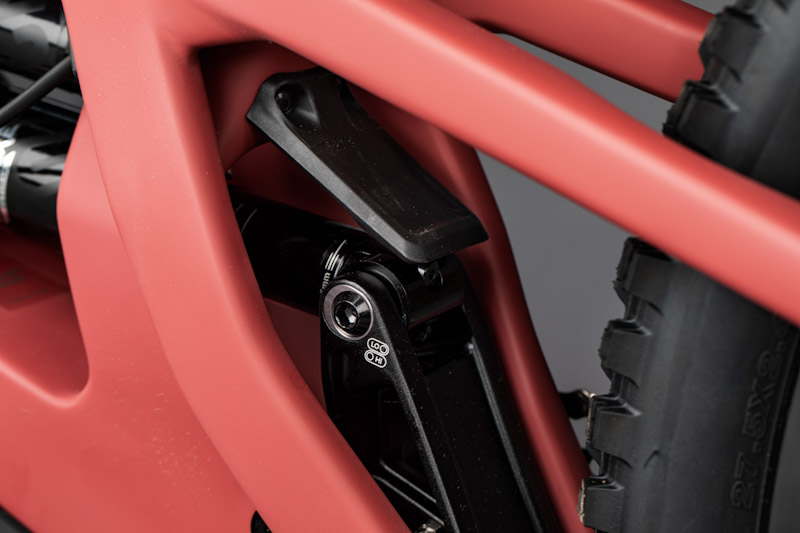 Santa Cruz’ flip chip has Hi and Lo settings, and switching between the two has some effect on several geometry figures, but most of those differences are slight. Moving from Hi to Lo only marginally slackens the head tube and seat mast angles (by 0.3 and 0.4 degrees), but it also reduces reach by 3mm’s and drops the BB by 4mm. See the above geo chart for all the numbers on both settings.

The new 5010 will be available in four models with the C frame, two with the CC carbon, and there is a CC carbon frame-only option. The two ‘RSV’ models provide the option to upgrade to Santa Cruz’s Reserve 30 V2 carbon wheels, which have seen a slight revision in their carbon layup and profile to improve rim strength. 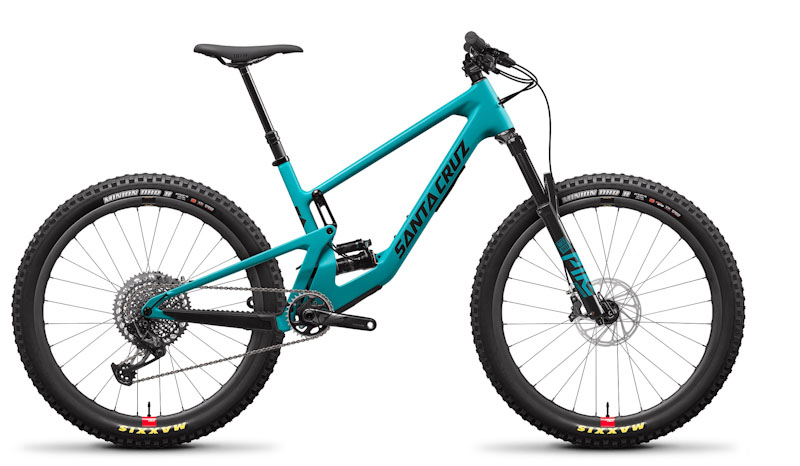 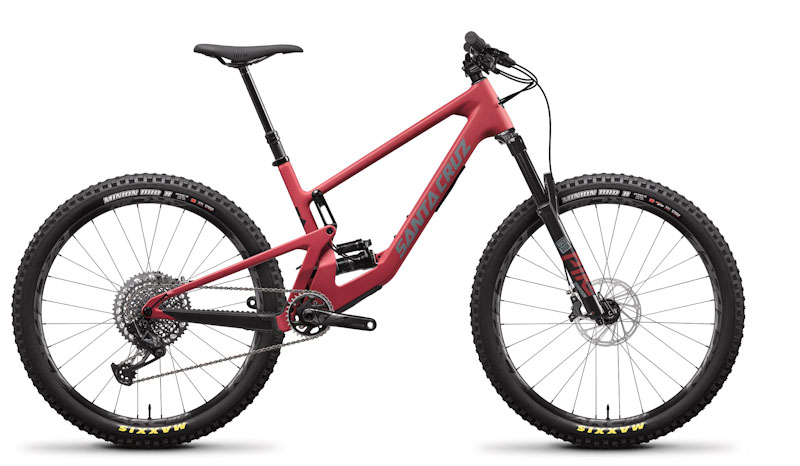 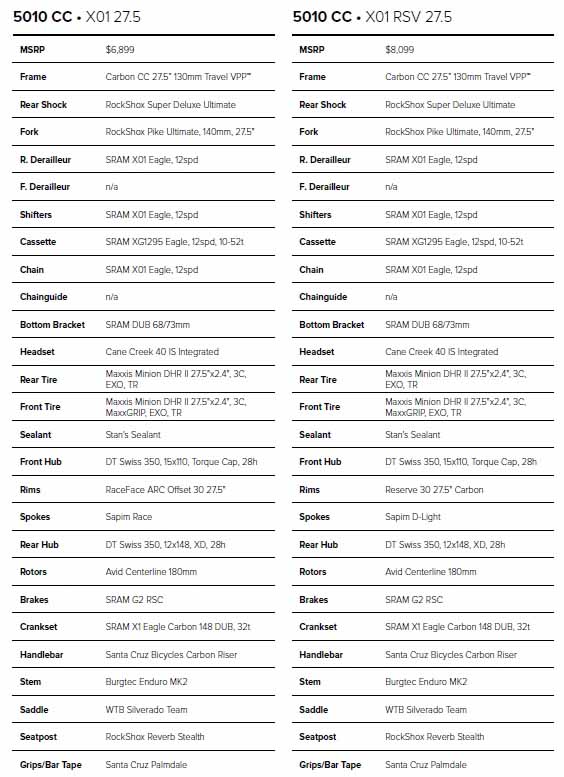 Check out the images for complete build specs, but here are a few things worth noting: The heaviest 5010 available weighs a claimed 31.34lbs, and that’s for a size Large. The high-end builds come in under 30lbs. Santa Crux stocks top-notch Maxxis 2.4” DHR2 Maxxgrip front and MaxxTerra rear tires on all the build kits, so don’t worry about budget-minded OEM treads. 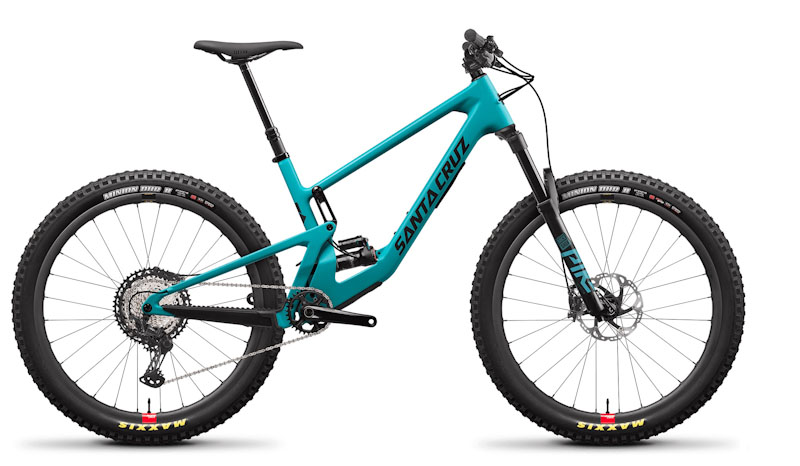 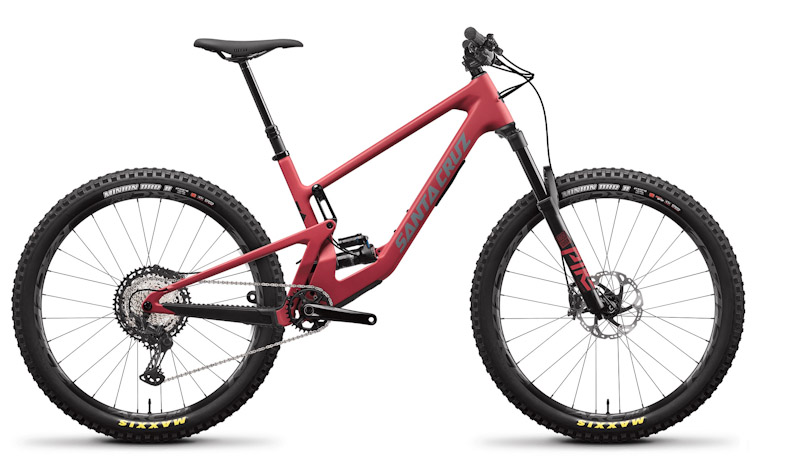 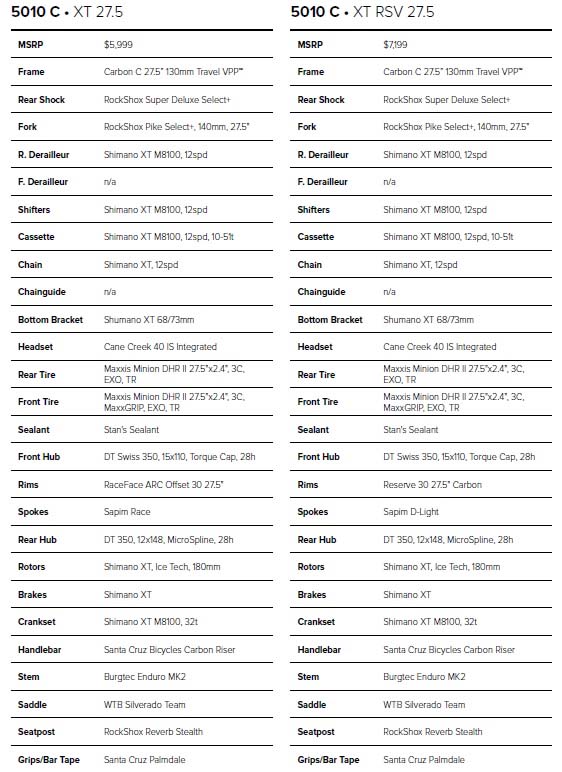 All sizes of the new 5010 get stubby 40mm stems, and the top four models come with Santa Cruz’s Carbon Riser handlebar. The X01 and X01 RSV models get SRAM’s new 10-52t Eagle cassettes, and all models except the base C R feature RockShox Reverb Stealth dropper posts. 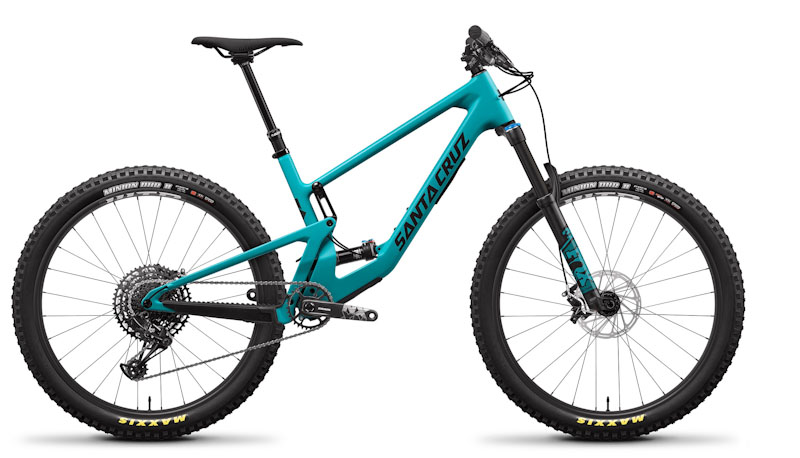 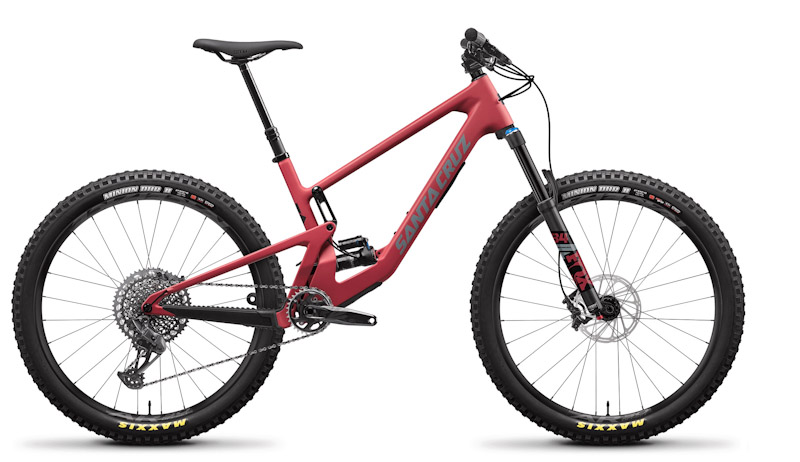 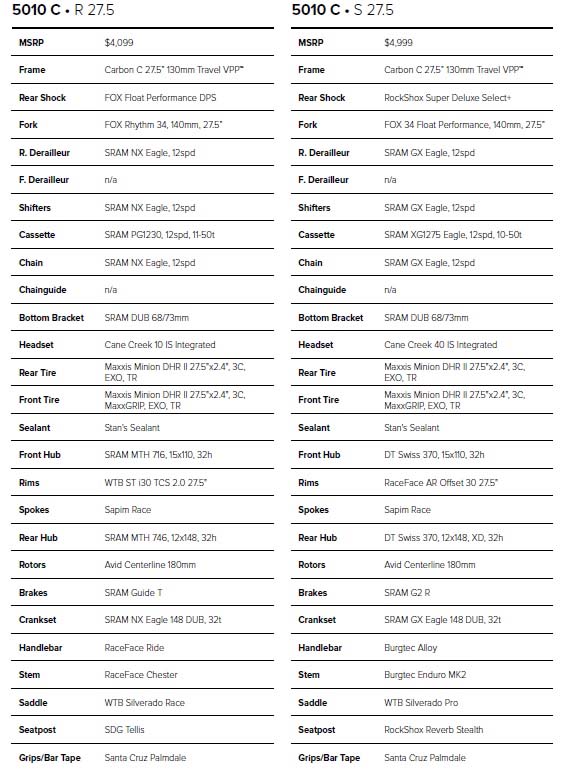 The 5010 will also be sold as a CC carbon frame kit, which includes a RockShox SuperDeluxe rear shock, a rear axle, derailleur hanger, and seat clamp for $3299 USD. 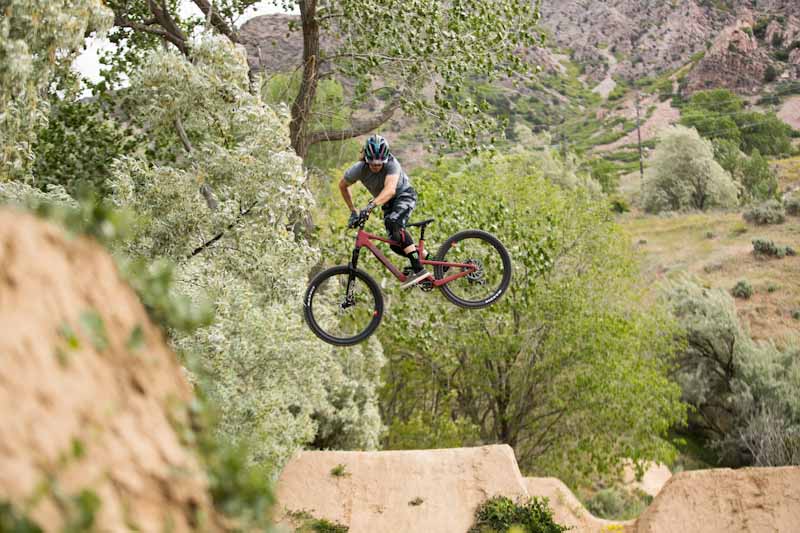 The new 5010 comes in XS-XL frame sizes, and color options for all models are Raspberry Sorbet or Loosely Blue. They are available now through Santa Cruz dealers, so check out Santa Cruz’s website to find a shop near you. Santa Cruz’s frames, linkages and optional Reserve wheels are all covered by a lifetime warranty.

Before you go, you’ll definitely want to check out this 5010 finger bike launch video! Not only does the toy bike capture the essence of the real 5010’s playful nature, it also hits home for many of us who have been confined to our own properties and forced to find creative ways to keep ourselves entertained. Unfortunately, the 5010 finger bike was produced exclusively for this project, and won’t be available to consumers.

Before they wanted to get involved with social policies I wanted one…now. Never.