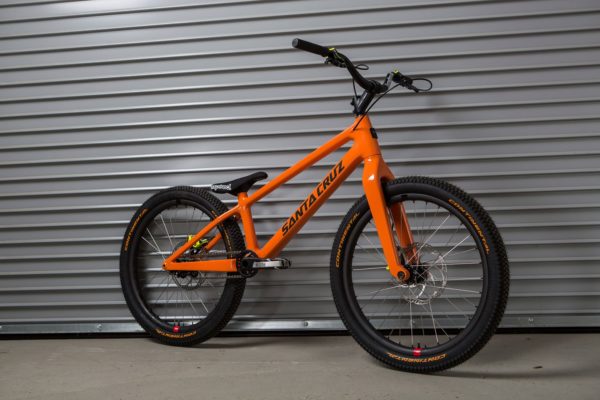 Ever since Danny MacAskill first appeared in The Ridge with a borrowed Bronson, the legendary trials rider has been rolling around on Santa Cruz carbon – when he wasn’t on his trials bike, that is. Splitting duties between his signature Inspired Skye 24″ trials bike and various Santa Cruz carbon mountain bikes, it appears that the time has finally come for a carbon trials bike as well. 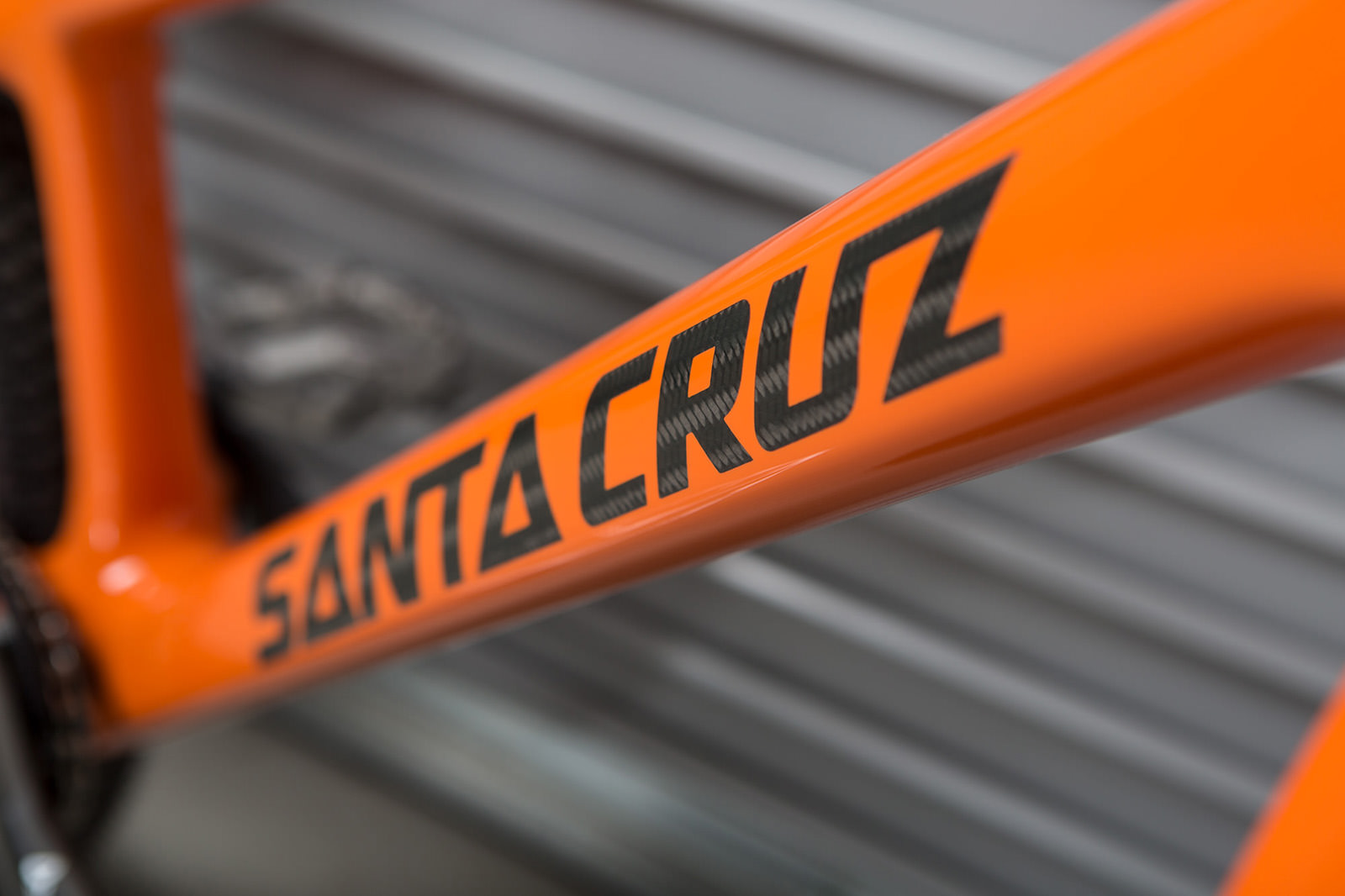 Key to the development of this new one-off creation is the in-house carbon fiber facility of Santa Cruz. While they don’t manufacture their production bikes in the States, they do have the ability to create domestic carbon products as part of their R&D facility. This was initially set up for their Reserve wheel project which was coincidentally another situation where Danny helped them validate the strength of their carbon fiber. Having the facility based in the U.S. allowed Santa Cruz to play with certain carbon fiber that isn’t easily transported out of the United States, and they were also able to develop a new latex bladder molding system to go along with their custom heat press which was made in house. 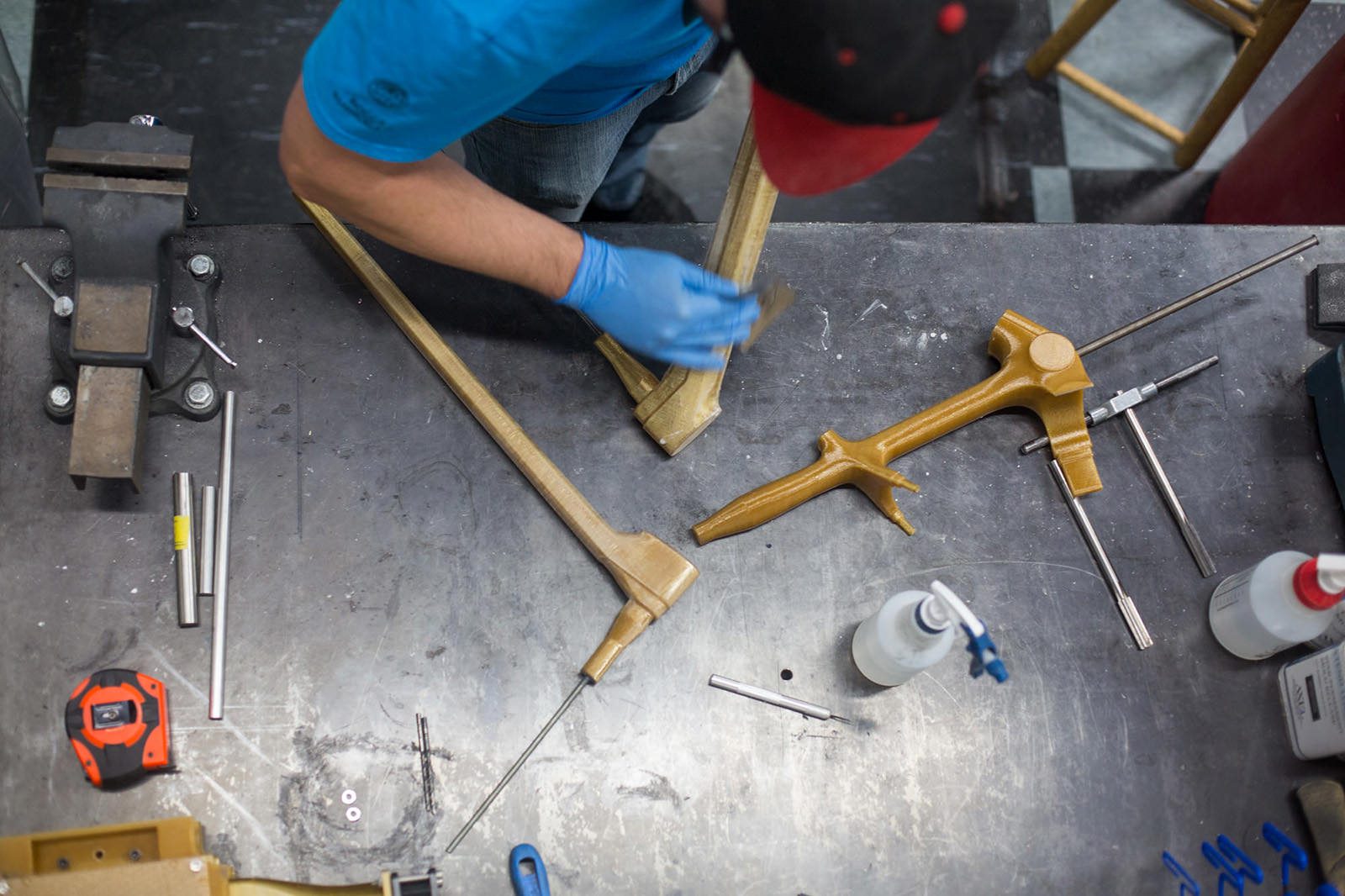 One of the more interesting parts of the development process was how they went about creating the inner molds for the frame. Typically, Santa Cruz like many other high end frame builders use an Expanded Polystyrene mandrel wrapped in a nylon bladder. This allows for a smooth inner wall and nicely compacted carbon plies, but it creates a lot of waste – the EPS mandrels are not reusable. When you think about all the carbon frames out there built with an EPS mandrel system (not just Santa Cruz), that’s a lot of waste. 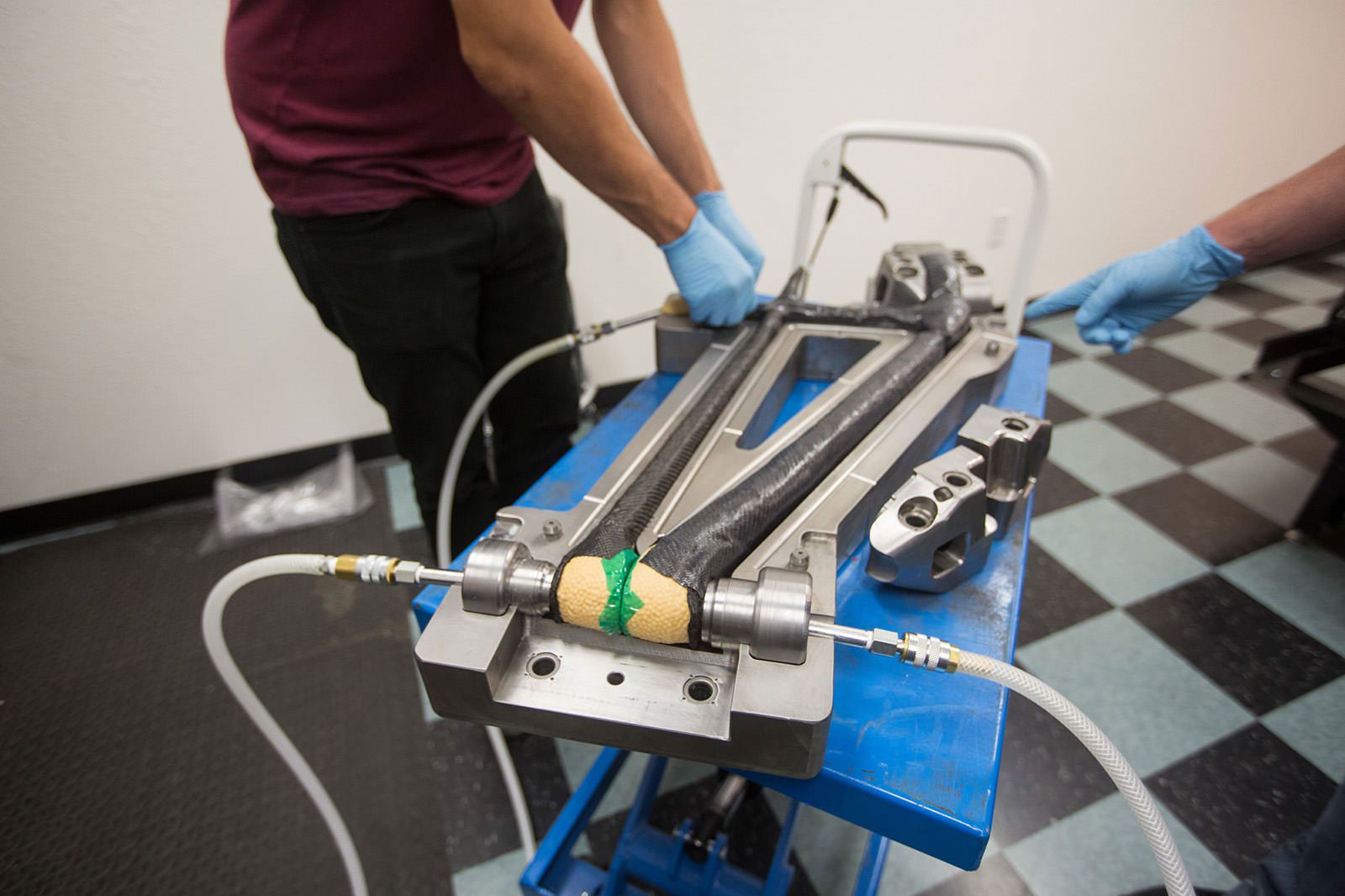 Instead, Santa Cruz wanted to create a latex bladder system. The only problem is that latex bladders are typically formed with complex machined aluminum molds which are very time and cost intensive. As an alternative, SC turned to 3D printing which created the forms for the latex bladders much more quickly and cheaply. 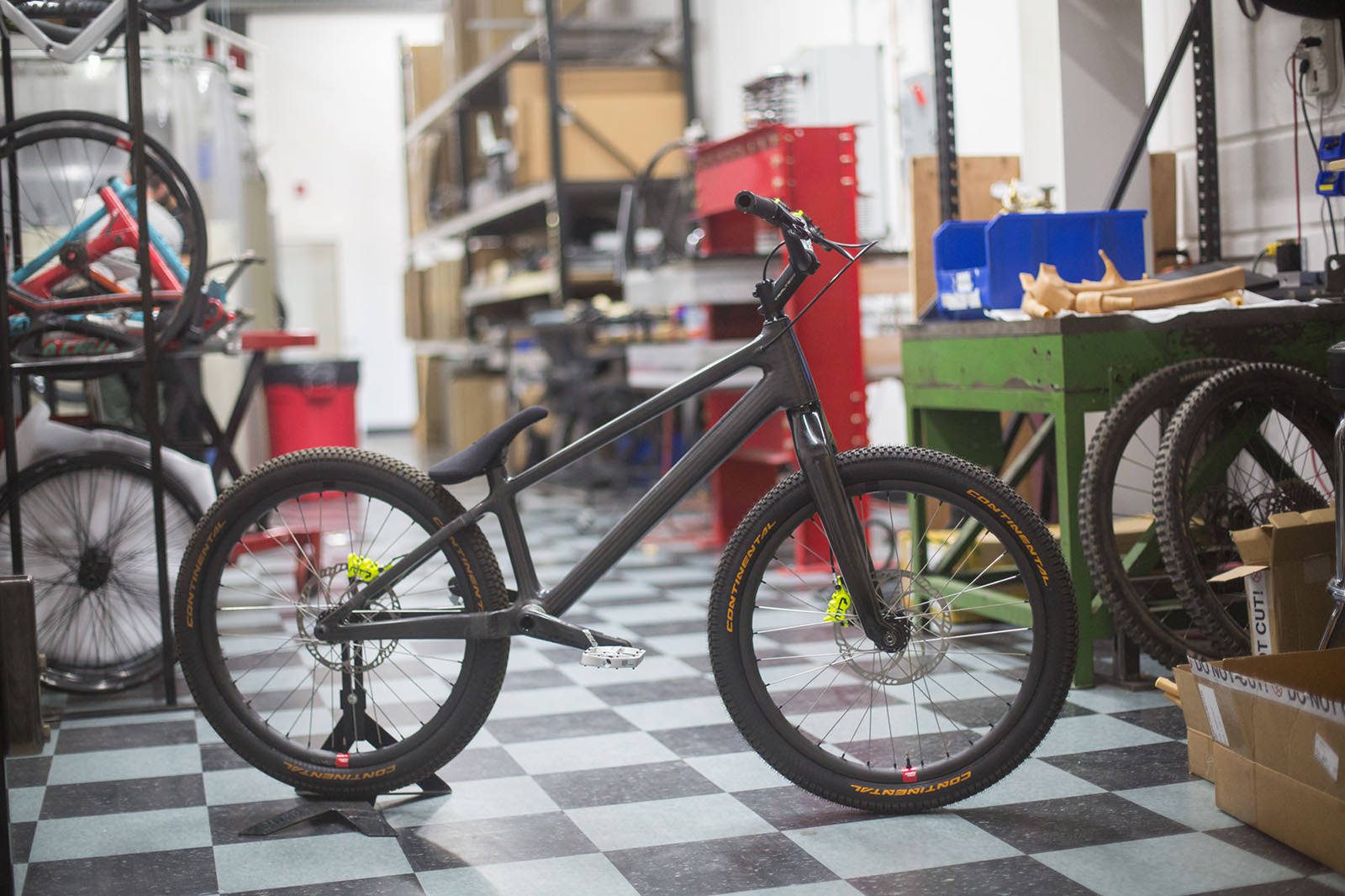 After a ton of work and 11 different prototypes, the final two frames were brought to Scotland for Danny to try and destroy. If you’re familiar with Danny’s work, you know that his style of riding can not be easy on frames. Then you consider that this new bike is 4lbs lighter than his previous trials build and it seems like a tall order for the frame to stand up to the abuse. The first frame lasted an hour and a half which doesn’t sound like much, until you consider the massive drops he was putting it through.

Fortunately, Santa Cruz came prepared with a second frame plus the prepreg sheets and tools needed to make some tweaks. After reinforcing the area of the chainstays that showed a small crack initially, Danny went back out for testing and it passed with flying colors.

The final frame was remade with added reinforcement to the chainstay, and the final product is here. Officially, the bike will be unveiled at Sea Otter, but don’t expect it to be for sale any time soon. For now, this is a one-off build just for Danny… though we certainly wouldn’t mind giving it a go!

To read the whole development story, check it out on Santacruzbicycles.com.

Why does the poster frame of the video show the bicycle being used for tricks, but is the entire video just a guy standing behind a bicycle while talking? Santa Cruz is being insincere about the contents of the video which reflects badly on the brand.

The video is called “Bike Check…” not Danny Riding his new Bike, so I’m not sure what’s insincere about that.

Having a poster frame that is not part of the video is insincere. In this case it doesn’t even come close.

The article literally states that Danny tries to destroy the frame by doing massive drops. The poster frame shows him doing a trick on the bicycle. And then the video is just talking. They didn’t send the bicycle to Scotland to have him “check” it by talking about it, we all know that we want to see those massive drops and some cracked carbon. Santa Cruz knows too, that’s why they put up that poster frame. A classic bait ‘n switch. Not cool.

Agree with this, clicked on the video to see some cool tricks and frame snappage and got duped into hearing about how awesome the equipment that I’m paid to ride is.

Ummmm, that is a lot of work and R&D to not offer it for sale. The market isn’t huge for carbon trials frames but when you have the best/only offering seems crazy not to sell them…
Unless they are just crazy expensive. Like cray-cray expensive.

I’d go with that “unless” scenario….

I believe Bike as a more extensive write-up on the type of carbon weave used and deets on the gov’t reg’s which stipulate they cannot export it commercially unless given written gov’t permission… DoD stuff.

“This is where having a composites facility in Santa Cruz has a serious advantage. Most carbon materials development is done for the aerospace industry, and because of that, there’s reams of paperwork to be done if you want to take it out of the country. But if you’re in the USA, it’s vastly easier to order small quantities for experimentation and prototyping.”