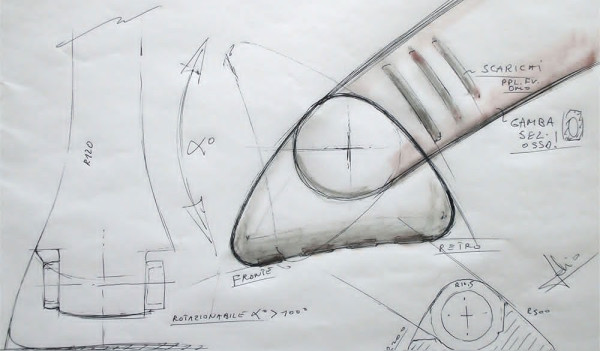 Just how recognizable is the Saris Bones bike rack? According to the US Patent and Trademark Office, the design is now iconic enough to deserve its own Trademark Registration for its unique shape. First introduced in 1996, the Bones Trunk Rack has now sold over a million models around the world. Designed by Fabio Pedrini, the Bologna, Italy based designer has an interesting take on design stating, “emotion may follow form, once form follows revolutionary function”. Pedrini has designed many Saris products including the recent Thelma, Freedom, and SuperClamp Hitch Tray racks.

Meet Fabio after the break…

Madison, Wis. – (December 24, 2014) – Saris Cycling Group is proud to announce that on November 4,2014, the United States Patent and Trademark Office has granted a Trademark Registration for the distinctive shape of the two bike and three bike Bones Trunk Racks. This coveted and difficult to obtain designation indicates that the Bones Rack has a significant recognizable and distinctive shape and design in the minds of consumers. Simply by looking at the design, people are able to immediately recognize it as a Bones Rack, and an iconic Saris product. It is extremely rare in the U.S. Bicycle Industry for a product to have the market presence and design notoriety required for the Trademark Office to grant a Configuration Trademark.

The Bones Trunk Racks were first introduced to the U.S. Bicycle industry in 1996. At that time, the Bones rack was a revolutionary design, introducing sweeping shapes and new materials to the trunk rack market. It changed the way the market viewed bike racks – moving from well-engineered, functional products to a designed piece that not only safely and securely transports bikes but also shows off the bike and car. Since its introduction, the Bones rack has won numerous design awards, including the prestigious Outside Magazine Best Product designation. The Bones rack has become synonymous with a bike rack, and Saris has produced more than 1 million Bones Racks, which have been sold around the globe. The Bones Rack has been made in a variety of colors, several of which support philanthropic efforts such as World Bicycle Relief (red bones rack), Cancer Research (pink bones), and Bike MS (orange bones).

The designer of the Bones Trunk Rack is Fabio Pedrini, a leading industry designer based in Bologna, Italy. Fabio’s philosophy is based on the design equation that “emotion may follow form, once form follows revolutionary function”. He begins the design process by examining the way consumers interact, so that his products make the user experience better, and marry the user’s emotional connection to the delight in using a product, all while instilling confidence. Fabio’s many car rack design patents have covered the last two decades, and include roof systems, Bones Trunk Racks, Solo Trunk Racks, Hitch Racks, and other Saris products like the Thelma, Freedom, and SuperClamp Hitch Tray Racks. Innovative products like the Bones will always be the goal of Saris Brand. Saris will continue to manufacture the unique design of the Bones Trunk Rack striving to deliver joy and a good experience to bicycle consumers everywhere.

I loved my Saris Bones rack. I used it for about five years before trading in my car for a pickup and sold the rack for $100 after using it for so long. If I were to buy another car, I would most likely buy another Saris Bones rack. With it, I could drive 90mph down the highway without a care while carrying three heavy mountain bikes. I work in a bike shop and sell these four or five times as often as any other rack!

Love my Saris Cycle On Pro.

Eh, it’s a nice rack, but not without it’s problems. The plastic screws and threads strip easily, the straps will come loose if you drive it more than a few hours at a go fully loaded, and the straps scratch finishes on bikes. It fits on anything, so that’s a good thing, but this patent is nothing to celebrate. The reason these patents are rarely awarded is it’s the kind of thing that “This could be confused with ours” litigation everyone around here complains about from companies like Specialized comes from.

I had one of these racks and it was Awesome. definitely one of the most stable racks I’ve owned, Like Jason, I took mine with 2 heavy MTB’s up to 120 in my old car in Tennessee, stable as all get-out. Never had any issues with strap-tension, Only problem I did have was the rubber dipping on the hooks eventually succumbed to UV fade/sun rot.

Great, Iconic design. Worth the Trademark look (not a patent, BTW Bill)

Side-note. Mine lived on the back of several cars for appx. 4 years, and was never removed. It’s still a backup/donor rack after I got my Hitch mount.

@Bill – This is not a patent, it’s a trademark. There’s much wrong and broken with our patent and trademark system, but trademarks on original designs such as this are actually exactly what the Patent and Trademark Office are for.

good on Saris for going for a Trademark, rather than the much more litigatable design patent.

I love my Bones, and after 6-7 years, I have yet to find fault with it. I did put helicopter tape on the car where the pads and hooks touch the car.

@pilf: Except patents expire after 17 years while trademarks, like cockroaches, can conceivably survive a nuclear holocaust.

“Proud”? This puts Saris in a negative light in my book, enough to make me look elsewhere where their brands are concerned.

1. The hard rubber pads are much more abrasive than the foam rubber found on cheaper racks.
2. The fixed bike mounts make it much less flexible – getting three bikes on (while technically possible) is a royal pain.
3. The fat arms also make it difficult to mount anything but a big diamond framed bike.
4. All the straps coming from one central location is not ideal, it requires more tension on the straps to hold it in place. And since all the straps are connected and not directly fastened to the rack, if one strap fails it weakens all the straps.

By far the worst rack I’ve ever owned.

Interesting to see that they trademarked the design (indifferent otherwise IMO.) I’ve had four of these suckers over the years, two 3’s, a 2, and a 1 (which I’m not sure if it is actually a bones.) One time I went careening off the side of the road in my VW with my Cannondale on the back. Bike and rack were undamaged, car, not so much. Sold that rack when I got a truck to replace the car, later on had some more of them for various cars, all held up great, still have a single carrier (once again, I cant remember if it is actually a bones) that goes on my girlfriend’s miata when she needs it. I have since upgraded myself to a 1up rack, but will always reccomend the Saris (fully recommend the 1up too)