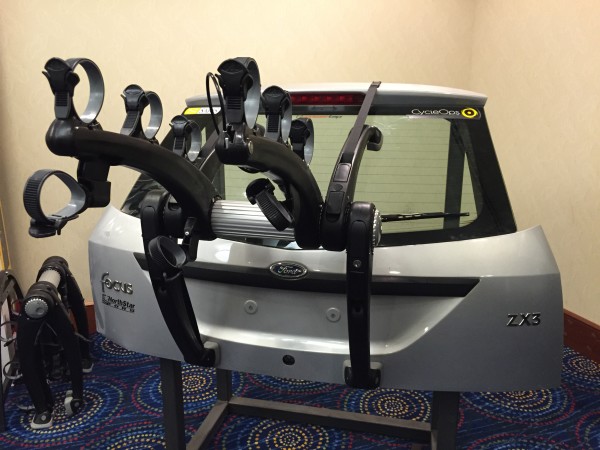 In terms of product design, especially for the bike industry, the Saris Bones rack has been around quite a while. The design is so recognizable in fact, that they were just granted a configuration trademark which puts the Bones in the same class as the Coke bottle.

With over a million Bones racks sold since it was first introduced in 1996, even the rack’s designer Fabio Pedrini was skeptical when Saris approached him about improving on the original design. While the adaptability, looks, and ability to withstand the harsh Midwest winters were favorites among consumers of the Bones, Saris wanted to improve on the rack’s strap management and security without compromising the beautiful design.

After a few tweaks, and input from both Fabio and Saris’ engineers, the company is finally ready to unveil the new Super Bones… 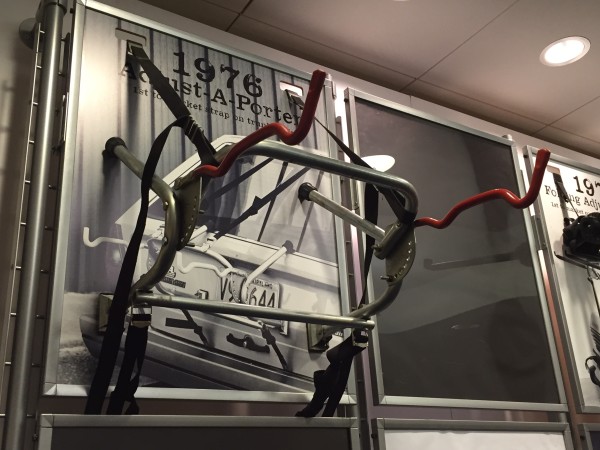 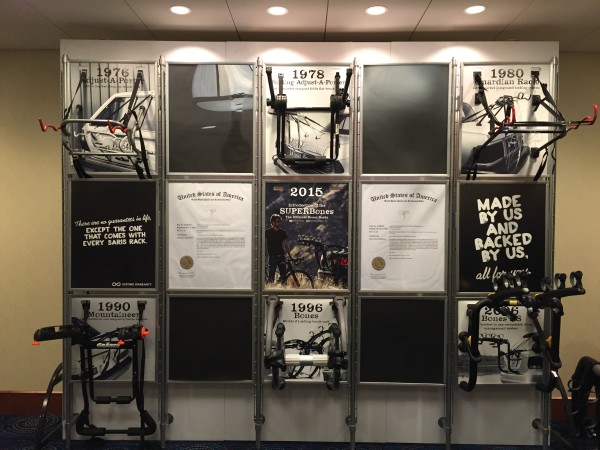 Over the years, Saris (and technically Graber) have had a lot of firsts for trunk mounted racks. With a combined 40 years of business, the Super Bones represents the 7th generation trunk rack from Saris after starting with the first ever rack in 1976. The Adjust-a-porter was introduced by Graber in 1976 and retailed for a whopping $26. Along the way other firsts included the first folding bike rack in 1978, the first locking bike rack in 1980, and the first ratcheting rack in 1990 with the Mountaineer. 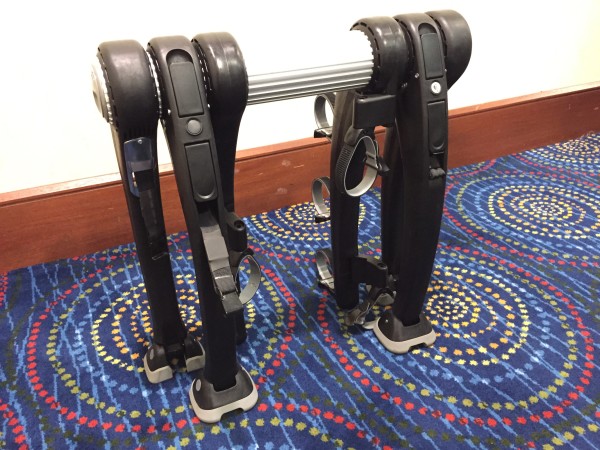 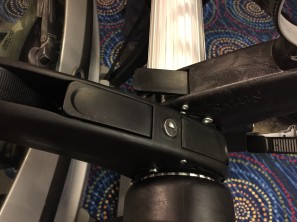 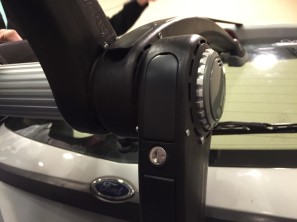 Like the advertisements for the original Bones rack, the Super Bones definitely does not resemble your parent’s beach chair. One of the best features of the Bones is the adjust ability and adaptability of the rack thanks to the plastic arms that can be repositioned on the aluminum spindle, and that hasn’t changed on the Super Bones – but it has gotten better.

Instead of thumb screws to hold each arm in place, the Super Bones uses locking cam levers which are much faster to adjust. The lower arms are factory set, so all you have to do to install the rack is set the distance for the upper arms, and the bike supports and you’re off. The rack includes two lock cores on opposite legs which lock the rack to the car when in place. 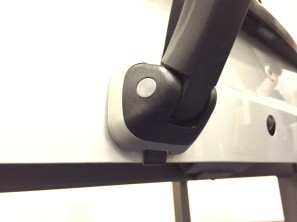 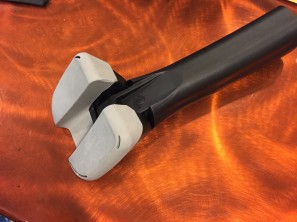 Car fitment is improved with new foot pads which rotate up and down, but also pivot side to side for more complicated bumper or tailgate shapes. Because of that the new Super Bones will fit more vehicles than the standard Bones. 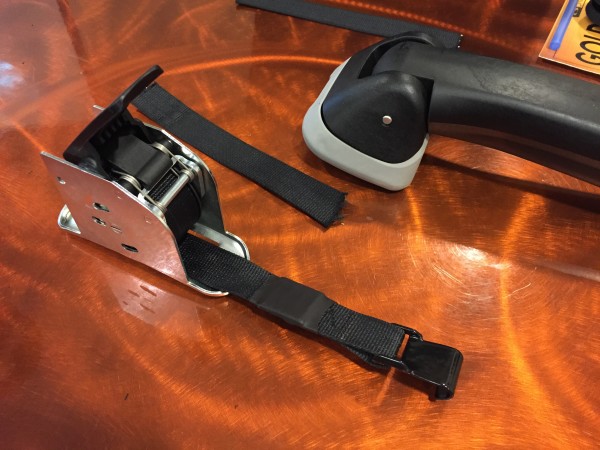 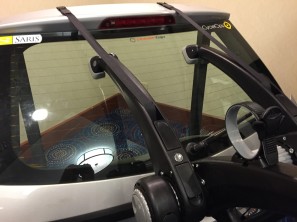 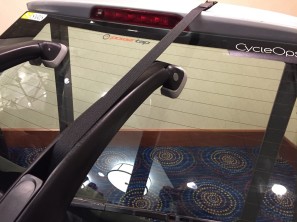 Each foot pod includes a channel which allows the new straps to go under or over the foot for improved fit and looks.It’s this strap design that really sets the Super Bones apart. Depending on the vehicle, you may have to do a double take just to find the straps.

At the heart of the new design and improved strap management is the ratcheting strap cartridge which is bolted into each leg. Functioning a bit like a tape measure, pushing down the locking lever will allow the straps to extend, and then the lever is ratcheted tight. Technically, the ratcheting cartridge could be replaced if it ever failed, but since the Super Bones will carry a lifetime warranty like most Saris products, you probably won’t need to. 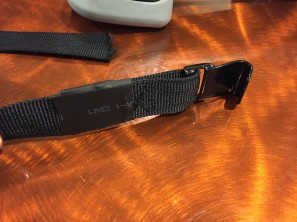 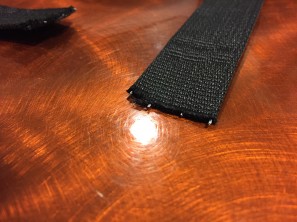 All of the metal parts of the strap hardware are coated to prevent rust or damage to the vehicles, but that’s not the big news here. To add extra security to the straps, Saris has woven four stainless steel strands into each strap which prevents someone from quickly cutting the straps to take the rack and bikes. 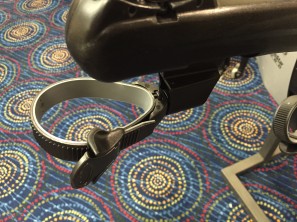 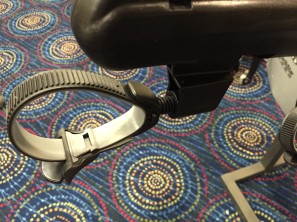 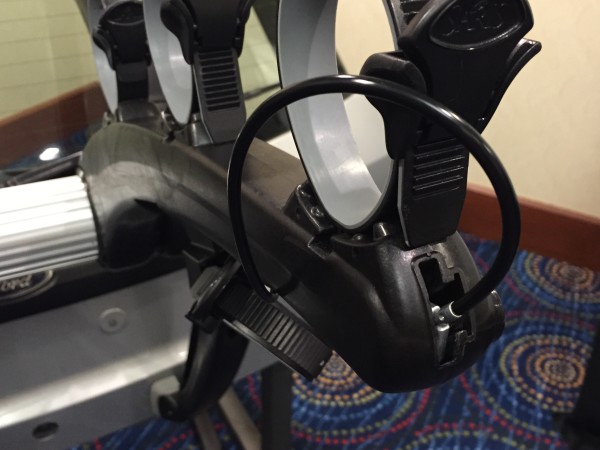 Equipped with similar cradles as the original, the Super Bones has a few new tricks. The anti-sway cradles fold up for easier loading, but they also include a micro adjustment to allow better fit of bikes. If you have bikes that the pedals or frames are interfering with each other, the anti -sway cradle can be threaded in or out which tilts the bike away from the obstruction.

The Super Bones also includes a locking cable to lock the bike to the rack which uses the same key as the lock cores in the legs.

Shown to us as a production sample, Saris plans on making the rack available to the public after they complete 100k miles of consumer testing which should mean a few months. Pricing is TBD, though Saris jokingly stated that it would be under $500 (it should be well under $500).

Definitely heavily influenced by the Thule Raceway series but it looks like Saris addressed just about every complaint I have with my Thule Raceway 2.

On two beers, I’m definitely not heavily influenced, but all these photos look upside down.

Note: Bike racks mounted so that the bike obscures brake lights and license plate are illegal in the EU and will cause you trouble with State Troopers and the CHP in US!

Pics must be from our antipodean friends though , don’t know how legal they are there!?

You aren’t drunk Champ they are upside down. Interesting they didn’t notice that.

These are only for F1 cars that produce enough Gs to drive upside down…small, niche market

if you want to kill your paint on your car buy a bike rack like this. My beautiful black paint is f***d up due to a Saris bike rack

Have owned a Bones for 10+ years and like all the updates, especially the strap cartridges and security updates, but with that comes extra complexity, weight and cost.

These sorts of racks will kill your paint on your car. My beautiful black paint is F ed up due to a Saris rack.

I’ve had a Saris rack since 1998. Bought it when i moved 700 miles and a mover wanted to simply “Put your nice bike on top so it won’t get damaged.” Cost me $125. I remember because it was the same amount as my last pay check for the 20 hours I could work.

Still have that one. Saris racks don’t die. I have new racks for my cars, but occasionally I will still use that one.

You’re either Kuat or you’re not…

Love my Bones rack, but I think I could quickly grow to love the new Super Bones.

I’ve been using Bones racks for years and never had issues with my cars paint. Keep the car clean, keep the feet of the rack clean, no issues.