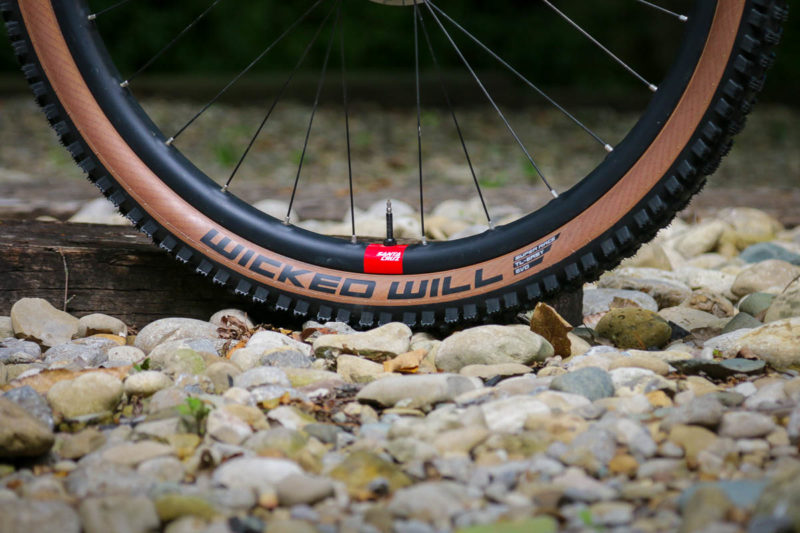 It’s been a while since we’ve seen Wicked Will. So long in fact, that 26″ tires were still the size of choice for the world of downhill. A lot has changed since then. Most 26″ tires have been pushed out in favor of 27.5 or 29″, mountain bikes perform better than ever, and new categories like “downcountry” have gained in popularity.

Much like “groad bikes”, we’re not a big fan of the downcountry name, but we absolutely love the bikes. There’s just something so satisfying about a bike that is XC-fast, but doesn’t hold you back when the trail points down. With the right set of tires, the potential of these bikes can seem to be almost… unlimited. 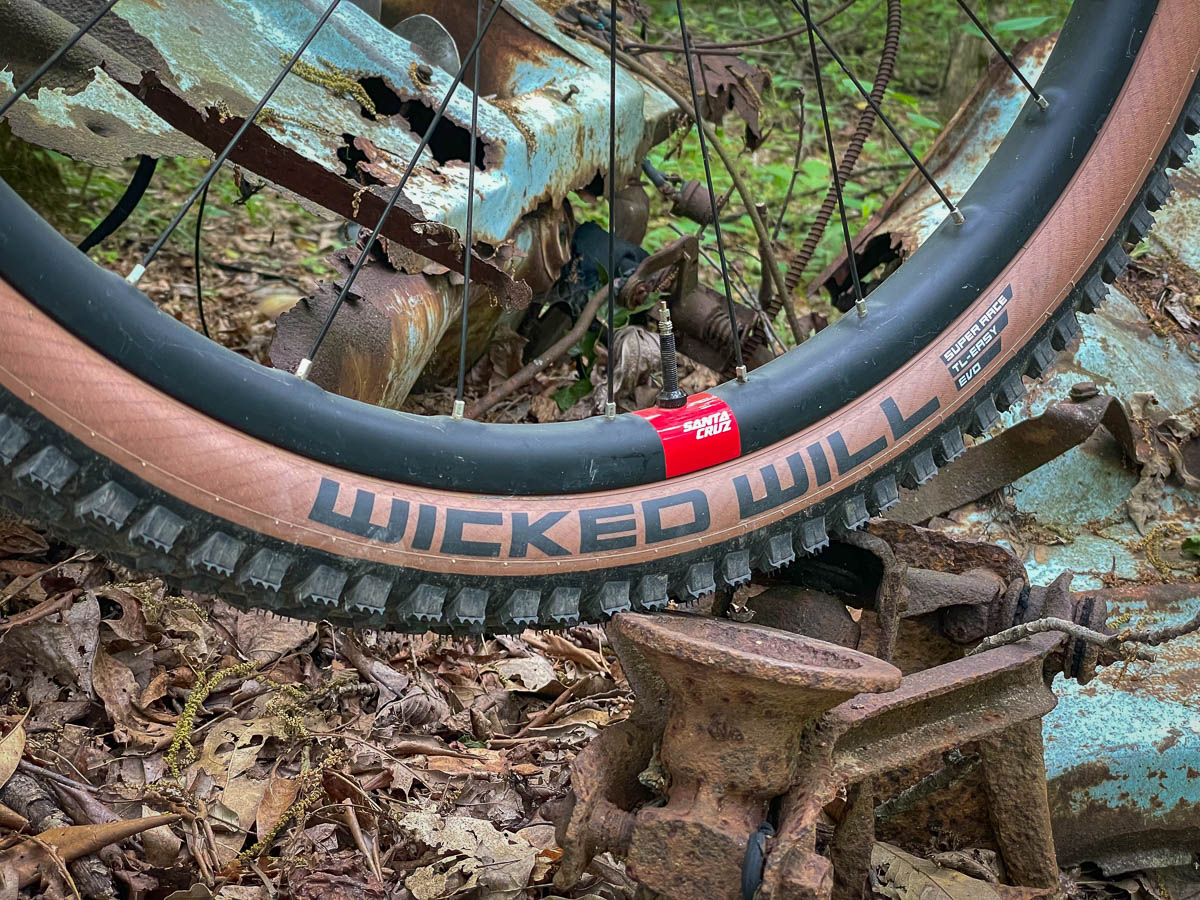 Which is where the all new Schwalbe Wicked Will comes in. Reborn as an all purpose Trail tire, the new Wicked Will isn’t quite XC, and it’s not full-on Enduro. Which is exactly the point.

According to Schwalbe, the new Wicked Will slots in between the Racing Ralph and the Nobby Nic. Combining the tread depth of an XC tire with the block shaping, siping, and proportions of a more aggressive tire, you end up with the Goldilocks of trail tires – fast enough for XC use, but enough grip for more aggressive riding. 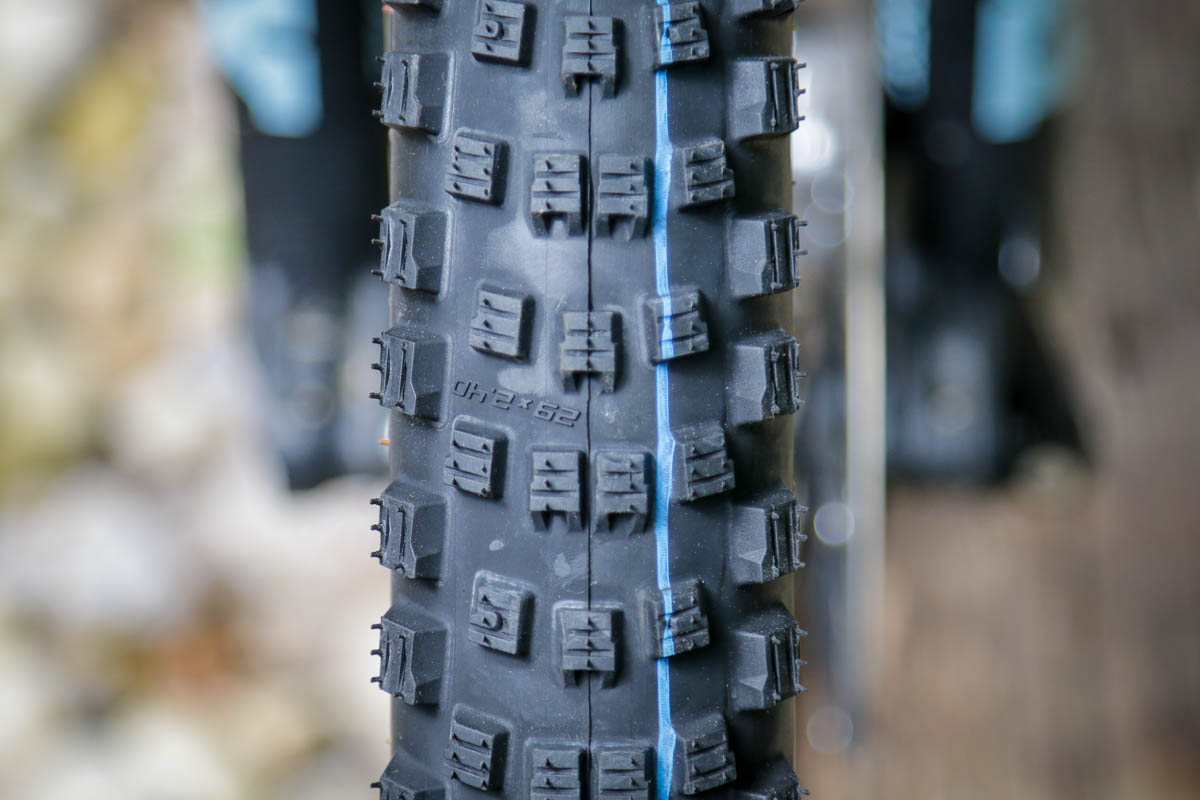 How did they do it? Schwalbe says the secret is in the “semi-ramp” knobs. The center tread blocks are ramped, but those ramps are interrupted. Meaning that there is a gap between the two ramp edges. This still allows for a fast rolling, ramped tire, but when you’re leaning the tire over, those interrupted ramps provide added lateral grip.

The tread design also features heavy siping on every tread block. This gives you as many working edges as possible, again enhancing grip for acceleration, braking, and cornering depending on the angle of the siping. 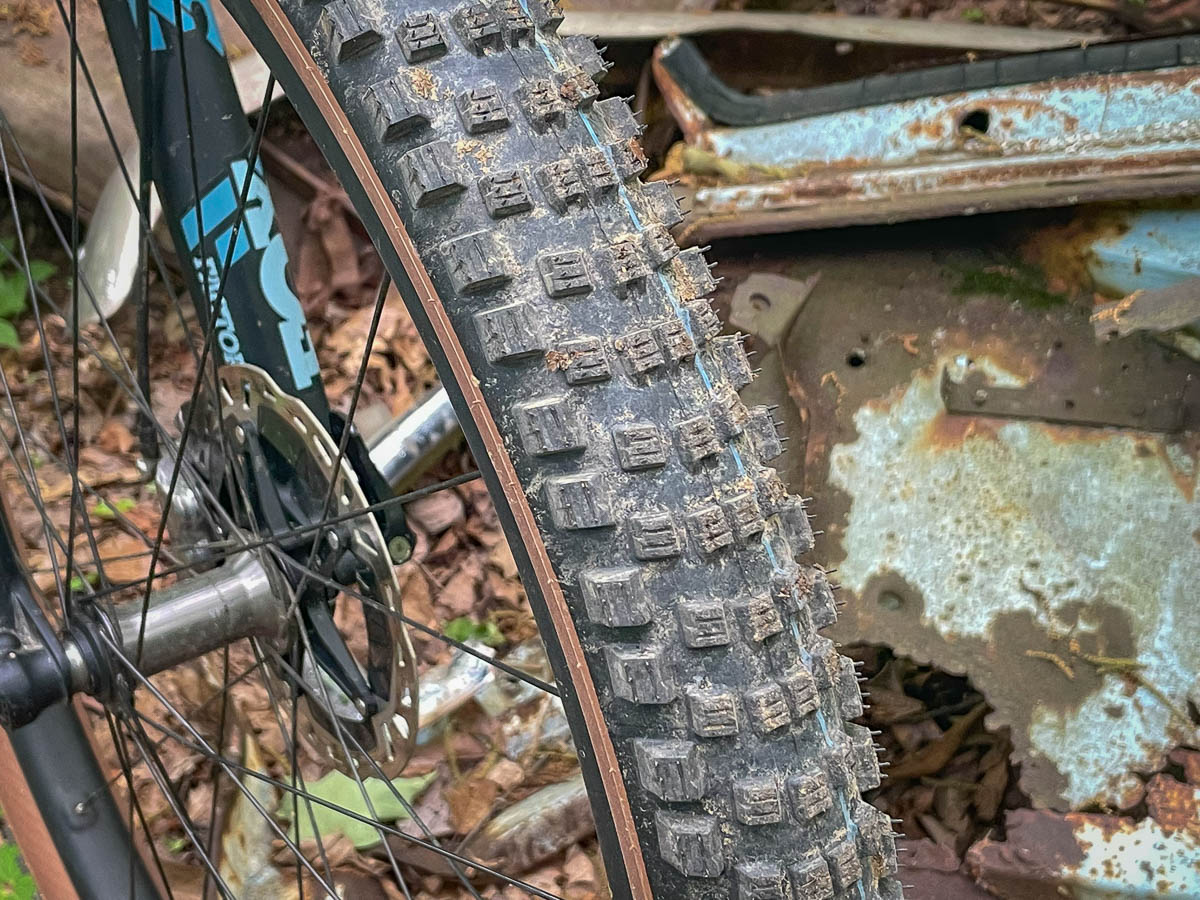 Finally, the shoulder tread blocks are said to be DH-inspired providing ideal support and grip in hard turns.

Wicked Will Casing options based on your needs 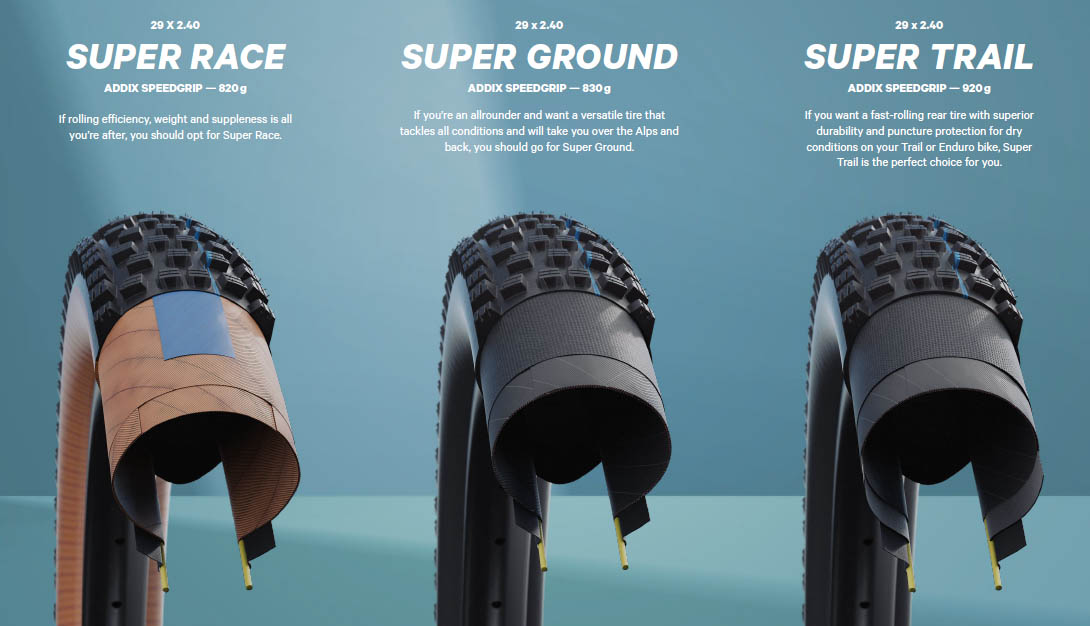 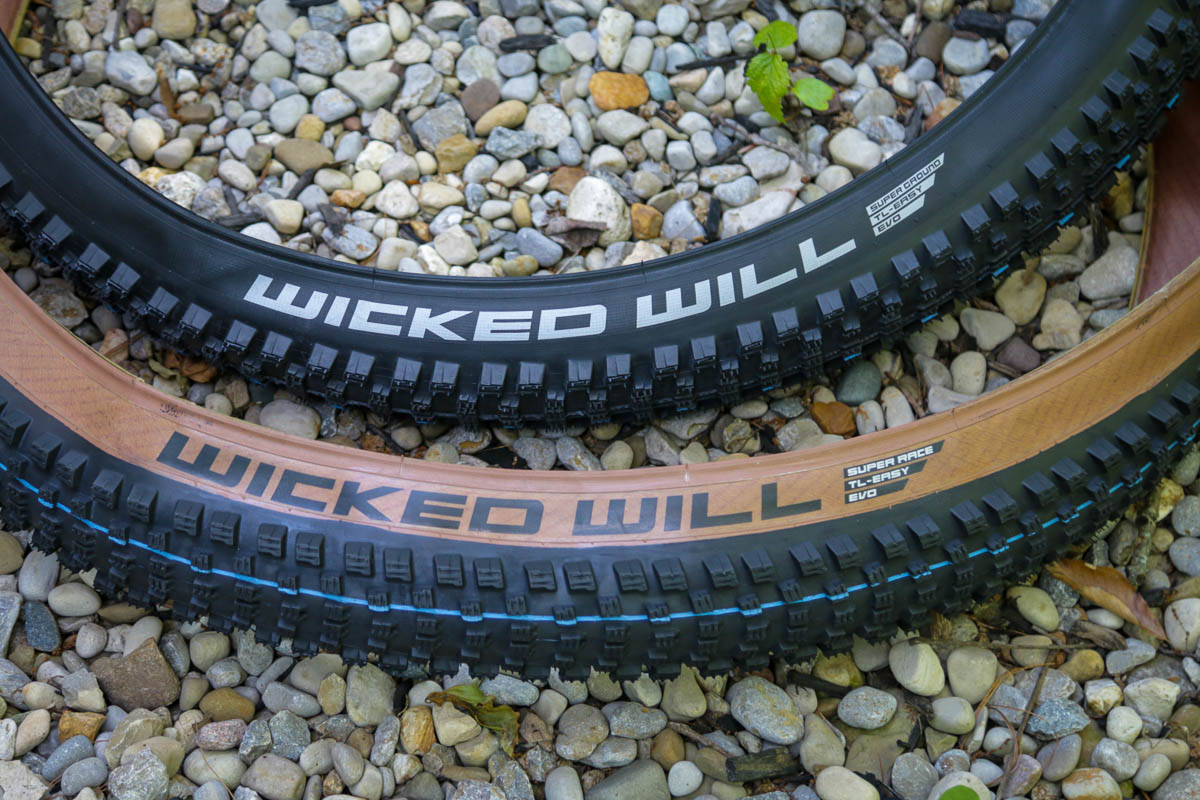 Riders looking for the lightest, most supple tire will want to go with the Super Race edition with a claimed weight of 820g for a 29 x 2.4″.

Those who want more puncture protection but still want a lighter tire should opt for the Super Ground casing which bumps up the claimed weight to 830g for the same 29 x 2.4″ (in reality, the Super Ground is heavier, see below).

Finally, the Wicked Will could make an excellent rear tire in dry conditions when paired with something like the Nobby Nic on a longer travel bike. In that case, you should go with the Super Trail casing which has a claimed weight of 920g for the 29 x 2.4″. 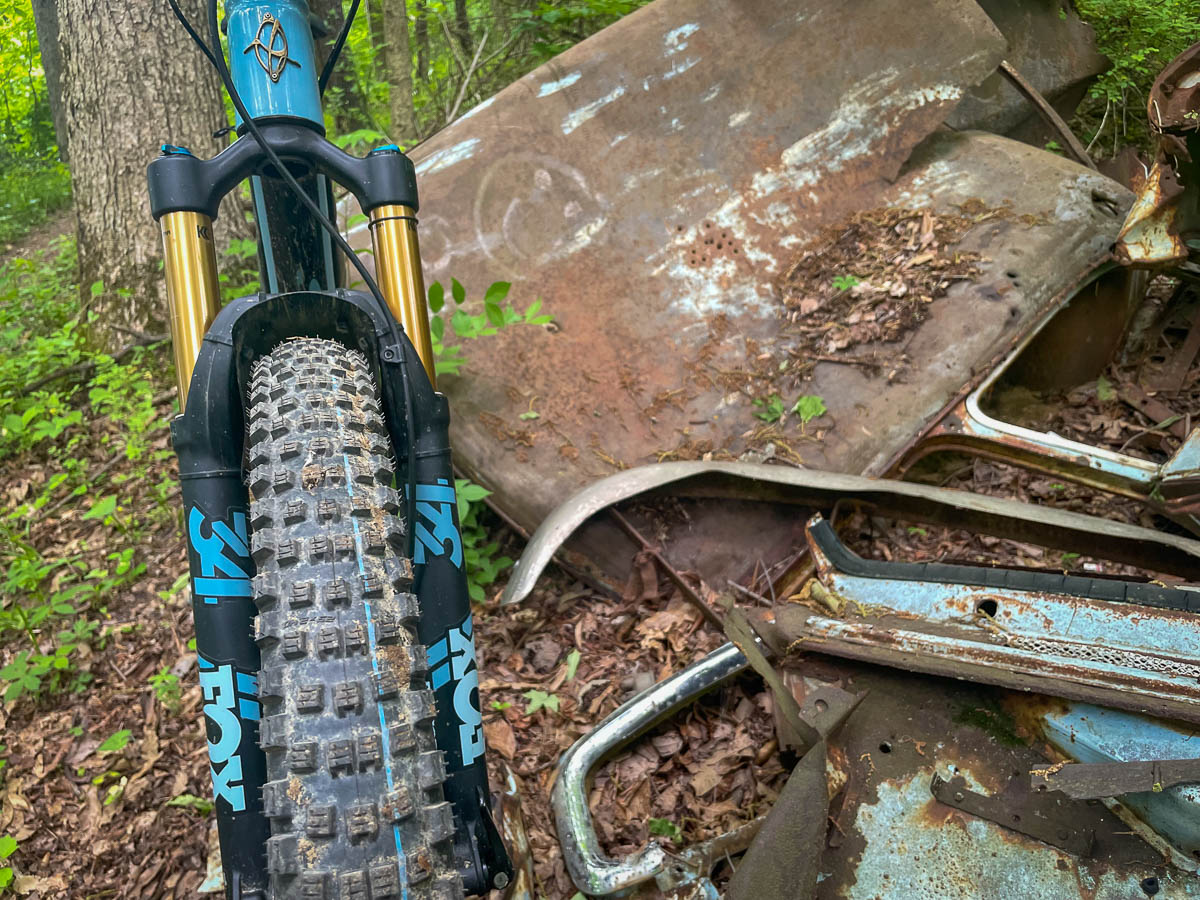 All of the tires use their Addix Speedgrip rubber compound which is characterized by the blue stripe down the left side of the tire. This is their “universal compound” which is ideal for most XC/Trail/AM applications.

Schwalbe sent over two sets of Wicked Wills – one in Super Race, the other in Super Ground casings. The Super Race tire with its ‘Transparent’ sidewalls actually came in under claimed at 816g. The all-black Super Ground tire however weighed more than claimed at 895g. Still, that seems like a worthwhile weight penalty for someone looking for added puncture protection – it’s still pretty light for a 29 x 2.4″ tire (especially for something with real tread and puncture protection). 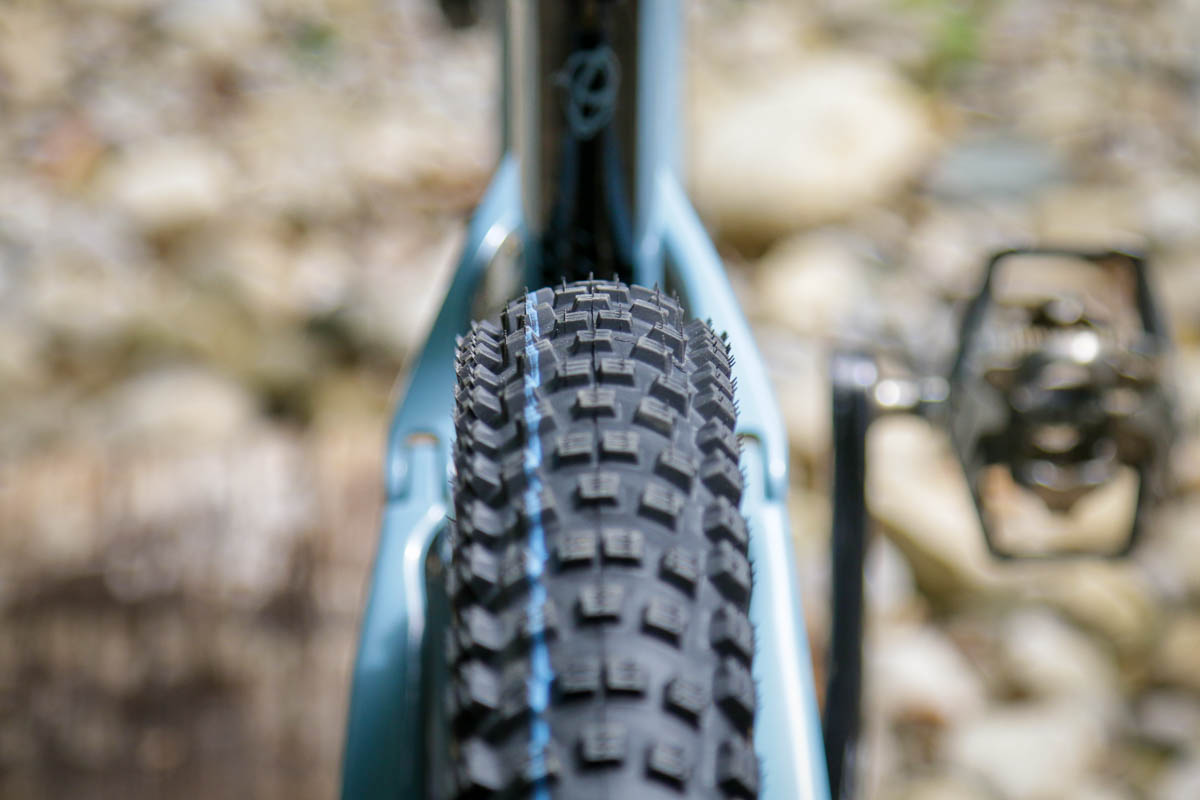 As usual, our first impressions of any new tire start with the installation process. Schwalbe tires seem to be consistently air tight and easy to mount tubeless, and the Wicked Wills are no exception(they call it TL-Easy for a reason). The Super Race Wicked Wills were easy to mount by hand, and popped right into place with little effort. After the initial mounting, I usually hang the wheels overnight and check back the next day to see if there are any slow leaks which can be indicative of imperfections in the tire bead. Fortunately, the Wicked Wills showed no signs of leakage and were still at the same pressure – and ready to rip.

Mounted to a pair of Santa Cruz Reserve 30 rims with a 30mm internal width, the tires haven’t quite reached their 2.4″ potential, measuring 2.33″ wide. They seem to offer a nice, rounded profile, with the shoulder knobs positioned well for railing corners. 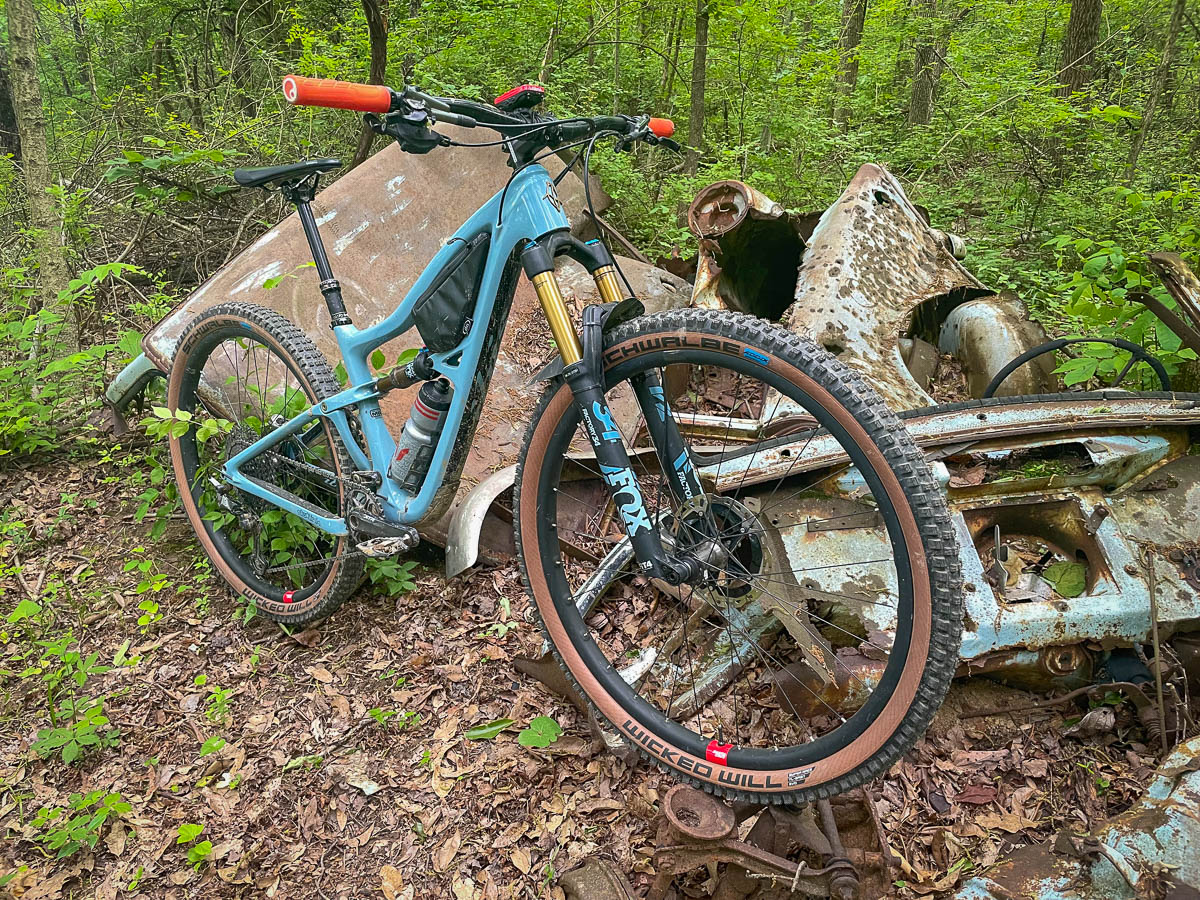 My very first ride on the Wicked Wills was on a trail I ride all the time, and it ended up being my best ride in months, if not years. Coincidence? Probably. But there is no denying the fact that these tires make you feel fast and confident. We’ve had a ton of rain lately, which meant that even when the trails are “green”, there are still plenty of slick spots to be found.

Based on the lack of any significant rock on our trails and my tendency to ride fairly smoothly, I mounted up the Super Race casings first. My first experience with the Super Race casing on the new Racing Ralph/Ray led me to expect an extremely supple ride. Delivering on that promise, the Super Race Wicked Wills feel impressively smooth over trails that are spider-webbed with roots. 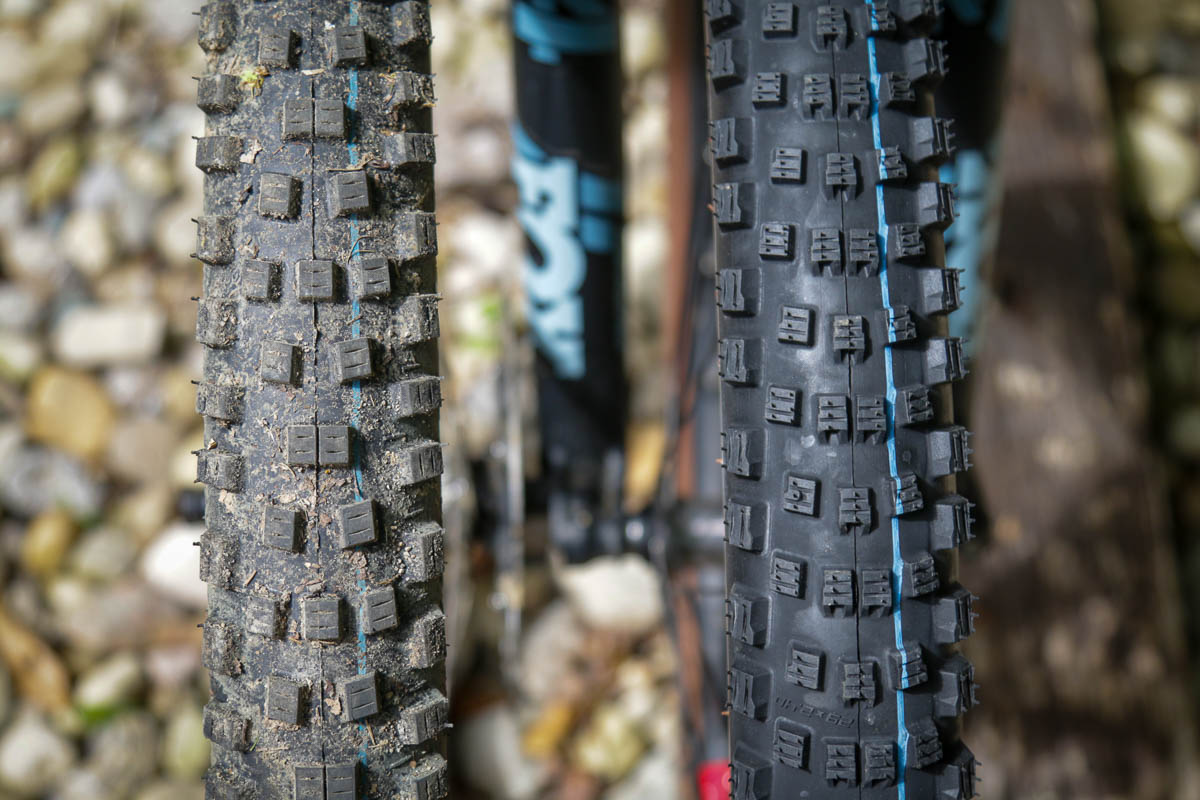 Overall, the Wicked Will has an impressive level of grip, but I could see certain riders wanting more – at least out of the front. I couldn’t help but think that the Wicked Will would make an awesome rear tire combined with a Nobby Nic up front for even more aggressive riding. Comparatively, the Nobby Nic offers taller tread blocks with more spacing in between, and without the semi-ramping.

Well mannered on the trail, the Wicked Wills feel fast and light, eager to change direction. Starting off at 24/24.5 psi (which is what I run the Super Race Racing Ralph/Rays at), I noticed a few instances of the tires struggling for grip. After a few quick taps on the valves, the pressure change of a few psi made a world of difference. I didn’t have my pressure gauge on me at that point, but whatever PSI I landed on was magical. The tires were hooking up everywhere, whether a hairy technical climb or greasy, root infested chute.

I had one instance where I lost the front end, but I don’t think any tire would have saved me. It was one of those times when a poorly placed front tire hit a slimy root at just the perfect angle, and it was like landing on an ice cube. Otherwise, the tires are very predictable, signaling when they’re about to break loose. 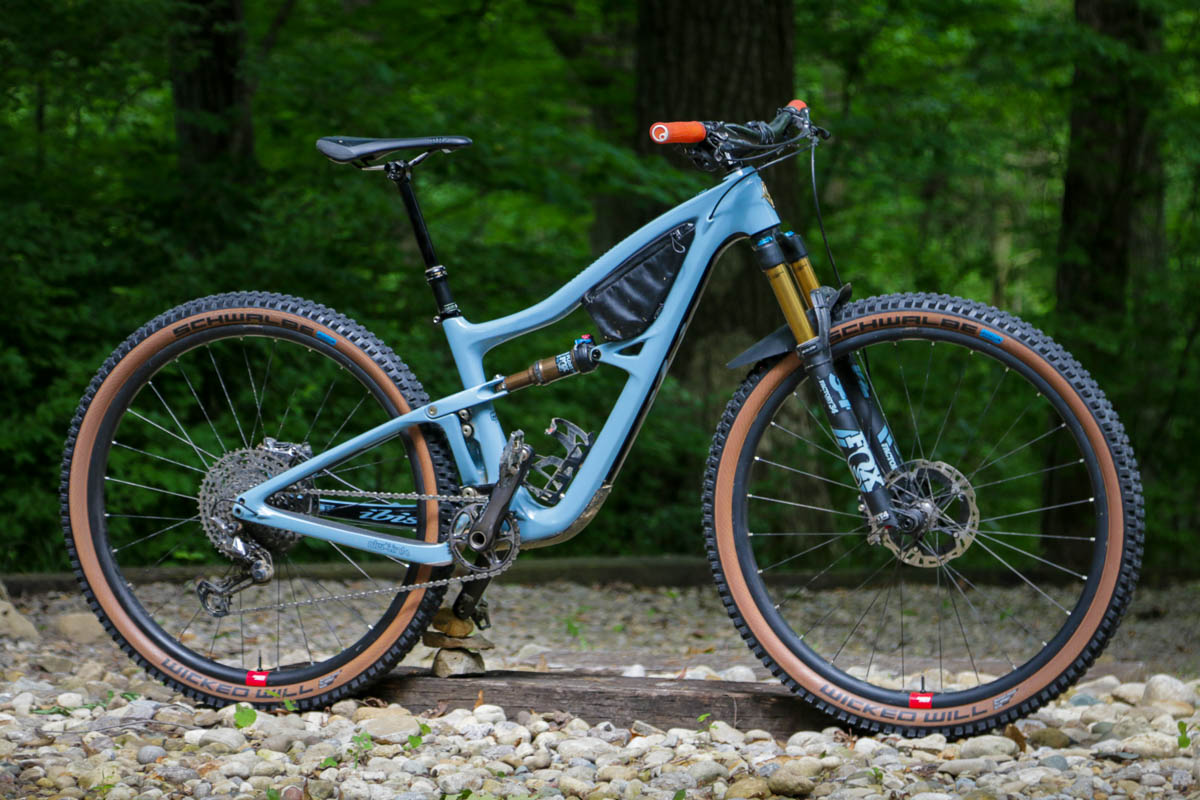 There are a lot of tires that would fall into this category lately, but for me the new Wicked Will would have to be near the top (and will stay on my bike). It feels extremely quick for a tire that offers this level of confidence. When combined with the multiple casing options, and the impressive weight of the Super Race tires, the new Wicked Will is absolutely worth a look.

Unfortunately, like Rob Warner, you’ll have a hard time getting your hands on some until the “first quarter of 2022.” Which is a bummer, but given the state of bicycle and component inventory and availability across the globe, it’s not all that surprising.

Once they are available, you’ll find both 27.5 and 29″ tires in 2.25, 2.4, and 2.6″ widths – though not all styles will be offered in all sizes. All of the Super Race, Ground, and Trail tires (everything shown above) are part of the Schwalbe Evolution line and will sell for $94.99 a piece. A more affordable Performance Line with TwinSkin TLR casing will also be offered at $65.99 each.

Tread looks similar to the old Racing Ralph (prior to the Racing Ray) which I loved. Looking forward to this one

Too bad it doesn’t come in 27.5. I would like this as a rear tire it looks like it would have better grip than an aggressor for similar rolling resistance and good cornering knobs.

Ahh missed that thanks

“Mounted to a pair of Santa Cruz Reserve 30 rims with a 30mm internal width, the tires haven’t quite reached their 2.4″ potential, measuring 2.33″ wide.” <— in typical schwalbe fashion. Not only they come in overweight, but undersized for sure.. That's ridiculous for 30mm IW rims..

2mm is within the tolerance of tire construction, I’m sure.