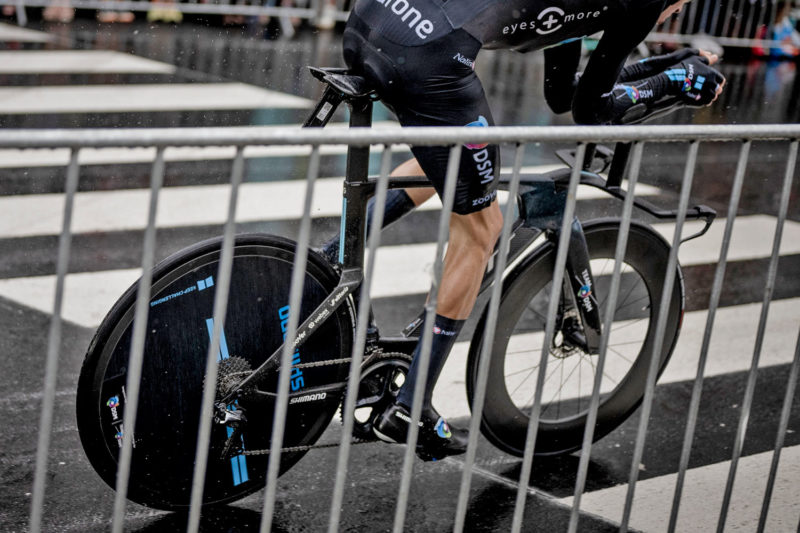 Scope has a super-fast pairing of Algorithm Enhanced Aerodynamics time trial wheels with their new AEA Disc & R9.T, ready for today’s Tour de France départ. Developed in the wind tunnel and out on the road with DSM, this new wheel pairing promises a new benchmark in aerodynamic performance solo against the clock with modern wider tires and disc brakes. 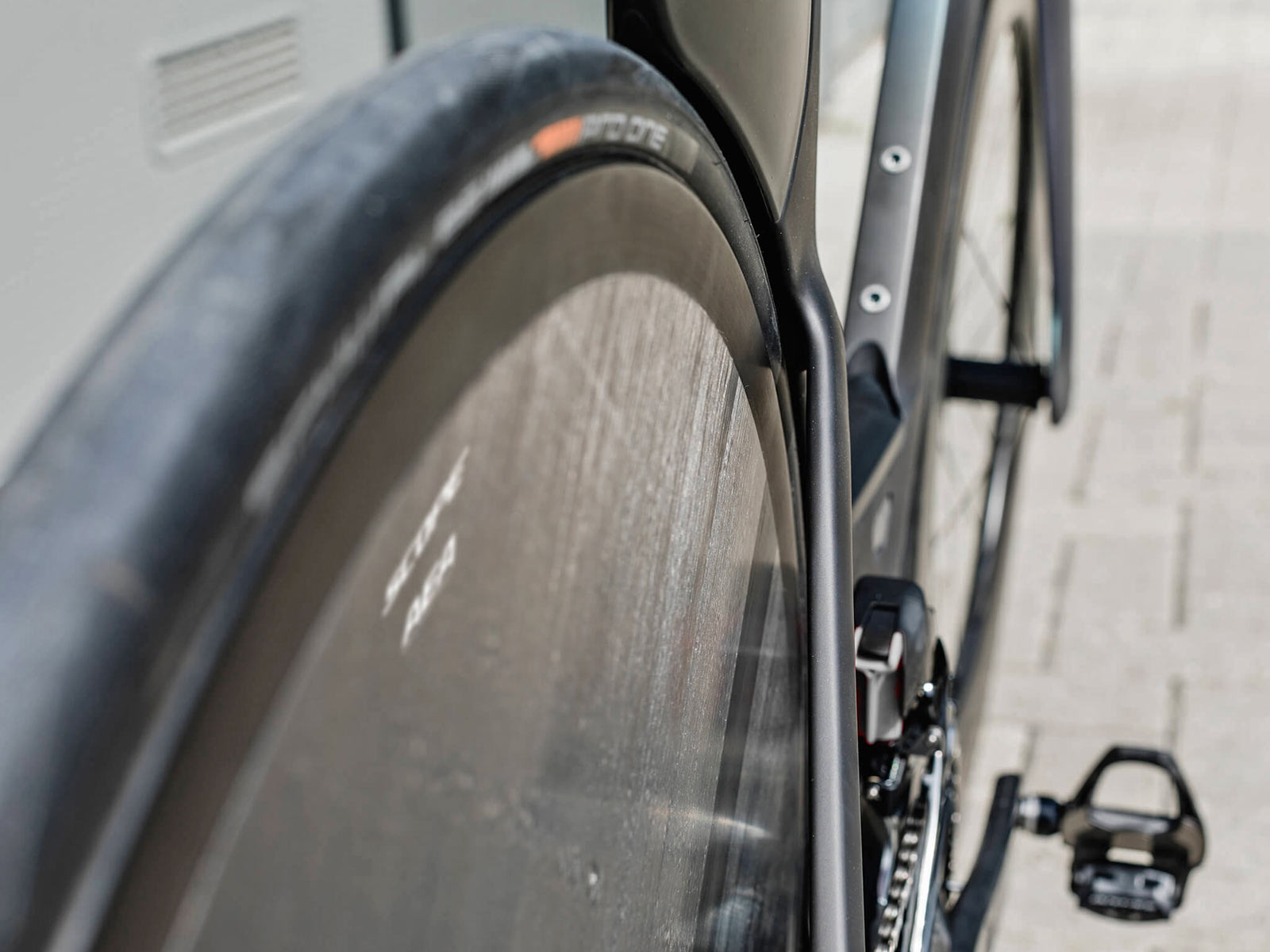 Interestingly, together with Eindhoven & Deft Universities of Technology and tire-maker Schwalbe, one of Scope’s big development partners for their Algorithm Enhanced Aerodynamics AEA projects is DSM. Technically not the Team DSM of pro cyclists, but the Dutch science & engineering company Royal DSM N.V. that sponsors the pro cycling team. 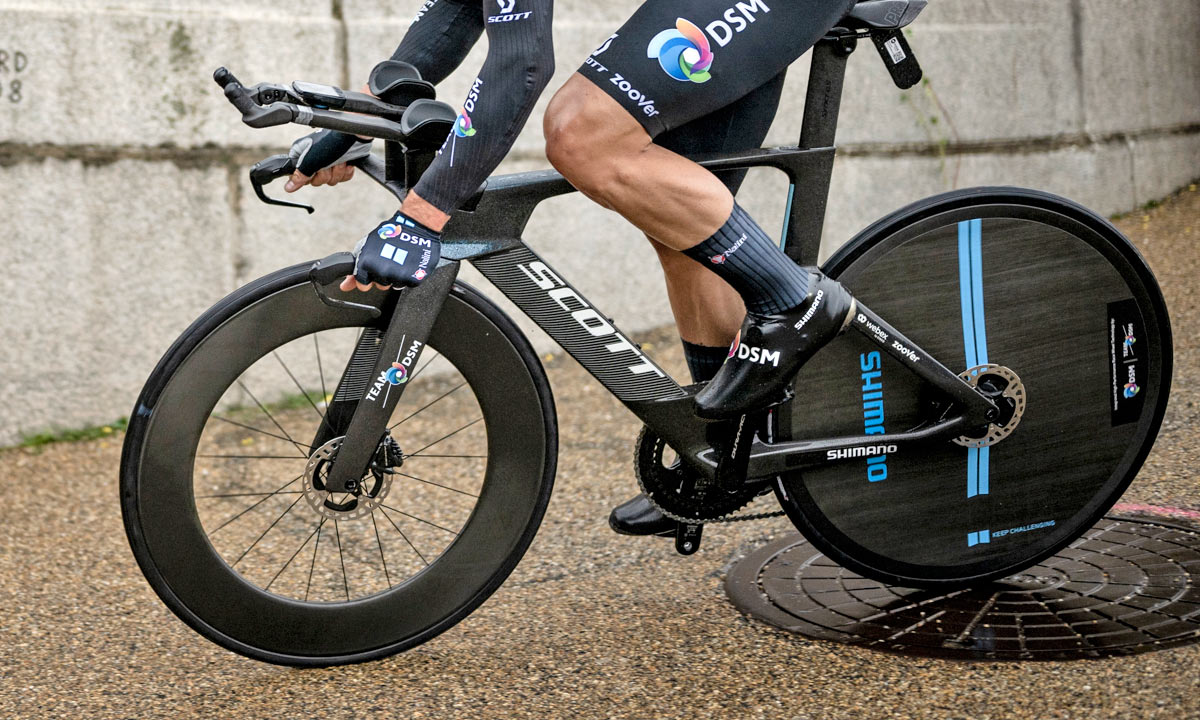 Scope is a “Supplier Partner” of Team DSM, but not one of their main sponsors, and the team most often races on Shimano wheels. 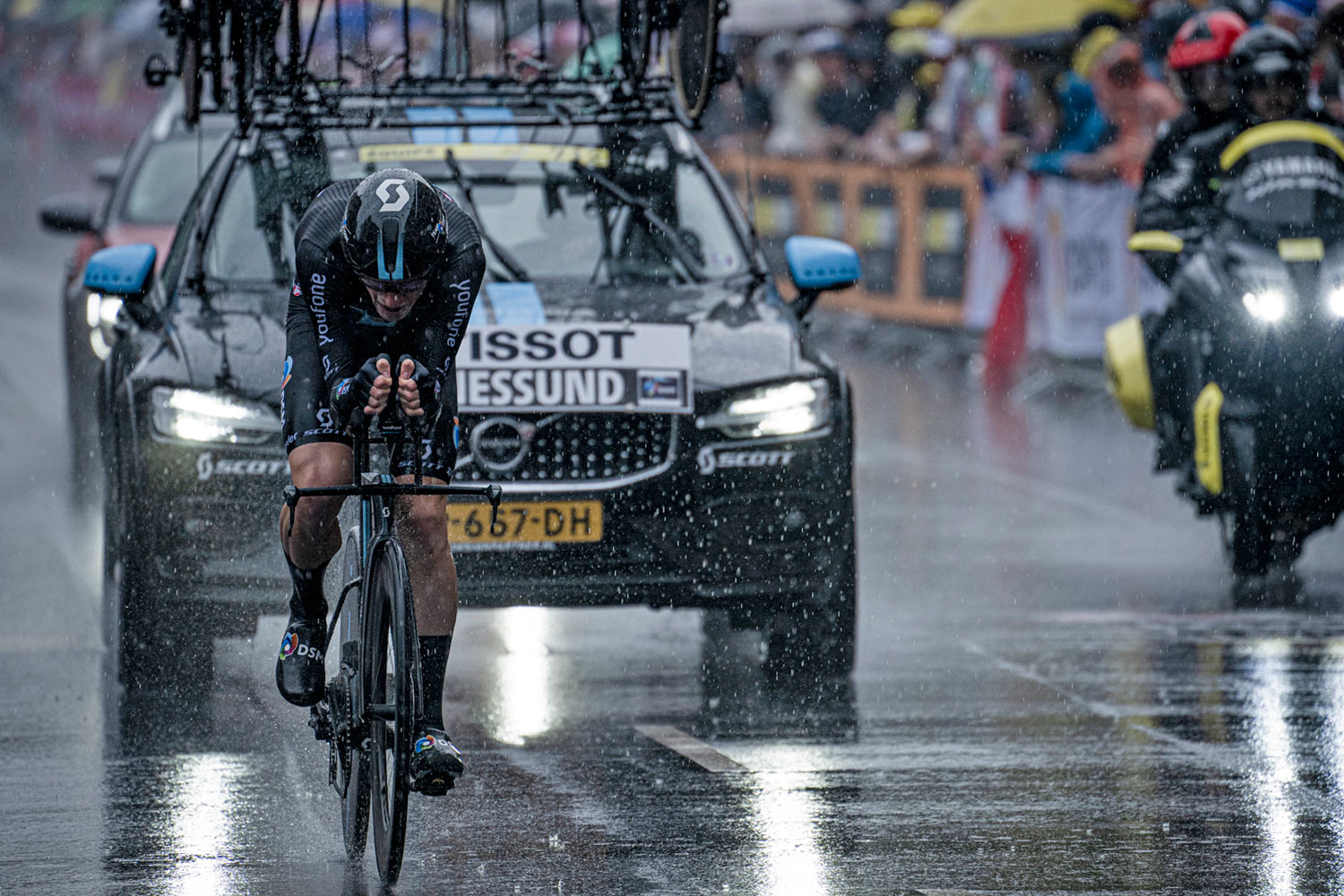 But today for the Individual Time Trial that starts the 2022 Tour de France in Copenhagen today, the team did appear to be racing on these new Scope AEA wheels… 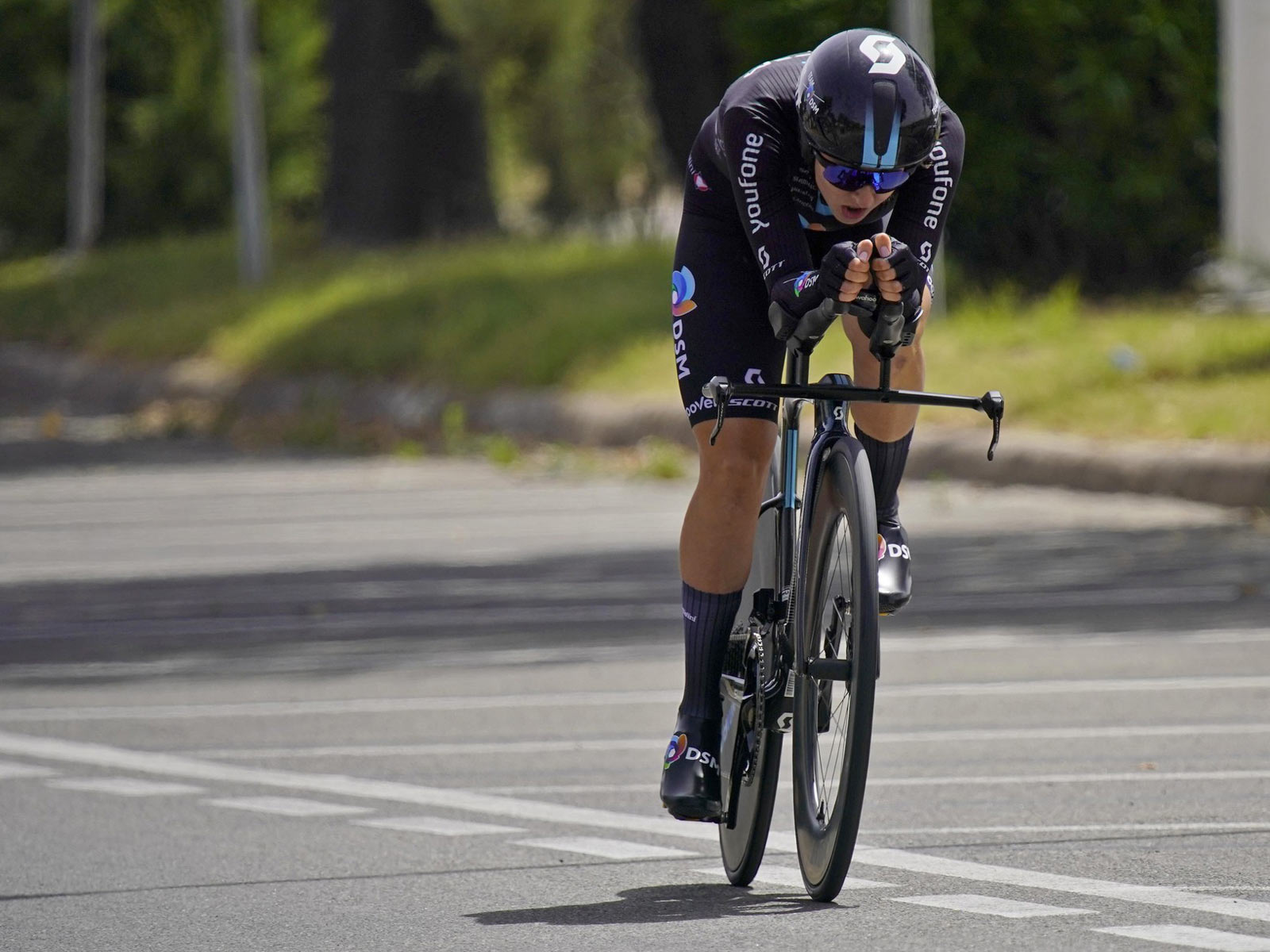 …like some of the DSM women may have done at the Giro Donne prologue, as well? 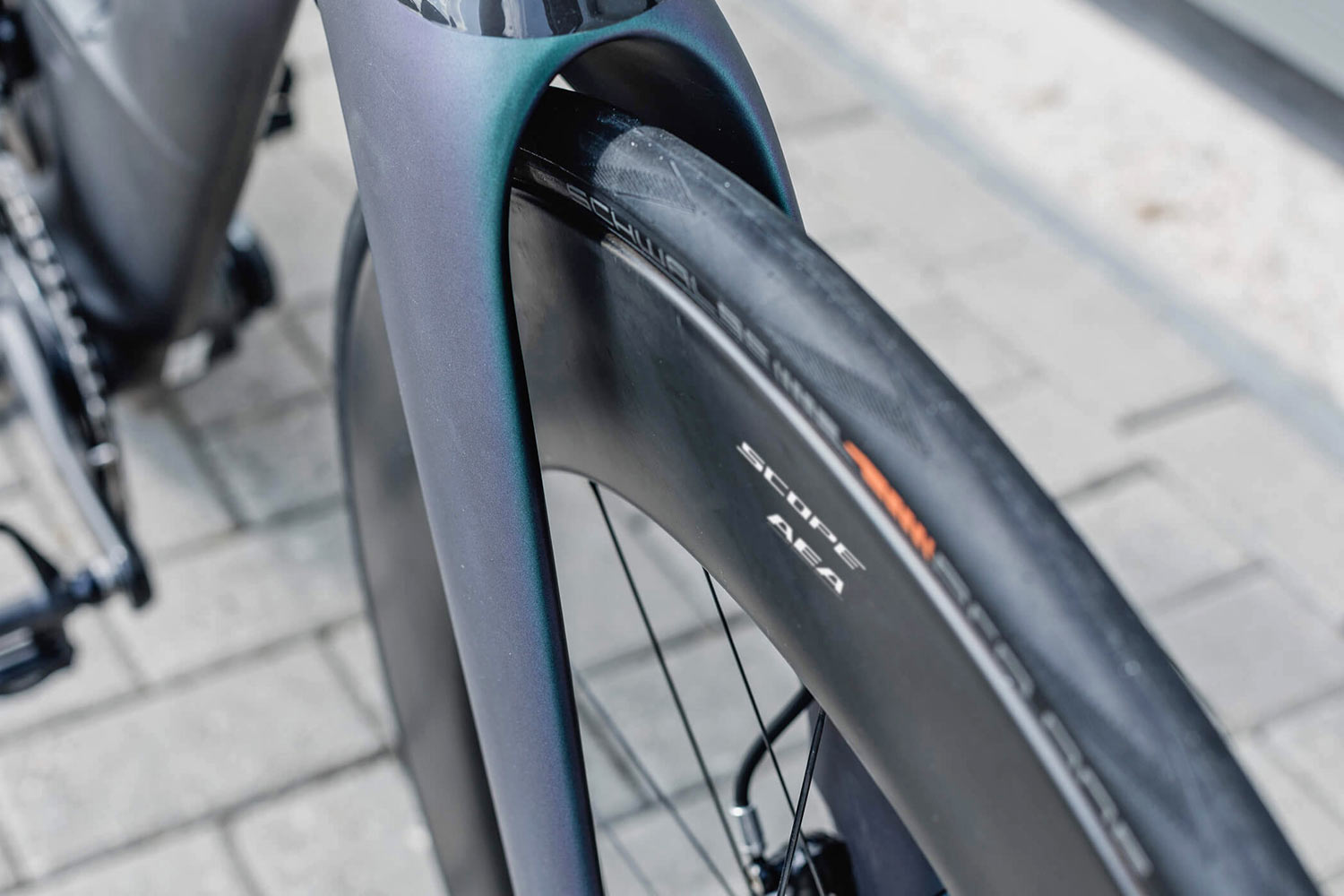 Scope introduced us to their algorithim-designed concept over basic CFD last spring with their latest all-road & road wheels. The general thinking is to start with the tire size & tire profile they want, then input the projected wind chareectueristics, and let the computer work back from that to create the most aero profile below the tire. 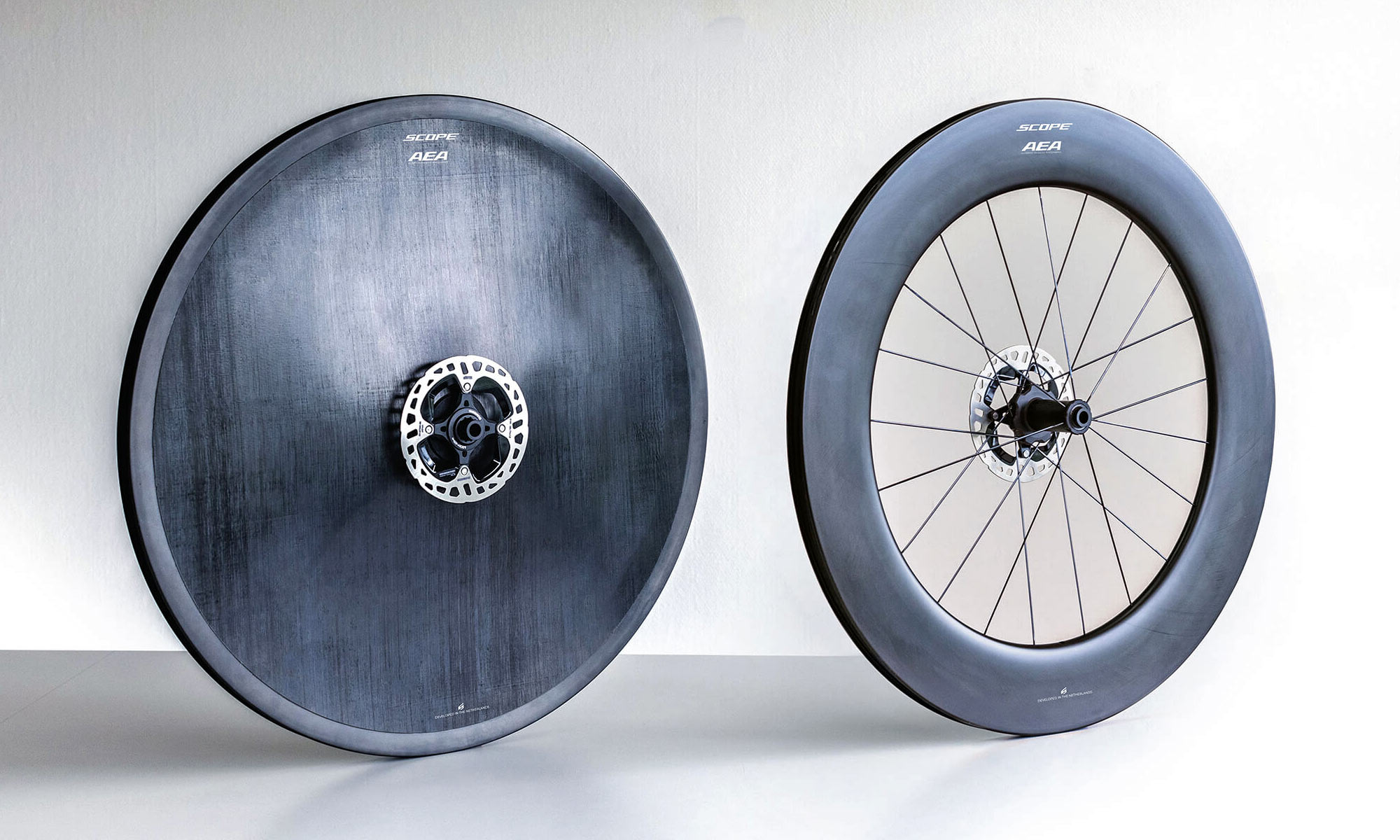 Scope says the project used actual TT data collected from 2017-2020 at the 25 key Grand Tours & World Tour races by a “World Tour Team”. We’ll leave it up to you to guess which 3-letter team they are referring to. Five years in development, this time trial & triathlon aerodynamics project has now yielded a faster  Disc TT & deep-section R9.T wheel. 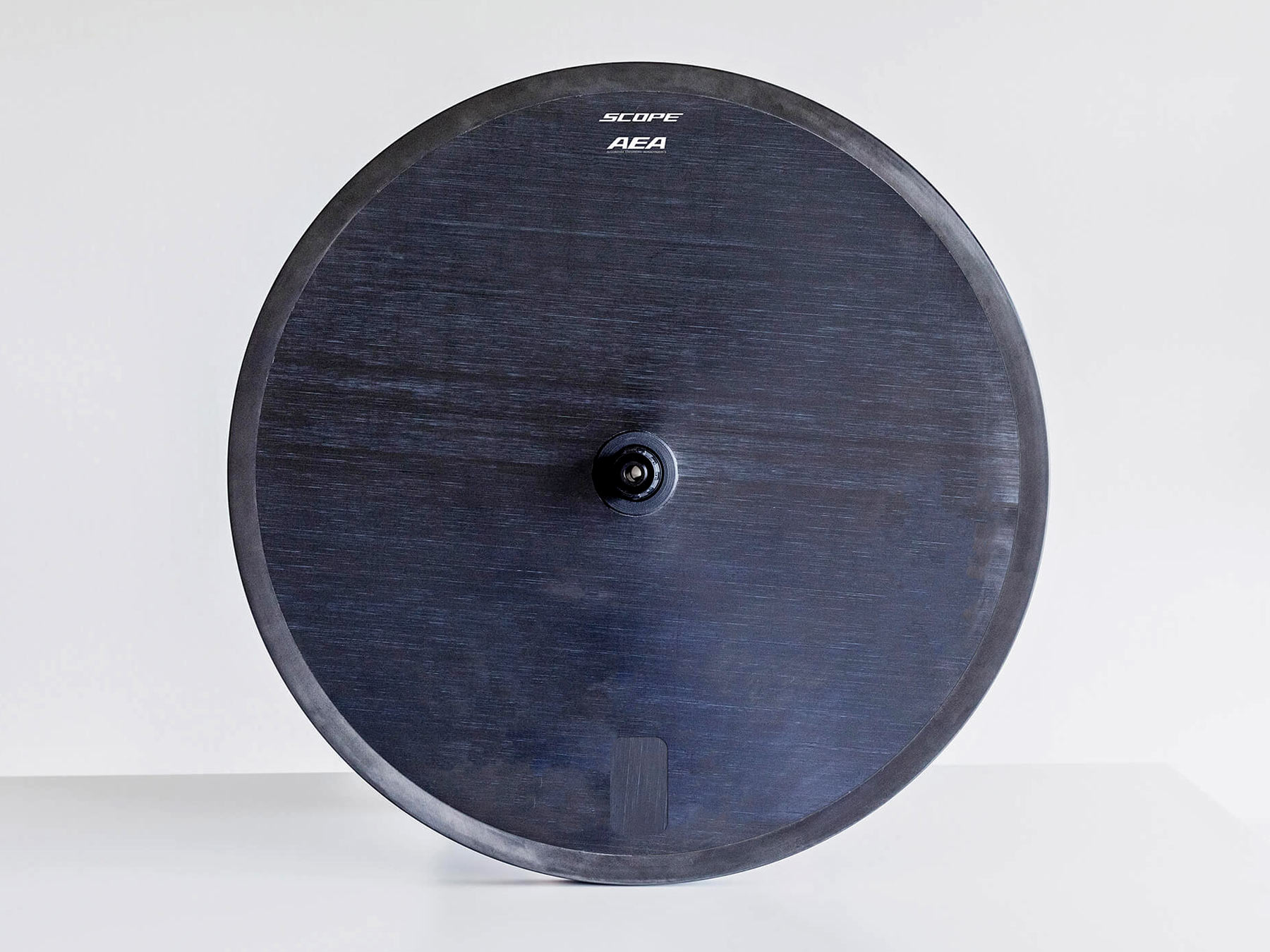 The Scope AEA Disc is a tubeless carbon disc brake TT disc wheel with a 21mm hooked internal width and 28mm wide at the rim. 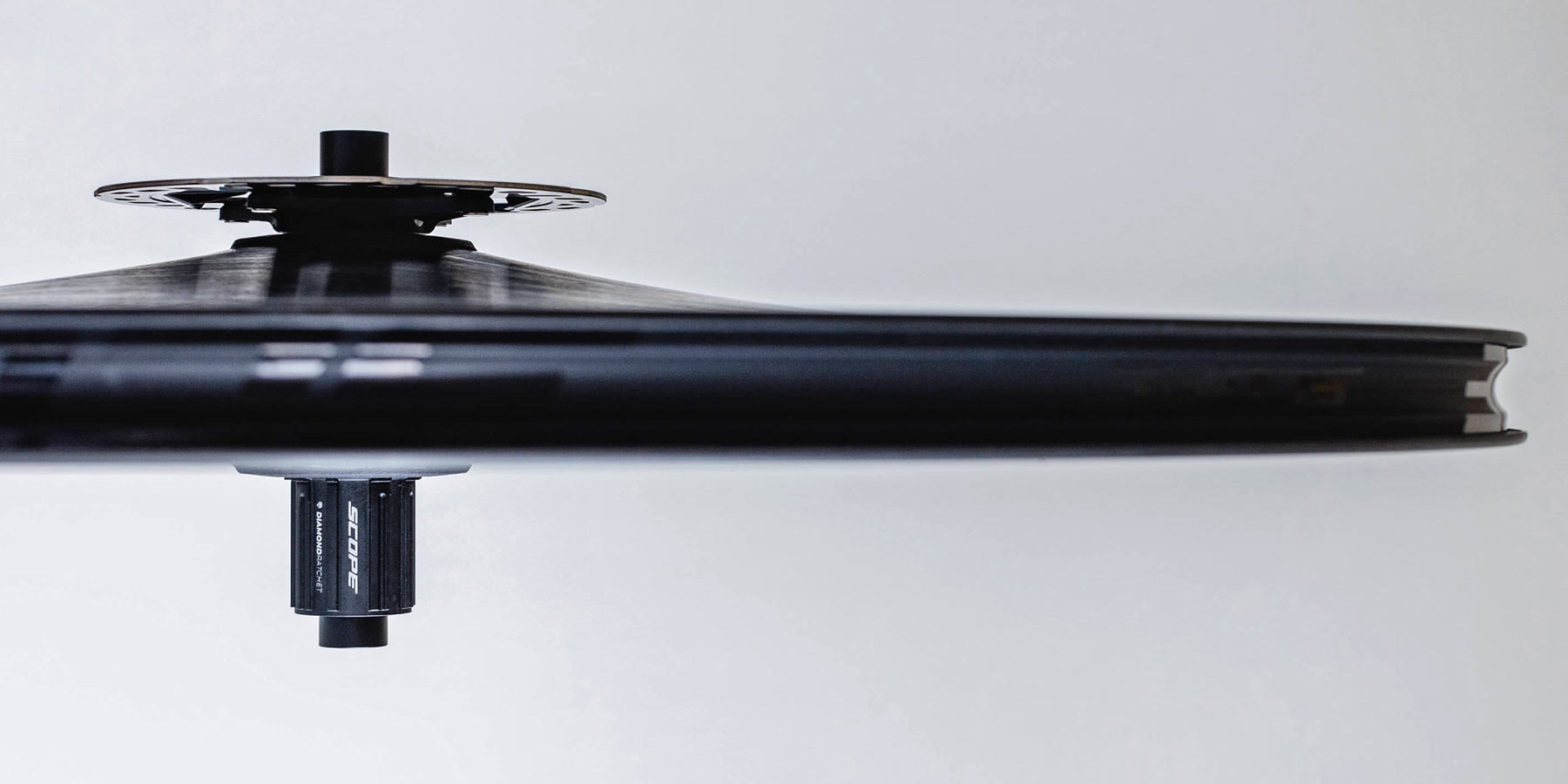 The disc wheel is built around an alloy Scope centerlock disc brake hub with 12mm thru-axle & ratchet internals, compatible with all Shimano, SRAM & Campagnolo groupsets. And it appears to have conventional Sapim Laser spokes inside its aero shell. The wheel spins on CeramicSpeed bearings and has a claimed​ ​weight of 1196g. 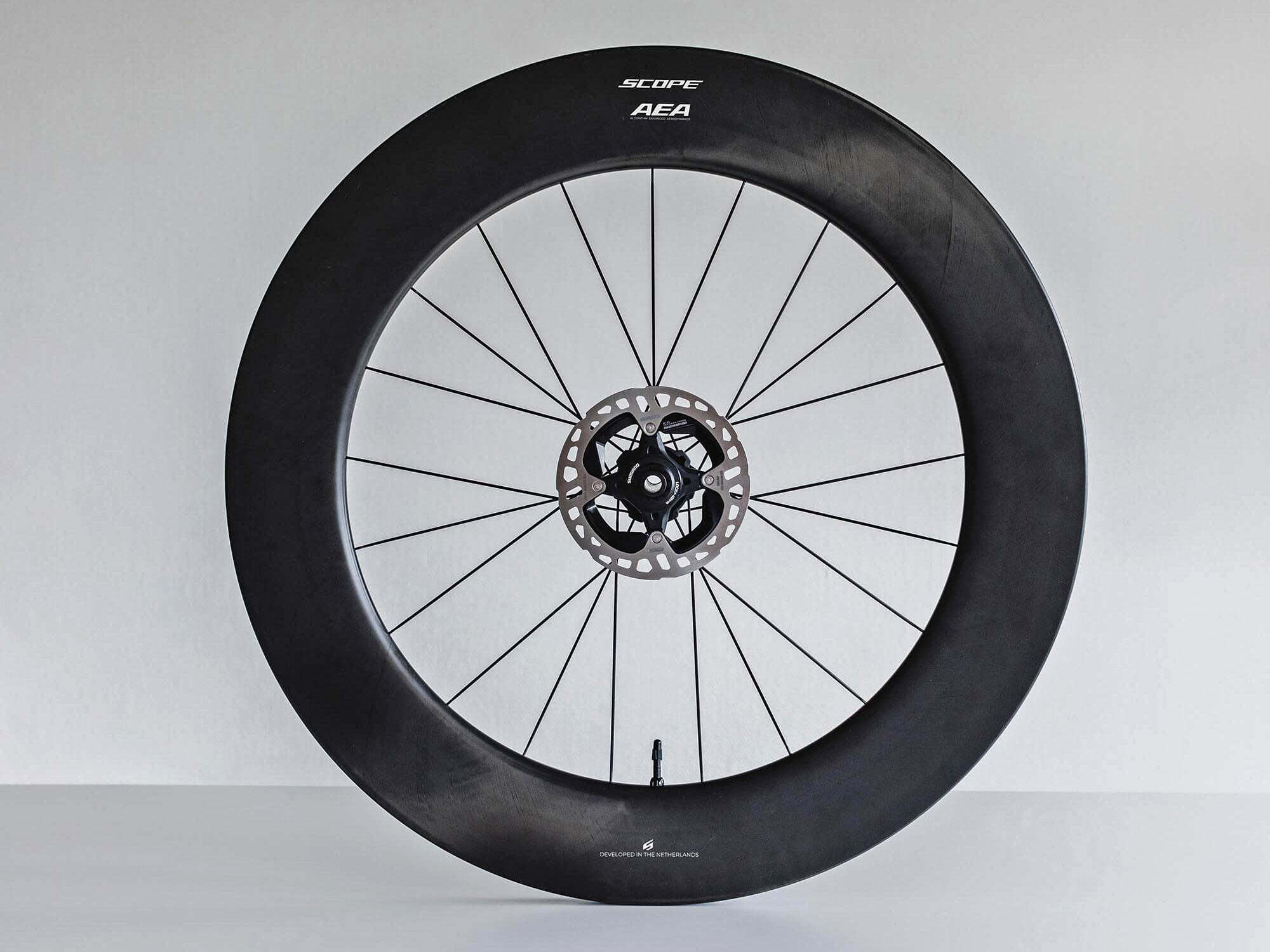 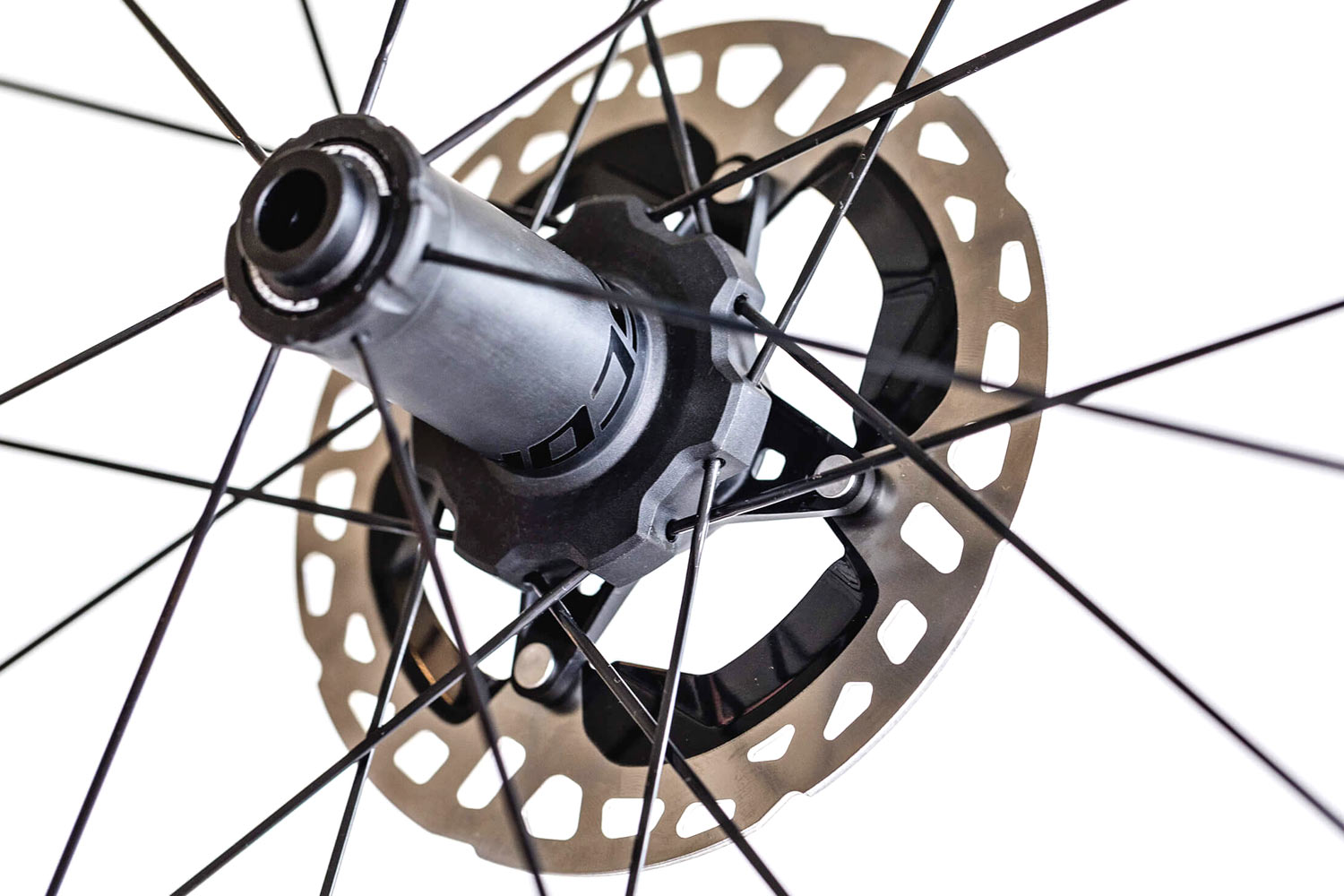 It has a narrower 19mm inner wdth, 26mm external, and an 88mm deep blunt aero rim profile featuring local reinforcement at the spokes. The wheel is built up with Scope’s straightpull centerlock hubs and Sapim CX-Ray spokes for a claimed wheel weight of 887g. 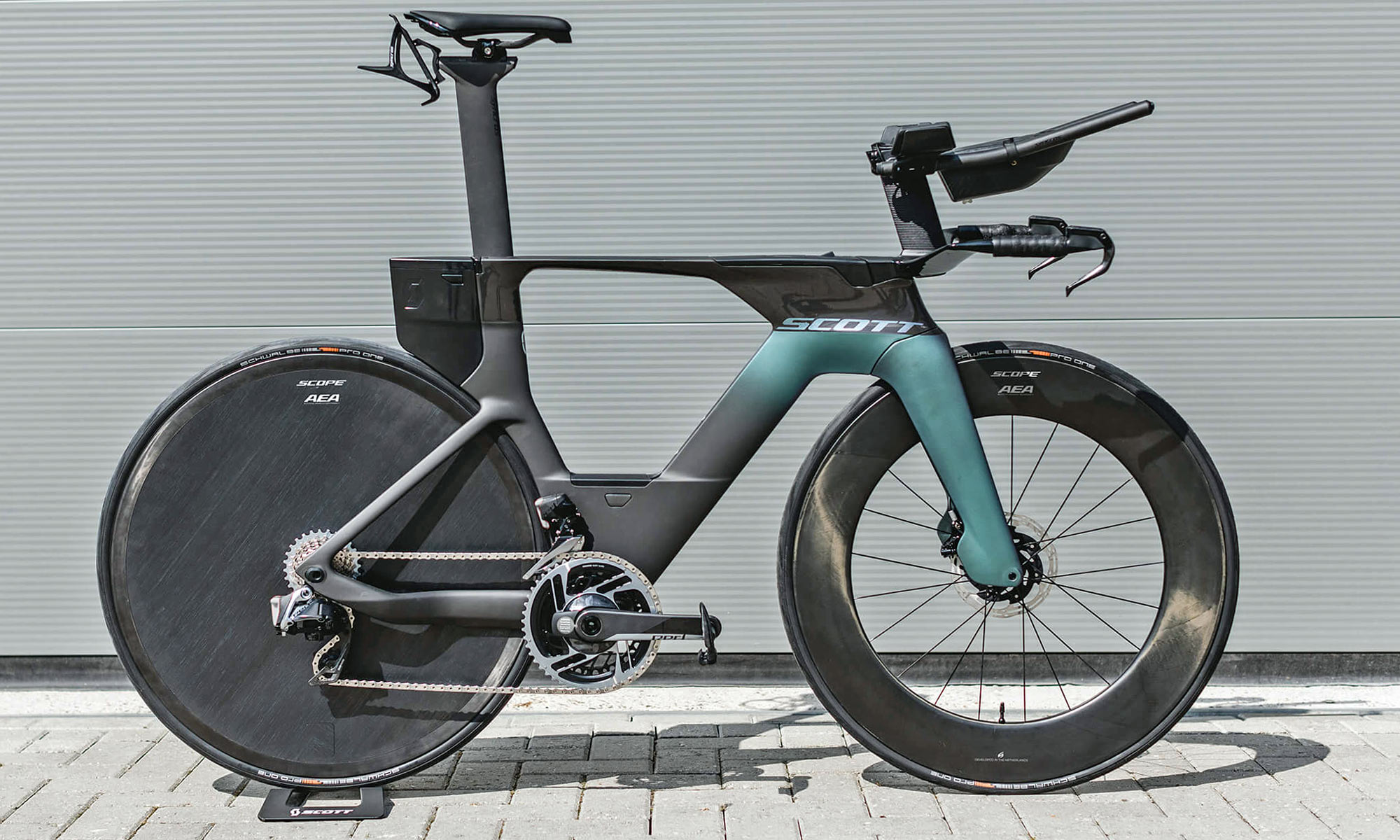 This first generation of Scope AEA Disc & R9.T wheels are both made by hand in the Netherlands, which means they are available in more limited numbers and are quite a bit more expensive than most Scope wheels. With that said, Scope is continuing to develop the pair, and expects to put them into larger scale production next year. 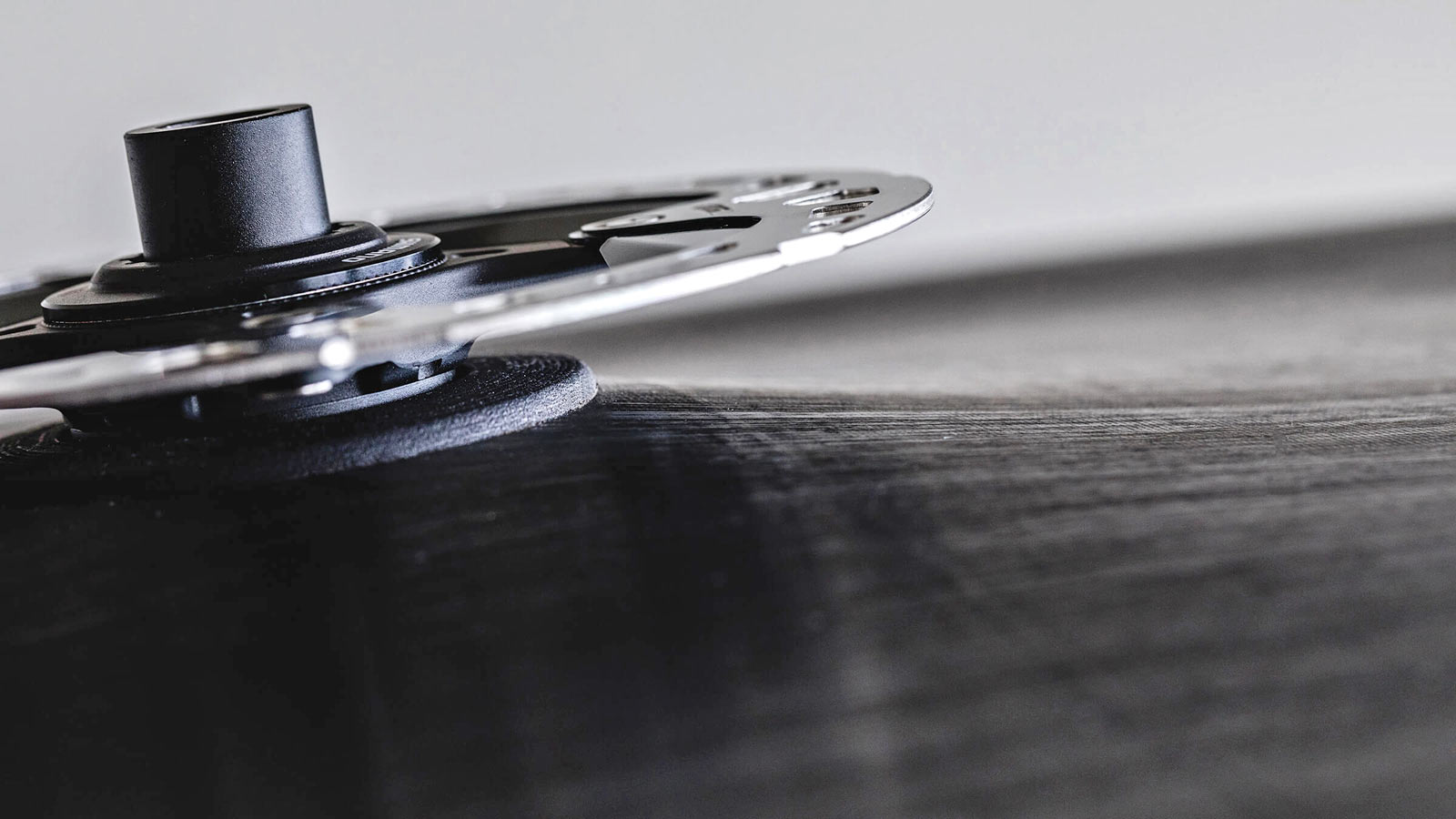 The AEA Disc rear wheel sells for 2198€ with your choice of freehub to suit any modern drivetrain.  The R9.T sells for 998€ for the front wheel only. Both have no rider weight limit, with recommended tubeless tire width of 25mm rear, 28mm front. Contact Scope here to place an order.

First, I have to believe that the “25mm rear, 28mm front” tire suggestion is backwards.
Second, shame on you for publishing a graph with no values on one axis.