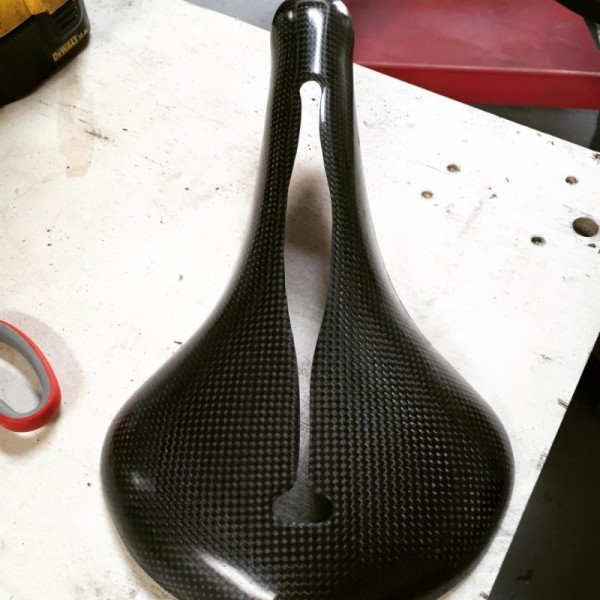 Carbon saddles are extremely light, but most of them fail to deliver on the comfort side of the equation. Sure, you probably have at least one friend who swears his one piece carbon saddle is as comfy as any padded variety out there, but for the majority of riders they usually won’t cut it.

That seems to be why Selle Anatomica is partnering with composites experts and the University of California San Diego on a new project. Together, the team has set the goal of creating the “world’s first truly comfortable, ultra lightweight saddle with leaf spring damping.” If you’re not familiar with Selle Anatomica, they’re the company that has been making leather saddles in Wisconsin since 2007 with or without their iconic cutout. Using the knowledge they’ve gained from creating leather saddles, and the composites know how of their partners, the finished saddle should be leather-comfy and carbon-light… 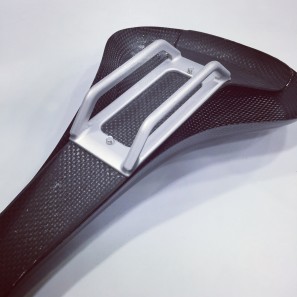 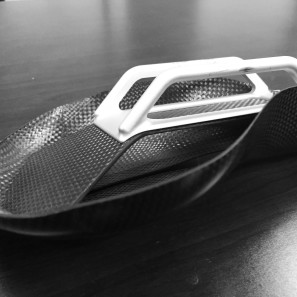 Even without the cutout, the carbon saddle should get some built in comfort through what Selle Anatomica is calling a carbon leaf spring. Running from one end of the saddle to the other, the titanium rails will be attached to this carbon plate allowing the sides of the saddle to flex on each pedal stroke. Claiming to be working on an industry first comfort algorithm that will be used to mimic leather’s performance and translate it into a usable carbon layup, the saddles will also include Selle Anatomica’s Flex-fly slot for additional give to the saddle cover. Projected saddle weight is less than 200g, which if true would be more than 300g less than their leather options.

Currently in the prototype phase and being tested in UCSD’s composite engineering department, Selle Anatomica is offering the first run of saddles through a crowdfunding program. However, the company seems to be sidestepping the traditional Kickstarter or Indiegogo options and instead running the crowdfunding effort right out of their own website. Estimating a retail of $300-400, backers can pledge for a saddle at $199, or a carbon saddle later and a leather saddle immediately for $299. Backer’s saddles should be delivered by Interbike with production models expected in 2016.

You should do a piece on JURE BERK and see what this amazing talent has been building in regards to carbon saddles. I have a carbon saddle/post combo that is amazing and comfortable and will be purchasing a new saddle from this builder.

He does a tone of amazing work in carbon and honestly do not know why you have not done a feature on this incredibly talented builder.

These guys while having been in business for years are years behind what Berk is doing.

His saddles are below 100g and for under 200g you get the post and saddle together.

+1 for Berk, amazing work going on there. I saw his frame/post/saddle combo (ALL ONE PIECE) on his blog. Absolutely amazing.

@bmanx – you know Bikerumor has a section where you can “Submit Tips”?

As for the saddle in the first picture, that cut-out looks terrifying. All it would take is one slide back or forth on the saddle and you might be running a 1x for the rest of your life.

My leather SA saddle turned touring butt agony into — well — not ecstasy, but not uncomfortable either. The hammock suspension is clearly part of this, but so is the localized compressibility of the leather shell. Be interesting to see if they can pull it off.

Saddles are such individual things. Everyone’s sit bones are different. Even individual bike geometries make a difference (I literally went through a half dozen saddles before I found the right one for my gravel bike, which is completely different than the saddle for my road bike).

I just don’t see how crowdfunding saddles is going to work, with no way to demo them…

target weight seems a bit high for a “ultra light” to compete with the already established flex carbon saddles on the market.

also having the cutout so far back will tear up your expensive cycling shorts. jure berk saddles rock!!!!

200 grams? You could literally get a Berk, Trigon, SMP, Italia…hell even a “eBay piece” for lighter and cheaper at retail. Then again, of course those companies really took off of existing shapes, if not their own to workout a design they say comfortable.

Hmm, no SSL on a site when entering CC#s? No thanks.

That’s certainly a disservice to their “backers”… Not a mistake that Kickstarter or Indiegogo would make. I’m sure their credit card processor would not be amused.

@Remi – what are you, riding naked?

My wife purchased one of the original leather Selle Anatomica saddles. It fell apart in 2 tours (less than 1k miles). Leather completely stretched out (hammocked) and the steel rails bent… Selle A wouldn’t stand behind their product. Now they’re trying their hand at carbon? Leather fails slowly, but carbon… catastrophically. Pass.

I dont get it when an established company turns to crowd funding to introduce a new product into their line.
Shouldnt you know the market well enough to go at it alone, and if its successful, great, if not, suck it up.
I always thought that sites such as Kickstarter were there to help kickstart a new product from a new company, I would never contribute to a product from an existing company.

first bump you hit, you slide off it onto the ground.

Dash’s saddles with the integrated post already benefit from the leaf spring effect and they are excellent. He deserves credit for this too.