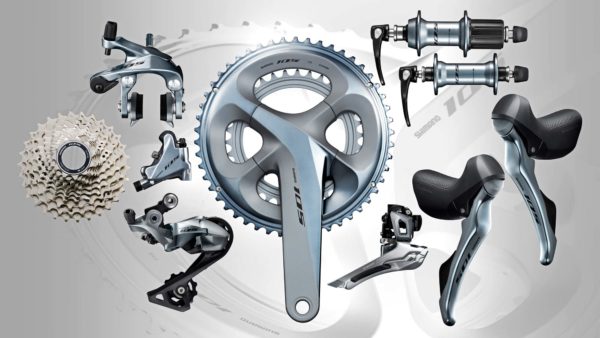 In a move as reliable as clockwork, Shimano trickles down the same road racing tech developed first in their latest Dura-Ace, then Ultegra, now to the more affordable 105. Promising much of the performance of those more racing focused groupsets, 105 continues to be the value leader of Shimano’s road groups. You still won’t find Di2 at this level, but you get much of the same shifting and braking at a much more attainable pricepoint. The new 105 now gets its own disc brake components with an updated look, that once again comes in both stealthy black or more classic silver finishes. 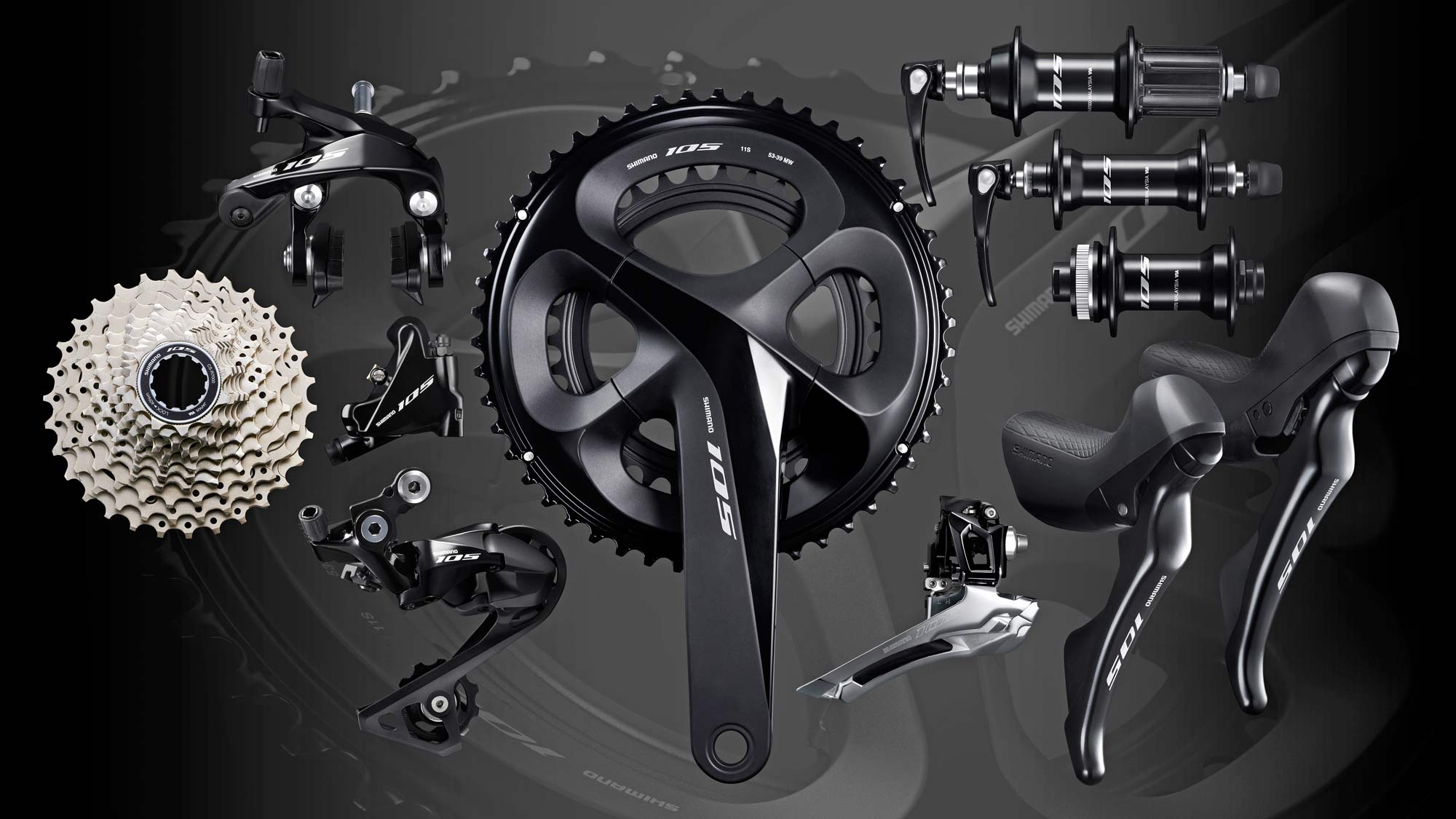 While many of us may pine for a bike spec’ed with a Dura-Ace drivetrain, most bike build budgets stop quick with R9100’s cheapest group selling for over $2000. But at less than half of that you can get 105, and if you are willing to wait a couple of seasons, Shimano regularly trickles down much of their race-ready tech to what amounts to the entry-level of their top road components.

The new R7000 generation of 105 gets updates across the board, and a new look that is meant to follow in the footsteps of Dura-Ace and Ultegra. Shimano says that most 105 buyers aren’t necessarily looking to race, but want performance & reliability for all around road riding.

The biggest two changes to the new group are a more ergonomic set of hydraulic disc brake dual control levers, and the move to a Shadow rear derailleur with slightly wider gear ratios. 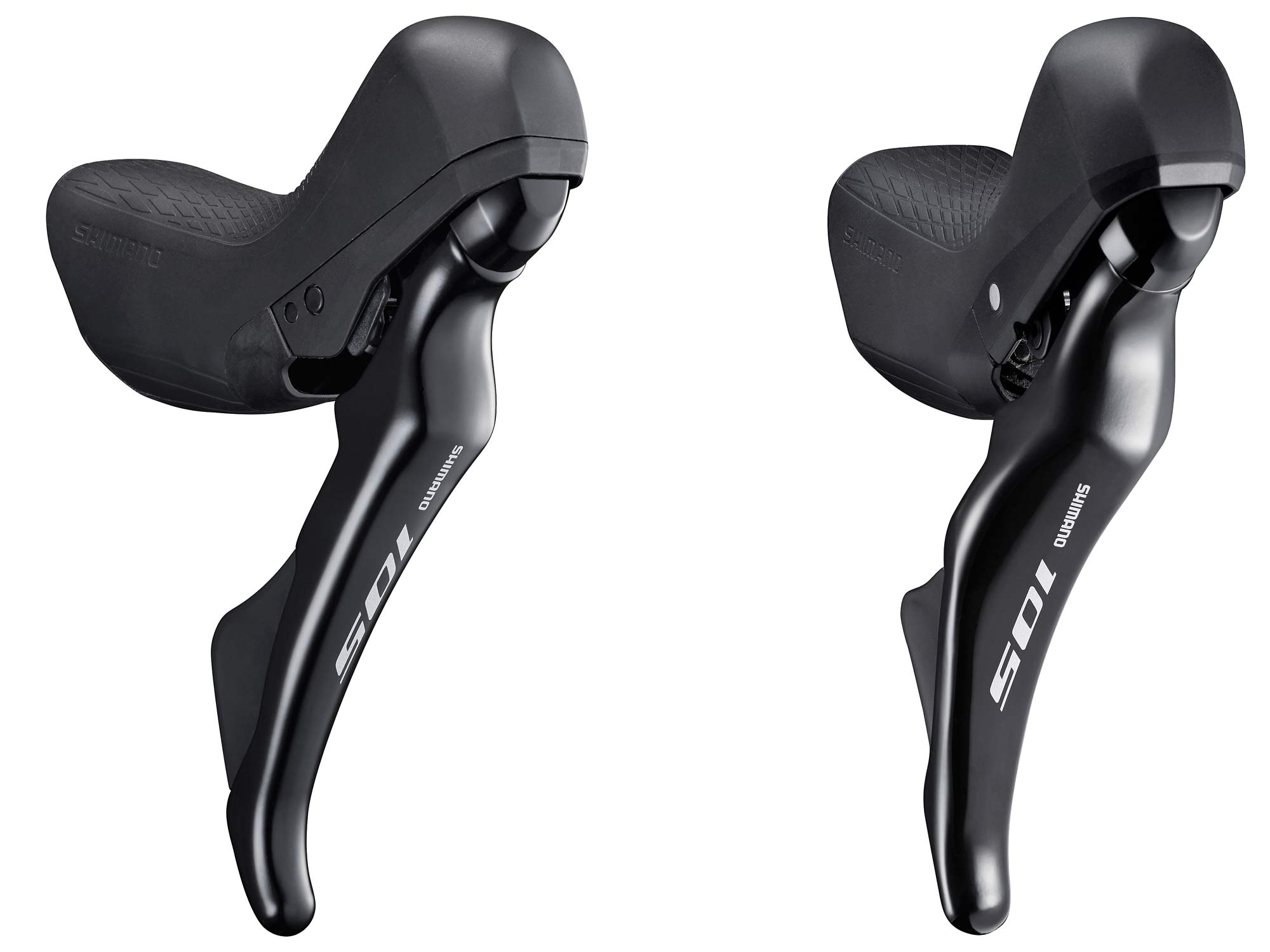 The new 105 hydraulic levers will be a welcome departure for many from the previous RS-505 generation that 105 was assigned. While those older bulbous levers didn’t feel bad in the hand for most cyclists, the large lever bodies’ aesthetics were quite divisive. The ST-R7020 hydraulic dual control levers are said to take their more ergonomic shape directly from Ultegra’;s levers. They also offer the same updated reach adjustment as those levers  to better fir a wide range of rider hand sizes.

Since the hydro levers are a bit bulkier than a rim brake version, Shimano also even offers a second, completely separate ST-R7025 version optimized for cyclists with even smaller hands than the standard reach adjust range. These smaller dual control levers angle their uniquely shaped lever blades closer to the bar, and out at a slightly wider angle to still allow space around the smaller levers for a rider’s fingers without interference in the drops. 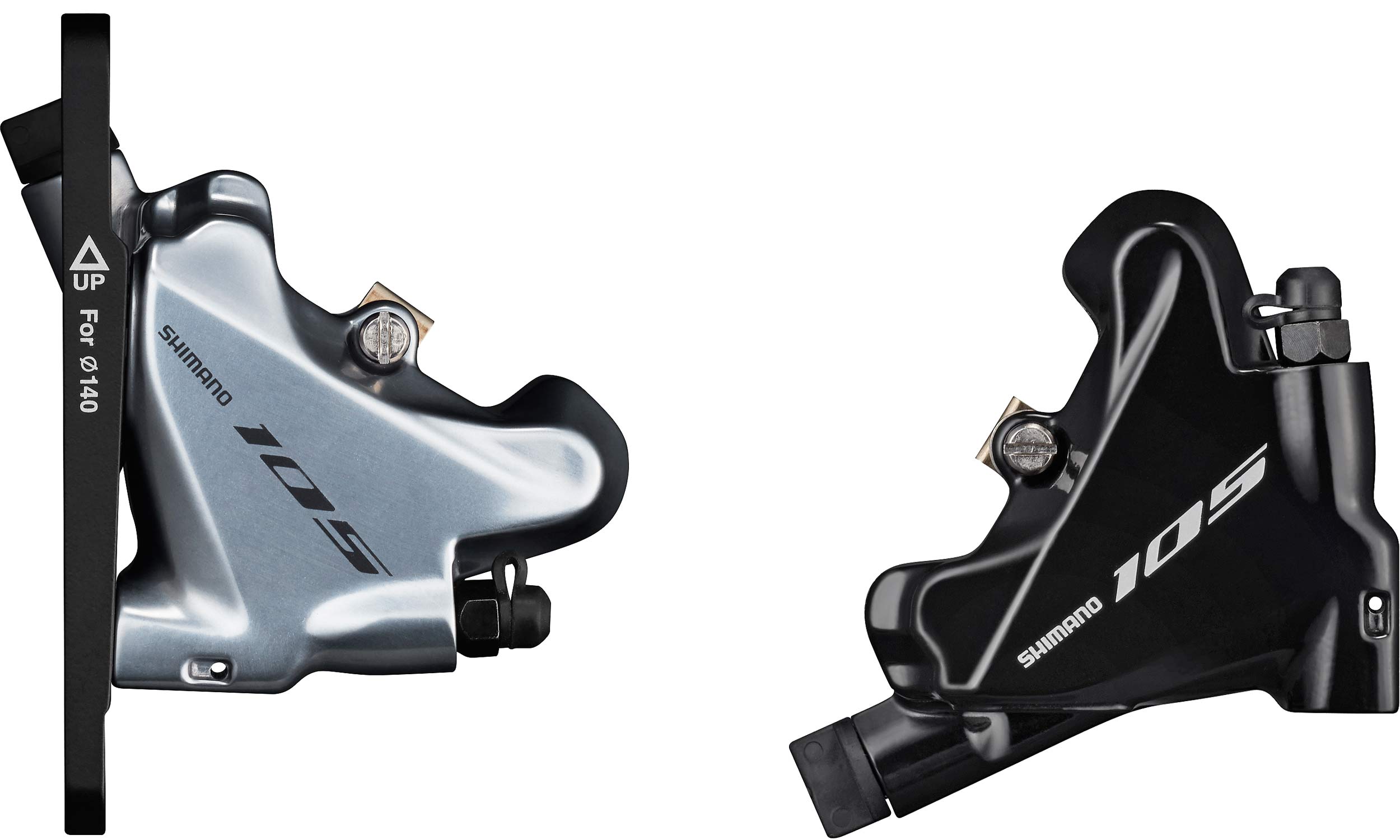 The new flat mount calipers are not a huge departure from the previous non-series RS-505 calipers that had previously been grouped with 105. They do get a slightly slimmer profile that is said to drop a couple grams while retaining the same braking, but also opt for more simple brake pads without cooling fins. And of course now they get silver or black options and 105 branding to match the rest of the group.

The rotors themselves aren’t especially new – using the existing RT70 rotors from mountain SLX, that pair an alloy Centerlock carrier to a stainless steel/aluminum/stainless IceTech sandwiched braking surface. With R7000 though, a new 140mm version of the rotor has been added. Shimano also says the new rotors are “UCI-compliant” for not having 90° sharp edges on the outside of the rotor, although they don’t adopt the more closed cooing fins of the Dura-Ace and Ultegra variants. 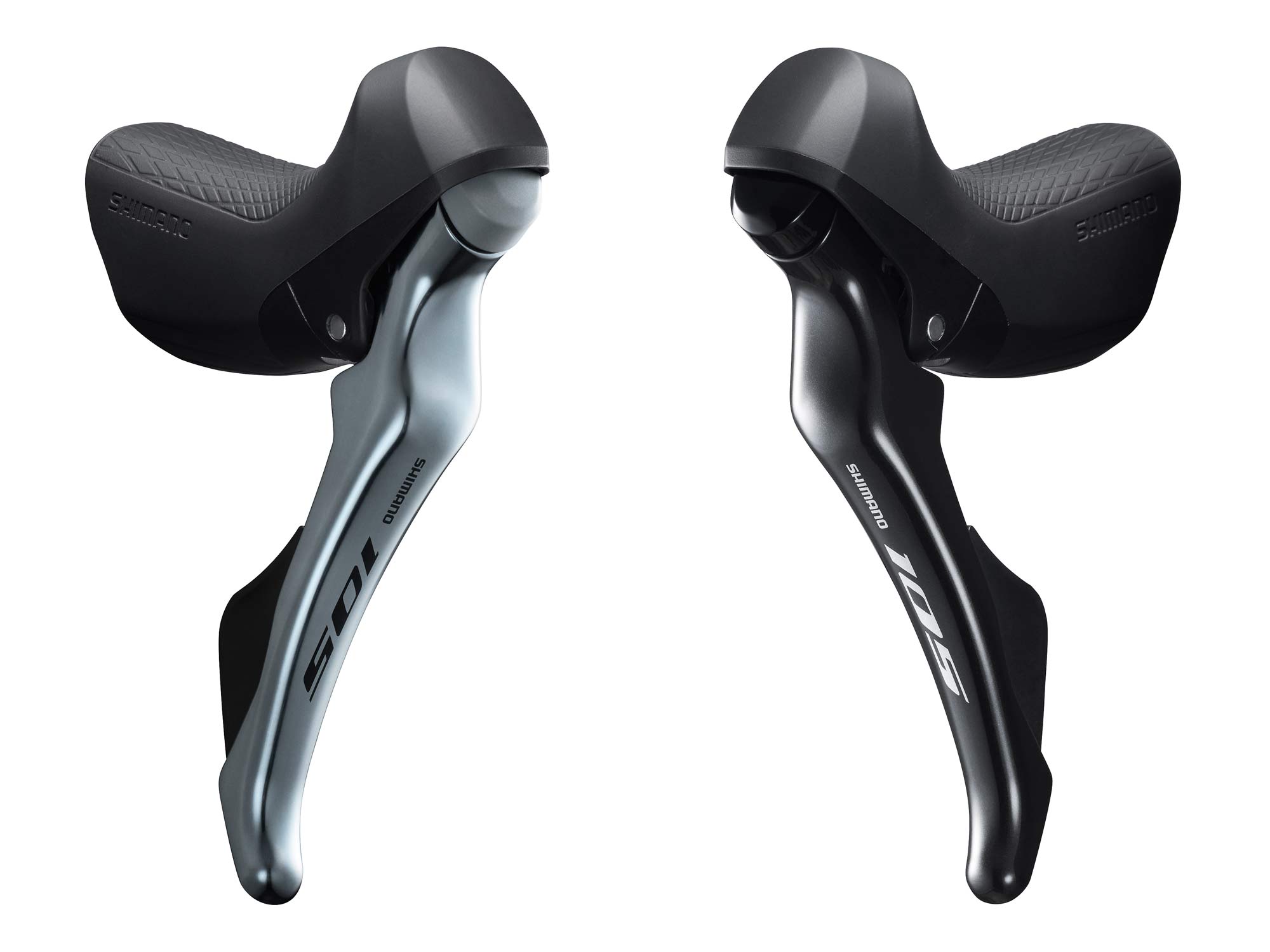 Inside both the new rim brake (ST-R7000) and disc brake (ST-R7020/25) dual control levers, the shifting internals were updated for faster, lighter shifts and a shortened lever stroke. 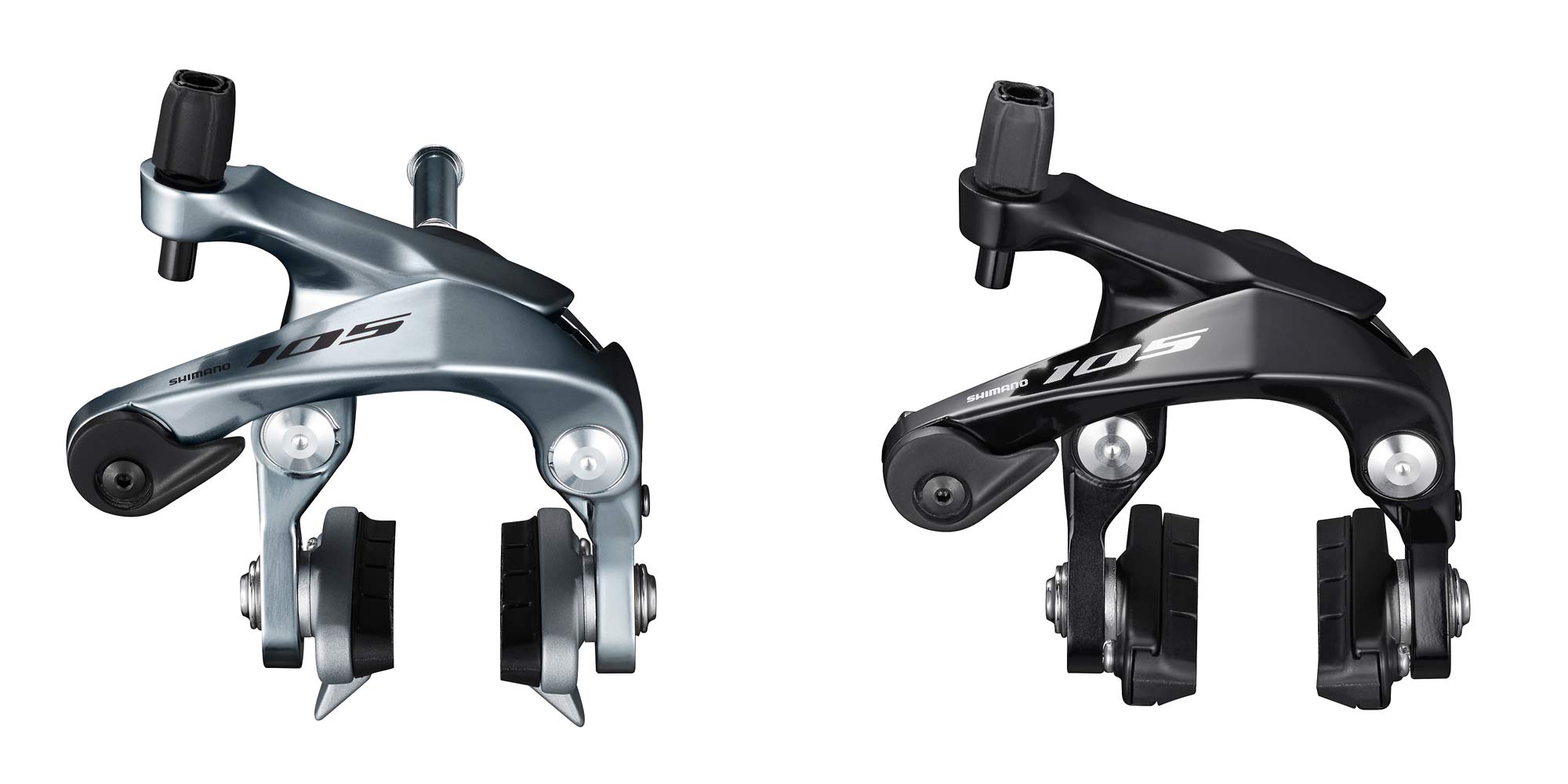 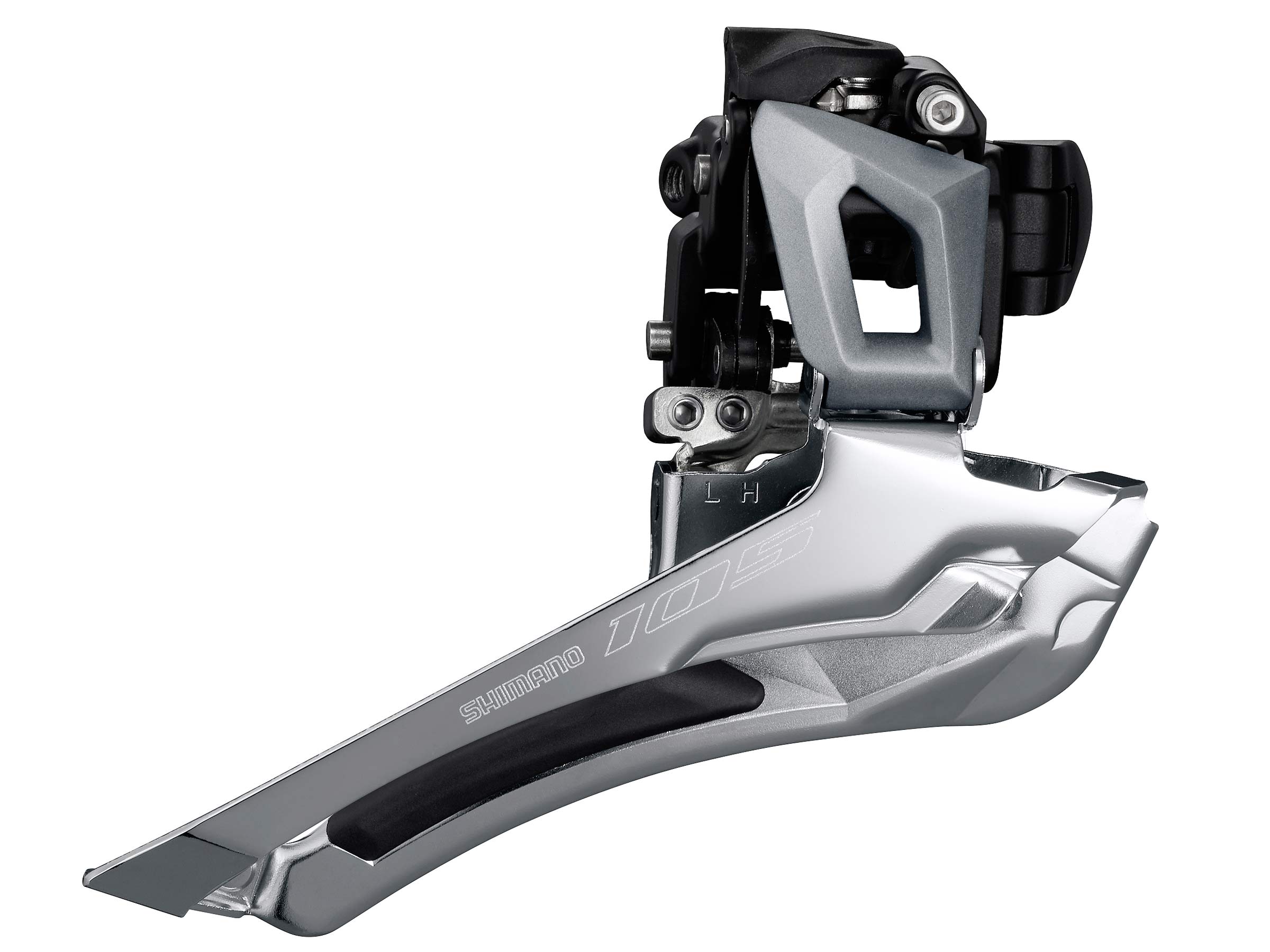 The 105 front derailleur was already quietly updated last summer with a new pivoting design that copied Dura-Ace R9100 in order to get rid of the long lever arm to improve tire clearance, especially on bikes with short chainstays & wider, gravel-friendly tires. That new compact design (which skipped over last summer’s Ultegra update) carries over to R7000, with its easy to use cable tension adjustment replacing a barrel adjuster. 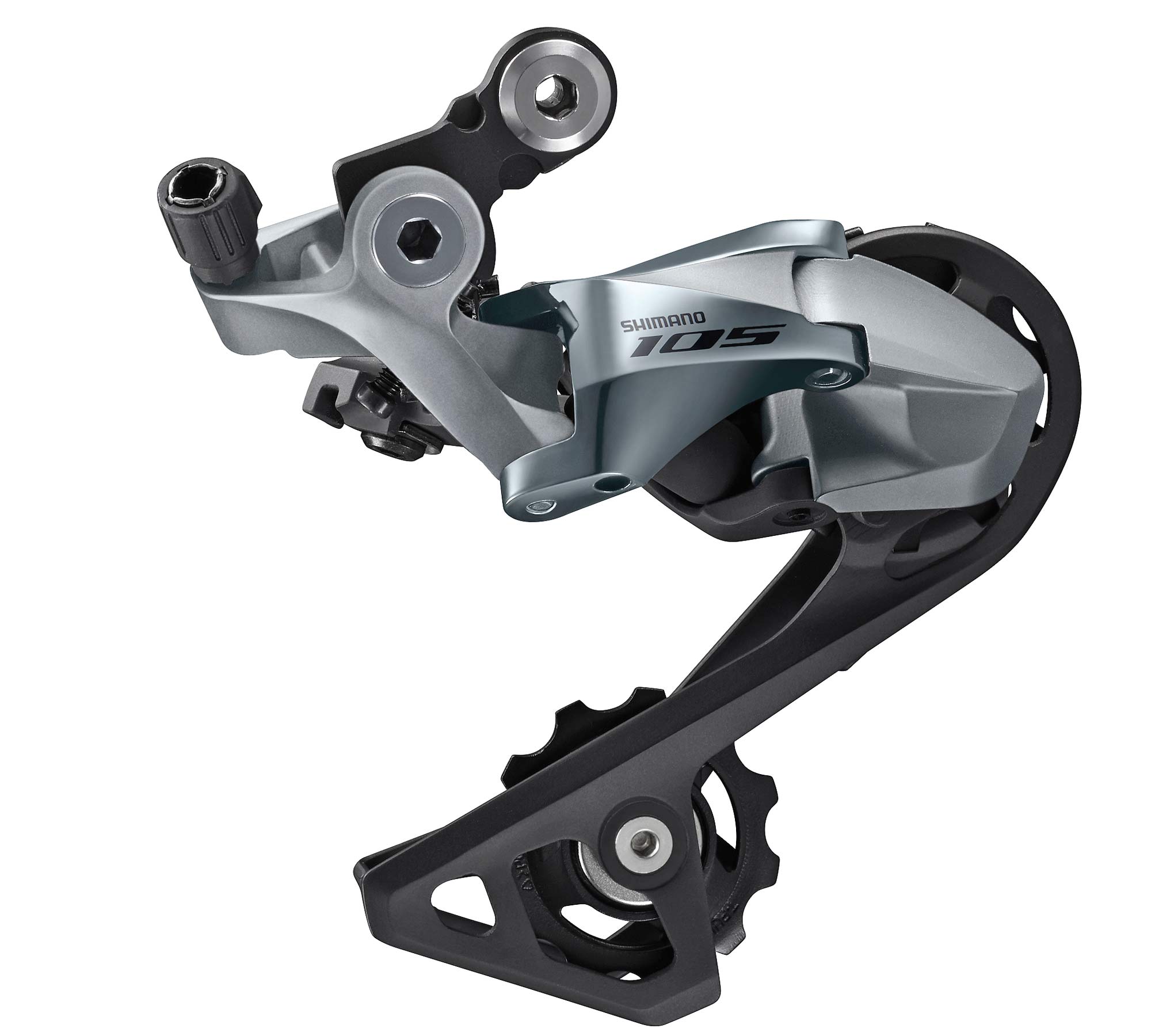 The 105 rear derailleur moves to the low-profile Shadow design adapted from mountain bikes, already found on Dura-Ace & Ultegra. This design tucks the rear derailleur more out of harm’s way (~12mm more inside) in the event of a crash, and adds Direct Mount hanger compatability. The new derailleur comes in two different cage lengths to work with either 11-25 to 11-30 cassettes (short cage – SS) or 11-28 to 11-34 cassettes (long cage – GS) much like Ultegra R8000. 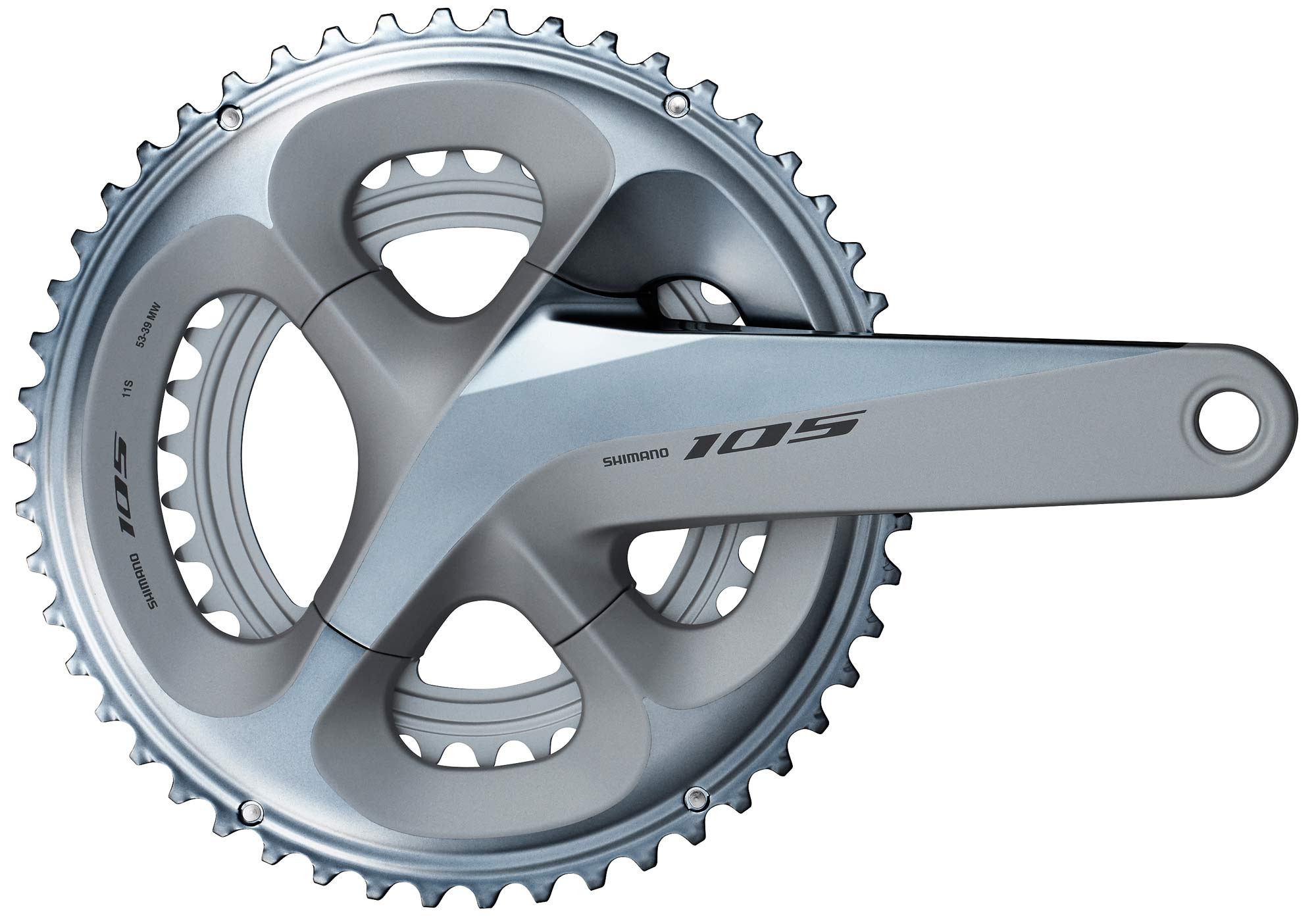 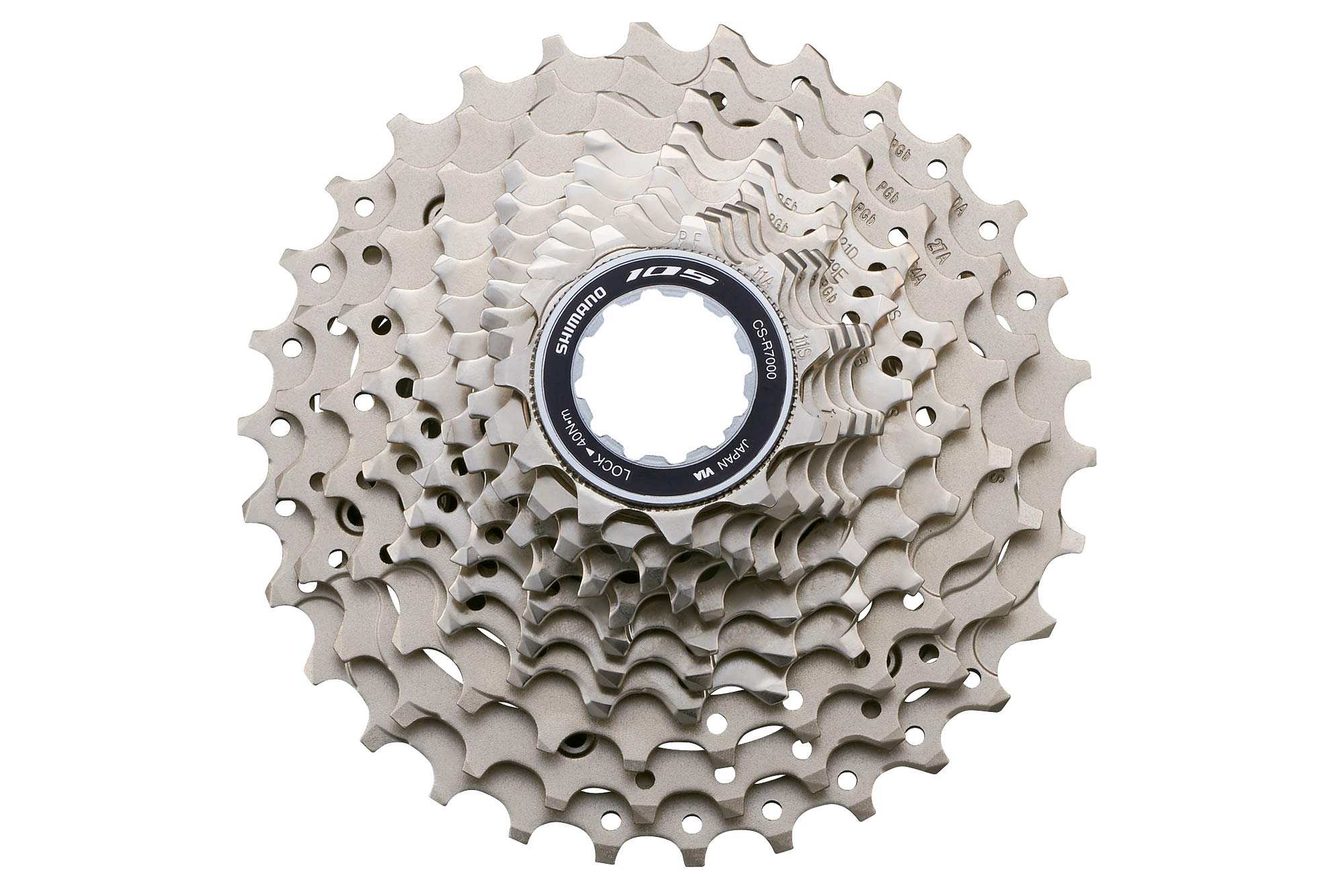 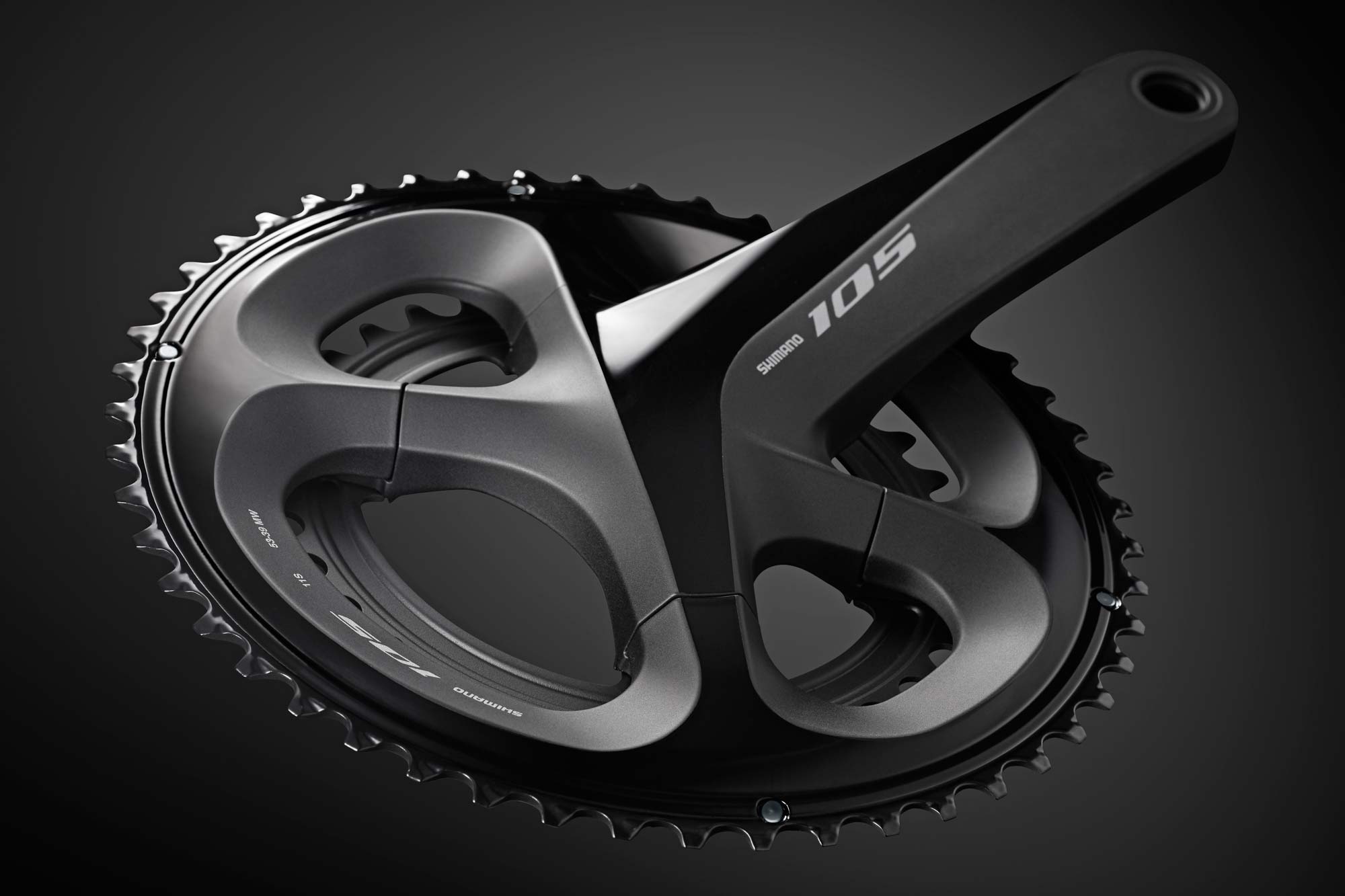 At the same time as the new budget road group, Shimano also has slipped out a new wider rim 700c, E-Thru axle, tubeless-ready, disc-specific WH-RS370-TL aluminum wheelset designed for 28-38mm tires. It has a claimed weight of 1900g for the pair and aretail price of 290€.

Does Chain Reaction have it at 40% Off yet?

Too true. Sucks for US Shimano dealers for sure. Even my STEC discount is barely better than the Euro sales.

I hope so. i was just looking at the ultegra set and it is just outside my budget. it is not like US retailers have this stuff in stock anyways. and i have found that Chain can ship it to my door from Ireland faster then the LBS can get it in. I would be puting it on my bike anyways so why pay all that extra money.

Very exciting, if the discounting is what it is normally from the online retailers than it would be hard for me to justify dropping the extra $$ for Ultegra R8000 outside of the shifters (the graphics on the shifters look like an afterthought). Any chance at all that Shimano comes out with 105Di2? There are a few di2 only frames out there for super cheap that I’d love to pick up and run 105 on.

The close-up pictures are the same (both are the disc version). In the pic of the full black groupset, the lower lever is the rim brake lever and the upper lever is the disc lever.

Yes, the images did not get linked properly, but have now been updated.
The image with two lever colors shows the rim brake version. The two black levers are the hydro ones, in regular & small hand versions.

I suppose that depends if you’re a shop owner with a bunch of fresh, new 105 bikes on your shelves that you hoped to sell for profit this spring…

I can’t think of any shops that go big on Shimano, let alone groups at the end of their very predictable product cycles.

If there are,I honestly don’t know what to say to make them feel better.

He’s talking about bikes specced with 105 from the manufacturer, not aftermarket components. Lots of bikes come stock with the RS-505 levers for the current 2018 models.

Shops don’t get to choose the spec on their stock bikes and that was a popular OE kit. The odds of this being available in June are realistically pretty low though and the odds of them hitting OE this season or pretty much nil so you’ve still got a good shot with the current crop of bikes. Chin up!

I don’t think it will matter THAT much, but even if Shimano delivers late, now that people there’s a new group coming, I can’t see them buying the “old” stuff at full retail $, unless they simply don’t know..

You seriously don’t know a shop with a bunch of 105 bikes on the floor? Have you been to a bike shop in the past decade?

Do shops still stock drop bar bikes? I can count on my left hand the two road bikes and three ‘cross bikes we’ve sold in the last year. Contrast that with losing count of the many $5000 full-suspension sleds that have rolled out just this winter and early spring.

Shops have to know how hideous the RS-505 brifters are, not to mention that weird unergonomic bump near the bar where they moved the brake bleed ports.

Why does Shimano assume that only rich people (i.e. those with Dura Ace money) would be interested in a 12-28T cassette?

There are significant limitations with 5800 12-25? I’ve been using this with a 53/39 for a few years and found it to be great for flat areas I figure if you need a 28t going up you’ll probably want the 11t going down.

I have the SRAM. Its better than the Shimano 11-28, but a little gappy in the bottom half. You go from 1 tooth to 3 tooth gaps in 3 shifts.

SRAM’s gaps are more sensible in my opinion. Worth remembering – “1 tooth” is not a fixed value, it’s a percentage of a circle. It’s a much bigger gap on smaller cogs than bigger ones.

What’s the over/under on them actually hitting the June delivery date?

0%. I bet we don’t see if on the sales floor until mid/late fall. There was a big gap between the debut of 8020 and 9120 (aka mechanical/hydraulic Ultegra and Dura Ace) and when it started showing up on bikes.

Unthinkable to not offer 46/30T or 48/32T chainrings for this chainset.

I second this. If I were to buy a 2x gravel rig, it would have to be 46/30T. The difference between 50/34 48/32 is almost completely offset by large tires. The 30-34 gets very useful climbing up single-track or switchbacks. Of course, I went with Sram 1x because, well Shimano didn’t even have a RD that I’d consider three months ago.

Glad to see the 11-34 cassette designed for gravel, but when will Shimano get with the program and offer a super compact double chainring option? Really need that 48/32 or 46/30 please!

Yeah, so bored of waiting for this. 44-28 wouldn’t be too small either. Road kit at this level needs to be more than lower cost race specs.
That new ultegra RD is good to see but max cassette size to go with it daft small.

This is literally the only thing that I wanted from an updated 105 group, or Shimano generally.

Too bad no Di2. Thats the announcement I was hoping for.

I’d like to see Di2 available on all Shimano grouppos. Tiagra, Alivio, Acera, Tourney, all the way down to the Shimano grouppos they put on Walmart bikes. But at this rate of trickledown we’ll never see it.

I’d like to see myself as a wealthy professional GC, but at this rate we’ll never see that either

Will the cable pull be the same as 5800? Be nice to be able to swap in the new mechs to my old groupset

I dislike buying the finned pads, seems like such a waste not to re-use the fin bit with a new pad. Can of course be dropped off for metal recycling, but still just seems too Tassimo/Keurig/Nespresso-y.

They seem ever so slightly different.