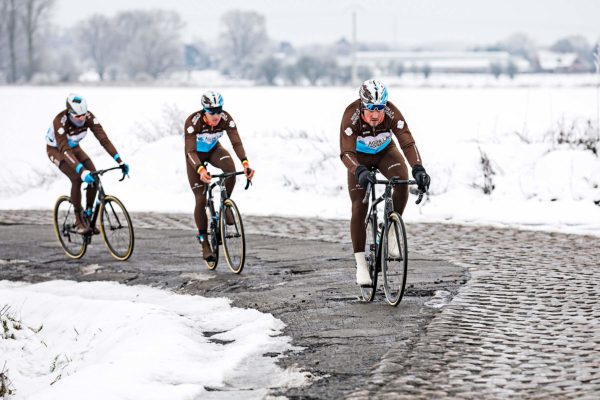 Last autumn Eddy Merckx gave us a detailed first look at the complete overhaul of their all-around stage race bike, the new 525. Now together with AG2R La Mondiale the 525 gets a concrete date for its racing debut. Plus, we have a glimpse at another all-new bike, a light & stiff versatile climbing bike called the Stockeu69… 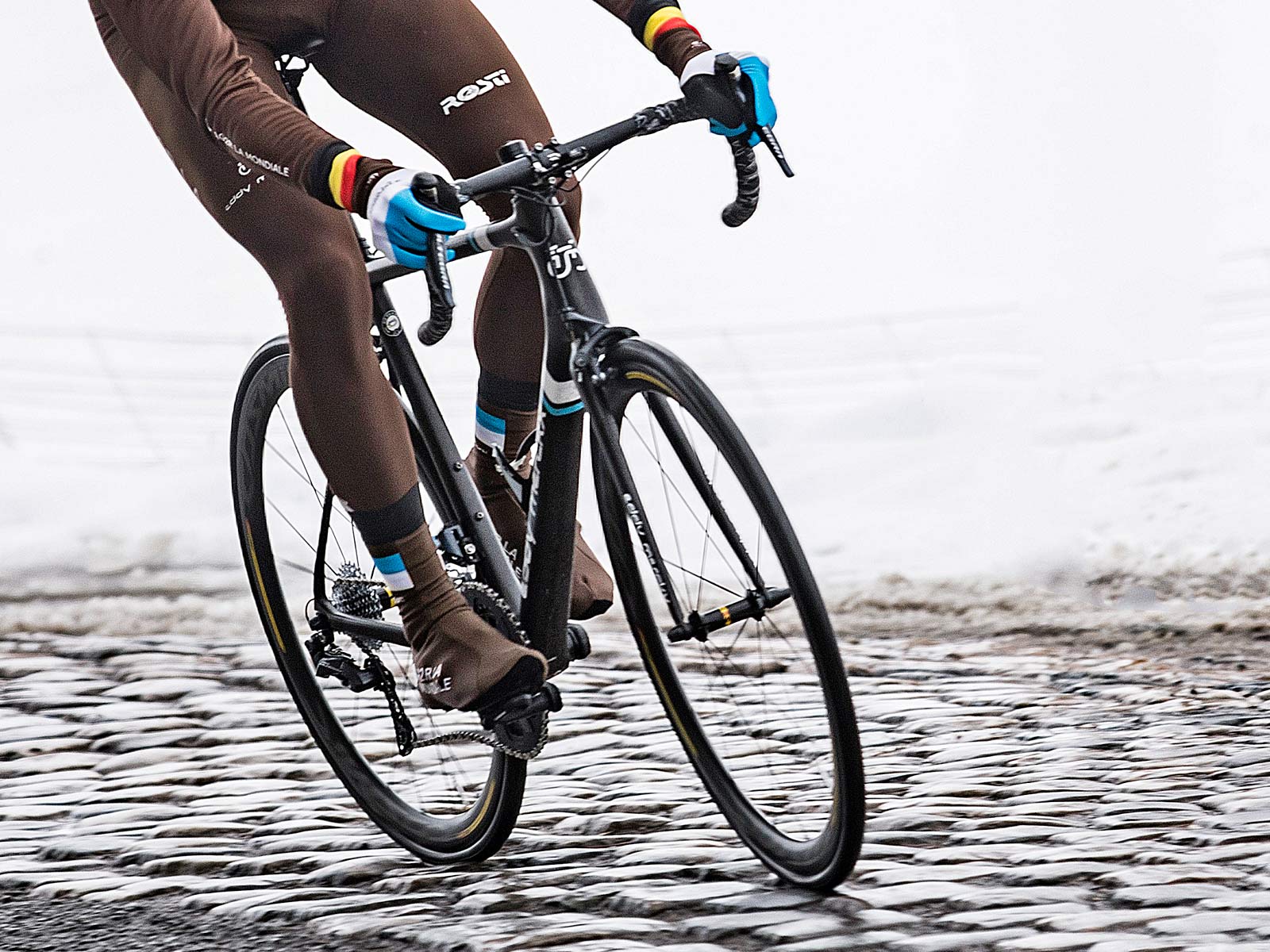 Named for the punchy Ardennes climb, almost half of which is over 10%, where Eddy Merckx made his race winning attack in the 1969 Liège-Bastogne-Liège, the new Stockeu69 is being called “the ultimate Belgian Cycling Factory stiffness-to-weight race bike”. That’s a key claim, as it puts the bike up directly against the Ridley Helium SLX also under the BCF group, an already stiff hi-mod carbon race bike with a frame weight of just 750g. 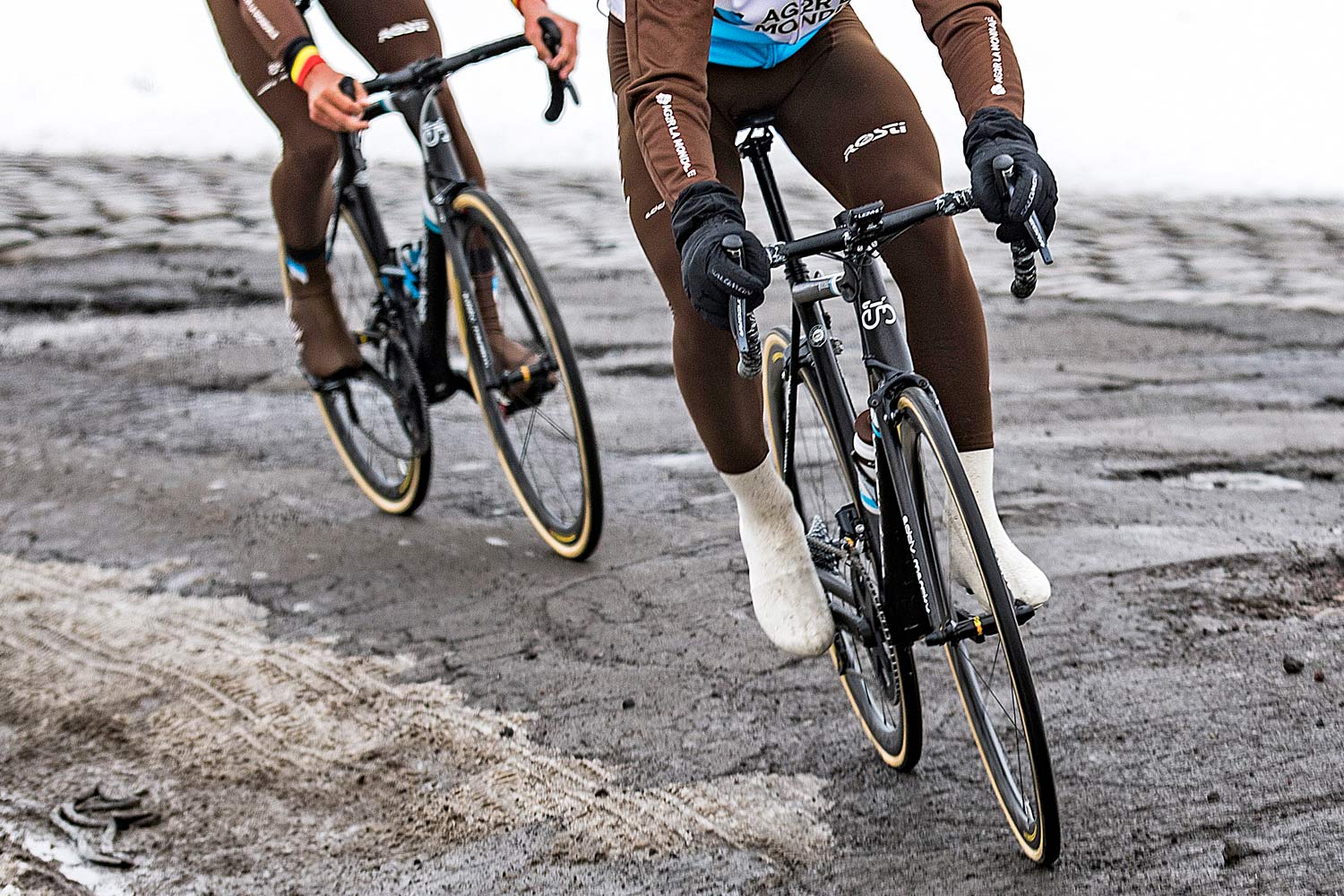 And the bike doesn’t look to be only a dedicated mountain climber. The Merckx naming convention of course suggests its suitability for the hilly Ardennes Classics, with their relatively short, but steep climbs. And AG2R has riders Oliver Naesen & Silvan Dillier here have been testing the upcoming bike on the frozen cobblestone sectors like Hem, which make up the last legs of Paris-Roubaix. 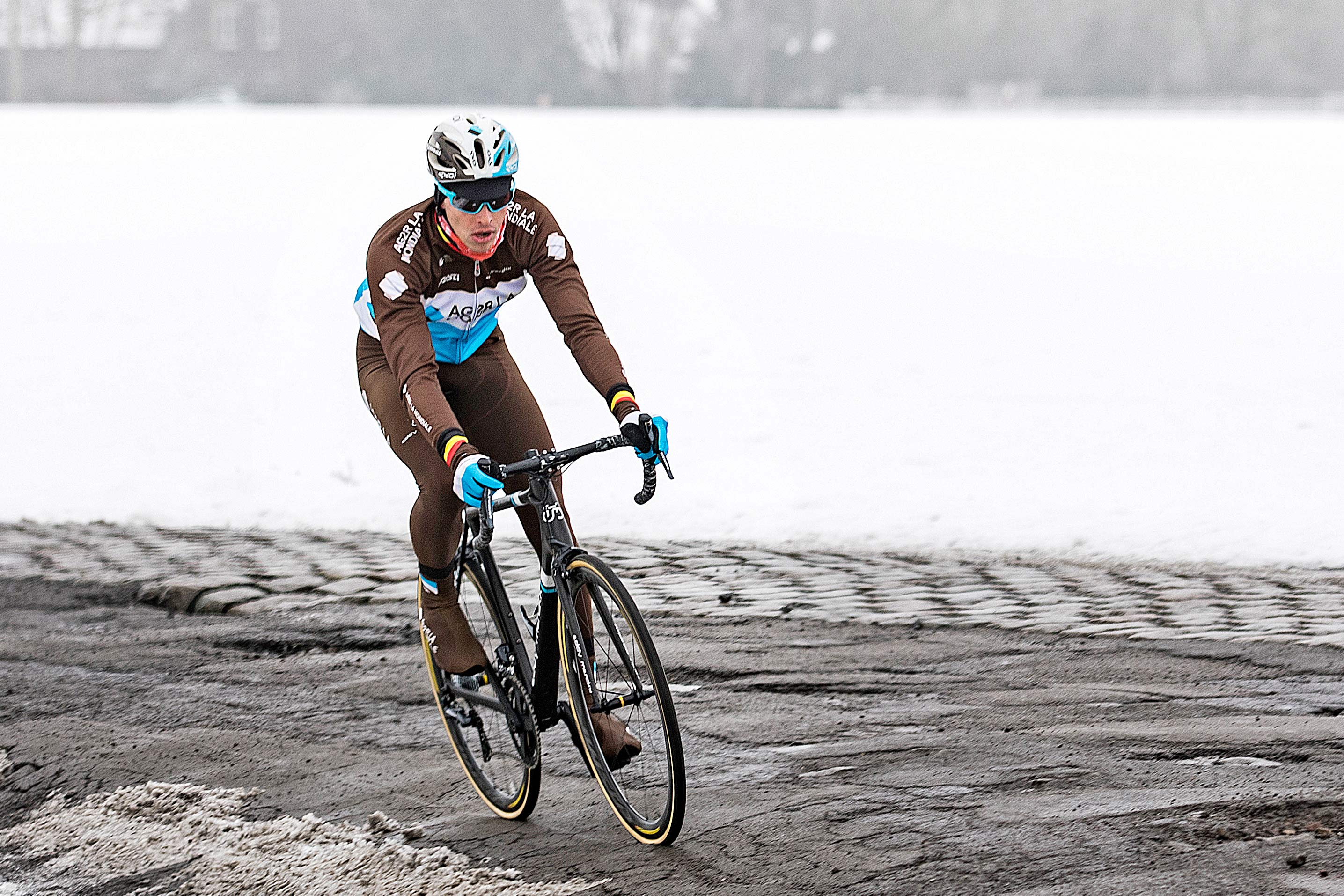 No official detail on the bike or its debut. The Stockeu69 does deviate from the 525 with a conventional non-integrated headset & stem, tube shaping that all appears straight with round to boxy profiles, thin but straight seatstays that hit the seat cluster where there is a conventional external seatpost clamp as well. The Stockeu69 will certainly have this single bolt rim brake version, with no mention yet of a disc option. The new bike is shown with a UCI approved stick (no surprise) but the latest approved list from December 2018 makes no mention of the Stockeu69 yet. 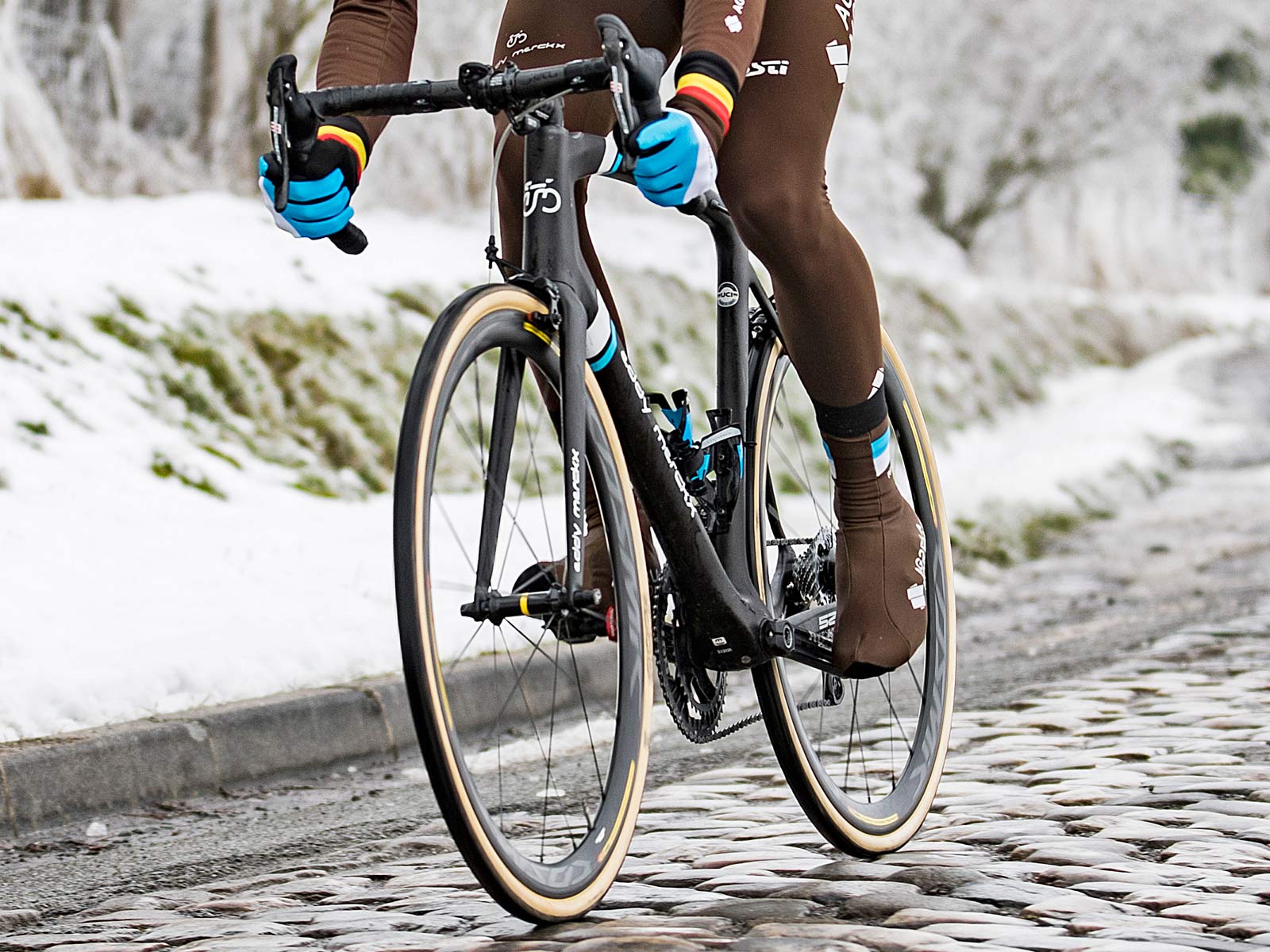 The 525 does get a bit more definitive timeline. Eddy Merckx is set to officially launch their new flagship 525 in Brussels on July 3 with their AG2R La Mondiale team, ahead of the start of the 2019 Tour de France in the Belgian city. And ahead of the 50th anniversary of Eddy Merckx’s first Tour victory. 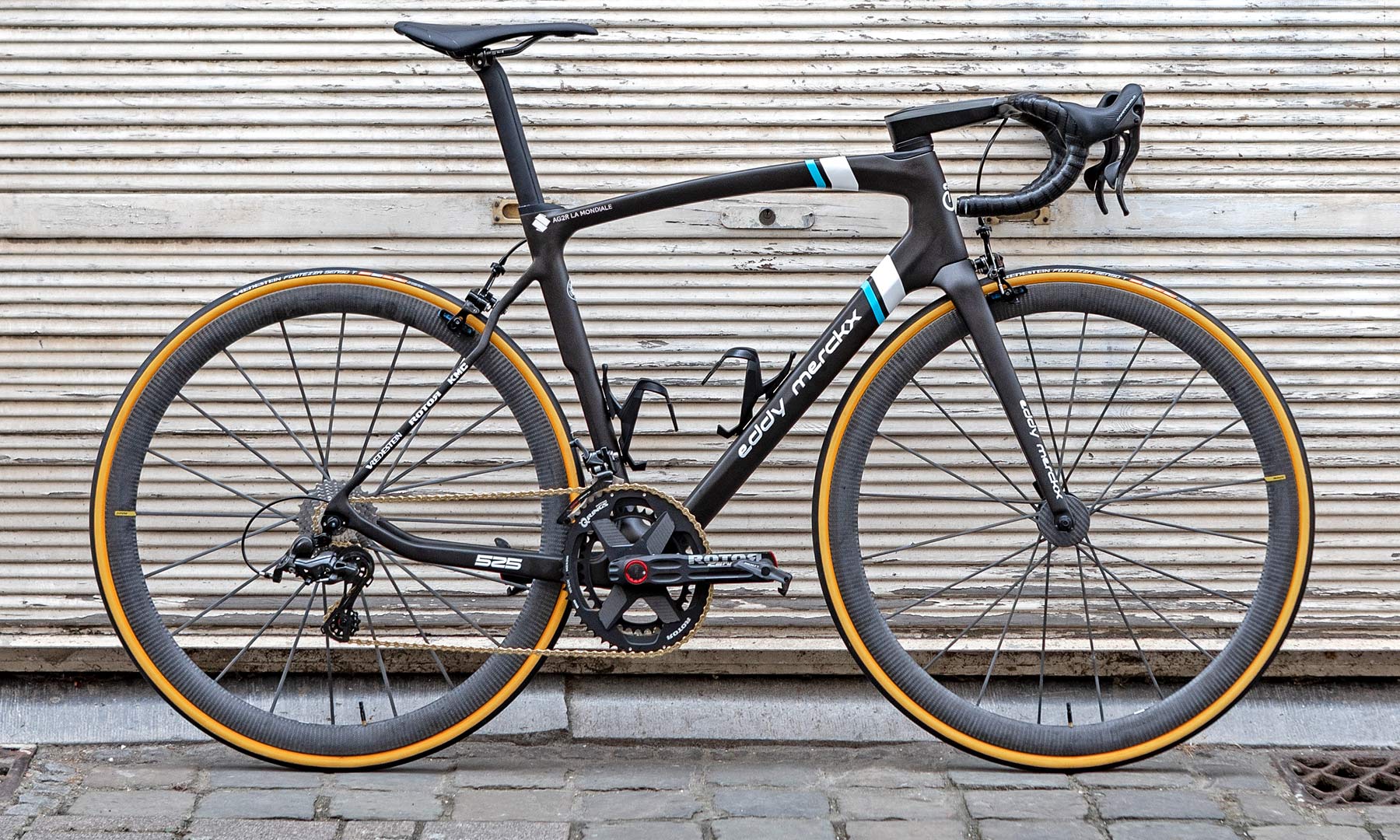 The team has been riding the bikes since early winter, and we got a good look at Oliver Naesen’s bike then. In the time since, the 525 has made it onto the UCI approved list with both this rim brake version and a 525 Disc being approved in a five size range (XS-XL.)

Nice but will new bikes ever add form and color as well as function. Miss that.

That guy riding in the snow with no gloves!

That guy is Oiver Naessen, former Belgian National Champ, so no gloves required…but this is just a photo shoot as you can see him in full finger gloves on a close up shot.

I like the shapes of the 525. I wonder if Specialized will sue them for the kinked seatstays since a Roubaix once had them.