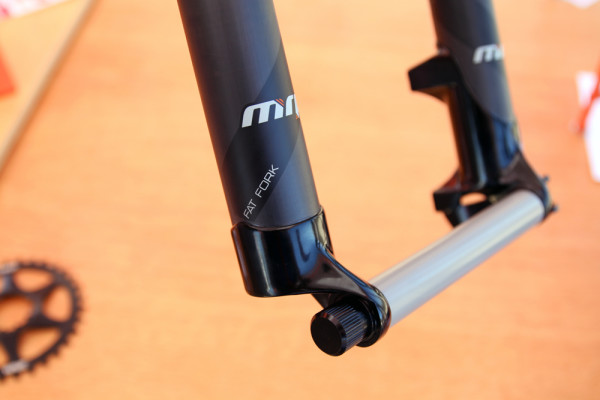 MRP is still probably best known for their chain guides, but they have been in the fork market for a long time. Previously known as White Brothers for their forks, the brand produced both suspension and rigid models like the Snowpack fat bike fork. A lot has changed in the fat bike world since then so naturally, MRP is introducing a new fork that will be compatible with all of the current fitments. Still without a name, the Fat Fork was shown along with some improvements to their guides plus a few other updates… 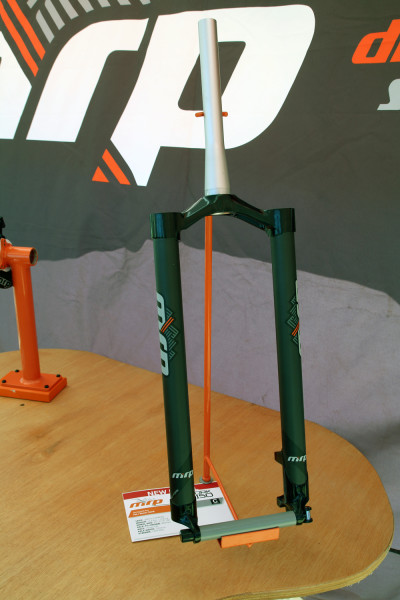 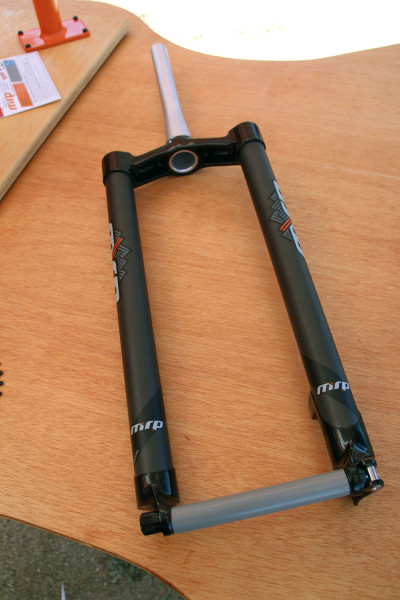 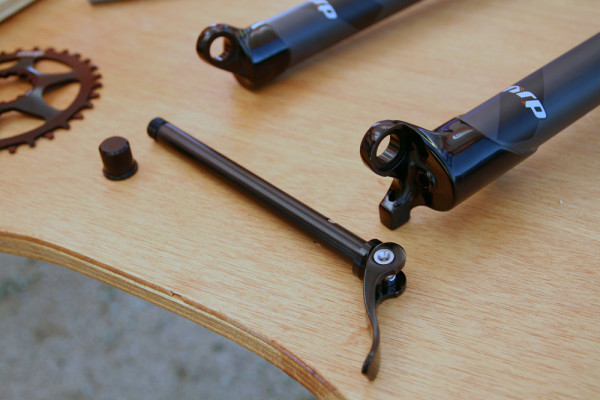 These days, if we’re talking rigid fat bike forks, most riders are looking for something that is swappable with a bike running a Bluto. That is, a 150x15mm thru axle and a suspension corrected 490mm axle to crown. MRP is just finishing testing on the 5″ tire compatible fork which currently weighs in around 2.2 lbs. Expect to see these in production later this summer. 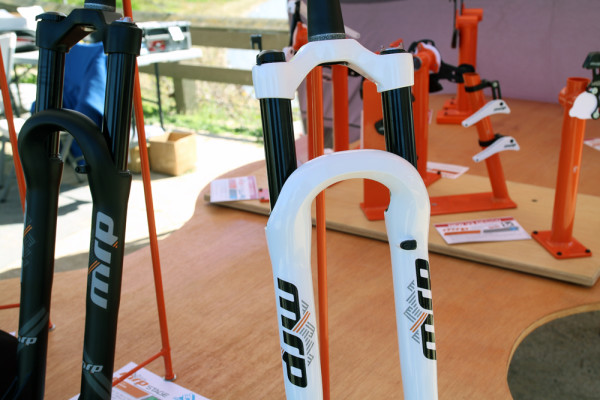 On the suspension side, MRP’s forks get a cosmetic change with new black stanchions. 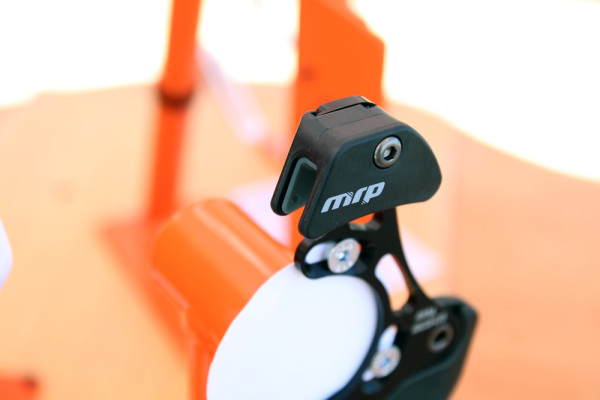 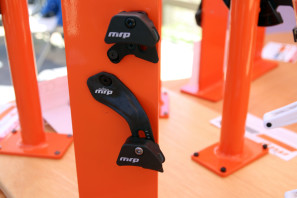 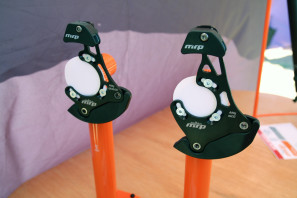 In a move that’s getting to be more commonplace, MRP’s chain guides include a new upper guide that uses comolded rubber for a quieter operation. Found on the new versions of the AMg and 1X guides, the TR upper is retrofittable to previous guides as well. The AMg V2 is meant for 1×10 or 1×11 drivetrains and uses a new backplate and redesigned lower profile skid plate on the bottom of the guide that is meant for 26-32t chainrings. Weighing in at 111g for the ISCG 05 alloy version, AMgs will sell for $119.95 for the alloy, and $169.95 for the carbon. 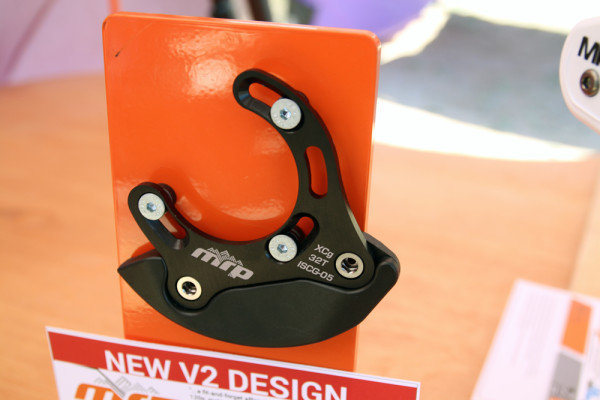 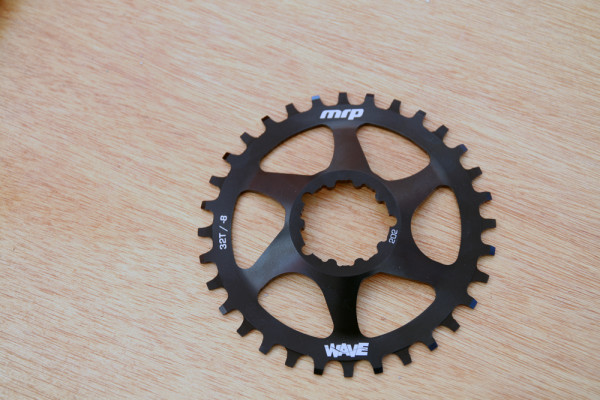 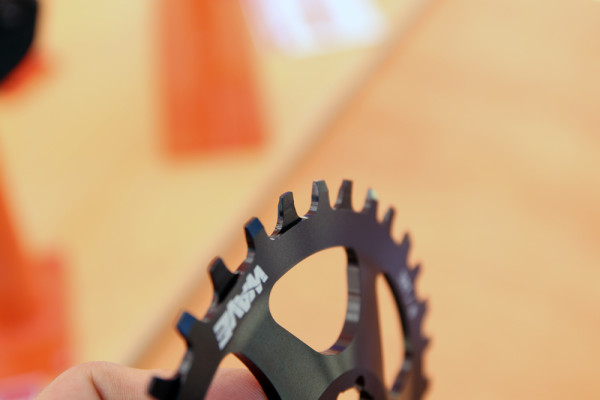 Finally, MRP is now shipping their Wave chainrings in the SRAM Direct mount configuration. Currently available in 30, 32, and 34t, the chainrings are made in Junction, CO and use a novel side to side wave pattern rather than a narrow wide tooth profile to cut down on chainring wear. DM rings sell for $79.95 with a 49mm chainline and 104 BCD rings are on the way.

I aready riding my “Popeye” from Carverbike, looks like the same fork!

For their next trick, MRP needs some better lockout on their forks – even on the firmest setting I almost never bother to stand because that sucker is going to bob up and down like a momentum-eating marshmallow monster.

MRP forks don’t have a lockout.

MRP is like an aggregate website- a lot of stuff your seen before, not terribly interesting just repackaged

MRP…Modestly Rad and Practical. Components for folks that just want their sh1t to perform and do it well.

I hope their new chain ring works well. Every chain ring manufacturer has gone to narrow/wide. I’m sure they work great for some people, but they don’t for me. I’ve tried 5 manufacturers rings. All wear out in 250 miles then produce a terrible grinding noise that vibrates through my feet. It also prematurely wears my chain. I went back to normal chain rings and leave chain management to the dérailleur. Works well for me. I’ve been stocking up on normal direct mount chain rings since everyone has stopped production on them for narrow/wide. MRP is the last one. Just picked up 3 of their bling rings. Once I eventually wear those out, I’ll move onto their wave rings. Hope they work better than narrow/wide.

same here, but wolftooth makes stainless steel chainrings. that is probably the way to go for single ring.