It may have taken a bit to regain their footing, but Magura has been killing it recently with their new brakes. I’ve had a set of their MT Trail brakes on a bike for a full season now, and they have proven to be just as consistent as they are powerful – and they are extremely powerful. Looking to spread the love to a wider audience, Magura has taken the MT Trails (now the MT Trail Carbon), and down speced the lever along with a few other tweaks to create the new, far more affordable MT Trail Sport… 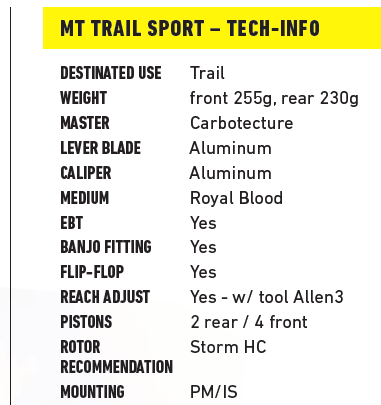 The biggest changes over the MT Trail Carbon would have to be the aluminum 1 finger HC lever, plus the move to a Carbotecture rather than a Carbotecture SL housing. On average, you should be looking at around 55g of weight penalty compared to the MT Trail Carbons for the entire set. Otherwise, the brakes use the same four piston front, two piston rear caliper design with Royal Blood mineral oil, a flip flop lever design with tooled reach adjust, and a black and silver finish (though caliper decal kits are available). Price wise, the Sports come in at less than half the price of the Carbons with Euro pricing set at €219.90 vs €579 for the carbon version. We should get a better idea of U.S. pricing at Magura’s upcoming press camp.

There’s no doubt that Danny MacAskill is one of Magura’s hottest athletes – so much so that he has his own signature brake. One of the biggest improvements to the MacAskill series MT7 brake is the HC3 lever which was developed exclusively with Danny to address his needs out of a brake. The shortened lever includes a ratio adjustment with a T25 to switch between high braking power and extended modulation based on the conditions, plus a reach adjust with a 3mm allen. The design also prevents the lever from pinching your fingers under huge braking force – something we talked to Danny about last Sea Otter. Even though it’s an issue most riders would never experience, it’s cool to see Magura truly take Danny’s input to heart and not just make a small tweak, but make a wholesale change with an entirely new lever.

Now, that same lever is available separately – not just as part of the signature MT7. Available for the MT6, MT7, MT8, and MT Trail Carbon brakes, the new lever can be swapped in to improve your current brakes and give you adjustable, one finger braking.

The other big news for Magura at Sea Otter was the arrival of their Vyron eLECT remote improvement. OK, that might be over selling it especially since it wasn’t really talked about, just on display, but the simple fix should be a big improvement for the remote. A number of riders (including myself) have found the small circular button on the remote a bit difficult to press when bouncing down the trail. Magura used the three button remote design so riders could use the same remote for their eLECT forks and shocks, but if you’re not using either of those, you’re better off with a larger button. And that’s exactly what the plastic sleeve accomplishes. The large paddle presses down on the center button, effectively making it a much larger button that is much easier to find with your thumb. I’m sure we’ll get more detail on this in a few weeks, but if you’re wishing your remote was a little easier to operate, this should be the answer.

Have they addressed the real issue with the Vyron, the delay from button press to activation?

Wasn’t the delay less than 1 second? I couldn’t imagine it being that big of a deal, but I’ve never used one. This remote is definitely a huge improvement. The previous remote was a deal killer for me.

The delay is a HUGE deal.

For people that haven’t ridden one.