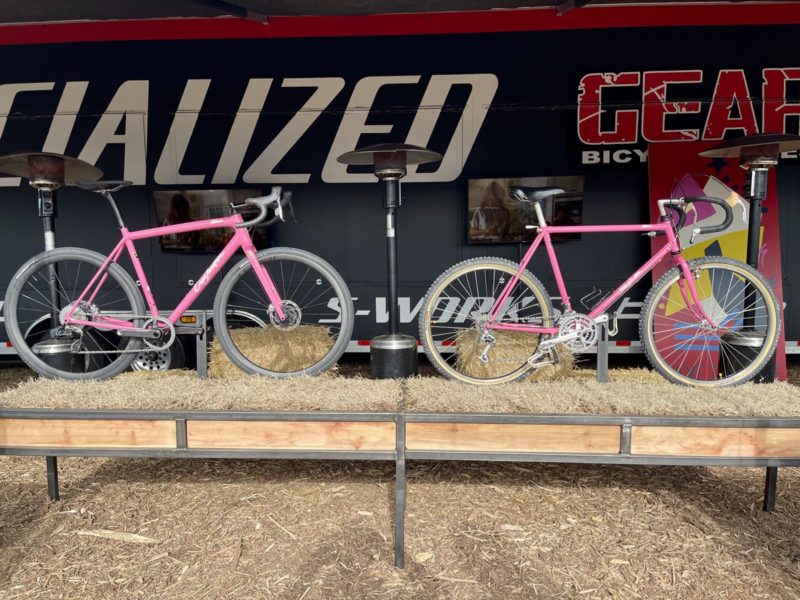 It’s considered a gravel bike, but the new Specialized has something in common with vintage mountain bikes. Obviously, the new bike offers better performance in nearly every regard, but it’s the versatility that links it to the past. In the early days of Specialized’ first professional team, Team Stumpjumper, the team raced on pink StumpJumper mountain bikes outfitted with ATB drop bars and knobby tires. A bike that eventually led to the development of the RockCombo. 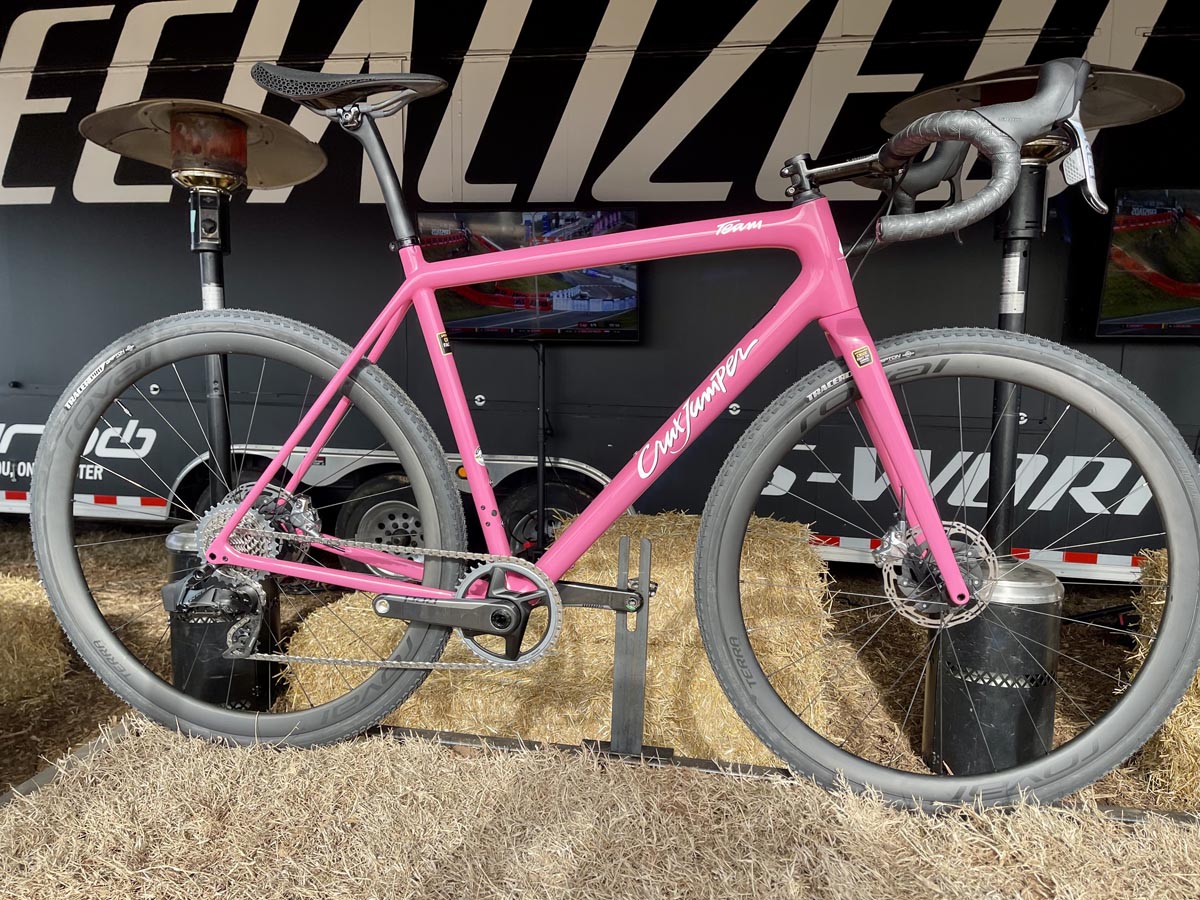 In a way, the new Specialized Crux is similar. Technically a gravel bike, the Crux now pulls double duty as a ‘cross racer thanks to its minimalist, super light design. At the same time, you can load it up with 700c x 47mm or 650b x 2.1″ tires and go tackle true-off-road terrain. Like those early bikes, the new Crux is designed to ride just about anything with style and speed.

Which is exactly why Specialized is honoring those early pink bikes with a modern “CruxJumper”. 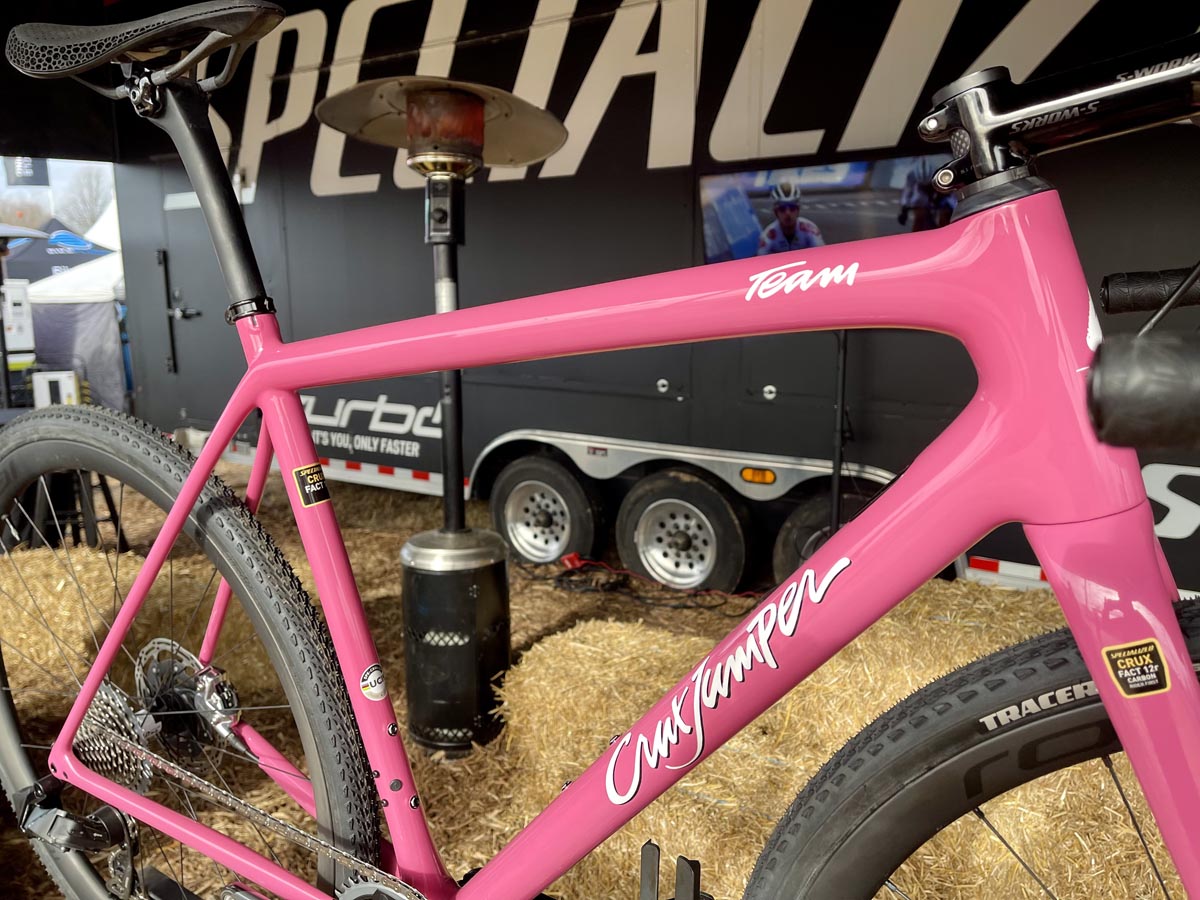 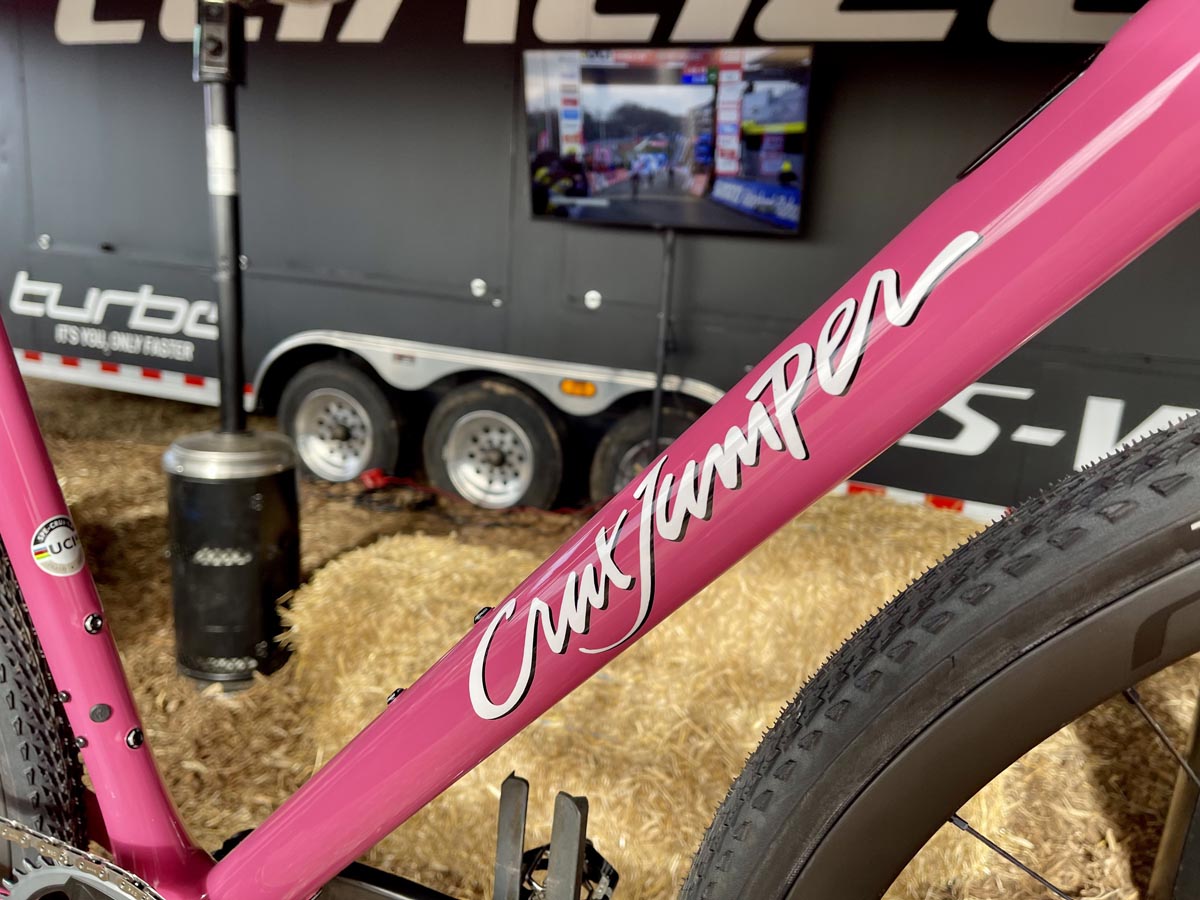 Like the RockCombo tribute Diverge builds from Unbound, the CruxJumper is mostly about the throwback paint job. Recreating the original pink hue of the Stumpjumper Team, the CruxJumper Team is ready for action as-is. 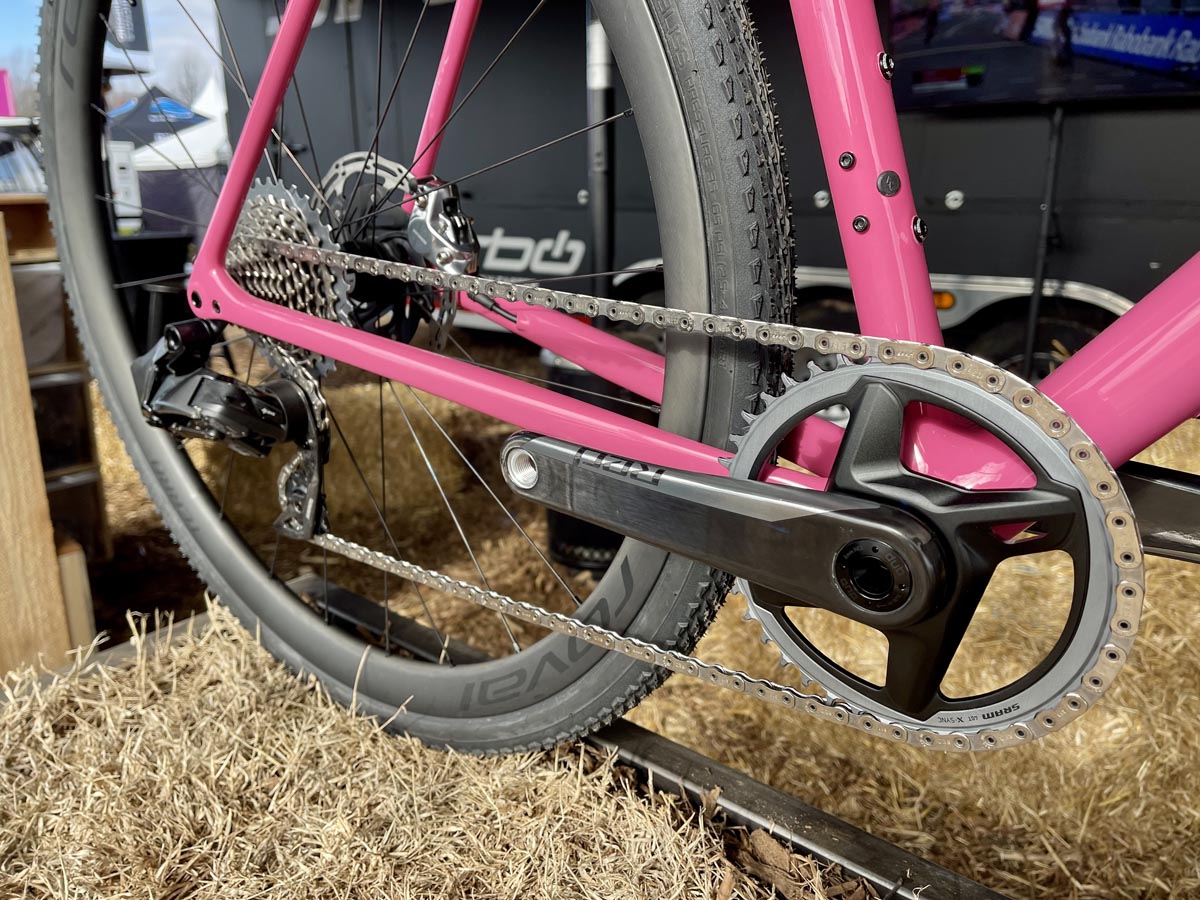 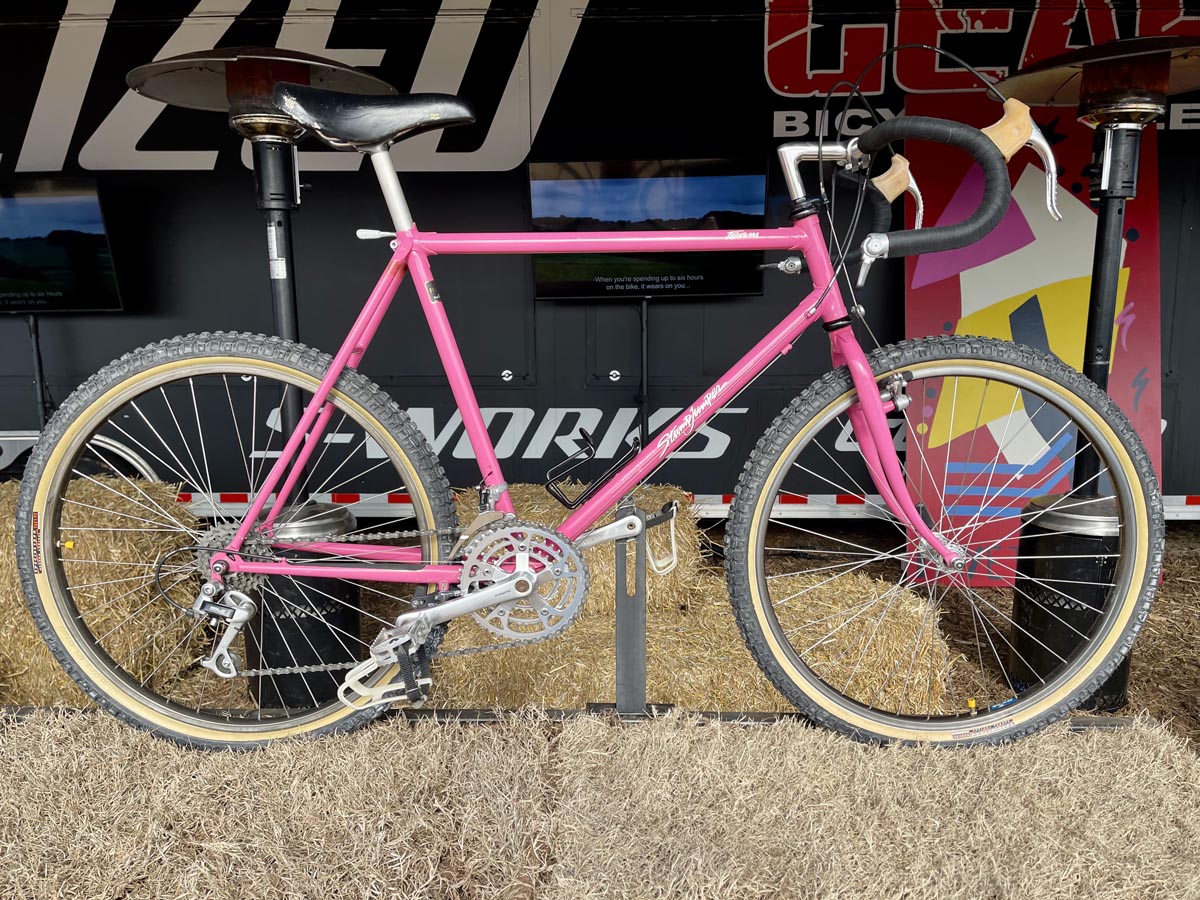 Next to the CruxJumper in the booth, Specialized also had the bike’s inspiration—the original Stumpjumper Team model. We’re not sure if it’s fully original, but we’re hoping to get some more information on it soon. 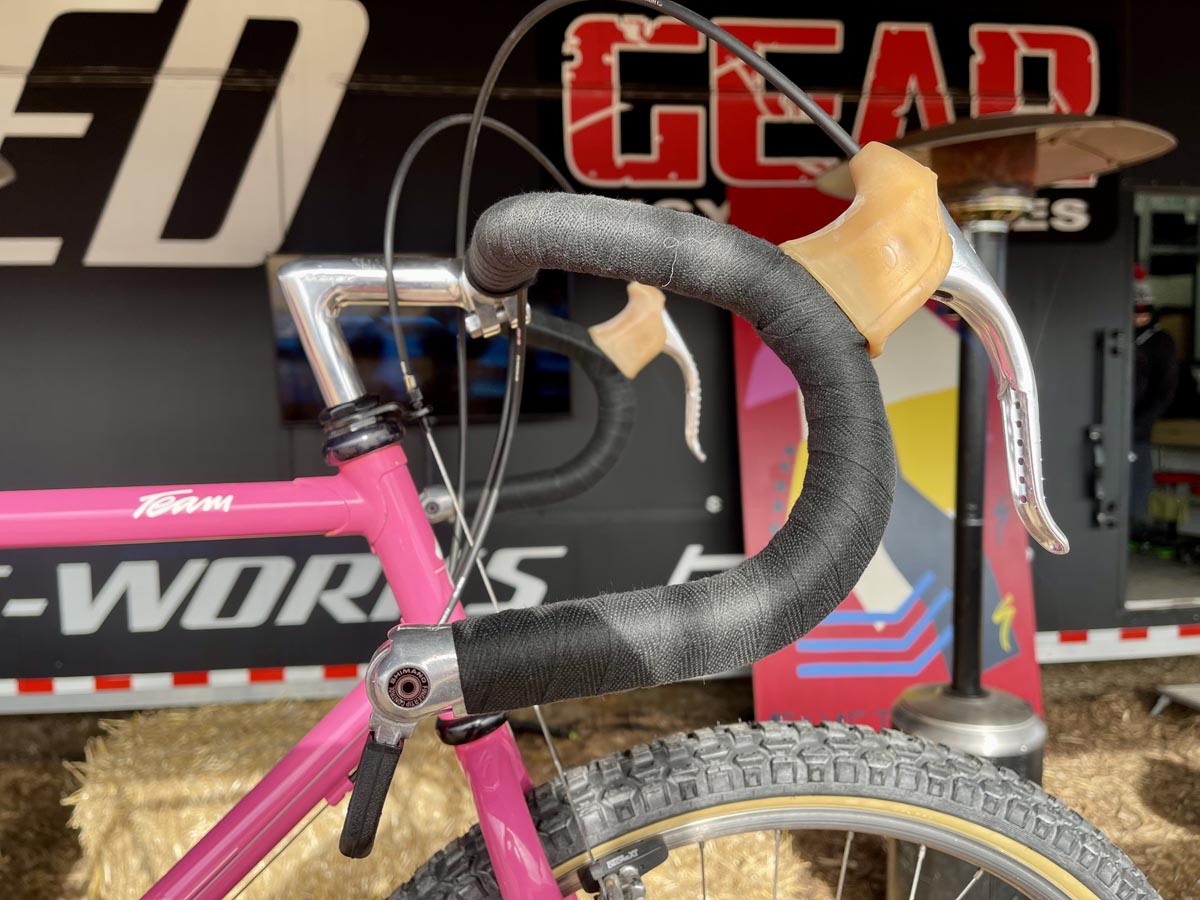 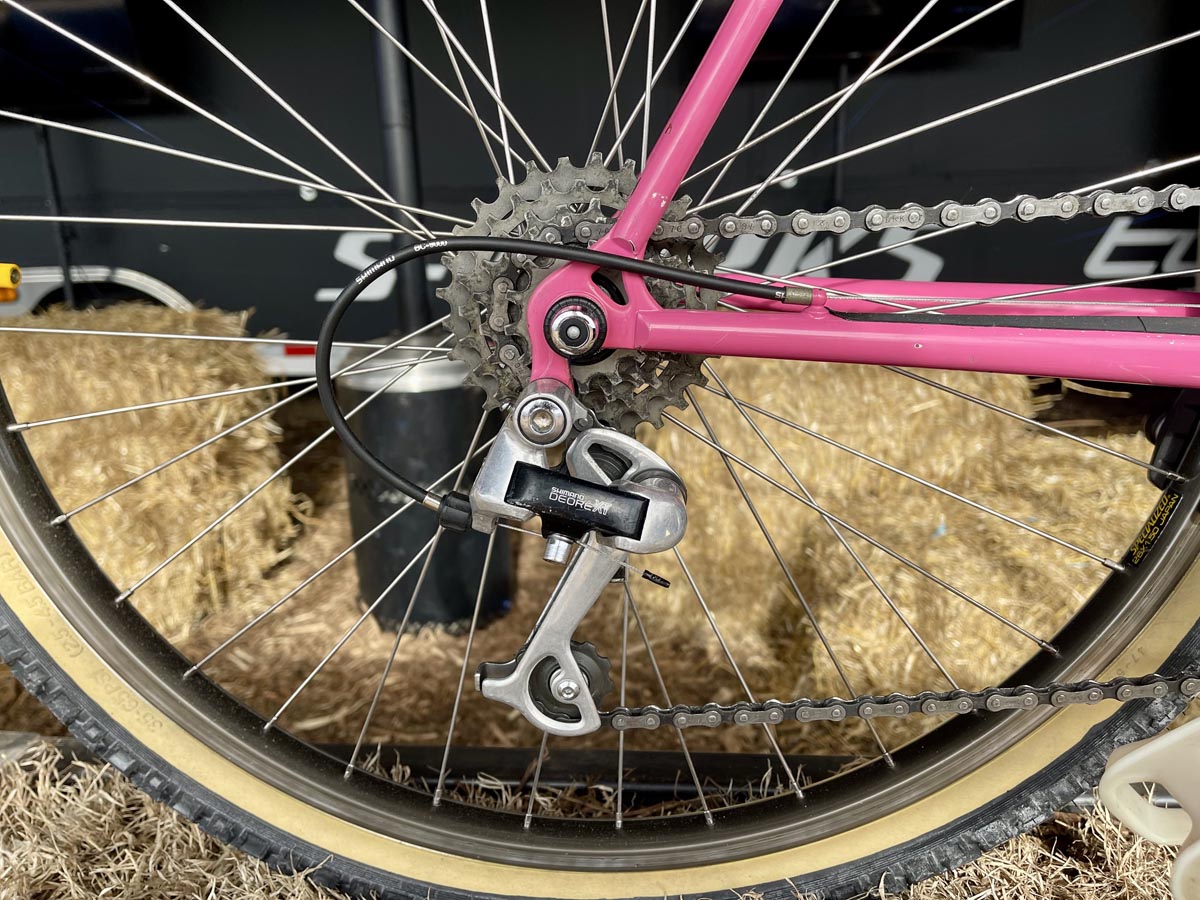 While the original equipment of the bike got the job done, most riders probably aren’t going to want to go back to cantilever brakes and bar-end shifters.

Good lord! Is that a 6 speed freewheel?! I remember when 6s came in. It was all the rage. And bar-end shifters were kinda cool, in a weird way. People used to lend them out if they weren’t doing ‘cross that year. Of course, a few guys – like Paul Curley, I believe – used them year around. Now you’ve got me on a rant thinking about Regina Oro freewheels – 5 speeds – and my first pair of cycling shoes. With leather cleats!

Yeah my first pair of shoes were from Detto Pietro and and had leather bottoms with a steel shank. You had to nail the cleats to the sole with tiny nails. Paul is probably still running bars ends and a wheel cover and winning races.

I wish I still had a pair of those shoes to show people. And shorts with real chamois.

Nope, it’s a 6 speed UG cassette, standard issue with M730 XT, and the beginning of cassette hub global dominance after a few years of reduced enthusiasm in the market.

Whats that first word on the downtube say?

Loved those u brakes, loved my rockhopper comp!

Wow, what a coincidence! Yesterday I reactivated my Stumpy team comp from 93″ and drove it today – what a blast from the past – love it!

I can tell you with 100% confidence that the Team Stumpjumper did not come from the factory with drop bars, as I was working at Specialized when they came out and rode one for years. The drop bars were used by a few members of the team (Lawrence Malone (RIP) and Gavin Chilcott, as I recall).