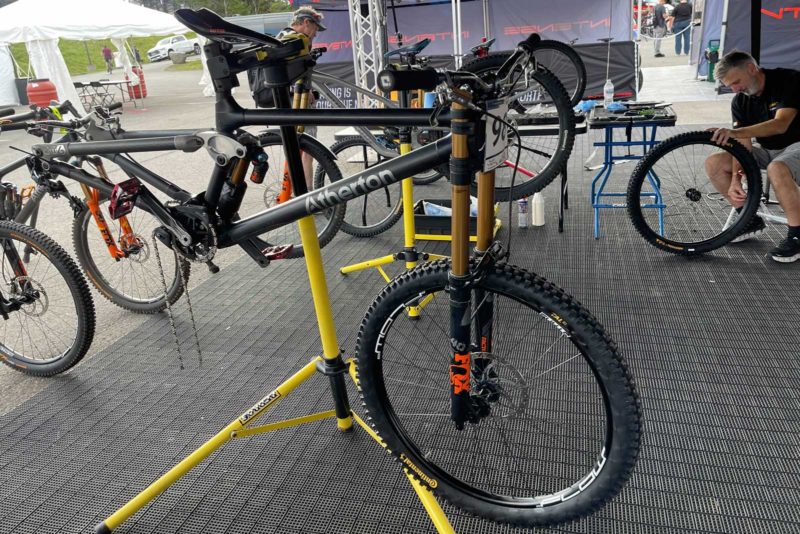 At the 2021 Downhill World Cup finale in Snowshoe, Bikerumor Editor Jordan Villella got eyes on a number of bikes and components yet to be released to the public. Prototype Ohlins electronic suspension, prototype Giant DH bikes, and these prototype Continental Downhill Tires were all hiding in plain sight. Ronan Dunne’s Nukeproof Dissent and Jim Monro’s Atherton Bike were home to two new Conti tires with distinct tread patterns, both sharpied to death in an attempt to hide the hot patch. 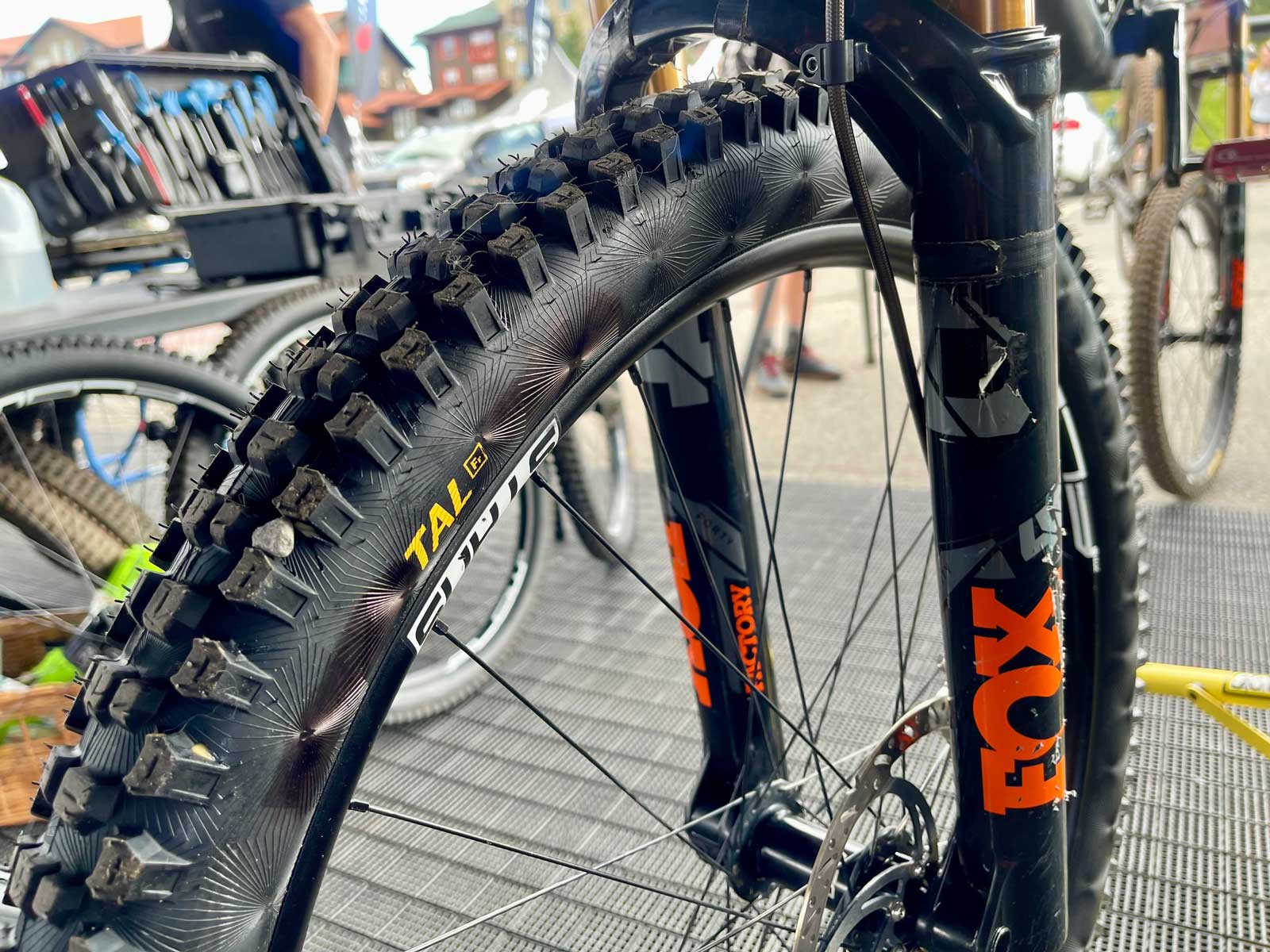 The word “TAL”, the number “156” and “Fr”, placed inside a white box almost like the chemical symbol for Francium, are the only decals we can make out on the new Continental DH tires spotted on Jim Monro’s Atherton Bike. Seated on Stan’s Flow rims with a 29mm internal width, these tires are like nothing else currently available in Continental’s lineup of downhill or enduro tires, both in terms of the wild-looking sidewall pattern and the tread itself. 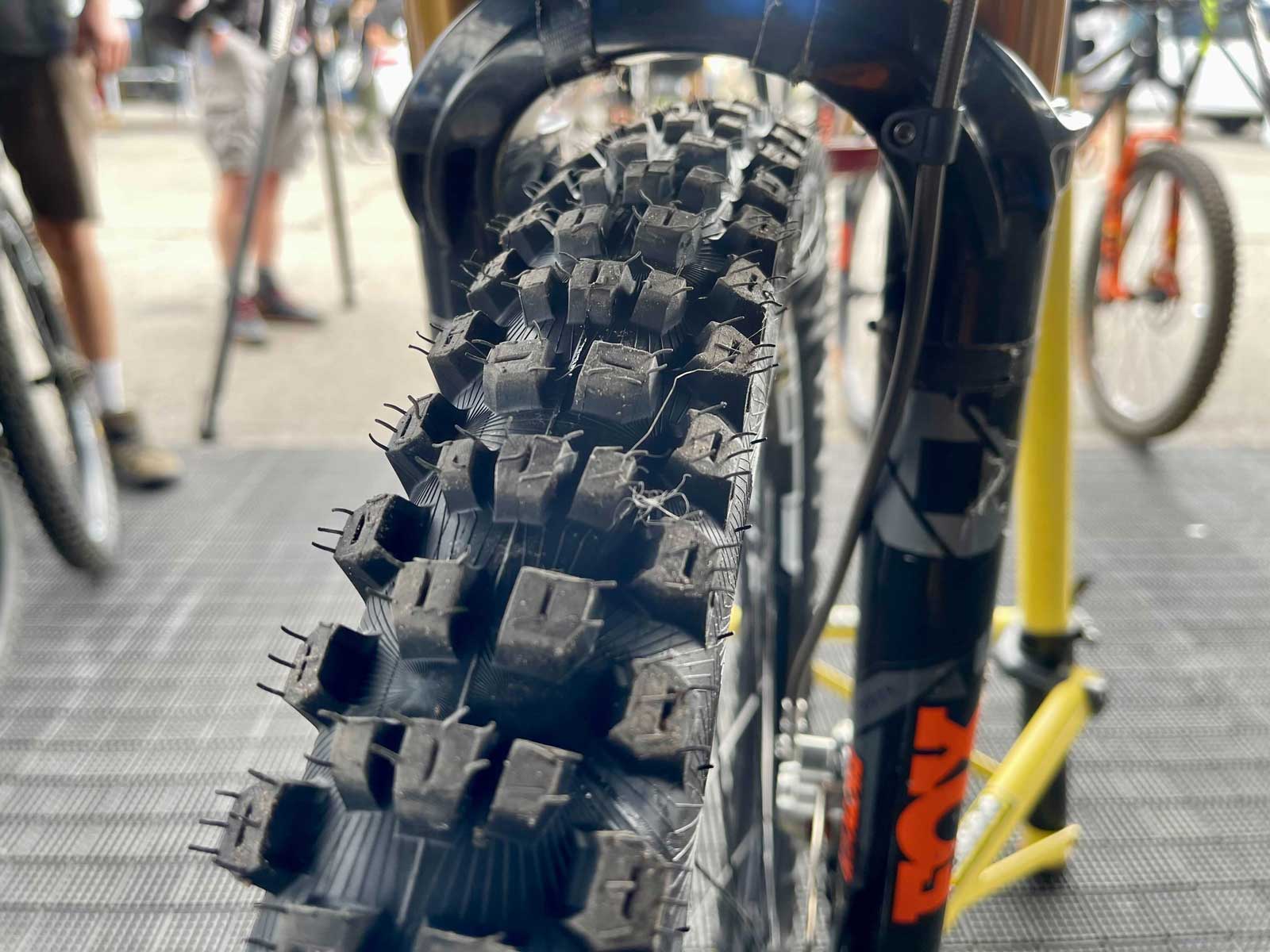 When we swung by the Continental team pits, Monro’s bike was without a rear wheel, so we can’t say whether this tread pattern is also being tested for use on the rear too. The centre tread has two alternating sets of lugs; three smaller lugs with little spacing in between, followed by two larger lugs with a much wider gap between one another. The latter pair of lugs are siped, with every other instance of the paring siped in a different orientation, presumably to allow for flex in the braking plane, as well as some side-to-side flex too. 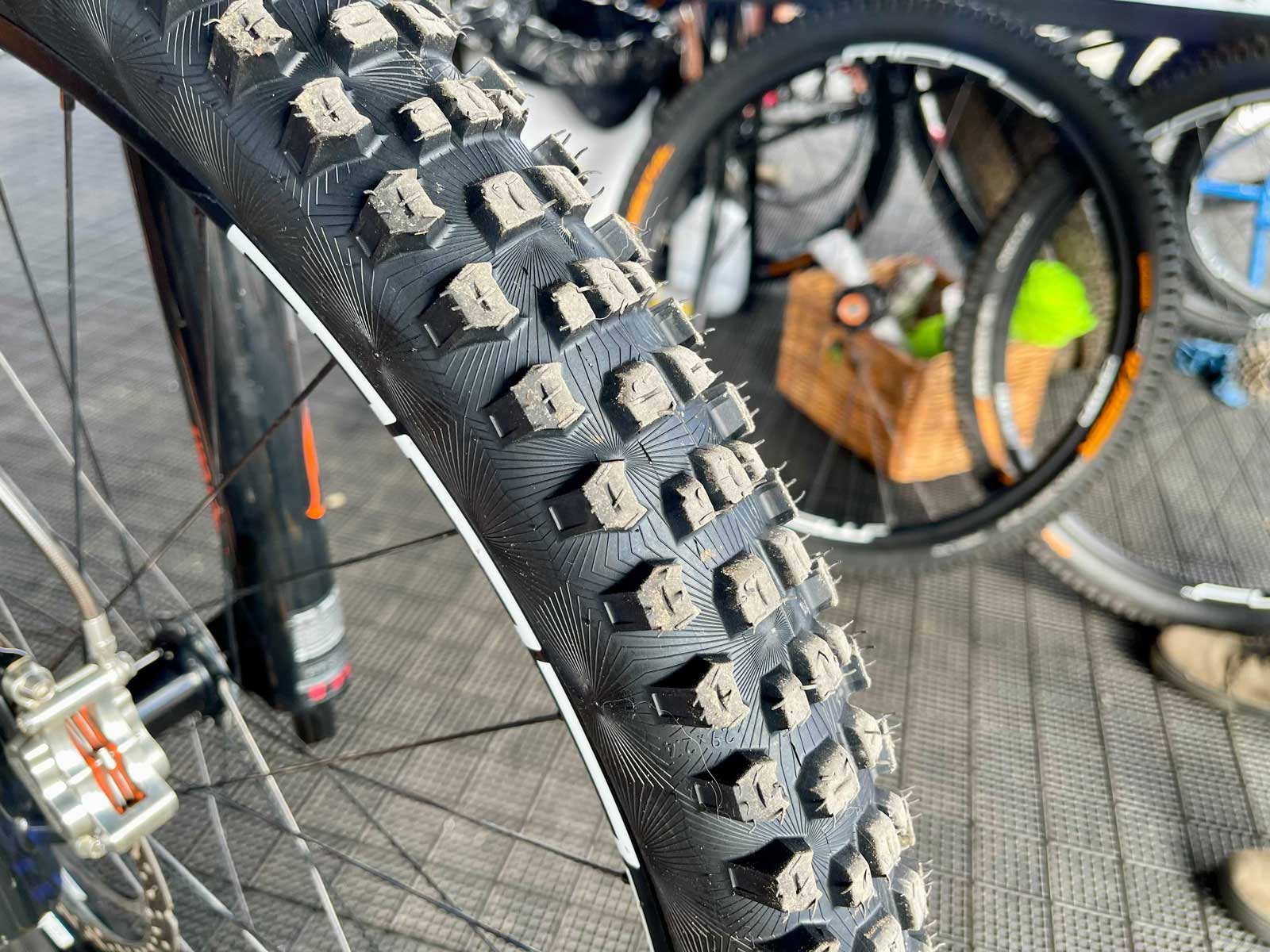 At the edge, the side knobs have an irregular shape, with the corners of the inner face extending out slightly toward the centre tread, perhaps to help grip transition from the centre to the edge when initiating a corner. Every side knob is siped in the direction of travel, presumably to give the knobs a degree of lateral flex for cornering. 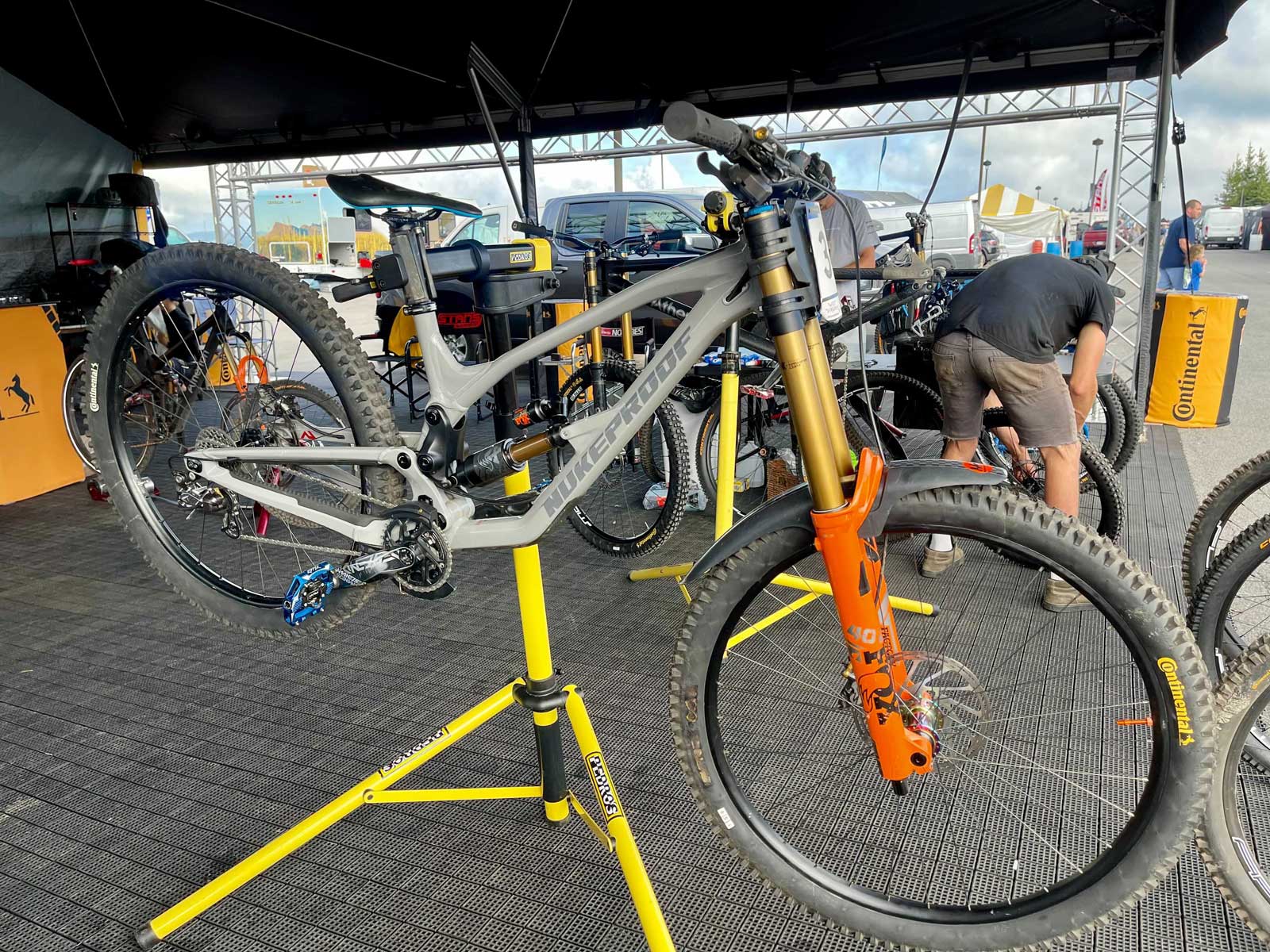 Ronan Dunne’s Nukeproof Dissent was also seen with prototype Continental tires, but with a slightly different tread pattern. This one is a little less busy, with a more widely-spaced open block pattern. Both sets of tires have a wild-looking sidewall pattern, with raised lines of rubber emanating out from a central region, seen in a regular pattern right the way around the tire. 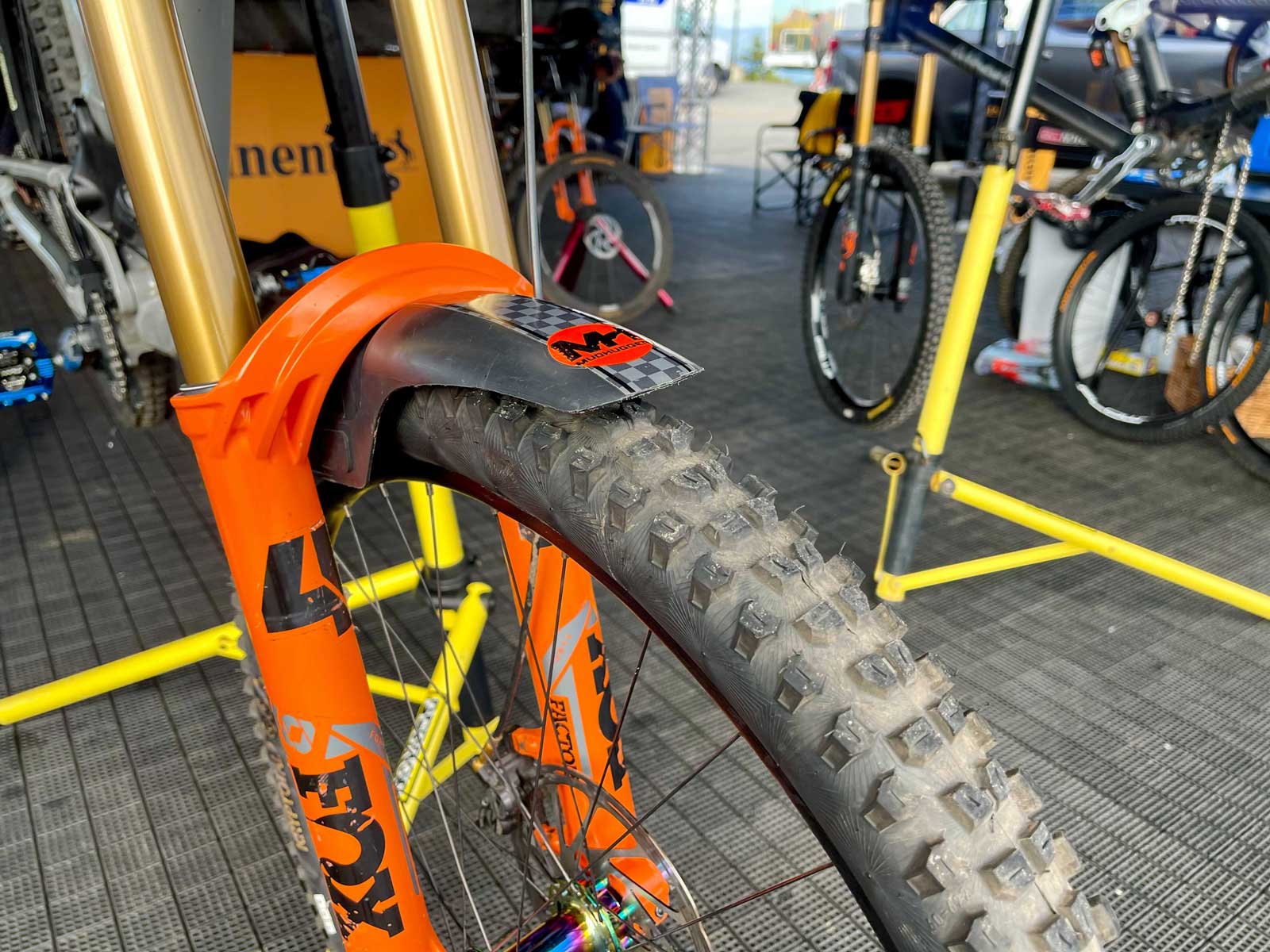 This could be purely for aesthetic purposes of course, or it could be an indication of a new tire construction designed to prevent side wall warp and tire roll during hard cornering…. we could hypothesize all day long. Conditions in Snowshoe were very loose in places, with loose material lying over hard pack ground. Thus, it’s likely these new Continental tires are designed with exactly those conditions in mind.

The one thing I miss about working in a shop was the tires Reps would give us to push. In the Northeast we ‘needed’ spring tires then summer tires then fall tires. Of course we took those SoCal stock tires off cause we ride roots not hard pack.