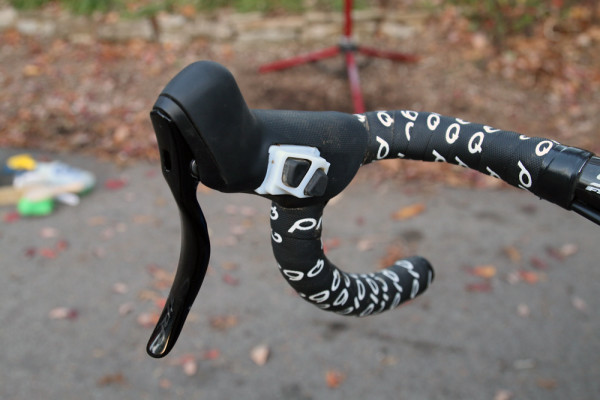 In early 2012 when disc brakes were really coming on strong for road and cross, TRP was working on a project called HyWire. Combining the braking power of a full hydraulic system with built in Shimano Di2 shifting compatibility, HyWire was looking like a very attractive option. That was until Shimano went 11 speed and left companies like TRP in the dark. Without support for the new shifting standard the trail for HyWire went cold.

In the mean time TRP has been working on awesome road and cross disc brakes like the Spyre and HyRd, leaving us to think the Di2 project was dead in the water. That is, until we spotted this latest prototype on one of Ben Berden’s Raleigh RXC Pro Discs. Appearing to be a modified version of their HyLex single speed hydraulic levers, it looks like TRP might be closer to an 11 speed Di2/hydraulic lever set than we thought… 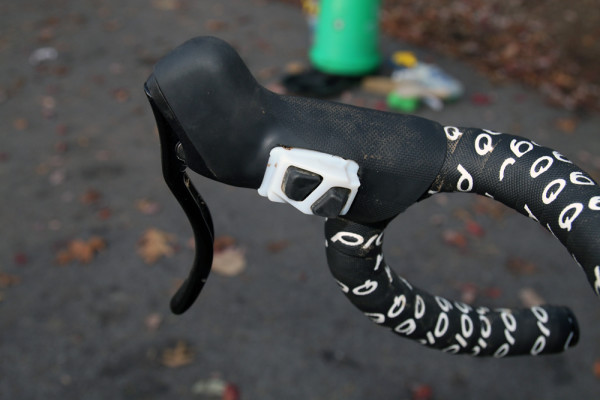 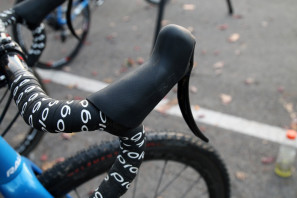 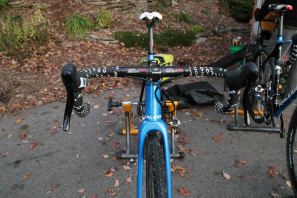 Our first reaction when walking past Ben’s bike on the trainer was why is he riding singles speed levers on a geared bike?” Closer inspection revealed what looks to be a modified Shimano Climber’s switch built into the inside of a TRP Hylex lever. 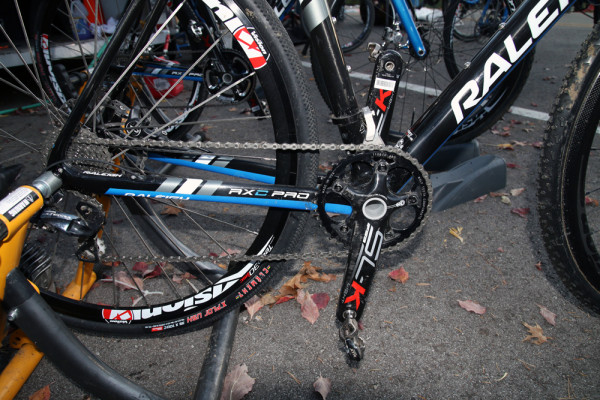 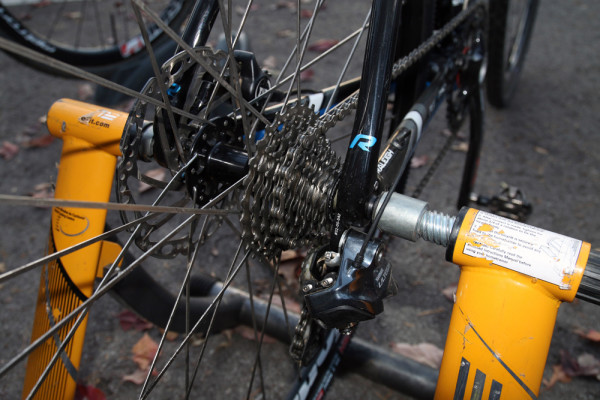 This particular bike was set up with an FSA SL-K crankset running a single Wolf Tooth Components chainring in a 1x set up. That of course means there wasn’t a shifter on the left brake hood. Is this TRP’s answer to CX1? Or perhaps a front shifting version is also in the works – that remains to be seen.

Out back is a standard looking Shimano Ultegra Di2 rear derailleur and an 11 speed Shimano cassette. 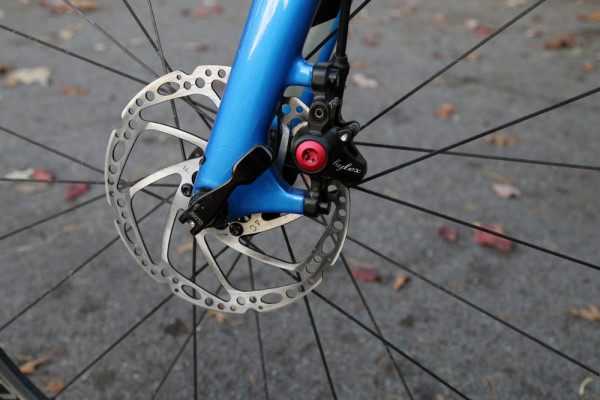 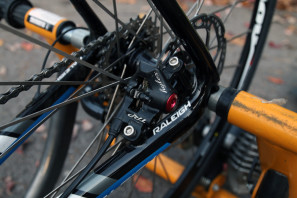 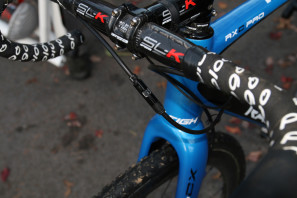 The system was running what looks like standard TRP Hylex calipers which we’re told that Ben actually prefers the feel of. Supposedly once more Di2/Hylex systems are produced Ben will run the system more often because his bikes will all have the same spec. As it was, Ben was racing the version above on Friday for the Cincy3 opener at Harbin Park. Also note what appears to be a hydraulic quick disconnect on the rear brake hose. 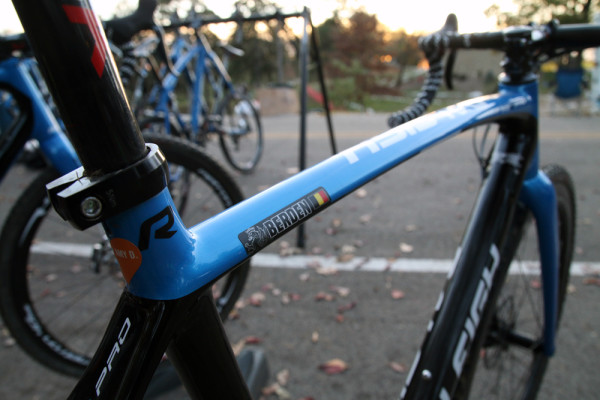 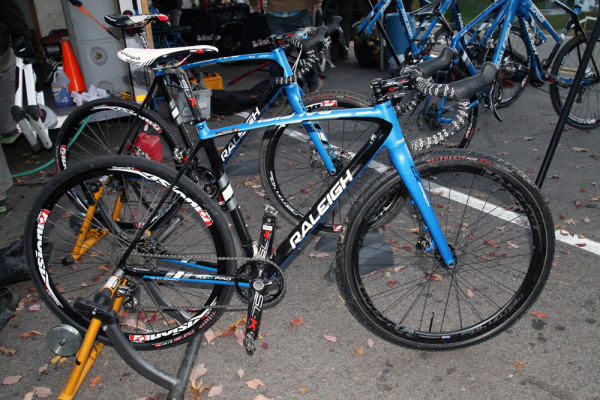 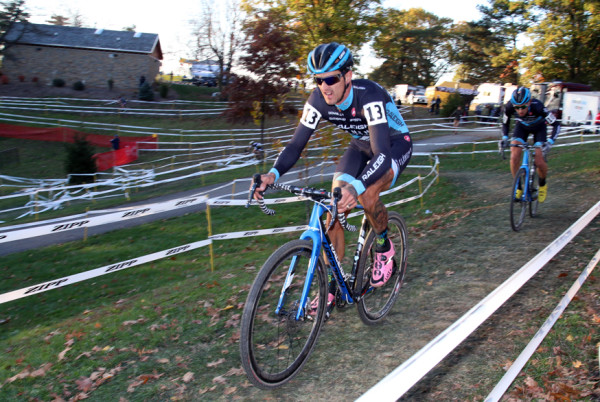 Overall Berden had a pretty good weekend on his Raleigh Clement RXC Pro Disc finishing 4th on Friday, 5th on Saturday, and finishing it out with a strong 2nd to teammate Jamey Driscoll on Sunday.

Is this April 1st?

It’s a DI2 shifter glued to a brake lever.

I have the hylex hydro brakes and LOVE the feel of the gripping area/hoods. Superior to either S company imo, I challenge everyone to find a bike to test with hylex brakes. Awesome…. Looking for more info on this, as I would rather do this than run the floppy Shimano road levers on a CX bike. The hylex are SOLID in the rough and I am way more confident that in a couple years of occasional diggers they will be holding up better than something like shimano where it seems there was a contest on how to put the most small parts in the controls.

That quick connect is probably to make shipping bike easier, just pop the quick connect for packing and no worries about internal routing.

Seriously? My God I hope this is no where near a completed coming-to-market product. That’s straight up shade tree mechanic right there.

There is no possible way that this even vaguely resembles any kind of finished product, or ever will. Shimano is NOT letting other developers use their new E-Tube system, which is why those TRP Di2 levers were essentially vaporware after Shimano introduced Ultegra Di2 (and the redesigned interface).

As CXisfun says, this is just some shade tree mechanic cobbling.

@Roy
Pretty sure DI2 levers aren’t floppy, so I don’t see how a TRP DI2 lever is any less floppy and a Shimano one.

that “quick disconnect” is a j-kit. shimano makes them so they can bleed oem supplied brakes for bikes with internally routing. If you disconect it, you have to shorten the hose and install a new barb and olive, and bleed the brake which you could just do at the caliper anyway. I’m curious why it ended up on a non-shimano brake.

I’ve been running these brakes for sscx and love em, the ergonomics feel better to me than anything else out there. no servo wave though, and they are a long reach, subtract 2cm from your stem length if you mostly ride on the hoods. I would consider doing this on my geared bike if I knew how to hack it.

It looks like they 3D printed a new housing for the climbing switch, so I wonder why they didn’t try to get it smaller and more recessed into the empty space in the Hylex lever that is there from when they were going to be di2 levers before Shimano went e-tube.

I thought about doing something similar last winter until I decided whatever I could do would look worse than that, and I’d probably end up with broken climbing shifter in the process.

they just took the housing off of the R600 switch. nothing fancy going on here

I would think trying to use the SRAM wireless electronic shifting would be easier. Also if they used the XTR Di2 you could get a clutch in there to help with the 1x setup.

I love my Hylex on my SSCX but I do bolt on a Zee RD and 11-36 cassette to race the geared races too sometimes. I have a more-hacky-than-this MTB thumb shifter on an extension arm holding it near my Hylex hood. Waiting for a Retroshift dynasys shifter but this option would be cool. Just unplug and remove the RD and no cable left hanging, no extra weight left on bike (oh, wait – the batteries!).

I have a couple of cross bikes, one geared with SRAM Red 2.0 hydro disc and one SS with TRP Hylex. The SRAM lever feel and performance is far and away superior to the Hylex. The TRPs fade, shudder and squeal. I’m sure others have different opinions but the reworked SRAMS have been flawless all year since they were replaced in May. The Hylex need pads and a re-bleed after 2 months.

To the anon poster: Absolutely do not mix 10 speed and 11 speed Di2 componentry…if you update the firmware, you will render your system useless. They are no longer intended to be interchangeable.

Are the Di2 climbing shifter buttons 10 & 11 speed specific? Where you able to ask Ben if this system works well?

@CXisfun, Kerry Nordstrom: I haven’t heard of any changes between interchangeability. They’re all e-tube project systems.

Can we at least stop calling the Hylex a “single speed” lever. It’s a hydraulic brake lever. They work just fine with downtube or bar end shifters. No single speed components required. 🙂