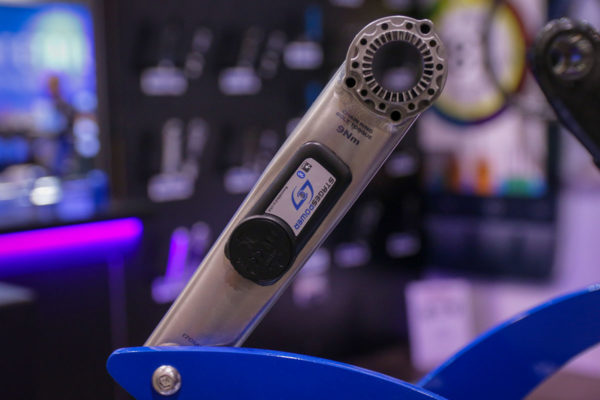 After unveiling their new L50 and M50 Dash head units at Eurobike, Stages Cycling still had more to show at Interbike. Namely, the head units were much further along in actual function, but more importantly – there was a very exciting new option for power meter cranks available. 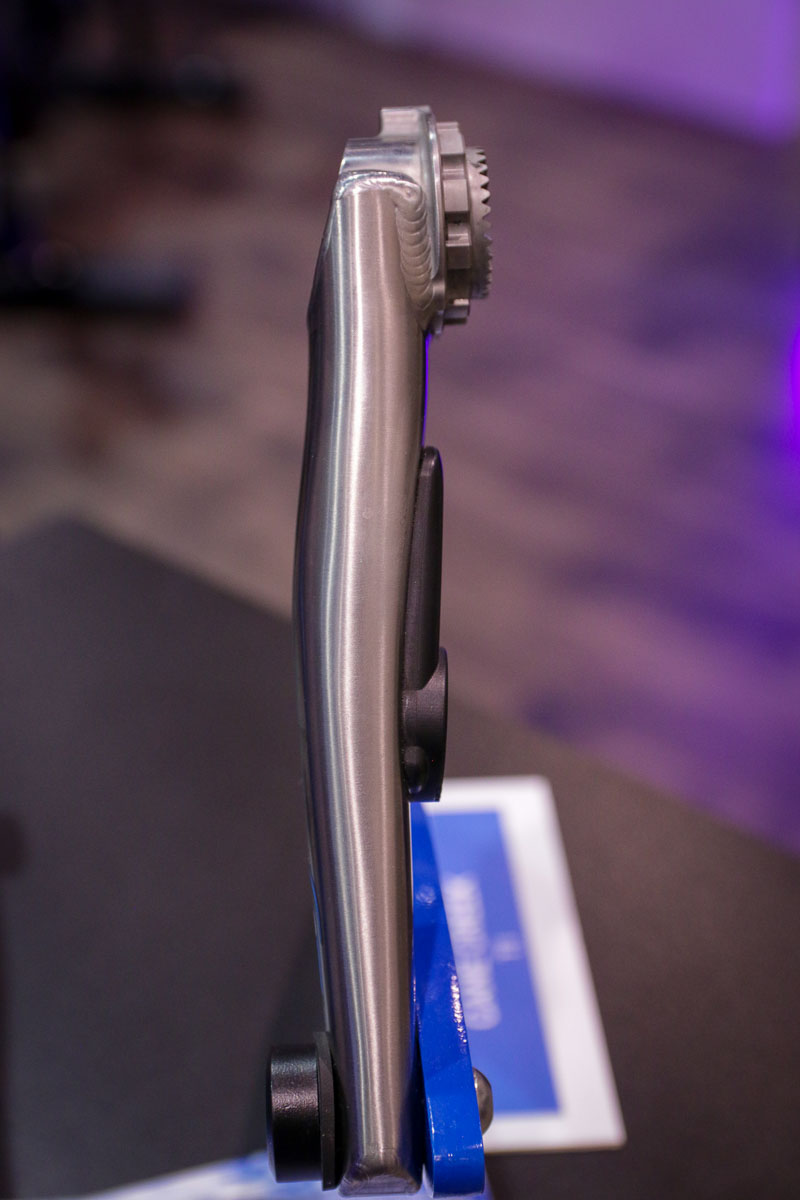 If you’re excited about it, you’ve already heard that Cane Creek has partnered up with Stages Cycling to add a power meter version of their titanium eeWings crankset. Initially available for their MTB version, the crankset uses a unique drive side placement of the power meter due to clearance issues with wider mountain bike chainstays. In this case, the 15g power meter pod sits underneath the chainring, which should clear most frames. We’re double checking their compatibility with 2x drivetrains if you use a direct mount spider.

Stages says that they had to redesign the strain gauges to work with titanium, but other than that the concept is the same. Because of the material differences, they also point out that every one of their power meters is slightly different and tuned to work with that specific crankset. With the introduction of the eeWings power meter, they now have power meters for steel, aluminum, carbon, and titanium cranks. The Stages equipped eeWings are currently available in 170mm or 175mm lengths for MTB at $1,499, and will eventually be available in their gravel cranksets as well. 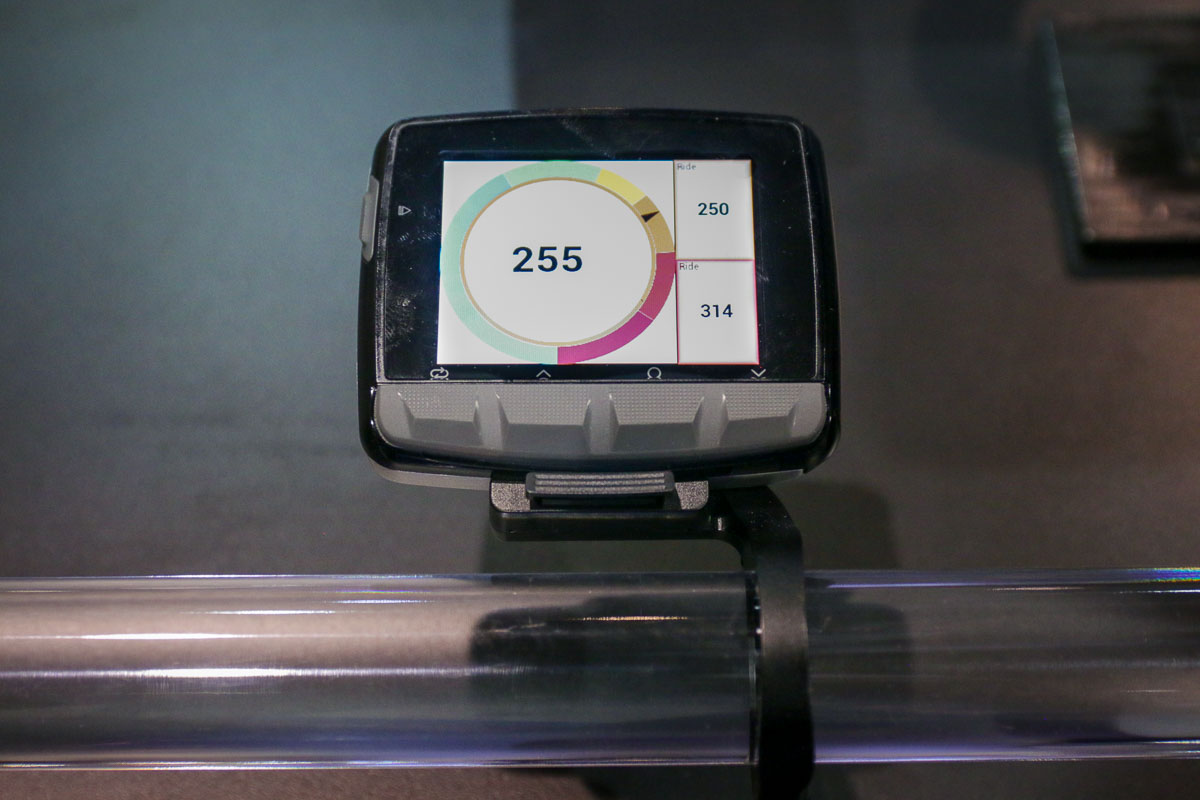 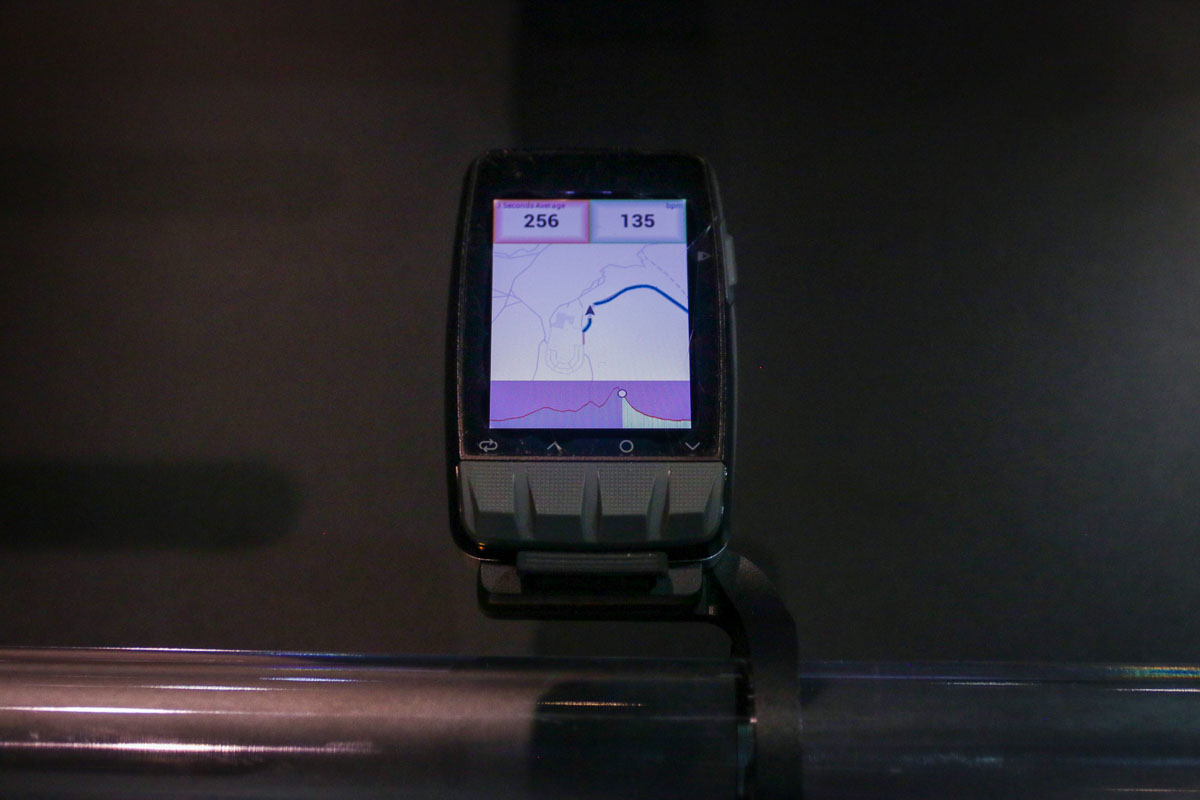 On the Dash side of things, Stages now had working versions of their new color screen which is so bright, it’s hard to take pictures of. That brightness is said to make them very easily read in full sunlight, and it always on which makes their 18h and 15h battery life pretty respectable.

The color screen helps to simplify power measurement and training by color coding everything. That way you can simply look down and know that you’re supposed to be riding in the orange zone during your intervals.

It also makes their included maps very useful by making it clear which roads are the safest routes for bikes. You wouldn’t want to ride on a freeway, which is why they have color coded the roads to help you avoid busy, dangerous routes. Each head unit comes equipped with all U.S. maps pre-installed, and you can download additional maps for other countries free of charge. 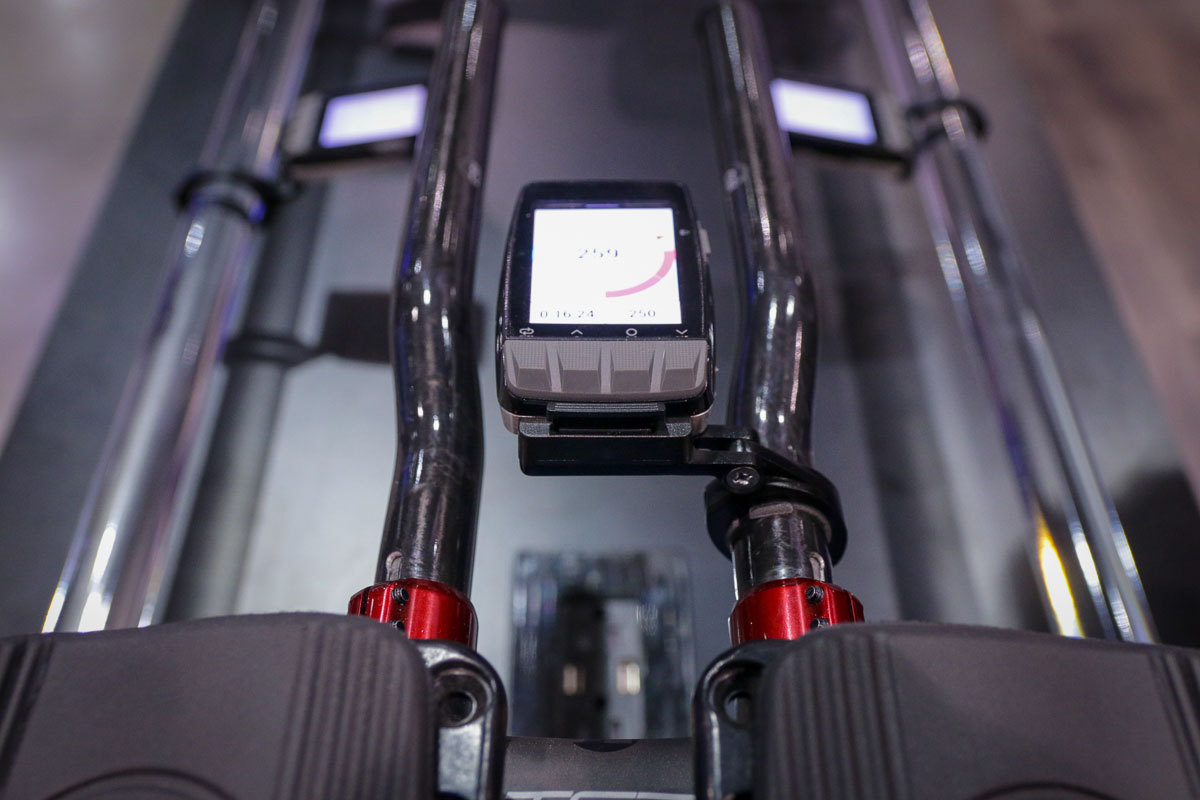 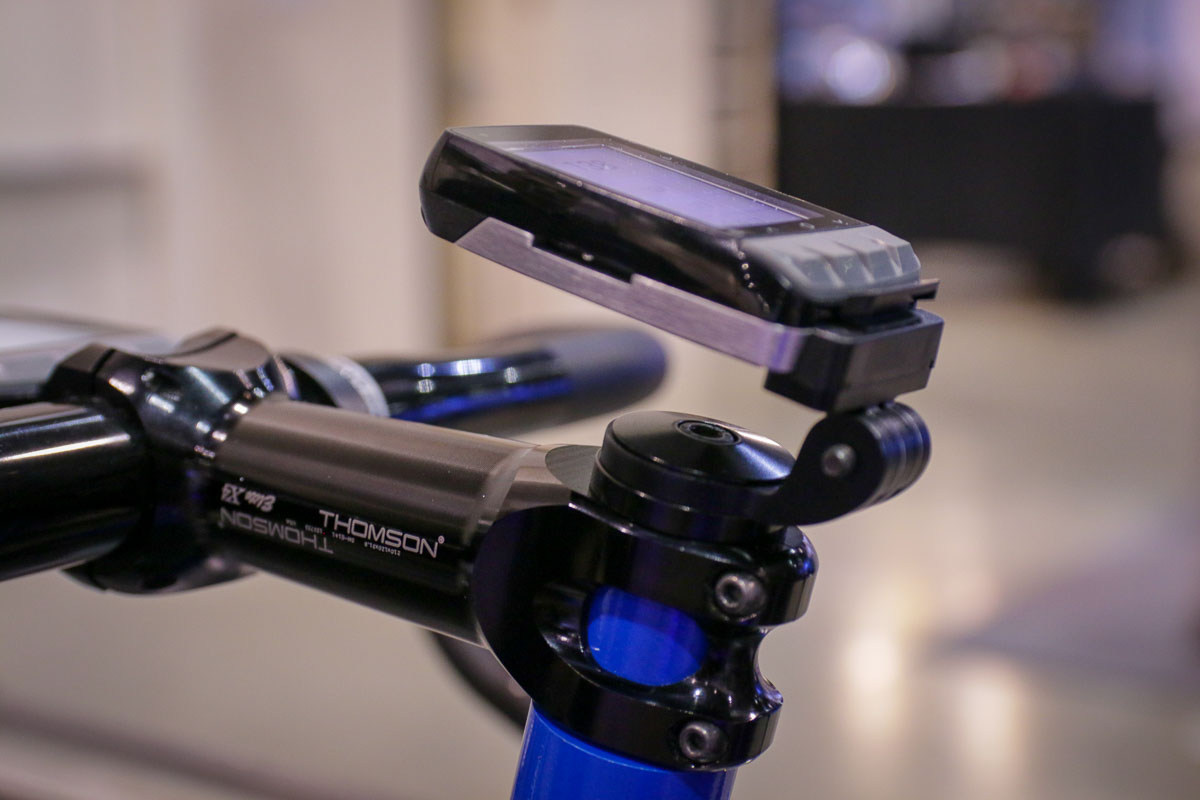 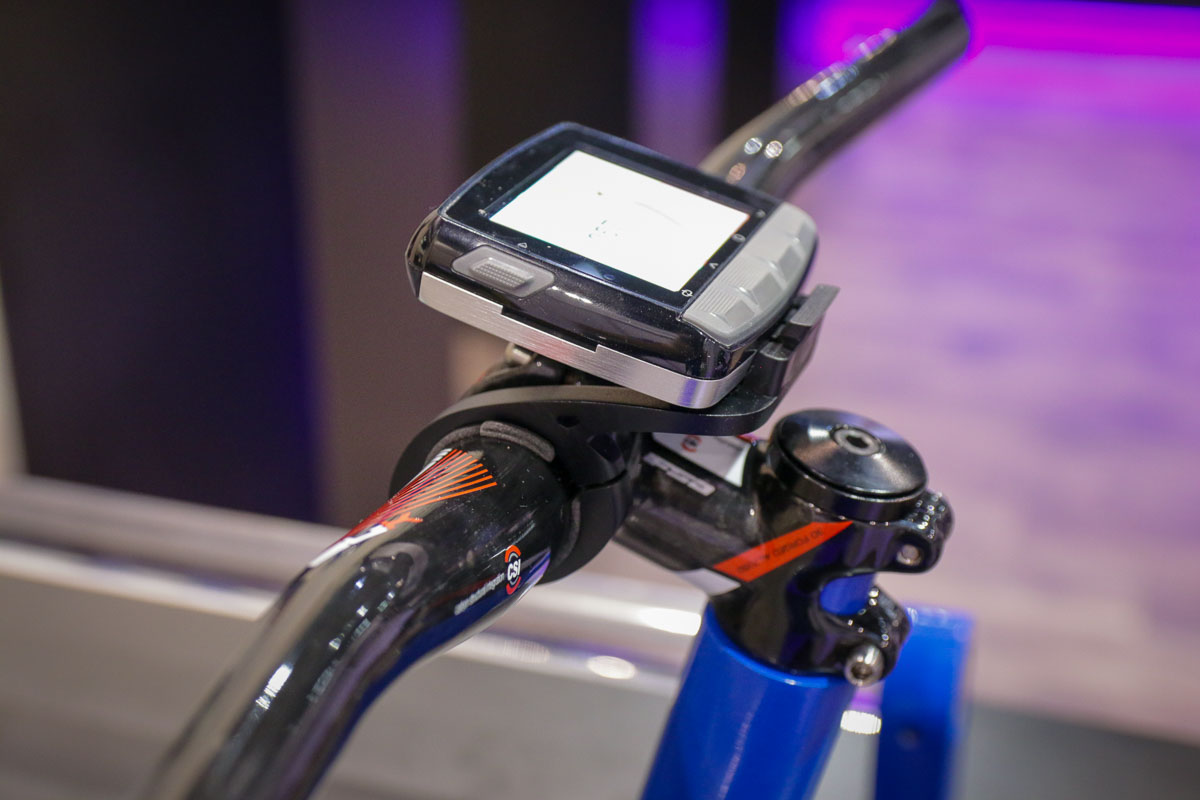 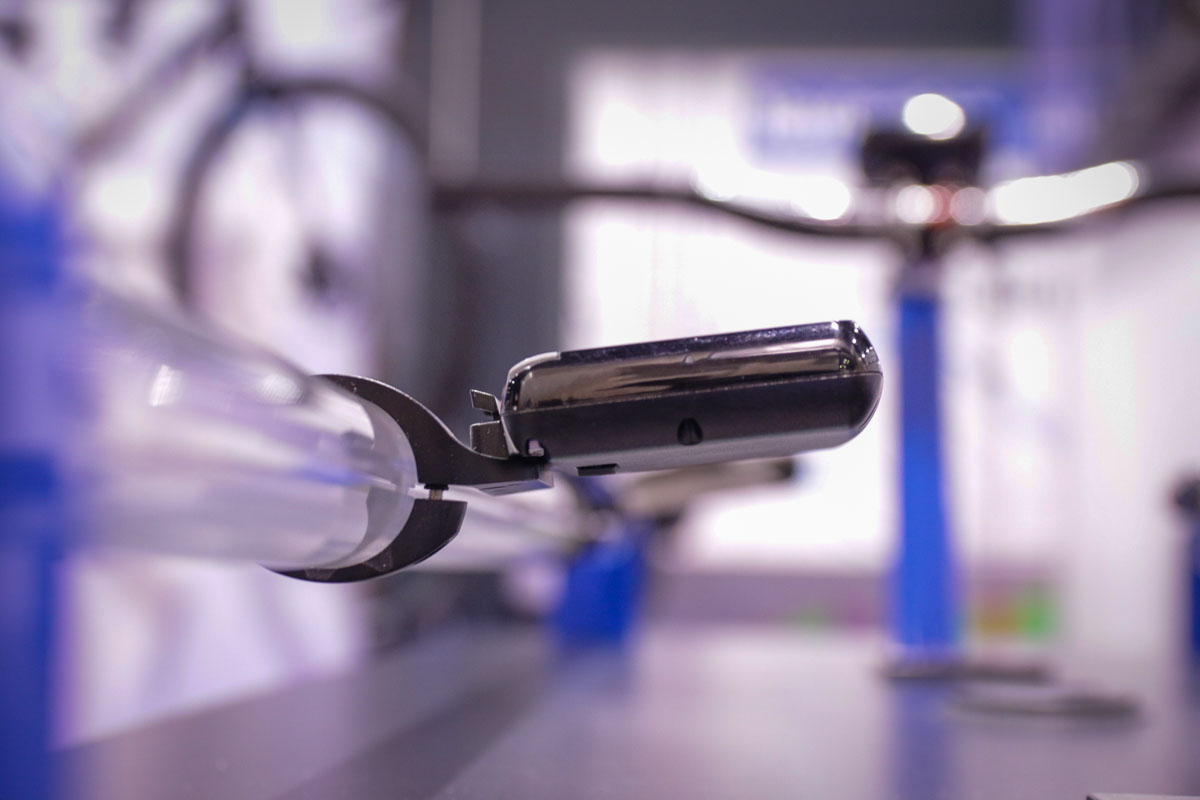 The head units also include your choice of a premium aluminum mount, which attaches to the computer in an aerodynamically efficient way. Stages points out that with most of their competitors, you have to buy a premium mount separately, which is an added advantage of the L50 and M50.

The computers both support GPX, TCX, and FIT routes, have ANT+ and BTLE connectivity, allow for custom data fields, and integration with the Stages Link online training platform. Available in November, the M50 will sell for $249, while the L50 is $349. A third monochrome (non-colored) computer called the L10 will also be available as an entry level device for $149.

riding a bike use to be a simple wonderful carefree thing, why have we gone and complicated it

you’re not obliged to use it or buy it, but you can if you want although admittedly it may look a little odd on your draisienne though…

Yes, why would we complicate it, asks the guy commenting on the website for the latest updates in bike tech

Interestingly loads of people still find cycling a wonderful, carefree thing to do even if they do have bike computers and/or power meters on their bikes. Granted, it’s not as simple as it was during the salad days of cycling, the days when men–and definitely not women–rode their velocipedes while wearing silk knickers, thick woolen jackets, and top hots, but it’s still pretty awesome. If there’s any downside to cycling today as compared to the golden era of cycling 200 years ago, it’s that those damned pneumatic tires have killed road feel.

Ah the good ole days of brakes not really working, doing 48 rpm up every climb, clincher tires riding like round dog turds and leather chamois. Yeah I’ll take a head unit that provides safe routing. I travel a bit for work and nothing sucks the fun out of cycling much more than having a head unit or an app route you onto a freeway or insanely busy road.

just set a pb, look out folks here i come, even though my left hand is putting out 5 watts more than my right, damn you imbalances