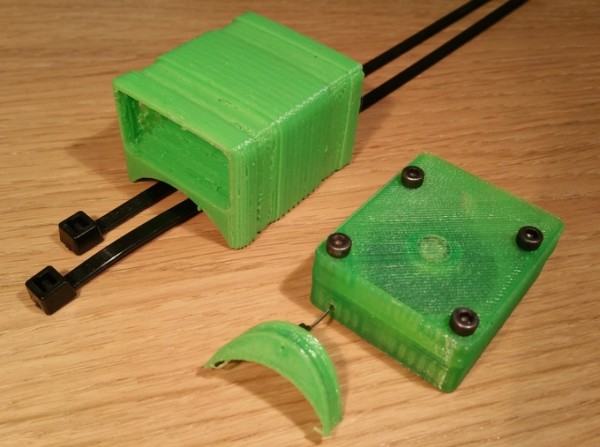 After getting a glimpse of the SussMyBike suspension setup tool, it left us with some questions of how it works and whether or not there would be interest in it, so we reached out for more information. Armed with more details, on paper it seems pretty impressive. Coinciding with the big reveal, the device is now on Kickstarter as well.

Spring past the break to see what it actually does and an update on the gadget’s status….. 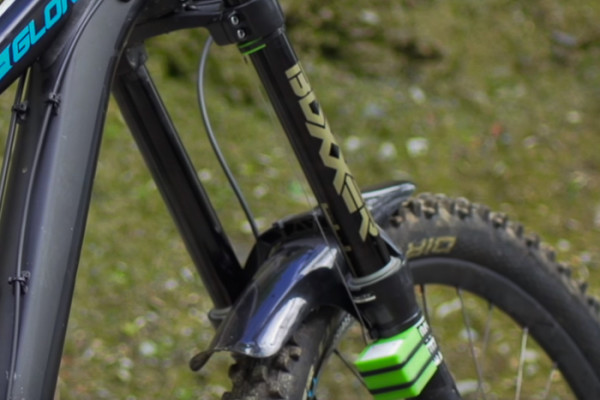 All photos courtesy of SussMyBike

We covered the basics of the device recently here and made some guesses as to what it would do, and now it has been confirmed. Their Kickstarter page is now live and in a short amount of time, they are just shy of their goal, so things are looking up for SussMyBike. 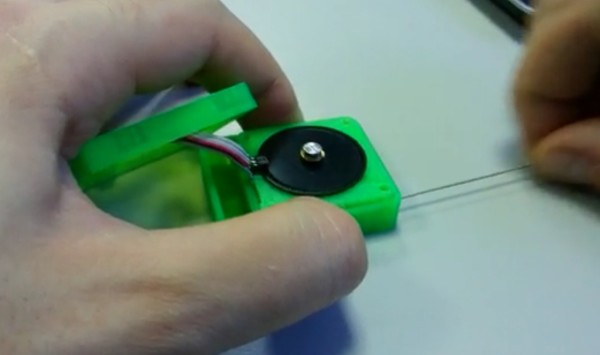 The unit houses a small Bluetooth 4.0 transceiver, microprocessor, battery and sensor. A metal cable is retained on a reel. This is held in tension by an extremely fast retracting spring so that the cable’s movement accurately measures that of the fork’s. Using a 3 volt coin cell battery, the unit should run for several months. Based in Scotland, the unit has been exposed to a lot of the wet and grimy conditions that the country is known for and they’re hoping to achieve an IP65 water resistance rating. They’re using zipties to mount the prototype but mentioned they’re looking into a more finished design that is secure and easy to mount and remove. 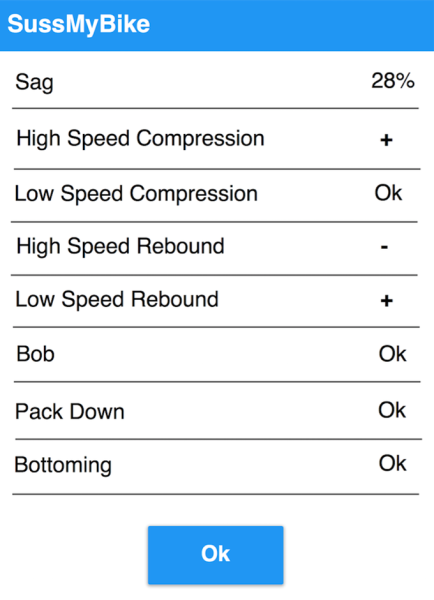 Above is a mock up of what the app’s screen could look like. SussMyBike monitors not just how much the shock moves, but looks for how it moves through its travel. It measures high & low speed compression  rebound, records bottoming out, the dynamic sag while you are riding and the progressiveness of shock. You basically start the app, ride, check the app which will make setting reccomendations based on the fork’s performance. There is no calibration needed.

Here is what it takes into consideration:

You then simply make the recommended changes and try it again. Once it’s reading a-okay on everything you’re set! Of course there is always room for personal taste, but if this works like it’s supposed to, we could be seeing this anywhere from the local trailhead to the world cup circuit.

They’re shooting for a June 2016 ship date so we’ll be keeping our eyes peeled and hope to give the unit a shot.

I like it, even though I’m comfortable setting up suspension for myself I’d still consider this a good way to know if I’ve gotten it right. While riding it’s easy enough to know when you’ve got it wrong, but hard to know how close to optimum your setup is.

For years we’ve seen pictures of bicycle and suspension manufactures with all sorts of measuring devices attached to prototypes forks and rear suspensions. Curious why they never tried to monetize that technology?

@Larry – There are companies that make measuring equipment for professional companies. The problem is that most consumers do not have the money or need for the level of gear that they make. It’s also typically specific hardware for each bike. But you can get a lot more accurate information than the consumer grade devices.

And Dang! You need to find a better 3D printer or calibrate the one you have. That is terrible quality.

And who gets to decide what’s ‘optimal’? An XC racer, weekend warrior, or freerider?

Unless this device knows the ground contour, it can’t know what motions to expect from the suspension.

Until these questions are answered, I’ll stick with my K2 Smart Shock “Pundits say its an unfair advantage”

@pfs “And Dang! You need to find a better 3D printer or calibrate the one you have. That is terrible quality.”

Id assume that is the whole point of the Kickstarter is to get better tools and materials to make the product nicer.

Ol’ Shel’ is right.
furthermore has everyone a different feeling about “what is optimal” for my ride. everyone has his own preference & therefore i cannot believe, that this thing could do a good job – except for the ones who don’t know what to do in any way & these don’t worry about a terrible tuned sus fork 😉

Yes, everyone has a specific desired suspension feel, but by and large, proper damping for control, for given terrain, falls within a narrower margin than most would believe. I’ve known many that think their suspension was set-up properly, and due to lack of info/experience, had no idea that it wasn’t. To them it “felt” correct because they had no comparison, but was far from optimal with regards to wheel control.

This can be a useful, objective “3rd eye” and can help one better tune or modify suspension. From there, one is free to fine tune based on feel. The kicker will be the price.

Trust me, I understand prototyping. I do it every day on the 3D printer that I designed and built myself. But that is just poor quality. A correctly operating printer should be nicer than that.

This seems like a brilliant device. If I was still in retail and setting up bikes I would buy one of these and hire it out to customers for a week a time. Making money off both hiring it out and providing the bike setup advice to go with it. For a bike fitter dealing with a suspension bike I see this as a brilliant tool to not only make more money from a service but to provide a better service to the customer. I would expect smart retailers everywhere to be buying these up quickly, but instead I guess most will just keep on moaning that “the inter-web is taking away my business, whaa, whaaa….”

As for the price, I wouldn’t buy one for my own personal use, but chipping in with a couple of friends and sharing it when required would be the way to go.

And to those doubters above, you are missing a few key points that @JBikes has alluded to.

If it works, it’ll be very useful. A version for motorcyles would sell well.

I concur with Axel. Seems like a great idea. Too expensive to buy alone, but I really hope a store in my area will buy them and rent them.

Get this linked up to Strava or a Garmin and overlay the suspension data over your route; that’ll be another whole level of analysis. Or just have the data be readable over time. Then you could see how the suspension was performing at different portions of the track and if it made/lost you any time. Interesting product, can’t wait to see it on the market. If I was racing DH every weekend I’d definately pay a small fee to rent one for a few runs during warm-up/qualifying.