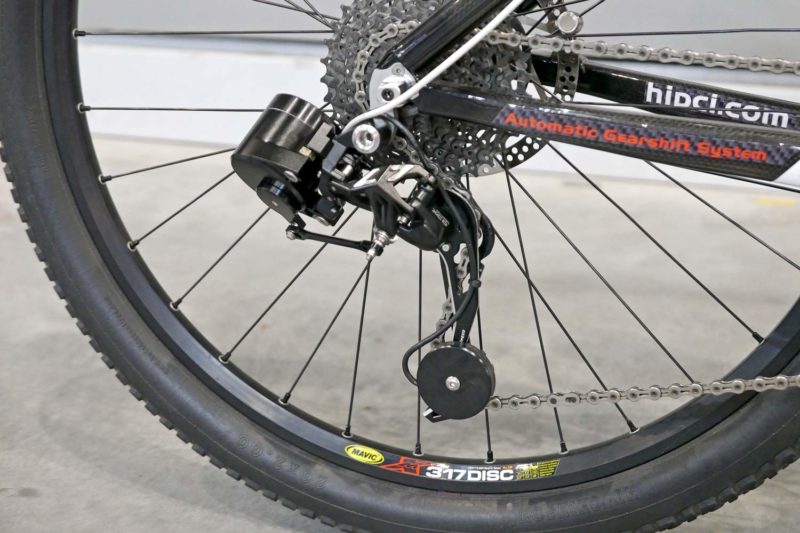 The Automatic Gearshift System from Taiwanese engineering firm HIPCI takes electronic shifting 1x mountain bike setups to the next level, entirely eliminating the need for a shifter altogether. By incorporating both cadence & bike speed sensors directly into a smart rear derailleur, the AGS can be customized to automatically shift you into the perfect gear all the time, with no need for user input. 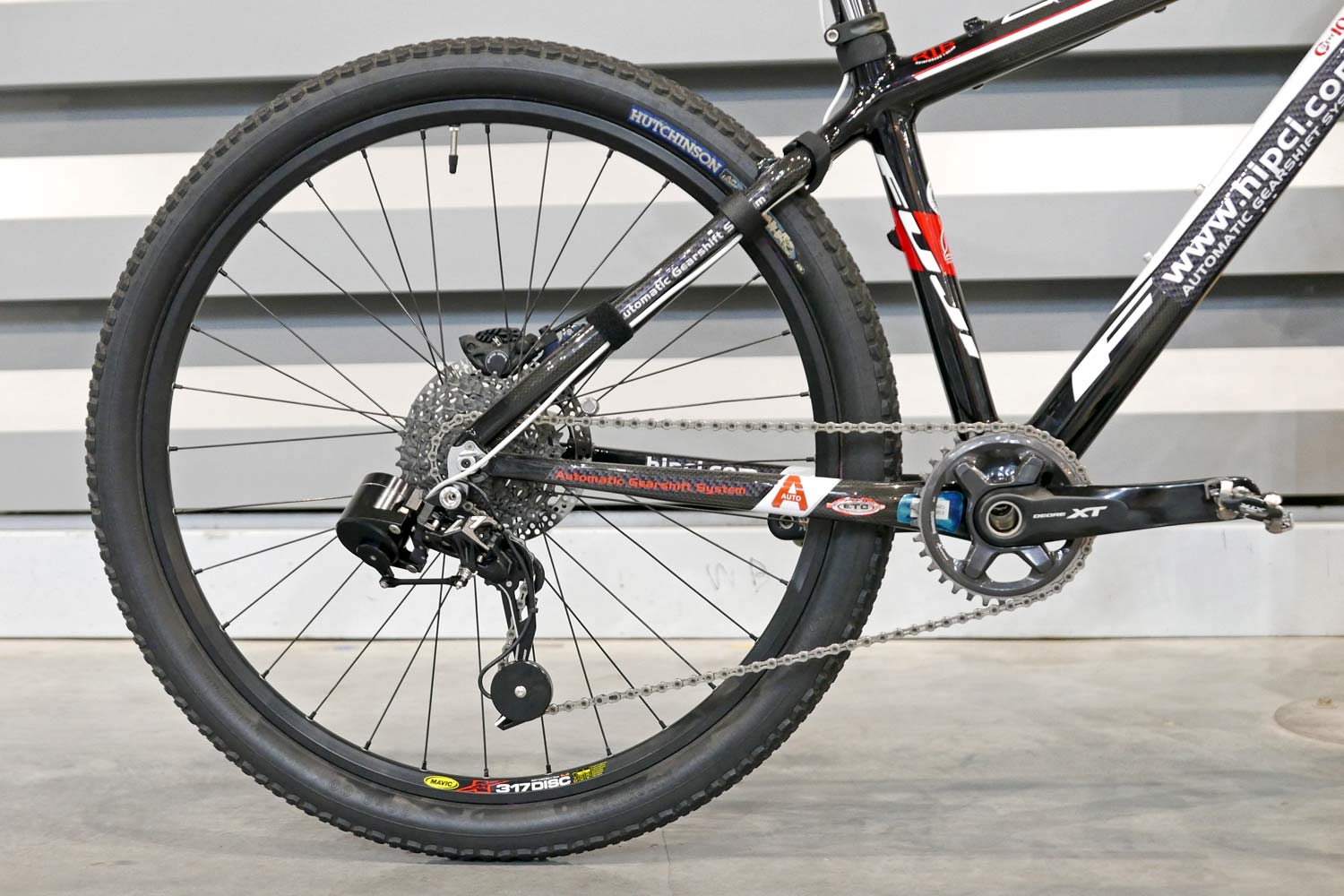 The concept behind this prototype smart mountain bike derailleur is simple: once you set it up, the bike is always in the perfect gear. This is not the first time we’ve seen an automated gear shifting system on a bike, but pretty much every previous functional system we’ve seen work has been rather complicated or clunky. But now that mountain bikes have truly adopted 1x setups with wide range cassettes, the possibilities of a simple, truly automated shift setup is much more feasible. 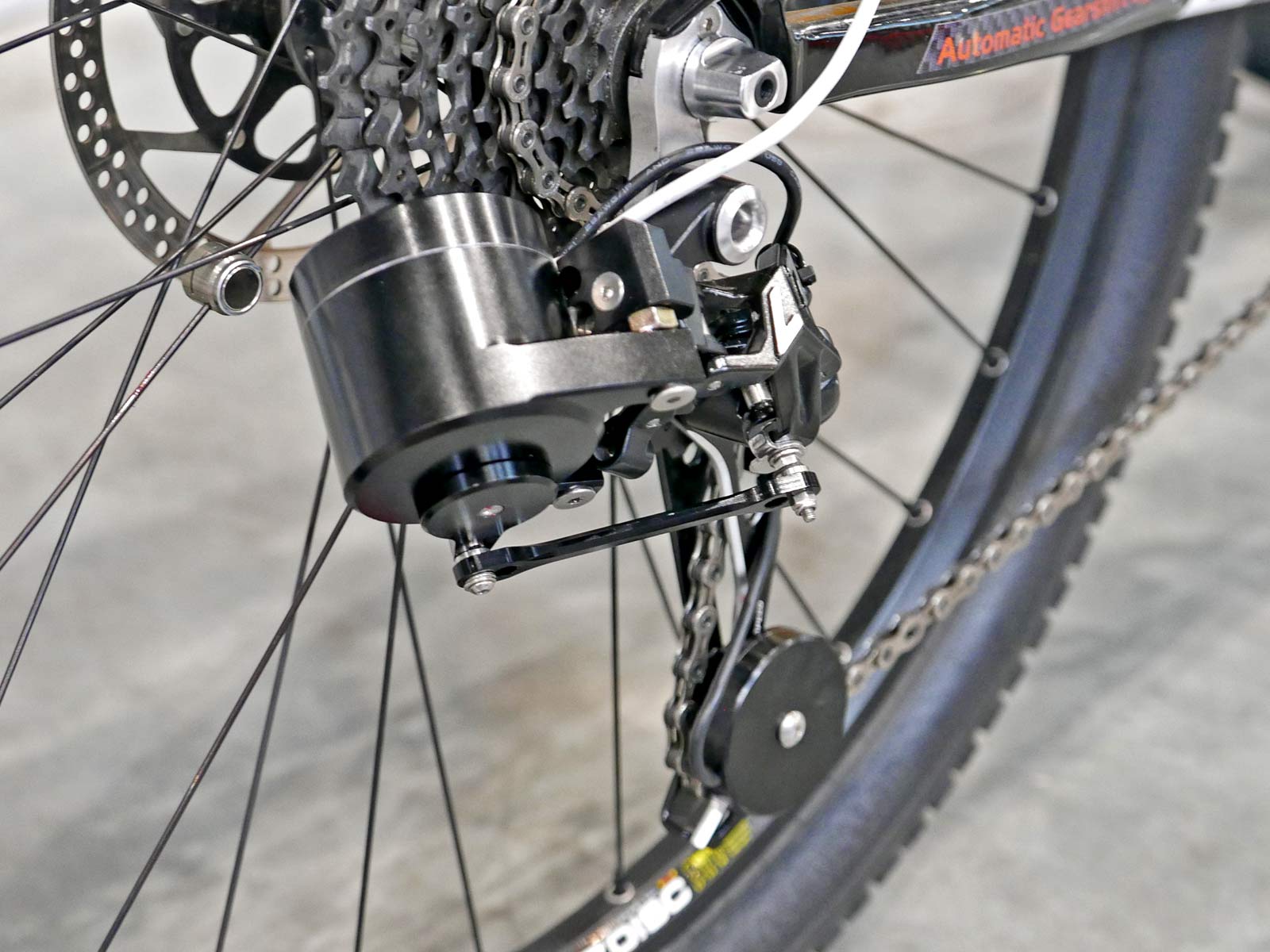 This setup is still in a prototype stage, or rather a proof-of-concept stage, built on top of an off-the-shelf MicroShift 1×11 XCD mechanical mountain bike derailleur (not MicroShift’s newer version with a clutch released last year.) The idea of the design team was to develop both electronic shift mechanics AND automated shift sensors & controls that could be but into a single self-contained smart rear derailleur.

While HIPCI is a name we’ve never heard of, the design engineers behind the project have worked on unique drivetrain solutions in the past, like their previous derailleur pulley-based dynamo designed to recharge electronics as you pedal. They are essentially showcasing their technology, in hopes of drumming up further support to develop a more refined, production ready solution.

So, how does it work? 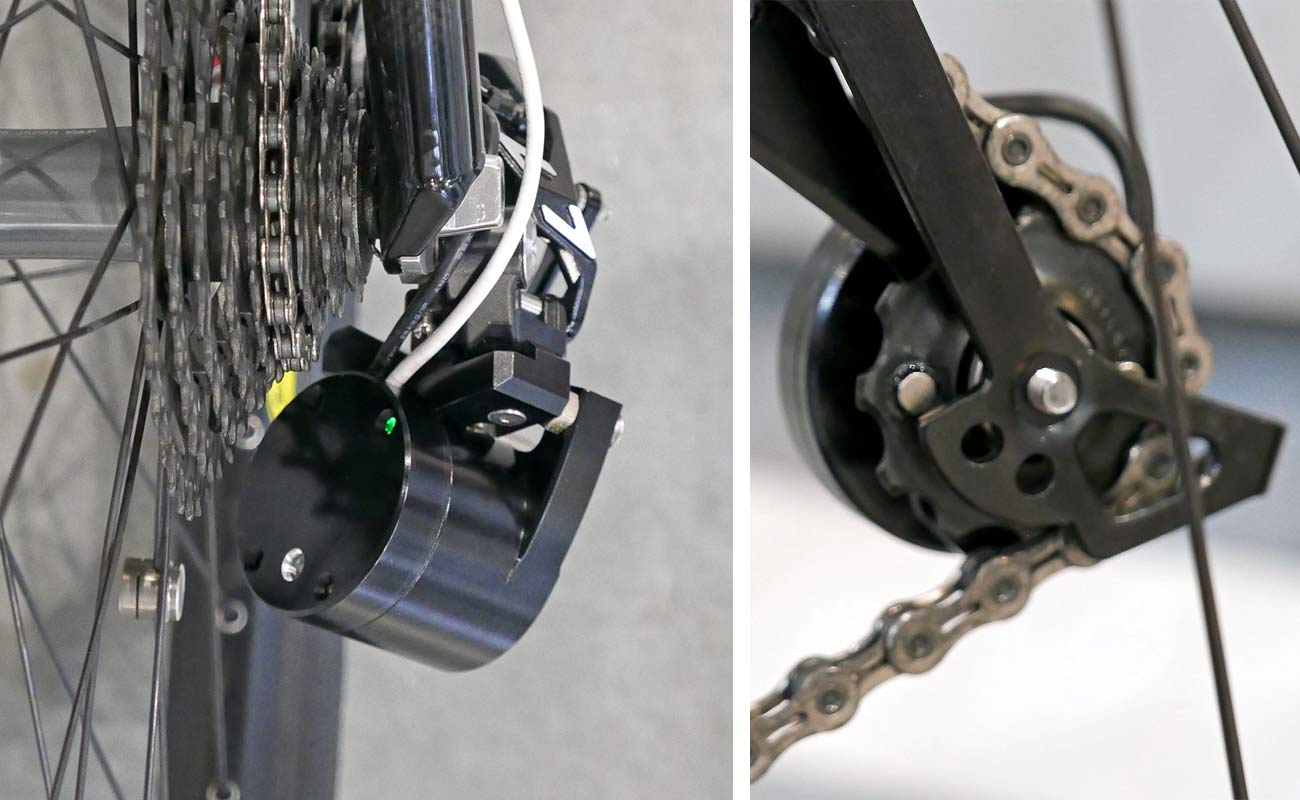 This Automatic Gearshift System prototype bolts a machined alloy housing directly onto the back of the XCD derailleur with an internal electronics controller and an internal motor that actuates the conventional mechanical mountain bike derailleur.

Inside that main alloy housing is also a wheel speed sensor that registers each time the spoke magnet passes by, providing bike speed data. The system currently uses two wheel magnets because it give faster data sampling (two inputs per wheel rotation), but ultimately could use any number of magnets. A black control wire also runs out of the top of the housing to another sensor located on the lower derailleur pulley. There, a magnet imbedded in the pulley wheel registers the speed at which the chain is moving past. And since the system uses only a single chainring setup, this is interpolated into actual pedaling cadence.

The only other connection for this prototype Automatic Gearshift System derailleur is the white wire that runs to an external battery pack that the developers have located in the saddle bag. For now they were using a standard compact lipstick-sized powerbank of around 3000mAh that they said would run the drivetrain for around 40 hours. 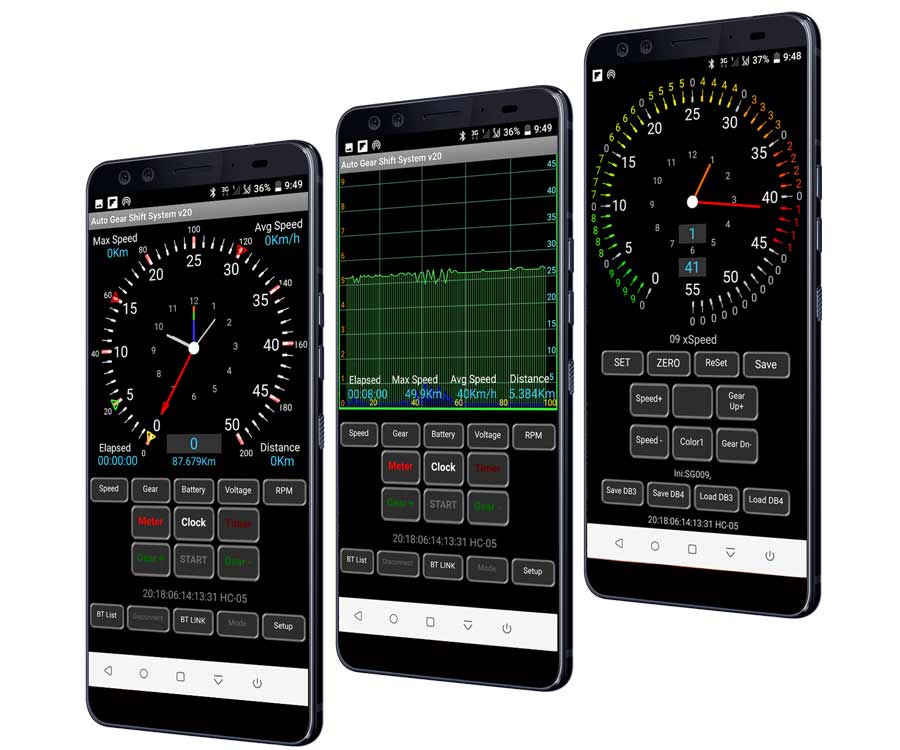 With bike speed & cadence data inputs, the internal brain of the derailleur can be programmed to automatically shift into an ideal gearing ratio, with separate up & down shift points based on these two data points, plus the option to prioritize speed or cadence data when choosing to shift. The whole thing is adjusted via Bluetooth from a mobile app interface (currently Android-only) that lets a user fine-tune it to their riding style.

While this version does not yet include any more data inputs, the design team said they are working now to communicate with power meter data to further optimize shifting based on rider power, and to make it smoother to shift under periods of decreased load. 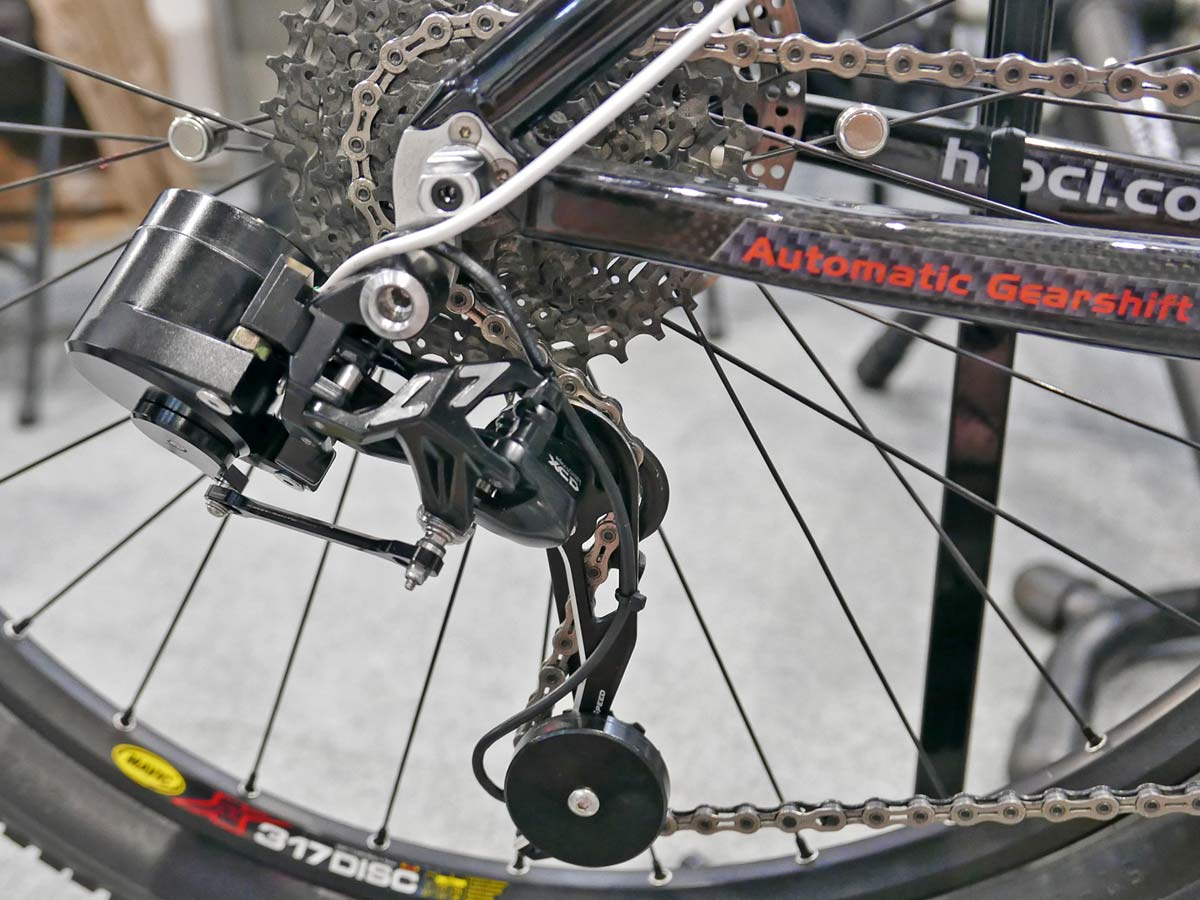 Now that there are many more electronic rear derailleur options on & coming to market –  think Shimano, SRAM, Campagnolo, FSA, even MicroShift – the idea of a premium fully automated shifting system seems ever more possible. HIPCI says this solution adds just 500g over the base derailleur, plus the external battery. That’s not bad if you figure in the weight savings of losing a shifter, housing & wire. As for pricing, nothing concrete yet. But they say that while the derailleur will likely cost more than most conventional mechanical rear derailleurs, it will literally be the only shifting component you will have to buy, making it cheaper than say a similar XT shift & derailleur setup.

Even though this derailleur is 11 speed, the HIPCI setup currently tops out at 9 speeds. But working with the same mechanics, there is no stopping them from adapting the system for a more modern 1x rear derailleur to bring it up to 12-speed (or more) compatibility, or adding an internal battery pack.

Maybe your next 1x mountain bike derailleur could be not only electronic, wireless, but also even shifter-less…

Well… Technically it is interesting but I don’t know if it is a good idea. It is impossible to anticipate something with that system. nd what if I want a slightly harder gear to ride out of the saddle ?

Look for a youthful Dave Guettler at about 4:19!

A day after April Fools, otherwise it would have had me

This will eventually be commonplace with one exception: you need to measure crank speed at the crank. Why? So you can TIME the shifts optimally. I do this manually, timing my shift so the chain moves during the off-phase in the power stroke, but automatic shifting will never be good without timing.

Why would fully automated shifting not be possible with the existing electronic systems? Honest question ,because I fail to see the ‘why’ here..

Current electronic systems lack the necessary sensors & CPU capacity/programming. The trick of course is adding at minimum speed & cadence sensors, plus maybe power & crank position sensors to better time the shifts, and enough processing power to figure out when are the optimal times to make those shifts.

There is no problem with CPU capacity nor with programming. It is just laziness of big companies to make it. The only thing needed for automatic shifting is crank arm position sensor.
I had Cyber Nexus with AUTOMATIC shifting but without crank position sensor. It was very interesting thing made y Shimano. If they only added crank arm sensor I would still use it:
https://lh3.googleusercontent.com/proxy/GrHH7zgE9n74HlLjj6qsxhmT3LEVWB5MBiUuZYLl5oKLcl-iJSr57YSl81T8DSyNI8VEl29g0icn5k6YzXTxAPtRr7CYPtsI2LJcgsPejA9BSRLOvn4rV8KLh34ixMOF2tisRCN3-YJQd-R7td0