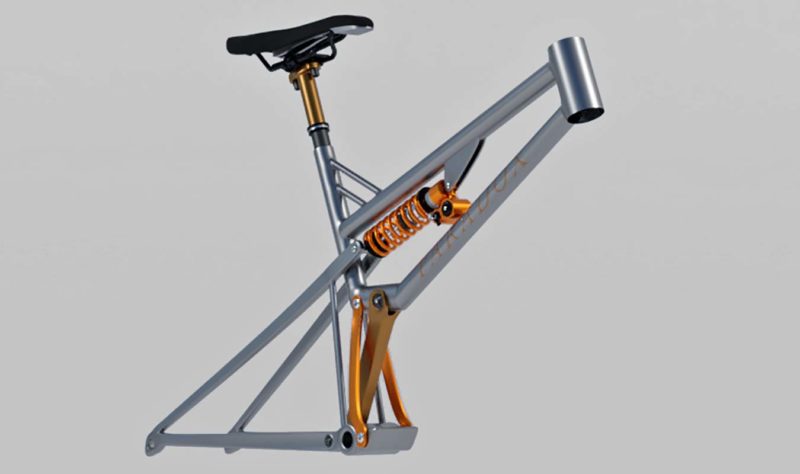 Over the weekend this prototype Paradox mountain bike concept popped up on Kickstarter with an all-new approach to classic 4-bar suspension. By effectively crossing two linkages in the middle of the frame with a unified rear triangle strapped to the back,  the Paradox Suspension concept promises an almost vertical rear axle path, zero drivetrain energy loss, and minimal bottom bracket movement under the rider.

The trick will be turning ideas into reality…

Let’s start off with what this really is – a crowdfunding project by a mountain biker and amateur inventor who has a pretty unique idea that he wants to develop further into a working prototype. Bryan McFarland, a Connecticut State Park worker by day & tinker by night, developed and applied for patent protection for a new suspension design concept (not a bike, per se) and is raising money to turn that idea into a real-world, ridable prototype mountain bike. 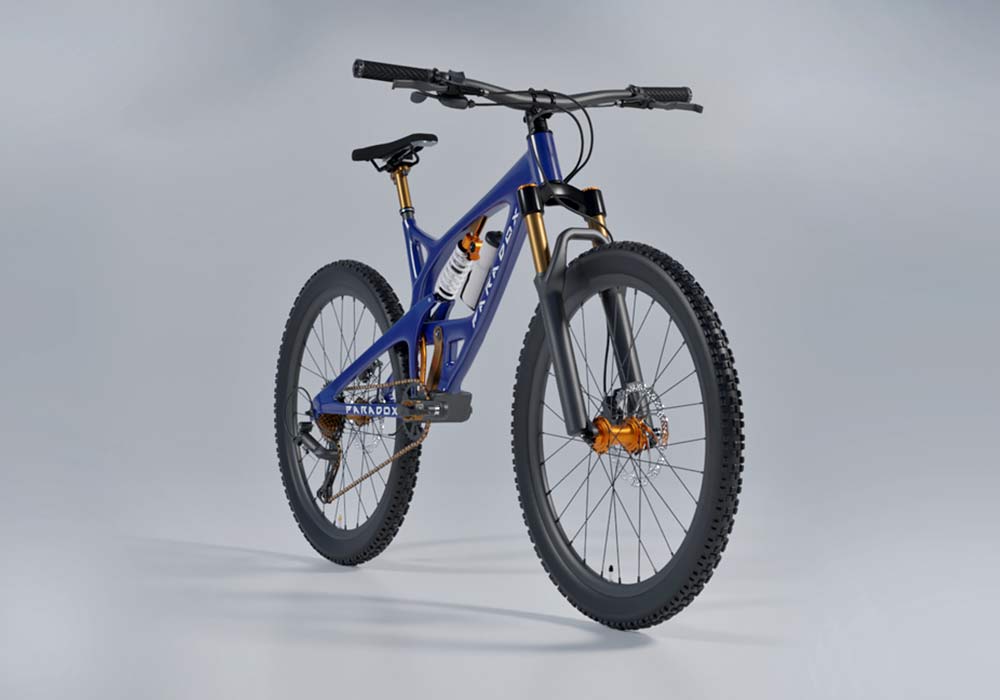 This is not a campaign that will end with you riding a new bike. In fact, the guy behind it makes it clear that he doesn’t want to give away trivial trinkets as rewards either. If you support the project, you’ll earn his heartfelt thanks, an e-book down the line detailing the project’s development if you want, or maybe a piece of his original artwork if you feel generous in your donations. 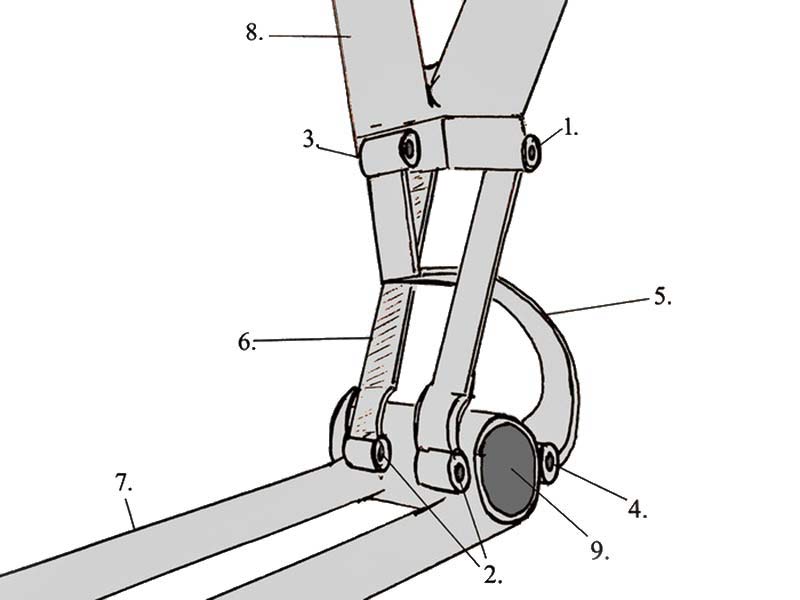 Various 4-bar suspension designs dominate the majority of modern full-suspension mountain bike bikes, probably for a couple of reasons. There are tons of ways to customize them to deliver efficient rear wheel movement with tunable suspension performance throughout their travel, manageable drivetrain efficiency, and controllable rider weight & braking impacts.

McFarland’s new design uniquely crosses those four bars with the bottom bracket in between the two lower pivots and the rear axle on the same bar, cantilevered out on a unified rear triangle that also drives the shock. 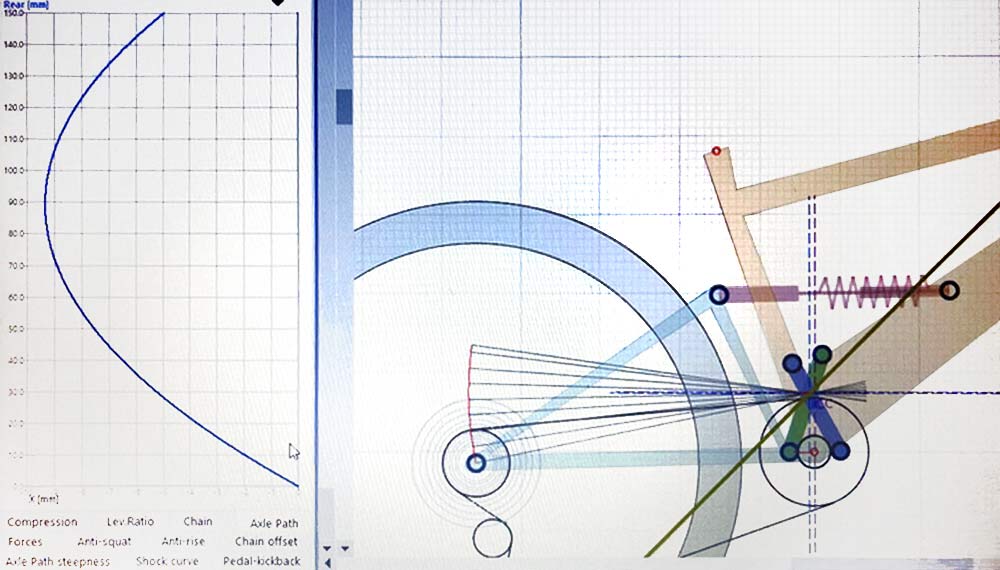 The result is a near-vertical arcing axle path to absorb rear wheel impacts. Bottom bracket movement is minimal, and restricted to a horizontal plane. Plus, there is also zero chain growth and no pedaling energy loss thanks to the URT. 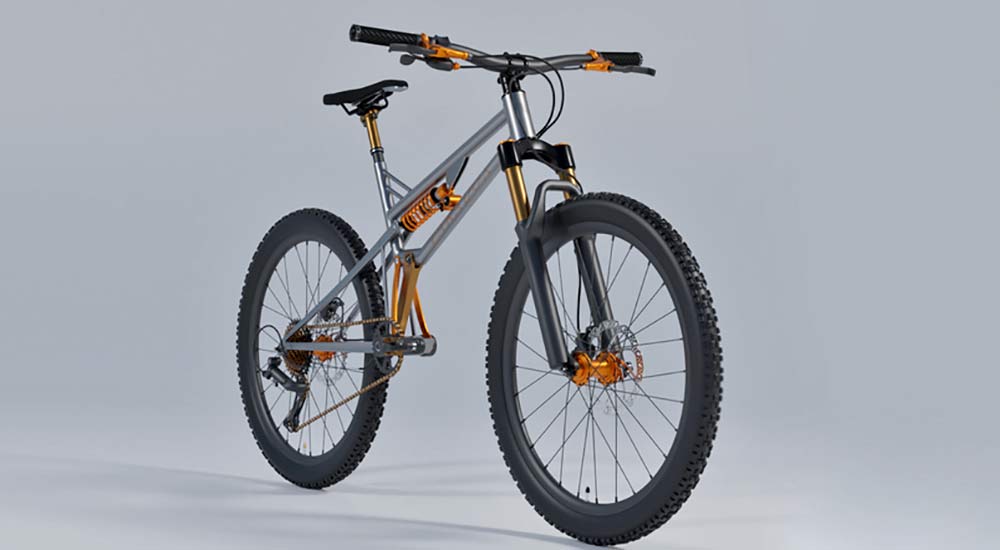 The downside is likely stiffness. The rear triangle URT would be stiff. But, the entire suspension relies on the two vertical linkages (red & blue, above) needing to rotate, curving one inside of the other, within the restricted space between the crankarms, chainring, and the rider’s legs. On top of that, the rear shock link is also an unsupported cantilever from the two lower pivots. 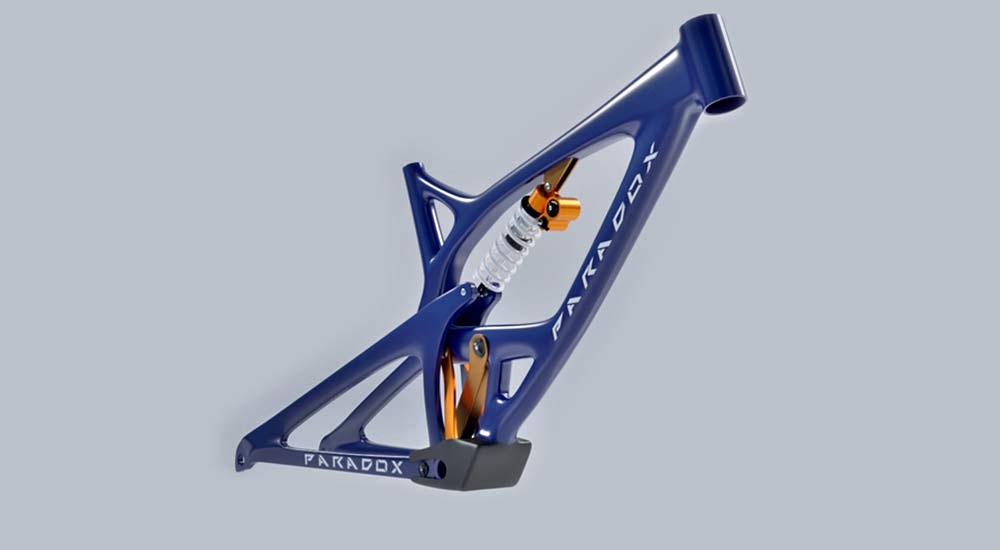 With all that said, McFarland has proposed an updated frame design concept with an extended down tube and a boxy protrusion at the bottom bracket that perhaps adds a slider channel to guide movement of the bottom bracket for additional stiffness.

In any case, this is really the point of the crowdfunding campaign – to raise funds to further design development, to build a test mule prototype to evaluate potential design optimization, and ultimately to build a working proof-of-concept prototype. 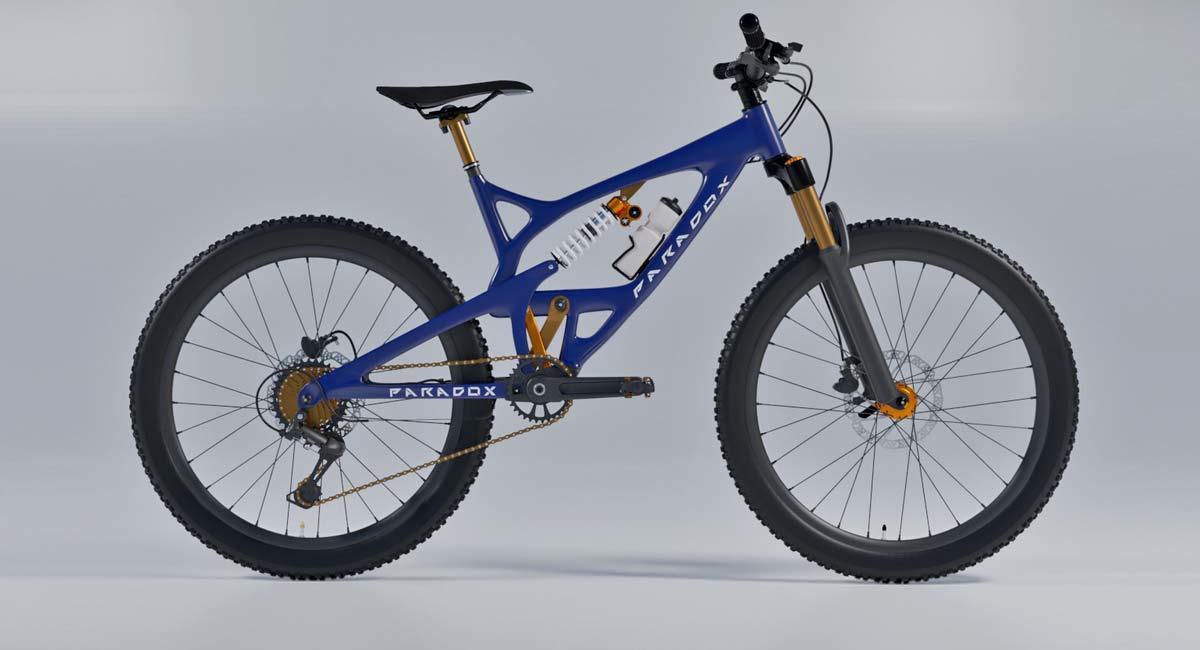 McFarland has the concept in place, and a provisional patent filed that protects the idea for 12 months to see how things pan out. He’s agreed with the mountain bike engineering specialists at Paul Hammerstrom Designs to make the concept into a buildable bike. And he’s lined up a local CT metal fabricator to build the test mule & working prototypes. All of that is on track to be completed in 2022. He just needs another $90k or so to make it happen.

Should you support the idea?

That’s harder to say. McFarland calls it a Paradox, “an apparently absurd proposition that when explained and tested proves to be well founded and true“. His goal now is to get the project to a point where he could either sell the idea to an established & interested mountain bike company to turn it into a bike you could buy, or see if it was worth establishing his own company. For now, it’s just an interesting idea that needs help getting off the ground.

Is it April Fool’s already? It would really help that guy to have a general understanding of sprung versus unsprung mass and how/why suspension actually works. Kinematics don’t tell the whole story…

Just looked through the kickstarter. So we wants funding to pay for everything including his time? Other than the initial idea, what work is he putting into the project since he is outsourcing the design to hammerstrom? Just seem like he wants free money to explore an idea that he doesn’t fully understand the actual engineering behind. And what do potential investors get in return? Kid’s refrigerator artwork? Solid pass.

A chain idler is actually a simpler design…

This is ridiculous. Someone please stop this guy before he wastes any more of his time. This design is flawed on so many levels. Holy heck. I saw the title of the article and assumed it was a joke but this is actually for real.

He also wants $10K to buy all of the build parts including multiple shocks to decide which one is best for the prototype. Wow.

I think a Go Fund Me would be more appropriate than a Kickstarter.

So how is this not GT I drive ?

I think he wend down into his parents basement, saw an old Slingshot and I-Drive and when hey…..:D

This is a Trek Y22. The GT idrive BB stays in a constant position.

man oh man, I always wanted a bike that changes it’s reach numbers as the suspension compresses! I can’t wait for that rear triangle to translate every bit of force from the trail into my knees

I think everyone here is being too cynical. It’s a insightful twist on the old UST & it’ll be interesting to see how terrible the kinks in the idea are and if they can be worked around.

That said, this is a gofundme, not a kickstarter. He’s not offering anything other than the chance to help him achieve his dream. It’d be cool if he pulled it off & something useable came out of it.

Please stop talking about axle path. Its an irrelevant result from proper engineering in the rest of the kinematic situation. Anyone who talks about what shape an axle path is, or that it has any relation to axle performance is a doofus. This person has absolutely no understanding what actual forces are at play in an accelerating wheeled object that create unwanted movement.

There are almost no positive comments here. Ok, the Kickstarter hate i get, but yo, i genuinely don’t understand what there is to disparage about this guy’s actual design!

Someone mentioned a shifting reach number, but how is an extra 40mm of reach an issue at full compression? Isn’t the dropper slammed for a big hit? Also, i don’t think ht angle would be affected.

Someone else mentioned sprung mass, but isn’t the bottom bracket only moving horizontally?

Please, somebody take the time to explain what’s so terrible about his linkage setup.

I won’t repeat all the reasons for lack of knowledge and logic in this project.
I am asking the guy to go and research the reasons URT & I Drive left behind. I can’t remember the name but mongoose had a shity flimsy design too.
Please make a list of all the negative feedback of the historic suspension types you have mentioned, this list on its own will put you of.
The idea you have presented has a lateral flexibility potential of a trampoline.

I have the Mongoose Canaan from 2012 and it looks eerily similar except with more linkages (is that even possible?). Looks like an Idrive from yesteryears…

Patents do not “protect” anything. Patents are evidence in a court case.

The matter claimed in an issued patent (not what this invention has, at least yet) is indeed protected. A patent owner has the right to exclude others from making, using, and selling what is described in a patent’s claims. Enforcement of those rights may come via negotiation and licensing, or via litigation.

Former Klein Mantra rider here. He’s right about it’s efficiency, wrong about bottom bracket travel. The bottom bracket does not travel that much, because the front fork moves too.