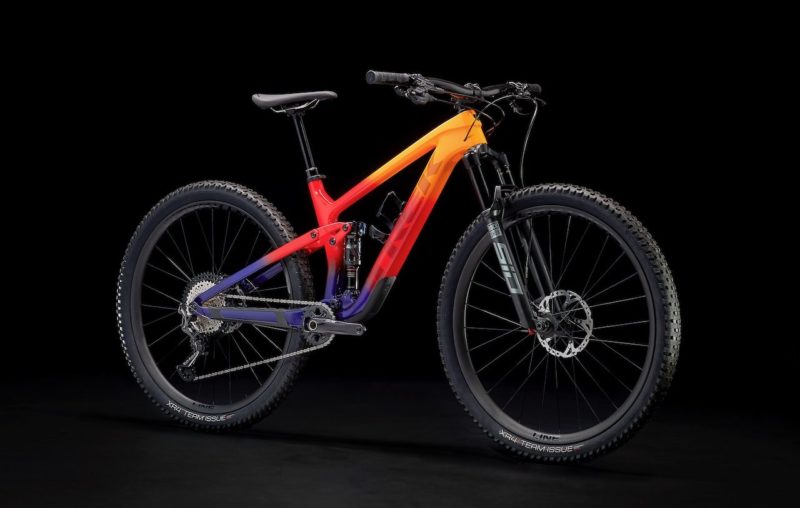 The engineers at Trek are refreshing another popular model in less than two years, the long-running Top Fuel. Yes, this mountain bike just recently received an overhaul, but the Trek team decided it could be even better and more fun… as a longer travel, more capable trail bike!

Trek introduced their Top Fuel all the way back in 2005. The bike was a first for the company, a full-suspension XC race bike mixing high-end alloy and carbon elements. As cross-country racing and mountain biking in general evolved, so has the Top Fuel. It gradually went from a full charging 26″ alloy/carbon mix to its later full carbon euro-centric race machine with an integrated seatmast. Then by 2012, it was seemingly retired from the Trek line, replaced by the Gary Fisher Superfly 100 to mixed reviews… 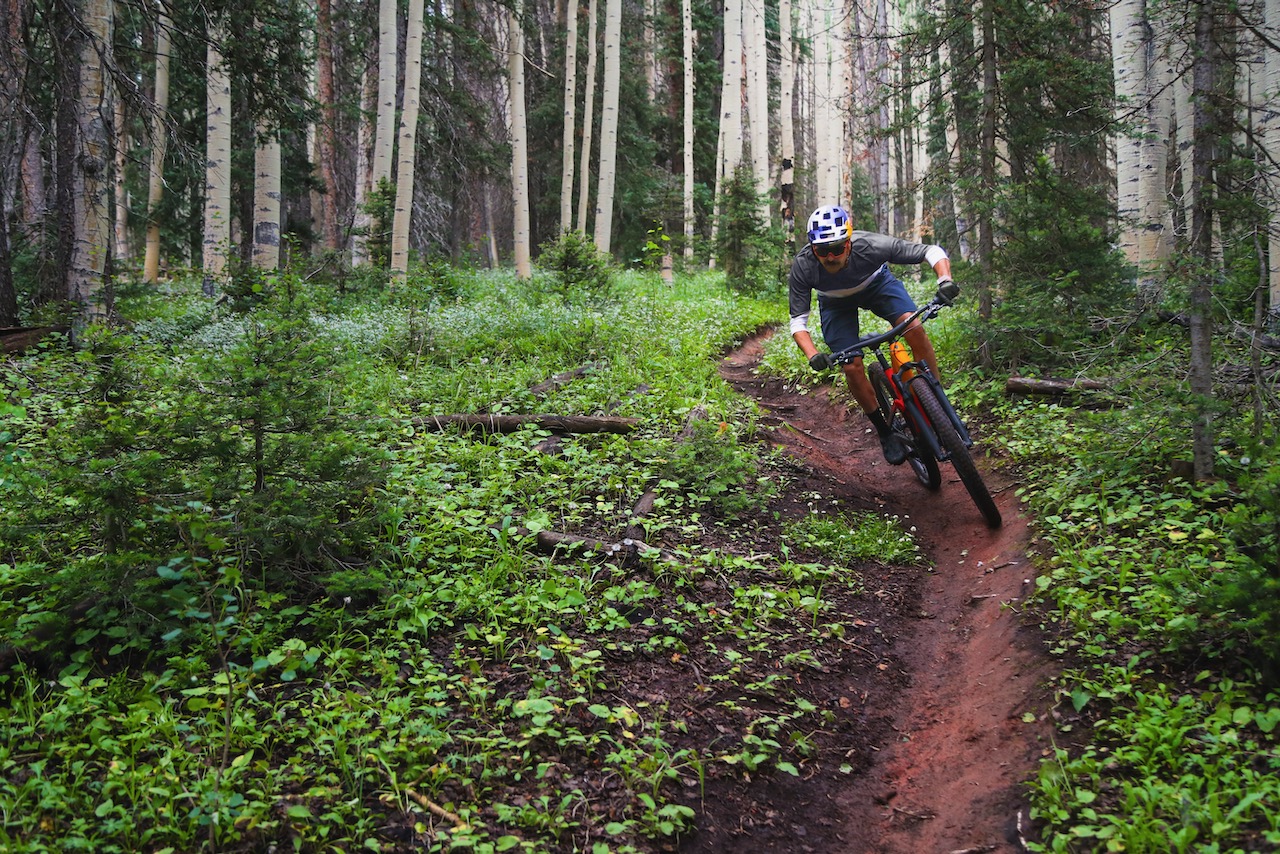 Then in 2015, the Top Fuel was reborn as a 29″ 100mm race bike again. The bike had all the trappings of a modern XC race machine, but still capable of tackling big roots and rocks. It wasn’t capable enough for the development team at Trek though, and in 2019 the Top Fuel was again reborn as a marathon/down country bike… more capable, more range, and more travel. 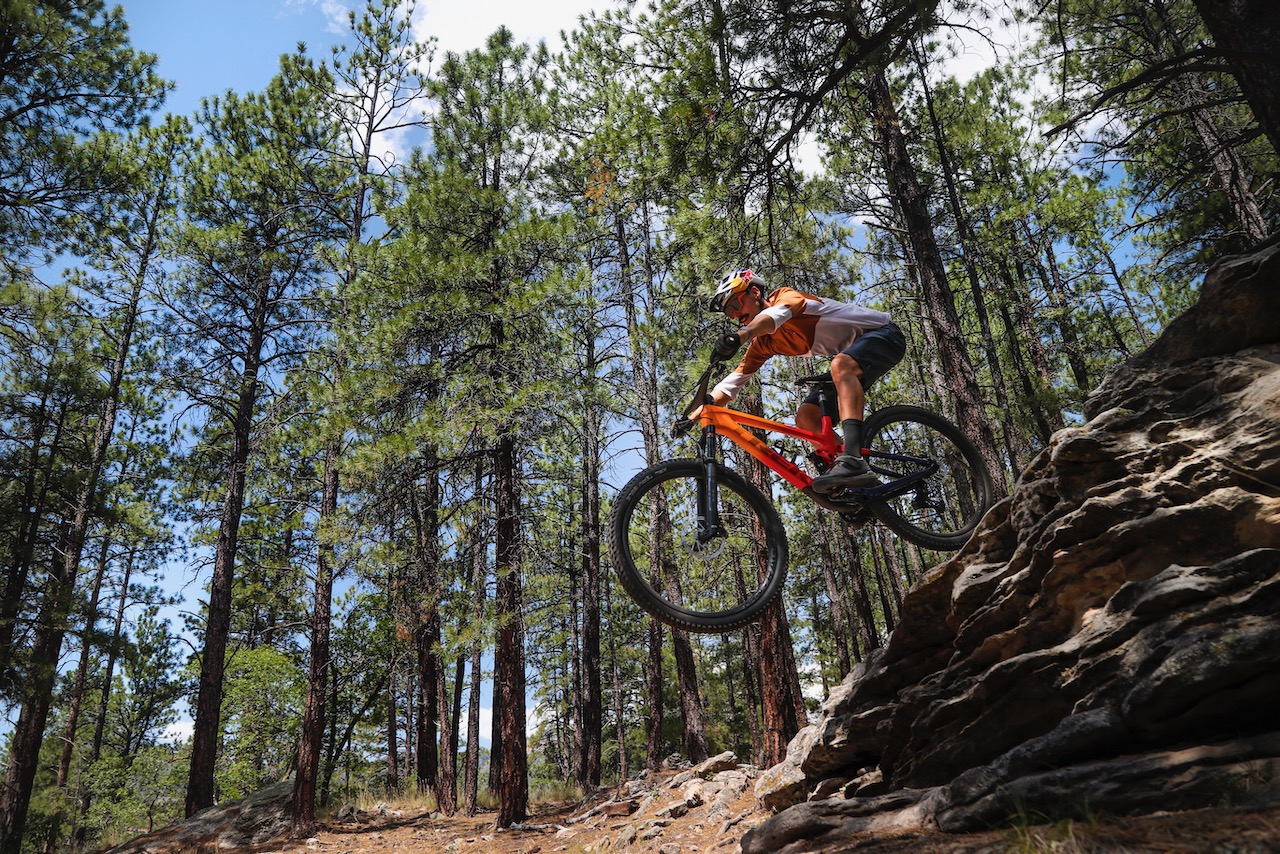 In its newest iteration, the 2022 Trek Top Fuel leans into the trail category even further, taking this once “race day only” ride to big drops and all-day comfort. 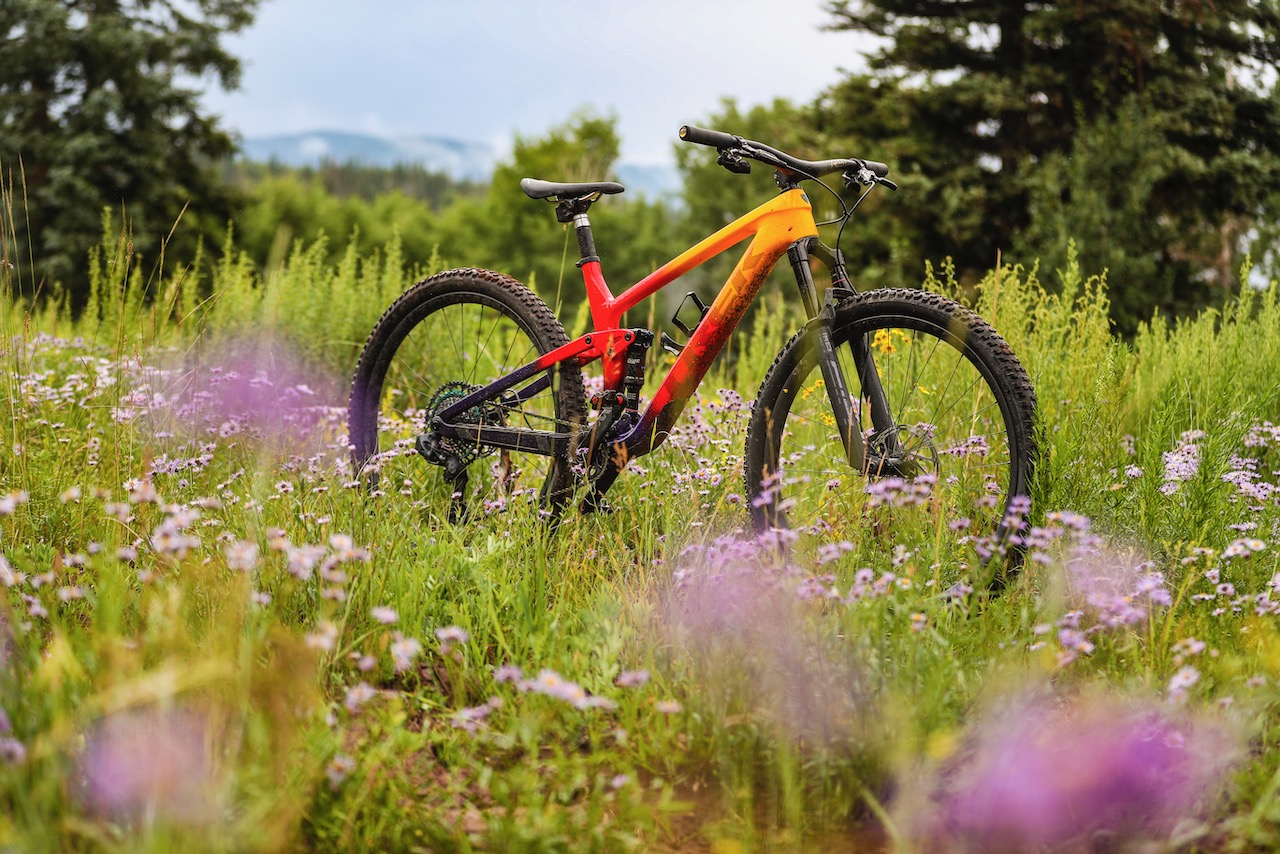 Taking about what’s new with the new trail bike, first off, let’s talk about the frame itself. For a two-year “freshen-up” Trek changed quite a lot on the Top Fuel.  The most obviously notable change for 2020 model users is a new shock orientation, moving from inverted placement, back to the “original” upright position for next season. The bike also receives an extra 5mm of travel for a more balanced 120mm front & 120mm rear travel, but there’s more… 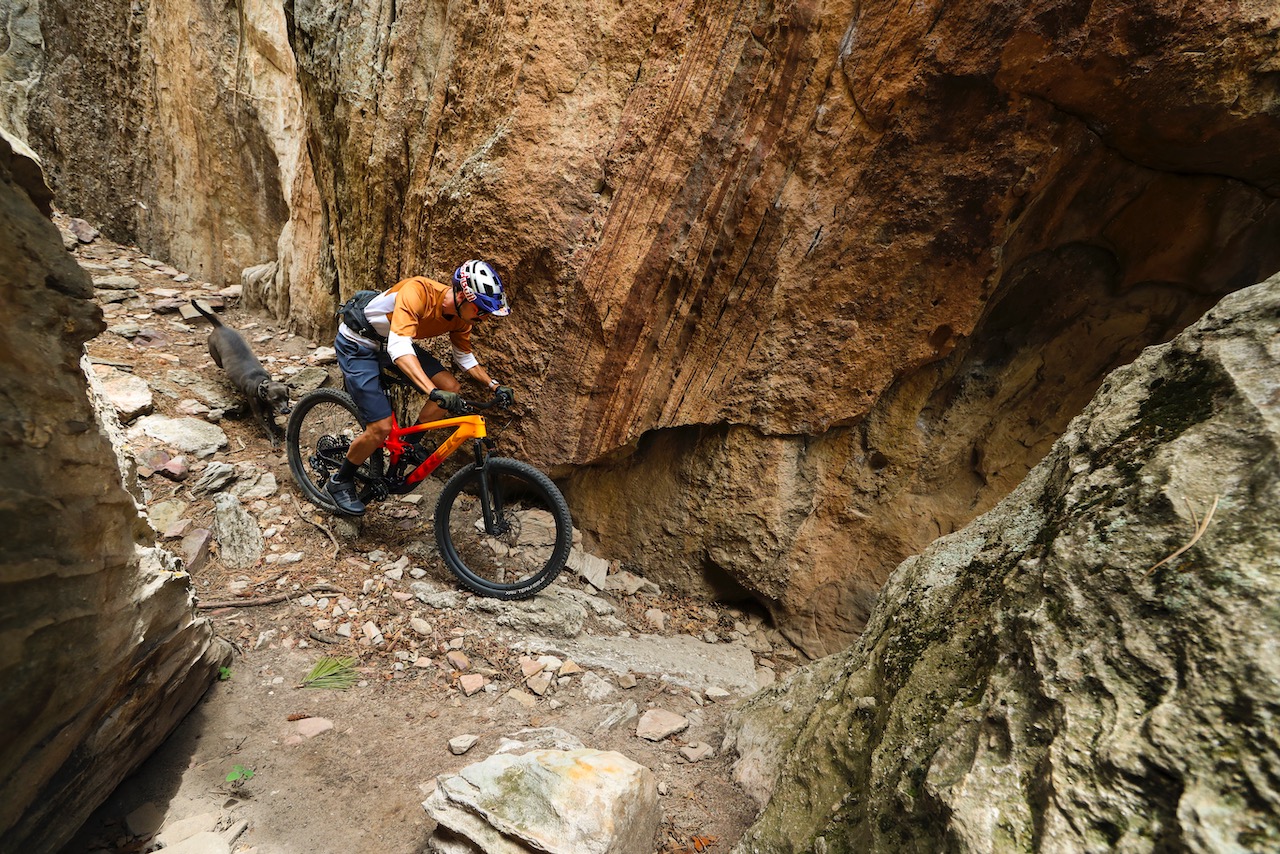 The committed move towards trail bike status brings with it a good tweak in geometry. The new head angle goes from a 67.6° to an even & slacker 66°, while the seat tube gets a bit steeper — migrating from 75° up to 76°.

The new bike also receives extended frame Reach (around 10mm depending on frame size), at the same time moving to shorter stems all-around for similar fits. 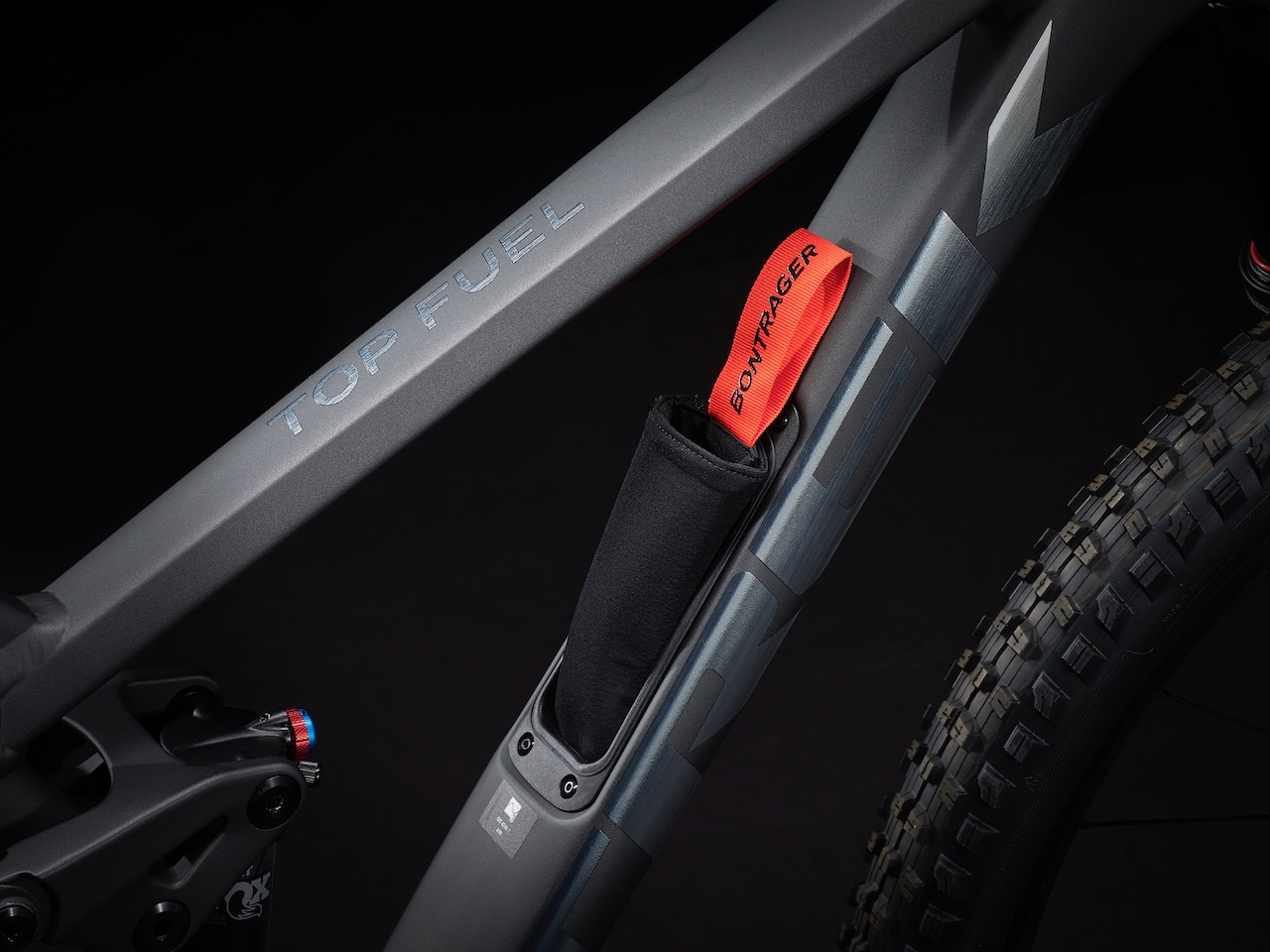 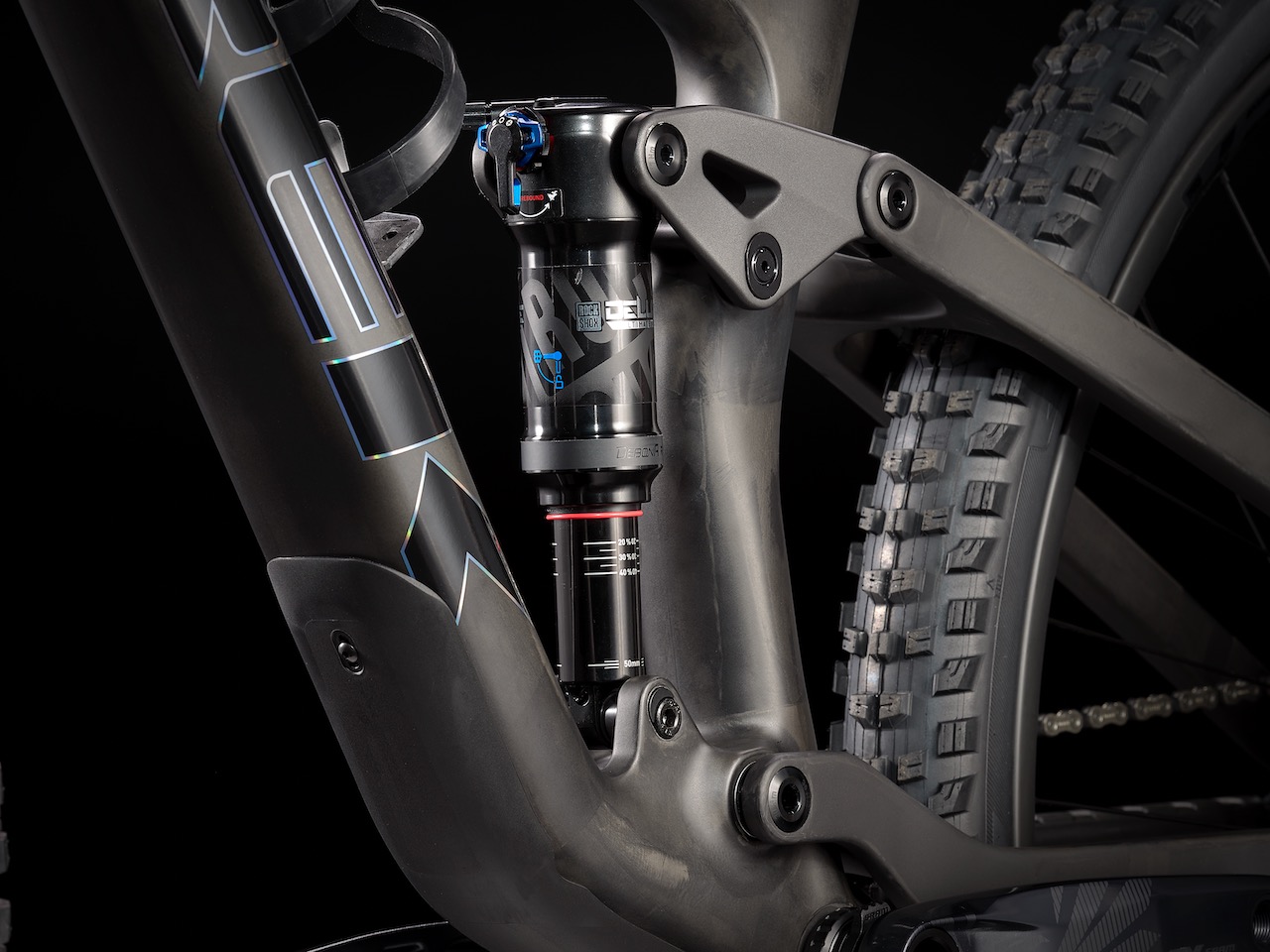 Beefing up the overall construction of the frame, Trek designers moved up to a big 34.9mm seatpost (up from 31.6), assumingly to accommodate more robust, resilient & longer travel dropper posts. Trek says the beefier seat tube stiffens up the frame as well, but that was not their first priority. 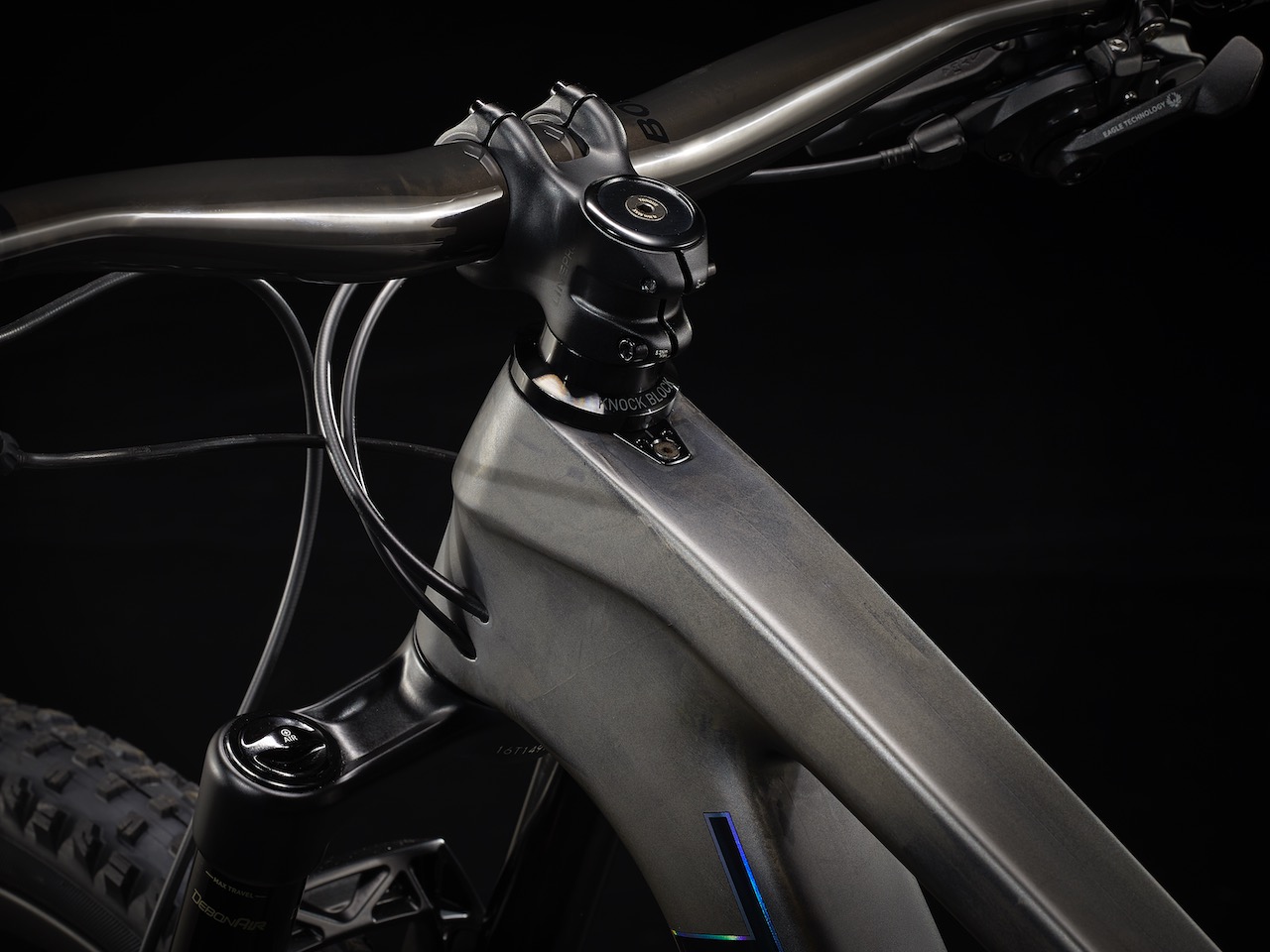 Those who were not super stoked on Trek’s “Control Freak” cable routing (quietly raises hand)… rejoice. The new 2022 Trek Top Fuel shifts to a fully-guided internal routing layout through the front triangle for an easy shift, brake, and dropper installation (with no rattling). 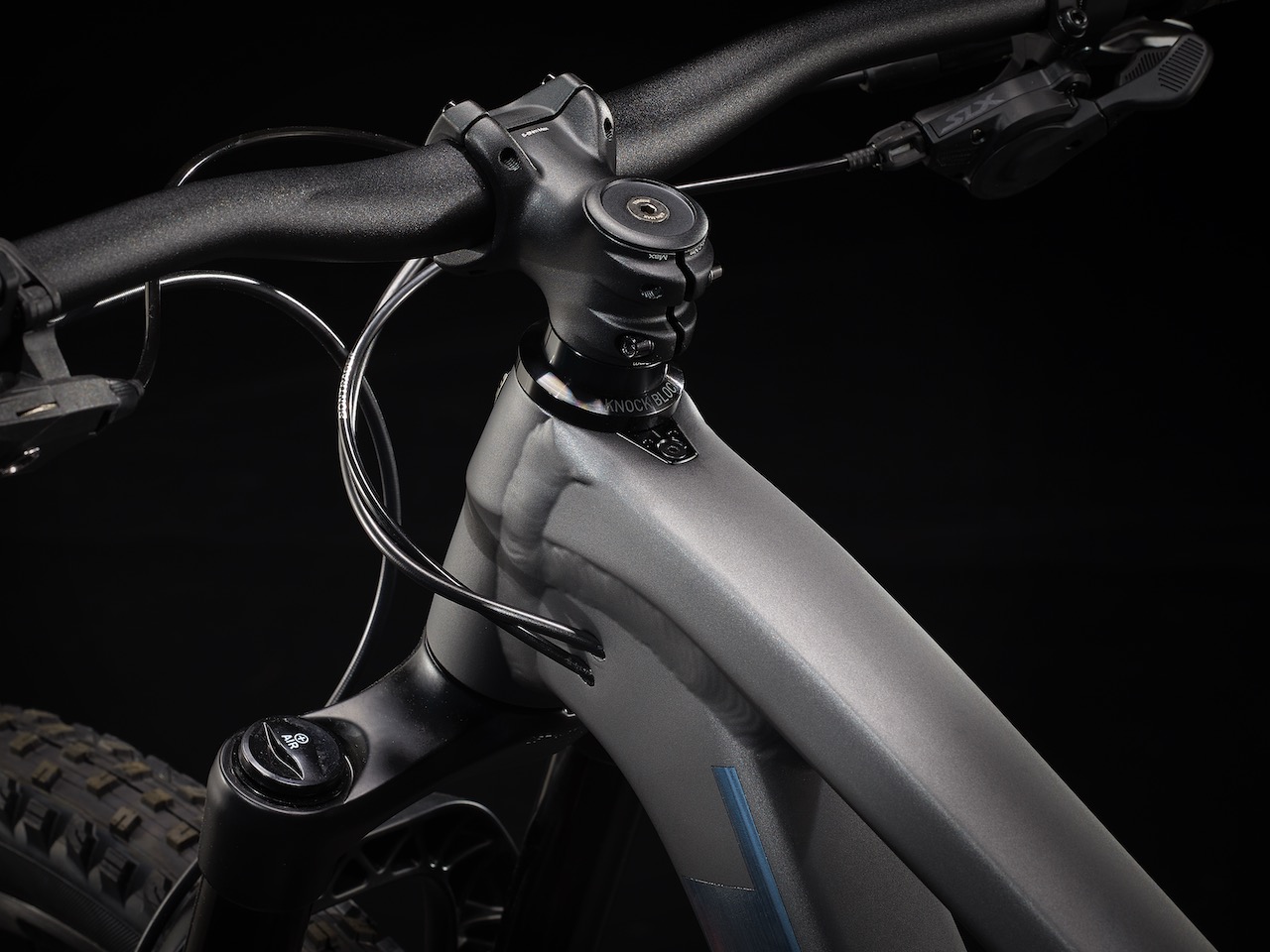 Trek also moves away from PressFit BB design for this updated Top Fuel — now going with a tried & trusted standard BSA threaded bottom bracket (unlike the move to T47 on their revamped road bikes.)

Another tweak is the KnockBlock, now in version 2.0. The new update allows for more free movement without “over-blocking”, providing for a free 72° of tail-whipping action OR the option to remove it altogether. 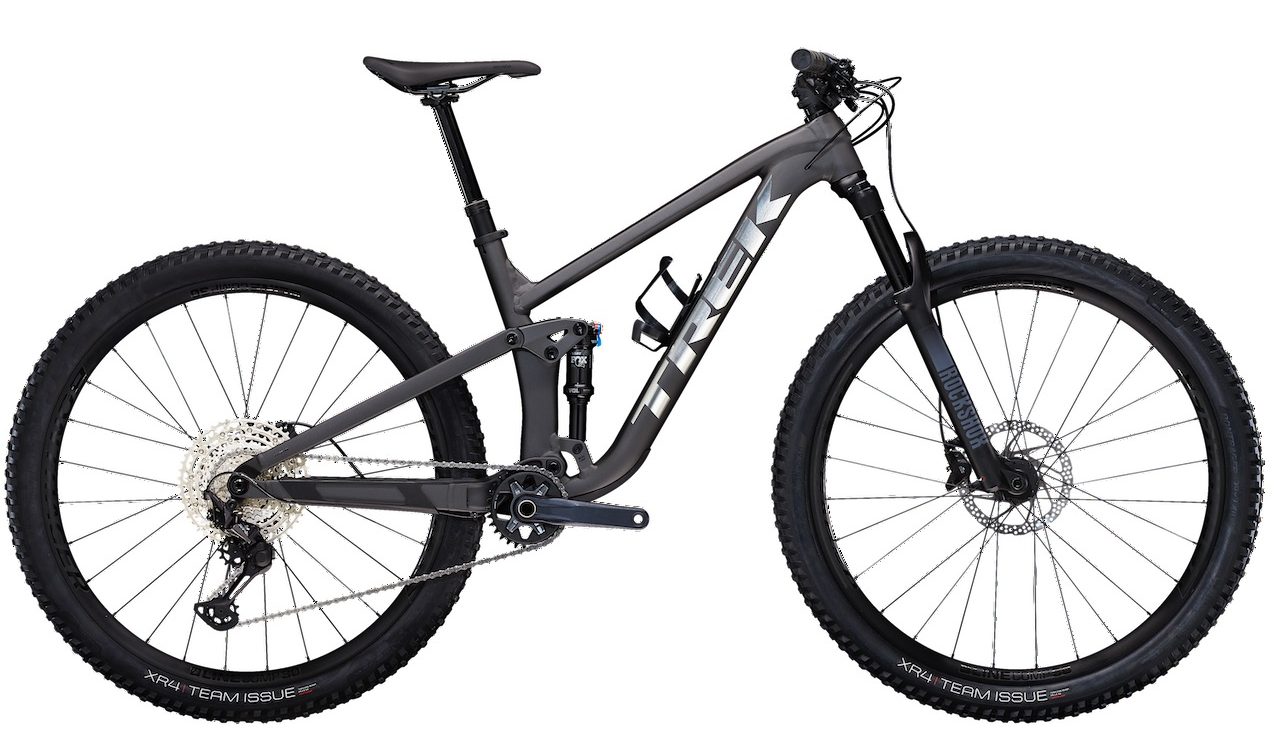 For those shorter riders that are looking to take advantage of the new design too, Trek has you covered.

The latest Top Fuel now also comes in a new XS size with proportionally scaled down 27.5″ wheels. But it’s only available in just one model for 2022, the new Top Fuel 9.7. 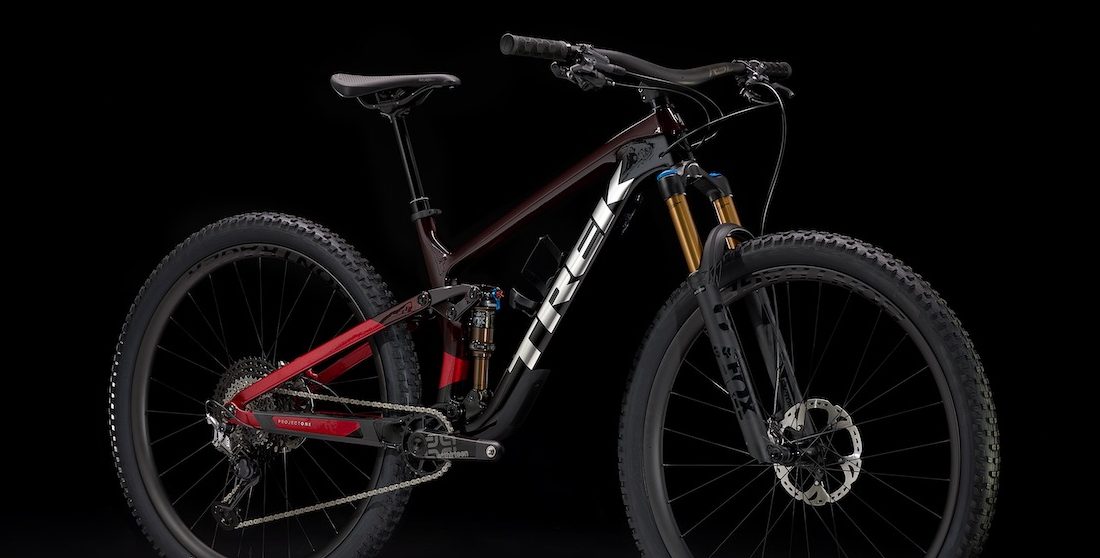 Trek went with a matching 120mm front & rear on the 2022 Top Fuel, but that’s not all in the suspension update department. The new bike’s anti-squat curve was tweaked to provide improved stability while pedaling. Trek still wants the Top Fuel to remain a fast category bike, and keeping the pedaling efficiency up and bob down is vital. 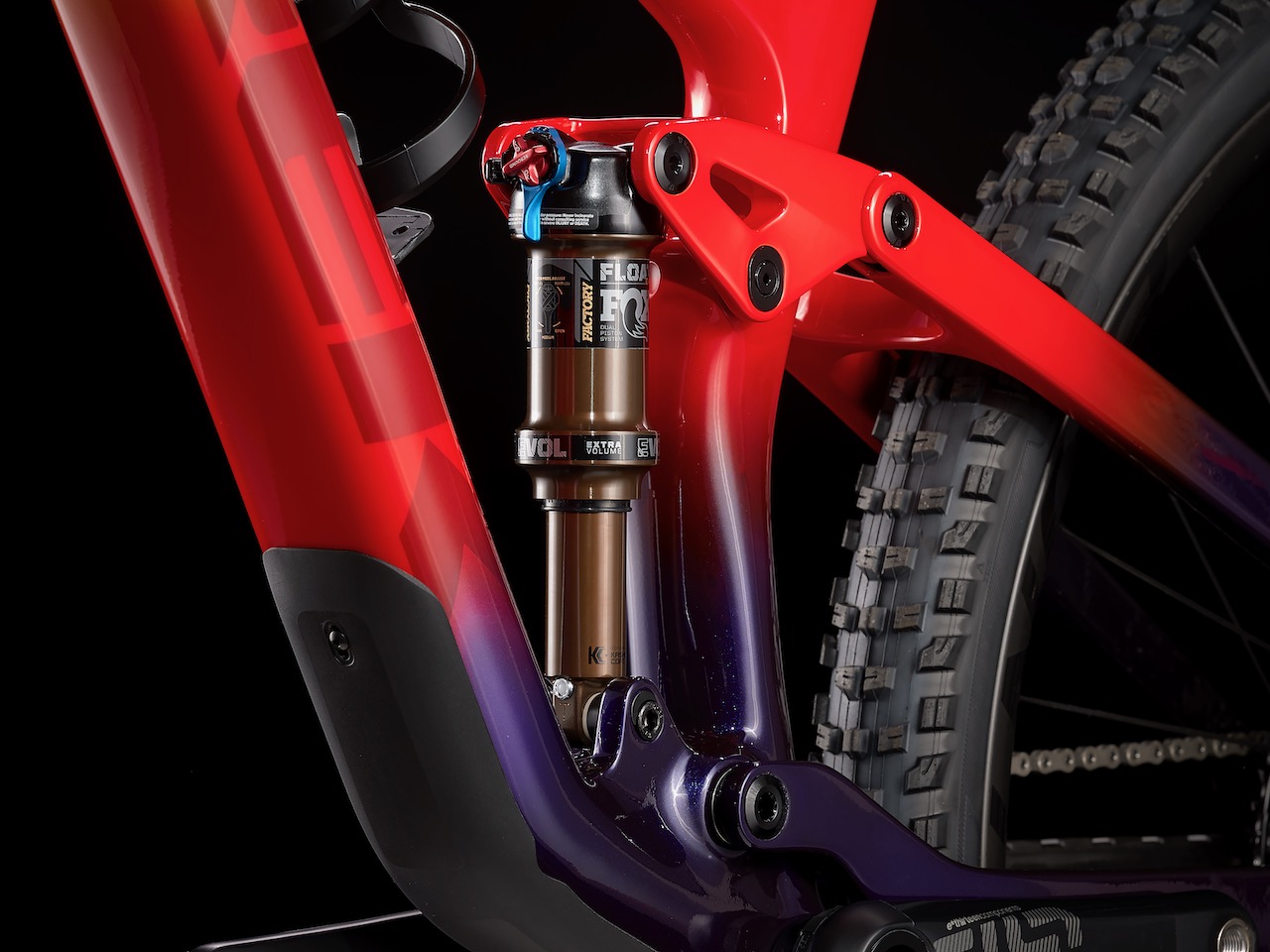 For 2022 the Trek Mino-Link flip chip gets a slight tweak, moving back down to the lower shock mount with the swap back to an upright shock layout (the previous model had the Mino up top). Having the Mino-Link at the bottom of the shock mount keeps it easier for position swapping. 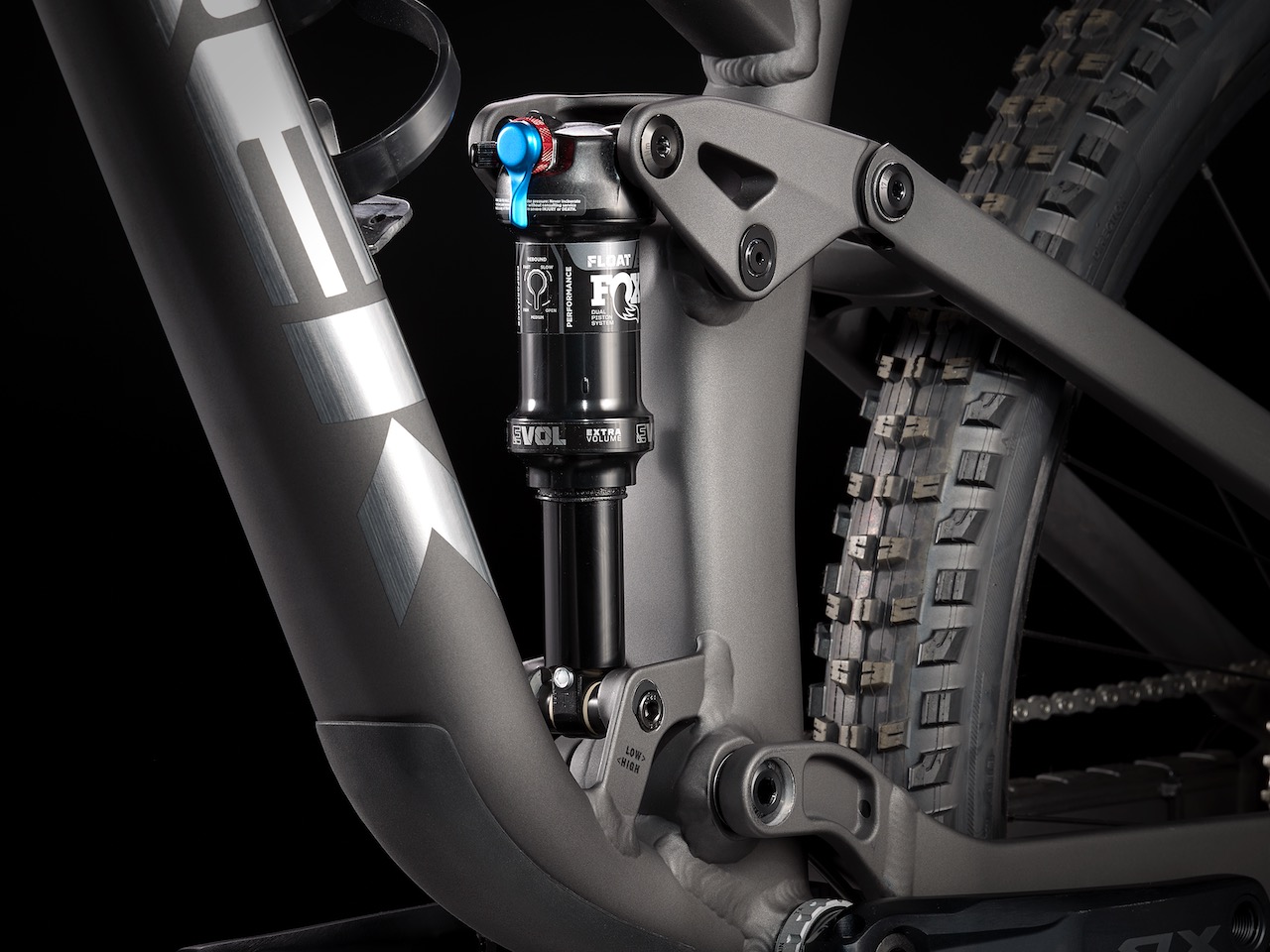 Flipping the Mino-Link from low to high will steepen the seat & head tube angles by half a degree and raise the bottom bracket by roughly 7mm – allowing the user to dial in the bike for a tighter feeling ride for more classic XC-oriented riding.

For the 2022 model, the Mino-Link area is more robust in either carbon or alloy frames, the same with the entire bottom bracket junction. 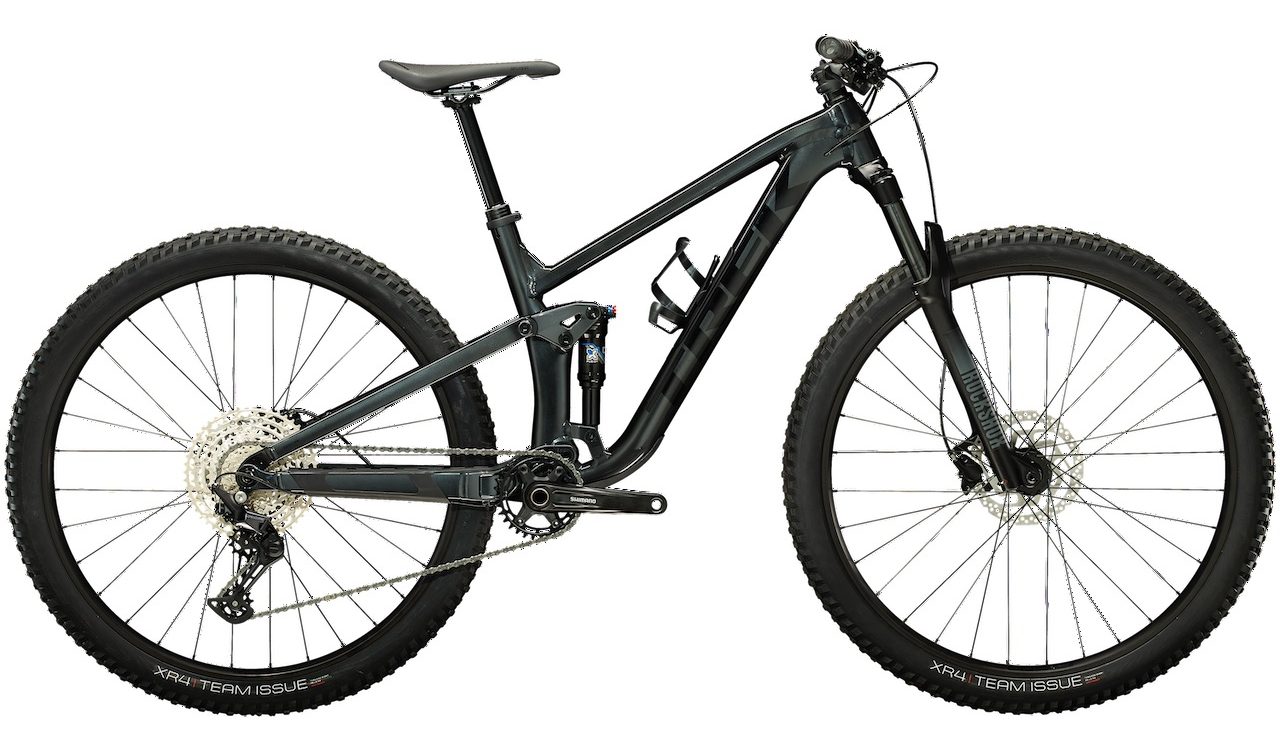 For those looking to get even more rowdy on the Top Fuel, the bike will accept a 130mm fork. And while they don’t spec complete bikes with longer forks, it seems like Trek is encouraging the audience to try it out.

What will that do to the ride? Trek says it moves the seat and headtube back by another half a degree, raising the bottom bracket by 3mm. It’s not a drastic change but enough for some extra confidence and less expensive than another bike. Or combined with the Mino flip-chip, it could give you more travel up front with almost no change in handling from the baseline. 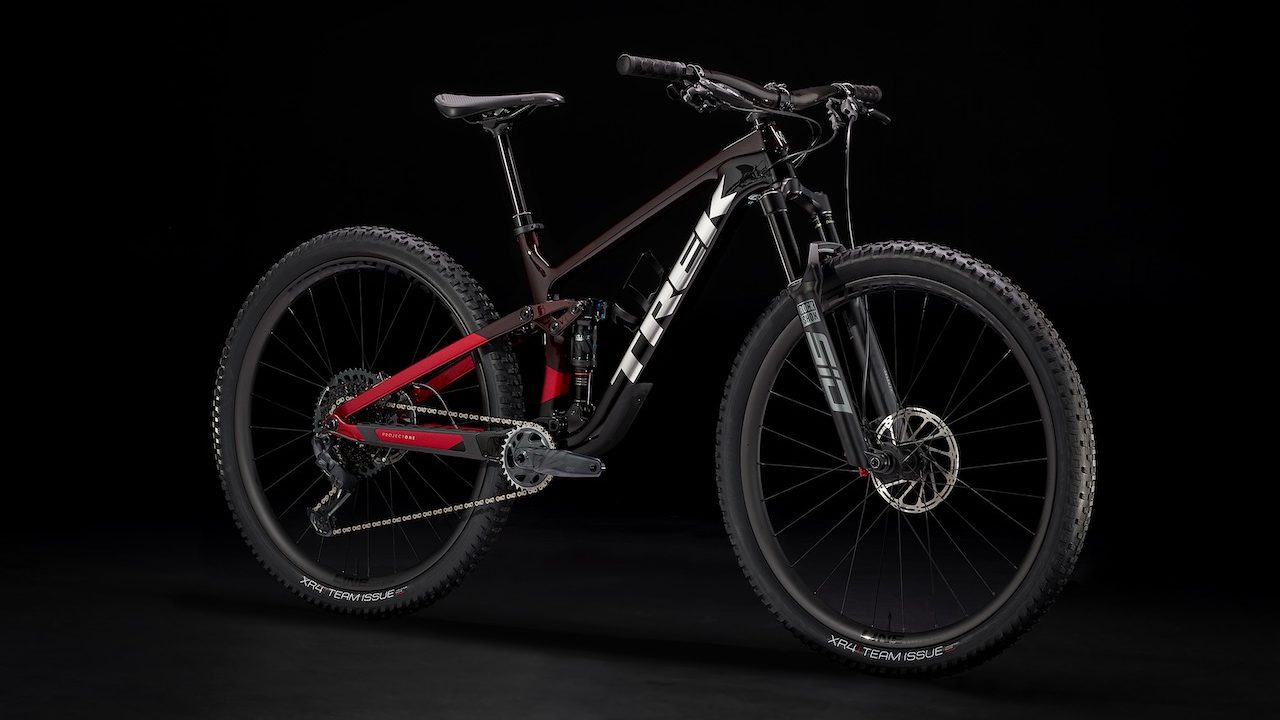 The Top Fuel will be available in full-on race builds in the 9.9 models featuring Shimano XTR or SRAM XX1 AXS components — racer’s choice. 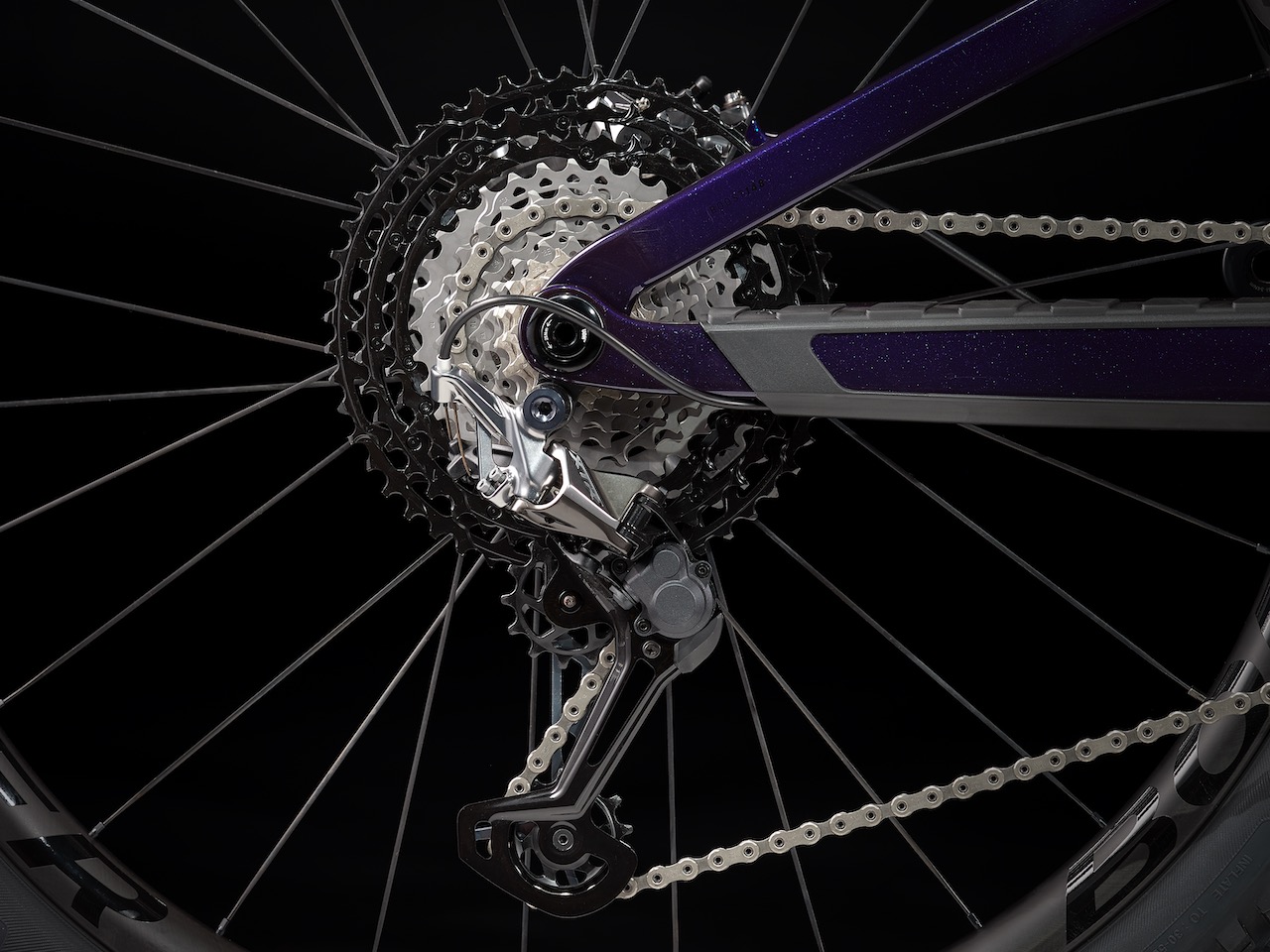 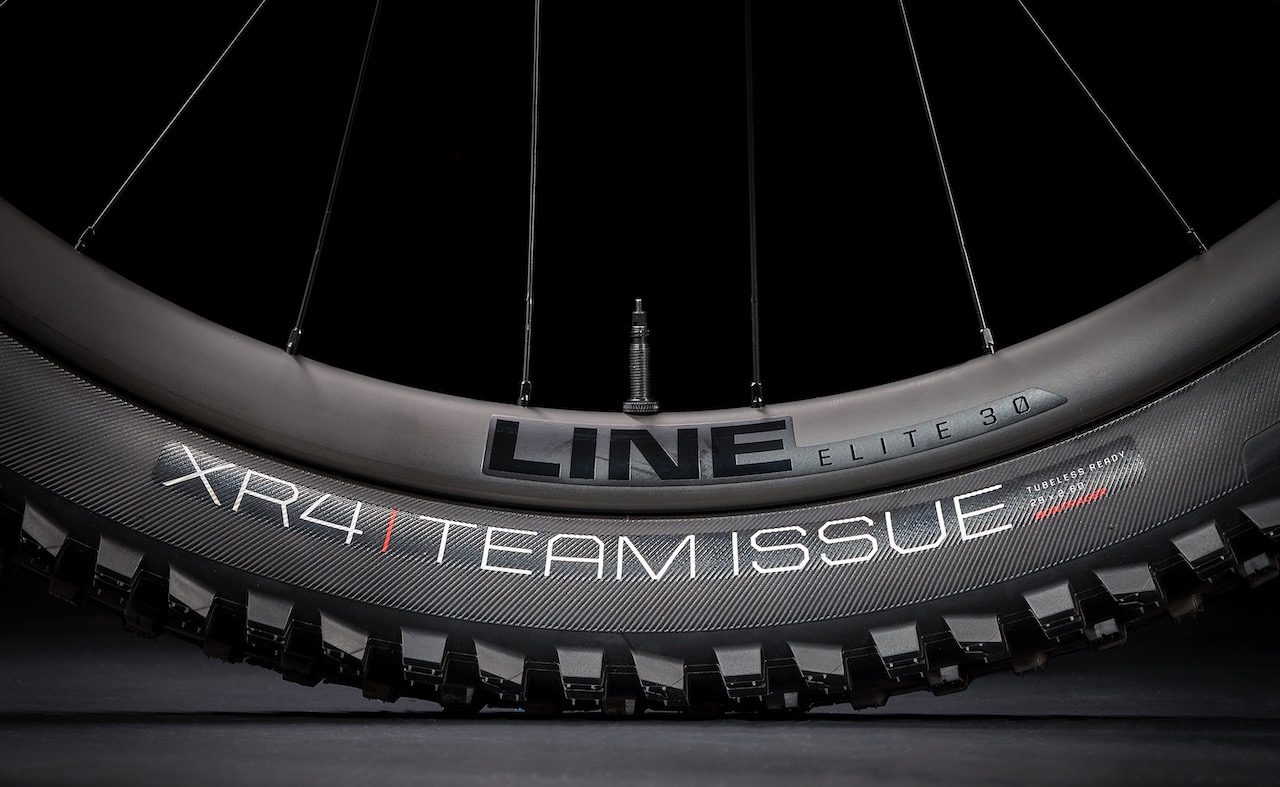 Trek’s carbon Top Fuel 9.8 builds are a solid mix of Shimano XT, SRAM GX AXS or GX mechanical — with SRAM builds paired to RockShox and Shimano with FOX suspension. The Top Fuel 9.8 has long been the workhouse race build and for 2022, Trek keeps a similar spec from previous years.

Each separate build has its own distinct personality, some are more performance/speed-oriented, and some more playful and fun — one thing is certain, Trek took their time making sure to balance them out with the right gear. 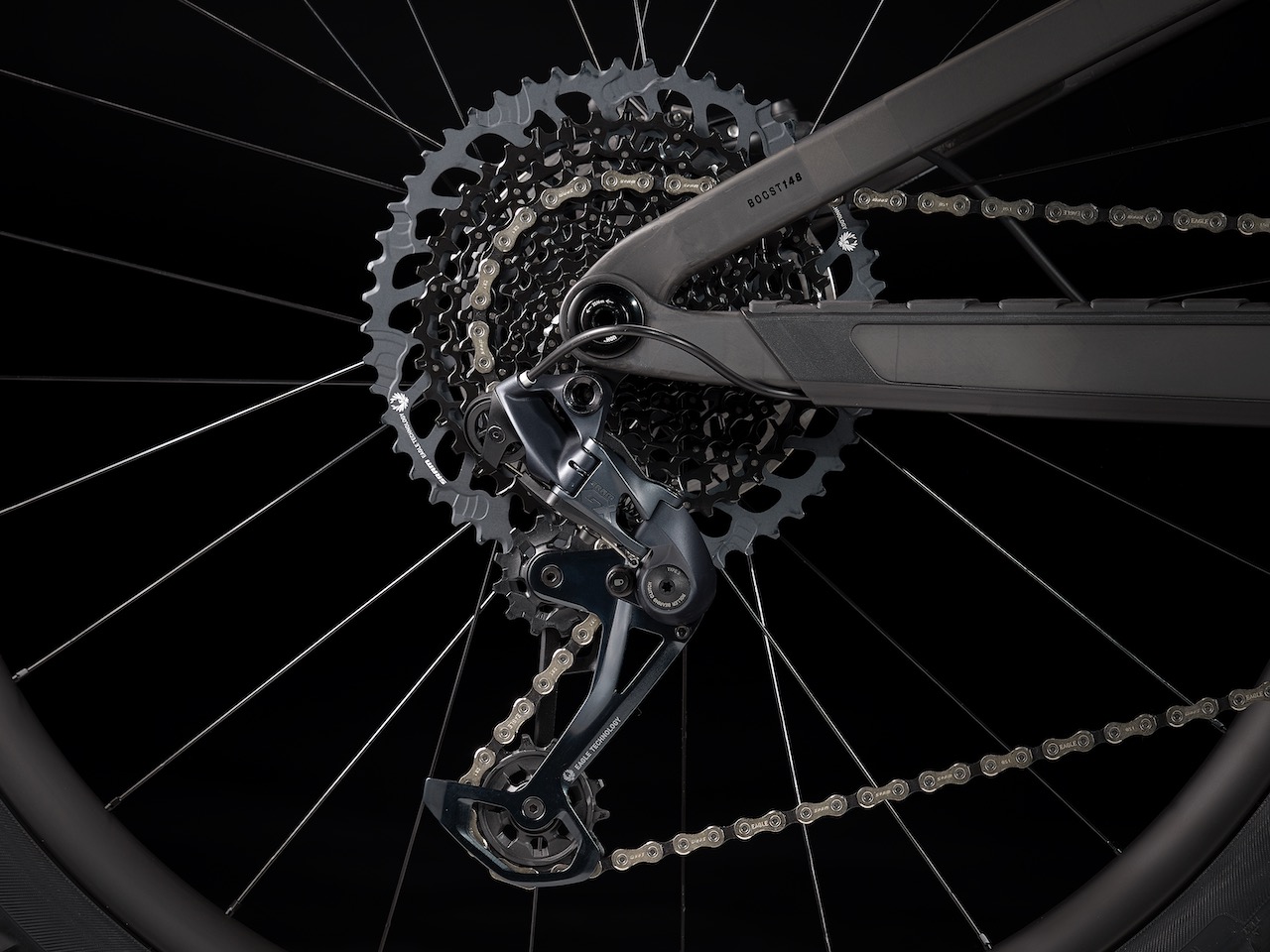 The Top Fuel 9.7 is the entry into the carbon Top Fuel frameset and features much of the same careful component assortments we’ve noticed from Trek this year — lots of value packed into the mid-range builds. The 9.7 lines come with a mix of Shimano Deore/SLX, Bontrager Line 30 Comp wheels, and a conventional alloy cockpit. 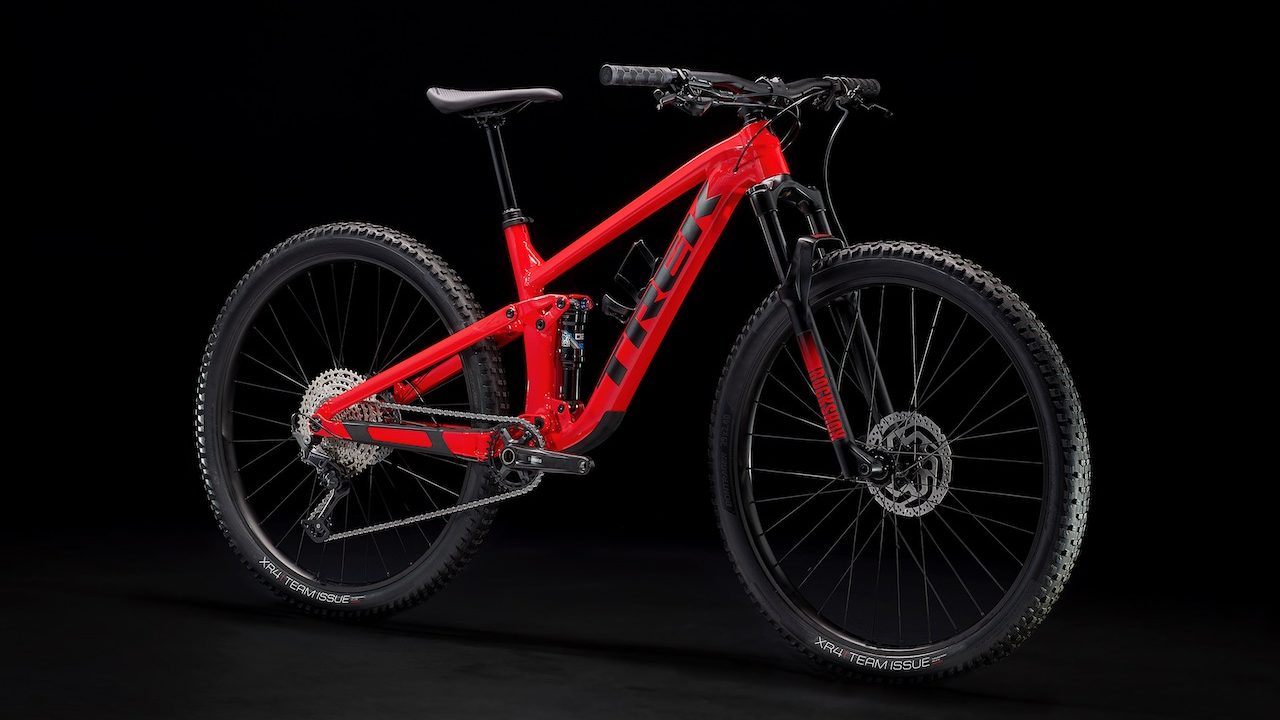 Moving into alloy models, Trek offers some excellent options for getting the most bang for the buck in your bike purchase. The alloy frame line includes: 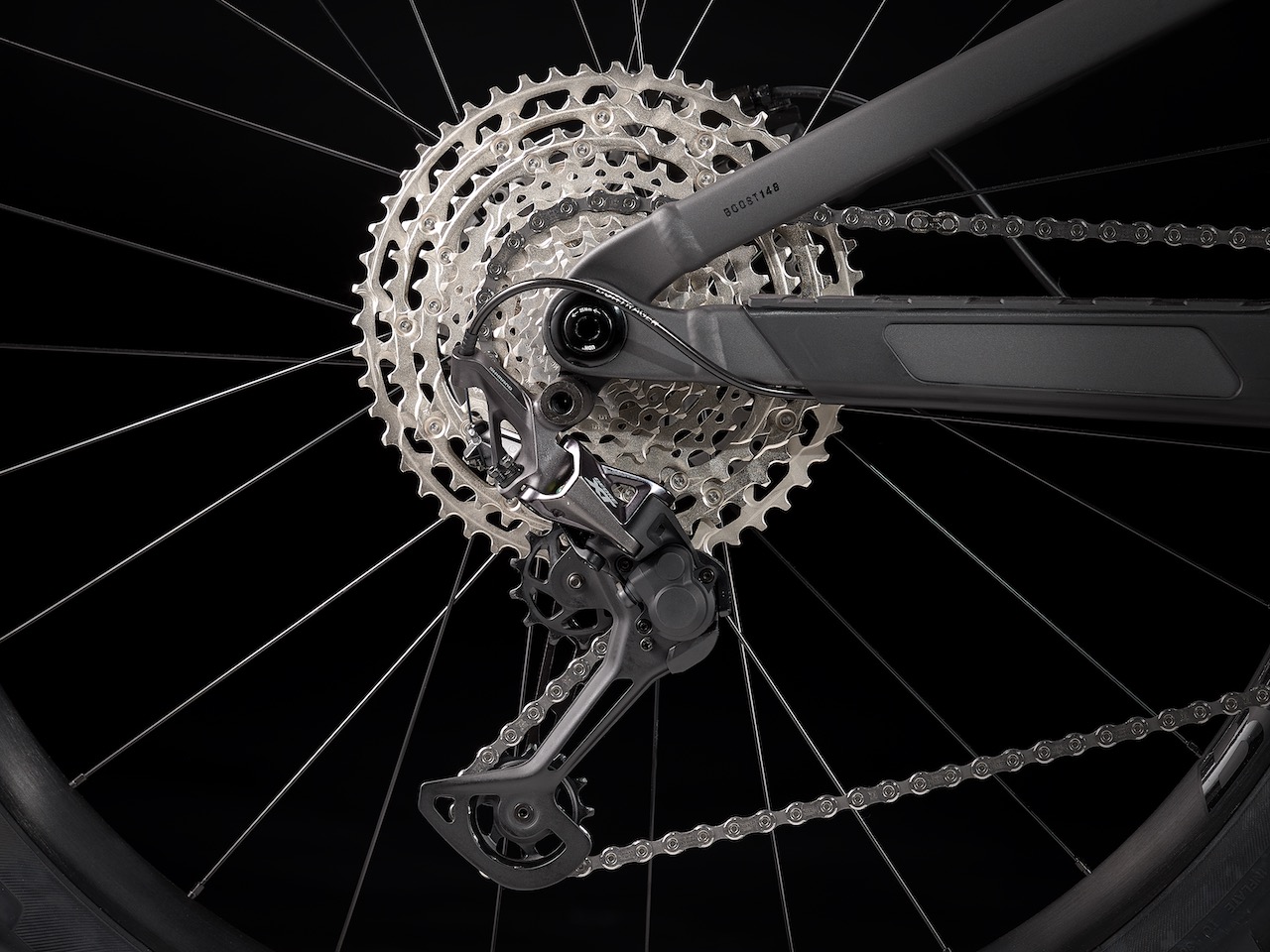 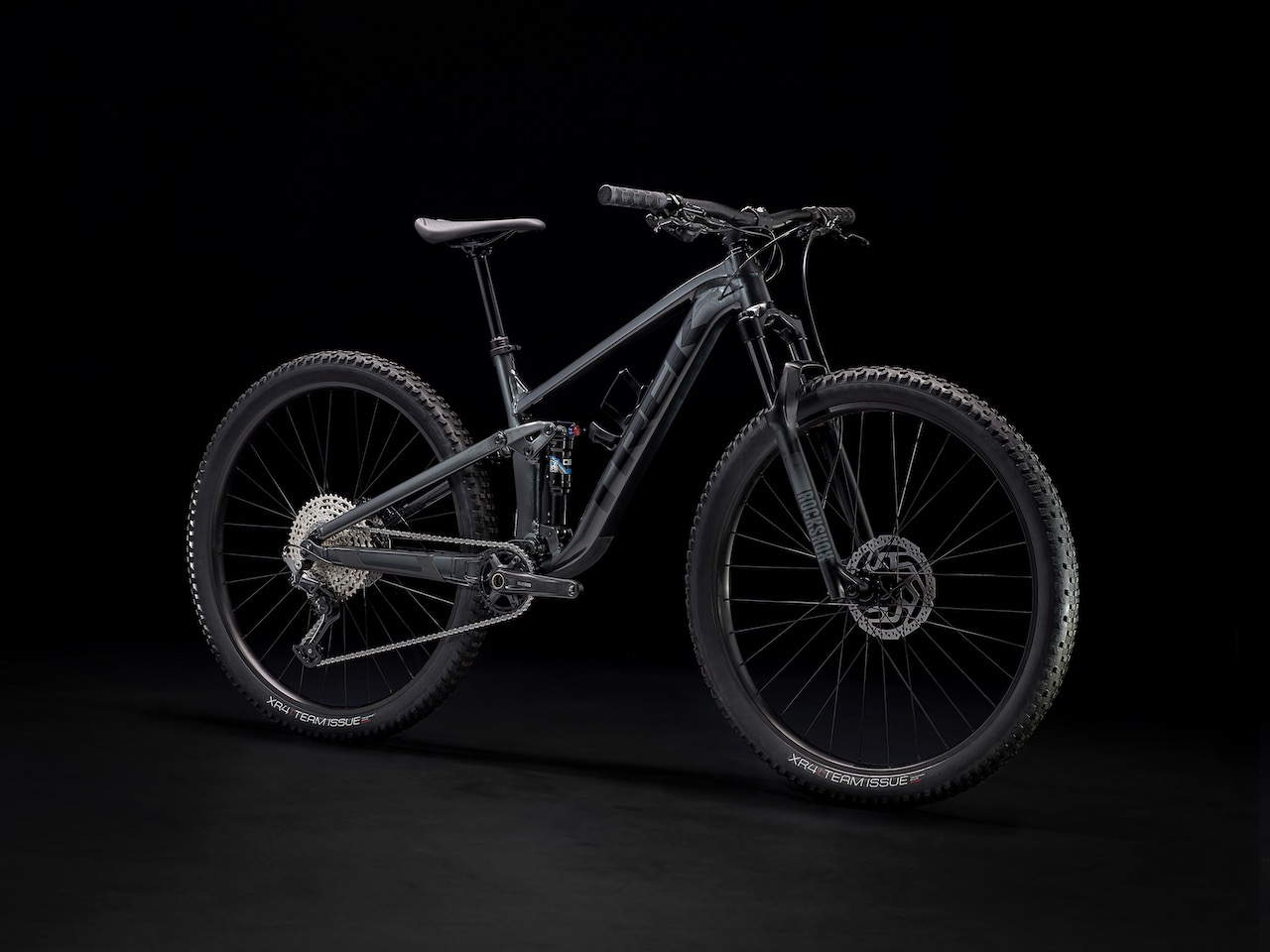 The 2022 Trek Top Fuel is available now at Trek retailers and online from Trek Bikes. We did some checking around at our local Trek shops, and they are indeed in stock and ready to roll.