If your idea of a touring bike involves less gravel and more panniers, take a look at the new Trek 520. Continuing the 520’s streak as the longest running model in Trek’s history, the 520 has been around in the line up since 1983. And while it still retains the original’s touring focus, the new bike has a few key upgrades to make it better than ever. In order to make it more comfortable and better handling, the frame and fork include a number of improvements. While the frame is still custom butted chromoly steel, the frame now has a larger diameter down tube for increased stiffness when fully loaded. The fork on the other hand has changed from steel to aluminum and includes Trek’s new ThruSkew captured quick release system. Trek describes it as a combination between a thru axle and quick release with the ability to remove the front wheel without having to remove the front cargo. It’s also 318g lighter than the previous steel fork.

The geometry has changed as well with a taller head tube that allows for a more upright position, a lower bottom bracket for better stability, and a longer wheelbase. Built around 700c x 38mm tires, the frame and fork do have the capability of running up to 29 x 2.0″ tires if you want to get into more aggressive terrain. If not, there’s always the ability to run full coverage fenders around the stock tires. Since this is a touring bike, the 520 comes equipped with full front and rear heavy duty racks capable of carrying 33lbs up front and 50lbs in the rear. Along with the three water bottle cage mounts, you should have plenty of gear carrying abilities. Between the gear and the rider, the bike carries a 300lb weight limit. The complete bike is said to weigh about 13.3kg. The 520 also makes the jump from bar end to STI shifting with a Shimano Sora 3×9 wide range drivetrain. In order to handle the loads, the wheels are 36 spoke and tubeless ready – though to run tubeless, you’ll need to supply the rim strips, valves, sealant, and tubeless tires.

Available in red or grey, the complete bikes will be offered for $1,574.99 while a frameset will also be available for $639.99. Check out Trek’s website for more including the geometry numbers.

The aluminum fork sounds awful. Why the departure from a steel fork ?

Then why not carbon?

@Seraph: A carbon fork would *not* be a good choice for a loaded touring bike with front panniers.

I’m sure carbon could be engineered to work just fine, but once you add the in-mold mounts and all the strength necessary for touring use, I wonder if it would wind up being that much lighter? It’d certainly be a lot more expensive.

This doesn’t exactly seem like the kinda bike you’re counting grams on.

That’s a lot of versatile, capable bike for not a lot of money. Nice.

Agree. At least put it on the frameset if cost is a driver and charge more.

300lb (136kg) max load: does that include the bike? If so, this is a deal breaker for a (expedition) touring bike. If the racks are aluminium, you probably want to replace them with steel ones.
For the rest it ticks many boxes.

Weight limit does not include the bike weight.

It is about the rider and cargo for this bike.

No, all trek weight limits include the bike as well as rider and cargo.
I’m not sure why its really its really rated the way it is though. Brakes? Trek’s lightest emonda slr carries the same weight limit, as do most of their bikes.

And I’m not sure the 520 was ever a “expedition class” tourer.

My late ‘80s Trek 520 had ~30000 miles on it when I finally retired it. Loaded touring, all around commuter, rain or shine. It was every bit an “expedition class” tourer for its time.

I just view “expedition class” as something built specifically for extremely long, self supported tours in areas of the world with poor or no roads…i.e. 26″ mtb wheels, possibly knobbies.
520 always just seems like a great “normal” long distance road tourer/everything bike.

Again, from the Trek FAQ, “Recommended rider/gear weight limit of 300 lbs.” That makes me think that it does not include the bike, but you should probably double check with Trek to be sure.

Totally agree with you, the only fork I ever cracked was alloy. Due to flex alloy forks go through under braking and vibration the alloy tends to work harden then crack. Steel doesn’t fatigue the same. Carbon forks don’t really fatigue at all. And I know some people will have a different take on this but that my experience – not theory.

All of that comes down to engineering and use case. I’ve only ever seen carbon forks break, though I ride them on all of my road bikes, because I trust where they came from.

38c tires on deep dish rims while loaded down does not sound like too much fun to me. Every other bike segment has proven the benefits of wider rubber. Specialized also nailed it with the big rubber and wide rims on Sequoia.

38’s are nice for road touring. It’s got plenty of clearance for more, so an easy change.

I just bought one in diablo red and put veto orange Zeppelin fenders on, gorgeous. I have it parked next to my K1600 GT & R1200GSA. I am now ready for retirement.

Are there any information about the “ThruSkew”-System? Looks to me like a “normal” Through-Axle with inlets for a standard 9mm QR-Axle: 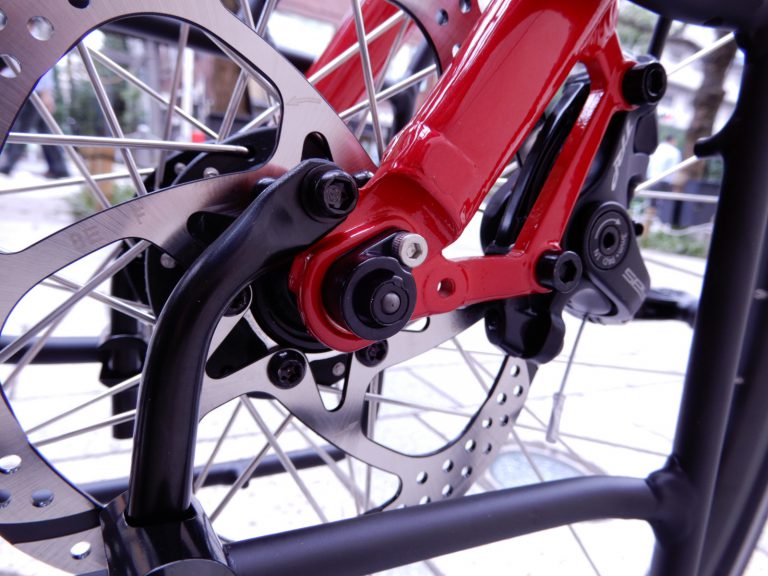