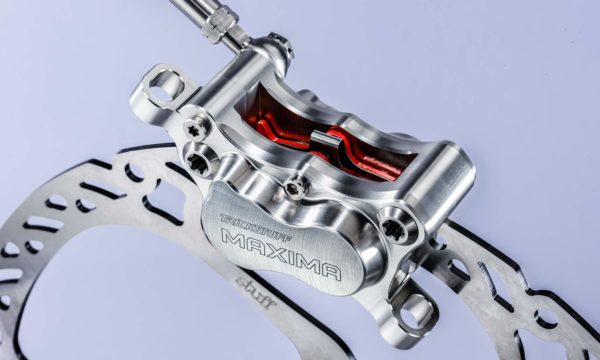 Trickstuff Maxima is set to become the most powerful mountain bike disc brake in the world. Starting with the already powerful four-piston Direttissima, Trickstuff has increased braking power by 25% with bigger pistons, more heat dissipation capacity, and lighter action levers with increased leverage. Using a crowdfunding campaign to Kickstart the ultra premium brakes into gear, the Maximas could bring your bike to a stop this coming spring.

Already known for incredible stopping power in their lightweight, machined aluminum Direttissima four-piston brakes, Trickstuff is stepping it up with the new Maximas. Initially prototyped as a special team edition of the Direttissima, the Maxima beefs up Trickstuff’s original gravity brake lever & cylinder, then completely redesigns the four-piston caliper.

The goal was to develop a race-ready, incredibly powerful brake set that was still well modulated & reasonably lightweight. The resulting Maxima is now 25% stronger than the Direttissima, making the undisputed most powerful disc brakes you can put on a mountain bike. Trickstuff’s pro riders have praised the new brakes as requiring measurably less finger power at the lever, which means ample braking and less hand and arm fatigue for technical trial & gravity riding. 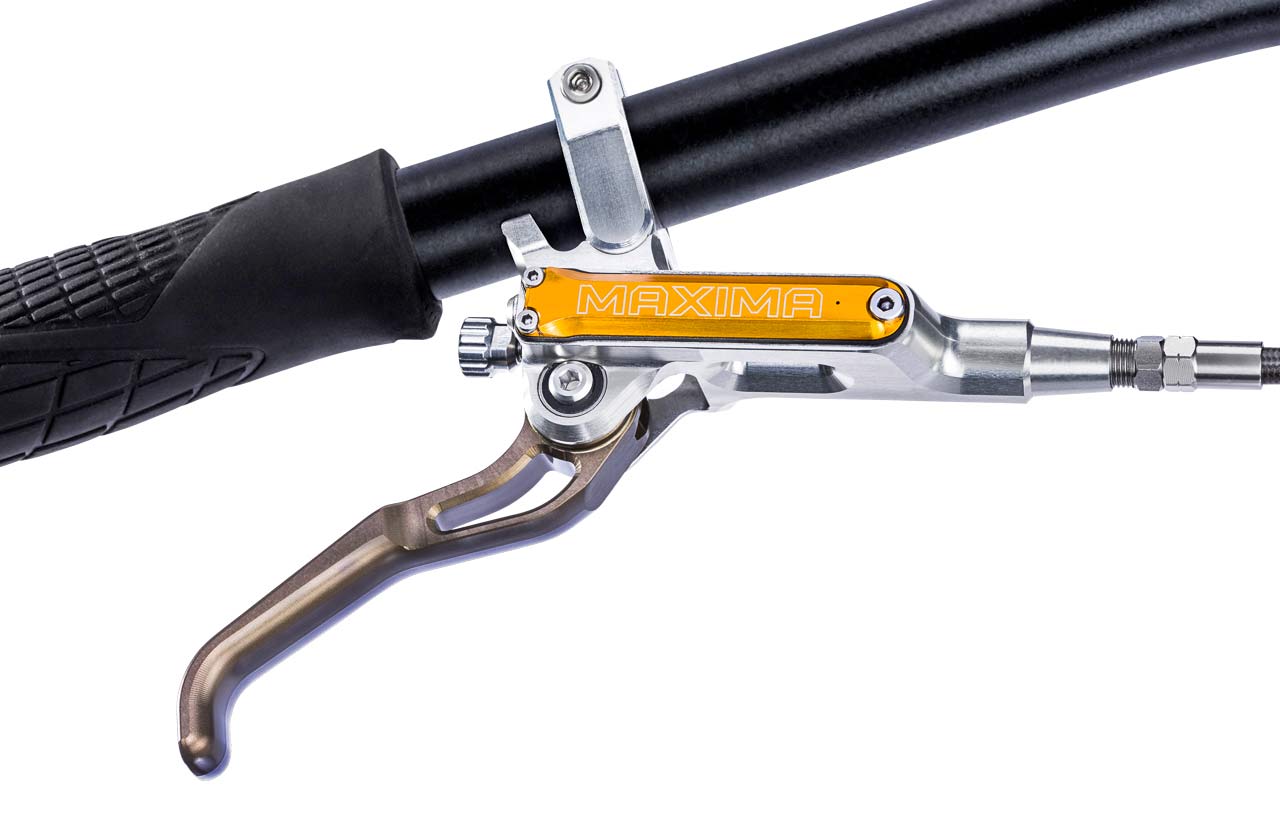 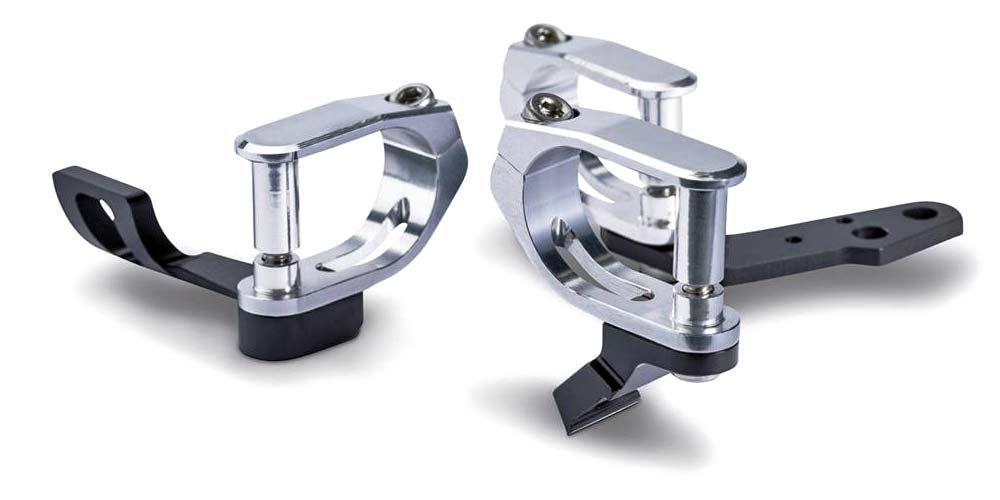 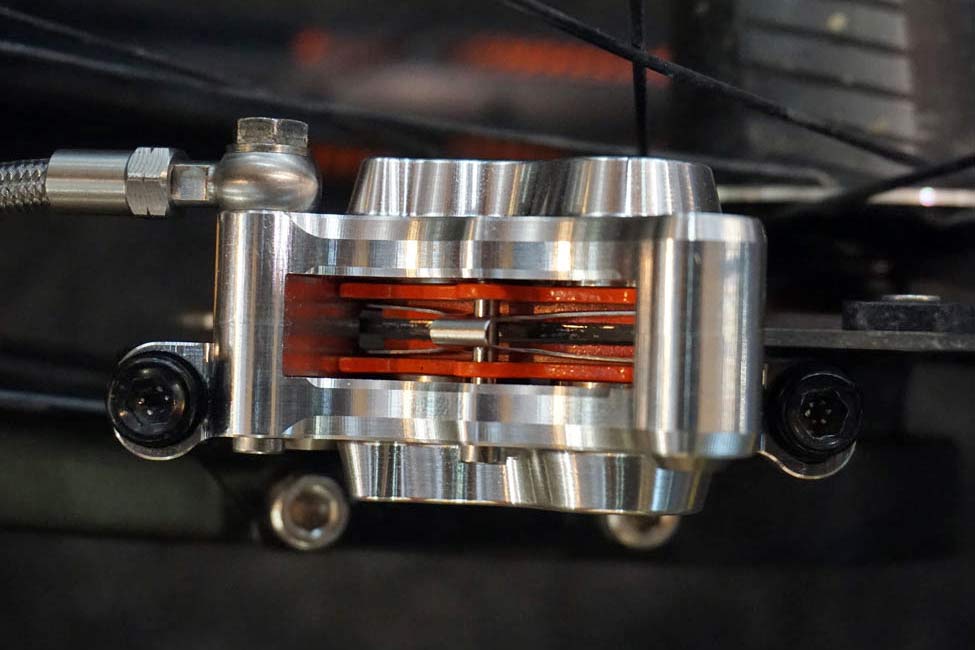 The four-piston caliper body itself is now bigger to house larger diameter 16mm & 17mm piston pairs. That large alloy caliper is both more stiff than before and can also better dissipate heat for improved performance. The Maximas also feature Goodridge braided stainless steel hoses which promise equal performance for the front & rear brakes with no power loss along the longer hose. 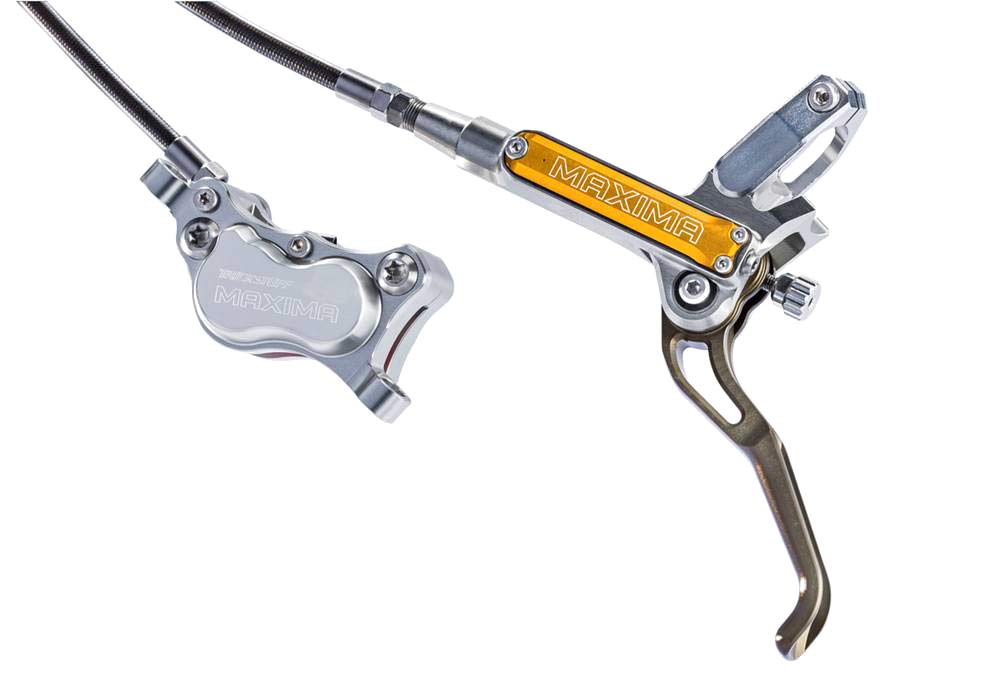 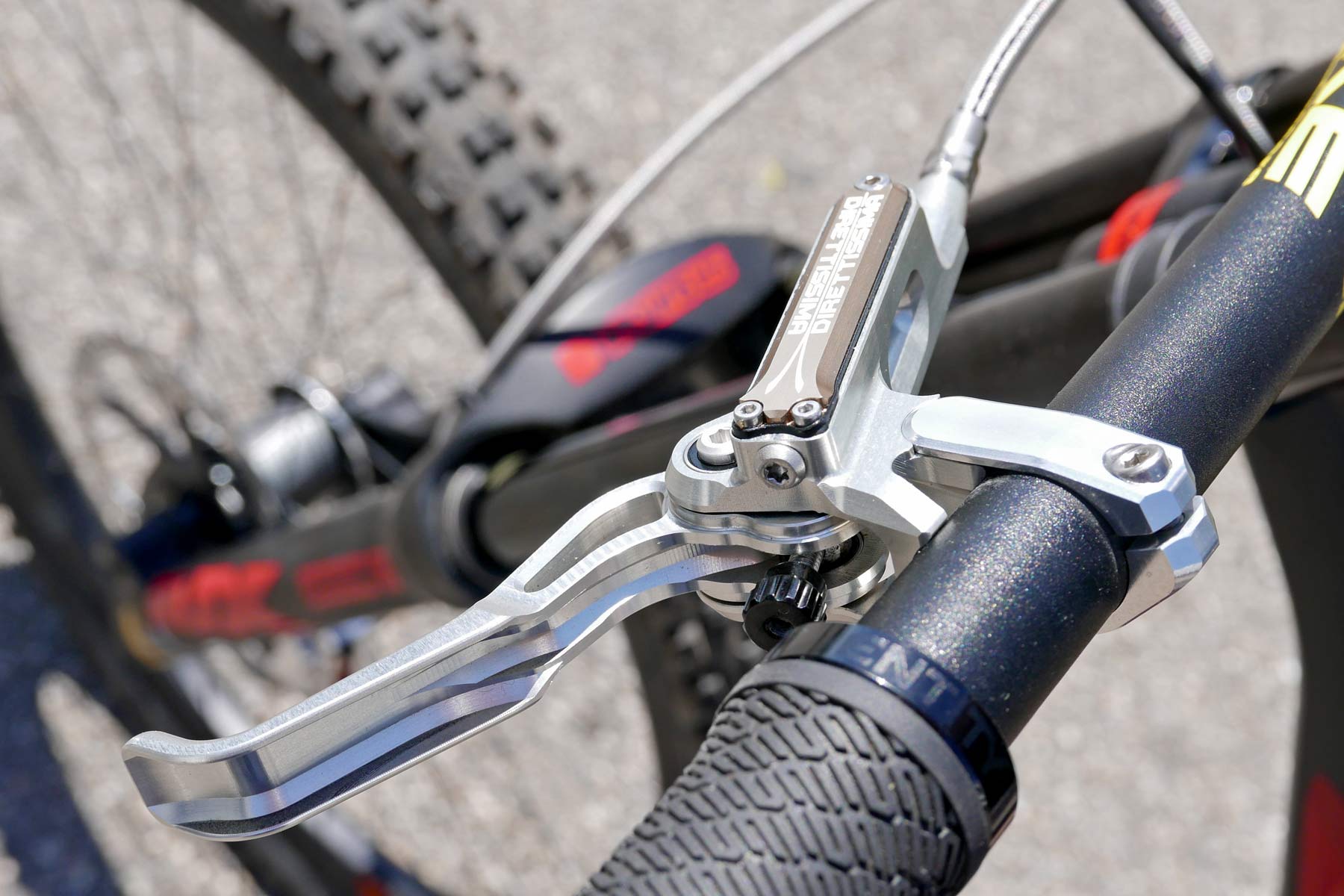 The new Maxima brakes have made their way completely through design and development, with pre-production prototypes having been real world tested since early summer 2018. When we caught up with them in late July, they Maxima’s were already being ridden & raced, but the levers still carried the older Direttissima branding & the larger calipers hadn’t yet got any graphics. 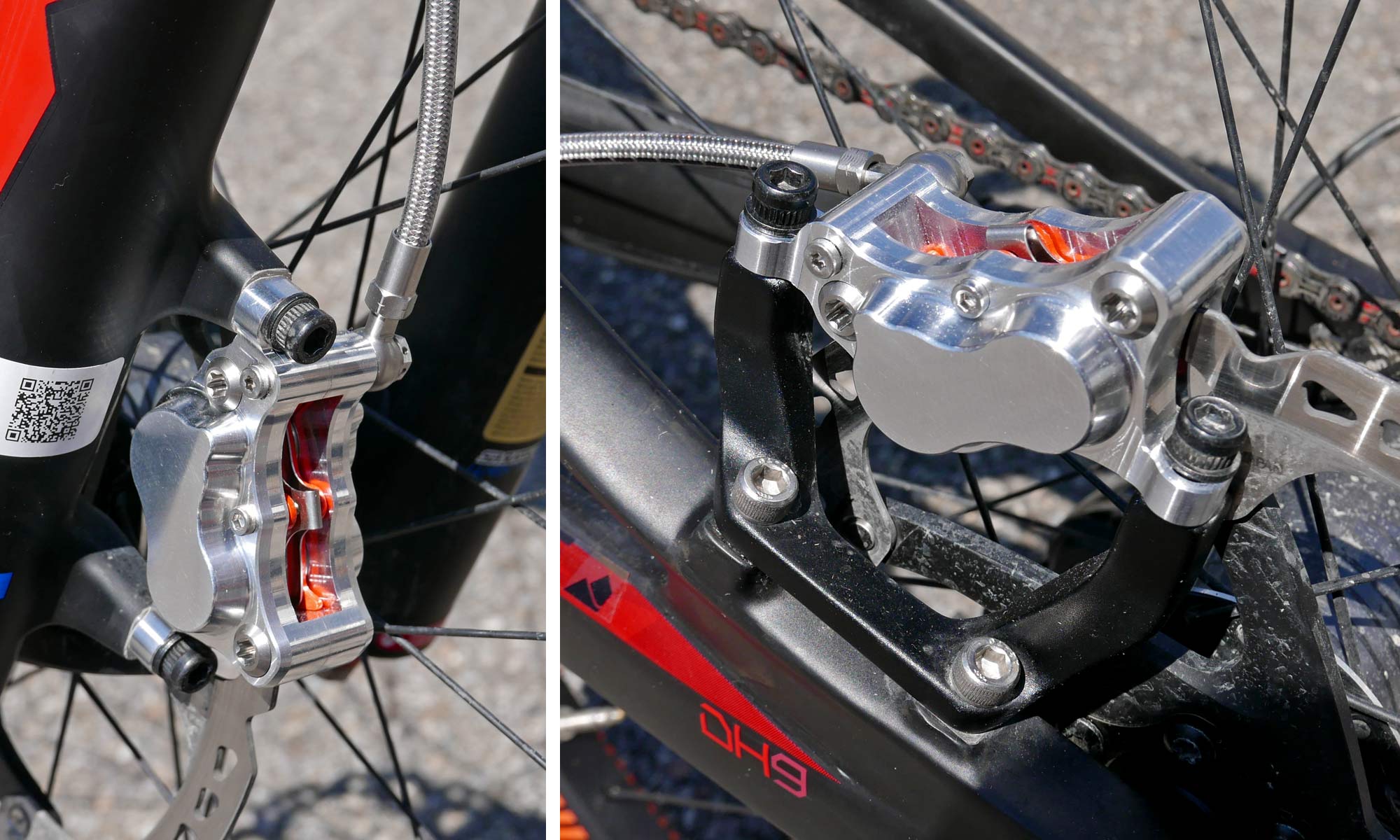 Now, this fall Trickstuff has already finalized production tool design and is getting ready to start making the new brakes. That is where Kickstarter comes in, as the crowdsource campaign is intended to gauge interest in the “World’s Strongest Hydraulic Disc Brakes” and cover tooling costs to start production. 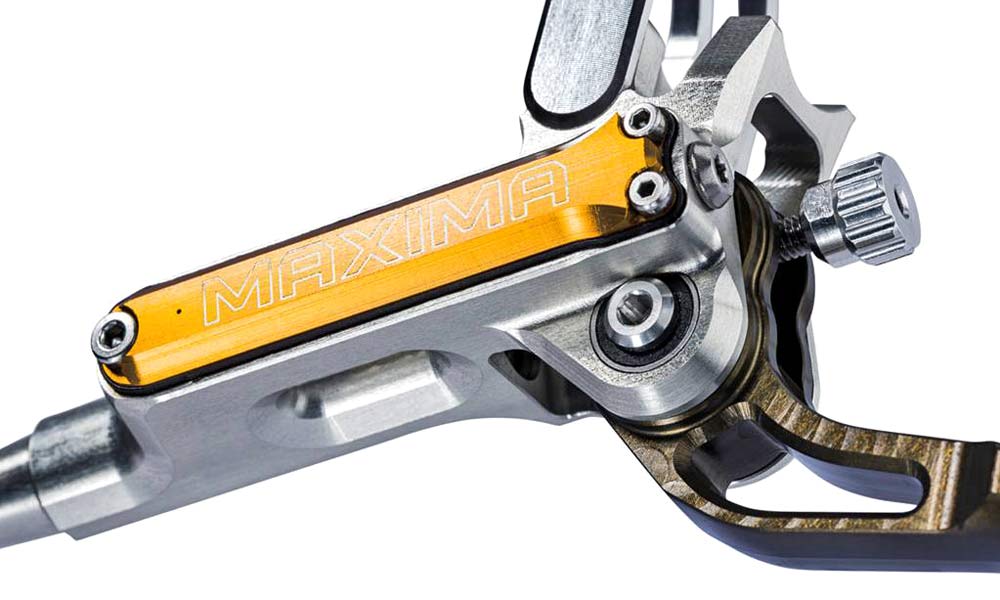 Even at this pre-order-like stage, getting a set of ultra premium, made-in-Germany Trickstuff Maxima brakes won’t come cheap. A pair of Maxima brakes will set you back 990€, without rotors (but it does come with a t-shirt & a sticker at least!) There is also a Kickstarter option to get a set of the brakes and hit the bikepark with Trickstuff’s team riders too, or even to buy enough brakes to outfit your own team’s DH fleet. Running through Jan 3, Trickstuff’s crowdfunding campaign is already half way to its funding goal, with delivery of the fist run of Maxima brakes set for April 2019.

Hmmm have the Hopes not sure for the need for something “stronger” by 46% whatever than means. It stops the rotor 46% faster at a given torque and speed? Its 46% stronger at holding the rotor when already stopped, the parts are stronger?

Why not just steal the brakes off a Honda Goldwing they’ll be around 4000% “stronger”..

46% more power for a given finger input at the lever, so you have to put less effort into the lever to get the same level of power, so less tiring on long descents. Should reduce arm pump too.

If they comes with a t-shirt and a sticker….it’s ok!

I bet I could really do some sweet skids with these babies!

Current brakes were designed for 26″ wheels. It makes sense to offer brakes for larger wheel diameters. That said, I’ll probably wait until a mainstream brand jumps in. I’m still a bit reluctant to buy boutique.

Agreed, wheel sizes like 29+ mean we need more powerful brakes. Not mentioned in the article is that Trickstuff offers a 223mm rotor (for 99 euros a wheel). That option alone would go a long way to making up the braking gap.

You mean to tell me that you believe that there has been no consideration given to wheel size when it comes to brakes in the last 15 years? That’s just ignorant.

No need to hurl insults, my friend. I try to pay attention, and haven’t heard manufacturers claiming any increase in power to accommodate larger wheels. This isn’t surprising, since makers don’t want to offer different brakes for each wheel size, and a very strong brake for 29er would be extremely touchy if used on smaller wheels. They don’t want the liability issues.

Existing brakes were designed with 26″ wheels and 203 rotors. Many of us are on wheels that are 11% -or MORE- larger. We don’t want 11+% weaker braking, just because ‘Greg’ just wants to win an argument.

Short version of this article: these brakes squeeze harder, but cost far more.

The real trial would be to supply me with a set to fit on my Touring rig . As someone who tours on a Surly Troll with panniers and bags I can go through pads and discs on wet or dusty days like no ones business.

… And degassing? If anything, degassing mineral oil is much more effective than degassing DOT.

Please forgive my ignorance- how do you de-gas either type of fluid? Is that possible at home? And how effective is it? I wouldn’t be surprised if manufacturers did that to get better brake performance, in fact, I’d be surprised if they didn’t do it, but how do you do it at home?

Nevermind! Google answered it all for me). I do wonder how much air is going to be left over after degassing… One trick I saw was to put the brake lever in a tightly closed position with a velcro strap overnight to keep the brake compressed for many hours. Then do the usual bleed procedure.
Personally, I’m a cable brake guy anyway. (Time to get out the guillotine.)
Last thing- why is degassing DOT more effective?

This is Klaus Liedler answering, CEO of Trickstuff. We do not use mineral oil in our brakes, but the world’s only biodegradable oil, called BIONOL, made from plant oil. The boiling point is higher than from any other brake fluid: It starts boiling at 300°C and finally vaporized at 420°C.

Hallo Klaus! Thanks for clearing that up. What is the gas content of Bionol compared to mineral oil? How effective is degassing?

That’s excellent performance for a brake fluid, but there are higher boiling point fluids around. If you’re feeling like money is no object for your DOT fluid systems, Torque RT700 has a boiling point of around 360 C.

Although, if you’re getting that hot in the fluid your rotors are probably having some serious issues.

I’m not the target demographic here, but on my all purpose trail bike I have more than enough power with SRAM Guides. In fact I have to concentrate on easy pulls to keep from locking the back brake when getting into switchbacks.

A good argument for a stronger front brake w/ larger rotor and a weaker rear w/ smaller. It seems to make sense that we would use the same finger effort to achieve max braking on either wheel, but people resist this idea.

These should be awesome, indeed.

But where is this heading?
Should we just start using scooter brakes?
Or lightweight moto brakes, like the 50cc world cup class?
(They use “little” 200mm rotors too.)

A longer lever to get more power seems like cheating.

The lever is not only longer it does also have a different geometry to achive more progression throughout the lever stroke. Both changes in the lever account for roughly half of the power increase. The other half comes from the larger pistons in the caliper.

going from rolling to deadly skid in no time!

Pretty and blingy. If you accept that they have a harder grip on the rotor sooner, isn’t that what some people complain about Shimano brakes. That Shimano brakes are more on/off, while SRAM brakes ramp up more slowly? I’m making no claim as to which is preferable.

Even if they are more effective at stopping the rotor/wheel, the amount of friction/traction the tire has with the ground hasn’t changed and is almost certainly the limiting factor. Too much brake equal skid and usually lost control. Don’t know about you, but my brakes are already more than grippy enough to produce this result with little effort.

You are right. We adress this in the campaign too.

“We’ve often been asked if stronger brakes are necessary. In the end all real Mountainbike brakes are strong enough to lock your wheels and allow you to skid around. More force will not help with that. That is correct but that is not what this is about.”

Check the kickstarter page. We use a diagram to help us explain what the real advantage is.

Once youa djust to the fact that you need way less power to stop your wheels you will work in a different range of force applied by the finger. This will aid your forearms and allows you to ride longer.

Regarding modulation:
See this article https://www.emtb-news.de/news/trickstuff-maxima-test/

It is in german, but the pictures should give you an idea of how much control you still have.

I’m not the target on these, but they look beautiful!

As an engineering geek, I love their quantifiable claims of comparative power.

Bikerumor.com, I think it’s a bit irresponsible to repeat such bold claims of the supposed and seemingly unrealistic increased power over other brands. Where’s the proof? Regardless, just having all the power you want is not the best thing for controlling a bike.

Trickstuff or at least Magura should make flat mount or (again) at least Shimano or SRAM compatible caliper for roadies! Like Hope did with RX4.

We do have those. They are called C21 Flatmount

Trickstuff is notoriously slow in delivering the actual parts. It’s a great product and there’s a market for such high-end stuff, but be prepared to wait for availability.

This is one of they reasons to launch the Maxima via Kickstarter. We have had Problems regarding our workflow when the demand for our other brakes skyrocketed. We have optimized a lot and are confident to solve this issue. Part of that plan is the launch via Kickstarter to allow a smooth and controlled integration of this product into our daily workflow and spare our customers from such troubles