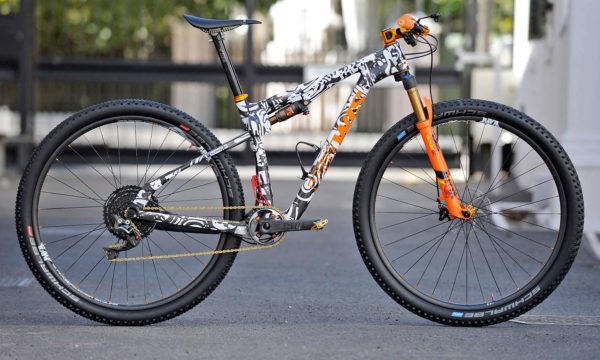 Last year we spotted German ex-World Champ Sabine Spitz riding a prototype full-suspension WiaWis XC mountain bike at the Nové Město World Cup. Well, fast forward a year and she’s on a new version, this time heavily camouflaged. Have a look with us what is different on the lightweight carbon XC race bike. 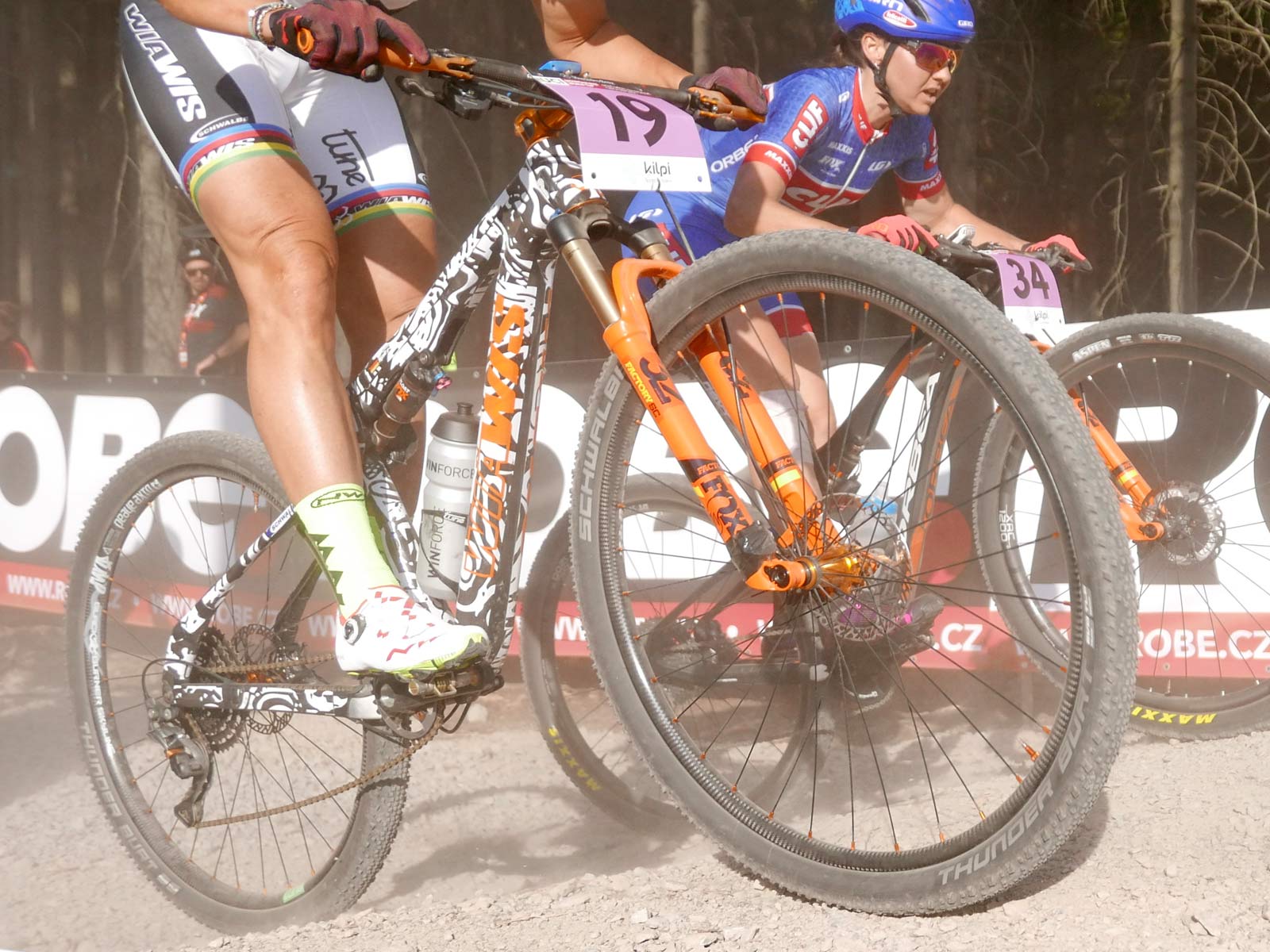 The technical Nové Město World Cup mountain bike course is sure to bring out some new full-suspension bikes each year.  Spitz actually raced the bike once already at the first World Cup round in Stellenbosch. That’s where the photo at the top provided by her WiaWis Bikes Pro Team came from.

While many elite riders race much of the XCO circuit on hardtails, the Czech rocks & roots have them reaching for some rear wheel travel. So far we’ve already seen a prototype Canyon ridden by Mathieu van der Poel (& Pauline Ferrand-Prévot) and a prototype of the upcoming Kross Earth under Jolanda Neff, both with new XTR. 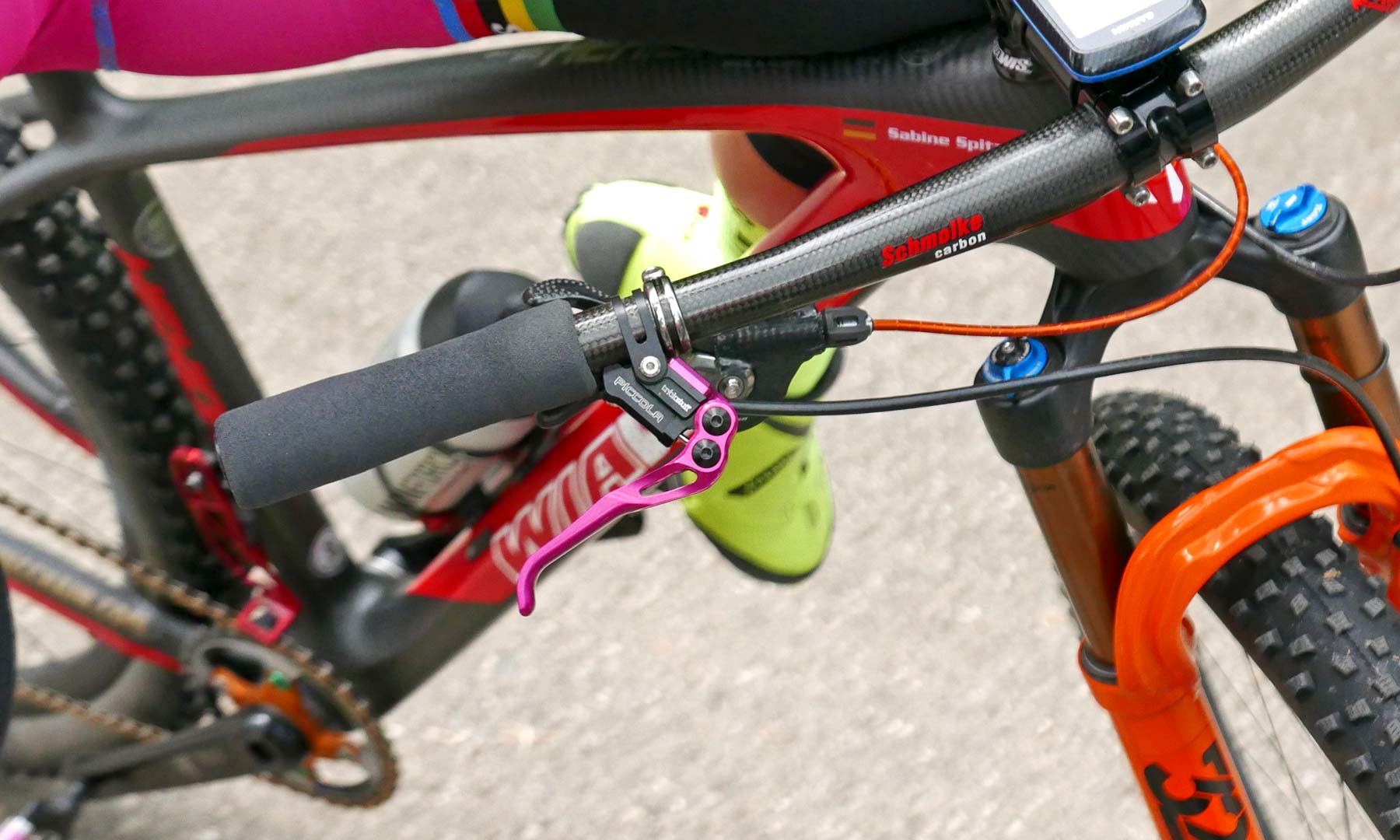 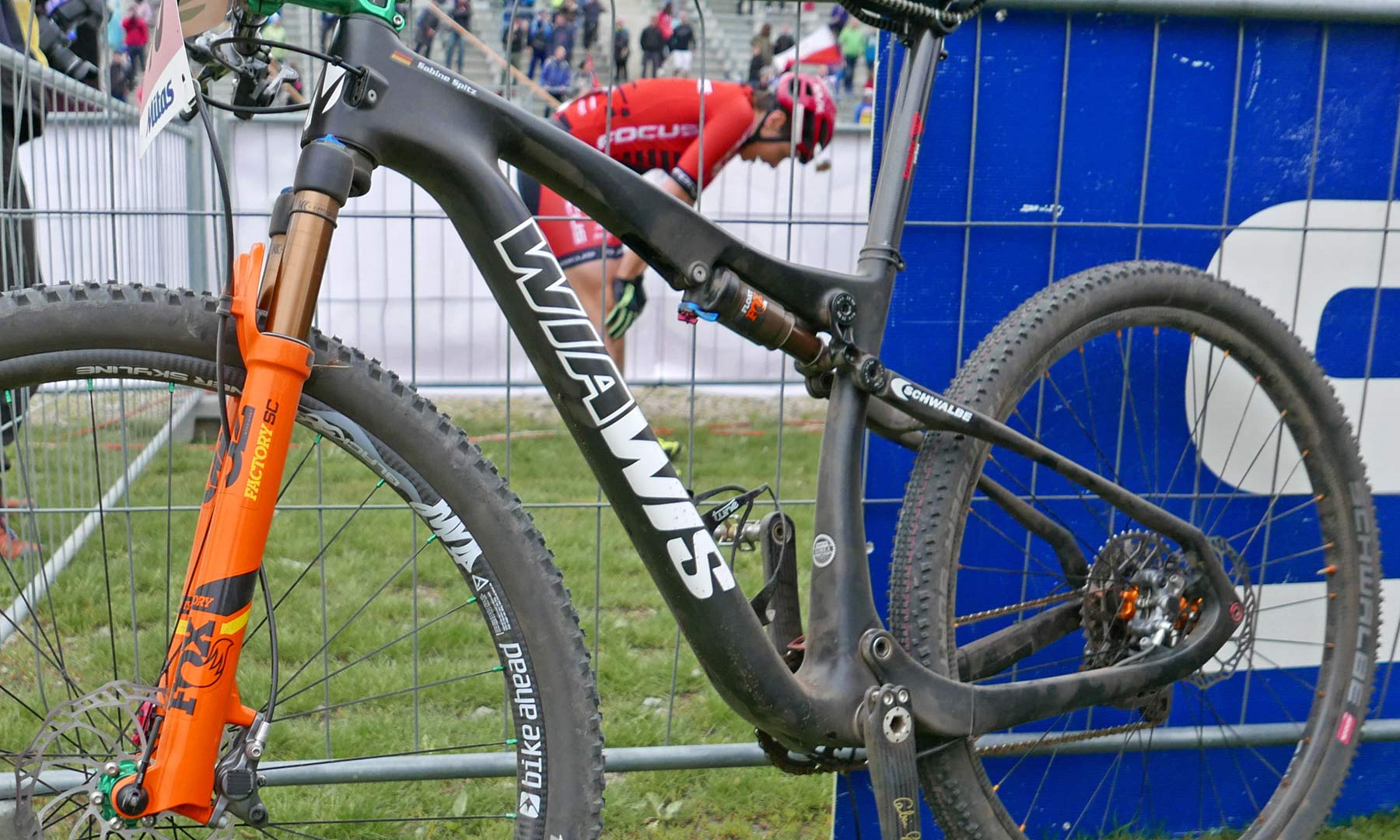 Last year we saw Spitz race herself to a podium finish on a first prototype (above) of the carbon single-pivot full-suspension XC bike. That bike featured a linkage driven shock, curved non-driveside chainstay, flexing seatstays, and a machined aluminum upper link.

So what’s new on the updated 2018 prototype? 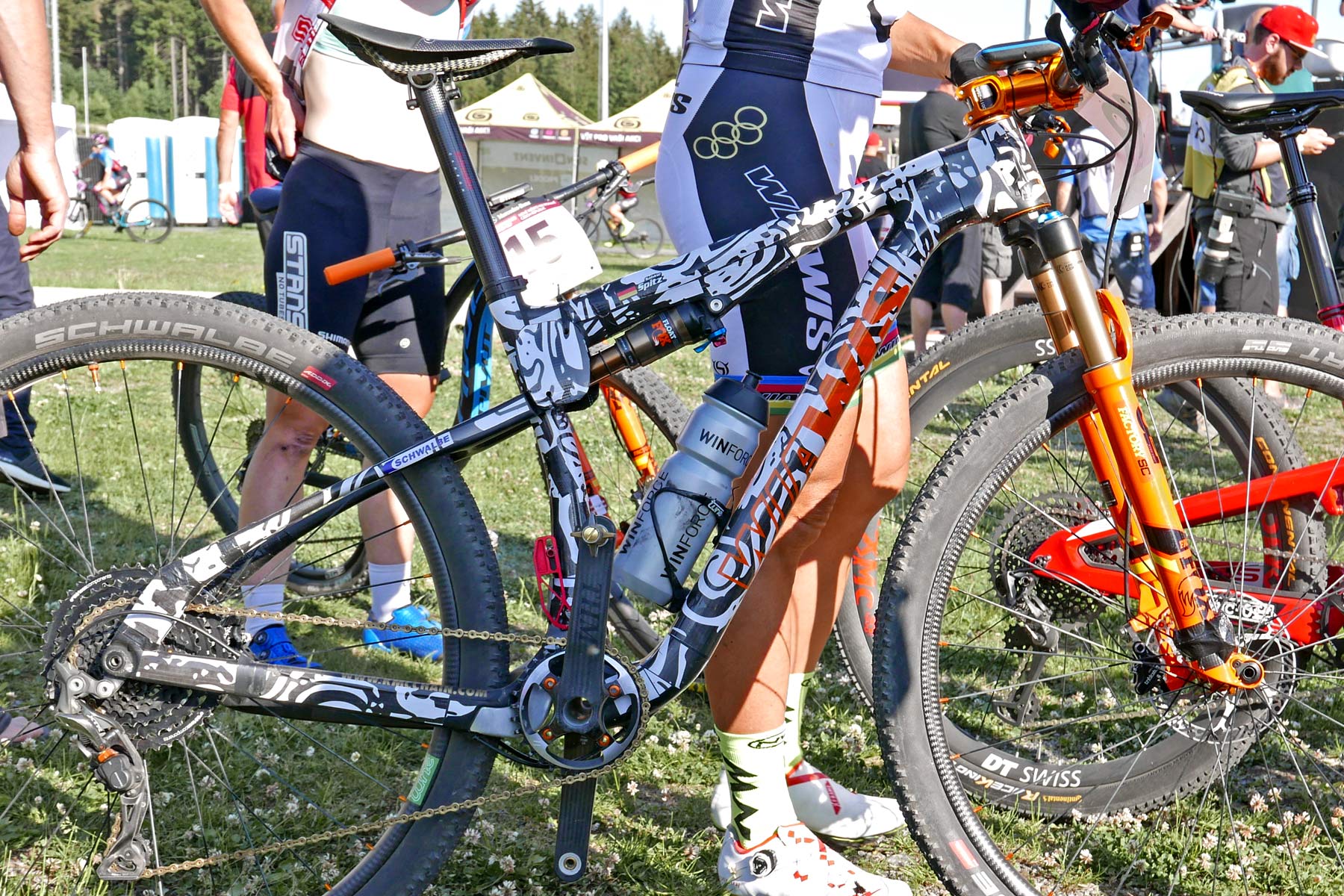 The eye-catching difference is the move from 2017’s hide-in-plain-sight approach, to a heavy dose of decal camo. And of course those small plastic covers zip-tied to the toptube & chainstays. 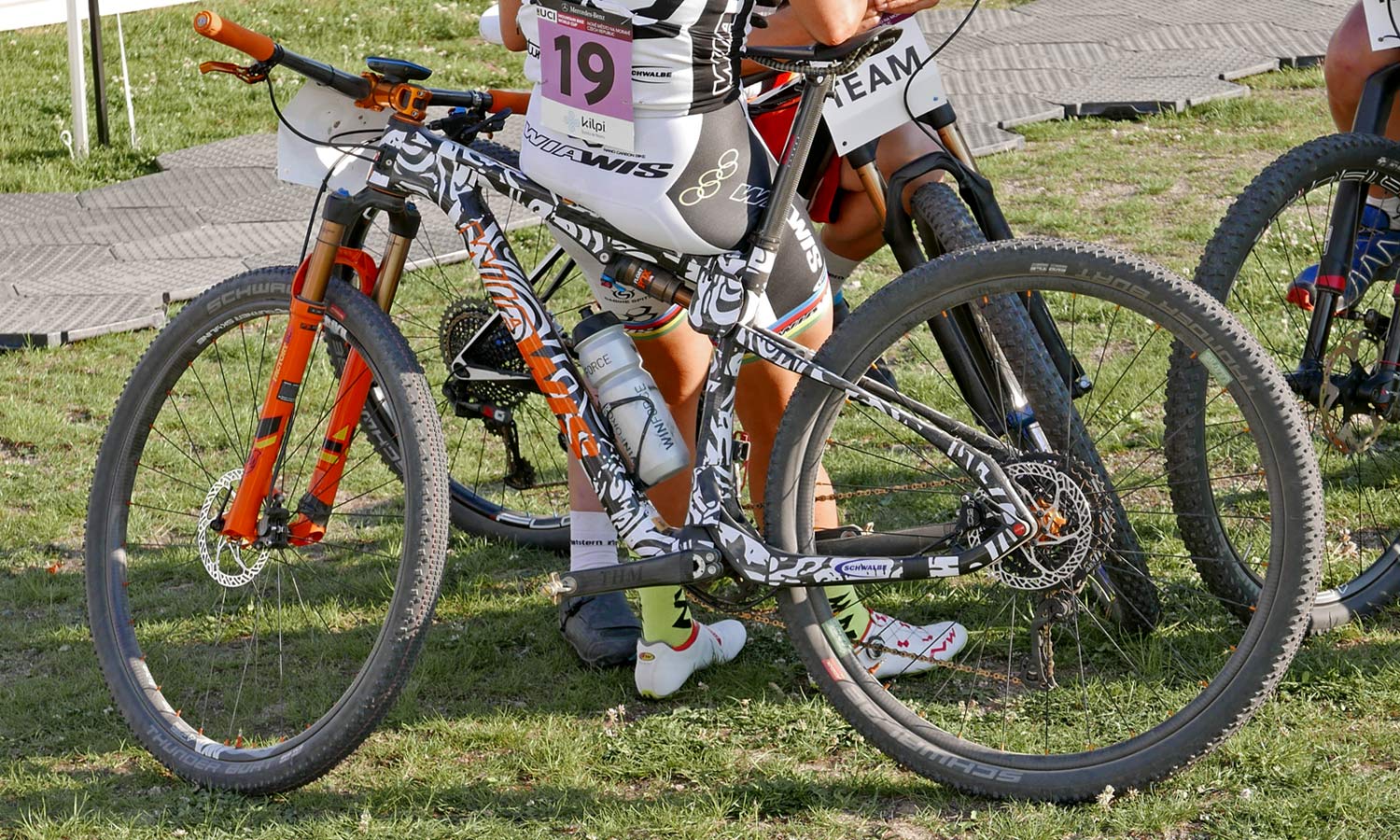 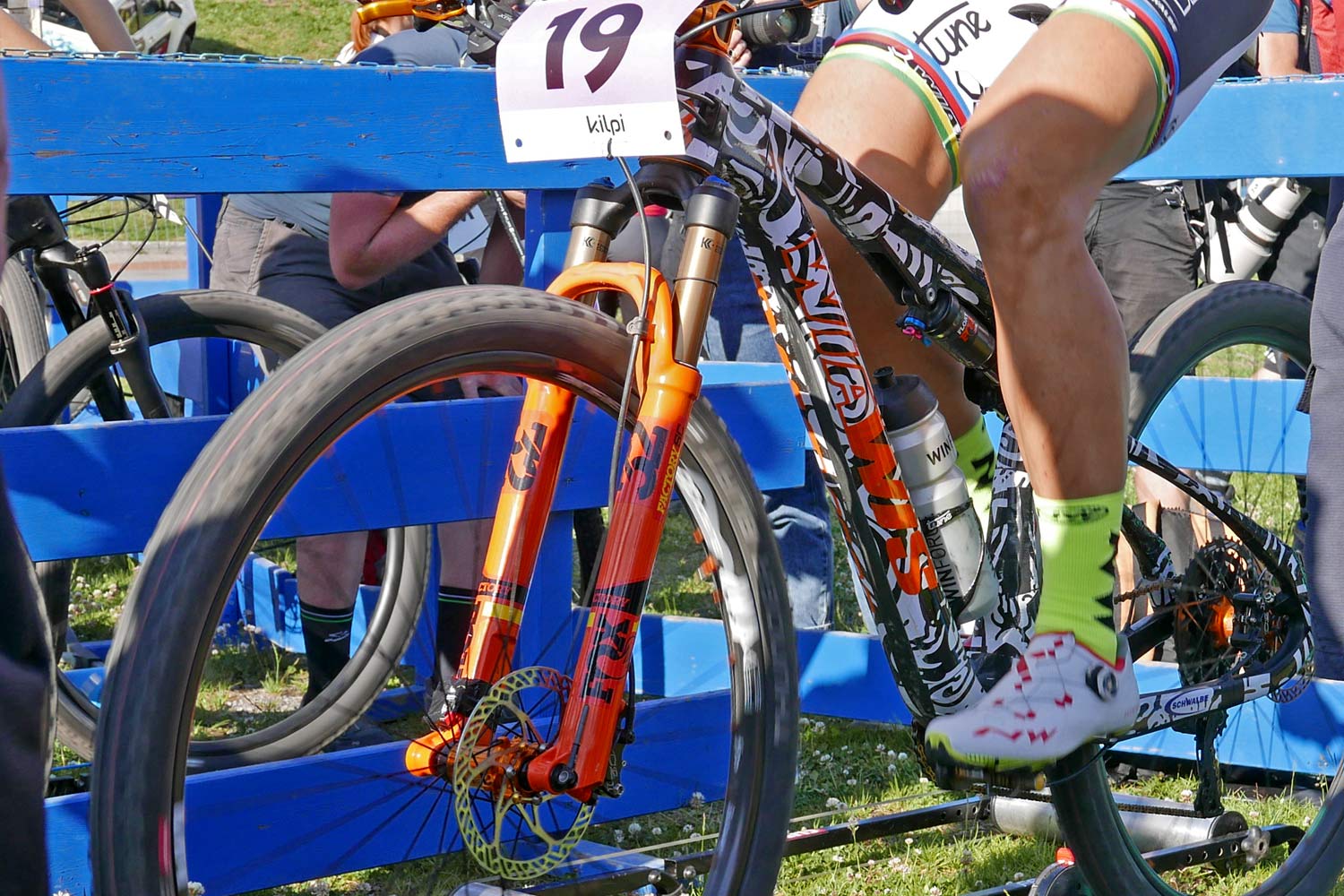 But we did get a tiny look to see what looked like the same two independent forged & machined alloy rocker links, one on either side of an axle through the lower shock bushing. 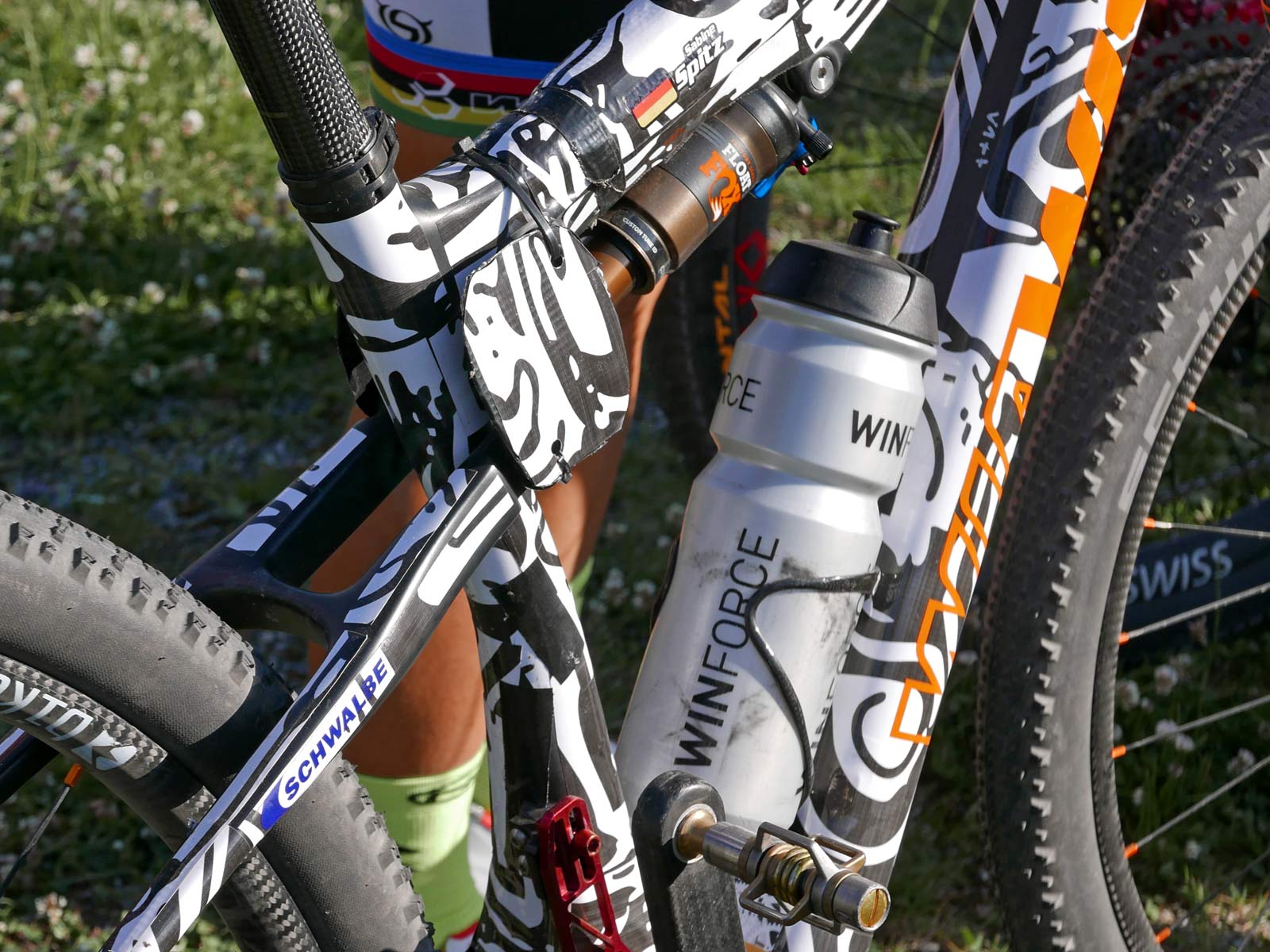 The chainstays remain wide all the way to the seattube, where they step back with the alloy rocker links attaching to the outside of the stay assembly. Those zip-ties are fastened through the hollow pivot hardware at the end of the seatstays. 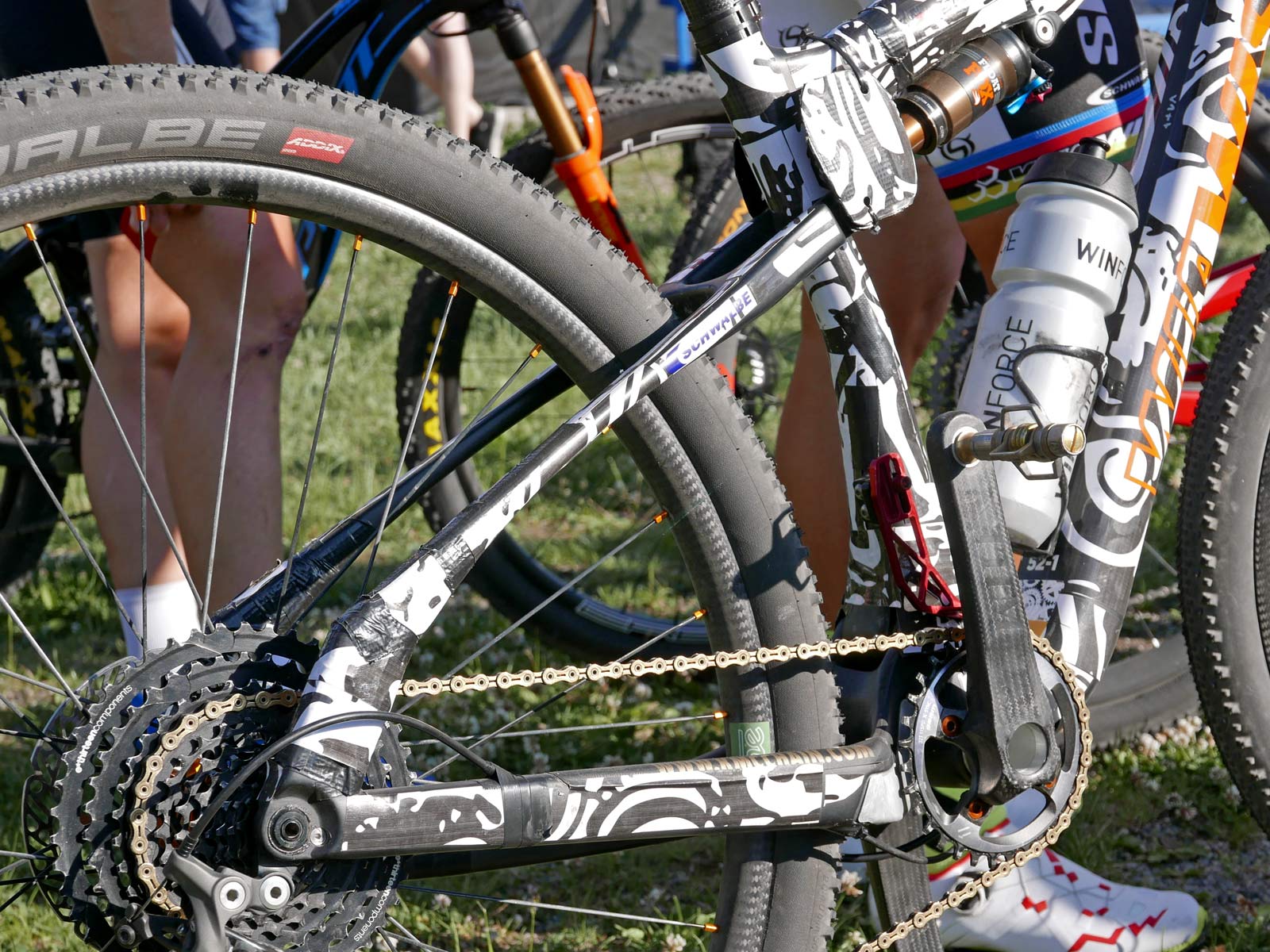 On the driveside, after dropping down from the main pivot, the bike gets a straight chainstay that incorporates an anti-chainsuck plate and internal cable routing. From the looks of it, the leg of the seatstay as it rises up from the thru-axle dropout is much deeper than the bike Spitz raced last year.

But a close look of the camouflaging & masking suggests that WiaWis may have simply taped in some extra material there to confuse us trying to take spy shots of the new bike. It’s entirely possible that this is the identical rear triangle we saw last spring. 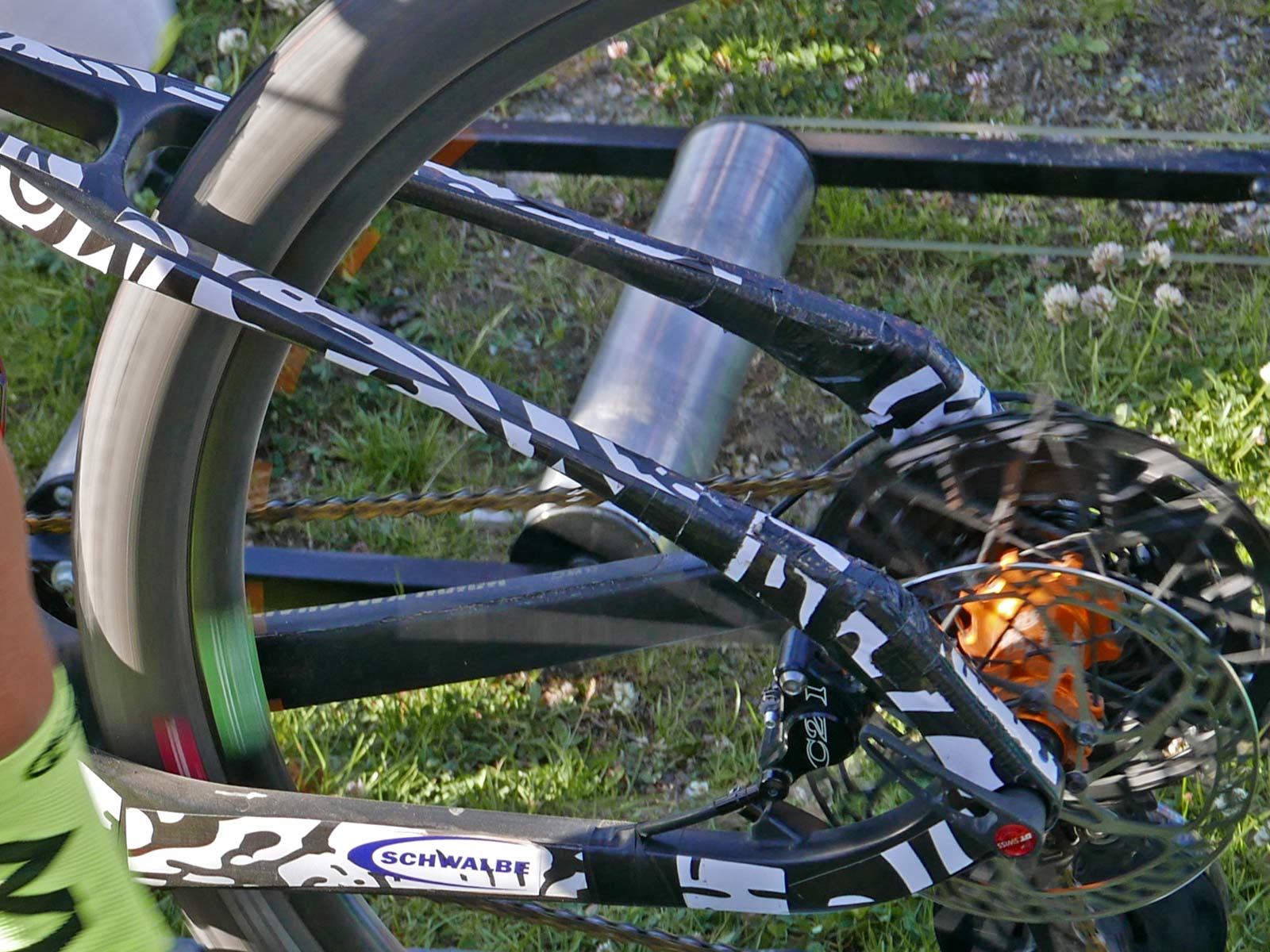 The non driveside chainstay looks to retain the same curved shape that smoothly drops down from the high single pivot up front to allow for a chainstay bridge and adequate tire clearance, and at the back dropped down for room to fit the post mount disc brake caliper inside the rear triangle. Like on the other side, the leg up from the thru-axle appears thicker than in the last prototype.

It should be noted that both ourselves and several readers saw strong design parallels between these WiaWis bikes and the prototype carbon Stöckli XC World Cup full-suspension XC race bike we saw back at Eurobike in 2015 manufactured by Bike Ahead (and eventually led to the creation of the Stoll bike brand by the Stöckli team manager Thomas Stoll.) That’s not a giant leap as that prototype bike didn’t move forward with Stöckli apparently moving away from bike development to focus on their skiing core. Plus, German Spitz is obviously a fan of überlight, premium German-made bike gear like the Bike Ahead rims on her customized Tune Black Burner Skyline wheels. 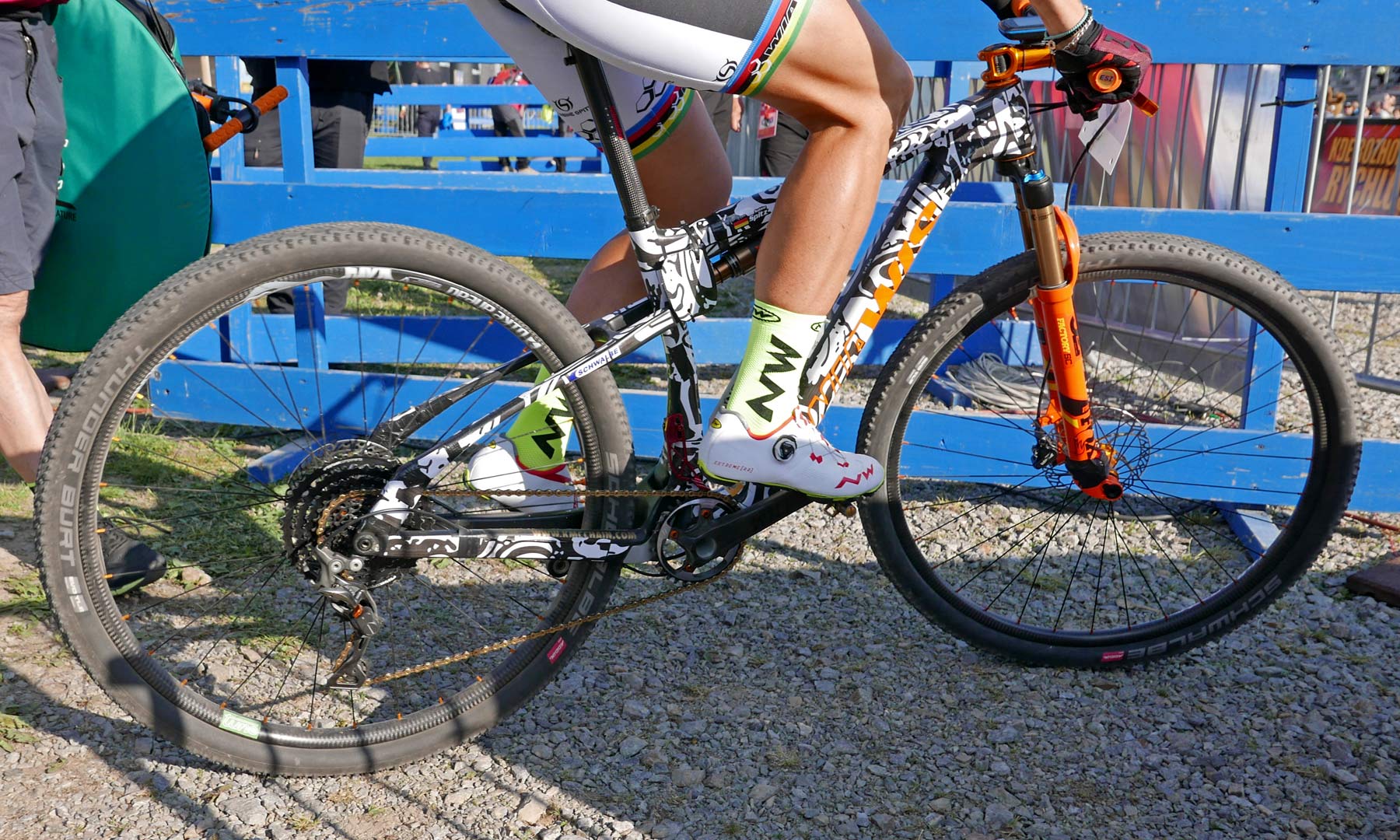 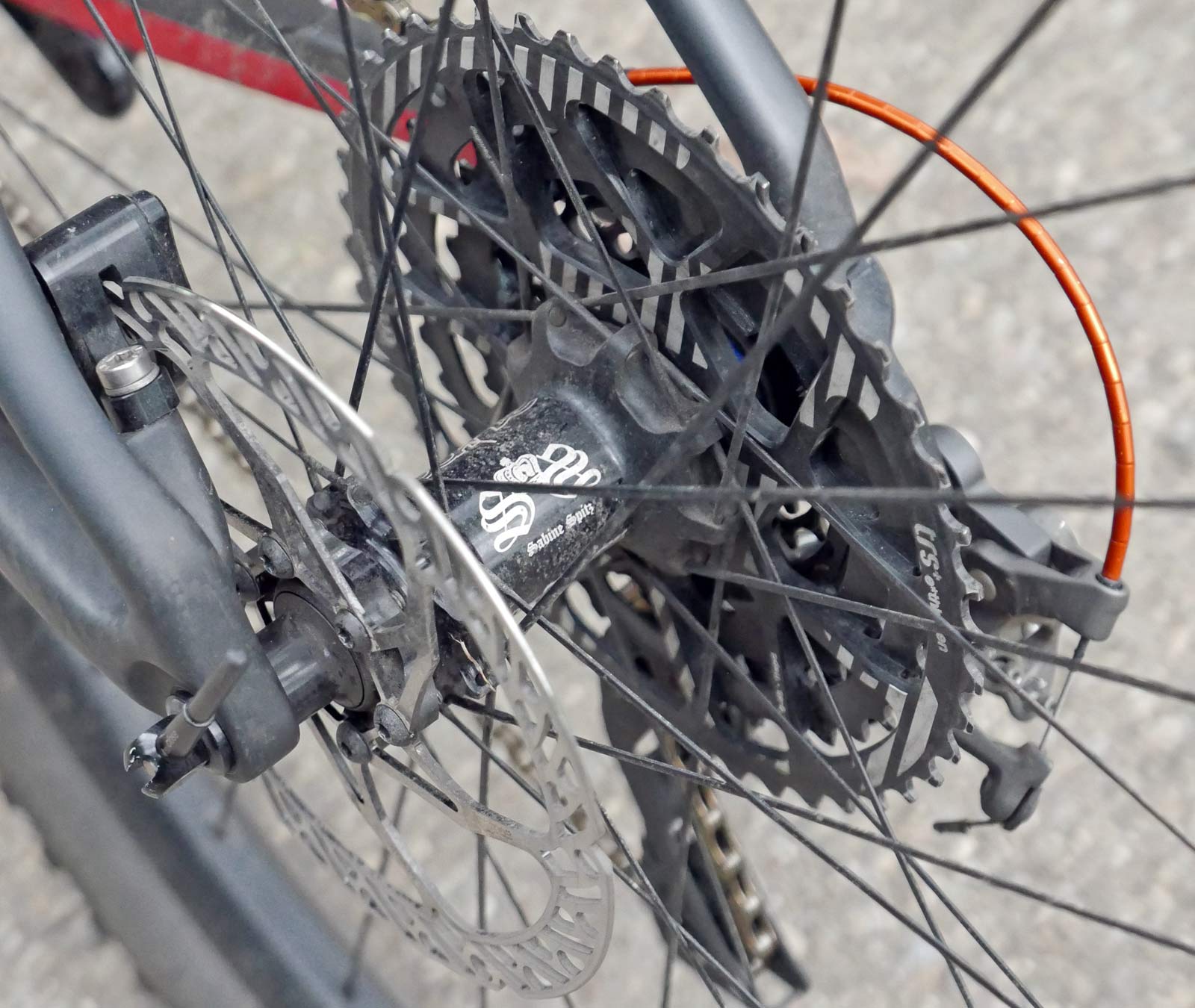 “spins an e*thirteen TRSr 11-speed 9-46 cassette”
unbelivale that a pro uses such low performing products (shift quality and steadily) in a WC race.

Pfft. Schurter uses electronic SRAM in WC race and loses it because of that. What gives?

Looks like an epic and spark got together and had a baby.

The most interesting aspect of her bike is the camo frame protection kit .