Ever wished you could have dumped a few gears before you reach that quick little riser? Or maybe you just want to be able to shift whenever you feel like it, without having to worry about when or where?

That is the idea behind the new HxR Easy Shift Crank. While the idea itself isn’t new (trials bikes, old Schwinns, etc. have used a similar concept for years), HxR seems to be one of the first to apply the concept to a 1×11 enduro drivetrain. Built to hold up to the abuse of today’s trail and enduro rigs, the Easy Shift crank is a product of France based HxR components and is finally ready to hit the trail… 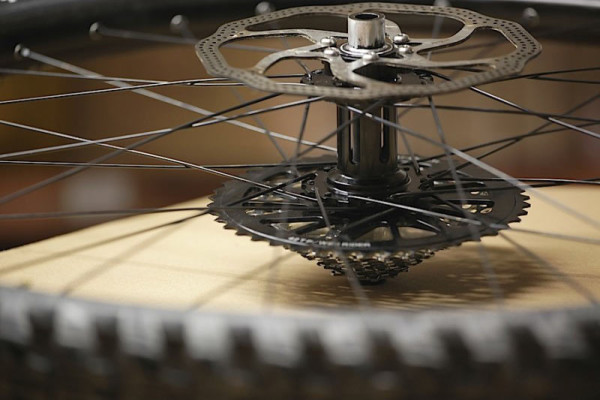 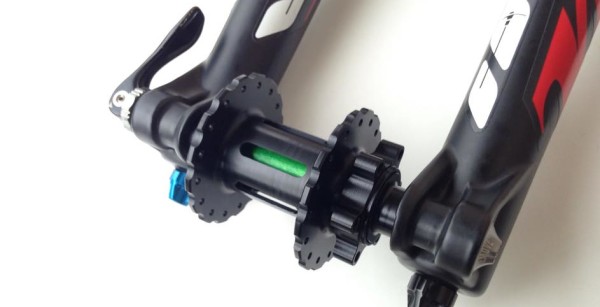 The key to the HxR system is the inclusion of a fixed rear hub. This keeps the chain turning at all times and when combined with a freewheel built into the crank, still allows you to coast. Since the chain is always turning on the cassette, that means you can shift the rear derailleur whenever you want. We’re assuming the best practices of shifting still apply and you shouldn’t shift under full load when climbing, but when coasting you’ll be able to get in what ever shifts you want which could be helpful in technical situations.

For the system to work properly, you have to use a fixed hub (freewheel hubs would still work, but would negate the system’s benefits). There aren’t many out there meant for enduro bikes, so HxR sells their own in 135mm QR, 142×12, and with Shimano 10/11 or SRAM XD drivers. If you’re the type to want matching hubs, they also supply a front 15×100 6 bolt hub to complete the set. Kits are sold in three levels – the first with just the crank and bottom bracket kit, the second adds a narrow wide chainring and bolts, and the third includes everything – front and rear hubs, chain guide, and chainring for €995. The Kit-1 is available for €449. 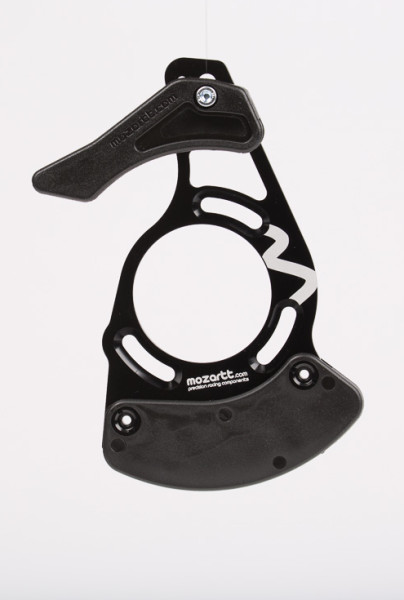 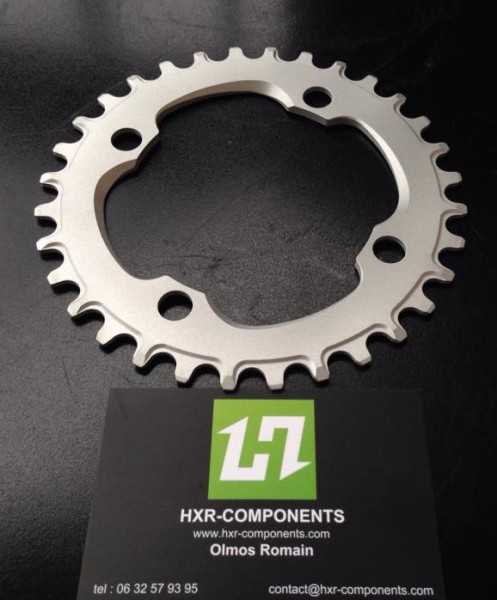 HxR indicates that the system is only compatible with narrow wide single chainrings, and you must use a chainguide with and upper guide and lower impact protection like their own HxR guide shown above. We’re assuming a freewheel equipped chainring won’t be able to take much of an impact, and with the chain constantly moving that upper guide will come in handy. The crankset is equipped with a 94mm BCD spider and is compatible with other 94mm BCD chainrings down to 28t.

Listed as BSA, PF30, and BB92 compatible, each kit includes spacers for all three standards. Claimed weight is 773g for the crank and freewheel assembly, without BB or chainring. Also included in each kit is a small bottle of Squirt chainlube and clear crank skins from HxR.

Available now for preorder, cranksets will ship in February.

Cool.
I have a similar set up on my trials bike.
I am going to keep a eye on this one

This is really interesting. Think of how strong you could build the ratchet mechanism within the crank as opposed to the hub. This is innovative.

This would be so much fun to have with a Q ring attached to that crankset.

Anyone who wants to try the system out can just jump onto an old Ross Eurosport with the FF system. You should be able to pick one up at Goodwill for ~40 US.

Interesting. Would like to see a tech-focused video instead of this hype video.
Sure, shifting without spinning the pedals is novel, but what are the drawbacks to having your chain ALWAYS running?

Like he said: if the chain falls off, ouchie big style!

If you have ever thrown a chain or jammed a shift in rough terrain you will know why this system is unfortunately a no go. The moment your chain isn’t running as it should you have a rear wheel (and all your momentum) driving the chain. I think this could leave some serious mangled messes when things are working as they should.

thanks to all the slo mo I pre ordered 10!! Thumbs up!

Whats the engagement angle. One benefit is that the speed of engagement will be the same whatever gear your in.

Typical of engineers. An a** backward solution to a problem that doesn’t exist.

I think you are confusing engineers for marketing staff.

Wouldnt like to get a pant leg or shoe lace caught up in that system. Seems a little dangerous having a chain moving like that without a cover. On motorcycles, which this is similar too the chain is guarded

Once again, if this was really the way to go, we’d all be on it already.
Not even a resurrection of an old concept, as some competitive trials bikes still run fixed rear hubs.

Fixed multi-gear bike any one?

Why not just work to make shifters better? I run Gripshift on my XX1 equipped XC bike and it’s super easy to dump a bunch of gears for a sudden climb. Modern systems can already handle the stress of doing that, so just find a way to put that into a traditional trigger shifter.

SRAM had a prototype system like this for DH bikes around 2000 or so. I remember HB racing it toward the end of his racing career. He said you really need a hardcore guide system and even then, sometimes unforeseeable things happen, which is why it never saw full production. I am surprised they don’t even have a lower guide on this thing, and as someone who had had a shoelace caught in a chain, I wouldn’t feel safe running it. You would need to recognize that there was a problem and lock up your rear brake in an instant to save your bike/self from disaster.

There are pros and cons to each system. For me personally, conventional rear freehub systems are a better choice. I can’t really think when I really needed a shift without pedaling. But again, that just me. Good to have options people!

Getting a stick stuck in your drivetrain is going to really suck.

And you get the added benefit of accelerated wear on the drivetrain!

I’d be curious to see if the “freehub” is machined as one piece with the rest of the hub shell, or if it’s still two pieces for manufacturing ease. If two pieces, there could be a stiff disengagement override type of safety feature built in, if desired, for those eventual stuck sticks n such.
In DH, I believe the super awesome Honda bike had constant engagement, IIRC…

This is how the old Shimano FFS system worked. It used a thread-on gear cluster without a freewheel mechanism, but the individual cogs were allowed to slip counterclockwise in a pinch, so they weren’t strictly fixed. The action was very stiff so they were still able to drive the chain forward at all times.

(This was before gear clusters (I’m struggling not to call it a freewheel…) had significantly shaped or profiled teeth, so it didn’t matter if adjacent cogs were lined up.)

The Shimano system worked OK, but was mostly spec’ed on pretty lousy bikes – steel rimmed cruiser style bikes, almost always paired with Positron stem shifters. They live on mostly as college kid rustbucket single speeds, as the shift wire is usually broken so you can only shift up from the lever.

better make for d*mn sure your derailleur is dialed so it doesn’t over shift into the spokes, that would be a spectacular rear wheel catastrophe.

Shimano’s FFS (Front Freewheel System) from the 1970’s did the same thing. Note, it wasn’t a long term success.

i am glad someone else knew that Shimano already had the freewheeling crank even before modern index shifting. I was starting to lose faith is the readers of this site.

I had a Shimano FFS bike. It was pretty cool!

So what if it is an old concept? Advances in materials and manufacturing technology constantly make older ideas like FFS that were once failures a possibility today. If anything it should be evaluated on the basis of the pro’s and con’s of having a chain in rotation constantly. To me, the obvious issues with that are accelerated chain wear and what happens when you drop a chain.

I’ve seen this before, a year or two ago, probably on this site or one of its competitors.
Nice concept, but could be a bit dangerous to have a “chain saw” running close to your leg just waiting to cut body parts in case you fall over.
Otherwise cool.
Video should emphasize more of the technology and its benefits instead of the slow motion and picturesque scenarios.

Shimano used to claim that FFS stood for Front Freewheel System, but I think it really means “For F**k’s Sake”, given how well it worked.

This deserves to die without trace.

Ahhh – remember the front mech/derailleurs? Now that was an easy quick way to drop into the gears you might need for a steep shot. This sounds like a lot of changing buts for no real benefit. Learn how to shift, and keep you eyes ahead so youre ready for whatever comes. Cant we all jump through our 11/12 range in 2-3 trigger throws? This sounds like an attempt to replace skill (like a lot of the current innovations were seeing)

For 60 euro on AliExpress ( cranckset with freewheel)