This is the second post of 2011 Mavic road wheels, this time with the full range of Cosmic, R-Sys and Ksyrium wheels. The first post has more specs and their new tubular and clincher tire systems.

Word is, Mavic has created a special, super-hard new braking surface called Exalith, which goes on the Cosmic Carbone SLR, R-Sys SLR and Ksyrium SLR. It comes with special brake pads, too.

Shown above is the Cosmic Carbone SLR. Get a face full o’ photos of this and the rest of the new hoops after the break…

Click on any photo to see it giant sized.

Shown above is the Exalith braking surface treatment. Looks like sanded carbon.

The 2011 Mavic Cosmic Carbone 80 is the tallest deep V carbon rim they’ve offered in the Cosmic series, and it’ll have three sets of decals. the black ones you see here flash white when direct lights (headlights, etc) hit them, which is illustrated in the other post.

Need more? Yeah, you know you do. Check out the Japanese blog’s Picasa album where we found these…they have additional photos of these wheels, plus all of Mavic’s new shoes and clothing, too.

Big props to Bogdan Ioachimescu for the links and info on these, and thanks to Swacchi for use of the photos. 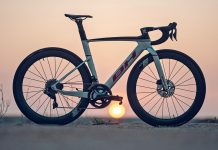