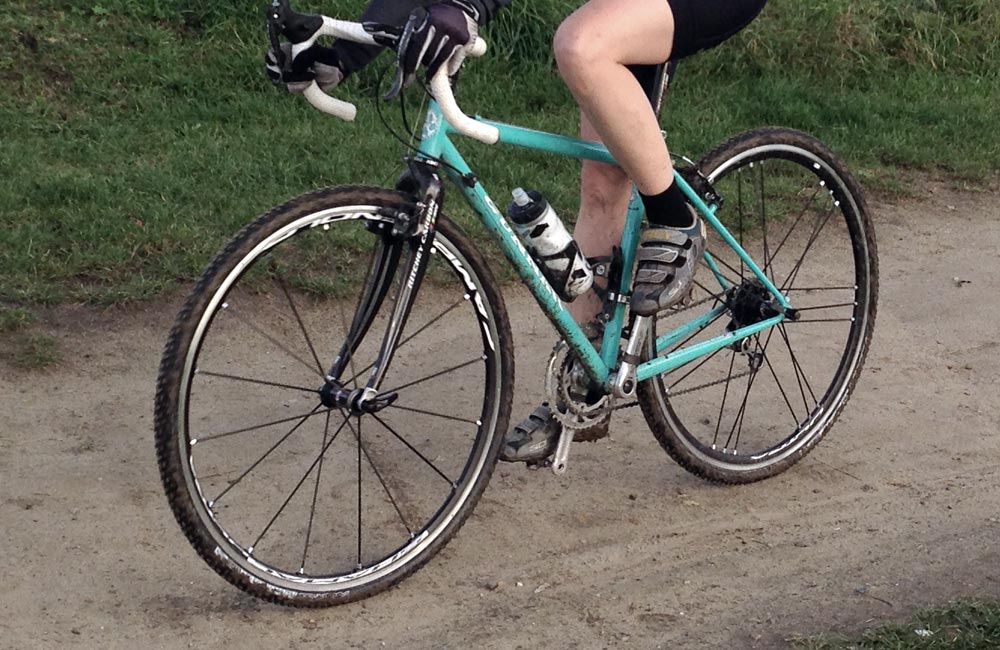 Our season long cyclocross test got underway a few weeks ago with a mix of bikes, components, and clothes. Over the next few weeks we will introduce the items that came in from the start with our first impressions from the first few races and last minute bits of preseason training.  As wheels and tires seem to have one of the biggest impacts on cross and offer great bang for your upgrade buck, we thought we would start there.

We wanted to build up a steel project bike with a lower cost groupset that our readers could actually afford, so we agreed with Campagnolo to test their Athena 11 speed gruppo. With that Campy sent us a set of Shamal Ultra aluminum tubular wheels to glue up some cyclocross tires. They were so nice and shiny looking when we pulled them out off the box, that even before we had the chance to build the bike up we quickly glued some of Tufo’s new Flexus Primus tubulars on and put the wheels to dirt on a couple of 10 speed Campagnolo-equipped bikes.

Roll on for some more detail pics, specs, actual weights, and our first thoughts on the wheels… The wheels have a pretty lightweight, 21mm wide aluminum rim extrusion (30mm deep rear, 26mm deep front) that is post machined between the spokes to lighten it even more. They have a solid, continuous rim bed which made it a dream to glue up. No more of the mess of filling spoke holes up with glue, it will be really nice after stripping and gluing a few more sets of tires on them down the road. Spokes are Campy-special bladed aero aluminum with proprietary aluminum nipples; lacing is 16 radial spokes for the front, with 21 of Campagnolo’s G3 2:1 lacing for the rear. I’d been a little skeptical of the unique lacing in the past, but after several years beating a Khamsin G3 wheelset as hard as I could on and off-road, I feel safe saying that balancing rear drive and non-driveside spoke tension, G3 lacing creates a durable wheel that likely will go several thousands of kilometers without needing truing. I’m still hesitant about the proprietary spoke design, as you would definitely end up waiting a while if you ever break a spoke, but with the balanced tension and these big spokes that should be even less likely than normal. The wheelset comes with a spoke tool, a bladed spoke holder, bladed spoke wheel magnet, as well as a few other nice accessories. The wheels ship in a set of wheelbags that you’ll be hard pressed to stuff a cyclocross tire in. (I had no problem with a 30mm tire, a 32mm was really tight, and these Tufo 33s meant I couldn’t really zip the bags all the way, oh well.) Because of the deeper rear rim, a 15mm valve extender is included. I needed one to mount the rear Tufo cross tubular, but actually hadn’t seen the included extender, so used a longer one from Tufo on the rear. Another nice addition are the solid Campagnolo internal cam skewers. With steel axles and an all metal mechanism, they are not that light (121g), but like the similar pieces from Shimano have far superior action and clamping force than any lightweight external cam options. Both hubs have a carbon center section shell with aluminum flanges designed to use straight-pull spokes. The front and non-driveside rear flanges have side-loading spokes with a bolt on cover that cleans up the lines a bit (and should keep cyclocross mud out), while the spoke head engagement is visible on the oversized driveside rear flange. Both hubs are also built up with Campagnolo’s ceramic USB (Ultra Smooth Bearings) bearings. The first impression under both an 80kg and a 55kg rider was the fast spin up of the wheels and their smooth rolling. Having ridden the wheels so far in both dry and damp (but not muddy) conditions the wheels seem noticeably quicker than the everyday Khamsin and American Classic wheelsets that they swapped out to replace. The wheelset really seems to act like a lighter wheelset. Perhaps as a result of the milled out rim and aluminum spokes and nipples, their weight seems to be more in the center of the wheel where you feel it less when riding. Another thing we noted was stiffness, making the wheels tracks well, although well need more time on a broader variety of terrain and conditions to be sure. The Shamals do seem rather stiff, which as a tubular could be a good thing, giving handling confidence and leaving the comfort and ride feel to a capable set of tubular tires. We will keep riding them hard throughout the season to see how they stand up to the mud, water, bumps, and crashes of week-in-week-out cyclocross racing and winter training. So far it looks promising. On our scale the front wheel (without skewer) weighs 616g; the rear wheel (without skewer, cassette, or lockring) weighs 836g; for a total wheel weight of 1452g, a bit over Campy’s claimed 1425g. A nice note for a Campagnolo-branded wheelset, the Shamal Ultra Tubulars are available with either the Campy cassette body we are reviewing or a Shimano/SRAM compatible option. The wheels are available now from almost any independent bicycle dealer for a suggested retail of about €940 (including VAT) or $1500 (without tax), depending on your market .