SRAM’s taken their 1x drivetrains to the road with new Force 1 and Rival 1 groups.

Essentially an expansion of their CX1 group and XX1/X01/GX mountain bike cassettes, it opens up the possibilities for gravel, cyclocross and even triathlon bikes looking to simplify the setup and save a little weight.

In fact, the CX1 group is now simply Force 1, and the Rival 1 group takes most of the existing parts and combines it with the pinned GX cassette and brand matched X-Horizon rear derailleurs. To make it work for so many types of bikes, the X-sync chainrings options now run from 38 to 54, much larger than the 44T max offered by CX1. The chainrings between the groups are similar, with a bit of additional machining on the backside of Force level rings.

The GX1 cassette is the Rival level offering, and you’d get an X01 or XX1 cassette with a Force level build. Since its up to the OEM or you to spec it the way you want it, t dealt can be mixed and matched however you (or your budget) likes. 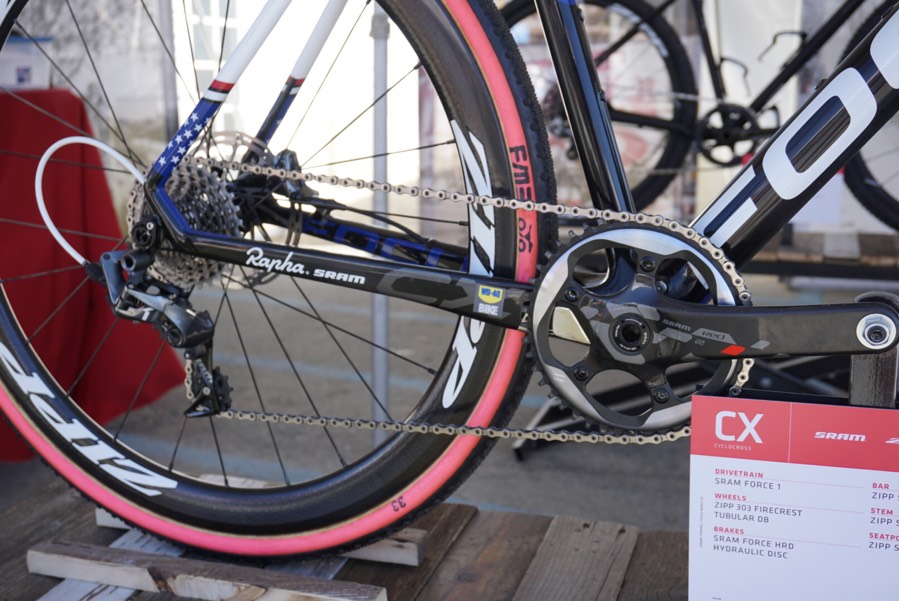 The derailleurs are offered with short, mid and long cage units, so they recommend using the clutch equipped X-Horizon derailleurs with any 1x build.

Shown above is Jeremy Powers’ cyclocross bike, showing how he’s mixed and matched parts (and a Red crankset) to make the group work for him. Below, a triathlon bike for Jordan Rapp showing it with a much larger chainring. There’ll also be S-Series parts for flat bar fitness and commuter bikes, too.

Availability runs from May through June depending on parts. We’ll update with pricing shortly.