THM worked with plastics specialists BASF over the past couple of years to develop the most technologically advanced Ordinary Bicycle we’ve ever seen. The Concept 1865 was a project to look at how modern materials would have shaped the development of the bicycle, had they been available 150 years ago at BASF’s founding. The 150th anniversary project brings BASF’s e-velocipede concept to reality.

Back on this planet THM have also refined their ultra-light Clavicula M3 mountain crankset by adding a bunch of new modular spiders from triples all the way down to XX1 versions with Boost chainlines. And not to be left out they had a prototype disc-brake road fork hanging on the prototype front triangle of AX Lightness’ forthcoming disc road bike.

Jump across the fold for some detail pics of the 1865, the full details and pricing on the M3s, and a first look at the upcoming Scapula Orbis fork… The concept bike was developed using a BASF Ultramid plastic rear wheel holding an electric motor and a unique carbon-spoked front wheel developed by THM. The frame and fork get integrated LED lighting throughout, and the saddle holds both the battery and some storage. The custom made tires use more BASF plastics with an expanded Infinergy polyurethane foam for shock absorption and an Elastollan polyurethane elastomer tread. It didn’t look rideable, but we were reassured it was, if you could afford it. In the end it was THM who built the custom carbon frame, fork, and big front wheel for the prototype. They told us that just 2 working bikes were built making the cost of each one well over €50,000 (just for their involvement), so don’t worry carbon e-penny farthings aren’t likely to be a trail access problem any time soon. Back to reality and something we as cyclists were actually happy to see, THM has worked to make their modular Clavicula M3 MTB crankset even more adaptable this year. That means that they have adopted single ring setups and tuned some of their spiders for Boost chainlines. The 397g, 740€ base carbon crankset pairs with any of seven different spider options, one of which is this Direct Mount machined 30T narrow-wide machined chainring that adds just 55g to the crank. No pricing was available yet for the single ring. 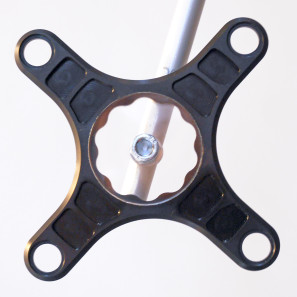 The ‘under progress’ road disc fork prototype looks to be close to production ready, and will likely become available at the same time AX Lightness announces their road/gravel disc-brake bike in the near future. The pairing of the THM fork and AX front triangle could be found in both companies’ booths at Eurobike. The full carbon Scapula Orbis fork has a claimed weight of just 285g, and will come with a 200mm long 1.25-1.125″ tapered steerer. It was designed to offer exceptionally high lateral stiffness and very high front-to-back comfort. The legs get a somewhat aero optimized shape, and a flat mount 140mm compatible dic brake mount. The axle standard looks like it will be a 12mm thru-axle. No tire was mounted, so we aren’t too sure about tire clearance, but a quick measurement suggested that 28s may be the maximum. Scapula Orbis availability is officially pegged at summer 2016 with an expected retail price of €940