Just two weeks ago we introduced you to the two new simple, powerful, and low-cost GPS computers from Bryton, but we have actually been testing out the more advanced Rider 310 since the end of November 2015. The 310 is Bryton’s take on the most simple, budget GPS data collection possible to track your rides, but backed up with enough sensors and communication capability to track more advanced metrics like cadence, heartrate, altitude, and power via ANT+, 70 in total. (Update: The Brytons do have Bluetooth LE Smart, but only for pairing a mobile phone to share data, not for attaching sensors.) For about a month and a half we’ve put aside a more complex map-based computer to see what we thought of a simpler interface…

The Rider 310 is all about trying to pare down data collection back to the simple experience of cycle computers of old, yet with modern GPS accuracy and connection to external sensors. In doing that, navigation through all of the computer’s functions has been reduced to just three buttons. The left gray button powers the device on/off with a long push, stops or pauses a ride in progress, and acts as a back button while moving though the menus and options. The big central orange button acts as the enter or OK button. It starts recording instantly when the GPS turns on and detects movement, and asks for a confirmation (OK), although it seems that even if you don’t press it the GPS will start recording automatically via its Auto Start/Stop function. The right gray button only serves one purpose to scroll through pages and data fields. It is a down button through menus and a next button from page to page. Because of its single function scrolling through the data field pages while riding is simple and easy. The $100 Rider 310 has a crisp 1.8″ LCD display that was always easy to read, and is available online from Amazon and through KHS dealers. One of the nicest features is that it automatically sets up the data pages based on the sensors connected. So no power meter detected and there will be no blank unused fields. The data fields can be customized (and at times we thought it would have been nice to have done so), but it was so nice to turn the thing on and ride out of the box that we never took the time to dig through those menus. Another huge benefit in the easy setup, was that when buying a kit that includes accessory sensors they are already pre-paired in the box. There was a small set of stickers added on the back of the box showing which sensors had already been paired. Our sample included an ANT+ heartrate monitor and cadence sensor and all we had to do was turn them it on and ride.

The small device has an exceptionally long 36 hour battery life compared to most GPS computers, mainly due to the basic screen and the lack of any mapping function while riding. It also benefits from an auto shut down feature when it isn’t moving. We actually haven’t got it below half battery even after a full week of rides, because whenever we upload files to Strava, we end up leaving it and letting charge back up a bit. At just 53g, but still a good 45x70mm (1.75×2.75″) it feels surprising lightweight. While the weight isn’t usually a big issue for a small device like this, it felt strange at first against similarly sized computers that weight 50% or even twice as much. Our Rider included a heartrate strap that was oddly way too big. While it worked for me personally with a 100cm/40″ chest in almost the tightest setting, a smaller female tester couldn’t use it without it slipping down while riding. The strap adjusted from about 75-105cm unstretched, but with about a max of 60% stretch and probably a minimum of 25% to stay in place (giving it a 94-150cm functional range) we had to double it up with some safety pins to get it to stay in place.

Looking at the mount on the back of the Rider 310, it uses a proprietary interface that is close but not the same as Garmin’s 1/4 turn mount. Its tabs are the same configuration as Garmin’s but the center piece is a bit smaller diameter and the tabs are a shade thicker. What that means is that you can use the Bryton device in a Garmin mount, but you can’t use a Garmin in the Bryton mount. That worked well for us, and we tried the Rider 310 in an older all aluminum K-Edge mount (vs. the new ones with replaceable inserts) which fit, but we weren’t very confident that it would damage the Bryton (take a close look at the scrapes on the tabs below left), but we have no such issue with plastic mounts from Raceware Direct or Barfly for example.

The Rider 310 includes one 0-ring stem mount and twists into place very easily. In its own mount it felt a bit like it might jump out, but we’ve taken it through some serious rock gardens on the mountain bike and stutter bumpy roads on a cross bike and haven’t had any issue with it staying in place. 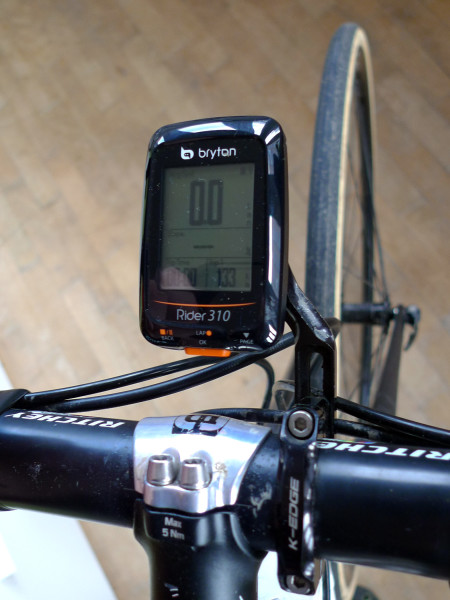 At first use the Rider 310 doesn’t feel that movement through the menus and setting is as intuitive as with market leading products from Garmin. Part of that is of course familiarity with a new interface, but also the simplified button configuration. By having only one button to move down through menus (no up), and to some degree the multi-function left button, navigating the non-riding features is a bit of a chore. But also a side effect of having everything auto setup to start, the Rider 310 didn’t require us to spend 20 minutes wading through all of the menus like most new electronics do when you first turn them on. By not doing that setup, we didn’t really take the time to get the feel for its menu navigation and instead started riding right out of the box.

So far, we still have a tendency to push that big orange button to try to start/stop rides (because it is just so enticing), but with automatic start and stop functionality it isn’t necessary. Also since no button is actually labeled as power on/off one of our testers also tries that orange button, instead of the left gray one. Our one pet peeve is probably that it would have been nice if there was some indicator text on the screen that actually said/signaled what each button did in any particular mode. It is (mostly) printed right there on the case, but this is the only place where the intuitive function seems lacking.

What we do miss is even a basic breadcrumb track map display. While the Rider 310 definitely benefits in its simplicity by eliminating mapping (with the resulting excellent battery life), we do sometime like to be able to upload a .gpx file to a device even just to for the ability to follow a squiggly line track when exploring new areas. That clearly is a different use style, but it may have been possible to add to a simple device like this without much compromise.

That said, the actual function of the computer is excellent, and simplicity is its best trait. It is the fastest device we’ve used to acquire a GPS signal here in Europe. It effectively connects instantly. It keeps accurate distance data, comparable to other dedicated GPS devices we use. And its altitude data collection appears more accurate than last basic GPS we’d used (comparing for example with Strava and a mainstay Edge 800. Add in the automatic recording, the fact that it autosaves .fit files when it shuts off, then simply connect it to a computer as an external disk via micro USB cable to upload, and it is hard to argue the performance for the money of the device.