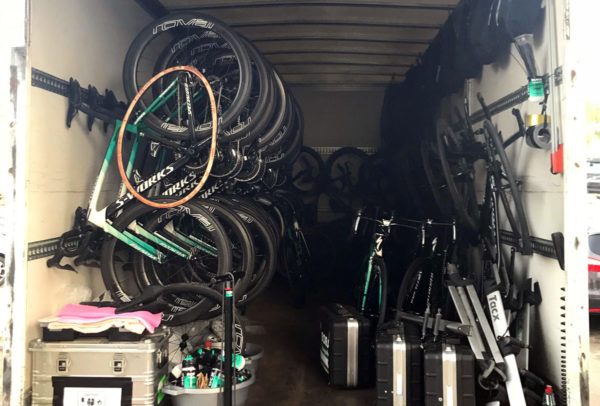 At this year’s Giro D’Italia start in Israel, the Bora Hansgrohe team had three different Specialized bikes at the ready, though their mechanics said the flatter roads around Tel-Aviv, Jerusalem and the desert leading to Eilat would be better suited for the aerodynamic Venge. So, that beautifully simple green paint schemed Tarmac would remain shelved in the box truck until they got back to Italy. For the most part, the Venge and the Shiv TT bikes were rolling stock hardware and frames. They were sticking with rim brake models all around. While other brands were running Lightweight rear disc wheels and sometimes trying to mask that fact by putting their own decals on them, Bora Hansgrohe said these were, in fact, Roval rear discs. And they weren’t the only Specialized sponsored team to have them. The tires look like Specialized Hell of the North tubulars, but with the tiny nubs completely worn smooth. Chainring selection was a 55/42 combo. Check out the team at Bora-Hansgrohe.com. It should come as no surprise that Belgian pro cycling team Lotto Soudal rides Ridley, using the Helium SLX for regular days and the Dean TT bike for time trials. While most of what we’ve covered so far have been Shimano sponsored teams, these guys are running Campagnolo. If you can read my name… Actually, this probably helps the drivers to more quickly identify whose bike they need to pull down. Campy Records and Super Record parts were fitting to SRM Power Meters. Chainrings on the bikes ranged from 55/42 to 56/44 on the ones we noted. The Ridley Dean uses their split fork legs with slits to reduce air turbulence around the spokes. Not all of the bikes had the power meters. Victor Campanaert gets a special paint scheme for being the 2017 European Time Trial Champion. Check out the team at LottoSoudal.be.

Check out every team’s bikes from the 2018 Giro here!