If you could have a helmet that was safer, more aerodynamic, or better ventilated, which would you pick? Now what if you didn’t have to just choose one? That of course, is the goal of every helmet manufacturer. The holy grail of helmet design if you will. And with the introduction of the new Aether MIPS, it looks like Giro is one step closer to realizing that goal.

Over the past few years, MIPS has turned into one of those industry buzz words, but for good reasons. The company has been instrumental in increasing awareness of (and helping to reduce) the effect that rotational motion has on the brain during impact. Along the way, many different helmet brands have integrated MIPS technology, but Giro has taken it above and beyond with their own advanced testing in house. Before they ever started down the path of MIPS integration, they independently verified MIPS claims using their own test rigs over the course of two years (Giro has three tests just for rotational impacts). And while MIPS was as one point owned by the same parent company as Giro, Giro points out that there is no longer any financial stake involved – if there’s a better technology out there, they’ll take it.

But for now, Giro claims that there is nothing better out there, and that MIPS is ahead of the curve when it comes to managing rotational energy. Now with more than 20 years behind them, MIPS is yet again raising the bar with MIPS Spherical. First introduced on the Avance MIPS ski helmet, the bike industry saw the first use of the technology in the Bell Super DH, but for road biking, Giro is first. You could almost think of a MIPS Spherical helmet as two helmets in one – like a ball and socket. Instead of using the low friction layer that is attached to the inside of the helmet with elastomers, the elastomers are hidden between the two layers of EPS foam which allows the two halves to move independently of each other.

Critical to the design is the ability of the system to provide 10-15mm of relative motion between the head and the helmet while under significant point loading. All of this happens in about 1/10th of the time it takes you to blink. One of the benefits to MIPS Spherical, is that when it’s integrated into the helmet, you can include massive vents without a liner to get in the way. However, to build such a light helmet with gaping holes required some special construction techniques. The foam itself is actually a dual-density Nanobead EPS which uses a finer bead to get into smaller spaces. This was required to create the more complex shape of the helmet, but it also helps absorb a wider range of impacts. To reinforce the helmet between the vents, Giro uses a new material they are calling Aura reinforcement. The shatter-proof ABS material is lighter than carbon fiber and just as strong, so it seems like a good choice.

The outer shell is a 6 piece polycarbonate “Hardbody” which wraps around the inmolded EPS foam. Note that the Giro logo is actually molded into the shell – not just a sticker. Of course aerodynamics are important as well, which according to their own wind tunnel test results, the Aether MIPS stacks up pretty well considering its closest competition are actual aero road helmets. Ventilation was verified as well – Giro’s Therminator test rig clocks the Aether at a full 2° cooler than the Synthe, which was already a pretty well ventilated helmet. In addition to the safety, aerodynamics, and ventilation, the helmet also features a few details like eyewear docking ports up front, CoolFit Anti-Microbial padding, and a new RocLoc 5+ Air fit system. The fit system not only has the usual three position up and down, but you can also independently adjust the left or right side of the cradle with three positions each. 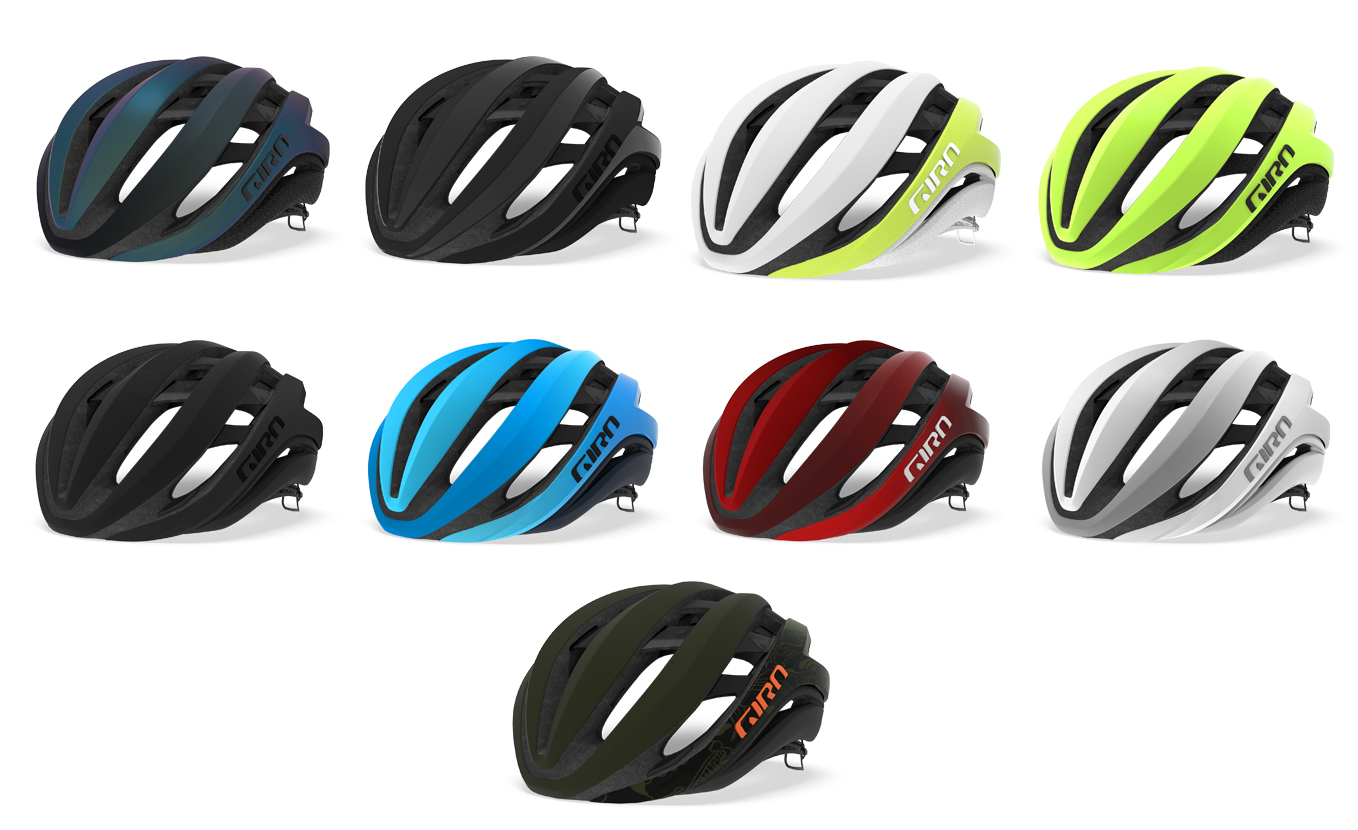 Once the Aether is available in August, the helmet will have a $325 retail and will be available in 9 colors including three limited editions. Our CE rated test sample in medium came in at 269g on the scale, though the front pad is not the production piece. Claimed weight on a CE Rated medium is 250g. It’s that time of year where it’s so humid that when I walk outside to take pictures, my camera immediately fogs up for 30 minutes. Perfect helmet testing weather. Well, perfect if you want to see if a helmet lives up to its claims of being well ventilated. And to that, I can say that the Aether absolutely is extremely well ventilated, but just as important, the helmet is super comfy. To be fair, Giro helmets have always fit my squarish head quite well, and this one is no different. The Roc Loc 5+ air makes it easier than ever to get the perfect fit, and the system is as good as ever. While the straps lack any sort of cam lock for the ear piece, they’re easy to adjust to get them in the right spot.

Considering the Aether is a two part helmet, it is surprisingly low profile – barely looking any different than your average helmet. As for the MIPS Spherical, I don’t plan on testing its efficacy, though I can say that while out on the road the two pieces stay still – there’s no indication that the helmet is actually two pieces connected with high tech rubber bands. As long as the helmet doesn’t develop any creaking down the road from the two pieces rubbing together, MIPS Spherical seems like a huge step in the right direction. At this point, it’s almost guaranteed that when Giro comes out with a new helmet it’s going to be good, and the Aether continues that trend. It looks great, vents like there’s nothing there, and claims to have great aerodynamics and next level safety. Other than the price, what’s not to love?