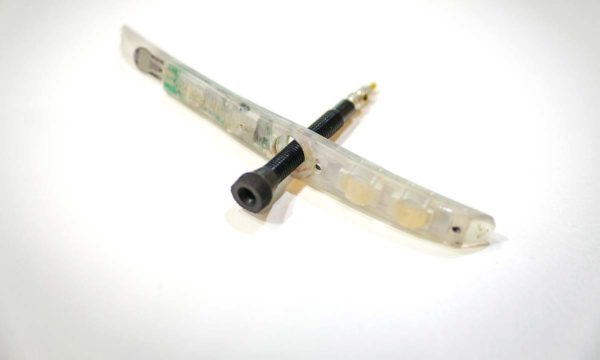 First shown as an early concept last Eurobike, Hutchinson is closer to launching their wireless tire pressure sensor. While the company is still a ways off from full production, the sensor is getting much closer to the final version and it was fully functional on display. Designed to be used in all rim widths from road to gravel to MTB and flexible to fit all wheel sizes, the sensor is meant to work with both tubes and tubeless tires. In order for that to work, there are two pressure points – one with a physical point that the tube would push against, and the other with a small hole that measures the air pressure. We’re told that the sensor is sealant friendly and won’t be clogged no matter what, and while the sensor will include valves, it should be able to be run with most tubeless valves. Capable of measuring down to 1/10th of a PSI, the sensor is Bluetooth and ANT+ compatible for use with the smartphone app or future integrations. The app will allow you to set up multiple bikes, and it will give you alerts for things such as small leaks, current pressures, heat warnings, etc. Aiming for a launch in Q1 2019, Hutchinson says a pair of sensors should cost around $100. The Skeleton is an all new fast rolling XC race tire from the French manufacturer. Blending the fast characters of Hutchinson’s Cobra & Black Mamba. We got an early look at the tread back at Sea Otter, but now the details get official and it is available now. It will be available in a black wall in 27.5″ & 29″ x 2.15″ only, and in both Tubeless Ready and tube type clincher constructions. As for the more rubbery prototypes in their booth, Hutchinson had two new tan wall or skin wall tires that will soon join the line up. On the mountain bike side, the Skeleton is a 29 x 2.15 fast XC tire with a tubeless ready casing. The Override will also be available in tan wall, though it is a little darker thanks to the Hard Skin layer in the sidewall for increased protection from cuts. To be available in 700c x 35 or 38mm, the Override has a file tread center with slightly more aggressive inverse tread on the sides.